New Orleans’s Best Desserts and Where to Find Them

New Orleans is known for its nightlife and hearty cuisine, but did you know there’s a wealth of iconic desserts the city has to offer? Here’s the scoop on New Orleans’s sweetest treats.

You’re sure to find two things in New Orleans: great music and even better food. From rich gumbos to overflowing po’boys, the options are endless—and crazy delicious. But leave some room for dessert; New Orleans saves the best for last with its delicious, innovative sweets.

From ice cream and snowballs to pies and late-night beignets, you’ll have no problem getting your sugar fix at these local spots, new and old. Here’s where to find the best treats in New Orleans. 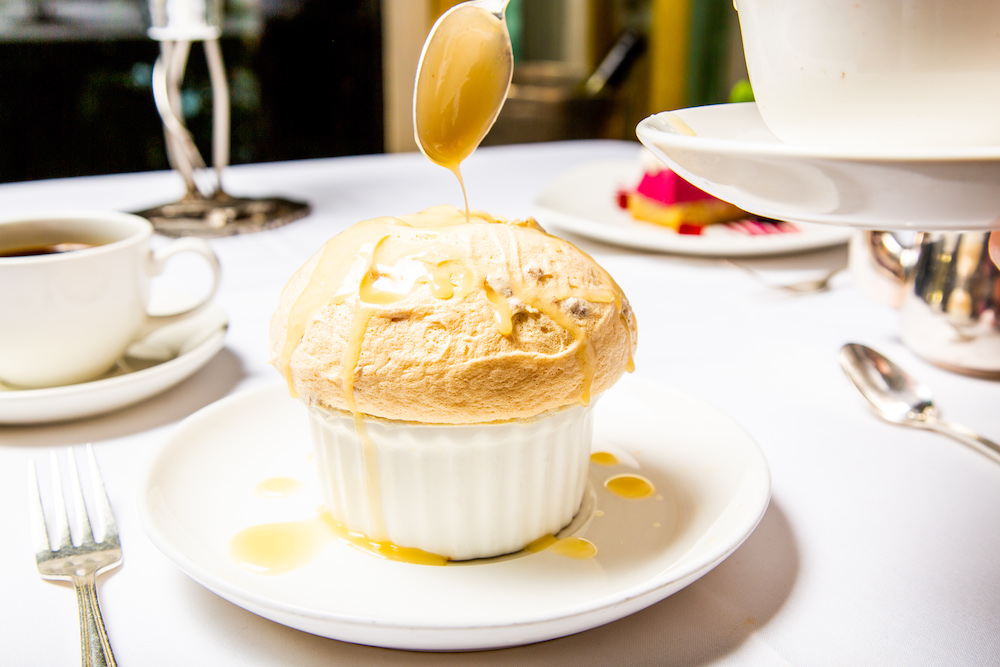 The Queen of Creole Desserts herself: bread pudding at Commander's Palace. Photo courtesy of the restaurant. 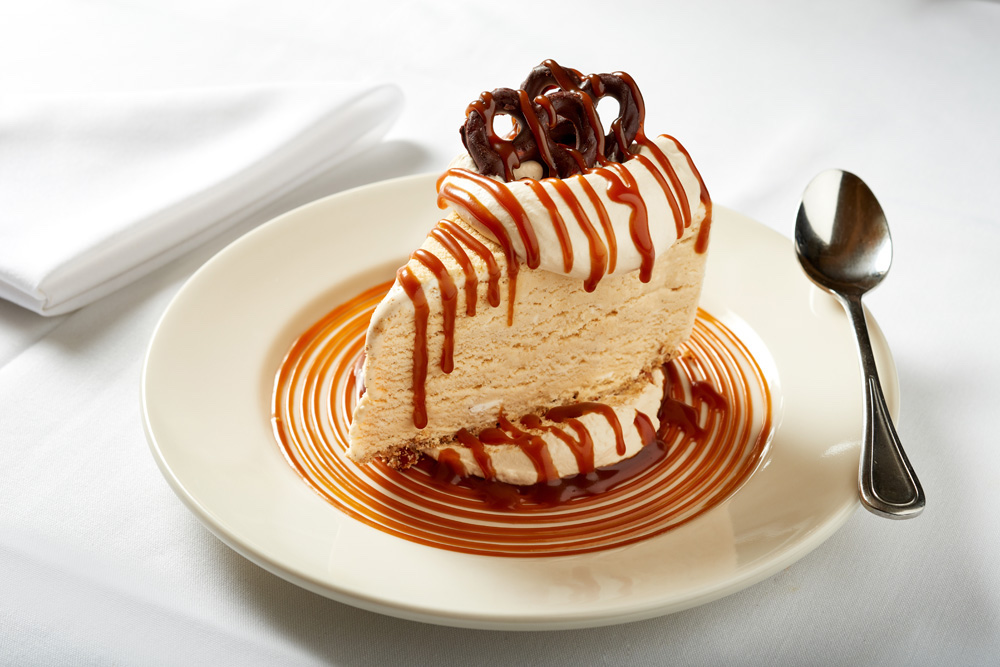 The Salty Malty Ice Cream Pie at GW Fins is the perfect balance of sweet and salty. Photo courtesy of GW Fins.

Few restaurants in New Orleans are more iconic and beloved than Commander’s Palace. A jacket and dress affair, it’s the perfect place for a special occasion, or even a raucous Sunday jazz brunch set in the Garden District.

Much like their name, their Creole Bread Pudding Soufflé is an institution. This gourmet take on the classic New Orleans dessert is called “The Queen of Creole Desserts” on their menu. The secret bread pudding recipe with egg-white meringue requires a 20-minute pre-order. Finished tableside, the waiter will break the velvety dome and pour warm, sweet whiskey sauce down the center.

Housed inside a stately Victorian mansion and renovated to stylish perfection, The Chloe serves playful twists on Creole favorites in the kitchen while guests sip fresh cocktails by the heated pool.

Nostalgia sets in with The Chloe’s signature dessert, the ice cream sandwich. No, this isn’t the ice cream sandwich you fished out of the vending machine in your school’s cafeteria. These are two homemade praline crunch cookies: chewy yet thin, the perfect vessel for the brown butter ice cream sandwiched between. On top, a pinch of sea salt is added to heighten the sweet and salty combination on your tongue. 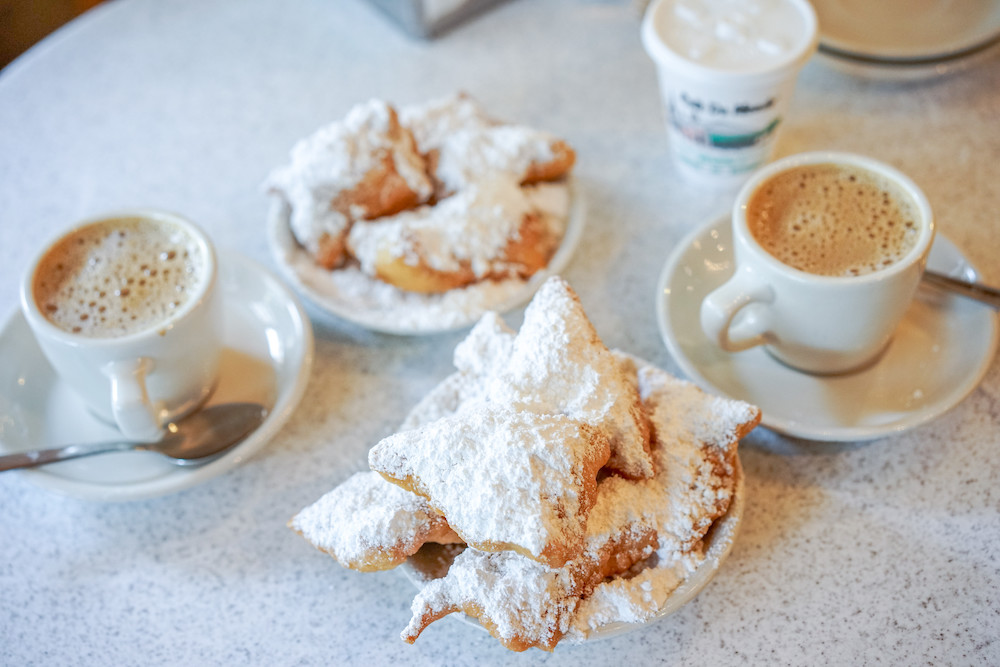 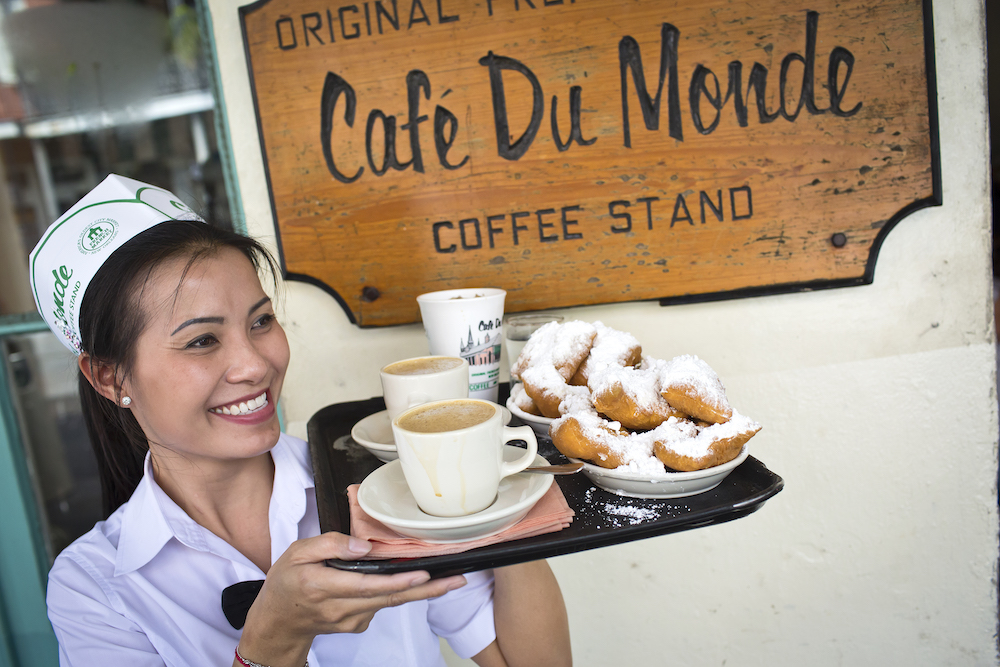 You can't go wrong with a cup of coffee and beignets at Café Du Monde; it's a New Orleans tradition. Photo by Paul Broussard.

It doesn’t get more iconic than the legendary beignets at this Big Easy institution. Served steaming hot, these fluffy dough bites are covered in so much powdered sugar, a coughing fit is inevitable—and well worth it. A dessert stalwart, Café Du Monde’s beignets are a fluffy bite of New Orleans itself.

Owned by the Fernandez family since 1942, the menu has remained largely unchanged except for a few iced coffee additions in the 80s. Most importantly, “The beignet recipe changed in the late 1960s when we introduced the boxed beignet mix so people could make the beignets at home,” says Vice President of Café Du Monde, Burt Benrud Jr. “The recipe has remained the same since then.”

On a hot, humid Louisiana day, there’s nothing better than a cooling cup of custard. Salvatore Caruso, also known as Ice Cream Sam, started experimenting with the frozen confection in 2019. After battling a 17-year-long heroin addiction, Caruso got sober and began learning about the ice cream process from a pastry chef at a restaurant he was bussing tables at. “I was eating ice cream every day to educate myself on the nuances of French-style ice cream,” he says. “Then I purchased my own ice cream machine and began making my own flavors.”

Born and raised in New Orleans, he creates locally inspired flavors like “Creole Cream Cheese” (with cream cheese made in-house), “Beaucoup Butter Pecan” and “NOLA Dreamsicle” (made with local satsuma oranges). Ice cream fanatics can buy pints on Thursdays and Fridays from 1-6:30 p.m. and Saturdays and Sundays from 1-5 p.m. on the back porch of Blue Dot Donuts on Canal St.

A Cultural Engineer’s Guide to the New Orleans Music Scene → 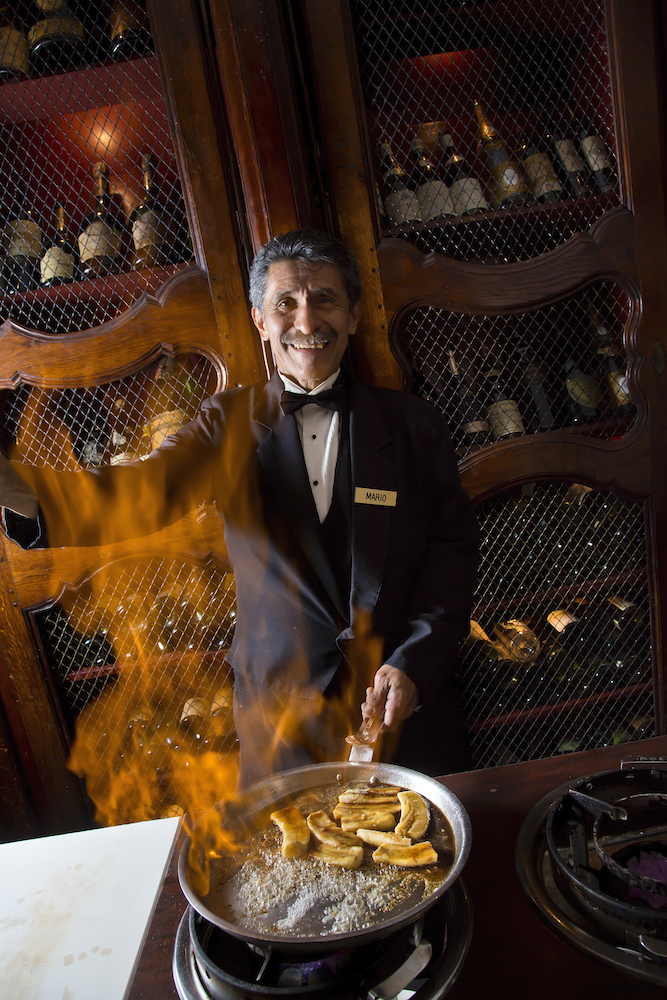 Bananas foster flambéed tableside at Brennan's is as old-school New Orleans as it gets. Photo by Todd Coleman. 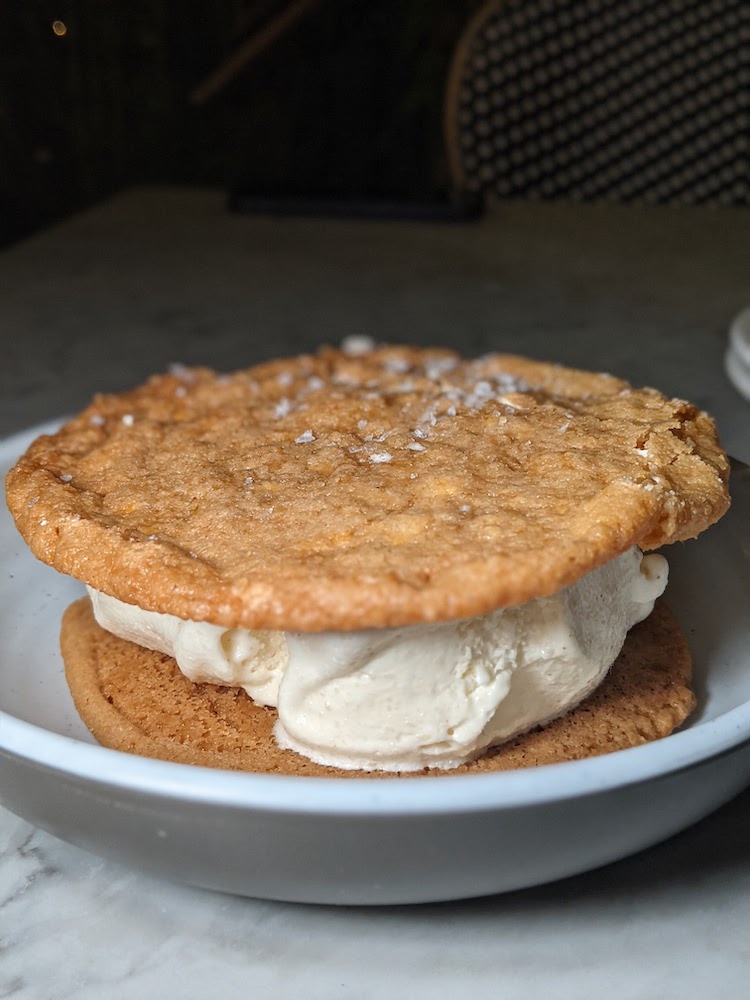 The Chloe's ice cream sandwich is a reimagined take on a classic, with crunchy praline cookies and brown butter ice cream. 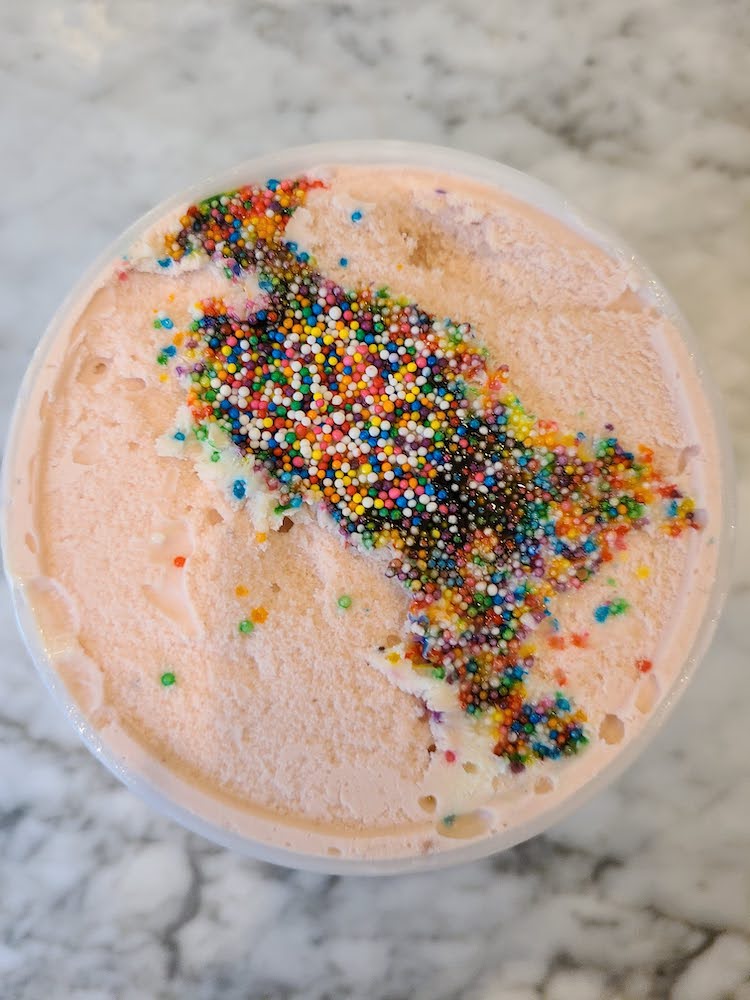 At Laozi, you can take home pints of their homemade ice cream. Pictured here is their Birthday Cake flavor. Photo by Lorin Gaudin.

The Crescent City is synonymous with bread pudding. You can find it on just about every menu in the city, each with its own spin. At Lil Dizzy’s Café in the Treme, their combination of day-old French bread, eggs, milk, butter and sugar is a family recipe. “We began serving it in our restaurants when we opened Eddie’s Restaurant in November of 1966. The recipe was my grandmother’s, and she was one of the original cooks at Eddie’s,” says Wayne M. Baquet Sr., the founder of Lil Dizzy’s Café.

According to Baquet Sr., French and Spanish colonizers brought the dessert to New Orleans in the 1700s. He says, “The recipe evolved in New Orleans with the use of stale French bread, which makes it uniquely New Orleans.” Served warm with canned fruits and rum sauce, it’s a traditional New Orleans bread pudding through and through.

A beloved French Quarter restaurant since 2001, GW Fins specializes in sustainable Gulf seafood. But their signature dessert will elicit a reaction that rivals the iconic When Harry Met Sally restaurant scene (you know the one).

The Salty Malty Ice Cream Pie has a thin, brown butter pretzel crust with a generous scoop of homemade caramel ice cream and a hint of salt. On top is malted whipped cream, two chocolate-covered pretzels, and a caramel drizzle. It’s a genius blend of salty and sweet that’s become a quintessential New Orleans dessert.

Inside the historic Pontchartrain Hotel on St. Charles Ave is a whimsical dining experience that awakens all the senses. Its eclectic and alluring over-the-top decoration means you’re in for a good time and an even better meal.

The Mile High Pie is, without a doubt, the most photographed food in the building. Created in the 1950s, this towering wedge of frozen dessert has gorgeous layers, good enough to elicit a Paul Hollywood handshake. Made with a lofty slice of chocolate, followed by vanilla and sky-high peppermint, it’s topped with a fluffy meringue and an artful drizzle of chocolate sauce. 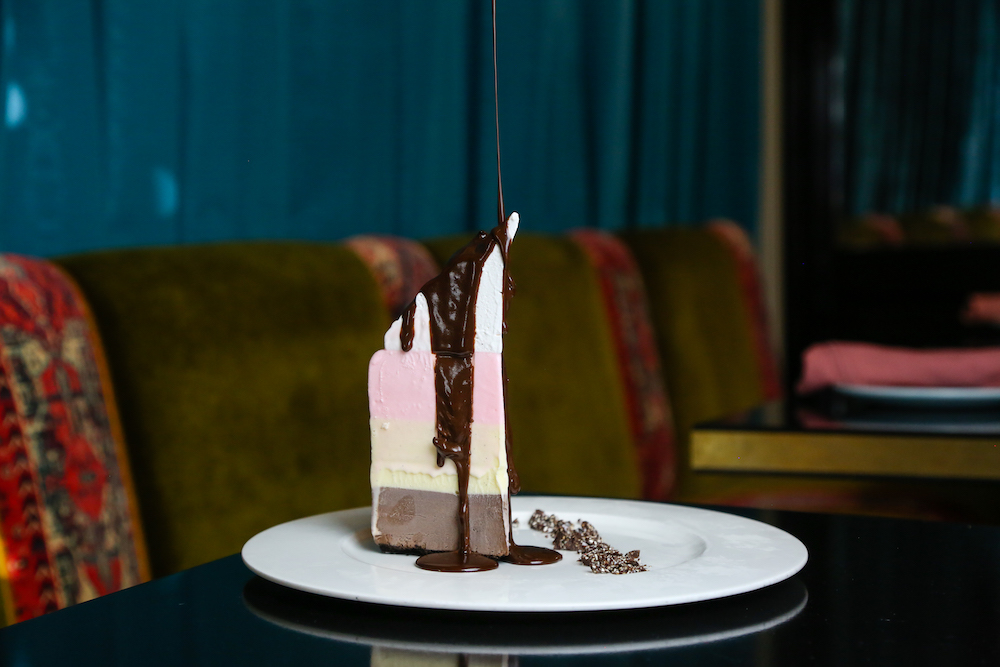 The Mile High Pie is not your ordinary ice cream cake. Guaranteed to wow the entire table, this dessert will make you dream in Neapolitan hues. Photo by Randy Schmidt.

Marlon Williams combined Mardi Gras and bread pudding (two things New Orleanians can’t live without) to make one killer dessert. “Back when I was selling plates from home, I had a Mardi Gras-themed menu,” he says. “A customer favorite was our bread pudding, so I came up with a king cake version.”

His King Cake Bread Pudding base is made with day-old donuts from a local shop and King’s Hawaiian Bread. A homemade custard and cream cheese frosting is the secret to keeping it moist and flavorful. On top is sprinkled sugar in Mardi Gras colors, shimmering like beads. “Nothing says New Orleans like taking an already decadent dessert and sprinkling colored sugar on top,” says Williams. Although their menu changes weekly, customers can expect to find their signature bread pudding on Chicken’s Kitchen’s Thursday and “Fryday” menus, served in the New Orleans suburb of Gretna. When in doubt, follow their social media for availability.

For when the slow, painfully hot August days in New Orleans call for an icy treat, voilà, there is the snowball (sometimes spelled snoball). A Central City mainstay, Red Rooster has been slinging snowballs year-round since 1977.

Natasha Ramsey, co-owner of Red Rooster, says, “Snowballs are a New Orleans tradition that dates back to the 1930s when the first ice shaving machines were created.” Today their snowballs are beloved for their soft, fluffy shaved ice, a variety of syrups (including their most popular, strawberry), plus toppings like gummy bears, condensed milk, and ice cream.

The home of the famous Bananas Foster, Brennan’s has been flambéeing fruit tableside since 1951. At the owner’s request, the restaurant created a new dish using bananas that were being shipped in from Central and South America in boatloads.

Named after Richard Foster, a good friend and chairman of the New Orleans Crime Commission, it’s the restaurant’s most popular dish. The combination of bananas, brown sugar, butter, cinnamon, rum, banana liqueur, and locally-made vanilla ice cream is as old-school New Orleans as it gets.