An Expert Forager Weighs in on the Mushroom Boom

Dried specimens from a walk in the woods with Chris, foraging expert and local Vermont legend.
DispatchMargie DillenburgTimmy Shivers

One writer moved away from the city in search of clarity and discovered a community of mushroom foragers.

The last decade of food trends has completely scrambled the vegetable pecking order. First there were Brussels sprouts, the fear of all children who grew up in the 50s, which surprised us all by appearing on virtually every menu circa 2010. But perhaps the biggest upset of all was watching cauliflower climb the charts. It somehow replaced pizza crust, mashed potatoes, gnocchi, and even buffalo wings. Who would have thought?

We may never have anticipated cauliflower’s redemption arc—but that is so 2019. 2022 is ushering in a whole new food trend—the mushroom. Mushroom coffee, protein powder, umami seasoning, and eye cream are now products you can find at any Whole Foods. My most recent shock was accidentally bringing home mushroom dairy alternative. Mushroom milk is as unlikely as the cauliflower pretzel.

It’s not just the walk through the grocery store aisle that will indicate a mushroom boom, but a browse through your streaming platforms and social media. Mushrooms, once the domain of eccentrics, are the subject of a new Nicole Kidman series on Hulu, plus two recent blockbusters about truffle hunting. You can find travel blogs gushing about hunting morels in the spring, plus mushroom and wine pairing guides. As a foodie, thrill-seeker, and a COVID refugee in southern Vermont, I decided to hop on the mushroom wagon to see where it took me. Taking on this new interest led me to meet one of New England’s foremost foraging experts. 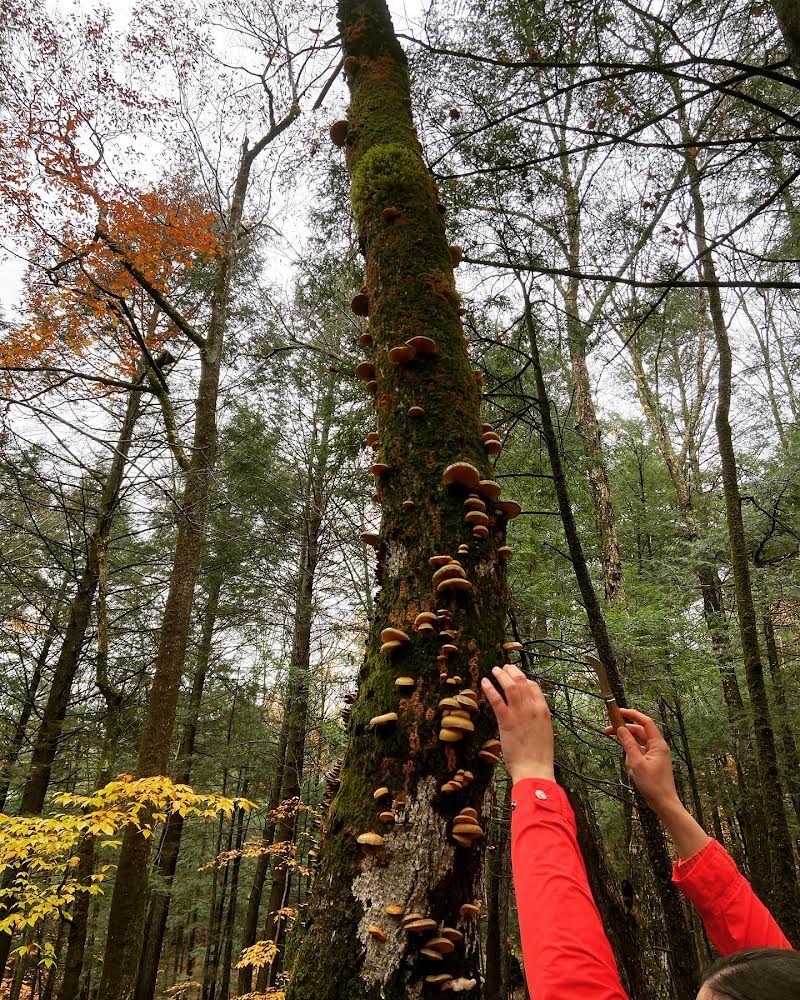 Picking your own mushrooms in the woods might sound tempting, but it's imperative that you positively identify any specimens before touching them.

Back in the first few months of lockdown, like many others I began wondering why I was paying city prices while being cooped up inside indefinitely. I found myself on Zillow more than Tinder, and it only took me a few weeks to become a COVID cliche. I fled the city and bought a 200-year-old farmhouse in southern Vermont. I moved to Townshend; a sleepy little town of maybe 500 people, most of whom reside in the assisted living center in town. I came here to capitalize on the outdoor space, the low mortgage rates, and the fantasy of country life. In my head, I was the protagonist in the 80s romcom reboot of the Diane Keaton classic, Baby Boom. But just like Ms. Keaton, I soon discovered that adventure in Vermont was not easy to come by—adventures, like mushrooms, had to be courted. They had to be earned through weathering a few Vermont winters. I wasn’t going to get targeted mushroom foraging walk adverts on Instagram; I had to discover them myself. So I turned to a local newsletter, The Front Porch Forum, and to farmers’ markets to get an education on local mushrooms.

After four months of being a farmers’ market regular and cozying up to the local foraging communities, there was one local resident I just had to meet. They were the first name on the tongue of every forager in the area. I soon came to find out that this local legend, Chris, could not be matched in knowledge or enthusiasm.

Chris is straight out of central casting for the lead love interest in the made-up-in-my-head romcom. Thirties, handsome, outdoorsy, humble, and Vermont-rugged. Chris spoke about the local ecology like it was an 18th century French poem. He carried a beautiful handwoven basket, and a large, sexy knife. I found out the basket was essential for its gaps, which allows mushroom spores to breathe. 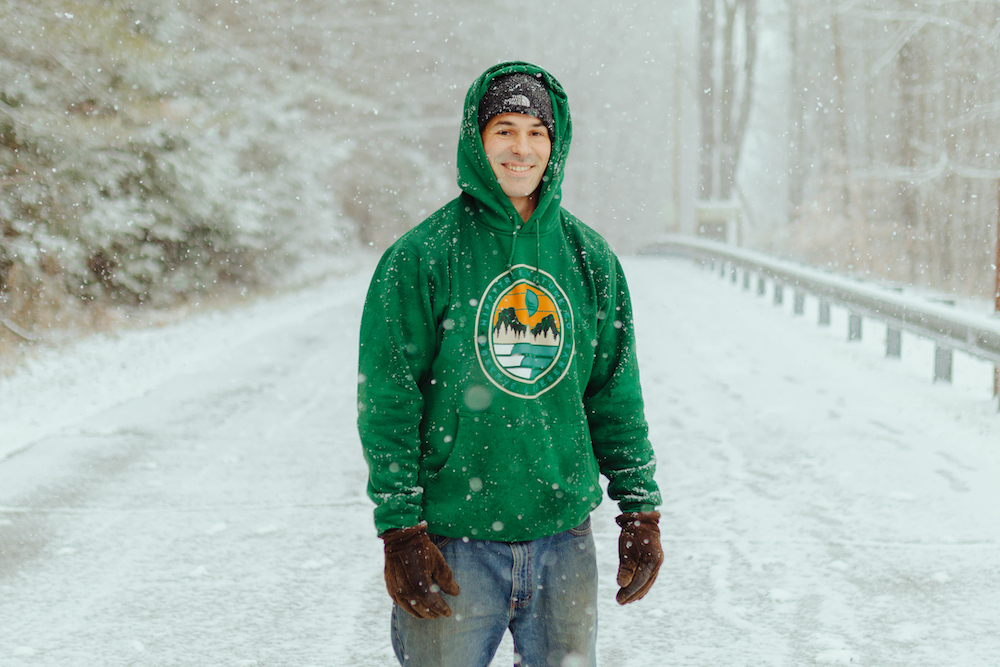 Chris, a shy and humble guy reluctant to be in the spotlight, describes himself as a lifelong “kid who flips over rocks.” 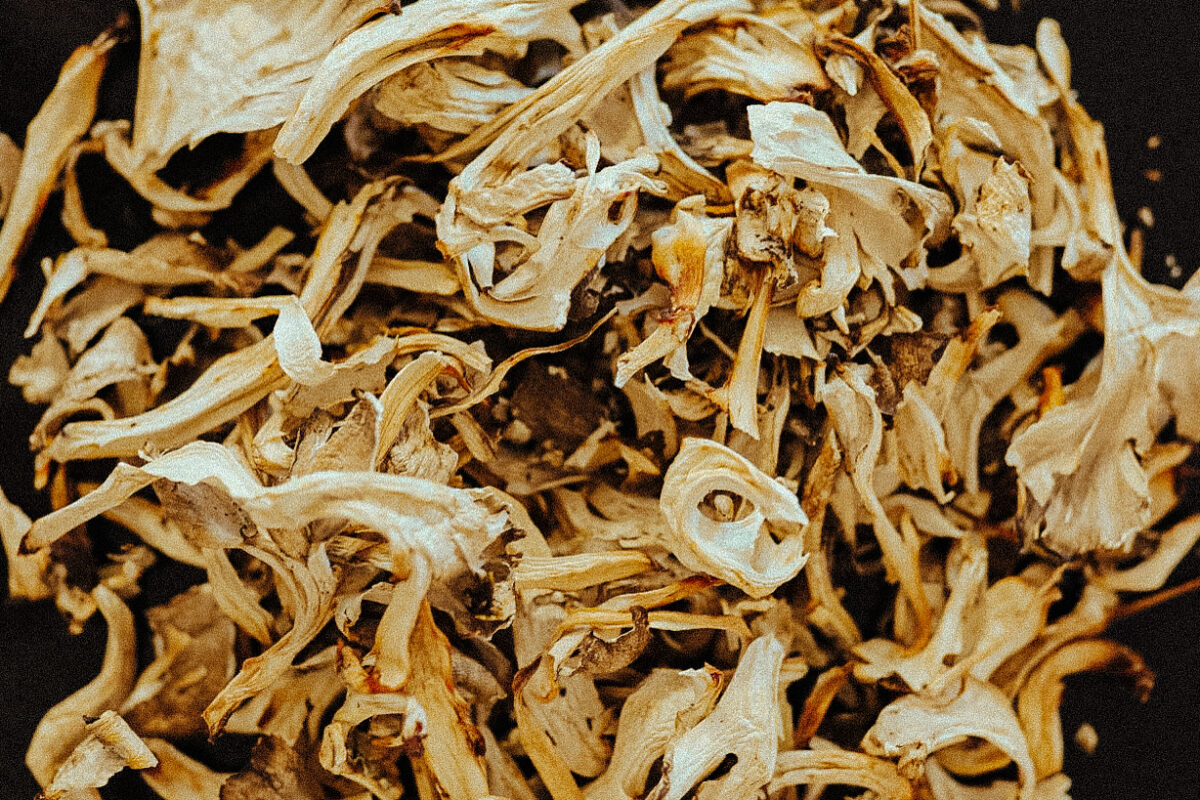 These versatile dried specimens can be used for superfood teas, soup bases, and any dish that needs an extra bit of umami.

One perfect Saturday in October, myself and two other guests walked with Chris through trails he could have navigated blindfolded. He pointed out trees as indicators, micro-climates, and “companion” plants, which all told him where he could uncover entire mushroom colonies. Like A Perfect Mind or Neo in the Matrix, you could tell he was processing millions of data points at a time.

Chris, a shy and humble guy reluctant to be in the spotlight, describes himself as a lifelong “kid who flips over rocks.” His education on the subject was unlikely and completely self-taught. He didn’t need to, but wanted to do these walks because of his obsessive love for nature, and the desire to show off its majesty to anyone who would appreciate it.

Chris’s love for the forest started with his grandmother, a second grade teacher. She would send four-year-old Chris out in the woods looking for monarch caterpillars for her lessons. He’d come back with different specimens, learning and iterating every time she told him, “close, but not a monarch.” He took to it swiftly, and his capacity to recognize ecological clues was infinitely faster than his ability to pick up on phonetic context clues in any textbook. School exhausted Chris. Diagnosed with dyslexia early on, he ended up dropping out after the 9th grade. Eventually, he went back to high school on an independent study credit. His assignment was to use an acre of his parents’ property to categorize the local wildlife. It was during that semester that he learned about John Muir and Thoreau—that there were other people like him. He found his niche and took that as permission to continue to be the boy who’d flip over rocks for the rest of his life. 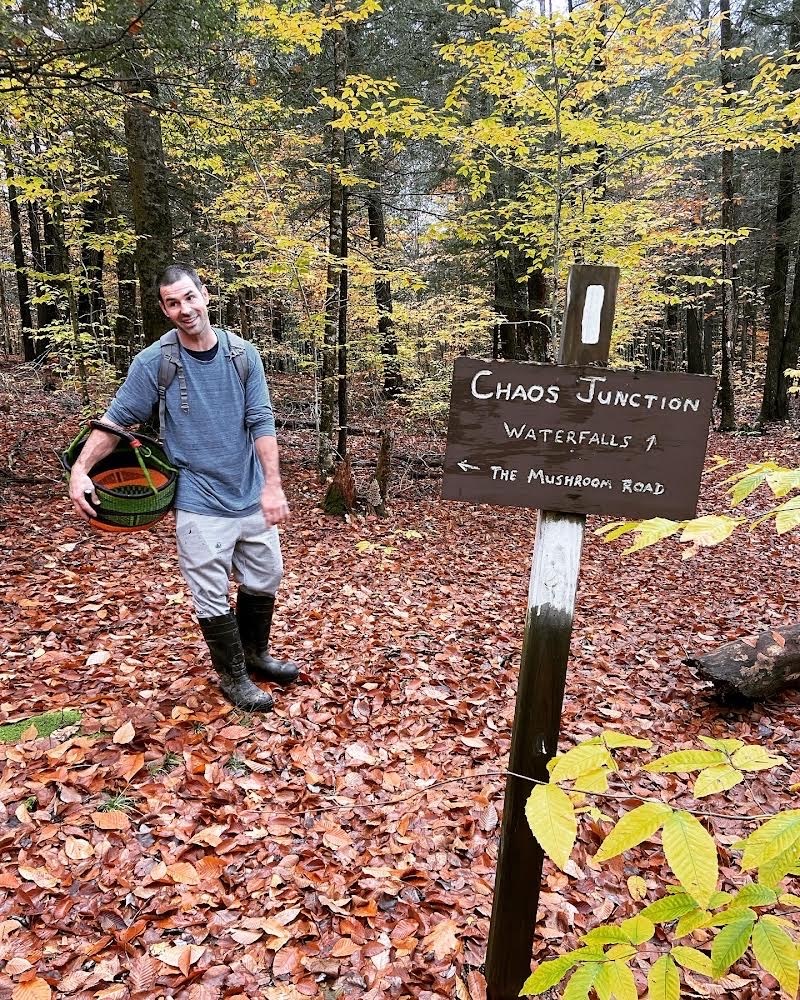 “Mushrooms were the final piece for me,” Chris explains. “They are like the connected tissue of nature, working with temperature, ecology, plants, decomposition, manure, insects—everything.”

In the last year, there has been a staggering increase in the number of requests for him to identify wild mushrooms and take interested parties on foraging walks. He attributed the mushroom boom to people like me—flatlanders escaping COVID restrictions and discovering what locals in Vermont already knew—that nature gives us everything we need, as long as we slow down and treat it with respect.

“Mushrooms were the final piece for me,” Chris explains. “They are like the connected tissue of nature, working with temperature, ecology, plants, decomposition, manure, insects—everything. When you start with all that other foundational knowledge, you see how mycelium uses it all in a mysterious way, turning dead things alive, and vice versa. It’s beyond comprehension.”

Sadly for the ending of the movie I was directing in my head, Chris has a lovely girlfriend, yet he did seduce me—into loving my local trails. Needless to say, now I’ll gleefully take local mushrooms and put them on my glutenous non-cauliflower pizza crust.