What MUNA Packs in the Midst of Their Second World Tour

MUNA continues their tradition of being unapologetically themselves—this is what they take with them along the way.

Both of MUNA’s New York City shows sold out. The first show fell on Mental Health Awareness Day; the second on National Coming Out Day. The serendipity wasn’t lost on the band, whose queer and vulnerable music has arrived at such a politically potent time in history. Katie Gavin, lead singer of the Los-Angeles based band, recognized the significance of both days during the concert: Coming out is a process, and so too is making the conscious decision to be authentic and open, daily.

The band has always been radical. Their first album in 2017, About U, made for a bold debut while garnering a particular political resonance. Their second, Saves the World, feels softer and at the same time, more hopeful. This go-around, they’re showing us the power of an inward practice as much as an outward. In short: To save the world, you have to save the self. 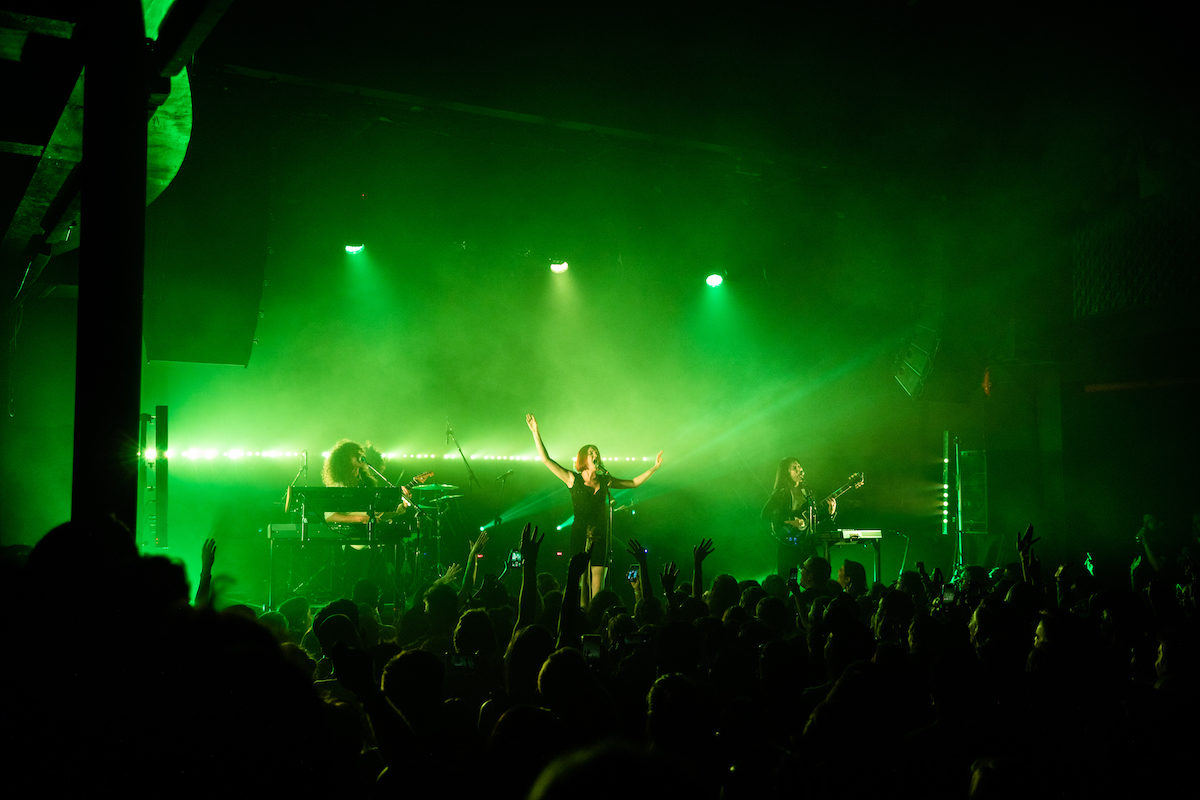 MUNA at their sold out show at the Music Hall of Williamsburg.

“Accept where you are in this moment, and also try to change and grow. Earnestly. Because that’s intimately connected to building relationships. It’s about love and trying to make connections with people. That work is treacherous, and it’s so important,” said Katie, before introducing their final song of the night at their second show in Williamsburg, Brooklyn. “This song is called, ‘It’s Gonna Be Okay, Baby,’ and I hope you sing it with us.”

We met MUNA, comprised of Katie Gavin, Josette Maskin, and Naomi McPherson, in between their two N.Y.C. shows to hear how their second world tour was treating them. 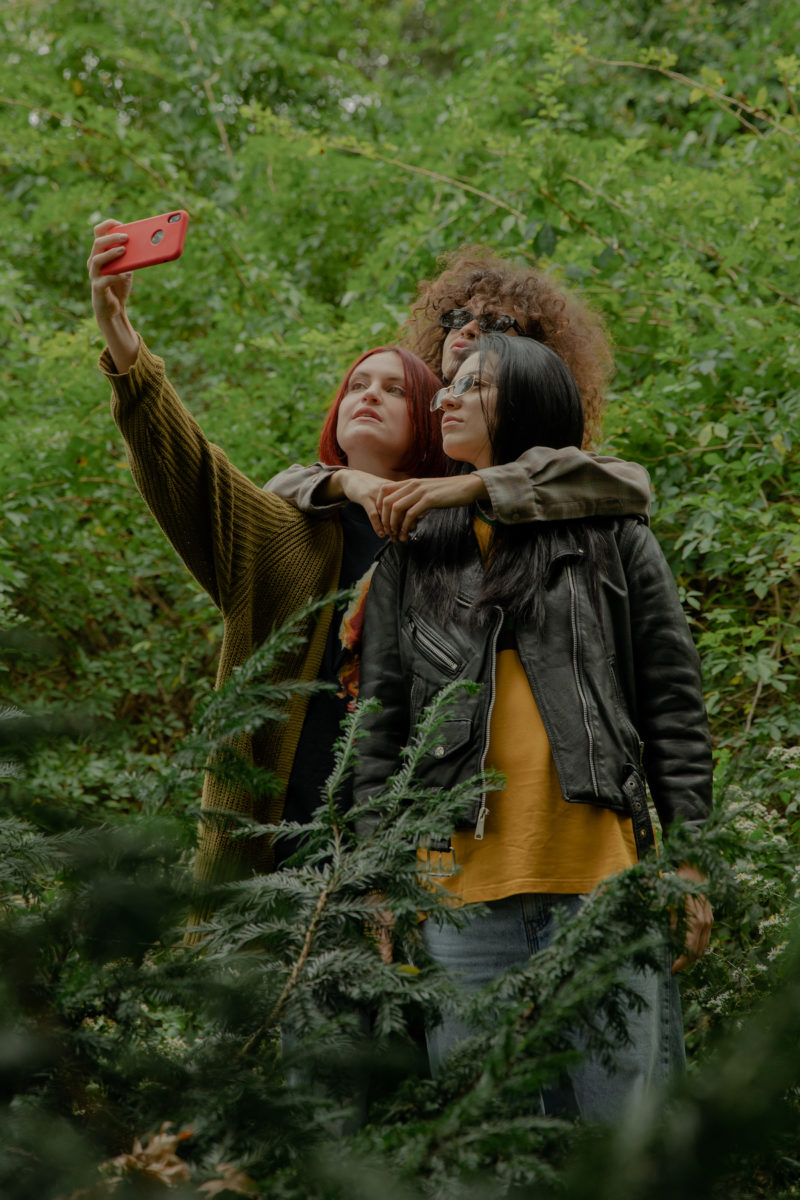 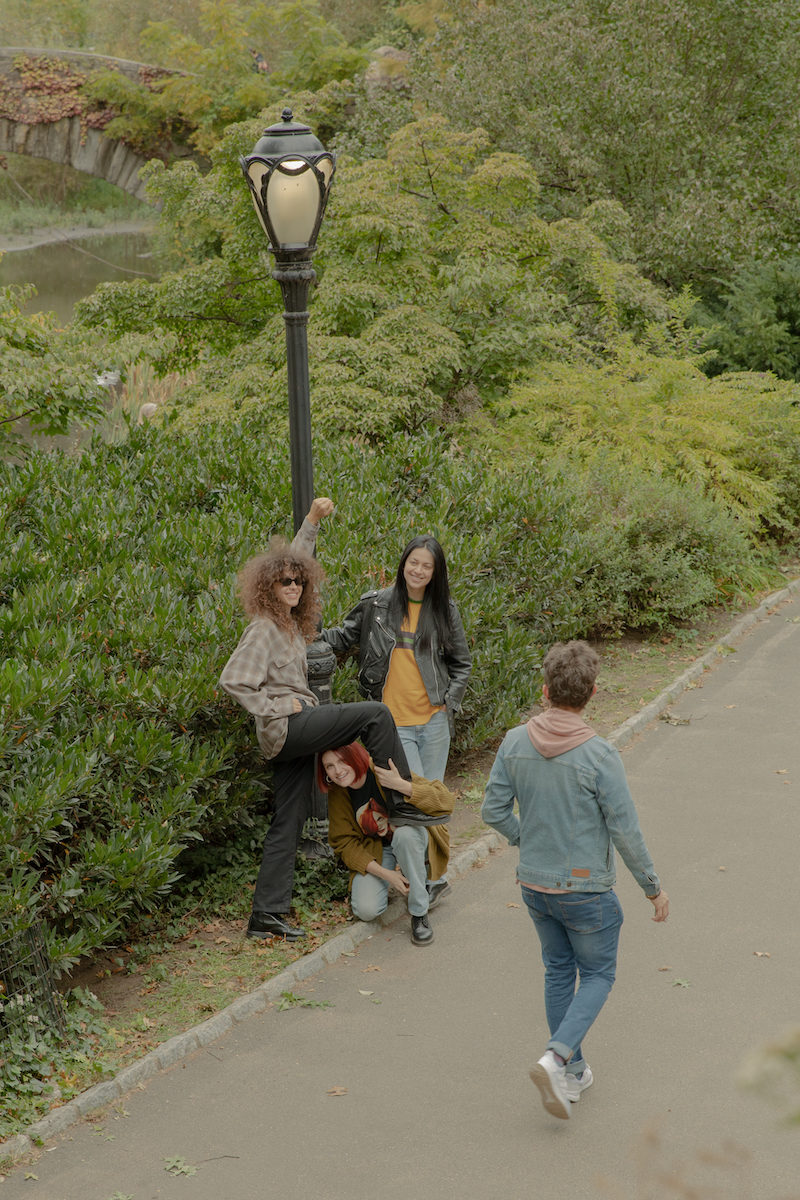 MUNA monkeys around in Central Park.

The Best Part? Fans and Food.

Josette: Touring can be hard because we’ve gotten used to having our own routines and schedules. But the reason why we’re doing it is to see the fans and to have this beautiful special experience where we’re all doing the same thing at the same time with everyone in the room. Everyone is collectively losing their shit, and it’s such a beautiful experience and makes everything worth it.

Naomi: I never really got to travel as a young person. It’s cool to think about how many states I’ve been to. I’ve been in most states at some point or another. Oh and eating different foods in different places is fun. There’s good food everywhere.

Katie: We try to have some moderation because you can go to any city and they say, “Oh, you have to try xyz.” It’s always the carb of the city. We had vegan Philly cheesesteaks when we were in Philly. They were really good. 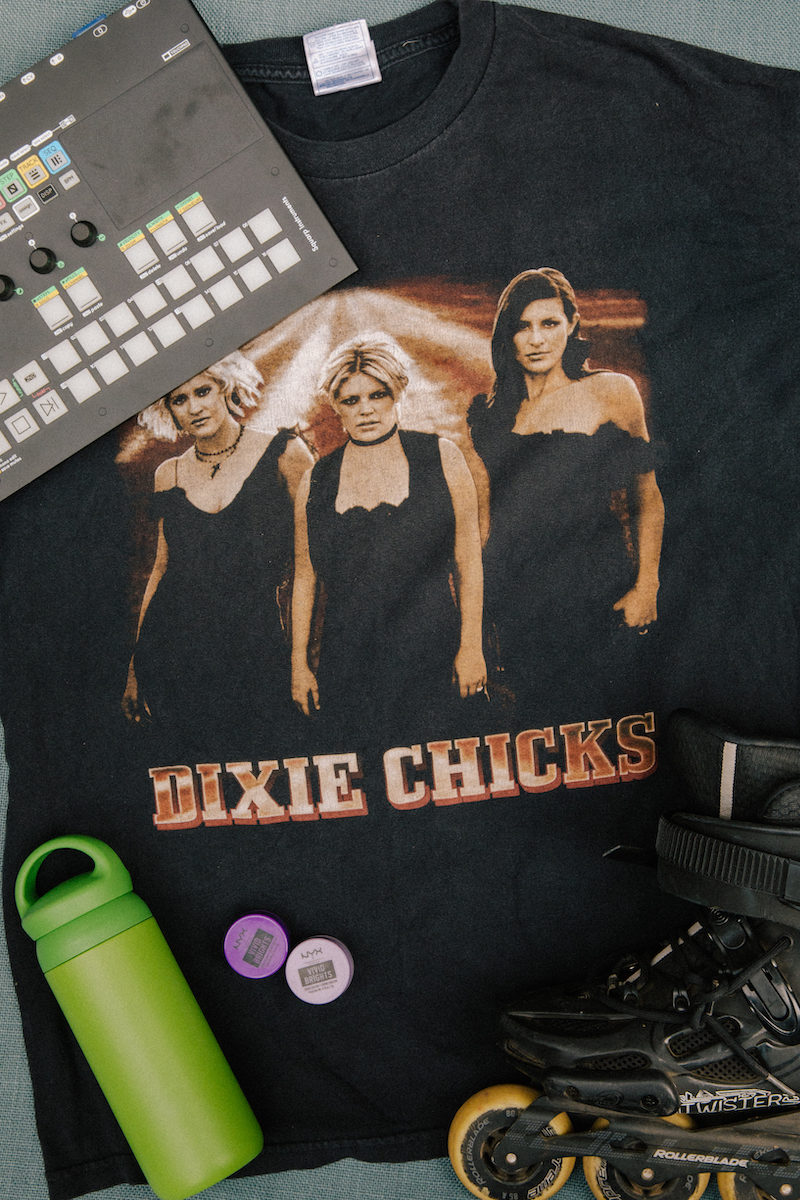 Katie Gavin packs a Dixie Chicks Shirt: “We have a couple of vintage shirts from other bands. I have dixie chicks, Tori Amos, and Madonna. I like to have the pack of strong women with me. They’re my guardian angels.” 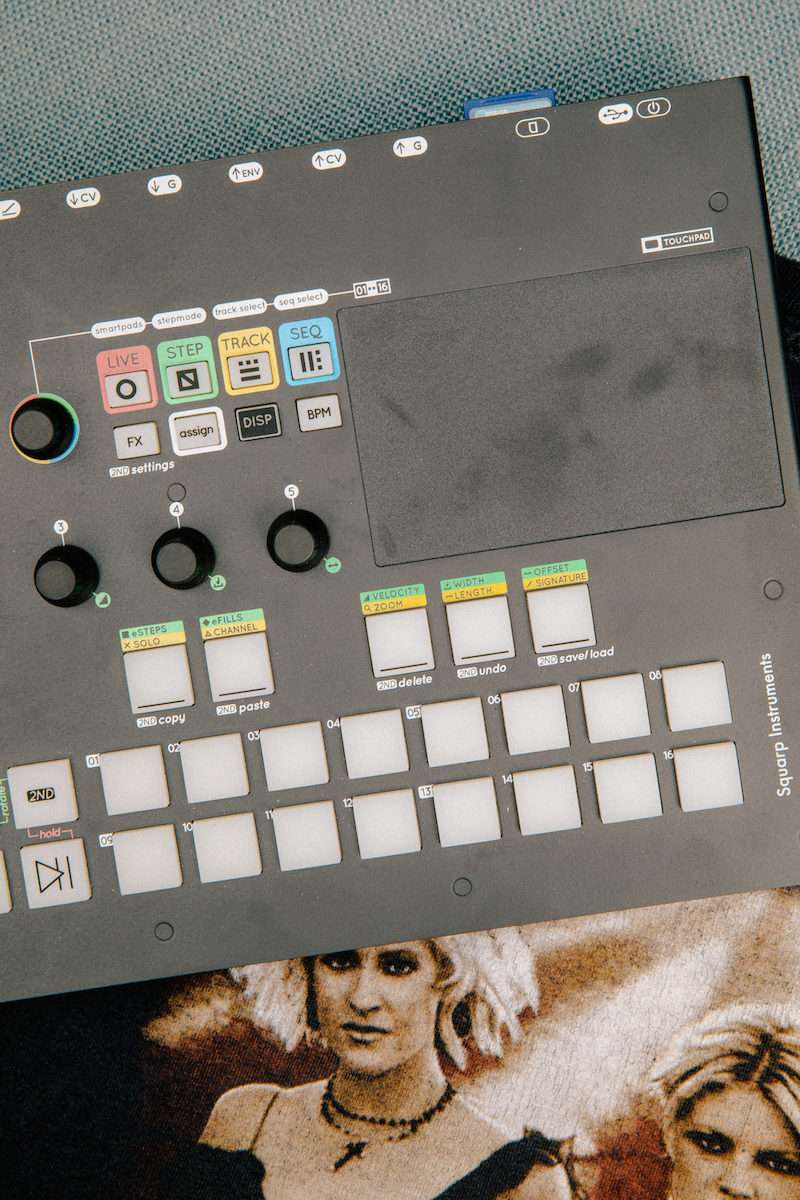 “This is a really fun portable sequencer to play with on the road," says Gavin. "I just plug this into my laptop and beep-boop around.” 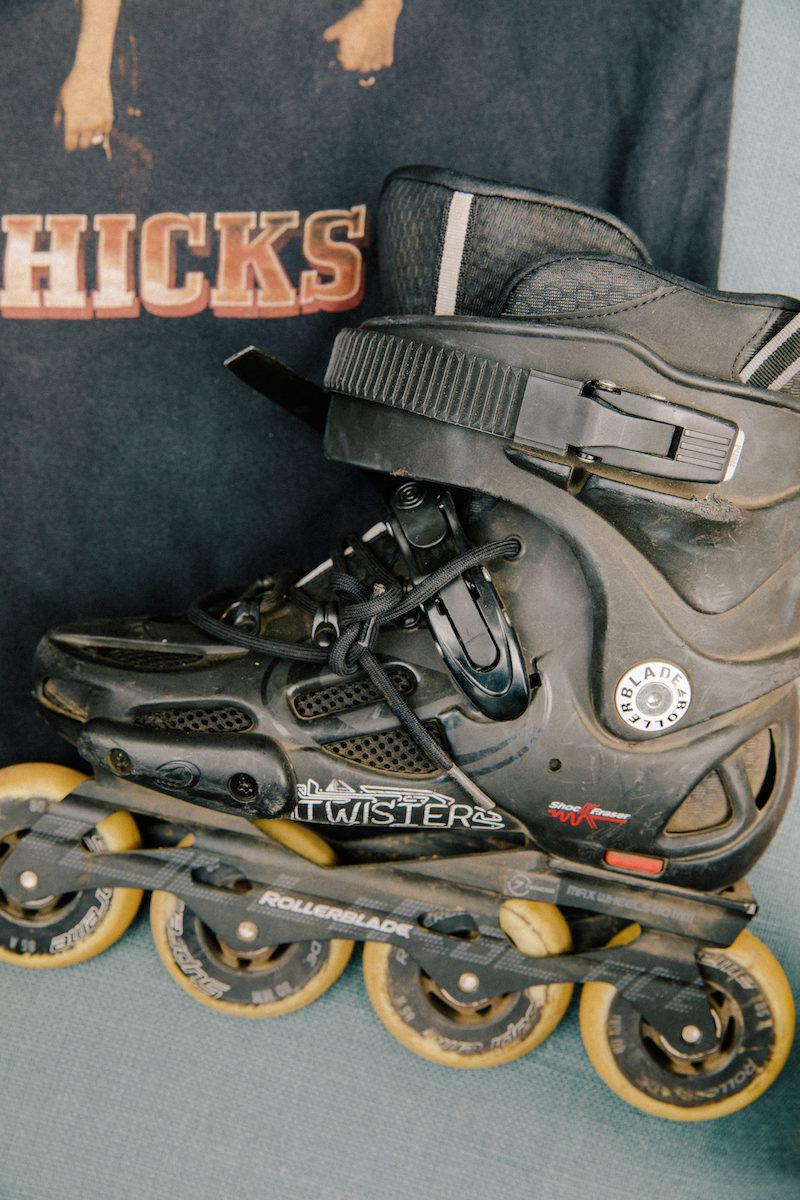 Gavin is a notorious rollerblader: “You only have a certain amount of time in every city. It’s fun to play the game of, 'How can I use this time to interact with where I am?’ Blading is a really fun way to do that."

To Work or Not to Work (On Tour)

Katie: For us, I think tour is a balance between togetherness and aloneness. I think for it to be sustainable, like any intimate relationship, we have to have our boundaries. Everyone is different. It’s about accepting what everyone does.

We just finished an album. Some people need reflecting periods, but I’m not really like that—I write all the time. I journal pretty much everyday, and I’ve been writing on the road just because it’s been really inspiring. It’s just happened naturally that I’ve wanted to write. Also, we keep a guitar, and I have my sequencer on the road for the first time, which is fun to make beats on.

Naomi: Sometimes there’s also practical stuff we have to work on. For example, we did a Spotify singles thing—an alternate version of one of our songs and a cover—so we’ll work on that stuff on the road. We’re still adjusting to bus life. Fingers crossed we’ll continue to tour and be on a bus, that our practice of writing and working will develop. I’m hoping to get a good mobile production rig going to facilitate working in a more sustainable and reliable way on the road because sometimes it’s hard if you have technological needs. 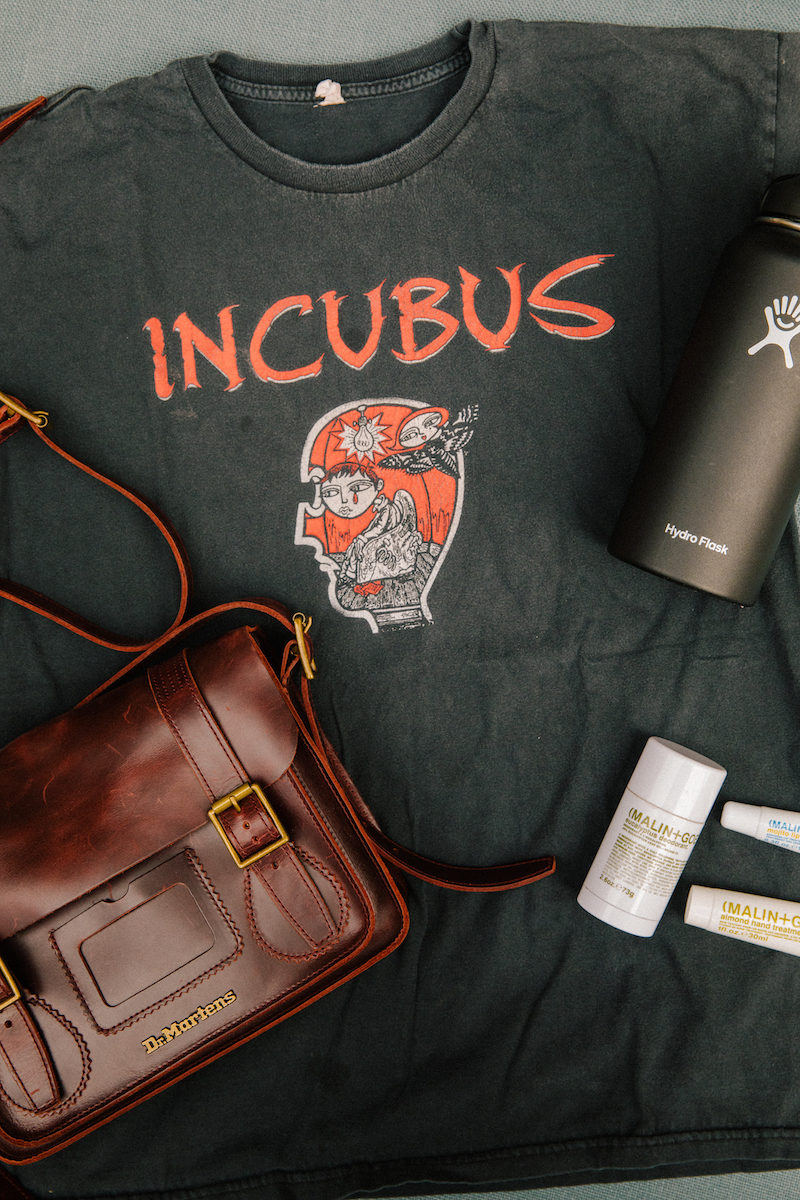 Josette Maskin packs an Incubus Shirt: "Incubus was one of my favorite bands when I was like 13. Also we’re all into excessively oversized tees." 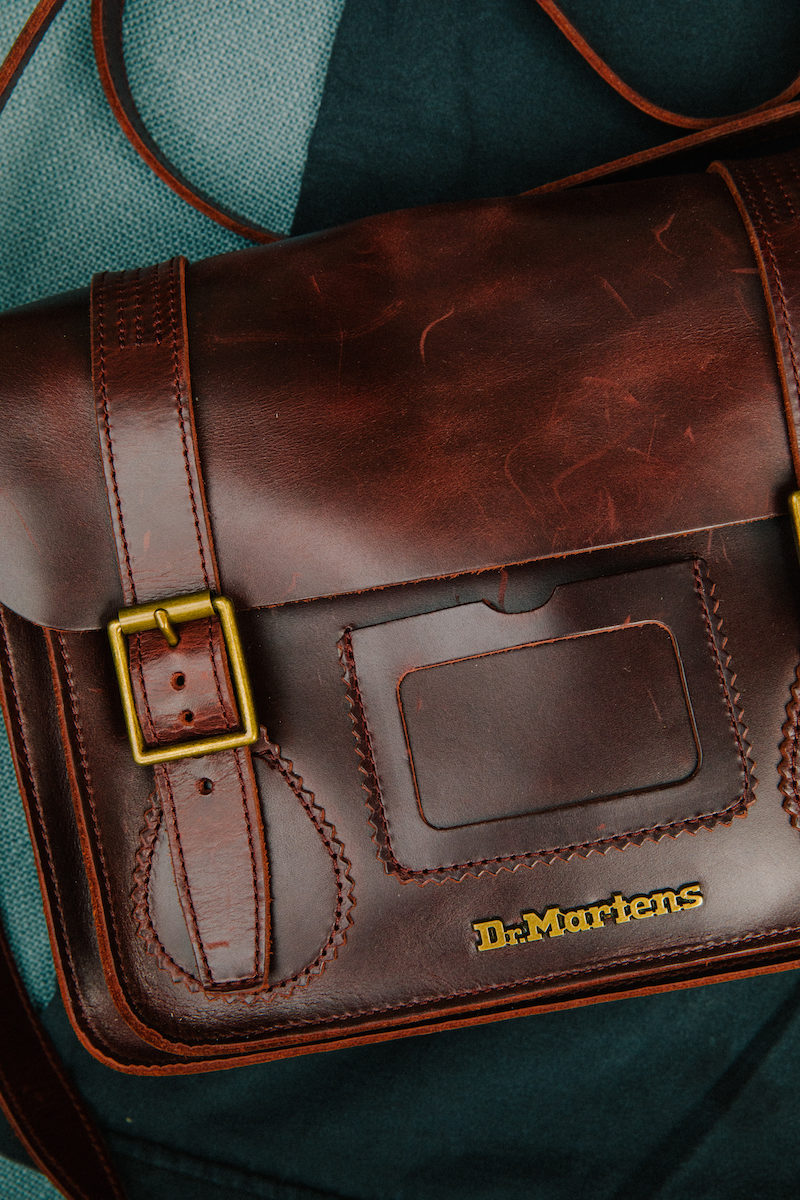 “I take my Dr. Martens bag whenever we’re out in a new city," says Maskin. "I’ll pack up all my essentials in it and go explore or go read somewhere or go write in my notebook.” 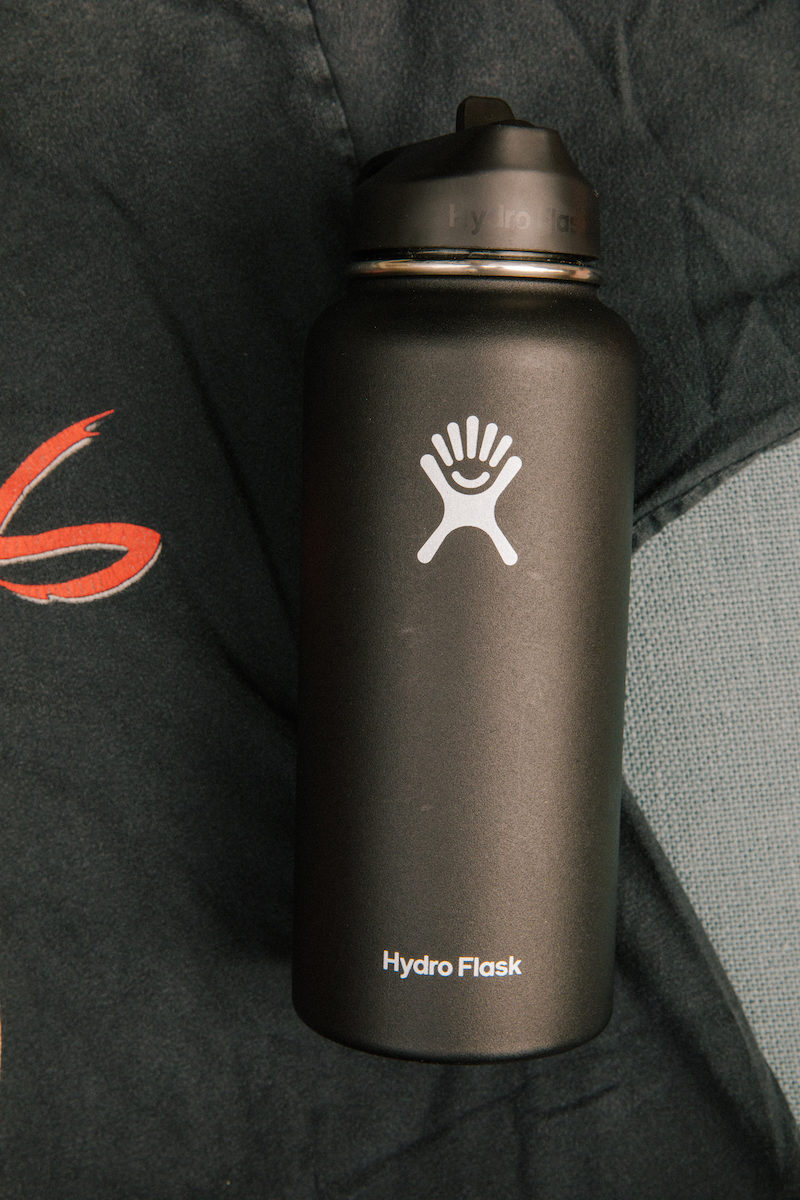 Maskin takes a Hydro Flask with her everywhere: "You need to stay hydrated.” 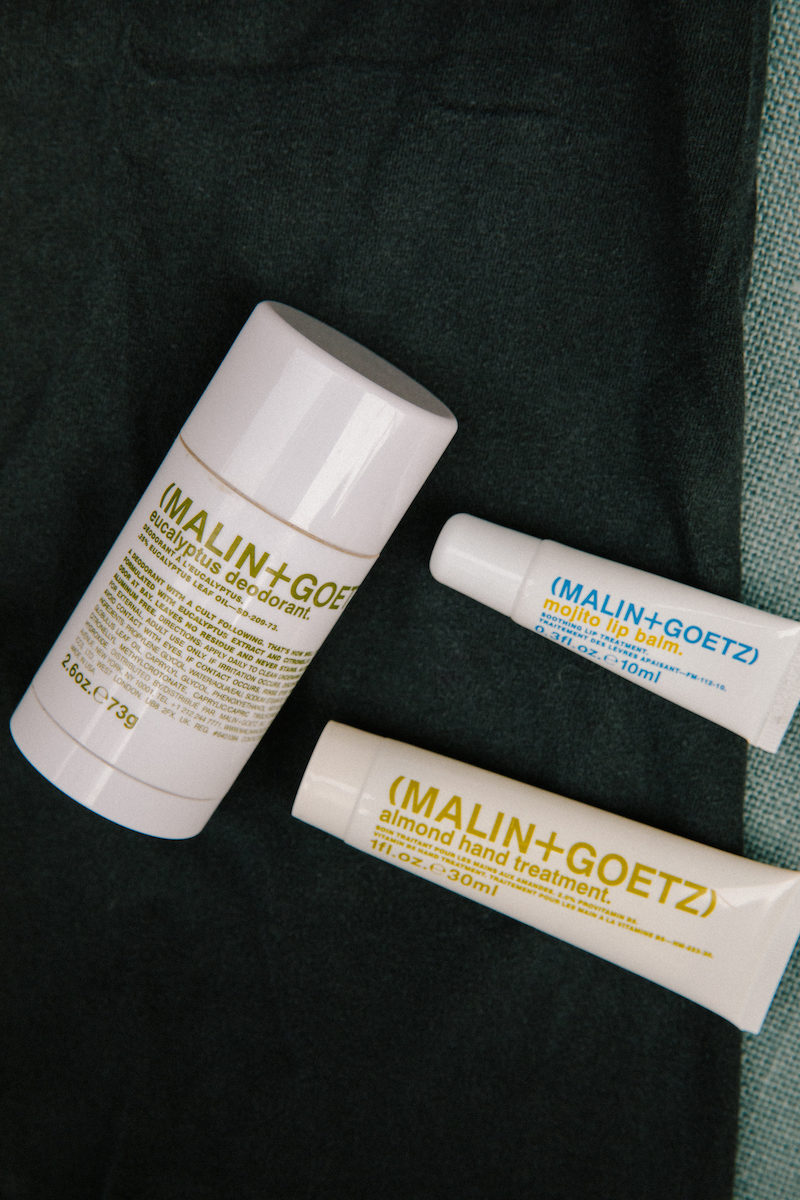 "All my Malin products are to keep me all lubed up and not dried out," says Maskin. "Being on the road dries out my hands and my lips. As soon as we start tour I start to get really dry skin."

Naomi: Sleeping while moving? You get used to it, but the first few nights are weird. It’s like the bumpiest cruise ship, but not as nauseating.

Josette: The first night is definitely anxiety filled. You think, “Is it supposed to feel this way? Or are we actually getting in an accident?”

Katie: Pretty much every part of your habitual schedule can shift at the drop of a hat. We like to have routines, but it’s just not really possible on the road, so it’s about having consistency where you can. I try to meditate outside most days in different cities, but I can’t control what time of day I get to do it.

Naomi: We all developed pretty consistent mood-regulating activities in the two years that we were making the record. In the past year, I got very addicted to doing yoga first thing in the morning. Up until tour I missed maybe two weeks total. I just had to surrender to not doing it in the morning. If I get to it, I get to it. If not, it’s ok.

Katie: I was talking to somebody else we are touring with about the sanctity of a well-packed suitcase. This sounds like I’m joking, but it’s really so important on a cosmic level to do your best with the situation at hand. I used to have a chaotic suitcase, and that’s hard on your mental health. It becomes this metaphor. Just having things packed as well as they can be, trying to get joy out of doing laundry and having fresh clothes when you can, and having things well organized—that makes you feel better. That makes you feel like you’re doing your best. 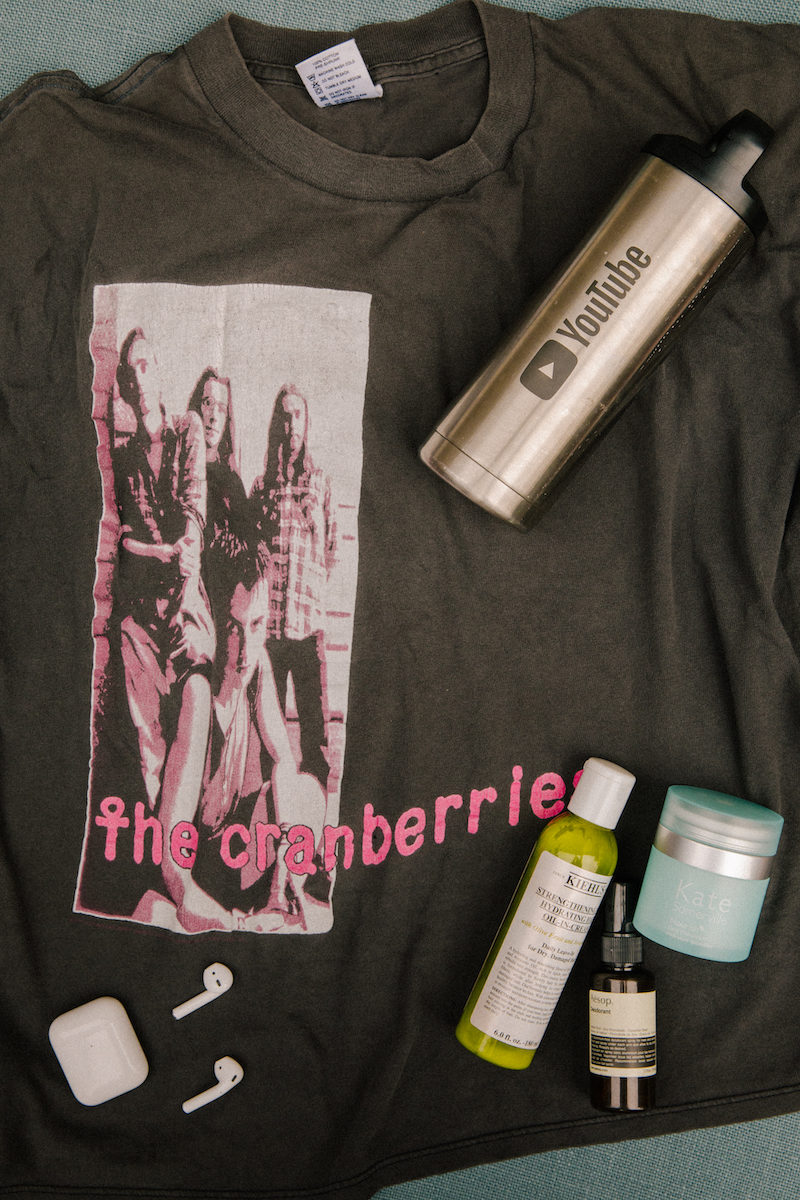 Naomi packs a Cranberry's shirt: “Comfort first on tour. I only bring one pair of pants, so I oscillate between shirts to switch up the look.” 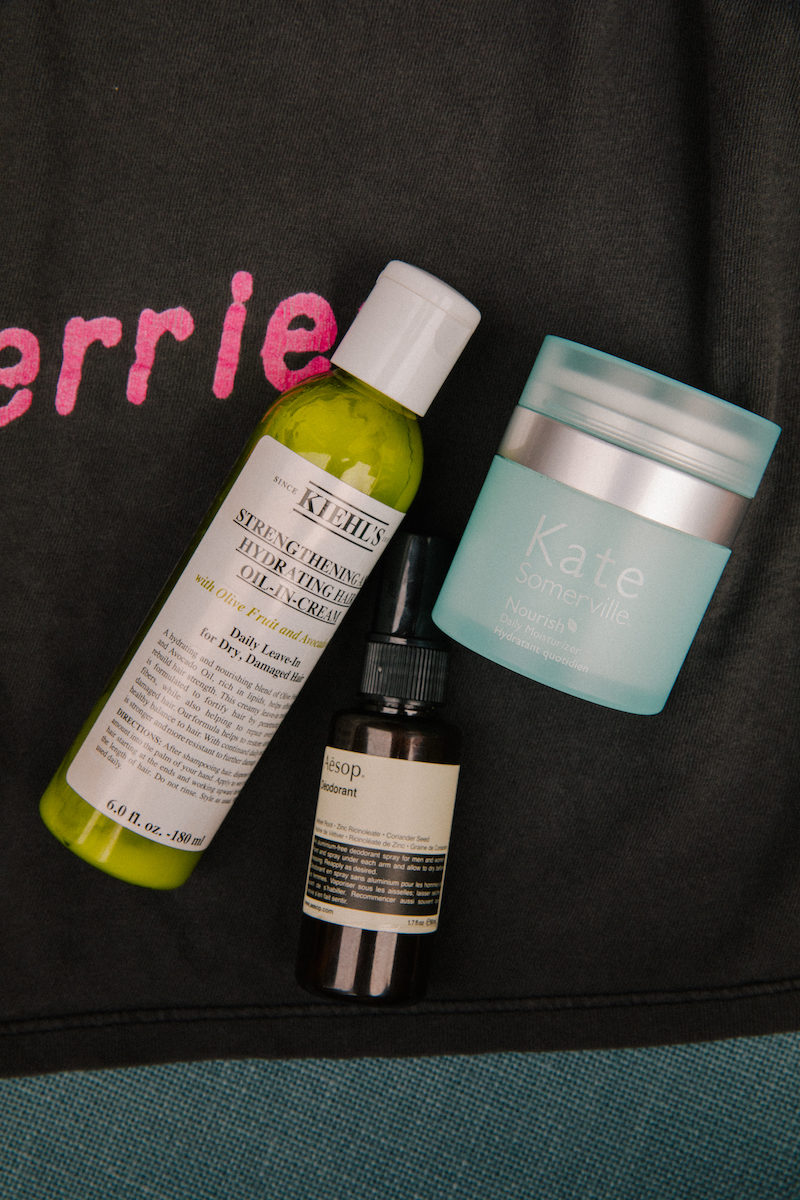 “I have really curly hair and I go through bottles of this Kiehl’s cream quick as hell. I use it every day," says Naomi McPherson. "It smells nice, and it’s the only product I found that really works for me.” 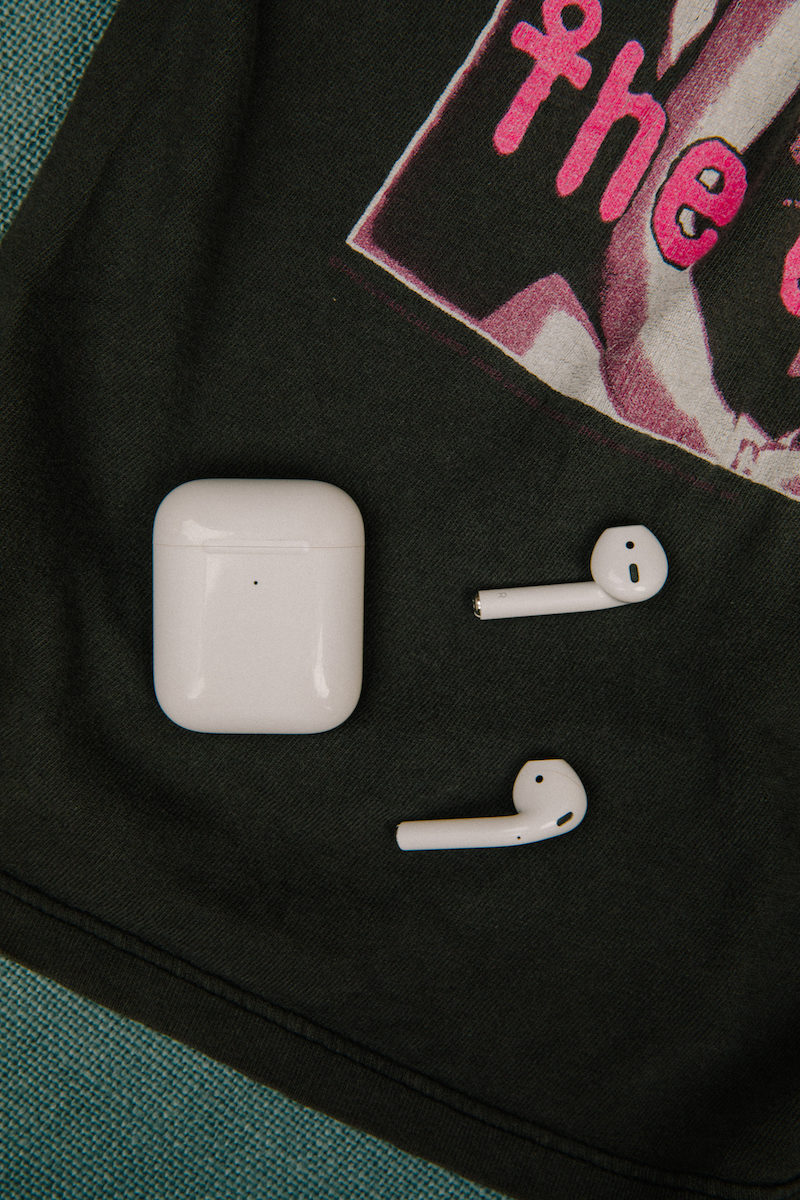 McPherson can't hype her AirPods enough: "They’re so legendary. They sound great. They come in a portable case. I love these."

Katie: I’m convinced they’re not the size of a twin.

Naomi: It’s essentially a slightly skinner version of what you would have slept on if you went to university—the extra-long twins. I kinda sleep in the fetal position on the bus so I make it work.

Josette: I feel like we’re listening to our individual podcasts more than anything else on tour.

Katie: I listen to Under the Skin, the Russell Brand podcast. And I listen to On Being with Krista Tippett. I like those spiritual podcasts.

Naomi: I’ve been doing a Let Go, Avril Lavigne retrospective. I’ve been listening to “Losing Grip” every day. I fucking love that song. I love the whole record. It sounds amazing. 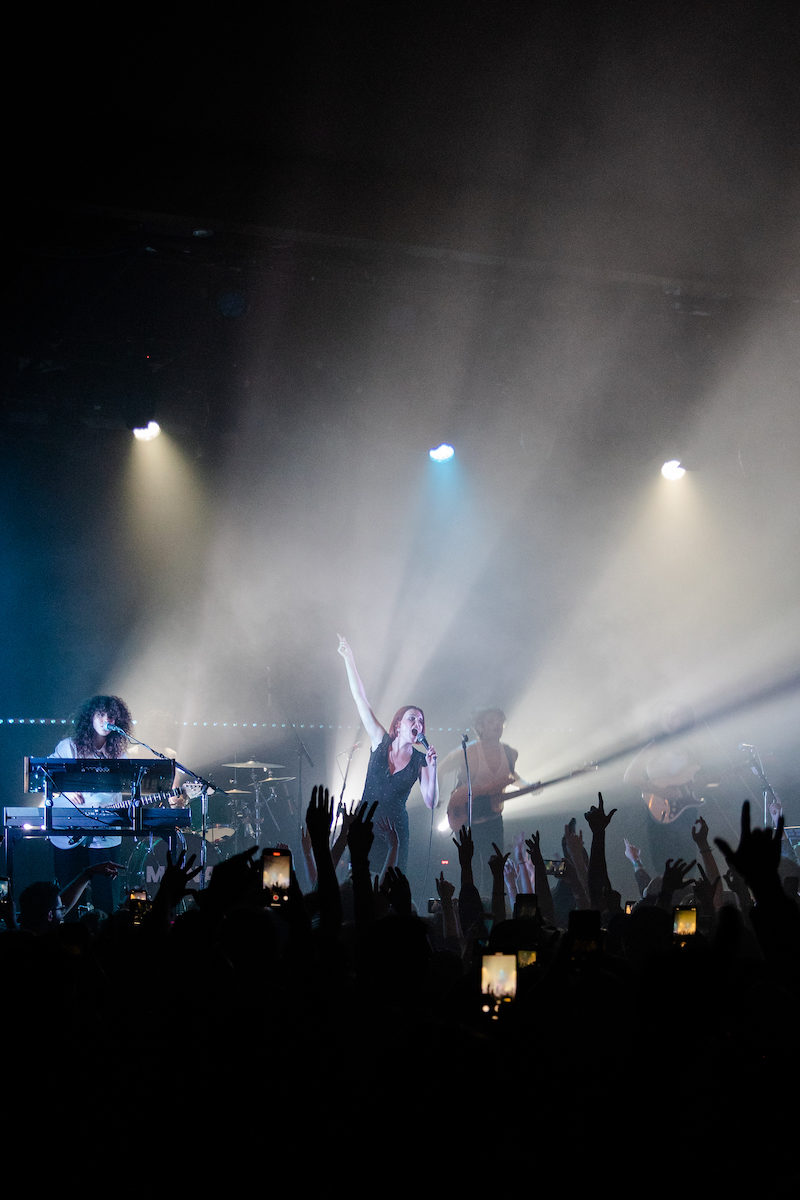 MUNA's "Save the World" tour will bring them from Minneapolis, Minnesota, to Glasgow, Scotland.

Josette: We had a great day in Santa Fe. We’d never been there before. Right now we’re doing major markets so its essentially the same cities that you go to when you first start touring. But it’s always nice.

When you’ve toured a bunch, you have things you like about each city so you can look forward to doing certain things in those cities. It’s always nice to return somewhere. There are good things about every place. You just have to engage with it.