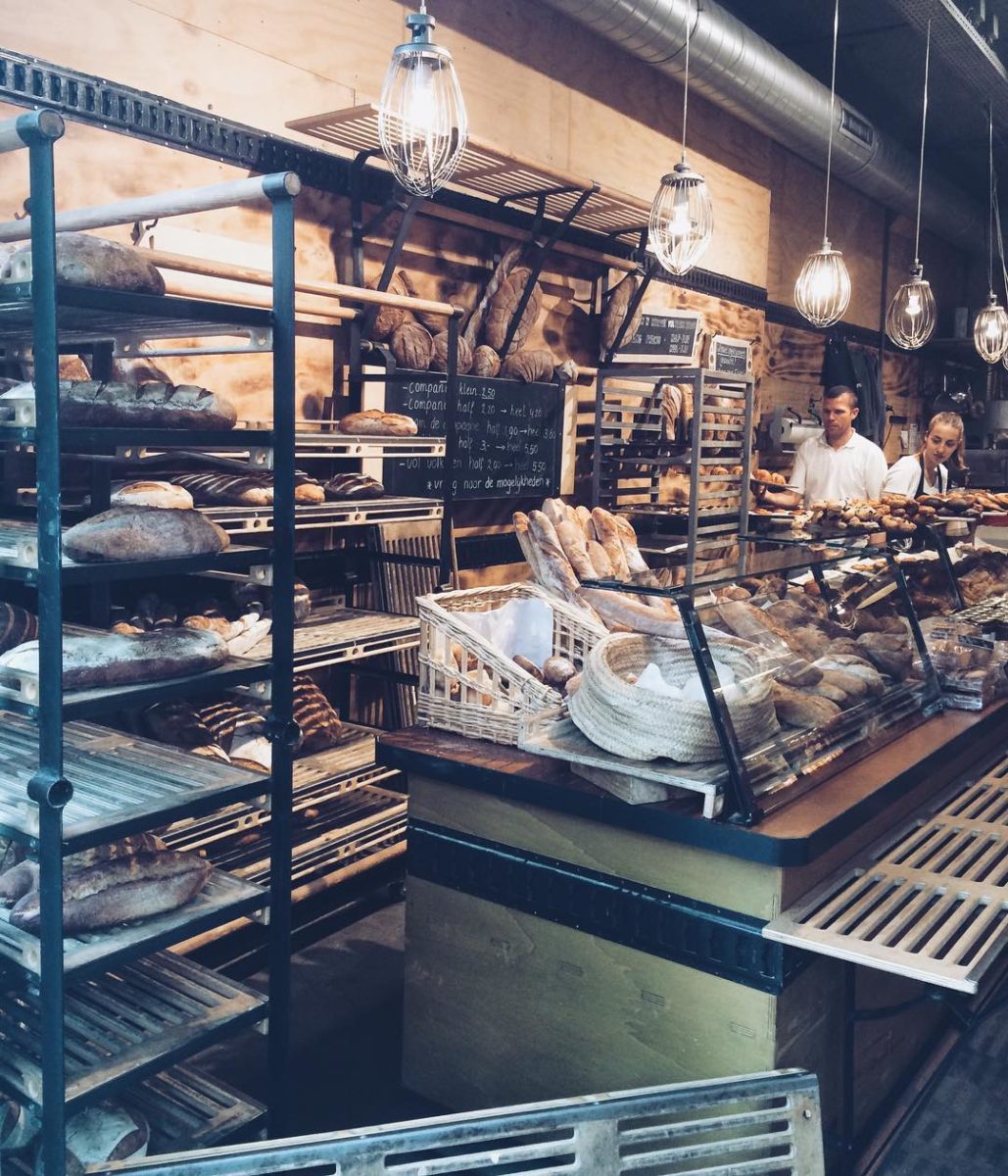 This artisanal triple threat—bread bakery, full cafe, and patisserie—claims authenticity as its bread and butter, having lit up their wood-fire brick oven to bake loaves and pastries since 1926.

Feeling welcome in Amsterdam is easy. The Dutch capital’s cobbled streets and iconic row houses along the canals set the backdrop for the European life I often fantasized about while sweating on the subway platform in New York City’s summer heat. It didn’t take much to love strolling to Bakhuys, the neighborhood bakery, for warm croissants, or picking up a bouquet from the flower stand on Utrechtsestraat, or sitting outside with a cappuccino at De Wasserette, surrounded by beautiful, accented Europeans. The bicycle culture swept me up quickly, too. I could get practically anywhere in a quarter of an hour and avoid public transportation’s inevitable frustrations. For a recovering New Yorker, this was a dream. And almost three years on, it still is.

For all of Amsterdam’s merits, I wouldn’t have made the move here had I not met and fallen in love with a particularly tall, smiling Dutchman. He and I met when he came to stay with his friend, my roommate, for a week on a monthlong trip down the East Coast. Everything about him screamed “European,” from the slim-fitting shirts to the way he took his coffee (an espresso with cream) to his extensive cheese knowledge—a huge selling point for a single girl from Wisconsin. Conversation with him was lively and fun. We chatted about travels, our shared goals to live abroad, and dream trip destinations. He made Dutch pancakes and brought me a dozen cookies from my favorite bakery. I swooned.

On his last night after a week spent (mostly) on the couch, we sipped red wine on the roof deck of my Lower East Side apartment building and looked out over the skyline. He asked thoughtful, personal questions, and I was floored when he genuinely listened to the answers.

The day he left, I found a torn sheet of paper on my bed with a scribbled note: “You always have a place to stay in Amsterdam.” 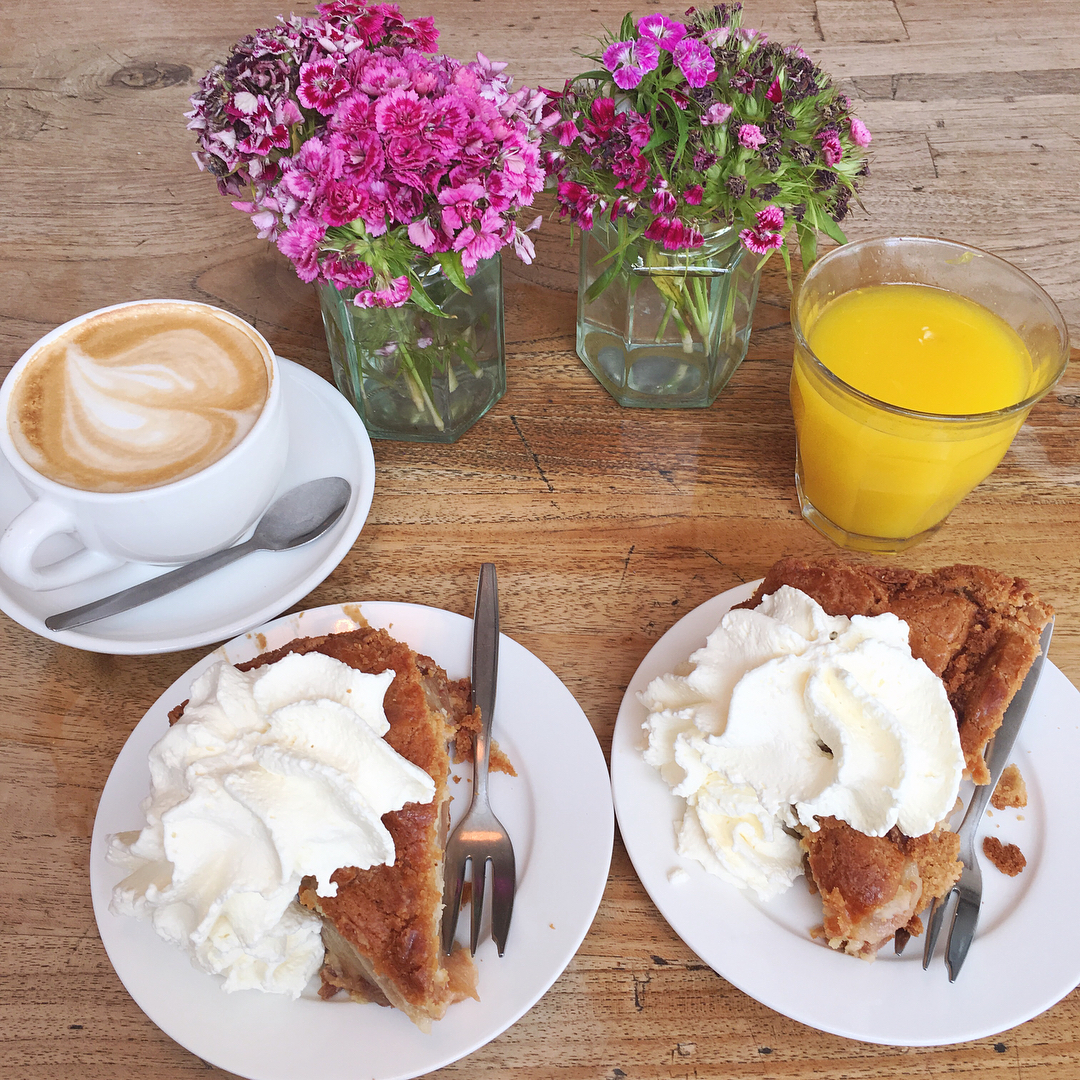 Famous for its apple pie and fresh mint tea, Winkel 43 is one of a number of cafes that line Noordermarkt Square in the charming neighborhood of Jordaan. Along with quality ingredients, outdoor terraces set this cafe apart, making it a prime spot for crowds of any age and size to enjoy a bite with a view.

We stayed in touch, casually at first. The occasional Skype calls became more regular, and soon we were scheduling them because of the time difference. Several months after meeting, I called my parents to say I had booked tickets to Europe and wouldn’t be joining them for turkey and stuffing that year. I landed at Amsterdam’s Schiphol Airport on Thanksgiving Day.

He cooked a feast that night. It was his first Thanksgiving, so I asked him where he found the recipes. His response was matter-of-fact: “The most American cooking site: MarthaStewart.com.” I was in love.

The next 10 days were a blur of unabashedly starry-eyed moments. We shared whipped cream-covered apple pie on an outdoor picnic table at Winkel 43 overlooking Prinsengracht, held hands on the Museumplein ice skating rink, and shared secrets.

When I later poured out every detail to my friends in New York, they summed up the trip as “every American woman’s European romantic fantasy.” I had called my mom in the cab when I arrived at JFK airport after a tearful departure from Amsterdam: “I’m in love with someone who lives in another country,” I sobbed. 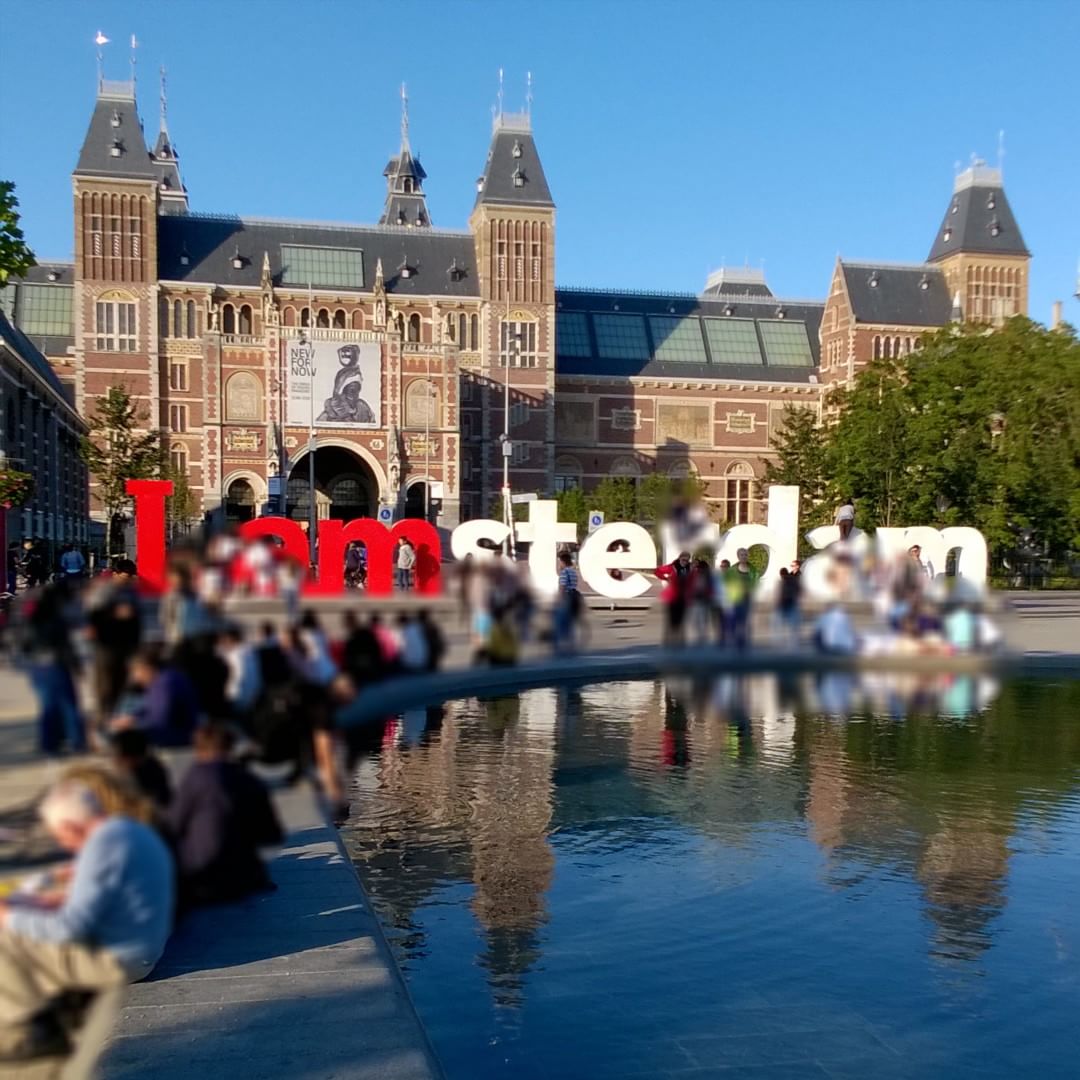 Alongside tulips, coffeeshops, the Anne Frank House, and Starry Night, the Iamsterdam structure--which sits on Museumplein behind the Rijksmuseum--  is now in the running for most iconically "Amsterdam" image, as it's become one of Europe's most popular photo ops.

He and I continued the cross-continental visits and daily calls. We sent more “I miss you” messages than I’ll ever admit. Six months into the relationship, I sat with two close friends in a dark cocktail bar.

“I need to tell you something. I’m moving to Amsterdam.” Their jaws were on the floor. We ordered more gimlets.

At that point, I hadn’t figured out the dizzyingly long list of logistics required for a transatlantic move, but I had decided that a New York to Amsterdam long-distance relationship could only survive if there was an end to the distance in sight. Everything about moving felt right: the guy was great, Amsterdam was stunning, and I even found a visa that would allow me to tick off another goal, starting my own business. All signs pointed to Holland. Soon after that evening in the cocktail bar, I made preparations to leave my corporate job, tiny apartment, and big-city attitude in favor of a new life abroad. 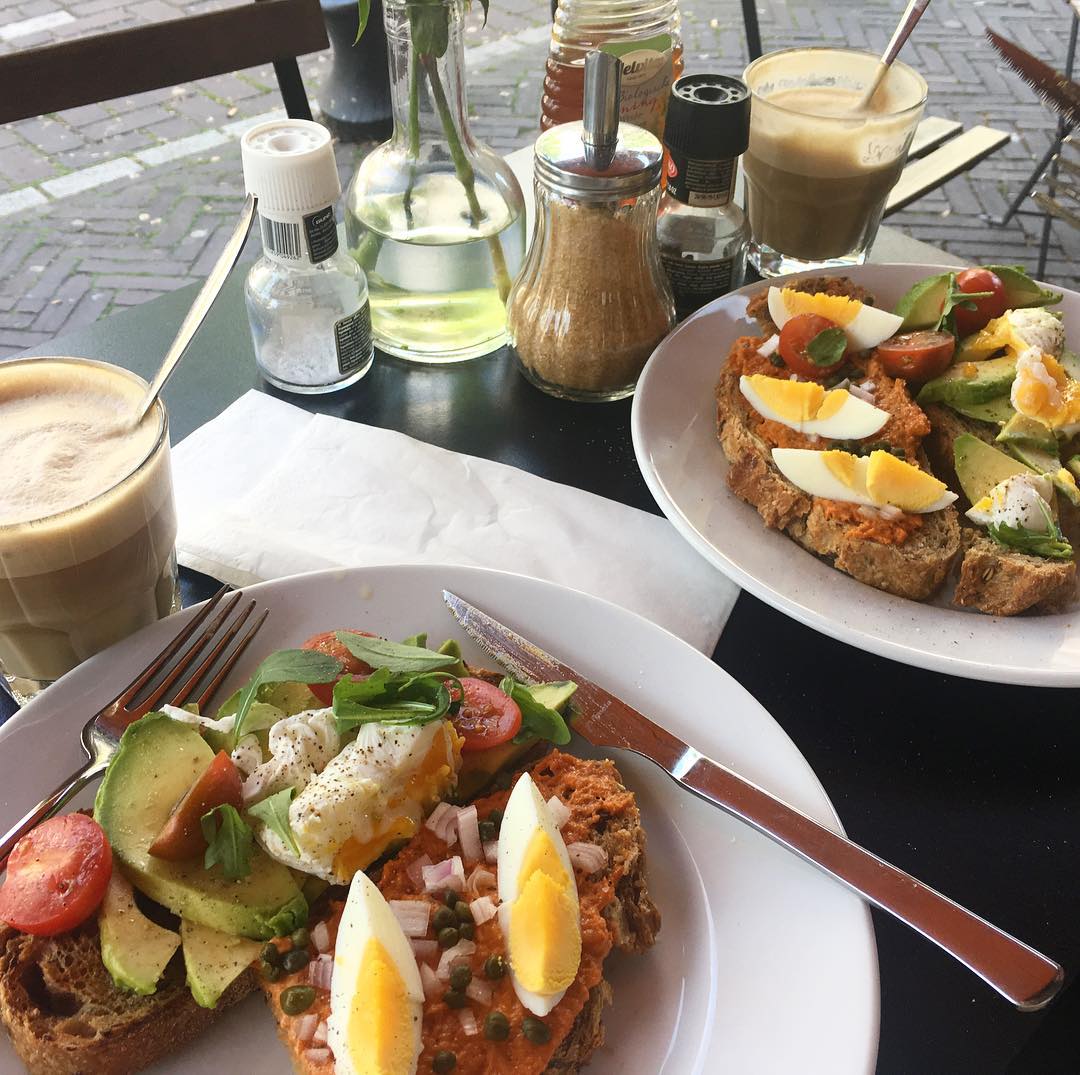 De Wasserette—located in Amsterdam’s charming de Pijp neighborhood just south of the city center—is a favorite brunch spot for locals, travelers, and celebs alike. Stop by and enjoy breakfast staples like french toast and eggs benedict before popping over to the Albert Cuyp Market next door.

Nearly a year after we met, the tall, smiling Dutchman was waiting for me at the airport with outstretched arms when I stepped off the plane in my new hometown.

Amsterdam—the historic, beautiful backdrop of our relationship’s beginnings—seemed to welcome me with €3 glasses of wine, startlingly good supermarket chocolate, and quintessentially European scenery at every turn. Even the energy of the city was refreshing. To my New York brain, everyone here seemed relaxed. “FOMO” didn’t translate.

I made friends and took weekend trips to Seville, Fuerteventura, Ghent, Antwerp, and Paris, settling into a new normal that I saw as calmer and more adult than my former existence. My beau and I piled into a car and drove through France for two weeks, returning with cases of wine and blocks of French salted butter. Could this be real life?, I asked myself often. This was real life. When I returned from a visit to the States, I felt a wave of contentment as soon as I heard the plane’s captain speak words in Dutch. I was heading home.

Then, two years into my bucolic Dutch life, my boyfriend and I split. It was sad, frustrating, and confusing, as breakups often are.

For the first few weeks afterward, I would reach a bridge and angrily pedal my bike hard over it. A few weeks after that, my legs felt weak at the steep part and I’d hop off to walk over it.

I traveled to escape the city that was laden with once-happy, now-painful memories. Summertime Eurotrips aren’t without their own adventures: I had a dance off with a performer at a Mykonos beach club, poured red wine down my white shirt at a bar in Dubrovnik, attempted retail therapy in Paris, and pulled my own pint of cider at a London pub. But eventually I craved the predictability and ease of life in Amsterdam. I wanted to feel at home again.

The heartache lingered. As fall set in, I redirected the sadness to tasks that I was convinced I didn’t need a boyfriend for: unclogging the kitchen sink, oiling my bike lock, starting the charcoal grill, carrying heavy bags. I joined an all-Dutch soccer team and bundled up in the wind and rain for our outdoor practices. When it came to hosting a Friendsgiving celebration for my expat friends, I managed to smile, thinking about that first Martha Stewart-inspired holiday. Making the turkey in my own oven without him was a symbolic feat—one not fueled by pain and missing but by true gratitude for friends to celebrate with in our adopted hometown.

As time went on, I became less afraid of the places in the city that were reminders of the relationship. I returned to the café for apple pie where he took me on my first visit, cozied up in the corner of the wine bar where we had spent the past Christmas, and took a solo stroll along the Amstel River where he and I often walked hand in hand.

Now I’m back to involuntarily grinning as I cruise along the city’s waterways on my bike. Even without the man who prompted my move abroad, Amsterdam is the first place I’ve felt truly at home.