Moses Sumney Is a Natural Wonder

Ahead of the launch of his latest album, græ: Part 1, breakout musician Moses Sumney has found creative productivity by seeking places of relative isolation among nature.

Of course Moses Sumney and I are late meeting each other. It is Los Angeles, where time has little in the way of concrete or predictable meaning. He is in town for a residency at the Bootleg Theater and I have just left Burbank Airport, heading south on the 5 Freeway in my rented car. Mostly smooth sailing as I pass studios and Teslas and sprawling nondescript warehouses, the morning sun peeking over the snaking concrete of the L.A. River.

But when I get off the 2 at Glendale Boulevard, it’s an entirely different story. This is when I join the city as we know it, the Los Angeles I remember from my childhood. Bumper to bumper, heat rising, engines running, nothing happening. Here we are all together in that peculiar state of automotive stillness specific to L.A. Two gruff-looking men are in a pickup next to me, on the other side a woman in a luxury SUV, windows up, sunglasses on, lap dog lapping, hair blowing in the AC as she taps her acrylics on the steering wheel impatiently. We lurch forward. We stop again. 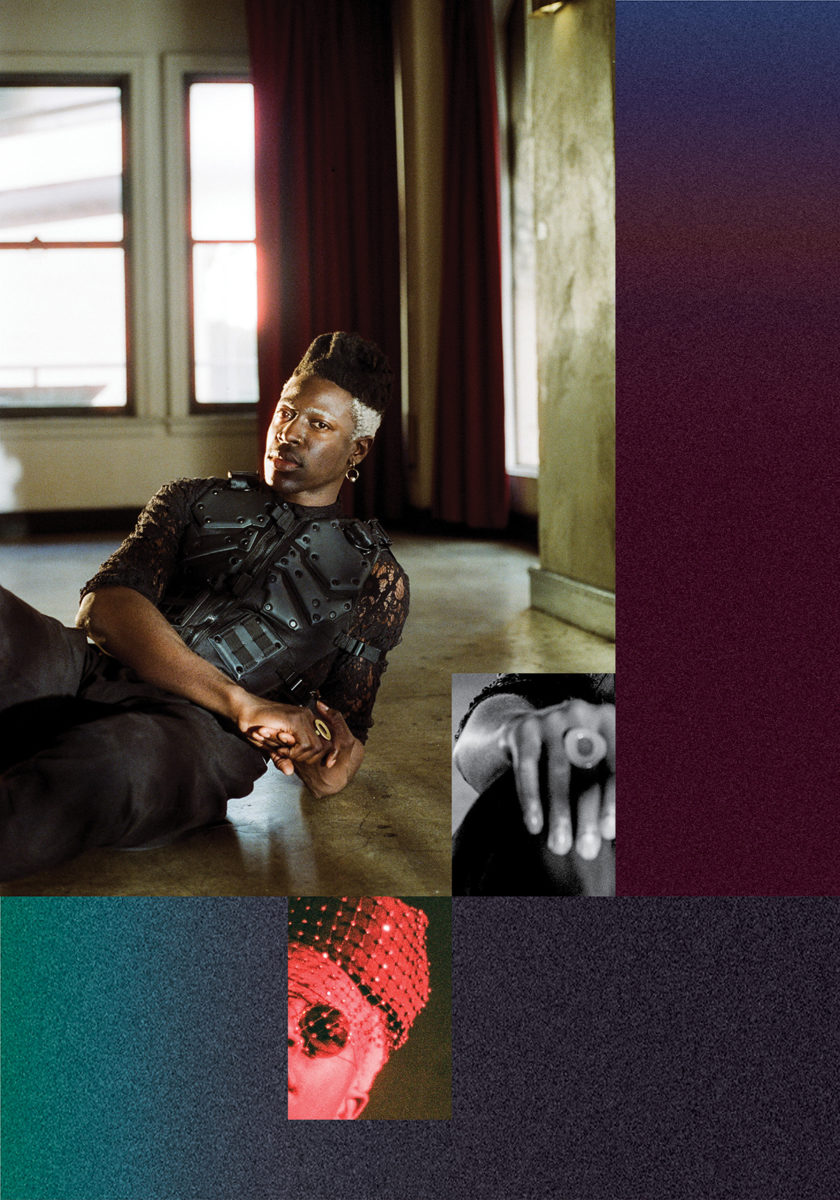 Even though we are not yet together, Moses Sumney is with me, booming through the system of my rental at this very moment. The plucking bassline of “Cut Me,” the latest single from his newest album, græ: Part 1, is gently vibrating the car and everything in it as if trying to wake us all from a pleasant slumber. The song is full but spacious, stacked in sonic tiers that overlay one another without overlapping. Brass lines are restrained and muted—more trombone and French horn than trumpet and saxophone—and where other funk horns sting, these do something closer to making a clean incision in the softest part of your flesh. The heat and the concrete and the vast deserted sea of Los Angeles can make you feel crazy. But other times the sun is so imminently hopeful as to make even the act of suffering feel beautiful. That is how this city takes up residence in you. And Moses Sumney is perfect for this vibe.

This intersection of suffering and beauty is where much of his work lies and it makes sense that he spent significant time in Southern California, where he partially honed his artistic sensibilities. We finally meet up at Republique, a bustling cafe bistro on La Brea with high vaulted ceilings, community-style seating, and some of the most gorgeous pastries you’ve ever seen. After small talk with the manager—who, in a very L.A. moment, turns out to be someone I once took an improv class with—Sumney and I dig in to our respective meals and begin to talk about music, travel, career, and the narrow lanes of identity for black artists. I ask him where he finds the mental space it must take to create his music.

“…the time I spent in Ghana was very much establishing an inner life.”

“The mountains have been a recurring thing for me,” he tells me above the chatty din of the dining room. He lived in L.A. for seven years, and during that time he found himself staying in spots all over the city: in the crevices of Beachwood Canyon or Mt. Washington, on the vast grid of Mid-City, amongst the youthful optimism of Westwood. But he needed escapes to Big Bear, Topanga Canyon, and eventually North Carolina in order to clear his mind.

“I think there’s something divine,” he says, “about communicating with birds and streams. The nature of creating [art] is very closely related to the way things grow, and being in nature is inspiring.”

16 New Artists to Upgrade Your Music Taste in Quarantine→ 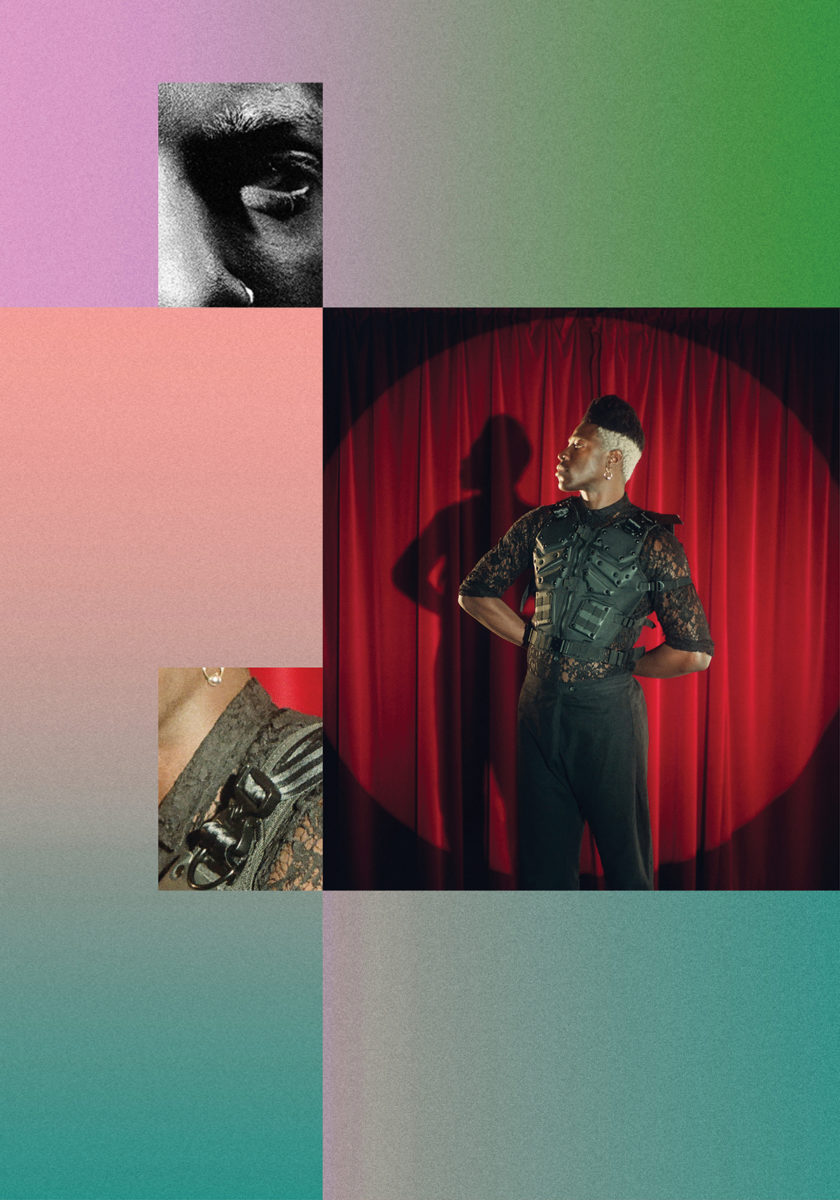 “I think there’s something divine,” says Sumney, “about communicating with birds and streams."

His own growing up meant moving between what seem like two entirely different places: the vigorous West African metropolis of Accra, Ghana, from which his parents emigrated, and the flat, laconic skater suburb of Riverside, California. These disparate experiences of community and humanity likely helped mold him into an artist with a unique combination of influences. Sumney is difficult to pin down to a type, and one might be tempted to use the word “enigmatic” to describe how he presents.

But perhaps his mystery has much more to do with the fact that he moved to Accra when he was ten years old after being born and raised in San Bernardino County. There he found himself something of an outcast, an American with an accent and a totally different set of cultural influences from his peers. It made him feel introverted and shy. That loneliness, he says, helped him. “I had a lot of time to think about what kind of career I wanted, what kind of music I wanted to make, what kind of life I wanted to have. So, the time I spent in Ghana was very much establishing an inner life.” 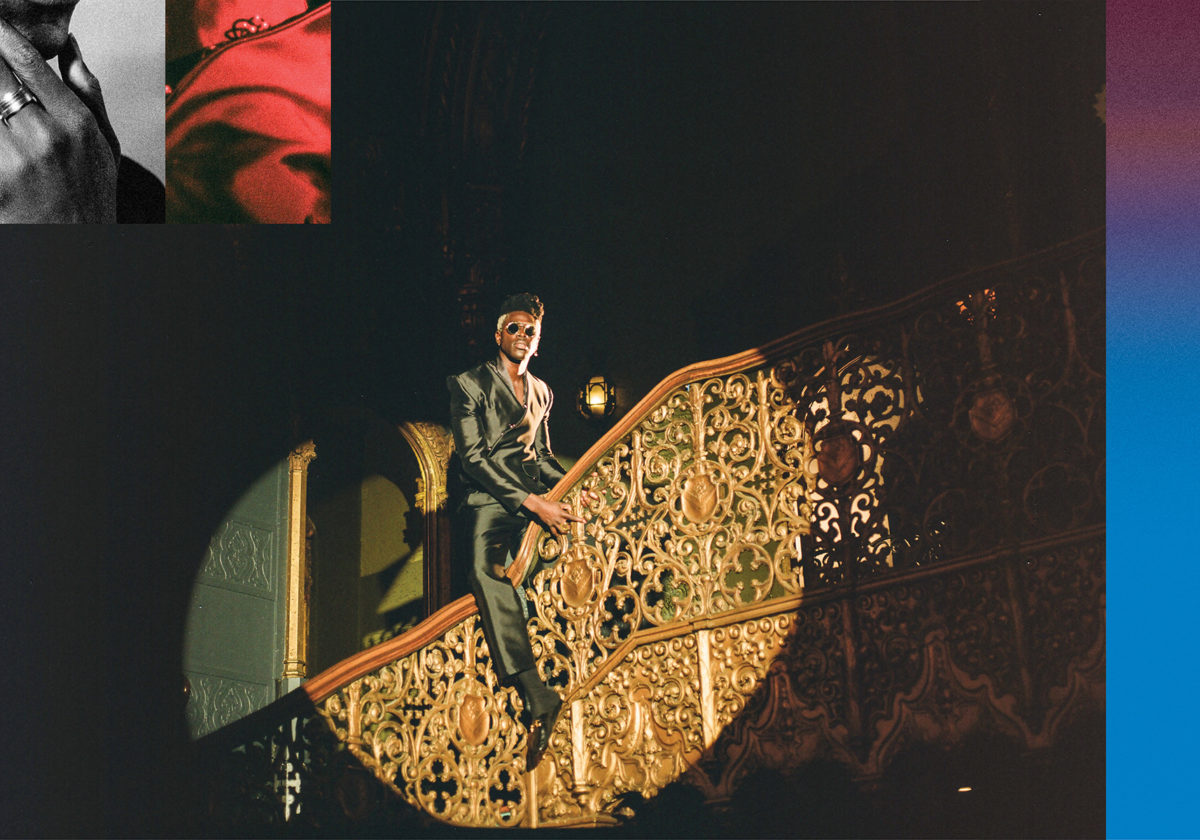 That sense of inner life permeates his music, which is often as beautiful and strident in its emotion as it is reflective and quiet. He first found music for himself singing in a choir in high school, but attended the creative writing program at UCLA. While there he stayed interested in music, writing, four-tracking, and jamming with students in the jazz program. He also hosted a university radio show, and invited alternative R&B trio KING into the studio as guests. A friendship formed and soon they were encouraging Sumney to open for them at local shows. He brought his secluded bedroom act of singing over guitar loops to an audience, and word spread  (maybe gossip about new talent is the only thing that travels efficiently here). Suddenly the young musician was partnering with Sufjan Stevens and taking meetings with a series of record execs who saw in him something that could maybe be the male Solange. But inside, he knew he wasn’t quite ready for the fast life.

“I didn’t expect to get so much attention so quickly,” he says of the sudden flurry of meetings, showcases, and introductions. “So that was like, ‘Oh, this is strange.’ And I walked away.” He felt like he had a lot more to learn in terms of experimentation, production, and writing, but perhaps more importantly, he thought that blowing up too soon might cost him dearly. “I knew that if I were to join some major entity, because I had not yet found myself sonically, they would take control and I would be fighting for creative power.” 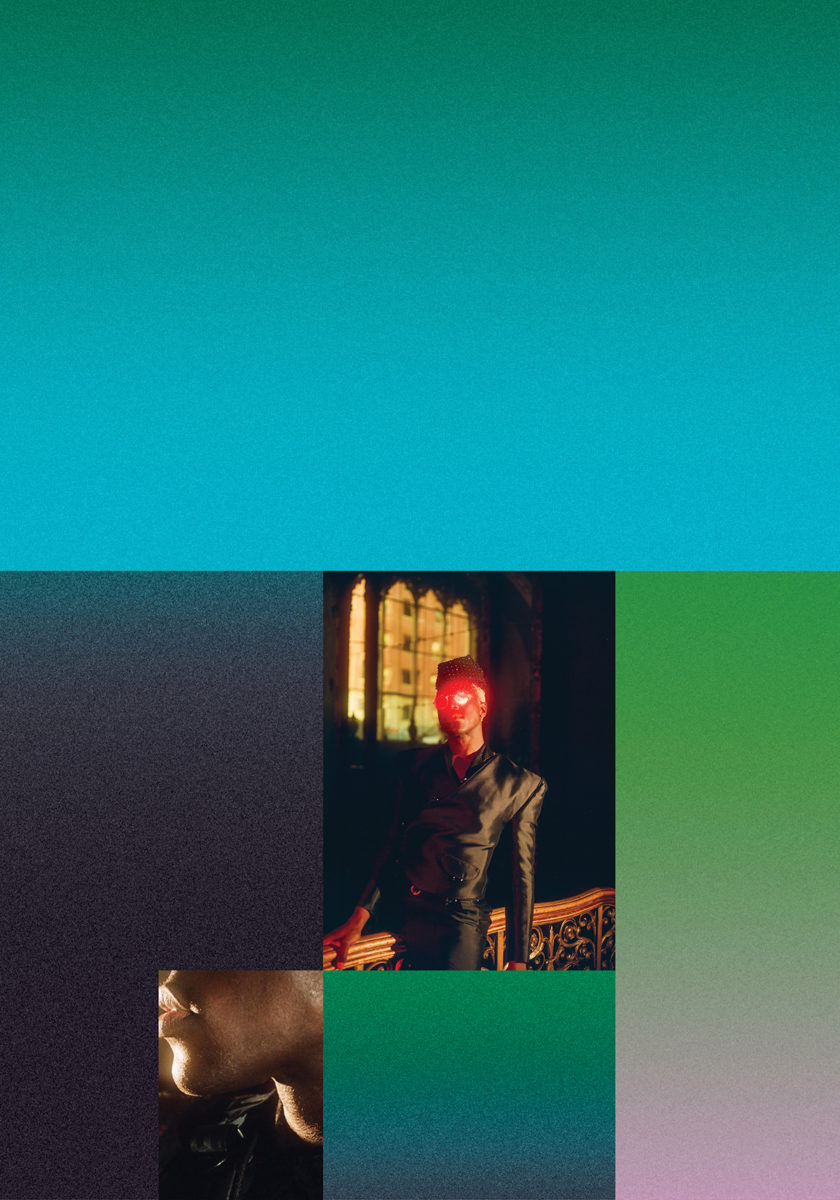 In a sense it was a question of identity. His influences span the gamut from Nina Simone to Smashing Pumpkins, to Japanese ambient composer Hiroshi Yoshimura. His vision for himself and for music was unique, and he wasn’t sure that major labels wouldn’t just take one look at his skin and try to package him as a slightly artsy R&B star.

It would take Sumney leaving Los Angeles altogether to find the clarity to protect that sonic self. He currently lives in Asheville, North Carolina, where he moved before beginning work on his first album, 2017’s Aromanticism. I ask him what he likes about living there but he is too smart to take the bait. “I’m trying not to sell people because people need to stop moving there,” he jokes. “Asheville is horrible, move to Brooklyn!”

Ultimately, however, I am able to coax it out of him. “It’s really beautiful. That’s it. It’s in the mountains, it’s really quiet. It’s really boring and that’s what I like about it. It’s just such a strong contrast from my L.A. life.”

How to Spend a Long Weekend in Asheville, North Carolina→ 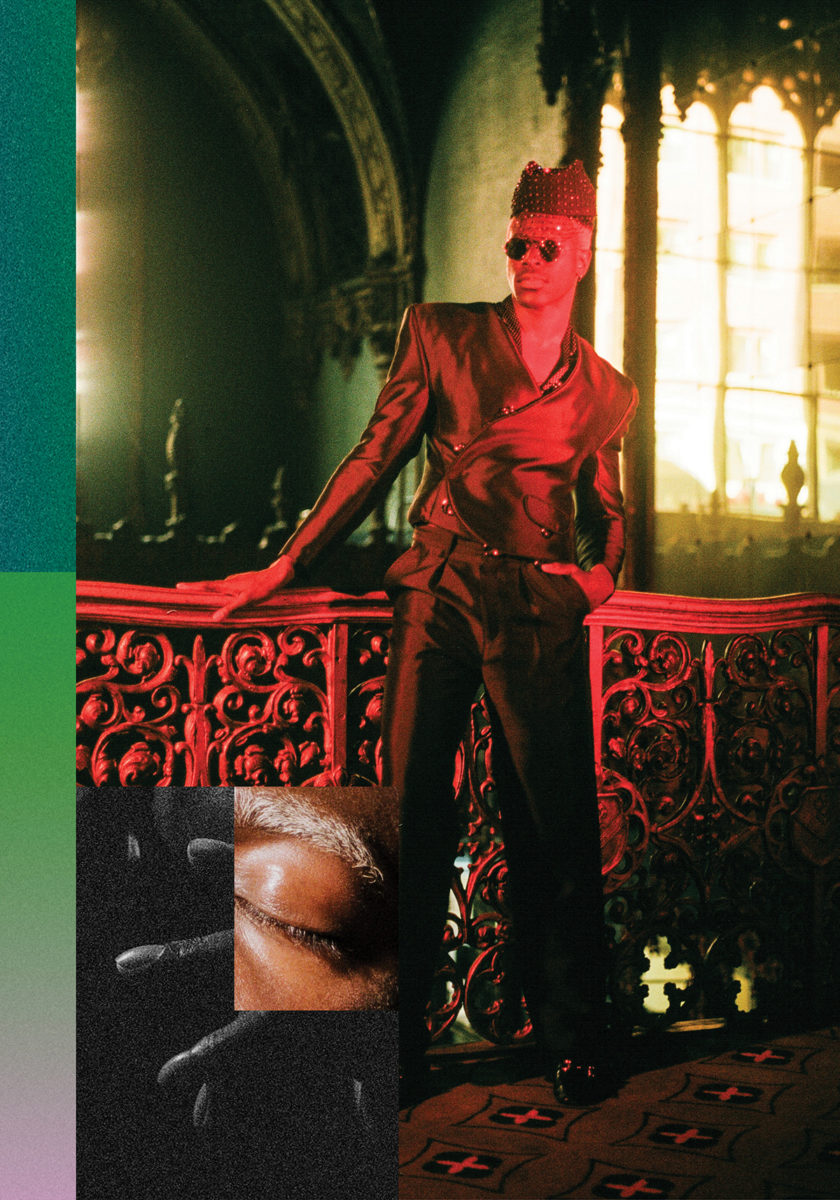 I wonder how he feels he fits in there as a six-foot-four black man with dyed hair and eyebrows (today one is gray, the other black) and thrifted fashions that nevertheless look straight-from-the-runway, but it’s not something he thinks about often. “People are always like, ‘Are you from New York?’ But I feel totally normal and at home. I feel really comfortable in small towns. They’re my favorite sort of vibe… you feel the community more. I think the familiarity you can establish with the people and with the terrain is really special.”

After Aromanticism established him as a force to be reckoned with, 2020’s græ: Part 1 cashes in on the promises his prior work made. His 2017 studio debut was marked by restraint—a quiet, almost hermetic quality (lyrically the album explores the power of a life absent romantic love). But on græ: Part 1, we find a fuller, more declarative Moses Sumney. Aromanticism was a retreat from something; græ: Part 1 feels like an approach toward something, as if his time away from the noise of the city has helped him feel more solid, and allowed him to set loose the wild pantheon of influences he metabolized when he was growing up as a loner. 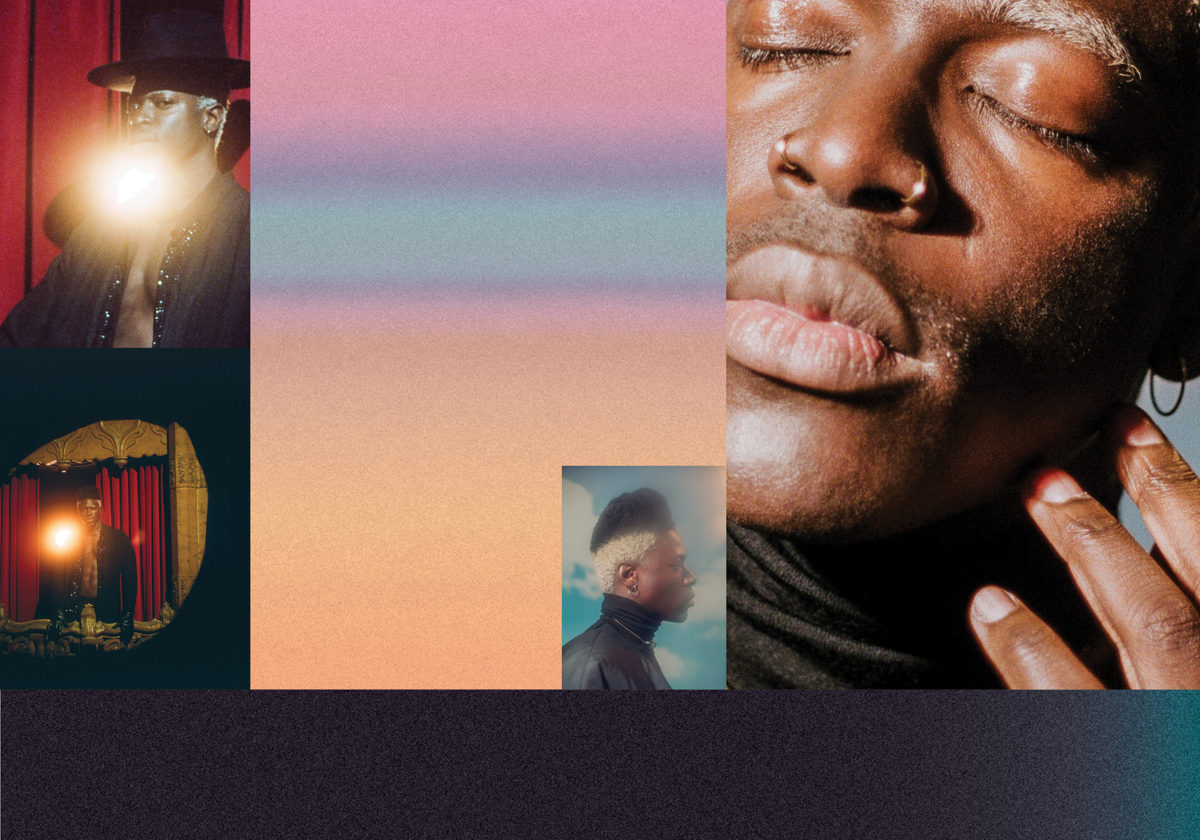 Moses Sumney refuses to be defined.

“I’ve always loved pop music and pop elements,” he says. Early influences included the likes of Nelly Furtado, Beyoncé, Usher—he would record their music and play it back bit by bit until he could perfectly mimic every little run and vocal inflection. As he grew, his tastes expanded to weighty stalwarts like Nina Simone, Stevie Wonder, and Aretha Franklin, whose complexity inspired him.

A largely self-taught musician, he also looked to those around him to help elevate his practice. “In college I would beg the jazz kids to play with me and just really watch what they were doing and try to pick it up.” The result of all this, combined with a considerable helping of natural talent, is a catalog that beautifully mixes so many elements as to become something entirely new, yet entirely familiar.

From San Bernardino to Accra, from Los Angeles to Asheville, Moses Sumney has taken inspiration from wildly different places and made something that cannot be defined as much as it can be felt. “I truly believe that people who define you control you,” a spoken interlude on græ: Part 1 tells us. Maybe that is why he has crossed the world seeking a place, a home, where he can define himself.