If you’re not eating street food in Mexico City, you’re not doing it right. The city is famous for its street food, and not just because there’s a lot of it, but because it’s that amazing. Below, we’ve outlined how to make the most of the CDMX street food experience and which neighborhoods and street corners boast the best snacks.

Wash your own hands, and pick the stands that have a lot of people around them to reduce risk. If you’ve got a sensitive gut, maybe opt for meatless options.

If you don’t speak Spanish, ordering street food will be a little challenging, but still possible. Don’t be shy! Always say buenos días (good morning), buenas tardes (good afternoon), or buenas noches (good night) when you approach. Mexicans are polite, and a NYC-style step-up-and-order-as-quickly-as-possible might rub people the wrong way. Next, point, smile, and say por favor (please). If they ask “¿Con todo?” (“with everything?”) always say yes. Or you can say sin (without) and point to the things you don’t want. But really, you should trust the process. French fries on your taco? Don’t knock it ‘til you try it. 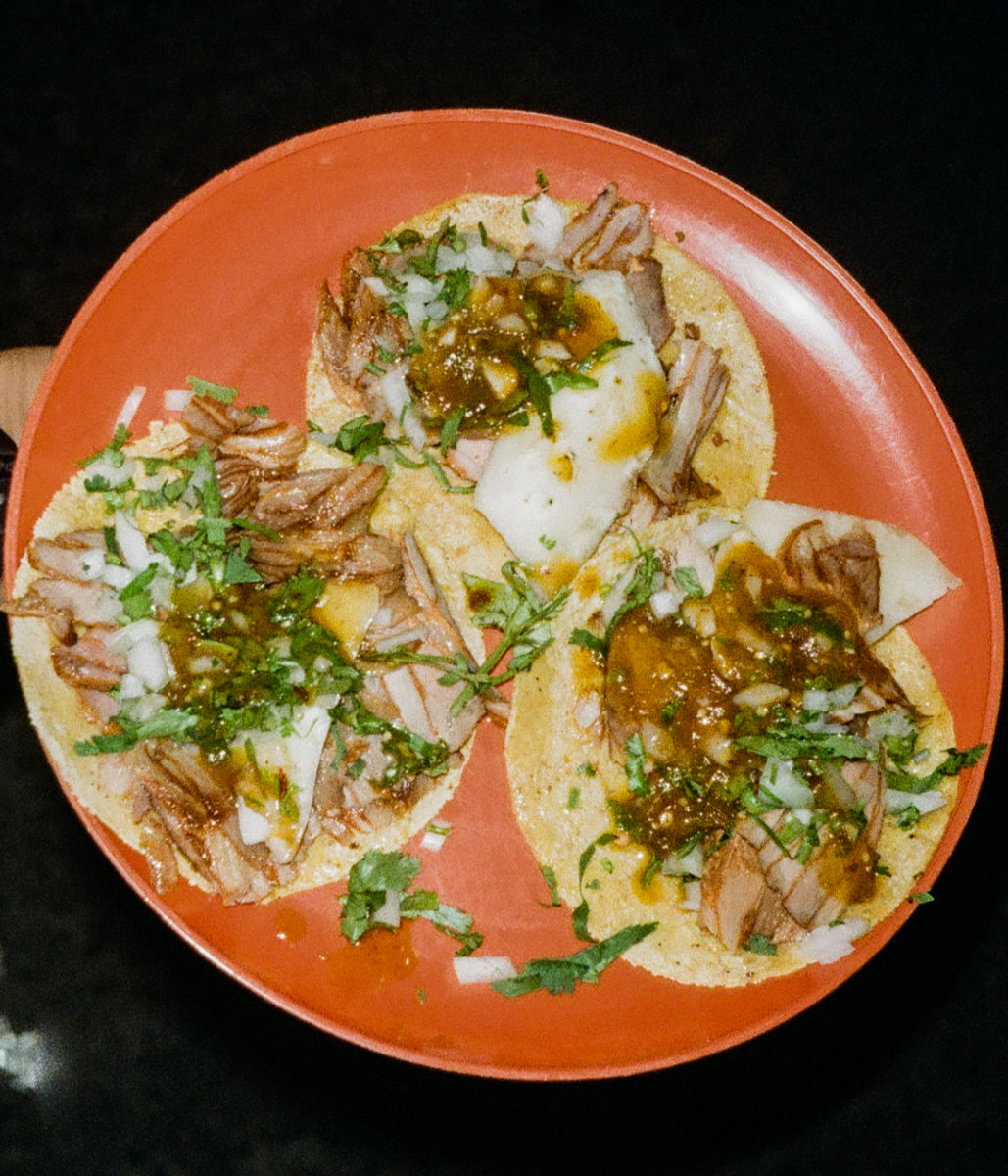 You will need cash, always, and small bills or change. The burden of change is on the customer rather than the vendor here, so trying to pay for a 25 peso quesadilla with a 500 peso bill is a bit rude. Make sure you have change ahead of time.

Another dynamic that might feel unusual is that you pay at the end. Trying to force the payment up front undermines the vendor’s hospitality—which, even if it just means you’re sitting on their upside down bucket for ten minutes, is an important part of the experience. When you’re done eating ask, “¿Qué le debo?” (“How much do I owe you?”)

When you’re ready to leave, it is polite to say provecho—which means something akin to bon appetit—to the other people at the stand if they are still eating.

There are infinite kinds of puestos in Mexico City and beyond, including gorditas (stuffed masa pastry), many kinds of birria (soup/stew), tortas (sandwiches), and even sushi, that didn’t make this list. The below is a a general breakdown of some of the best kinds of puestos—street food stands—with a few with suggestions of where to try them.

Mostly only available in the mornings. Look for the tall metal drum they are kept in. Oaxaqueños—tamales wrapped in banana leaves instead of corn husks—are a bit more moist. Past morning, you can still find guys on bikes selling them and flag them down. The bikers have a strangely high-pitched looped recording that’s easy to pick out: “tamaaales, oaxaqueeeeeños calientitos.” For vegetarians, try rajas—peppers with cheese. They may ask you if you want your tamal with bread or not. Known as torta de tamal, or guajolota, these sandwiches are a Mexico City-specific phenomenon. It’s a local favorite, but the bread tends to be extremely dry.

Corn or hominy (thicker, chewier corn) with mayo, butter, cheese, lime, salt, and chili on the cob (elotes) or in a cup (esquites). The quality of these stands varies a lot and a bad one can be pretty disgusting, but a great one is hard to beat. Luckily, they’ll only run you about a dollar, so it’s worth taking a chance. Trust in the mayo and butter combo.

You can ID a quesadilla stand by the giant circular comal—traditionally clay but usually metal, these are the pre-hispanic cooking surfaces still used all over Mexico. Try to find the stands making their own tortillas fresh. You will see them either patting them into creation, or see the masa in a Tupperware or some kind of container. Try flor de calabaza (squash flowers), huitlacoche (corn fungus), or quelites (wild native greens). Be aware of another Mexico City-specific phenomenon: you actually have to specify that you want cheese in your quesadilla. If you order a mushroom quesadilla, it will only come with mushrooms (the line between cheese-less quesadilla and large taco is very blurry). You have to say “[ingredient] con queso.” 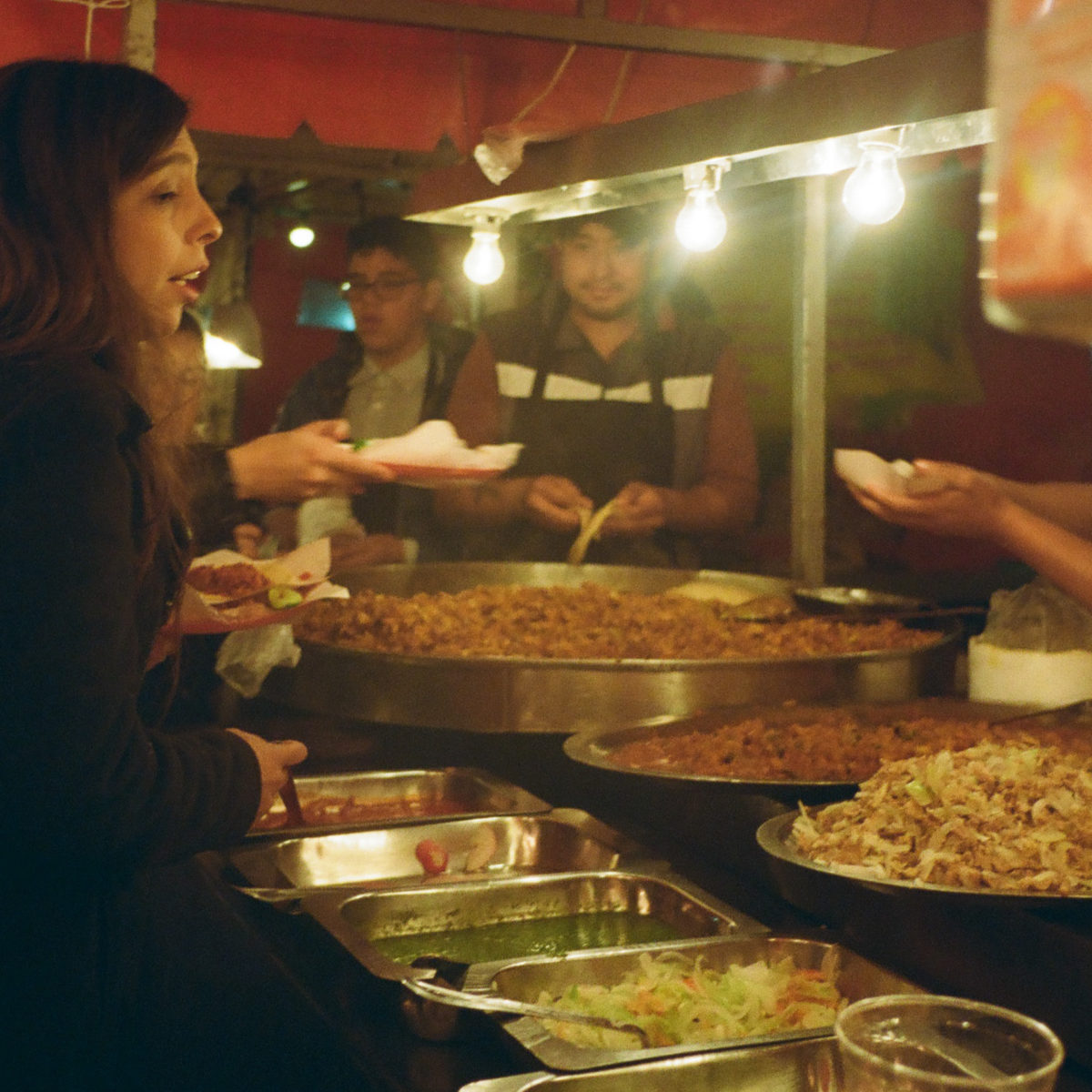 Late night tacos at a stand nearby the grounds of Corona Capitol. Photo by Chona Kasinger.

Usually sold at quesadilla stands but sometimes on their own, these are tear-drop-shaped corn pods that are usually blue. They come stuffed with fava bean, chicharrón (pork rind), or requeson (ricotta). They cut the pod open and top it with onion, nopal (cactus), salsa, cream, and fresh cheese on top. Delicious, but do not plan to pick one up as a snack before a meal. It will keep you full for a while.

These are the taco stands that have five or six (sometimes more) stew-filled tins displayed next to a tin of rice that will have a hard boiled egg sitting in it. Careful with the guessing and pointing at these stands because a lot of the options tend to be organ meat. You can order each taco with or without rice. The best part about these stands is that they usually have cactus, cucumbers, and spicy pickles that you can pile on top of your taco (key because they cut through the grease!)

These are sold out of a basket (that’s what canasta means) on a tiny table or just off the back of a bike, so keep your eyes peeled for the woven containers. They are alternately called tacos sudados, or “sweaty tacos,” because they are slathered in pork fat. They’re usually filled with potato, beans, and chicharrón. Order it with salsa and/or spicy pickled veggies, which cut the grease beautifully. 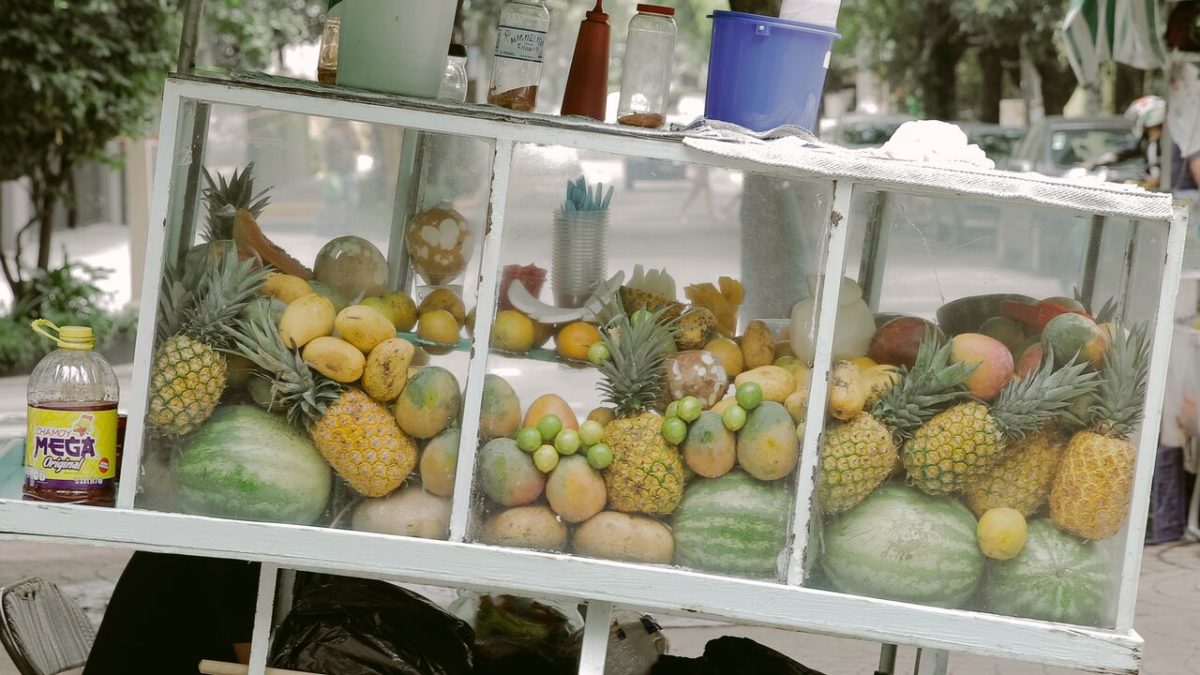 A slow-cooked, barbecued meat (usually ram or pork), barbacoa is usually only available on weekends and sold by people who drive into the city from outer provinces. Get a consomme (broth) and dress it with the onions, cilantro, and lime on the table. If you’re squeamish about chunks of fat, order it maciza (solid).For something more flavorful go for the espaldilla (shoulder). For full fat try the costilla (rib). On top of the onion, cilantro, lime—and salsa, of course—you may want to add salt as they don’t salt the meat ahead of time.

Can’t forget tacos. So. Many. Tacos. These stands will have an assortment of meats, sizzling in their own grease. Saudero (beef) for the squeamish, campechano (mix of beef, pork, and rinds) for the adventurer.

Con todo at these stands means with lime, salt, and chili. You can usually pick any combination of the fruits and veggies that you see in the stand. If you don’t see a cup prepared with what you want, just ask and they’ll cut it up for you. Same goes for juice (they use purified water). Jugo verde has pineapple, cactus, parsley, orange or grapefruit juice, and is not too sweet. Warning: a large will be a whole liter!