3 Artists and Activists to Watch in Louisville's Hip Hop Scene

Few performers in the Louisville hip hop scene would call themselves “activists,” but it’s difficult to deny the spirit of advocacy that permeates. For Issue 07 of Here Magazine, we spoke with three organizers and artists who share a more explicit connection to social activism by identifying problems in their community and working to solve them through hip hop. 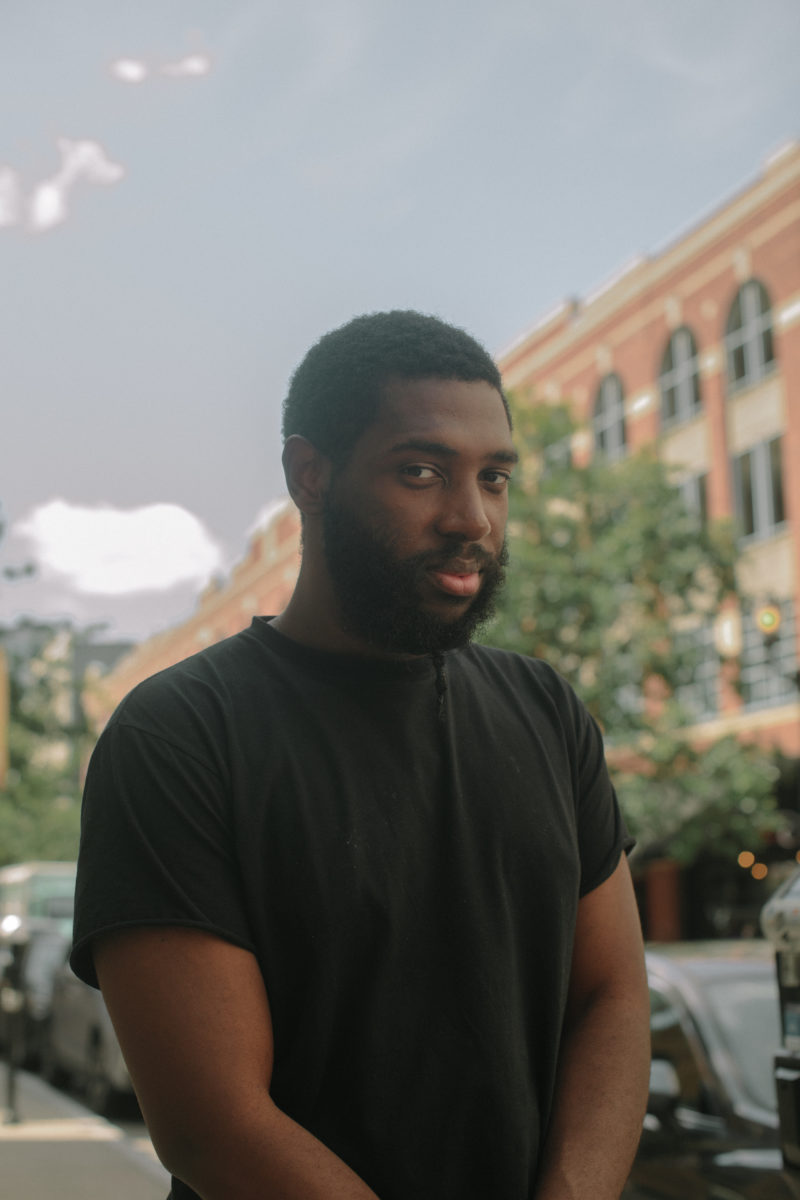 Jecorey Arthur counts fellow Parkland native Muhammad Ali as one of his greatest inspirations. "Ali used boxing to have a louder voice, to have a bigger stage, to do the work I believe he was more passionate about," he says. "I have hip hop, he had boxing."

Education is an invaluable tool for Jecorey Arthur, the self-described “band nerd and orchestra dork” better known within the hip hop community by his stage name, 1200. Born and raised in Parkland, West Louisville, the 26-year-old music teacher, rapper, and classically trained percussionist knows what disparity looks like—and he knows what kids in his community will respond to in the classroom. “If I go into a school and they’re only listening to Lil Uzi Vert, that’s fine, but as soon as I can make a connection between Lil Uzi Vert and Joseph Haydn, they deepen their understanding of these two musicians—these two composers in their own right—and they discover all the things that they have in common.”

These days Arthur’s rap performances feature local orchestras and other influences from his time in marching band as a high schooler and later as a student at the University of Louisville. “When I was a kid, doing classical music, people thought it was lame. And then when I got to college and was pursuing hip hop, too, people were critical and said that it’s not real music,” he says. “But I’m using my hip hop to amplify my voice, to get an audience, so I can do the work that I’m really passionate about, which is helping kids. Hip hop is the most popular genre in the world; unfortunately, it’s oversaturated with a lot of misogynistic lyrics and materialism. […] Not much to uplift people. So I’m going to be the voice of reason. I’m looking at creating a new genre. What does it look like when you have trap drums mixed with a Dvorák symphony in the background?”

Above all else, Arthur’s work encourages his students and audiences to look past their differences. “When you break down the music, the rhythms, it’s all just sheet music, it’s notes on a page,” he says. “Western music only uses 12 different pitches. We’re all using the same 12 notes. So why segregate music [into genres]? Why make it different?” 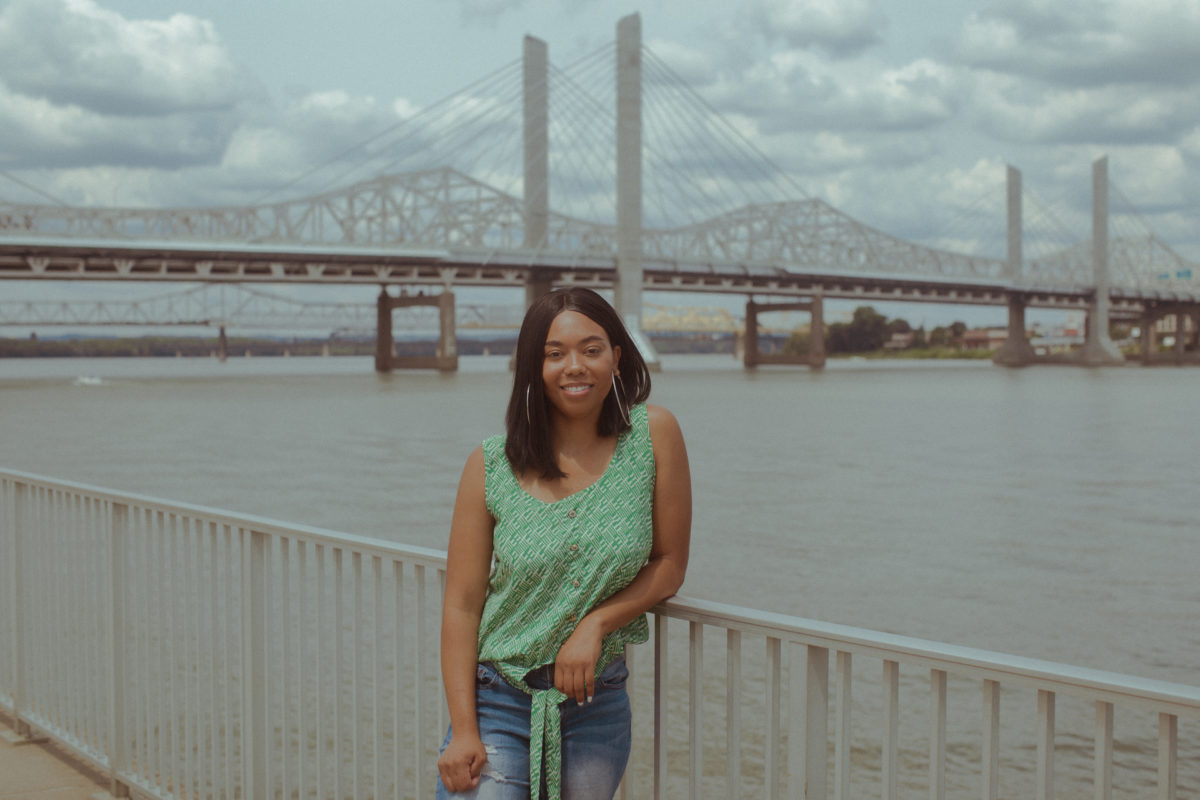 Tra'Shelle Brown, who performs as DJ Bombshell, is exceptionally proud to call West Louisville her home. "It's always been my goal to give back to my community," she says.

“My platform is girl power.”

Save for a quick hello, this is the first thing DJ Bombshell says to me when she sits down at our table in Waterfront Park. Born Tra’Shelle Brown, the West Louisville native was raised by what she calls “the beautiful struggle,” where socioeconomic disparity helped shape a strong community of innovators and creators. “I am a product of the West End, but I’m also a person who is ambitious and is trying to create things. I want to debunk these stereotypes,” she says.

In particular, Brown has an interest in uplifting young women artists and thinkers from West Louisville. Her iHeartMedia show on 93.1, “WCW” (Women Crush Wednesday), features her favorite female songstresses and rappers in a standard mix show format—inspired by the satellite radio she used to listen to as a kid. The other six days a week, when she’s not playing gigs around town,  working her second job at Ford Motor Company, or taking care of her six-year-old son, Brown will perform for groups that align with her politics, such as GLOW (Girls League of the West), which “focuses on feminism and Afrocentrism,” and Girls Rock, a music summer camp where girls learn an instrument and perform at a showcase.

“When I DJ in front of young girls, I’m saying, ‘Hey, I work in a predominantly male industry, and you should feel like you can do whatever you want with yourself and your life,'” she says. “Usually when I talk to girls, they’re just in awe that I’m doing what I do.”

Though Brown has worked hard to get her DJ career to where it is now, she credits other artists with helping to get her name out—in particular, rapper Sasha Richmond (who performs as Sasha Renee). The two women are in agreement that the hip hop community could be working harder to include and uplift more female voices. “I make it my business to know all the female artists in the scene doing their thing, because with my platform, I wanna make sure it stays diverse. I have to be inclusive,” Richmond Asserts.

When I ask Brown what kind of a Louisville she wants her son to inherit, she harkens back to the idea of “the beautiful struggle.” “I don’t see things through rose-colored glasses,” she assures me. “But I don’t see it as all dark either. I see the bad and the good. My son is blessed to come from these great people and to have this great perspective. For him and for West Louisville, I’m going to use my platform to say things that I think are important.” 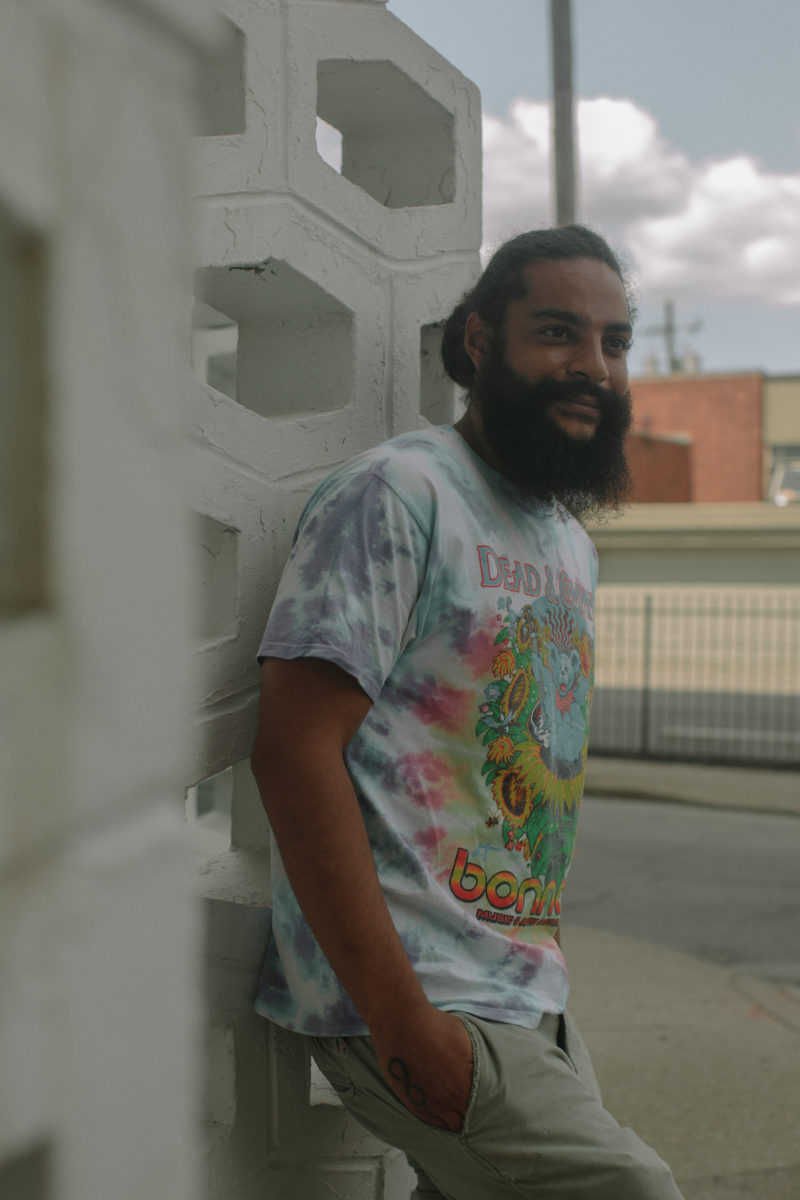 Tay Gunsauley spent a summer in the South Bronx with antiestablishment hip hop collective Rebel Diaz. "I used to say ‘conscious rapper’ a lot, and thought about people as ‘conscious’ or ‘not conscious’—but [Rebel Diaz] taught me that everybody is conscious—just because someone can’t speak to the neofascist system or the capitalist structures doesn’t mean they’re not conscious of the issues that they’re going through." 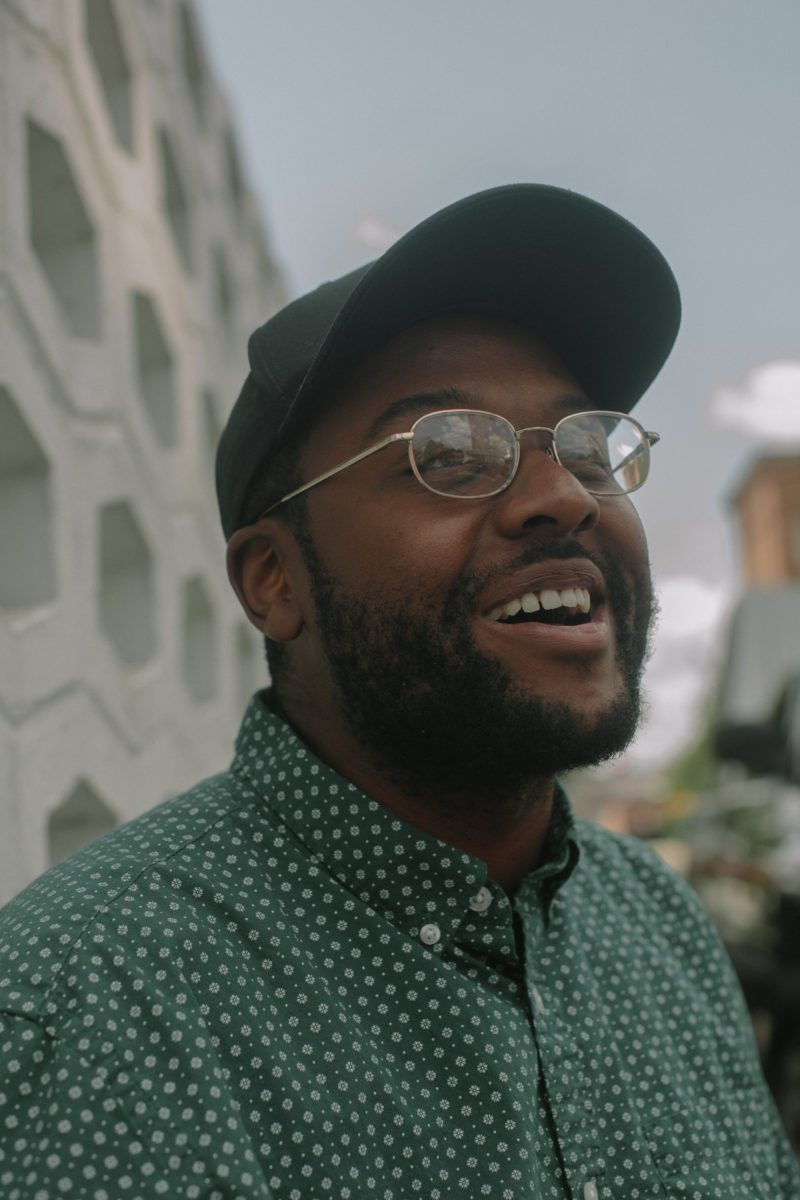 Before starting work on LouiEvolve, Dave Christopher moved to Louisville from Gary, Indiana, and started working at an organization that his dad founded called Amped. "It's a really dope program in the city that uses hip hop to teach kids all different types of things," he says.

Tay Gunsauley is an ex-gymnast with a speaking voice that almost purrs and a tendency to finish most of his thoughts with a compulsive “you know what I’m sayin’?” He’s a 20-something Deadhead who grew up on a dairy farm in northern Kentucky and moved to Louisville for school, where he changed his major from finance to philosophy and became an anticapitalist. A summer spent in the South Bronx taught Gunsauley about the kind of community he wanted to foster at home: a vast artist network with community-wide support and engagement. Back in Louisville, he connected with Dave Christopher, a rapper and fellow activist, to create LouiEvolve, an annual music festival and hip hop co-op.

The festival, which has quadrupled in size since it began in 2016, is a product of wanting to uplift community voices. Before the festival’s inception, the founders sat down with their neighbors for a roundtable discussion to determine what people actually wanted to see from the city’s hip hop scene. “People were wanting an event that showcased all the talent around the whole city, so we immediately got to work on that,” Gunsauley says.

The founders have goals beyond the launch of the largest hip hop festival in Kentucky. They’re thinking long-term about contributing to an ecosystem in which the creation of high-quality music is less expensive, making it more accessible to disenfranchised communities with important stories to tell. With a recent grant from the city to start an artist co-op, Gunsauley and Christopher are committed to running their for-profit and non-profit businesses democratically. “All the artists have a say in [LouiEvolve] as it grows. It’s more about the people and the community, making sure that artists can produce their work without going broke, you know what I’m sayin’?”

Both Gunsauley and Christopher are involved in numerous efforts for the greater social good of Louisville, whether it’s participating in literacy programs for black boys or facilitating conversations about gentrification. But they also see LouiEvolve itself as central to their activism. “I would like to see more hip hop artists straight speaking truth to power, but the activism in LouiEvolve is implicit, you know what I’m sayin’?” Gunsauley says. “It’s about having some sort of autonomy over our scene.”

Click here for our deep dive on the Louisville hip hop scene at large.