For Here Magazine Issue 07, writer Liz Bell Young reflects on how a 1993 Volvo sedan was more than just a form of transportation as a military wife in Italy—it was the keeper of her identity.

When our car finally arrived in Italy, we’d already lived months without it; riding bikes while we waited, borrowing a Peugeot, meandering through crowds, and trying to find footing in a country that wasn’t ours yet, but needed to be.

My husband had been stationed in Italy by the American military. We accepted over the phone, thrilled at our good fortune to avoid being landlocked by suburban-scapes and strip malls in some anonymous town in the States. Ryan and I had just married, barefoot on a small island, our families the only guests. My dad held onto my shoulders at the end of the aisle, whispered his blessing, slowly let go.

We ate apples down to the seeds as we sat on a curb and watched movers cart away the little we had then: a couple twin mattresses, my books, his maps, our new ceramic bowls pulled off a registry and packed up before used.

A car is like your time capsule. If you hold onto one long enough, it will play back the history of you.

We shipped our 1993 Volvo sedan from a port in Virginia. It was a car my dad gave me—a golden Volvo, inside and out. He’d bought it years ago off a distant coworker who’d left a legacy scent of Marlboros and long days spent at a manufacturing job. My dad scrubbed the hell out of it before he gave it to us; polished the chrome while I stood behind him on the driveway, heartsick already for what I was about to leave.

I had said it so many times, embarrassed by my dyslexic sense of direction. When I was growing up, my dad would sit down with me on the garage step, pull off a Post-it note, and, with his sketched maps and tidy capital letters, detail the turns and stops and high-vis landmarks to get me from A to B. Then he’d turn over the Post-it and write out the directions in reverse—I never needed to ask—because he knew finding my way back home would prove just as hard. He was a protector. The kind of father who dropped me off at overnight camp and stayed longer than any parent was supposed to, quietly walking the perimeter, making sure I was finding my place.

The glove box, then, slowly filled with his directions: How to change the oil.How to get home from college in a snowstorm. How to find Pittsburgh in the dark.

“You get everything out of this thing?” the inspector asked me at the shipping port, swiping a hand over the Volvo’s shined hood. I nodded.

I wanted to tell the inspector to be careful, be kind. He slapped an approval code across the window and drove it away. I watched the black strap of the seat belt, caught in the door, drag across the parking lot to a cargo boat off in the distance. 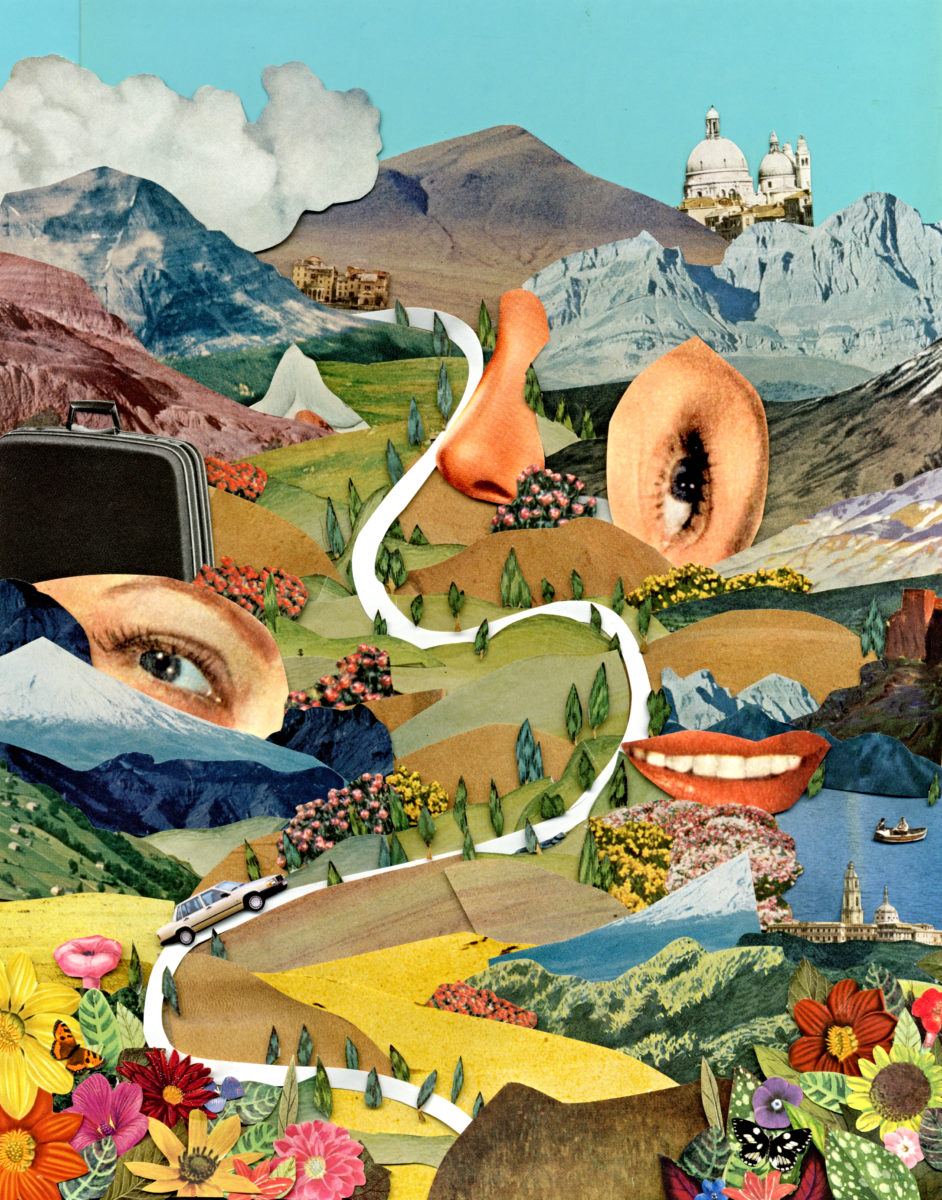 Ryan and I arrived in Vicenza, Italy, and nearly fell to our knees in awe: the stonework, the tiny spoons served alongside cups of espresso, those old green patina rooftops on basilicas and cathedrals. After Ryan got off work, we would crouch in the city bars on top of wooden barrels, drinking peach-toned aperitifs, and plot how we’d live our lives.

“Giovanna is going to boss you around that garden, so don’t you dare tell her you’re writing a book,” Ryan teased, already sensing the fiery love and close watch of our new landlord.

Months later—after the sheen of novelty had worn off and we were knee-deep in the logistics of setting up life in a new country—I picked up the Volvo from the vehicle inspection point.

I was so relieved to see it, so suddenly at ease being back behind its steady wheel, that I drove it to a sunny spot outside the inspector’s gate and didn’t get out, pressed my face into the golden cushions. The scent of everything I’d left behind was still caught in the golden seams: our family dog, a thousand maple trees, soccer cleats. My father’s handwritten directions to places I could no longer reach were tucked safely in the glove compartment.

I’d have to figure out what life was going to be after all this unexpected separation, this fast changing of countries and plans, when we were tired of wandering but didn’t yet have the choice to stop.

I drove the Volvo back to our rented house and pulled the gate closed behind us. “Che bella!” Giovanna called out her window. Next to her Mercedes, I wondered what beauty she saw.

But days in Italy were beautiful. I found a job. Ryan was a great soldier. The tomato garden grew and I started the novel. On weekends, we wound the Volvo through the mountains of France. Lost pieces of the underbody in Austria. Attached a bike rack to the top and trusted it with race days, houseguests, ice storms. Neighborhood dogs rubbed against the metallic doors. The scents of what we’d left behind were overcome with chocolate brioche, overpriced petrol, two people growing up.

A car is like your time capsule. If you hold onto one long enough, it will play back the history of you, of those you brought with you, of the times you want to forget or safeguard forever.

A time capsule that carried us to Giovanna and Pino and their chaotic house of bossy love.

Brought us to city overlooks, strange forest campgrounds, tiny restaurants buried in the hills where dogs ate at our feet, under the tables.

Took me to long meet-and-greets with military wives, where I wondered if I would ever fit in.

Pulled me through the weeks when Ryan was in other countries and I was lonely and restless and just needed an ounce of human interaction to hold off the darkness of isolation.

Carted me away from the clinic where the doctor mistakenly told me I was pregnant with a baby who had birth defects, but the news wasn’t meant for me—it was for another Elizabeth Young on the military post. And so I spent another afternoon buried in the golden seats, grieving for this woman who would get the news and also wishing the baby had, in spite of everything, been mine.

Then it was a car that carried us to the start of a war. In the weeks after 9/11, it took us to the base of a mountain in Northern Italy where we parked, not knowing when we’d drive again. Where we stayed up night after night on an airfield readying an entire brigade for deployment. Before the soldiers left, I walked down the long line of Humvees and trucks filled with ammunition and supplies. Drivers waited for hours on end and I didn’t know what else to do except hand them food I’d plucked from vending machines while they sat in line, in position, counting down the hours until they were loaded onto C-17s and air-dropped into dark desert battlegrounds with night-vision goggles.

Four years passed and it was time for us to leave Italy, even as the war continued. We were changed, though not for the last time, we would soon learn.

We packed up our house, hugged our beloved Giovanna, signed papers. The military said they’d ship one car back to the States, no cost. For a moment, we considered an upgrade—trading in the Volvo for something fast and light and unmarked. Ryan suggested Ducati motorcycles.

We shipped the Volvo home. We drove it around our hometown for a few months while we hunted for jobs and a place to live, until one day the mail arrived and Ryan held orders in his hands calling him back overseas to the war, back to a time and place we thought we’d never return. He quietly packed a Kevlar helmet, got vaccinations.

I filled the Volvo with everything important except for Ryan and drove back to my parents’ house, back to the driveway where my dad and mom stood waiting to comfort and love me through the next year and a half.

I’d have to figure out what life was going to be after all this unexpected separation, this fast changing of countries and plans, when we were tired of wandering but didn’t yet have the choice to stop.

When Ryan finally returned from his deployment, he filed off a bus filled with a hundred other soldiers and I ran toward him and he held me and smiled against my face and said he would never leave again. We were finished.

For a couple years more, we drove the Volvo around our hometown. The mileage hit 200,000 and we got a shiny congratulations sticker from the carmaker. We sold the old bike rack off the top, got snow tires, and added a carseat for our firstborn, Moses Lee.

Then we gave it away—the Volvo and the sticker. Gave it to a distant relative who needed to get to Los Angeles, he said, to be an actor. He didn’t have much so we polished the car inside and out and handed him the keys like my dad did for us, and he was off. I stood in the driveway with Moses in my arms and watched them retreat: 200,000 miles of seam-ridden gold in the low light of Cincinnati, marked by every year of us, my dad’s handwritten directions still in the glove box.