Kawaguchiko's peaceful atmosphere makes it the perfect place from which to explore Mt. Fuji.
SnapshotTiana Attride

Kawaguchiko, Japan is our Travel Crush this week. We’re exploring the easiest way to access Mt. Fuji—the volcanic muse for artist Hokusai, whose 36 Views of Mt. Fuji is one of the most famous series of paintings to emerge from 19th century Japan.

My journey to Kawaguchiko begins not in Japan, but in Boston, Massachusetts, during spring break of my first year in college. While visiting my grandmother, I spent an entire day at the Museum of Fine Arts—the first place I recognized how much I love Ukiyo-e—Japanese woodblock art—as well my favorite artist to this day, Hokusai. The museum houses an enormous collection of the Edo-era painter’s work, including prints from his most famous series, the 36 Views of Mount Fuji. (You likely recognize the first print not for Fuji, but for the wave.)

Not unlike most of the world, I’ve always been fascinated by Japan. I took language lessons in high school and college; I imagined spending a few years there teaching English with JET; I listened to niche indie bands like Yogee New Waves and Lucky Tapes, and legendary hip-hop producers like Nujabes; and of course, I indulged in anime like the nerd I am. 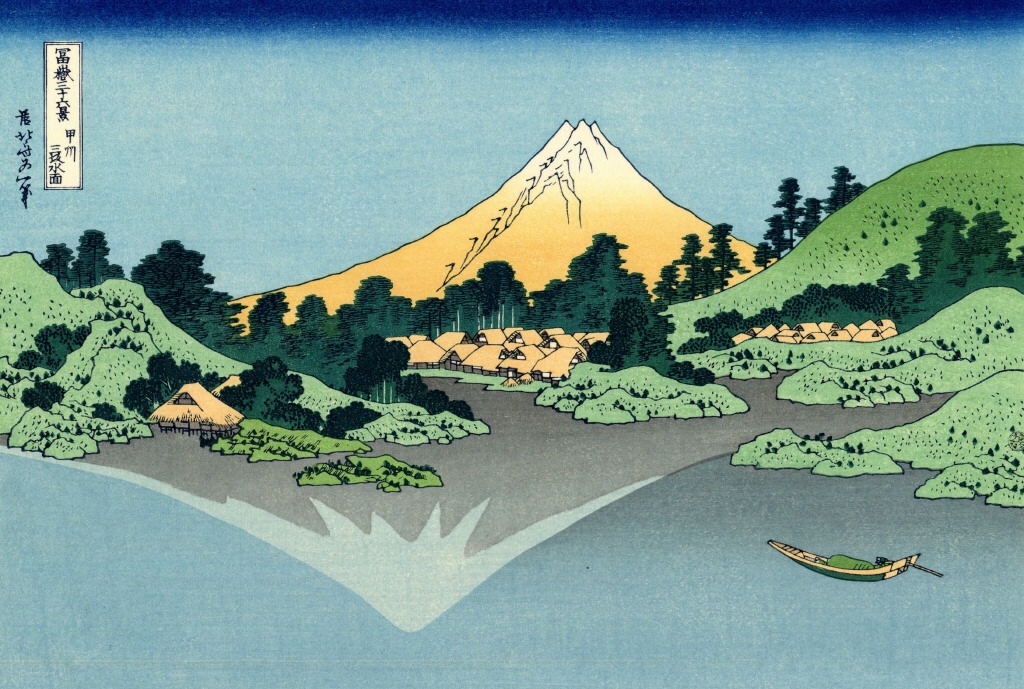 "Fuji reflects in Lake Kawaguchi seen from the Misaka pass in the Kai Province," from Hokusai's 36 Views of Mt. Fuji. 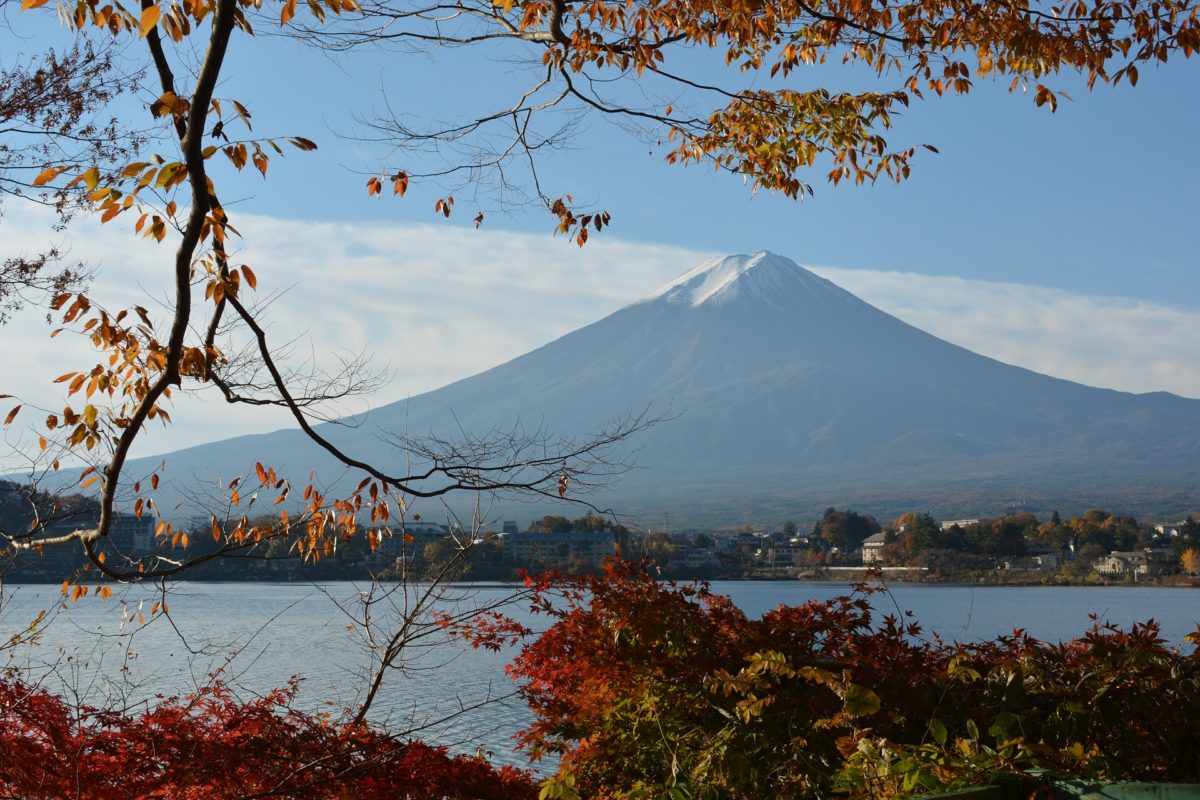 Mt. Fuji as seen from the shores around Lake Kawaguchi in fall.

“Innumerable walks of life are connected by this awesome natural landmark.”

But Japanese artwork captured my heart most of all, and especially 36 Views, which documents everyday life in 1800s Japan. Each image features Mt. Fuji in some way overlooking scenes of laymen, warriors, sailors, and more, demonstrating how people from innumerable walks of life are connected by this awesome natural landmark.

Kawaguchiko, also known as Lake Kawaguchi—featured in the set’s 35th painting, with Fuji-san reflected on its surface—is the most accessible of the five lakes that sit at the volcano’s base. Not far from the busy streets of Tokyo, less than an hour away by the Shinkansen bullet train, here, find a perfect jumping-off point from which to explore Mt. Fuji and understand why it has inspired hundreds of years of art and spirituality. 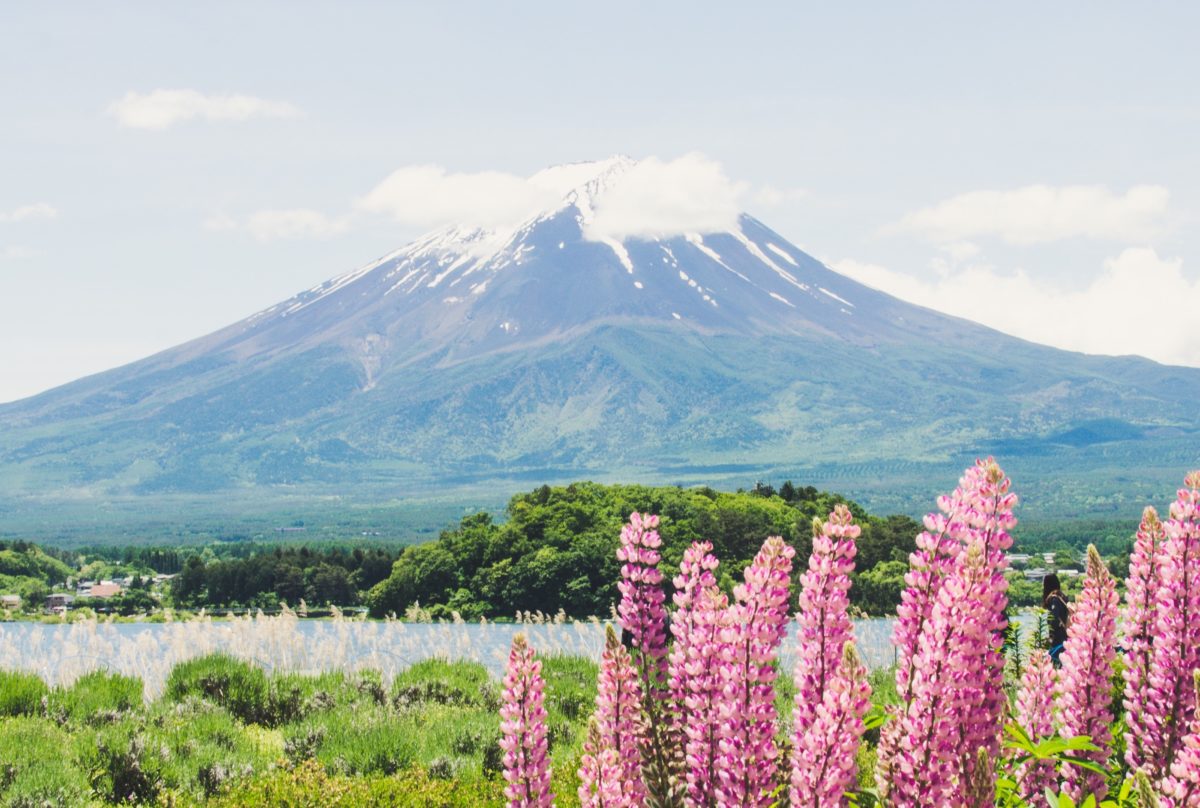 What to eat on Lake Kawaguchi 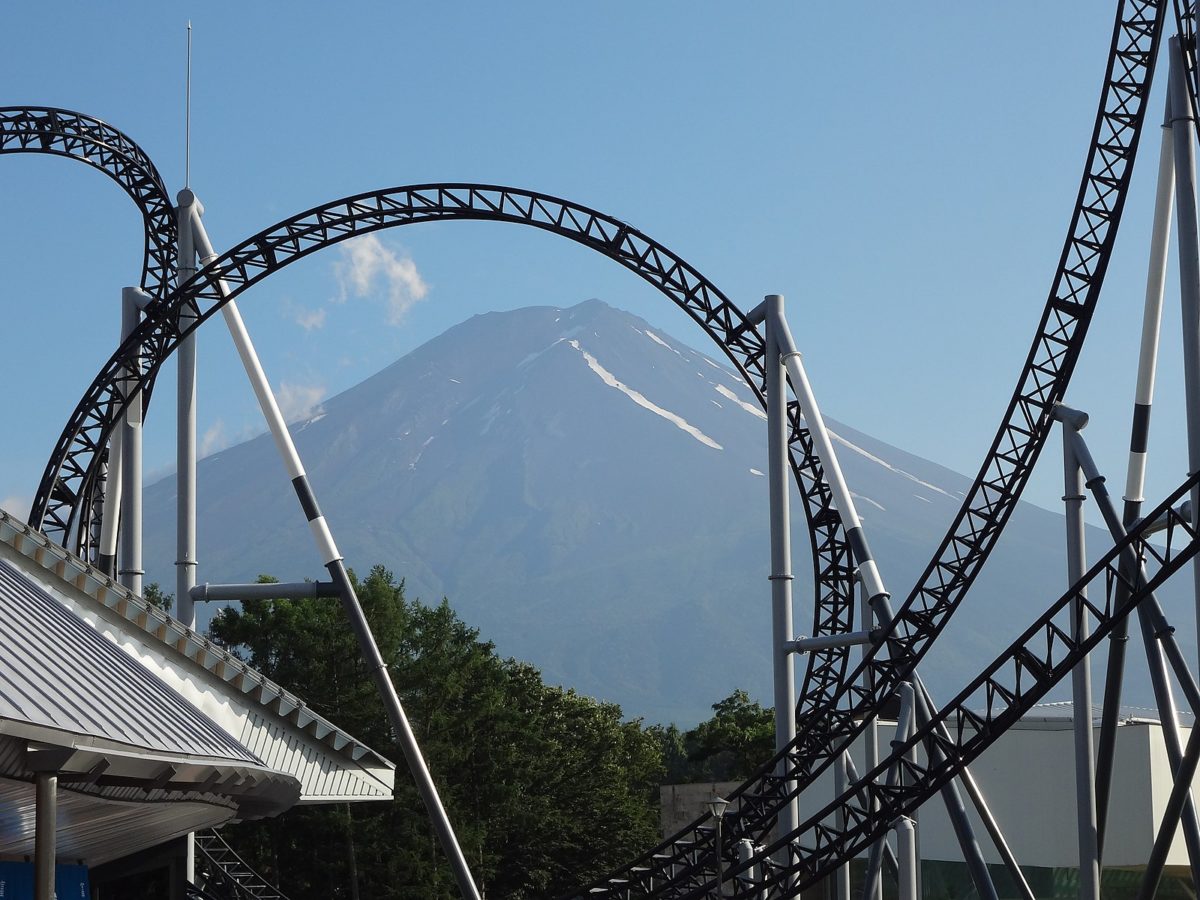 The steepest rollercoaster in the world is at Fuji Q Highland amusement park. 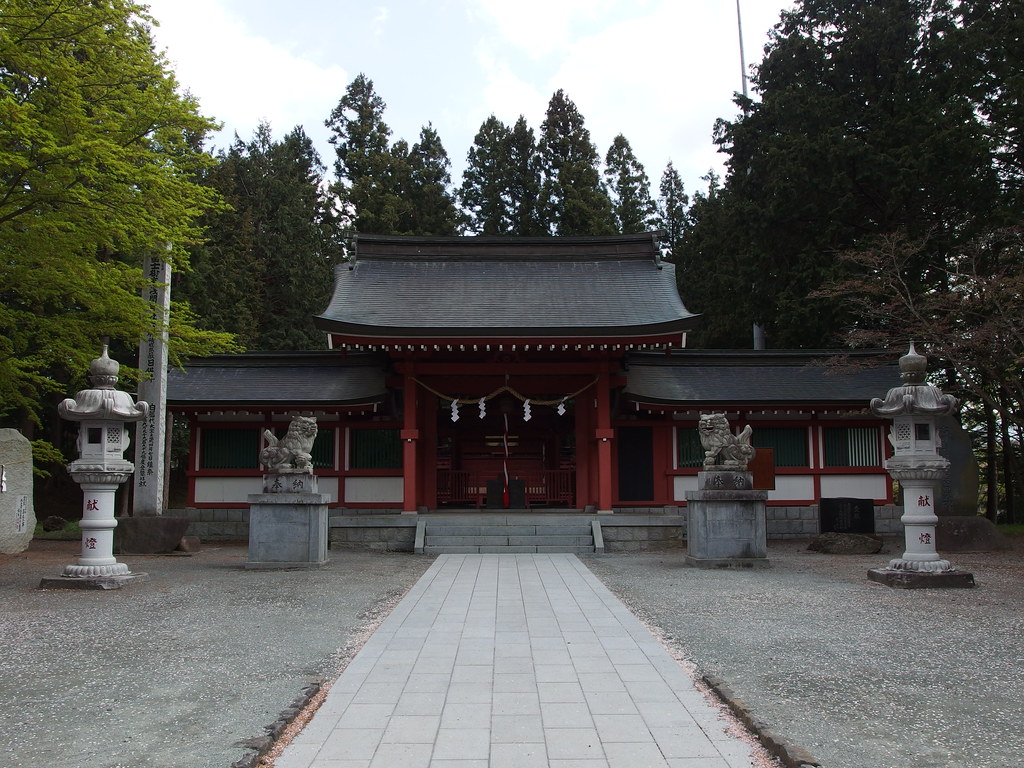 What to do near Lake Kawaguchi

The possibilities are endless. Visit one of the many shrines like Kawaguchiko Asama or Fuji Omuro Sengen; seek thrills at amusement park Fuji Q Highland, home to some of the world’s tallest and fastest roller coasters; and of course, schedule an early morning hike and ascend the summit of Mt. Fuji at sunrise. 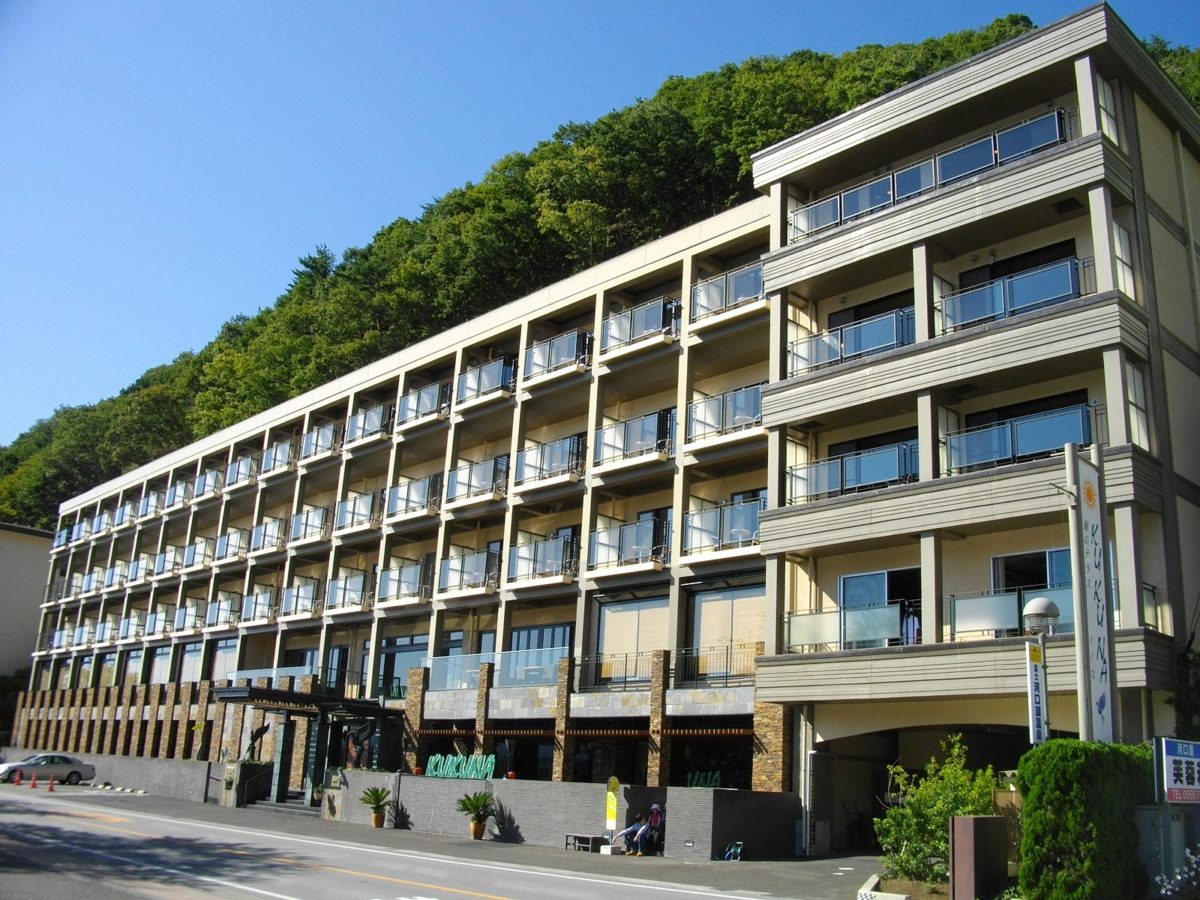 Where to stay on Lake Kawaguchi

My hotel picks center around places to take a dip in an onsen, a Japanese hot spring bath, with a view of Mt. Fuji (I’ve dreamt of this moment for years, so I’ve got to go all-in). The most spectacular views appear to be from Kukuna and Ubuya, two hotels that look out over Lake Kawaguchiko to the mountain beyond.