Considering its glossy, luxe exterior, “village” may not be the proper descriptor for this new cultural hub located in the heart of urban Doha. While its name implies a certain provinciality, Doha’s brand new Katara Village is a stunning show of architecture, modernity, and global unity. Under the leadership of Sheikh Hamad Bin Khalifa Al Thani, the Father Emir​ of the State of Qatar, Katara Cultural Village was erected this past year specifically as an homage to global diversity and multicultural understanding.

Upon arrival, guests drive up from the main road into what feels like an ancient walled city—if that city were immaculate and ultra chic, that is. Inside the walls live dozens of galleries and event spaces, restaurants, theaters, and even a film center meant to inspire Qatari youth to pursue filmmaking. Exhibitions range in subject from patriotic tributes to the royal family, to works from local potters and painters, to the more interactive—such as the current “Skate Girls of Kabul” at QM Gallery Katara. Each space has its own unique architecture that pulls inspiration from several different parts of the world. Perhaps the best example is the Katara Masjid, or mosque, that was designed by world-renowned Turkish architect, Zainab Fadil Oglu. 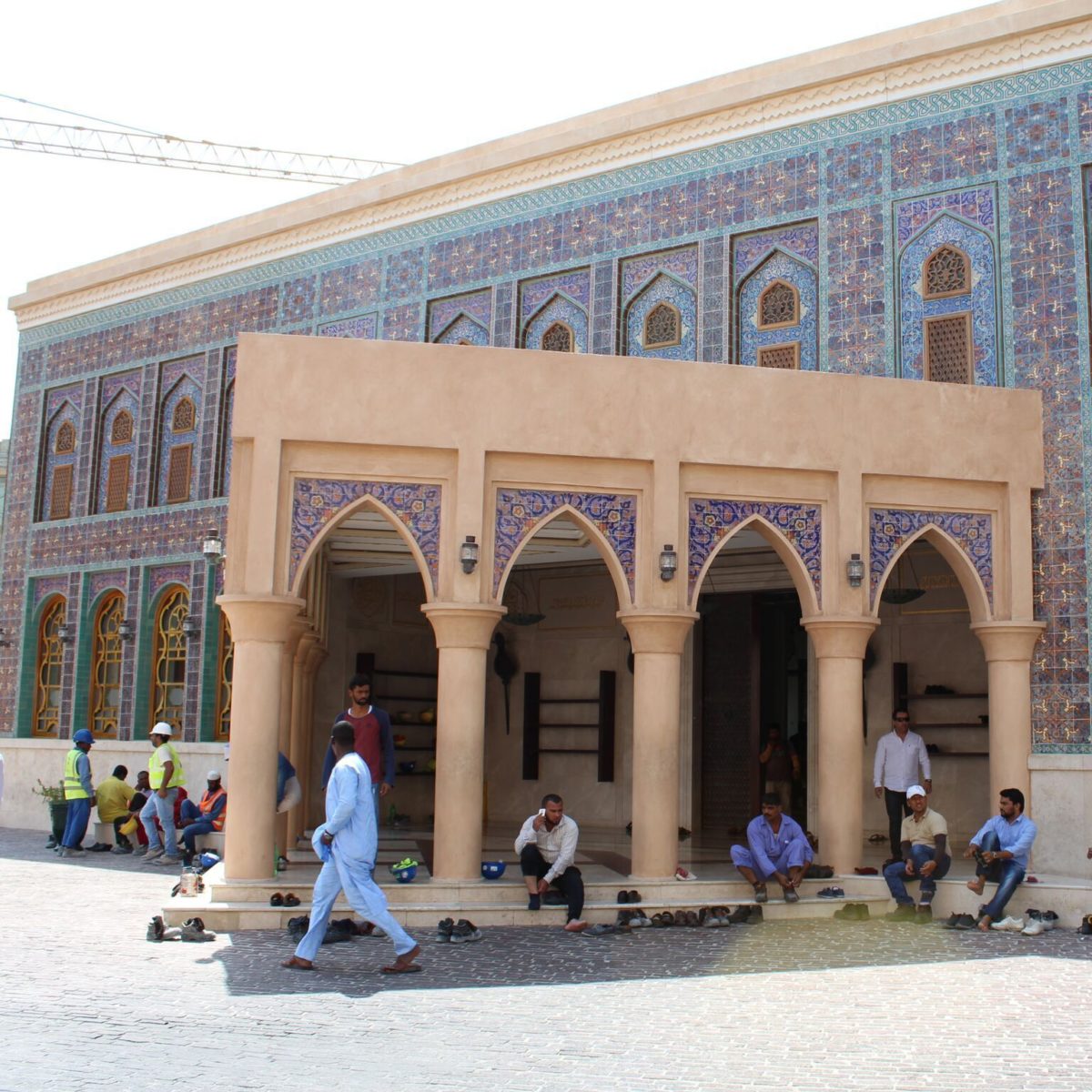 Men removing their shoes outside the Turkish-designed Katara Masjid, or mosque. Photo by James Murray. 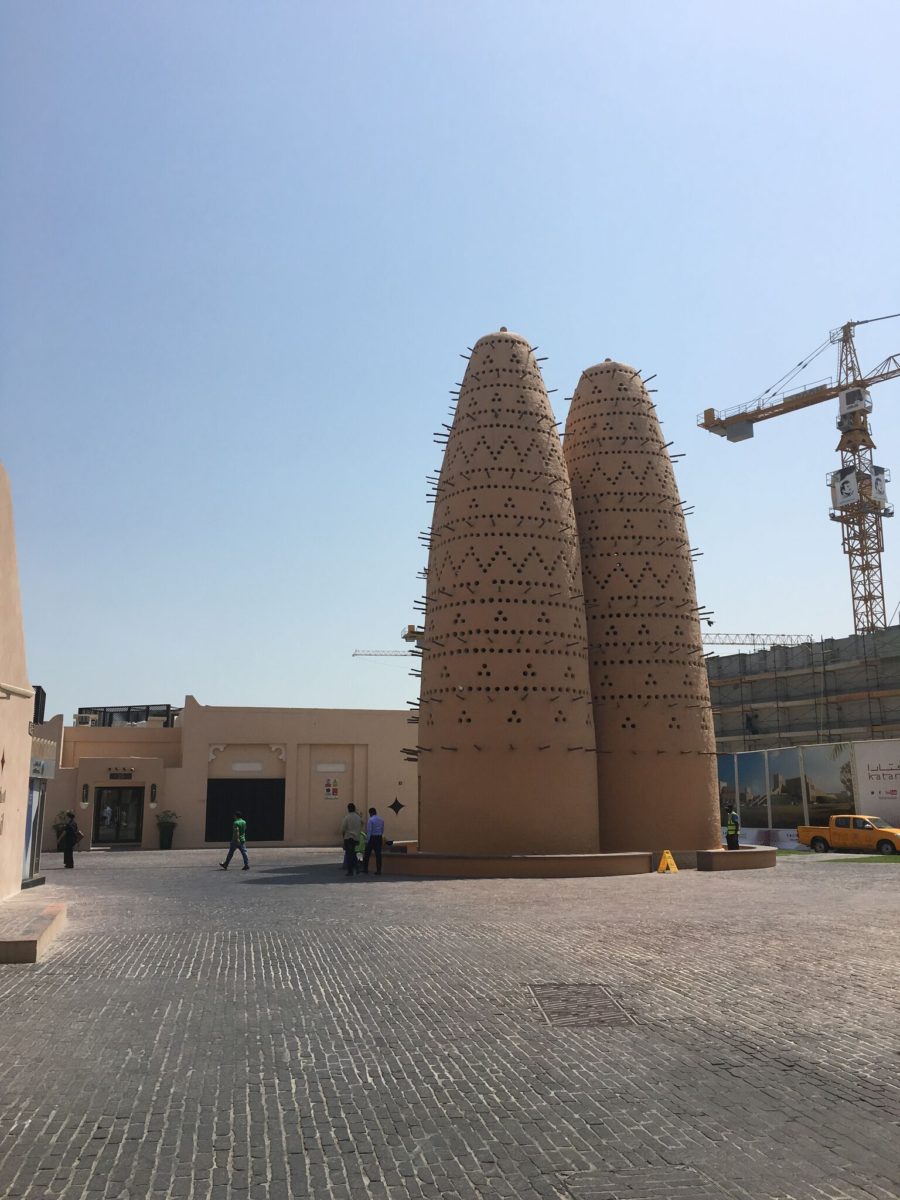 Outside the Turkish-designed Katara Masjid, or mosque. 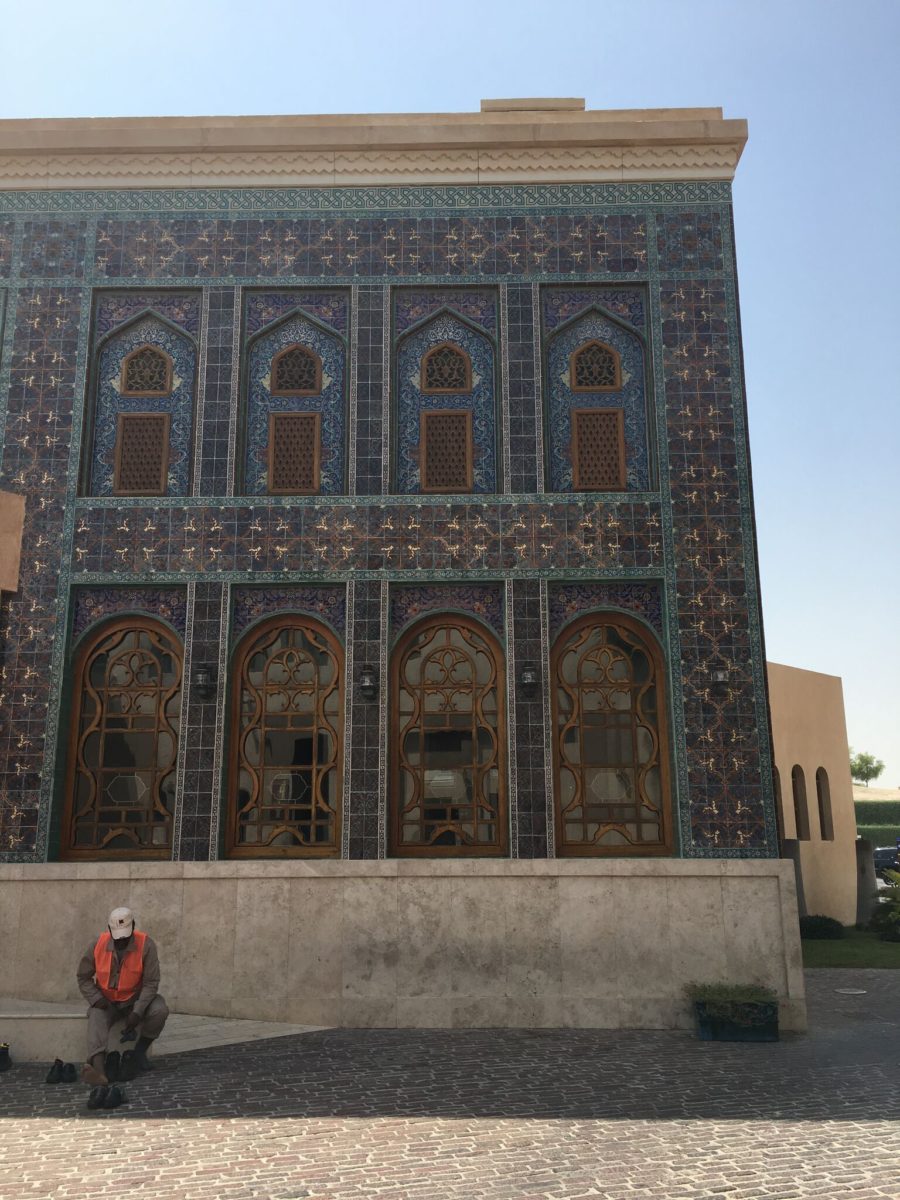 Outside the Turkish-designed Katara Masjid, or mosque.

Inside “Skate Girls of Kabul,” viewers are treated to a winding exhibition by British photographer Jessica Fulford-Dobson featuring the playful and determined young women in Kabul, Afghanistan who have taken up skateboarding as a hobby and passion. Where other outlets are limited, these girls—introduced to the practice by Skateistan, an Afghan charity providing disadvantaged children with a means to stay in school—have taken to skating as a method of self-expression. Amongst the impressive collection of photographs inside the gallery is an interactive halfpipe that children are allowed to play on.

As for food in the village, there’s no shortage of diversity; go for Egyptian food at Khan Farouk Tarab Café, Armenian and Lebanese cuisine at MAMIG, or Palestinian food at Ard Canaan Restaurant, owned by a proud Palestinian family. Once inside Ard Canaan, guests are treated to a fully functioning shop with Palestinian clothing, spices, and elegant souvenirs before they are seated in a dining room modeled after a traditional, luxurious Palestinian home. Central to the vision of Katara Village as a whole, these authentic cultural experiences are an added delight to an already intellectually stimulating day in the village. 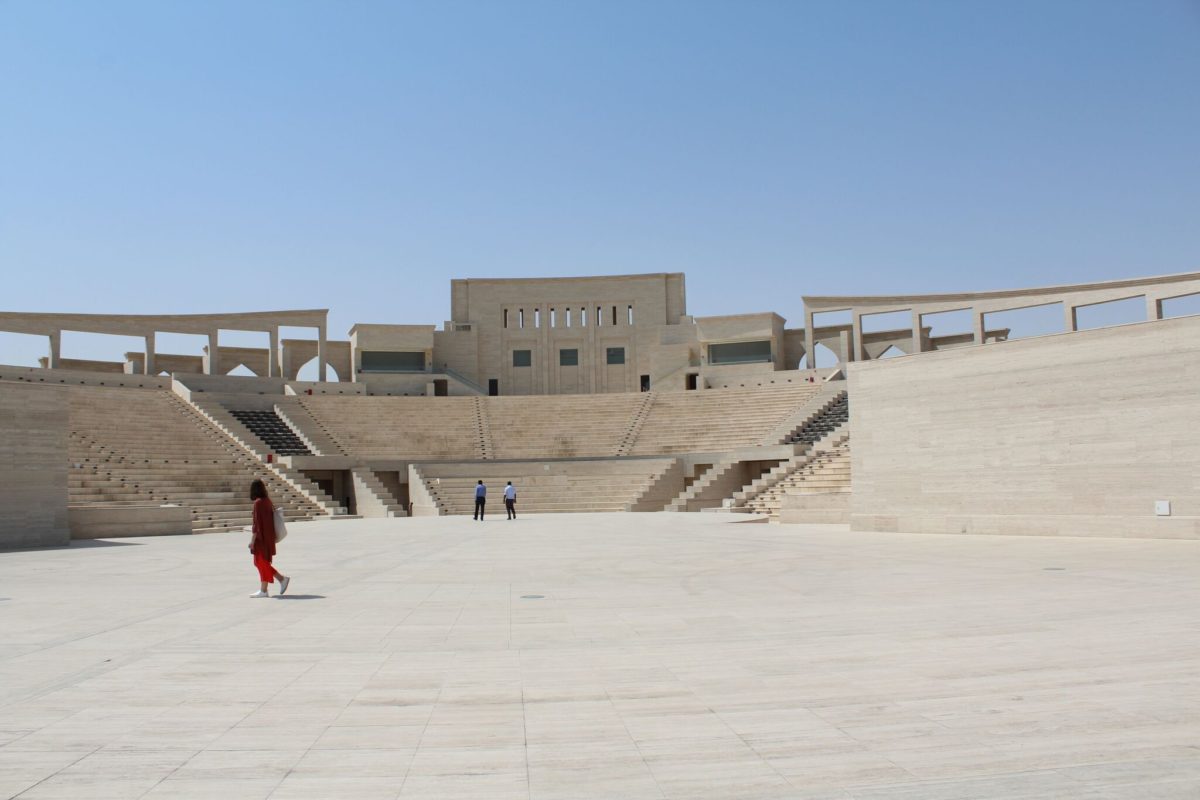 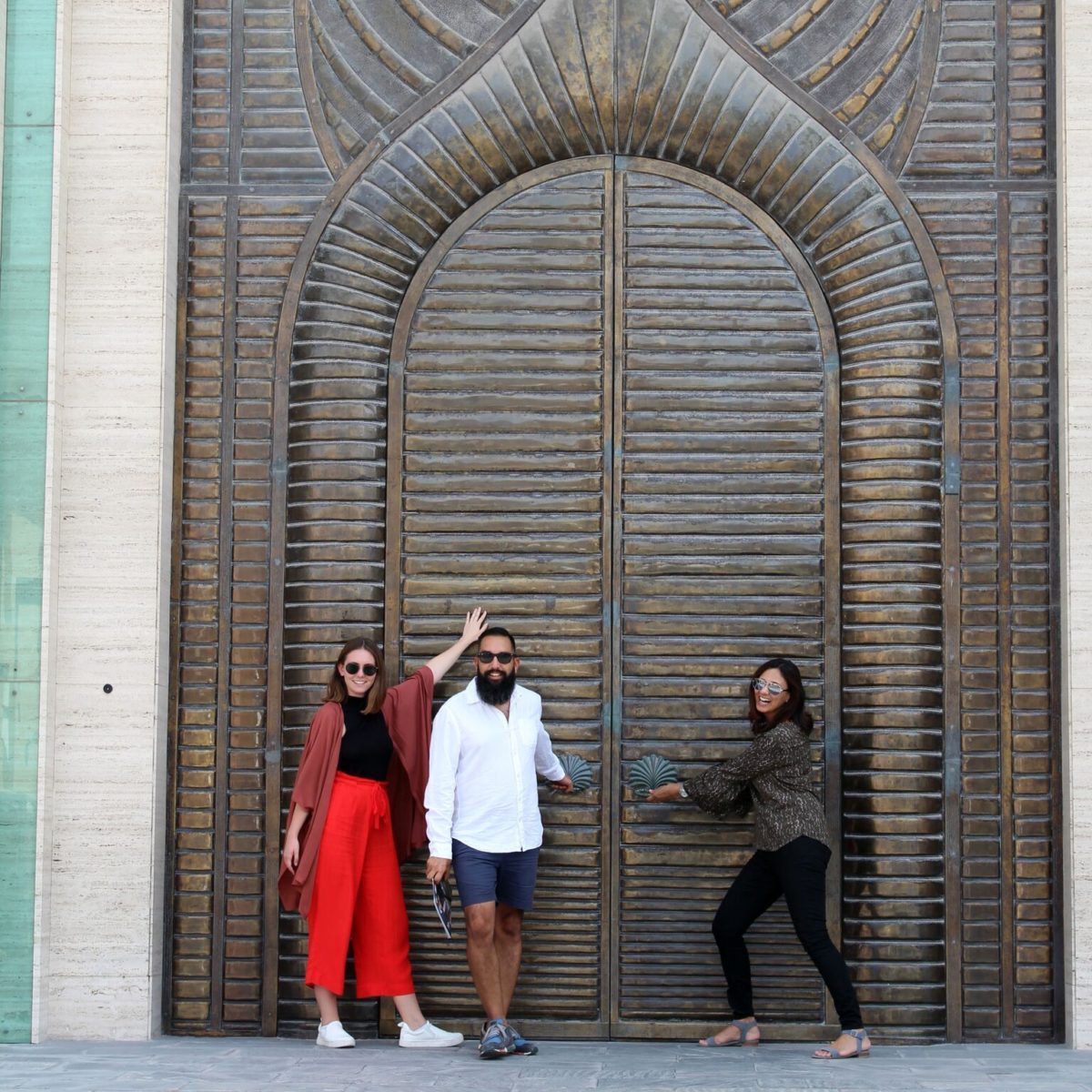 Emma with fellow travelers David Durán and Samina Sabir in front of an event space at Katara. Photo by James Murray.

Though first proposed by the Sheikh, the cultural village is in large part the realization of tireless work from the Qatar Tourism Authority. In a press release, they described their mission “to firmly establish Qatar on the global map as a place where the people of the world come together to experience unique offerings in culture, sports, business and family entertainment”—something that clearly aligns with Katara Cultural Village, whose own mission is to “serve as a guardian to the heritage and traditions of Qatar and endeavour to spread awareness about the importance of every culture and civilization.” The creation of Katara is a true accomplishment for Qatari leaders who have long shared a desire to position their country as a cultural hub of art, theater, literature, music, visual art, conventions and exhibitions in the Middle East. As the powers behind Katara continue on their quest to unite the world through art, it is clear that they’ve been able to unite the Middle East in a way that is not often seen.