After the death of her mother, Korean-American singer Michelle Zauner poured her grief into two full-length albums, Psychopomp and Soft Sounds From Another Planet, under the moniker Japanese Breakfast. Now, after considerable critical acclaim and two-and-a-half years of touring, Zauner talks about what she’s packing—plus emotional solitude, kimchi, and expanding her creative repertoire, all for Here Magazine issue 08.

Michelle Zauner was born in Seoul, South Korea, grew up in Eugene, Oregon, lives in Philadelphia, Pennsylvania, and is looking to maybe buy an apartment in Bushwick, a neighborhood in Brooklyn, New York. “Isn’t that scary?” she asks in regard to her potential real estate purchase, in the noncommittal fashion of a true Millennial. Long before she found success with her indie rock band, Japanese Breakfast, the 30-year-old actually lived in New York, but had to move somewhere more affordable—Philly—in order to pursue music full-time. Now that she can (kind of) afford it, she’s thinking about taking the leap. “All my friends live there,” she says. “Plus there’s way better Asian food in New York.” 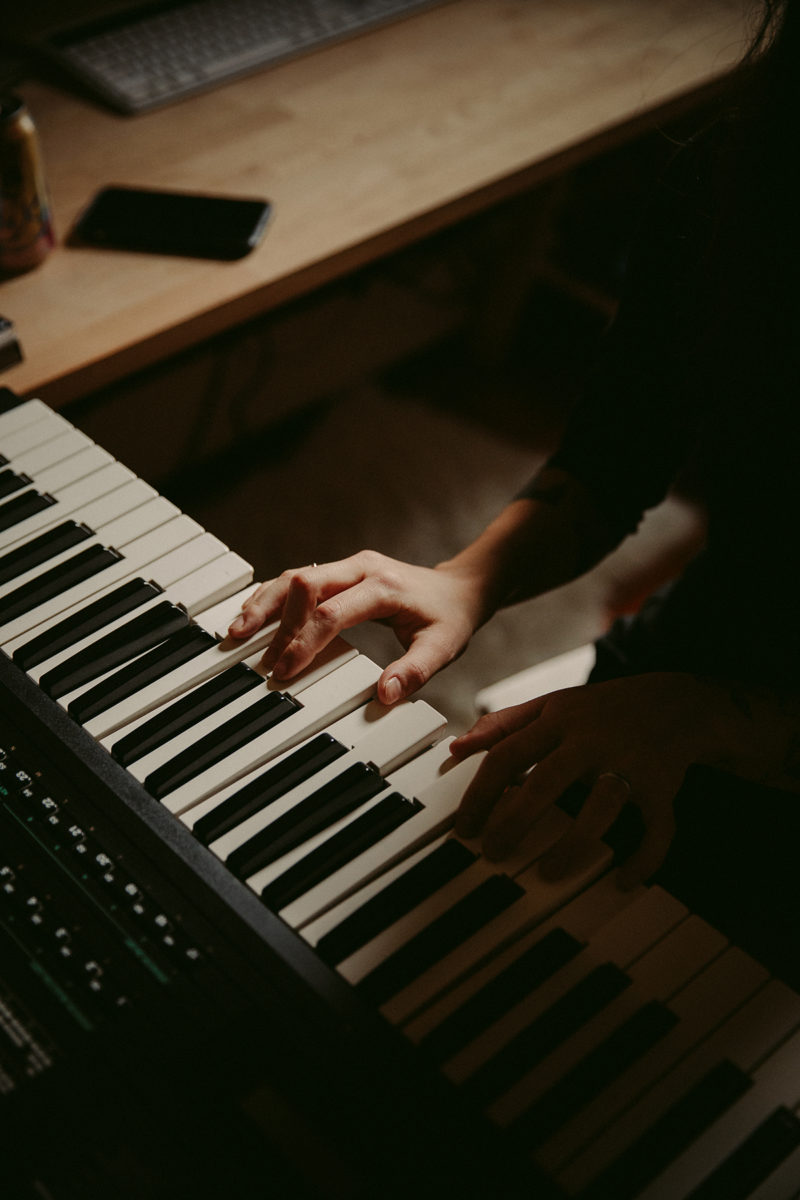 Musician Michelle Zauner plays the keys that she keeps in her bedroom as part of her at-home recording space. 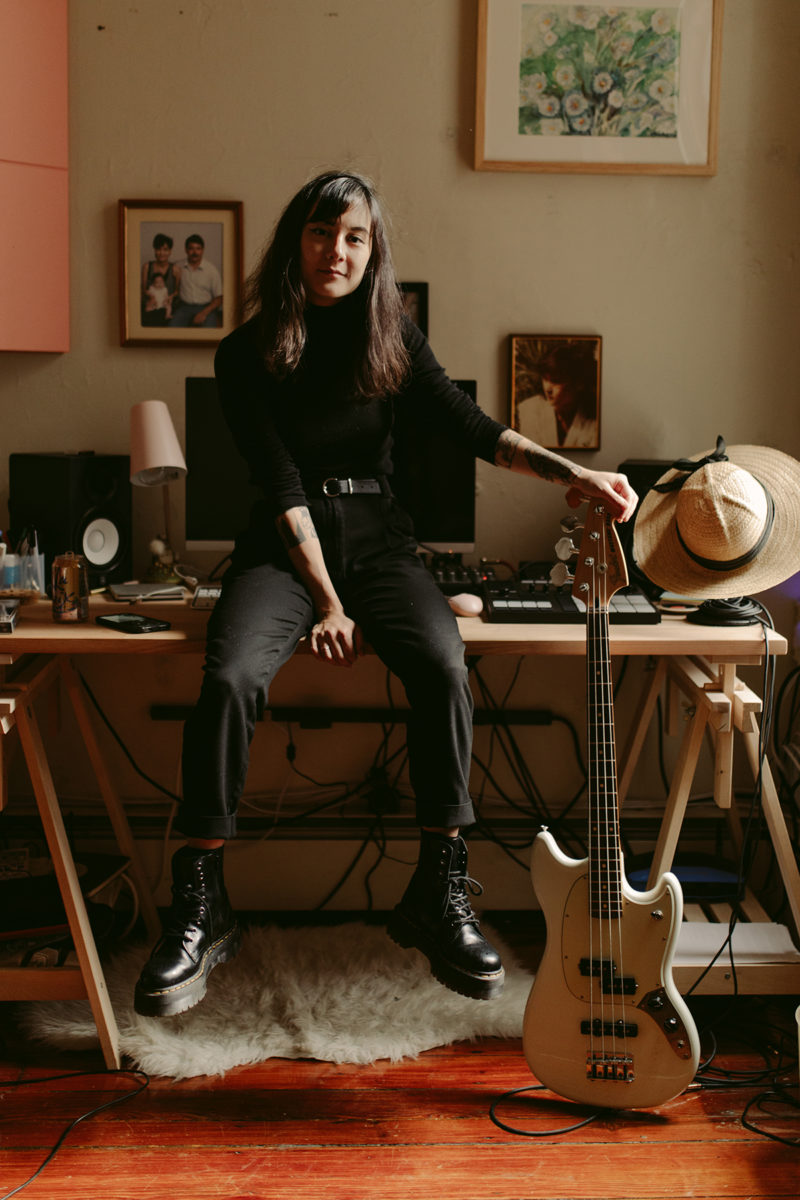 “It’s not as much fun if you don’t have someone to turn to and go OH MY GOD, they’re serving Veuve as just, like, house champagne!” says Zauner, of the rare business-class seat.

Zauner is sitting on top of her legs like a Betty Spaghetty doll, her feet behind her and her knees out to both sides, on one of two fuzzy, white rugs that I count in her South Philadelphia apartment. She apologizes for the overwhelming smell of kimchi—she made some soup this morning—and I tell her not to worry, that it smells amazing, which it does. The décor hits all the many notes of her aesthetic, at the juncture of quirky art director, youthful rock ’n’ roller, and doting grandmother. Guitars are mounted above her bed, old show posters framed on her walls, and a massive desk-slash-recording-studio occupies a third of the space in her bedroom; there’s a Leonard Cohen New Skin for the Old Ceremony record cover pinned up in the living room and a copy of Joan Didion’s The White Album on her bedside table. (She prefers Slouching Towards Bethlehem but she’s been reading this one on and off.) The kitchen is small but teeming with well-organized shelves that house pots and pans and a giant tin full of soy sauce that looks more like a WWII relic than a functioning culinary vessel.

She notices my eyes flitting back to the mess of wires and hardware on the desk behind her and explains to me that her husband and bandmate Peter Bradley has been building and rebuilding an electronic music board game for the last three years. 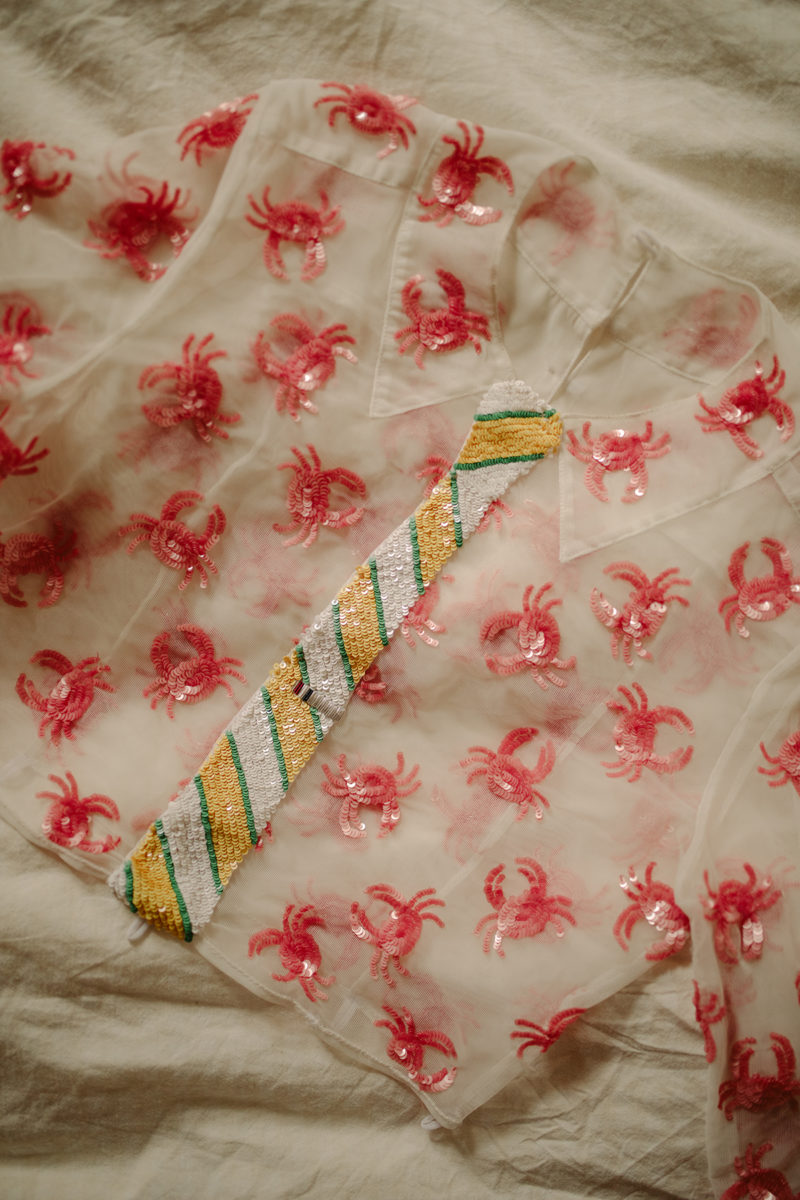 This custom Thom Browne top was created for a show in Baltimore. 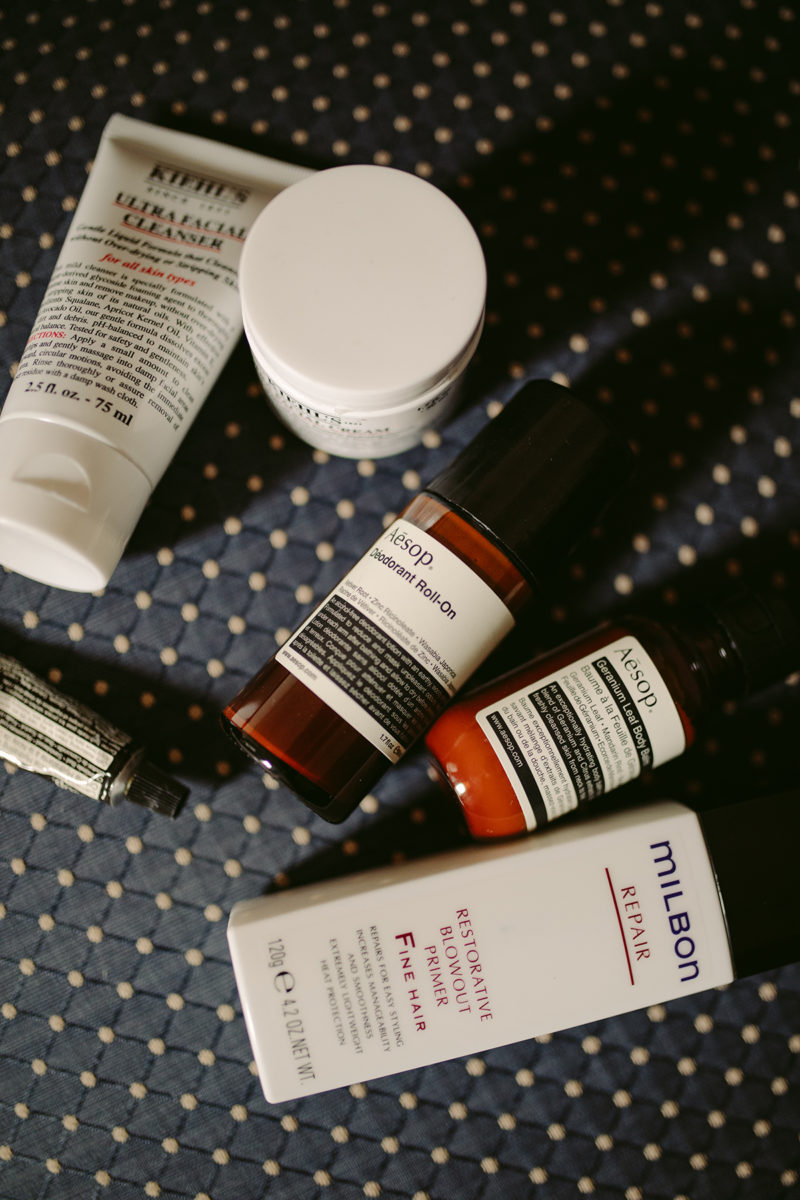 “I’m pretty lazy and just brush and air-dry my hair, but I’ve started adding a little bit to the ends to take better care of my hair in the winter,” Zauner says of the Milbon Repair Restorative Blowout Primer (Fine Hair) recommended by her hairdresser. 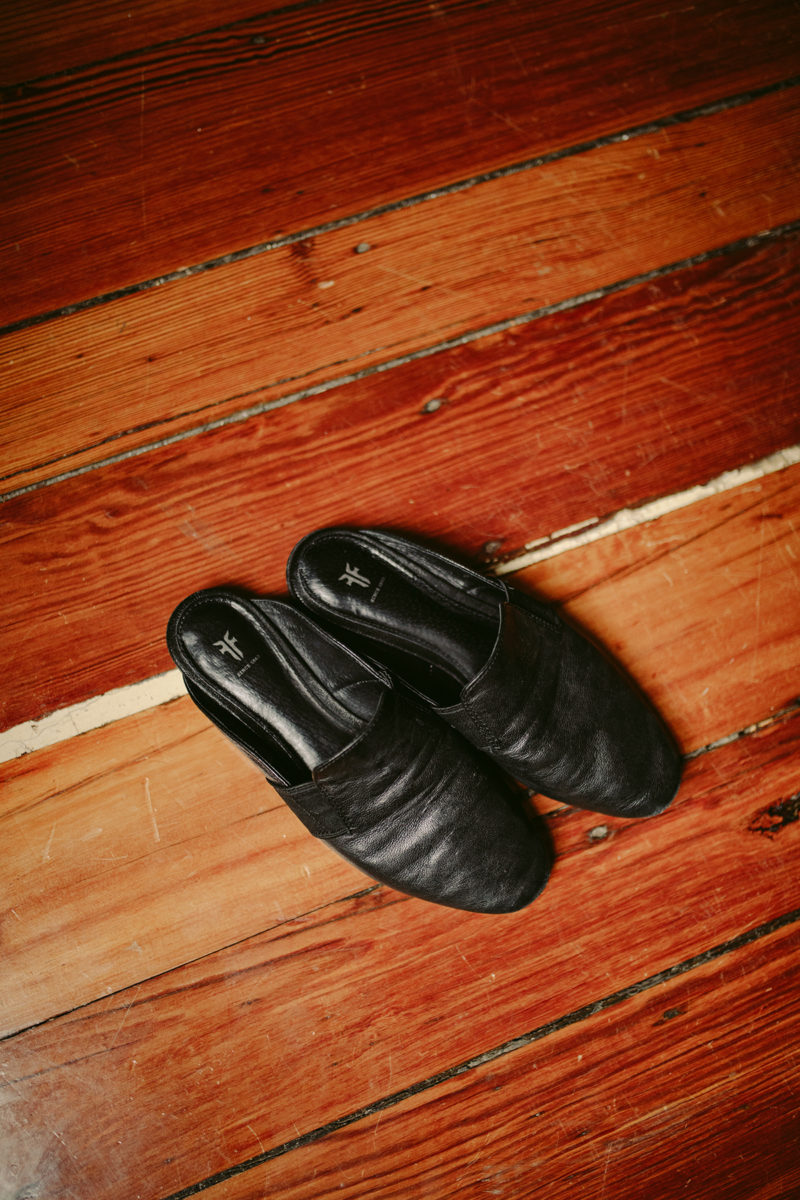 Zauner’s Frye slides have stood the test of time. “I want more things like that… that last a long time, that look nice and have value. I don’t want to just buy what’s cheap and immediate.”

As we talk about her life and creative pursuits, it’s clear that she, like her husband, is a kind of tinkerer. She reminds me of those kids who dis- and reassemble computers in their spare time, with hands that can’t quite keep up with the lightning speed of their minds. Except, instead of building a machine, she’s building an artistic identity: If she’s not working on Japanese Breakfast, she’s scoring video games like Sable or directing music videos, including her own for “Boyish,” off the band’s second album, Soft Sounds From Another Planet, and Jay Som’s “The Bus Song.” She’s on her way to New York after our shoot to pitch her memoir, an extension of a New Yorker essay she penned titled “Crying in H Mart,” to literary agents. She cooks. And after two consecutive records that deal with the trauma of losing her mother to cancer as a young adult, Zauner is feeling the creative itch to write about something else, to explore other emotions in her music and in herself. Even psychologically, she prods and digs, approaching her own grief and struggle with the curiosity and interest of a great scientist.

But for Zauner, this compulsive need to keep dissecting is often a reflection of deeper anxiety, a fear of stillness. She seems always to remain in motion—the band has been touring two full-length albums (Psychopomp and Soft Sounds) for a whopping two-and-a-half years; she spent the holidays in Mauritius with her dad, who now lives in Thailand; and she’ll be attending the Game Developers Conference in San Francisco in a couple of months. This last one is a solo trip, which she finds unnerving. “The idea of traveling alone is so uninteresting to me,” she says. “I love traveling, but I gotta have a bud. I am honestly so afraid of emotional solitude. Especially after my mom passed away, having time alone is very scary to me.”

For now, though, she’s packing for a quick work trip to New York to try to get that memoir off the ground. As she carefully layers her items in her suitcase, we talk about all the things and people in her life—her art, her cooking, the things she surrounds herself with—that make her feel less alone. 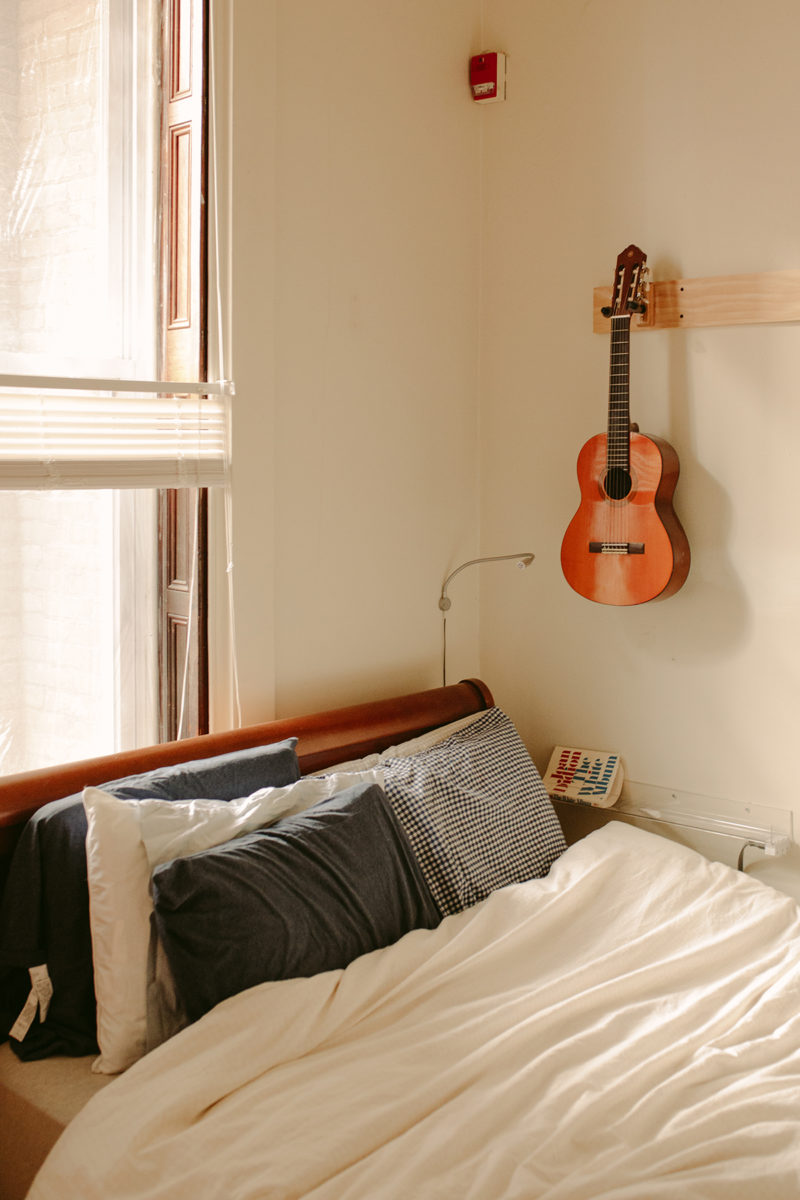 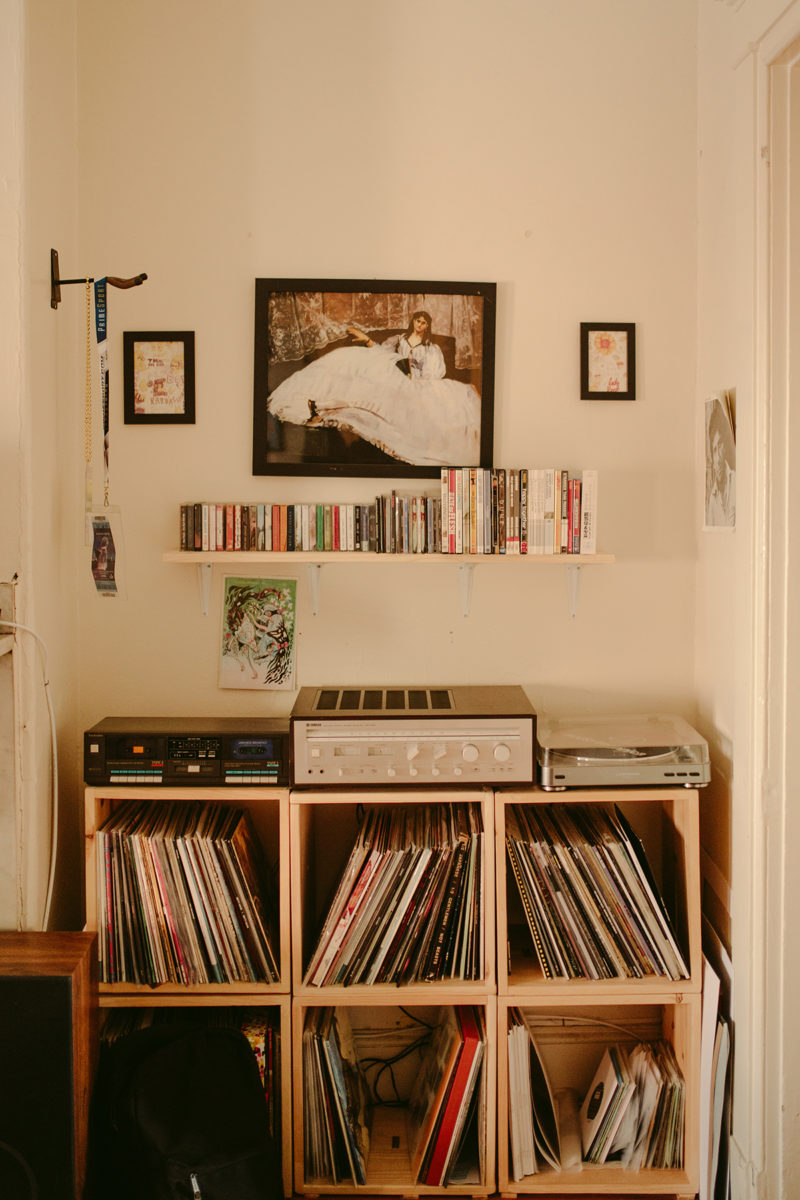 “One thing I really love about being a musician is that I can curate so many talents to work alongside me,” Zauner says. “We’ve had so many great artists make us posters and art, and I’ve tried to be really good about framing them because I don’t want them to die.” In this corner of her living room she houses various artworks, old show badges, a portion of her record collection, and many different kinds of speakers. 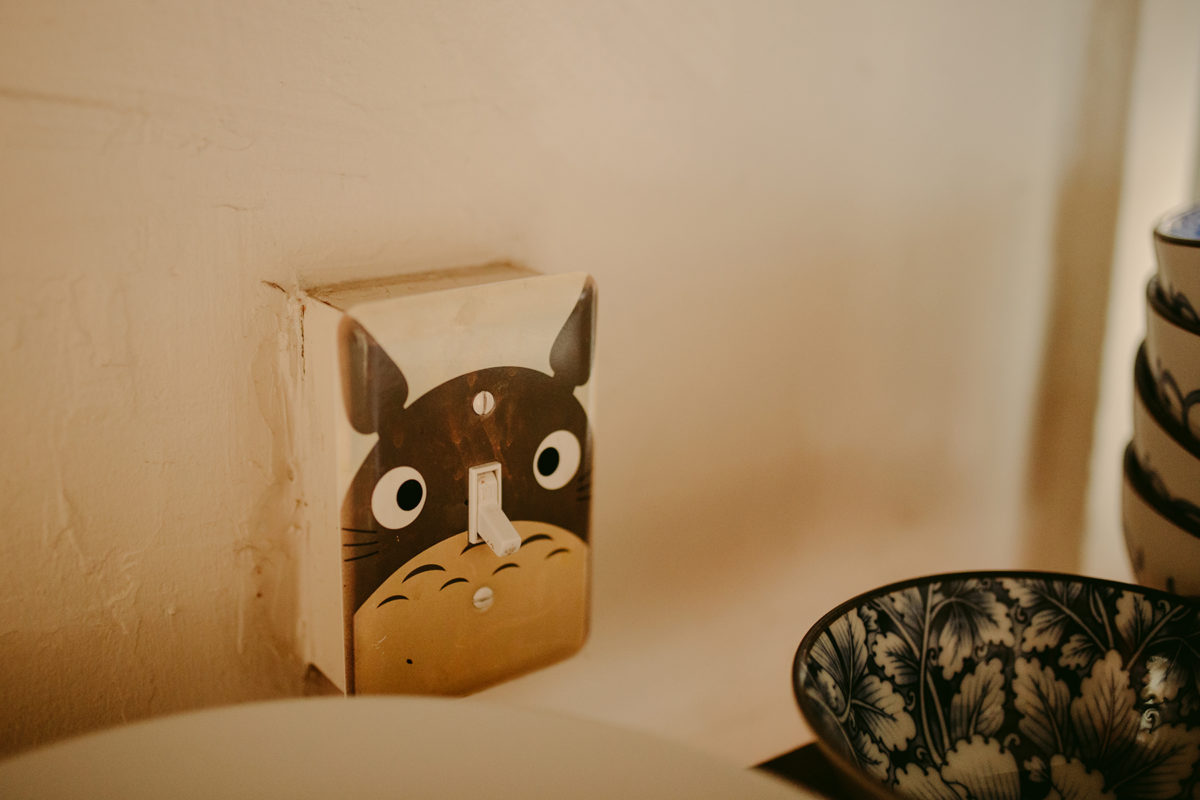 No, no. I was born in another country, so I grew up traveling; I used to go to Korea every summer. I’ve had a passport since I was, like, nine months old. I’m very used to not speaking the language and to feeling like I’m in a foreign place; I don’t get nervous about that stuff. I’m only a nervous traveler in the sense that I like to go to the airport early. I have the dad gene where I like to have a solid two hours at the airport just in case something happens. I have TSA Precheck, and I have Global Entry and stuff, but I get very nervous on my way to the airport, like, what if the check-in line is long? What if there’s traffic?!

Ah yes, the panicked cab ride. Do you still go back to Korea a lot? Or Oregon?

We were on tour in Korea in 2017, and afterwards Peter and I stayed for like five weeks. We’re going back in May, around the time of a festival we have booked in Manila, and we’ll probably stay there for as long as we can before we have to come back. That’s the great thing about our jobs; we can just go. And we go on tour to Oregon quite frequently, but my dad’s not there anymore and my friends have moved out of Eugene, so I don’t have a huge reason to stay there. I miss it, though. It still feels like home to me in so many ways. I always find myself wanting to go back in the summer. All of my precious childhood memories are of being there in the summer, swimming in freshwater and being with my friends. I love the Pacific Northwest; my spirit is so Pacific Northwest. 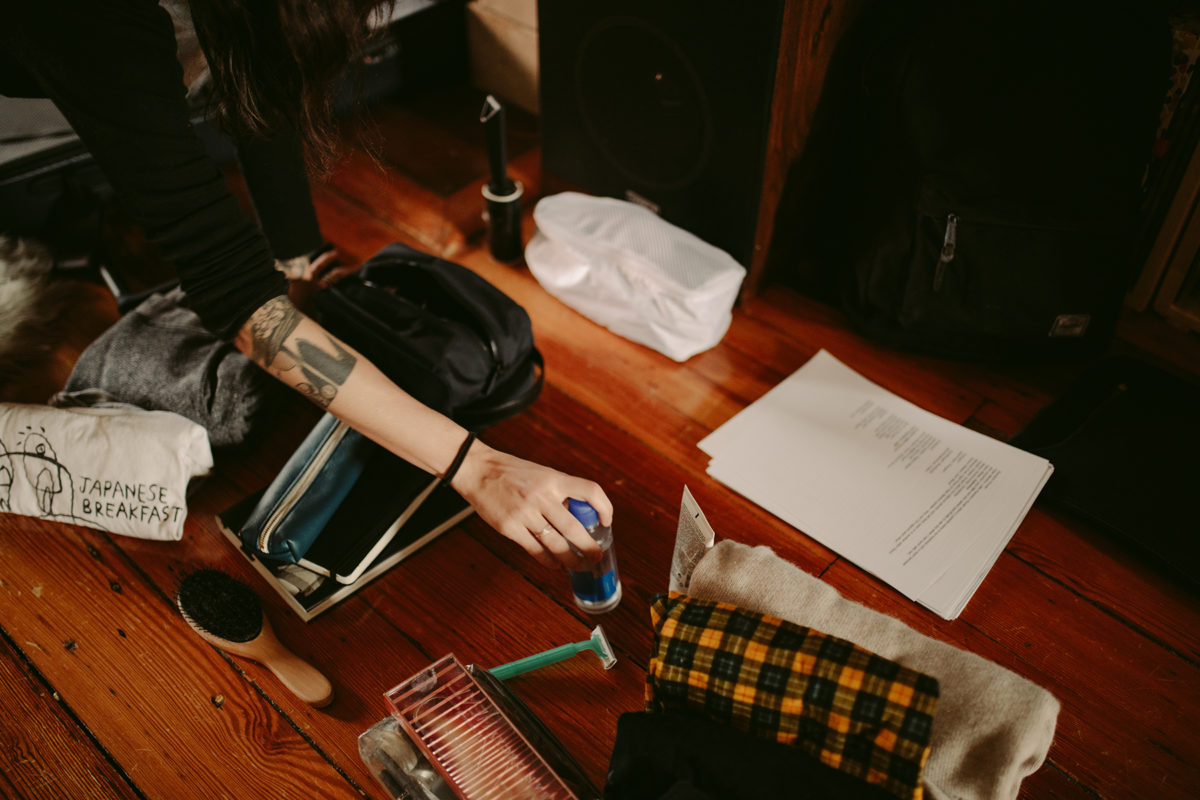 Zauner’s arms are decorated with a good deal of ink. Among the many anime references, the Leonard Cohen quote, and two $33 Friday the 13th tattoos, she has one of the “Kewpie mayo guy.” “My mom used to make this thing for New Year’s that was like scallop sashimi with Kewpie mayo and fish roe, and we ate it with seaweed. It was so good.”

How has your packing philosophy changed over the years?

When you’re young, all you want to do is buy the cheapest thing, but I’m at the point in my life where I don’t want to buy the cheapest thing anymore. I want something that will last and something I will use all the time. I want to invest in things that allow me to feel good when I go to the airport, like a nice sweater and a nice suitcase, instead of just, like, piling up a bunch of shitty H&M shirts. And now, every time I go to New York, I have to be prepared for meetings and stuff like that, and I’m like, Oh, I need to wear nice things! Will people notice that part of my pant is broken or my belt is too long? But ultimately, I try not to bring too many things just because I don’t want to lose them. So much stuff gets lost on tour. I try not to pack too much ever.

You mentioned that your book is going to focus on your relationship to food. Why is food so important to you?

When I come back from tour, I go to H Mart right away and buy groceries, because on tour you hardly get to cook. And I got really into making kimchi in 2015 when I moved to New York because I just couldn’t find this kimchi that I liked. [Cooking] really reminds me of my mom; so much of the way she expressed her love for me was through cooking and so much of how I understood my cultural heritage was through food, so I think it became a really natural thing for me to gravitate to after she passed away. It’s a very tactile, intuitive thing to do. I’m a very nervous person, always trying to do too many things at once, always thinking, like, five steps ahead of everything. But cooking is kind of all-consuming in a way. You’re thinking five steps ahead, but you’re not thinking about tomorrow, you’re not thinking about all the things you have to do next week. You’re thinking, like, Okay, when I take out the noodles I have to rinse them and then I have to turn down the heat here… It just feels like that nervous energy is being put to use. 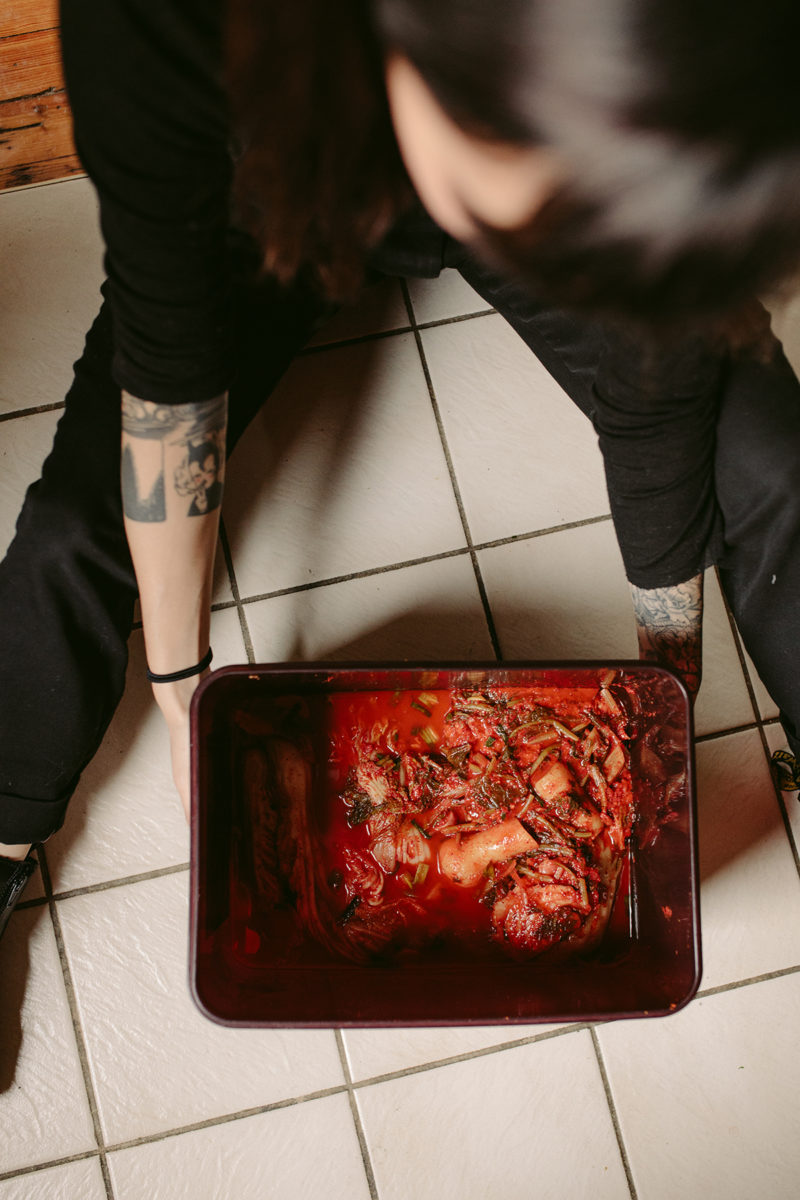 Loneliness seems like a big theme in your life and work, both in travel and in the loss of your mom. How do you turn that into inspiration?

Yeah, definitely. I mean, that’s kind of what draws me to making art in general. You’re constantly reaching for understanding and reassurance that you’re not alone in these experiences. Everything I’ve ever written about were things that I felt were very isolating and very unique to me. And after putting them out in the world, you realize that it’s not unique at all. Everyone goes through death and everyone goes through grief. A lot of people manage it and find therapy through different things, like in cooking and connecting to their culture—all these things that felt so painfully specific to me. That was so comforting to me, that these things that I thought only I went through are things that so much of the world can relate to.