Twenty-six-year-old musician Jackie Mendoza’s life is a balance of distraction and discipline, hedonism and restraint. The green glitter on her lids refracts in the same sunlight that drenches the (mostly) bare walls of her bedroom. She works part-time at a vet clinic near her Bed-Stuy, Brooklyn, apartment, but will take off work when a gig arises.

The best way I can describe Mendoza’s style is “psych-clown-minimalist”—three words I never thought I’d put together. She has an element of carnie, a touch of punk; and yet, it’s her subtlety that speaks the loudest. This seeming improbability fits Mendoza, whose very nature bends, even transcends, genre and label. She grew up on the Mexican border, in both Tijuana and Chula Vista, California. She’s queer. Her electronic indie sound has evolved from teenage years spent doing musical theater and posting ukulele covers to YouTube.

In April, Mendoza released a new EP, LuvHz, produced by Rusty Santos. The six songs seamlessly flow between Spanish and English, between 90s alt-rock and futuristic techno. Before she ventured on tour, we caught up with her at home to learn about Brooklyn’s indie music scene, bilingual songwriting, and how she packs for work and play. 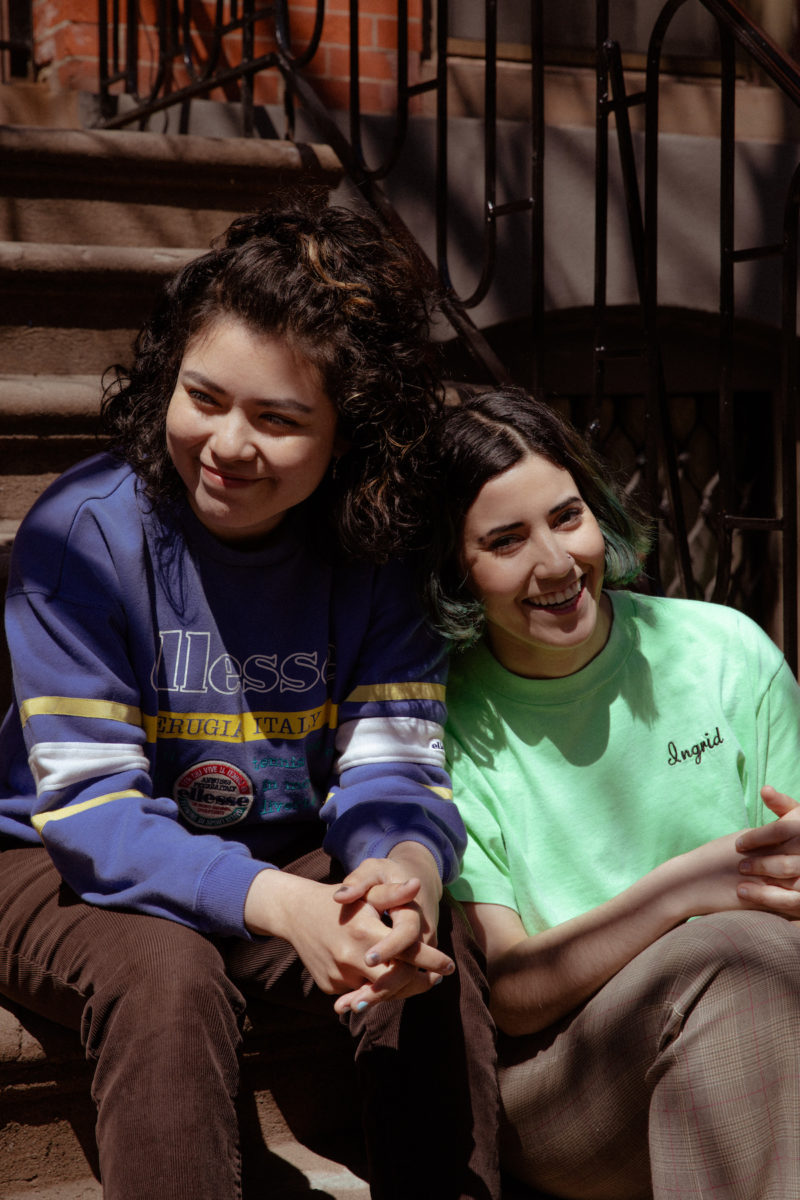 Mendoza (right) with fellow musician and long-term girlfriend, Lucia Arias (left)—as roommates, they hold one another accountable as artistic creators and as doers of the dishes. 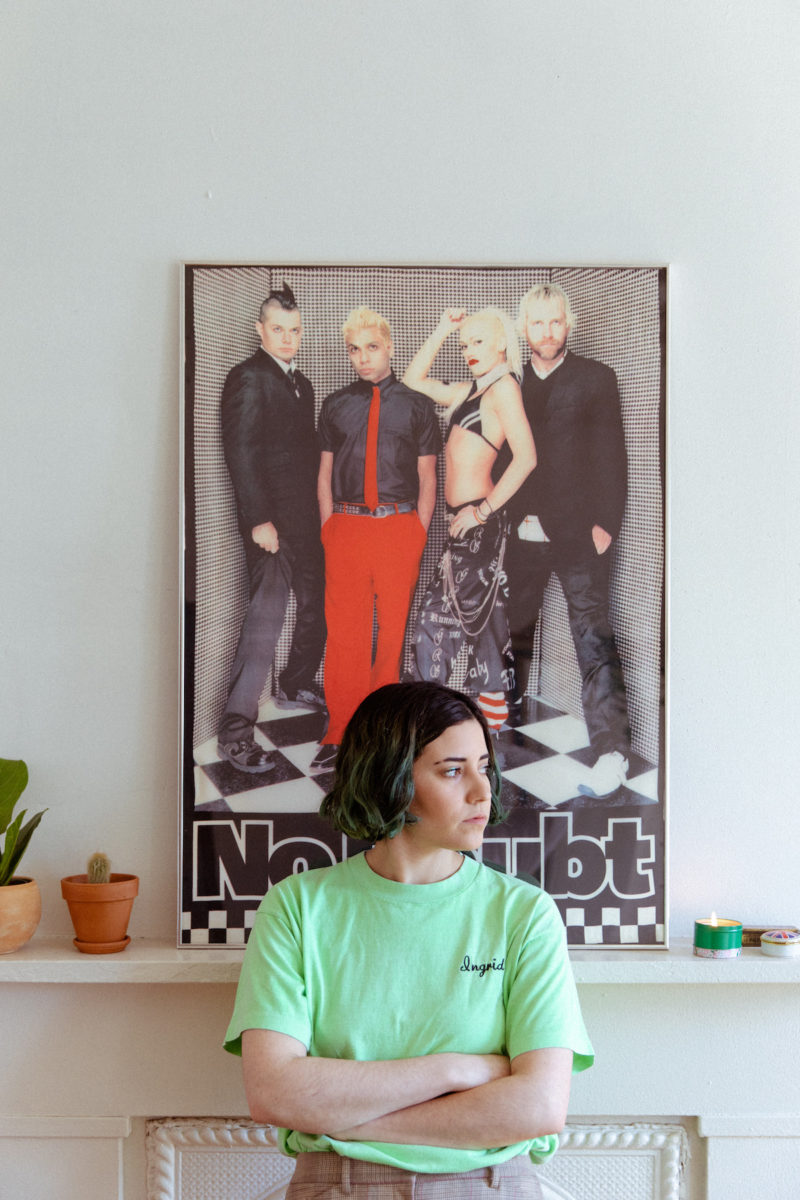 On the wall hangs a framed No Doubt poster; on the floor lies a bright green rug and a neon orange chair that Arias found on the sidewalk. “I love neon,” she tells me. “Ever since I was in middle school and I had MySpace, I’ve never stopped loving neon.”

I came [to New York] for school. I went to Marymount in 2012 for Communications and Business, and I had no plans of doing any sort of music-related things. My plan was to go to school, get my degree, and become a crazy business woman. But then my sophomore year I took a music production class where I learned how to make electronic music and I started blending songs I would write on the ukulele with things I was learning in the class. When I started doing music here, I always felt a little bit like an outsider, like I didn’t belong or I wasn’t cool enough. Since the beginning I felt like I didn’t really fit into a specific genre or a specific scene, but now I don’t really care about that as much. 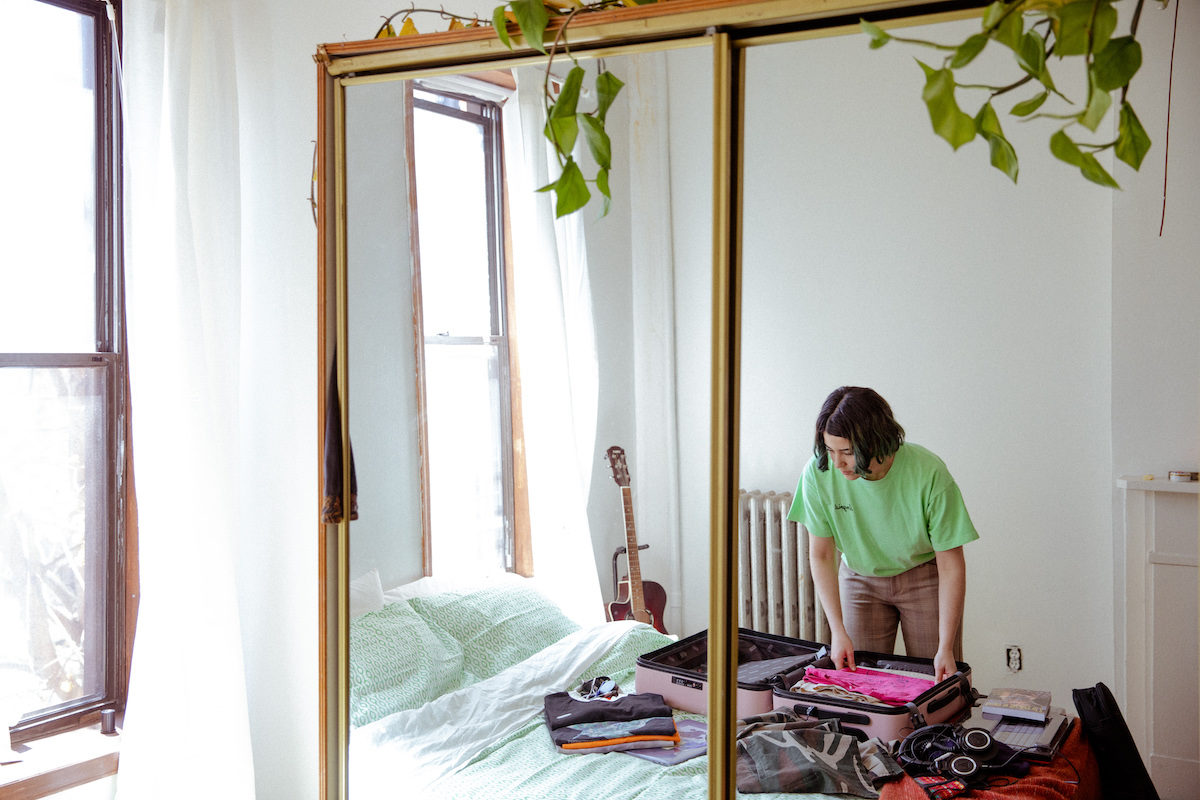 The green pigment in Mendoza's hair and the neon platform loafers that she packs in her suitcase are foils to her warm but reserved personality. 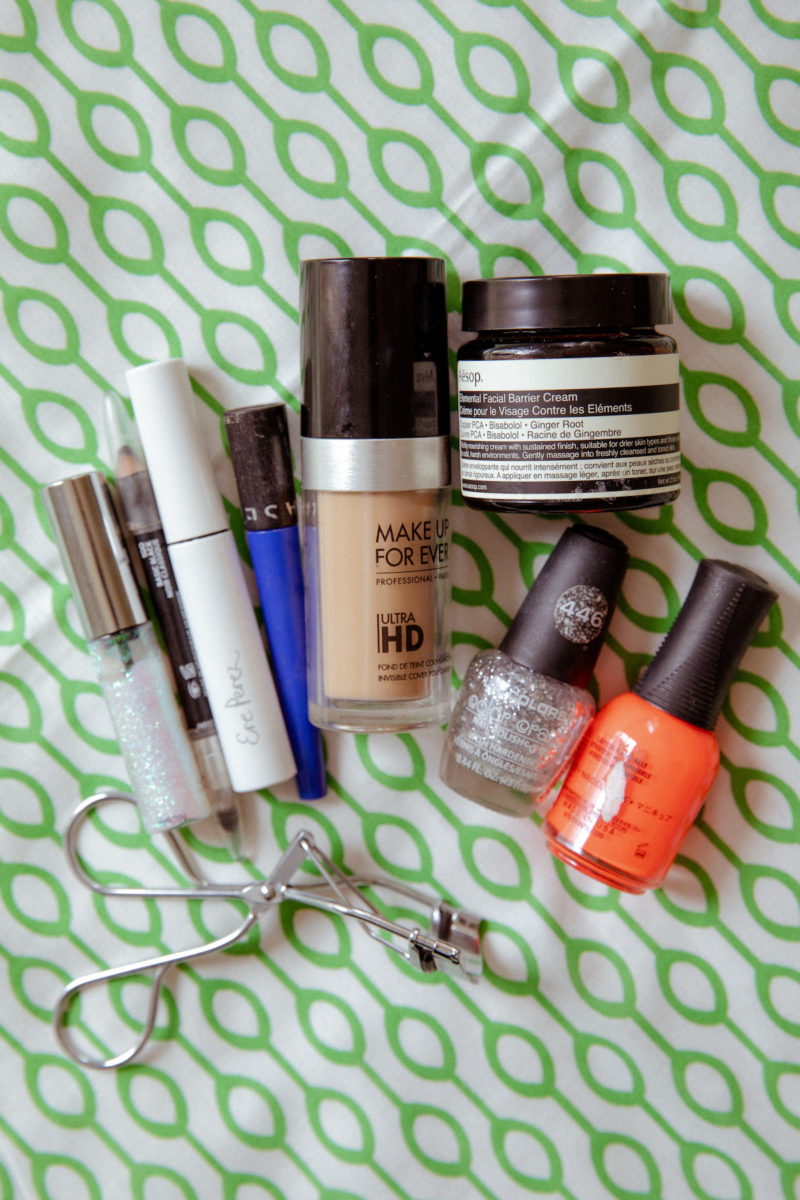 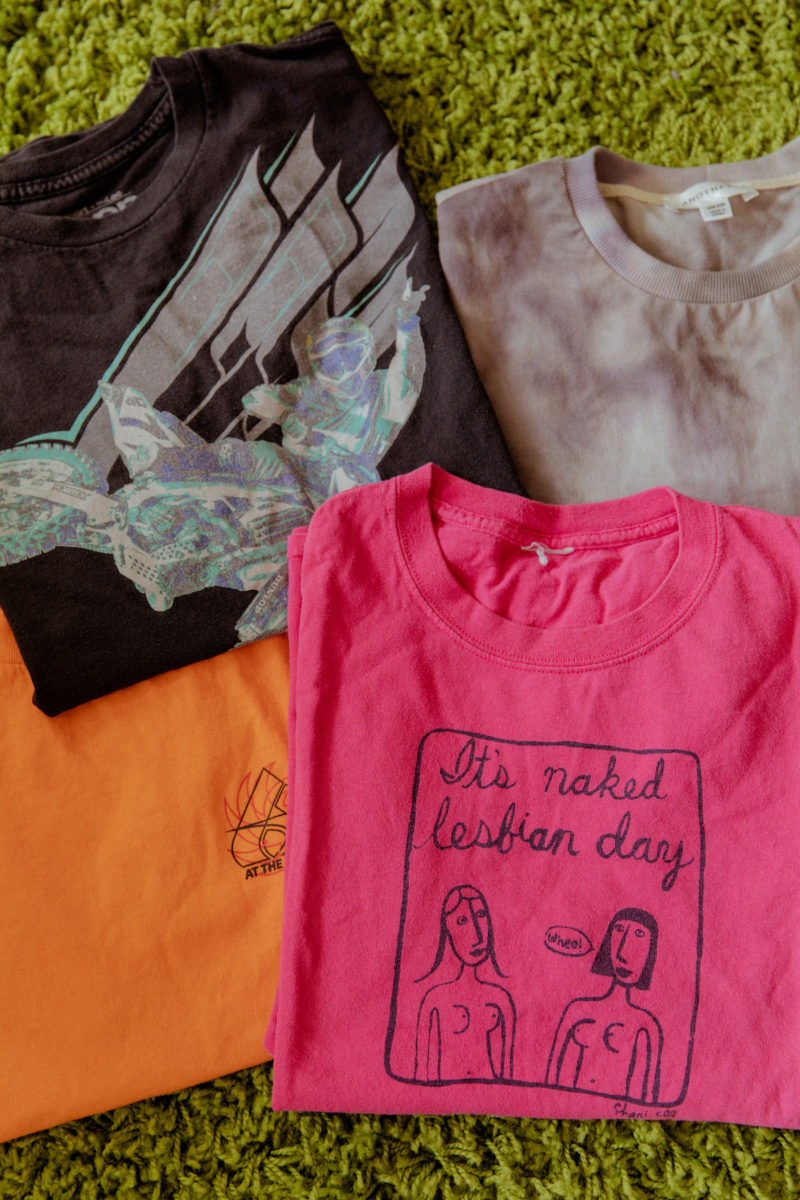 There’s not as much music in San Diego as there is here. There are more bands here. In San Diego there’s a lot of people from T.J. making things happen, like throwing festivals, booking shows in random places like bookstores or galleries. And art is very blended with music there, more than here. Every show, they’ll also have an art exhibit on a wall. One time I played at a clothing store, and it was a show, but also they were showing local designers’ clothes. Or another time I played at this DIY venue and it was an art show but also a [music] show. They try to blend as many things as possible together. In T.J., there’s this project called Digigurl, they’re really good. I don’t know their pronouns but they make electronic music. It’s like 80s vibe. They also sing in Spanish and English.

At first I only started singing in Spanish because my grandparents kept telling me to. At every family gathering they’d be like, “Sing for us!” And then I would play something and they’d be like, “Why aren’t you singing in Spanish? You’re Mexican.” So that pushed me to start writing in Spanish. And after a while I became more comfortable doing that. Even now, it’s kind of hard switching back to English. After a while it felt more natural to sing in Spanish than in English. Down the line, I’d like to put out a fully Spanish project. Right now I feel my like natural language is Spanglish. I feel like it’s part of my identity. 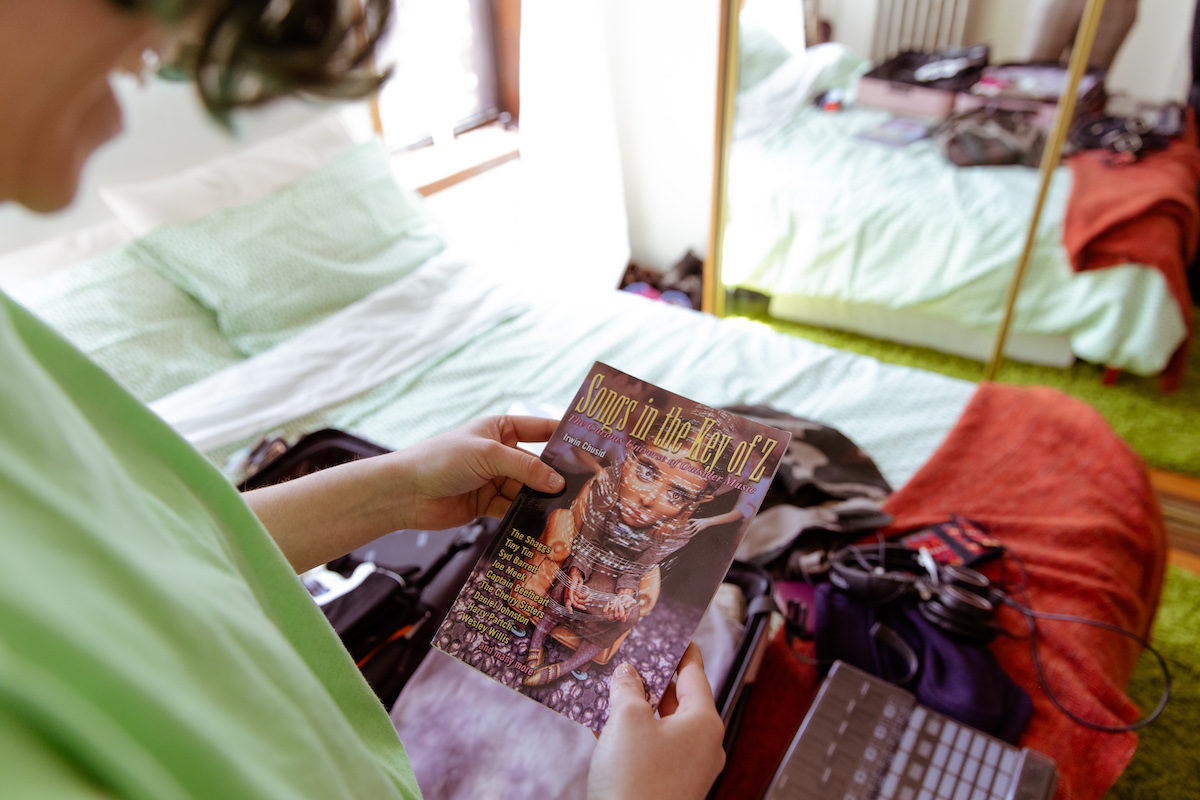 "I'm just doing what comes natural to me, what I love," says Mendoza. "I don’t care about what people think or how I'll fit into a certain situation as much as I did when I first started making music. Now, I feel more comfortable with myself." 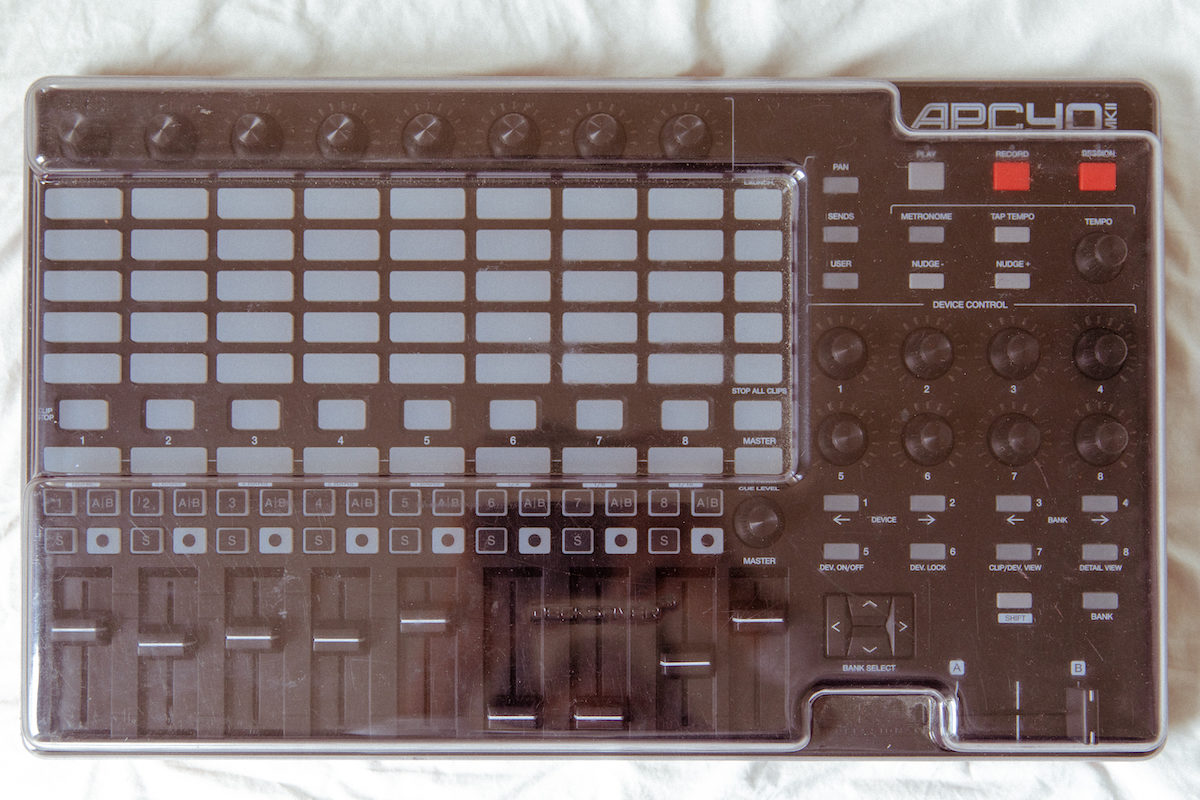 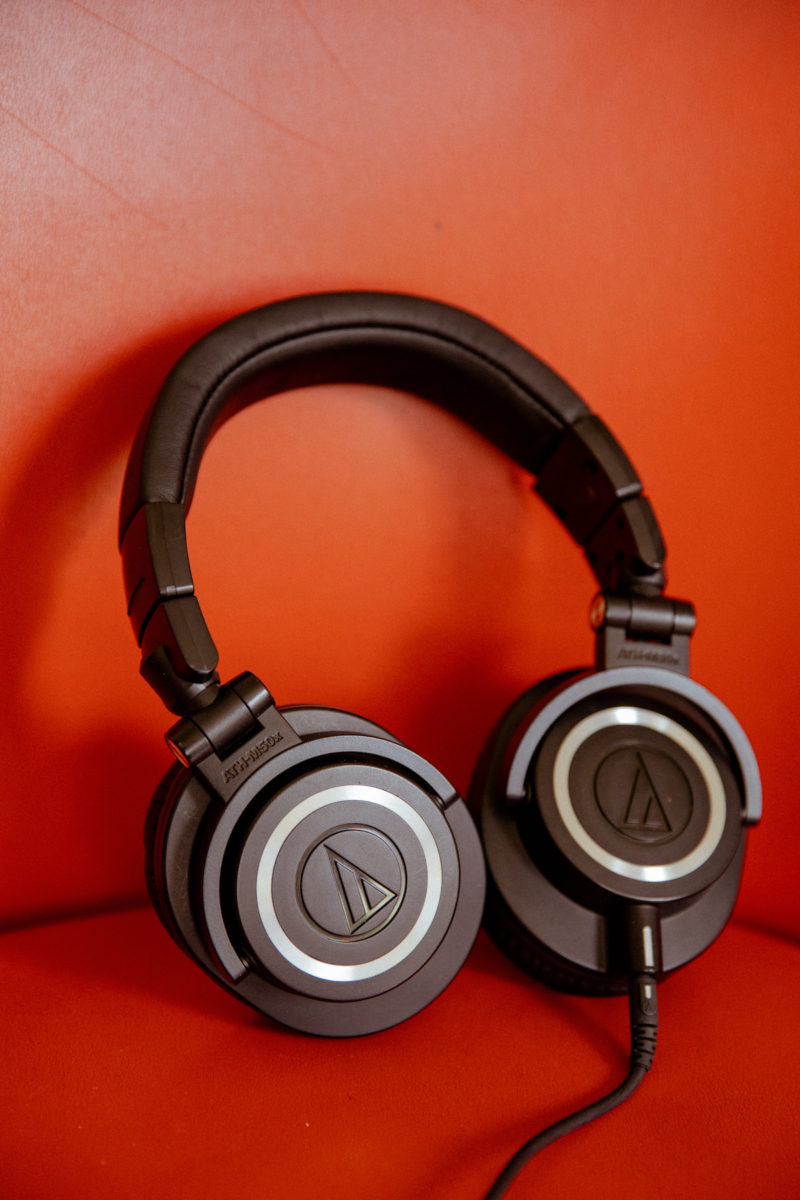 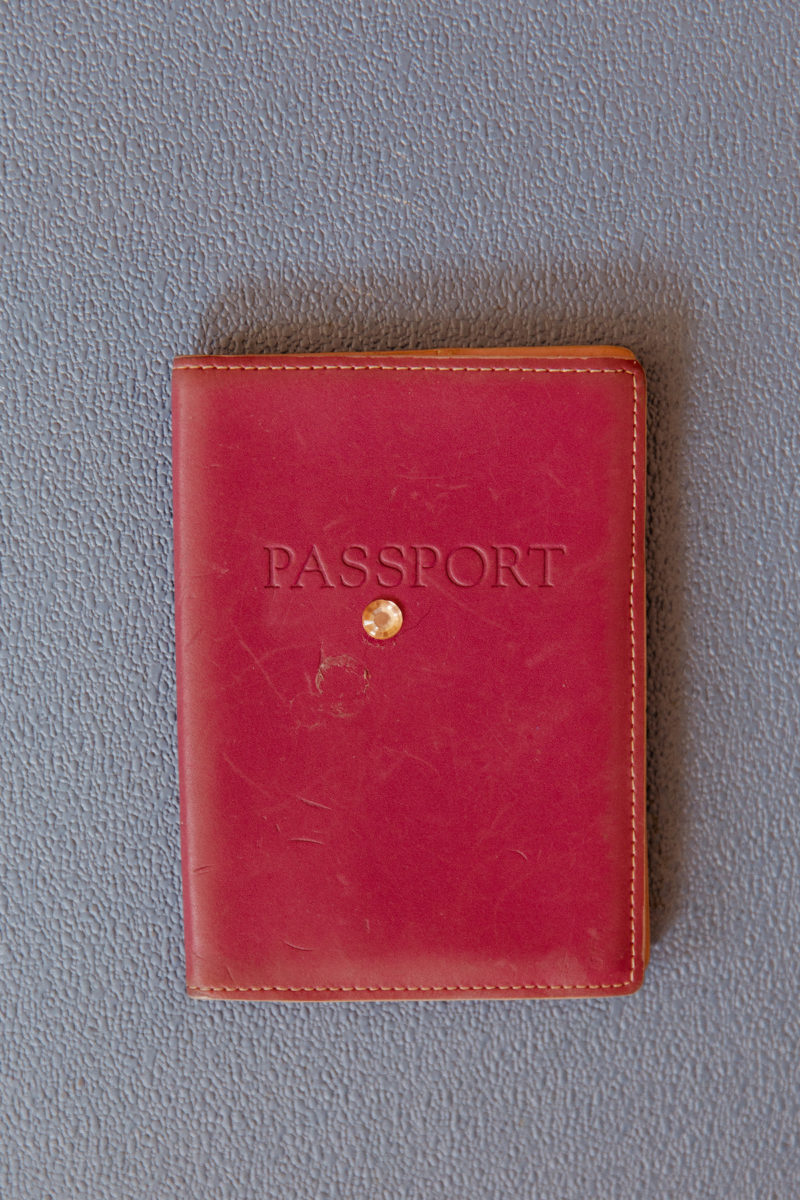 I bring this book called Songs in the Key of Z about “outsider musicians” with me that Lucia gave me. It features The Shags, Tiny Tim, Daniel Johnston; it’s people who weren’t trained musically and their music is kind of off, but in their heads, they’re the best musicians that ever lived and they just make really unconventional music. Most people, when you listen to it, think it’s horrible. But that’s what’s great about it. It’s not trying to be anything. I also always bring a lot of vintage and thrifted T-shirts and pants. I blend neutral pants with colorful shirts for packing, also neutral shoes that match with everything. My style is comfortable, random, and bright.

I would love to tour in Asia. It’s so foreign to me. I love it there and it would be so fun to play and to meet people. I went to Japan in 2016 and Thailand in 2017, both with my sister. We used to travel together before she got married in November. But my goal with the EP is just to tour. Just for people to listen to it.