The Jackalope Hotel Brings the Australian Countryside to the Future

The Jackalope Hotel sits on what was once just Willow Creek Vineyard, an hour outside of Melbourne.
SnapshotEmma Glassman-Hughes

At this hotel, winery, and restaurant just outside of Melbourne, find bliss in vino you can only get in the Australian countryside.

But I’m making it sound much more desolate than it actually is. Tell any Melburnian that you’re heading to Mornington and they’ll instantly perk up. “Oh, the peninshula? Beautiful.” Only an hour’s drive from Melbourne, the peninsula (pronunciation up to interpretation) is a much-needed breath of fresh, albeit salty, air. Melbourne, which I came to adore, is hardly a chaotic megacity; but after any amount of time spent in traffic and smog, a little escape to the country has easy appeal.

Though when I say “country” in this context, I don’t mean square dancing and cornfields. Kangaroos and echidnas graze in the bushes along the walking trail to Bushrangers Bay, where ruthless seas toss about on the rocks and sand. Tall eucalyptus trees provide excellent camouflage for sleeping koalas. There are certainly farms and cows, but Mornington isn’t podunk. It’s serene.

Which actually may be too mild a word to describe the setting at the Jackalope, a hotel that was opened in 2017 on the property of the Willow Creek Vineyard off of Balnarring Road. An evening passed in their infinity pool overlooking 11 hectares of vines with a backsplash of citrusy sunset and a glass of champagne in hand is one step further on the scale of delights. It’s sublime. 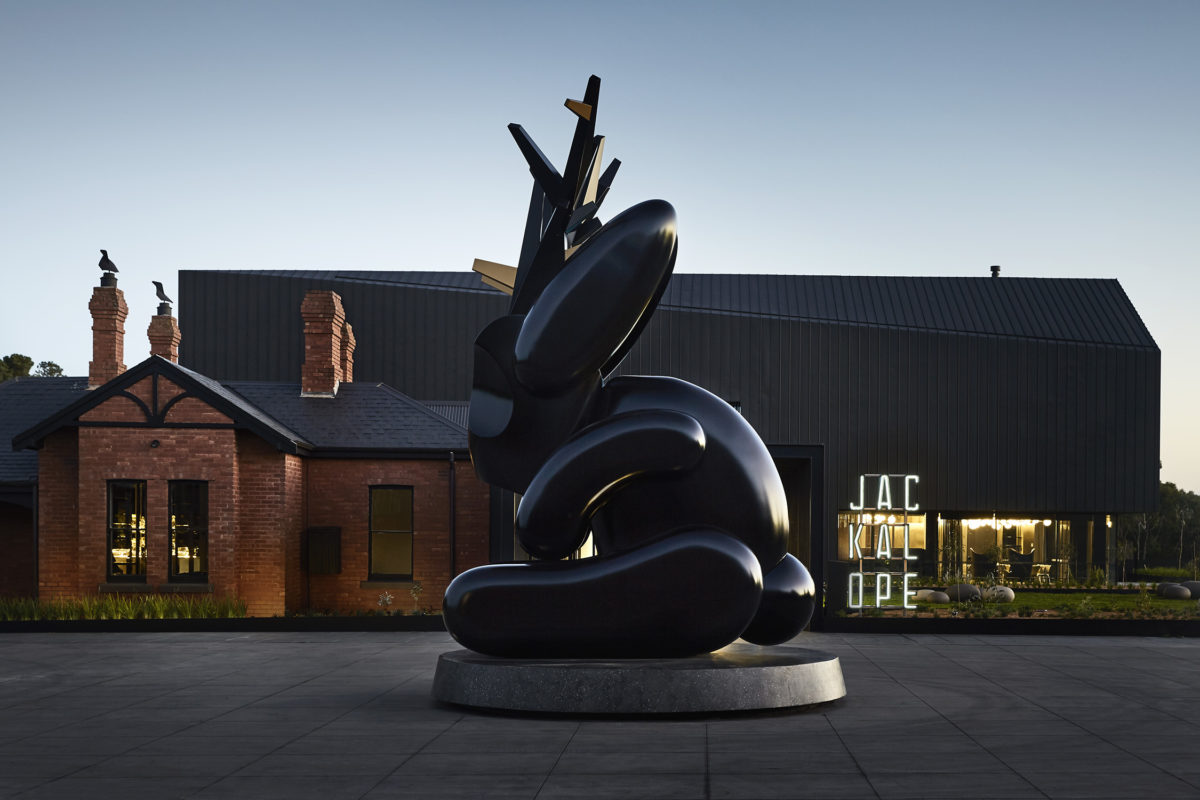 Appropriately, a jackalope sculpture sits outside the hotel's entrance. 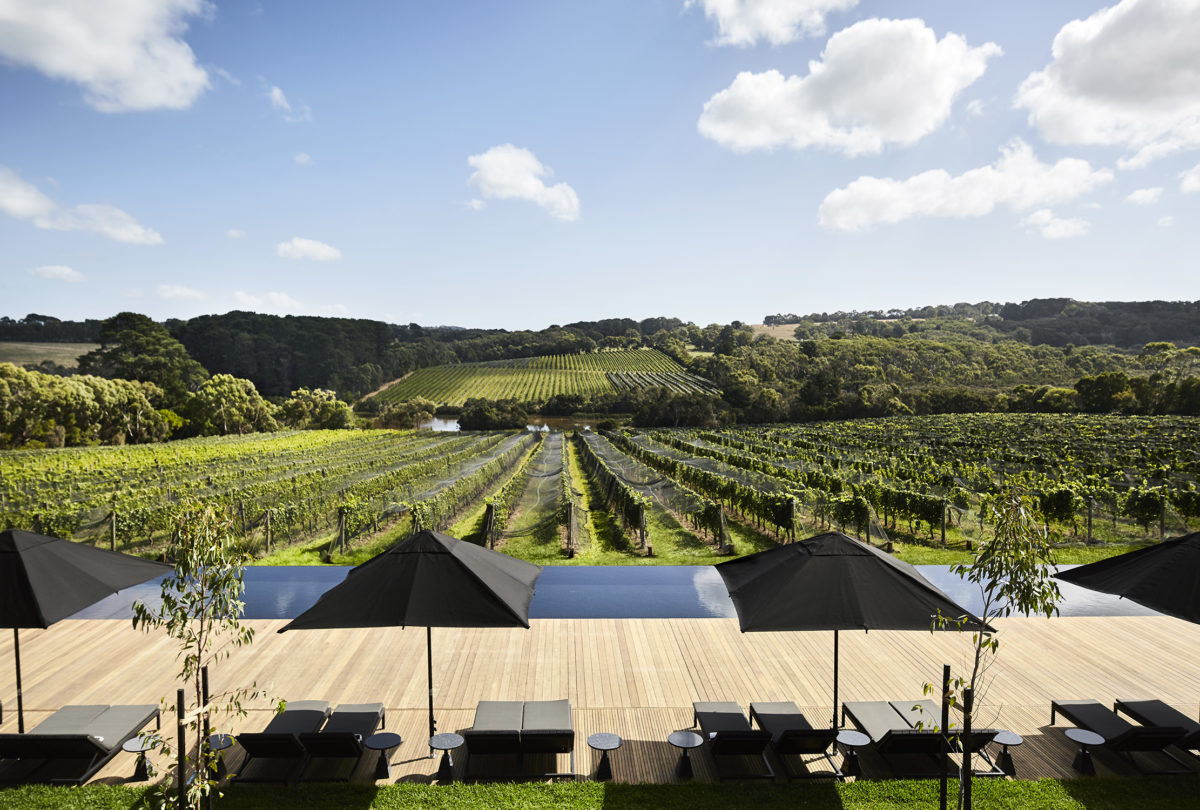 “I mean, it’s not exclusive to the wine industry obviously, but there’s always been so many [...women graduates who've studied
winemaking who end up] going into more sales and marketing types of roles and going out of production," says Geraldine McFaul, the Jackalope's head winemaker. 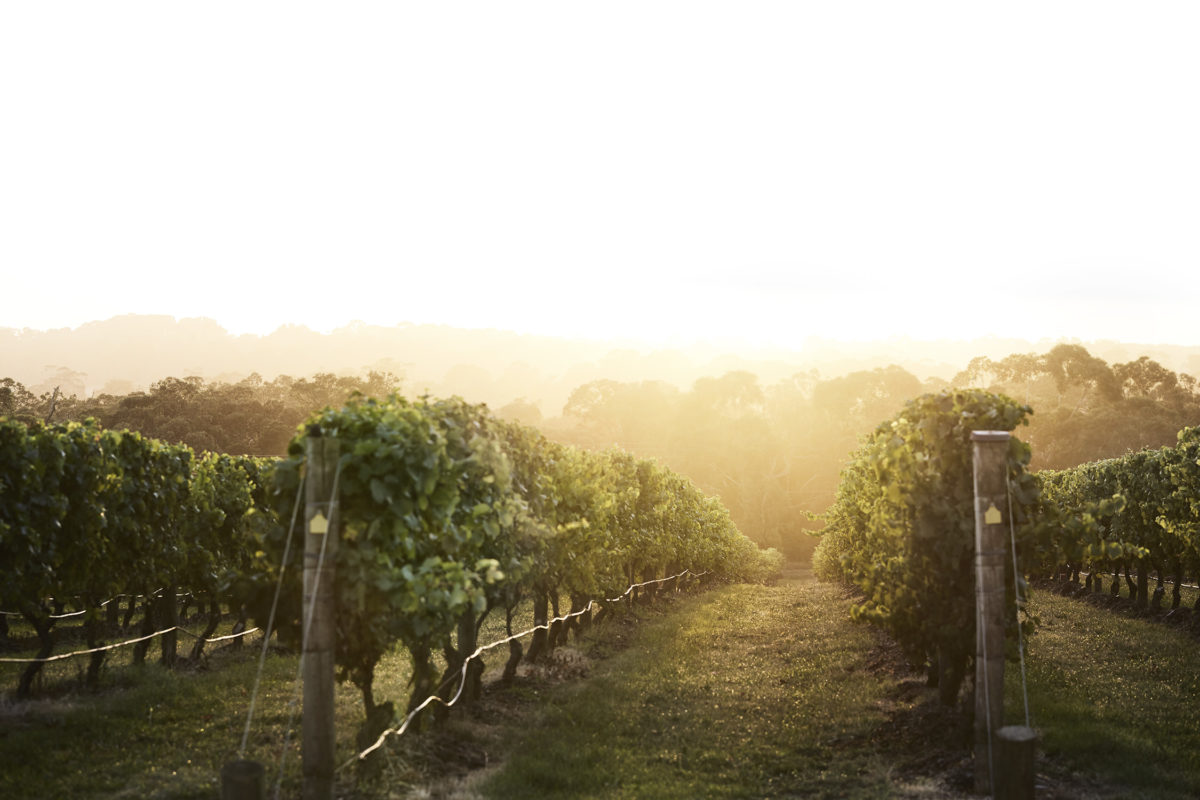 “But 90 percent of the production people in the Australian wine industry are men. And that has not changed since I left uni. It’s pretty bad.
So actually the Winemakers’ Federation, which is a national body, are concerned about that figure, especially with the graduate drop-off. 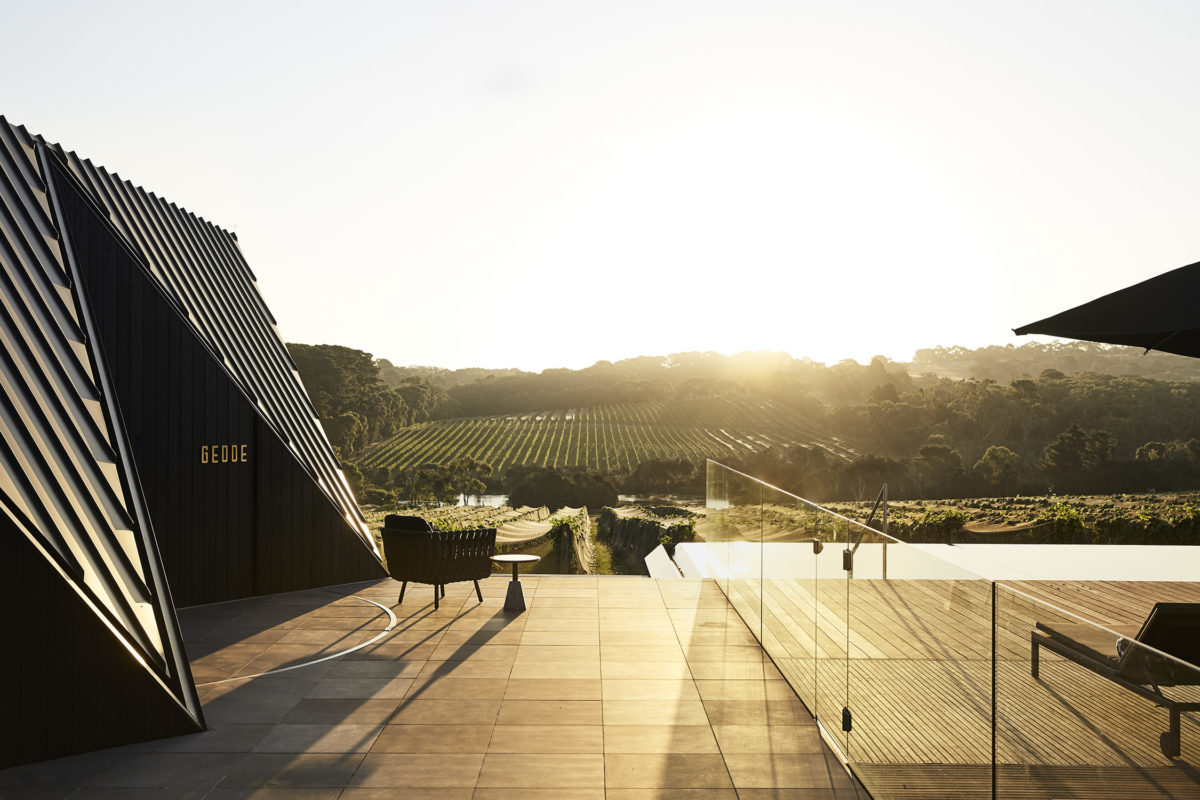 "They’re really trying to address it, but it comes back to the individual workplaces in lots of ways.
You’ve got to make an effort to make work possible for people.”

The sprawl of vineyards at the Jackalope is enough to capture my heart, but it’s, of course, their drinkable finished product—and the woman who makes it—that’s the real attraction. When it opened, the Jackalope absorbed Willow Creek and head winemaker Geraldine McFaul along with it, merging a hotel, winery, and restaurant into one entity.

McFaul, who has been making small-batch regional wines on the peninsula since the late ’90s, believes the acquisition was handled with respect. “[The hotel] really embraces the vineyard and the wine story,” she says. “They’ve built it into what they’re doing in a really sympathetic and beautiful way.”

In an industry where roughly 90 percent of the people producing Australian wine are men, McFaul and her assistant producer, Ashley, are some of the only women winemakers around. But McFaul stands out among the crowd for more reasons than her gender. She’s an expert in pinot noir, notoriously one of the most challenging grapes to grow well.

“It’s the Holy Grail. It’s the Princess and the Pea,” she says. “Anything you do in the field will show up in the wine.” 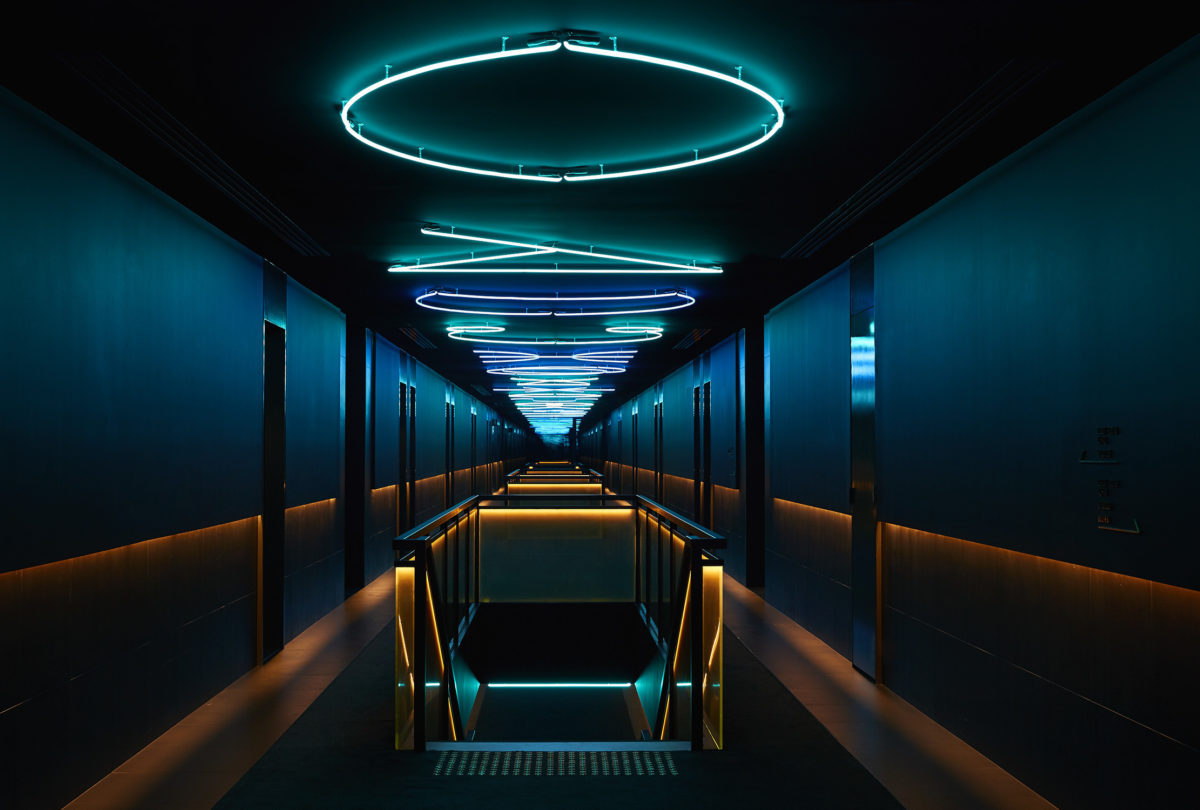 The hotel's futuristic interior makes a perfect foil to the natural landscape outside. 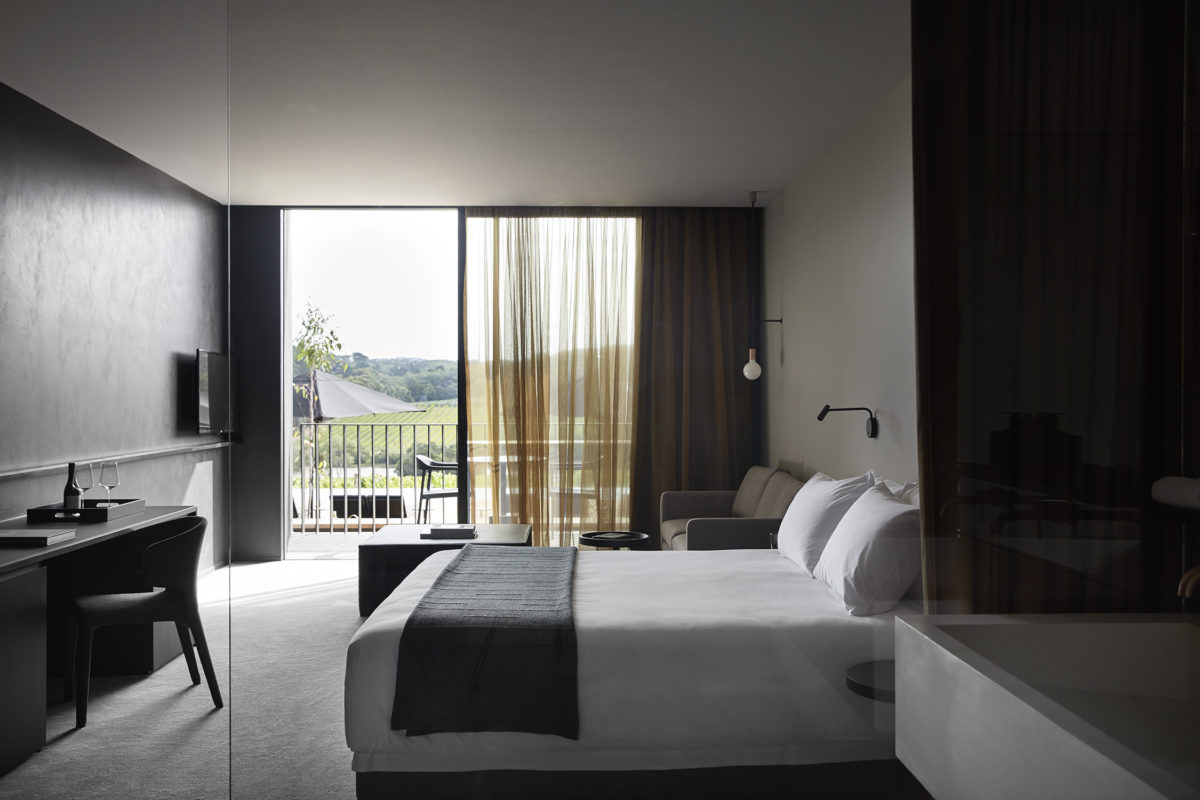 Each room comes with sleek decor and impressive views of the countryside. 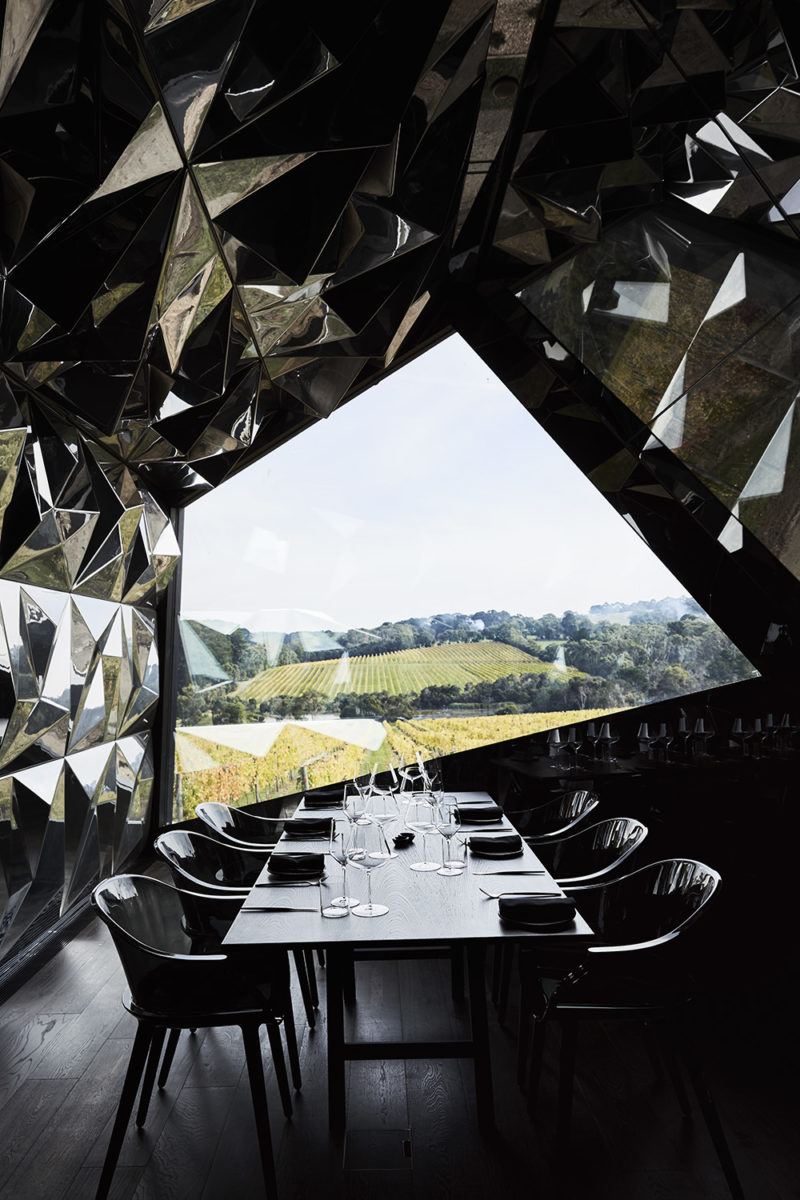 Sample Australian wines you can only find down under while gazing over the vineyard's 11 hectacres.

McFaul’s vintages can be found at restaurants and bars from Mornington to Melbourne, including the three on-site at the Jackalope: Flaggerdoot cocktail lounge, Rare Hare, and Doot Doot Doot. If the name doesn’t draw you in (they tell me it’s the sound a jackalope makes and I have no choice but to believe them), Doot Doot Doot’s contemporary upscale five-course tasting menus likely will. But, at least for now, you won’t be finding Willow Creek pinots in New York City wineshops, or anywhere else for that matter; McFaul’s production is never exported. Hers is a wine as singular as its maker and its environs.

“Pinot is so expressive of where it’s grown and every pinot is quite different in the way it expresses itself,” she explains. Willow Creek has six blocks of pinot in the vineyard and ferments and treats each one separately to preserve the individuality of each yield. Quite simply, McFaul says, “it’s special.”