Worth Traveling For: Inns of Aurora on New York's Finger Lakes

One of the rooms at the Inns of Aurora, featuring MacKenzie-Childs wallpaper.
SnapshotChloe Scheffe

The Inns of Aurora is a suite of four historic properties in Aurora, New York, a village in the state’s Finger Lakes region (population: 774*). Aurora is picturesque in just the way the term “village” implies. My stay there fell on the cusp of spring: lovely untouched swathes of snow blanketed all the properties’ great lawns, but the days were sunny and relatively mild. Inns of Aurora is the perfect refuge for the worn-out city-dweller. “Quaint” may be the cliche, but that’s what the Inns are. They have a small-town warmth that, combined with their aesthetic grandiosity, is completely novel.

Aurora has the special quality of feeling a bit outside of time. The majority of the inns were originally built before 1900; all four, and a fifth set to open in September 2019, were restored within the last twenty years under the careful eye of Pleasant Rowland, the founder of American Girl (yes, that American Girl) and Aurora’s great benefactor. She fell in love with the town during her time at Wells College in the early 60s; once she began restoring Aurora’s historic buildings, she couldn’t stop (her commitment to restoration is such that she sources building material from the same mines and forests it would’ve come from in the late 1800s, and at one point she had all the above-ground telephone lines in downtown Aurora moved underground so that the streets would look as they did pre-electricity).

Her influence was everywhere—in getting to know the Inns, I felt that I got to know her. They are enormous properties that still manage to feel incredibly homey. Each has only a handful of bedrooms, to start, supplemented with many common spaces that encourage interaction between guests. Much of the art is from Pleasant’s personal collection, which is particularly focused on modern painting, or was selected by her specifically for the parlor or library or dining hall or bedroom it ended up in. Each property is run by an innkeeper, not a manager. My innkeeper, Cody, encouraged me to walk around in sock feet, as I would at home. 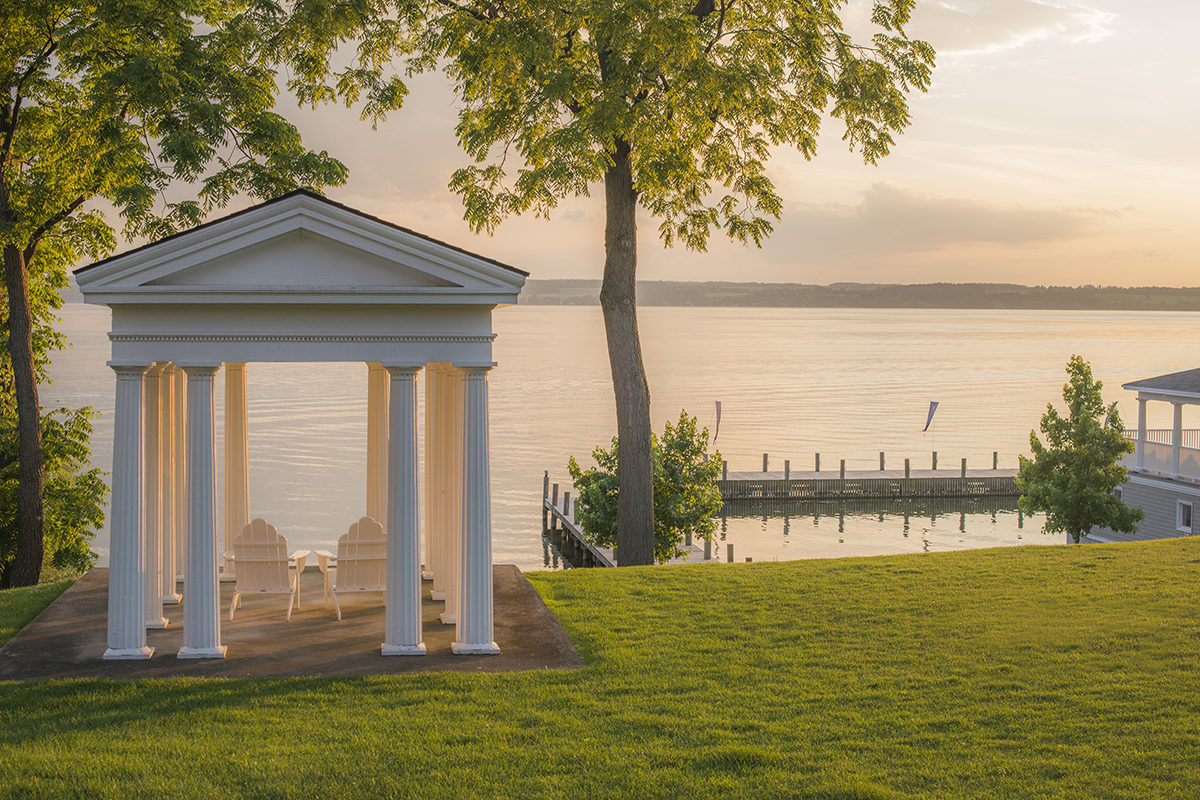 Cayuga Lake, the second-largest of the Finger Lakes. 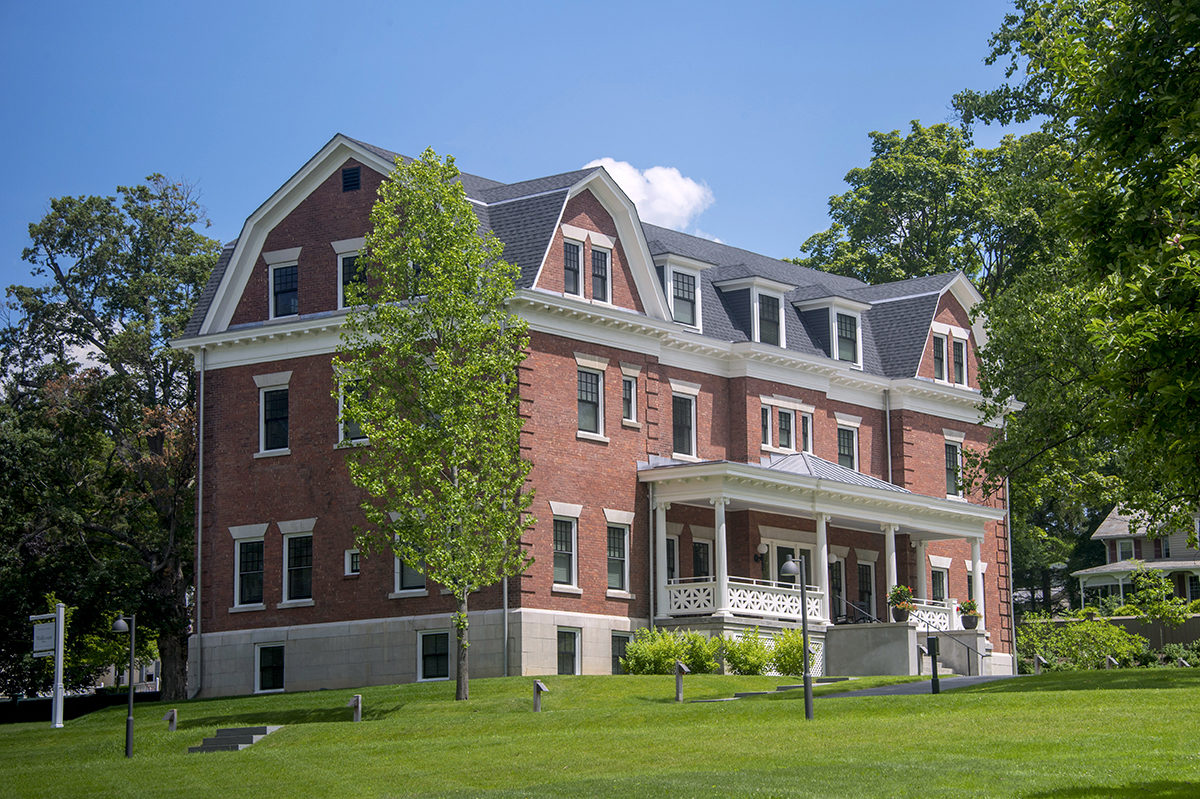 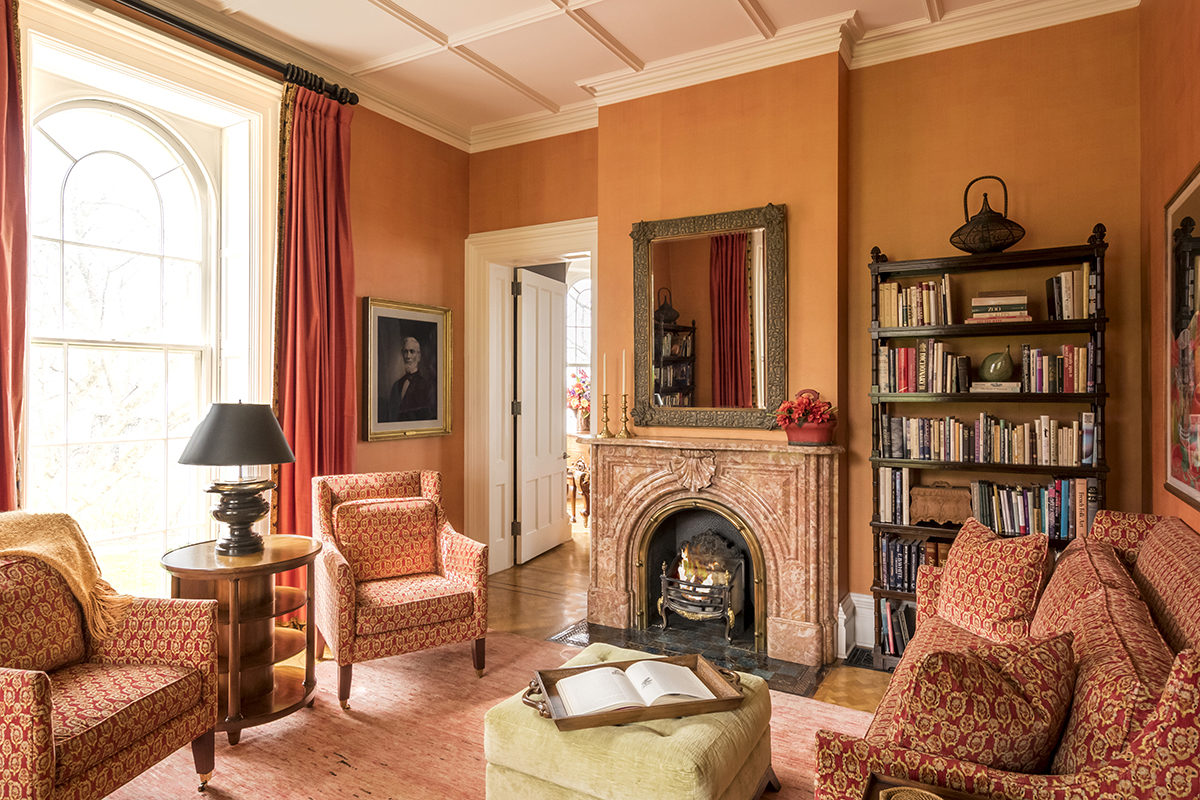 The library fireplace at the E.B. Morgan House.

What you really want is rest and relaxation.

A mix of families, wellness aficionados of all ages, and retirees. Quiet types, for the most part. 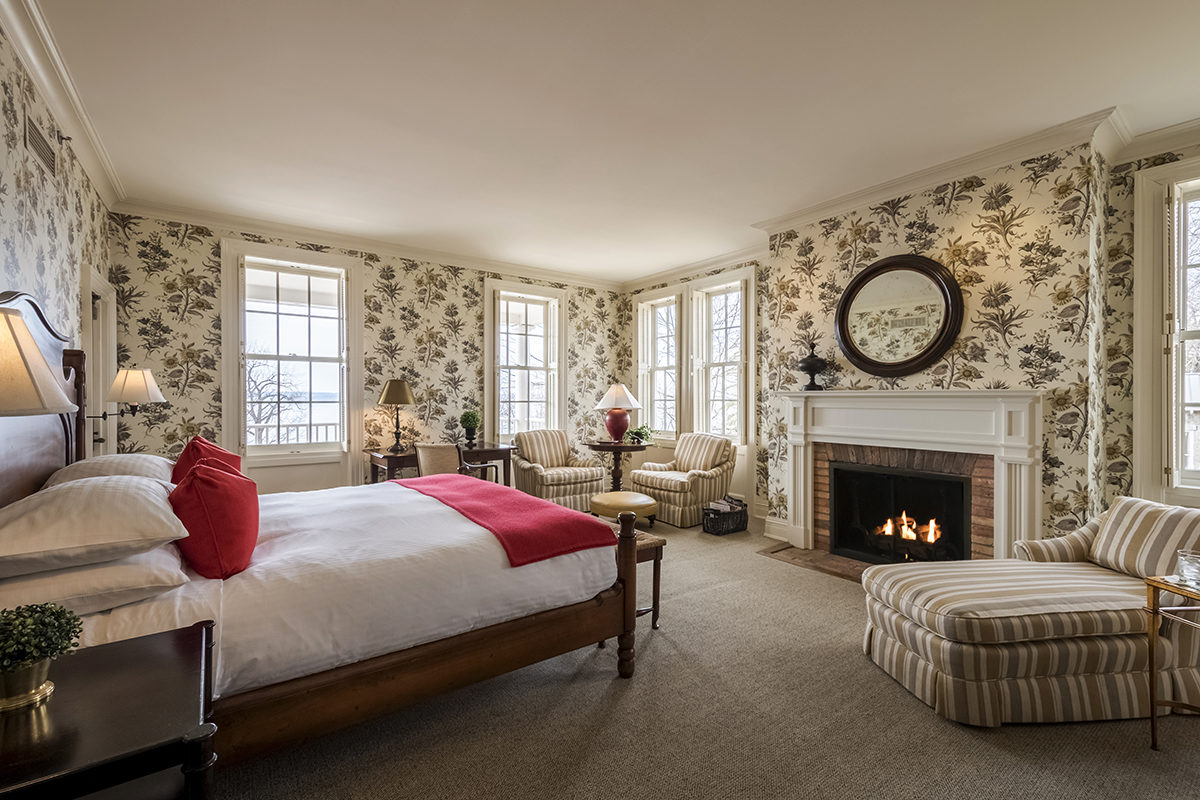 A suite at the Inns of Aurora. 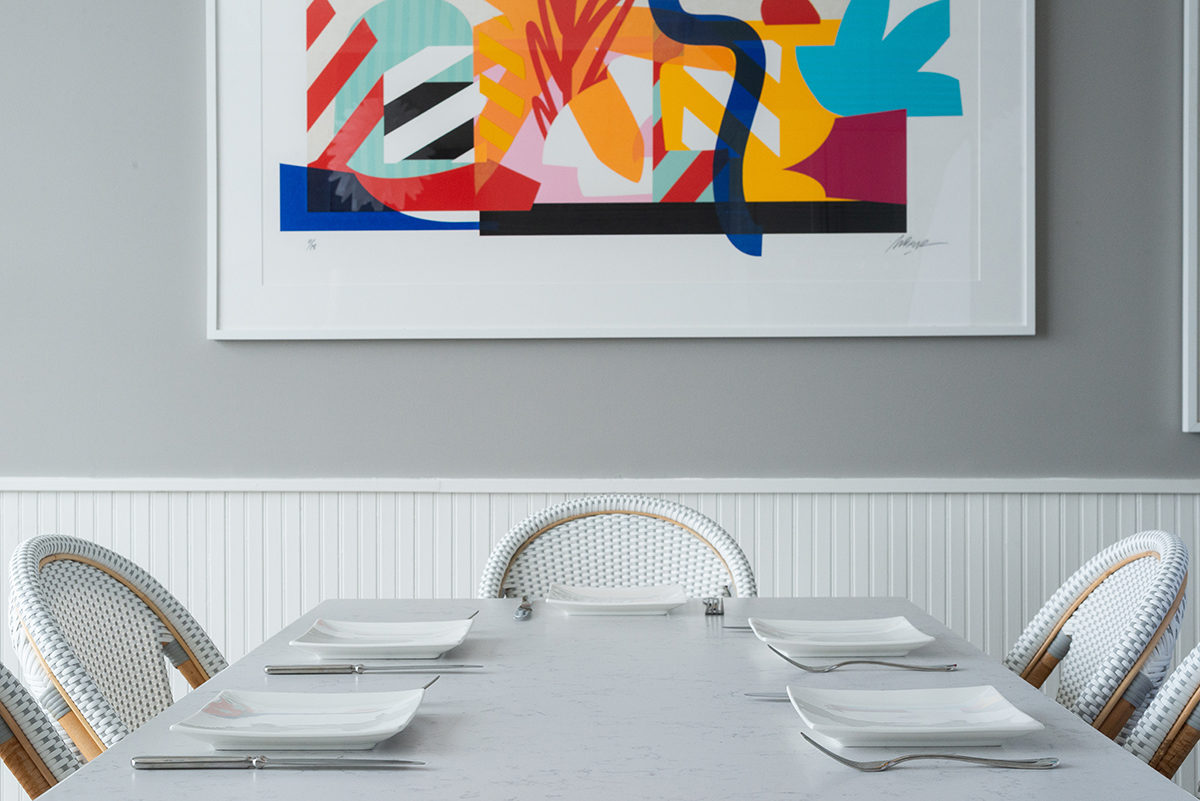 Aurora Cooks, the demonstration kitchen just down the street from Inns, offers an assortment of tastings or a delicious meal. 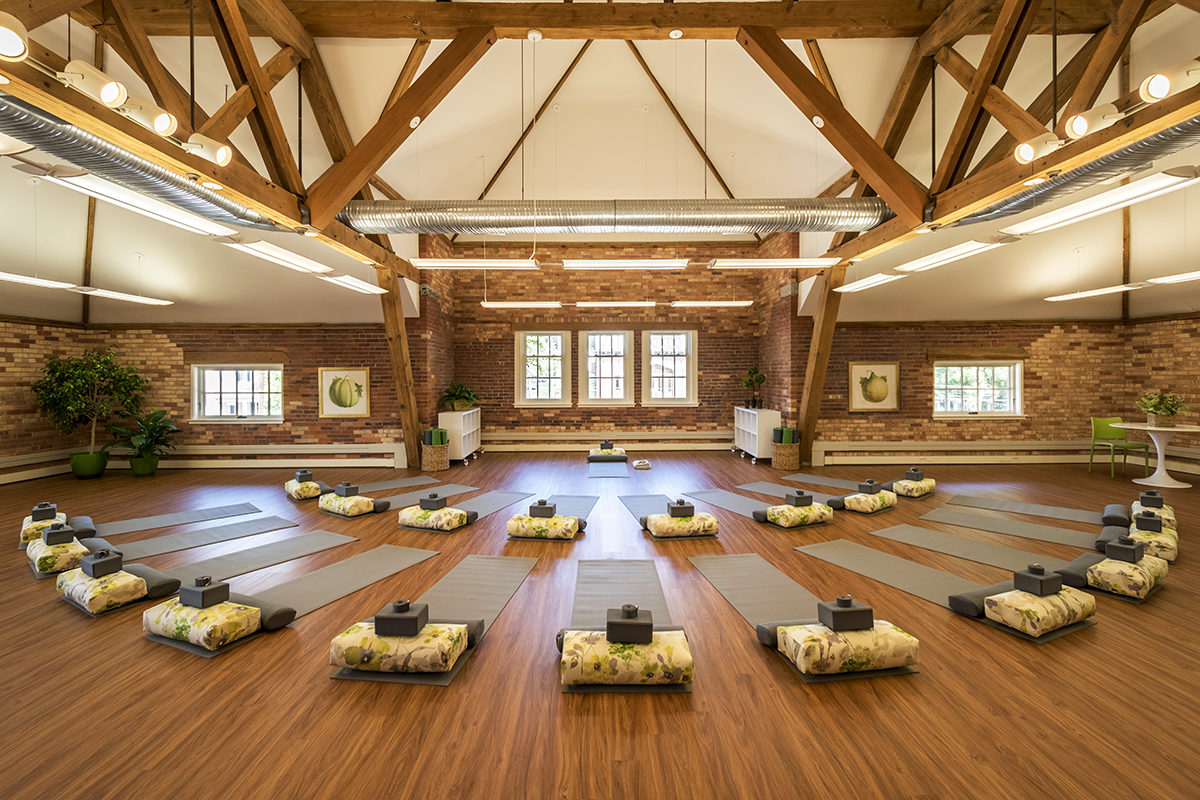 The yoga loft at the Schoolhouse, Inns of Aurora's activity center.

The Inns of Aurora campus is open year-round, and it’s beautiful in every season. Take your pick, and pack accordingly. In the late spring and summer, Inns facilitates a plethora of water-based activities on Cayuga Lake, the second-largest of the Finger Lakes, so don’t forget your swimsuit. Last but not least, pack a book or two, or stock your e-reader. Inns prides itself on making leisure anything but guilty.

Put in a request for snacks. I tend to be dismissive of this kind of offering, because other hotels have so often let me down. Not so at Inns. There you’ll get hot coffee and cold draft lattes from La Colombe, herbal teas hand-blended by Director of Serenity Laura Coburn, a range of fancy prepackaged snacks, and house-made granola bars so good that I put one in my bag for later at least twice.

Stop by Aurora Cooks, the demonstration kitchen just down the street from Inns, to dive into the finer points of chocolate tasting or beer braising or simply to prepare a delicious meal. Feeling more ambitious? Plan a day trip to Niagara Falls.