Monstrous Del Mañana is a post-apocalyptic tropical garage band from Mexico City. Recently, they performed at Jamaica Cafe & Records (more on that below), calling the experience "familial" and warm.
DispatchJordan RomeLuis Martínez Macías

From reggae to R&B and mariachi, reporter Jordan Rome got the scoop on the booming live music scene in Guadalajara, Mexico.

Guadalajara may be known for its mariachi, tequila, luchadores, and charrería, but it’s the modern music scene that is truly breaking ground here in Mexico’s “Pearl of the West.” Guadalajara’s musicians express themselves beyond words, navigating unpredictable times with bold rhythms and community engagement through live shows.

Guadalajara’s music scene is an intricately intertwined network, which is what makes it sustainable, even as hundreds of independent music venues have shut down recently. Though Tapatíos valiantly fought to keep their beloved spaces afloat, many cherished venues didn’t survive the pandemic. As a result of their banding together, though, many locals feel an even stronger community has emerged, despite venue closures.

After a year of living in Mexico—and three months of planting roots in Guadalajara—I believe authentically experiencing the city starts with getting to know its musicians. Music isn’t some random collection of static sounds, beats, and rhythms; it’s the heartbeat of the city.

Hearing these artists’ perspectives gives a look inside the spirit of Guadalajara in a way most travel guides can’t. Here, we’ll introduce you to seven local musicians and bands, where they perform and frequent, and their hopes and dreams for the future of Guadalajara’s music scene. 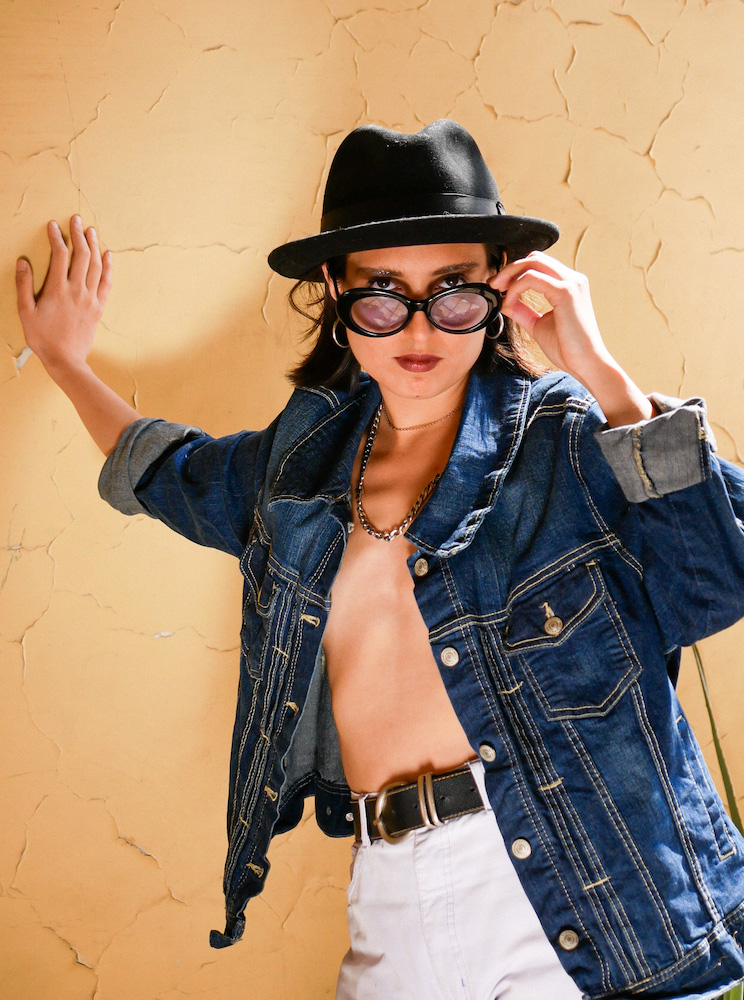 Ana Verá, meaning Ana “will see,” is a singer-songwriter who plays with a jazz/R&B ensemble. 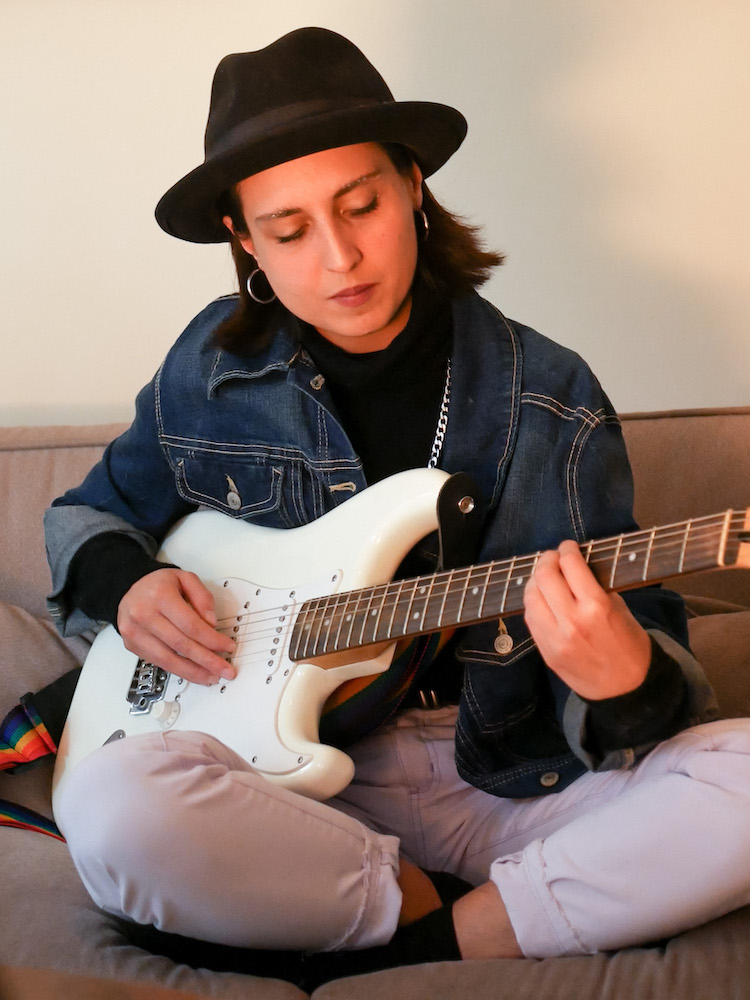 Verá's latest single, "Fotografía," was created by collaborating with other musicians in Guadalajara.

Ana Verá, which means Ana “will see,” is a singer/songwriter from Mexico City. Her music is soulful and belty, featuring Latin twists on R&B and jazz rhythms. Her latest album, Las Puertas, originated in true Guadalajara fashion: collaboration. Every Monday and Tuesday, Verá would visit bar Silvestre (closed during the pandemic) to hear live music. There, she met Malambres and Marcos Díaz, musicians who invited her to collaborate. They later went on to create the hit single ‘Fotografía’.

Verá: In the morning, I go to Biolento, where I have good coffee with friends who share my passion for music. At Biolento, you’ll see musicians, artists, and interesting, well-dressed people hanging out. The service, food, coffee, and music are great. My go-to order is chilaquiles with a black coffee.

Worth Traveling For: PalReal Café in Guadalajara, Mexico → 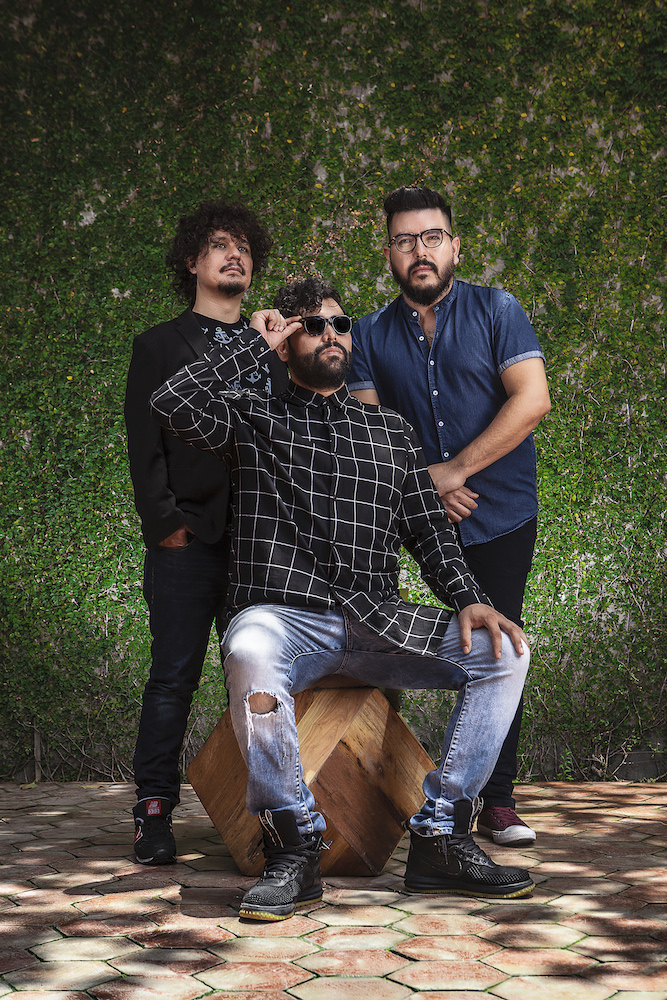 Troker is a staple of the Guadalajara music scene, performing together for 17 years. Photo by Calavera Estudio.

3 p.m. — An Afternoon Mezcal with Troker

Troker is a Tapatío band that’s been jamming together for 17 years. Their international audience describes them as “a mix of mariachi, plus tequila, lime, and salt.” While their musical foundation is jazz, their sound is imbued with their Mexican roots and tinges of mariachi, mambo, and metal, plus the music they grew up listening to in the barrio. For Troker, Guadalajara’s music scene wouldn’t be complete without Centro Cultural Breton, where you can hear live music from Tuesday to Saturday. Breton nearly closed during the pandemic, but because it’s so special to local musicians, they offered to play for free and kept it afloat.

Mares: For Mezcal, De la O is a great place. Also, Pare de Sufrir is perfect since it’s actually owned by a mezcal sommelier, which makes you trust the quality because the owner knows his craft. 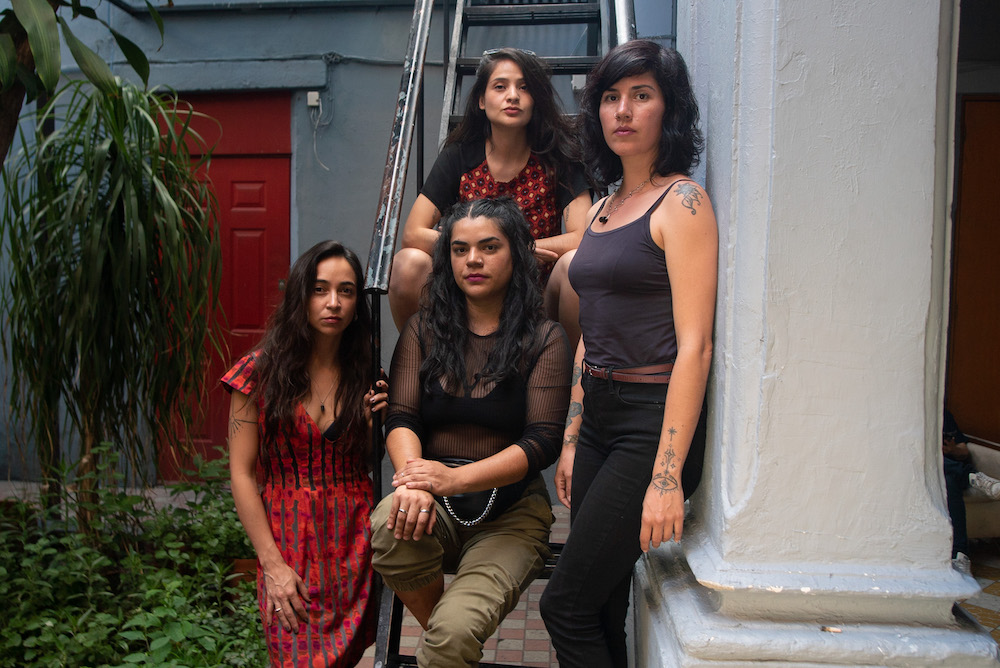 Neptuna is a rock band bringing a feminist edge to the Guadalajara music scene. 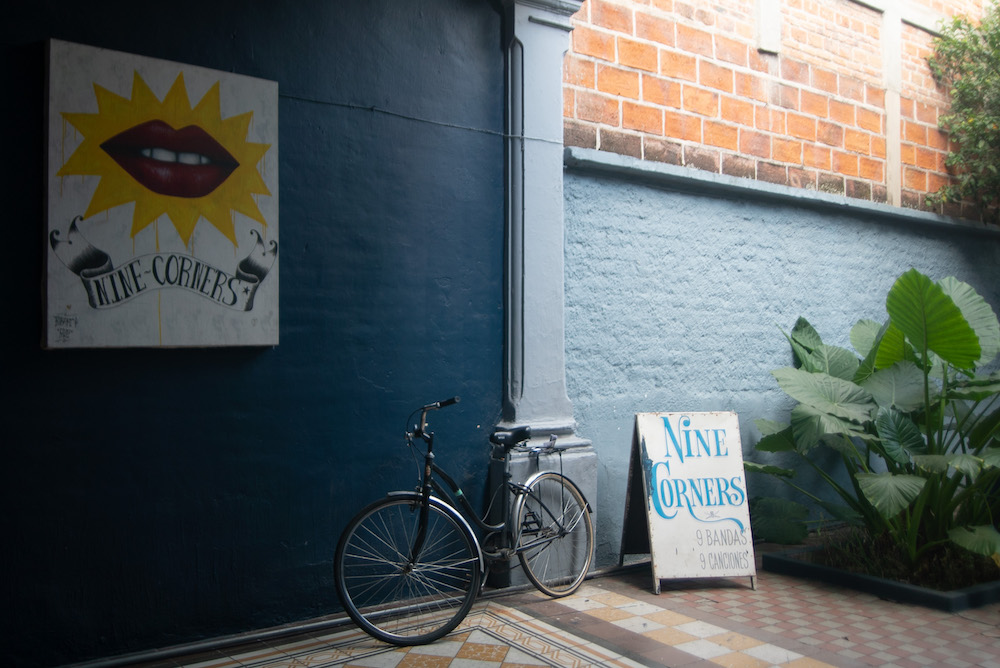 Nine Corners is a popular rehearsal space in Guadalajara where you can get the scoop on what's happening in the city.

Neptuna, an eclectic band that plays sabrodelic rock, is a “united feminine front” paving the way for more female representation in the music scene. Troker says they’re proud and inspired to see a group of women from their city emerge on the scene, noting the importance of women in Mexico having safe spaces in music. Ana Sophia, Neptuna’s bassist, says the lack of venues has proven difficult for the group, but she and her bandmates are grateful for active spots like C3, Anexo, Rooftop, and Centro Centro. The women of Neptuna say the most intimate way to get to know the music scene is to tour its rehearsal spaces.

Nathalia Romo, Neptuna’s drummer, enjoys listening to live music over a beer at Foro Independencia, which occasionally has a hot dog stand out front.

Cyneli Chávez, Neptuna’s keyboardist: Mexicadelia, a collective, is a cool resource that posts about upcoming shows.

Why Cumbia Is the Musical Soul of Mexico City → 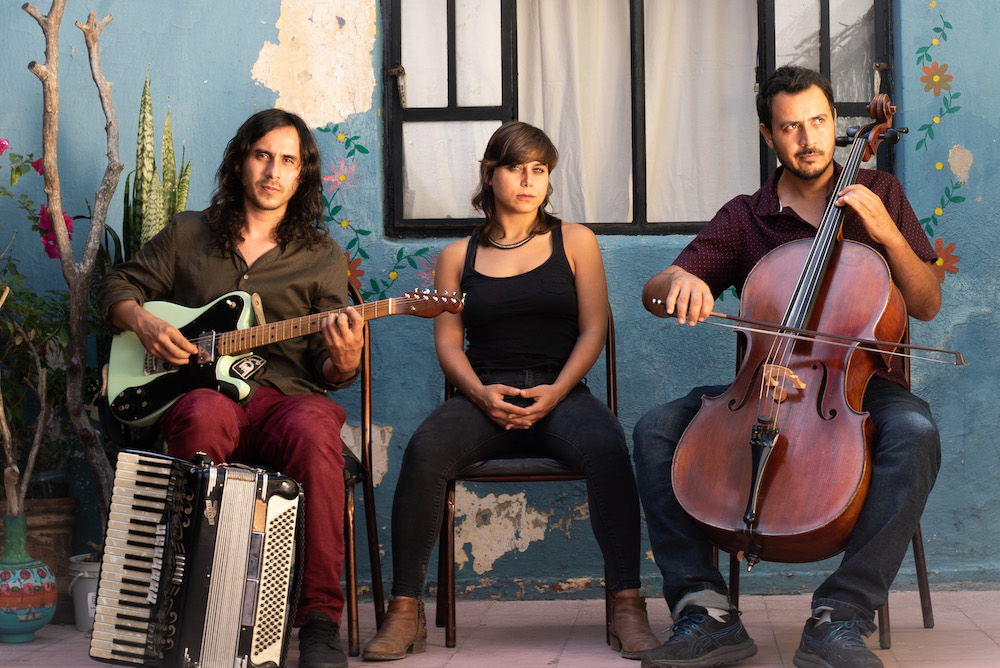 Abdulhamid: People started opening their homes for jam sessions and intimate concerts when restaurants and bars were closed during the pandemic. On a perfect evening, I’d open my home, Búnker Lunar, an independent cultural space for a music session and cook for everyone. Later, I’d go to Apolo for more live music and a round of ping-pong! 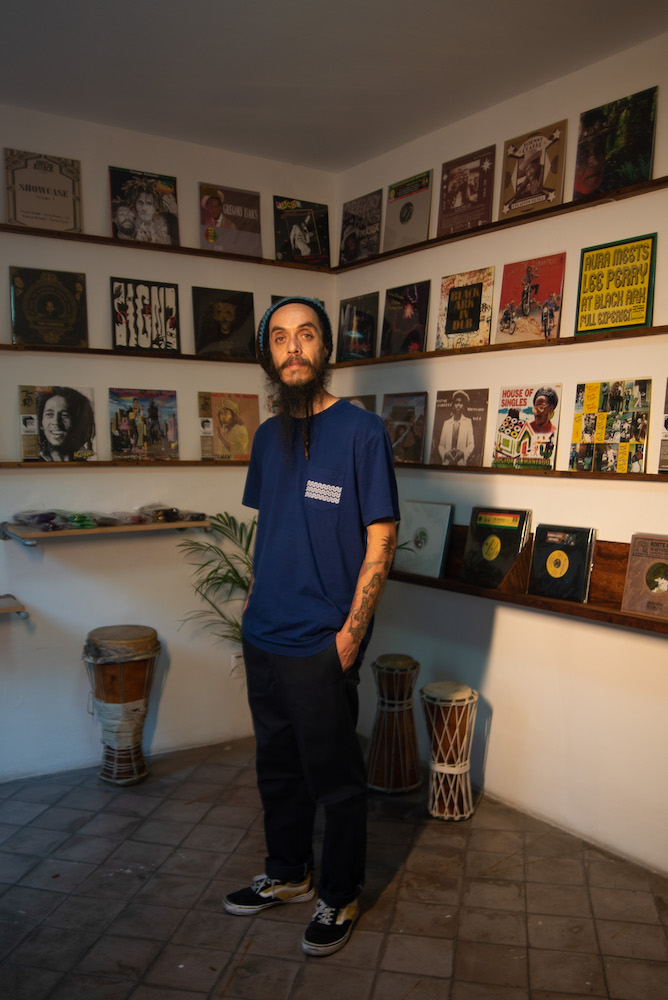 Manu (pictured) is the owner of Jamaica Cafe & Records. The business started out as a record shop before evolving into the beloved creative hub it is today. 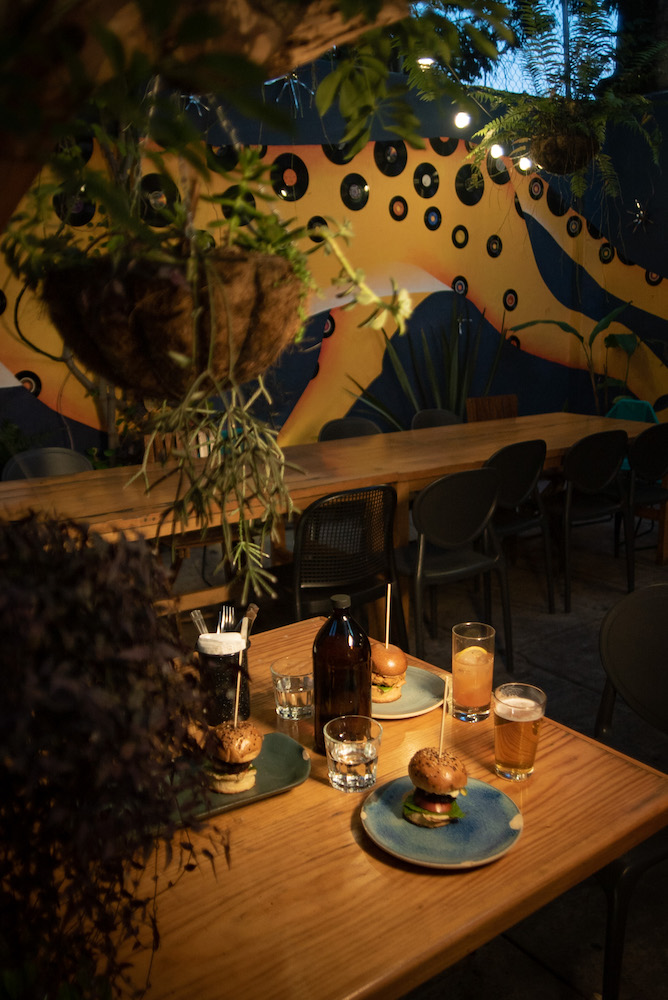 Jamaica Cafe's vibes, food, and music were praised by every artist we interviewed.

Márquez, founder and director of Ceiba Studio, also took a DIY approach when his reggae band, Montebong, needed a place to record and rehearse. Ceiba Studio originated through this necessity, and became a creative hub. Pre-pandemic every Thursday, they hosted Improvinciando, a night of improvised jams. Ceiba continues to host live music, mini concerts, painting exhibitions, and adult and children’s dance classes. This year also marked their first festival on the shore of Lake Chapala. In the future, Raul imagines Ceiba expanding as a secure space for talent, as well as becoming an official production company and record label.

6 Artists to Watch in Guadalajara, Mexico →

Manu is the founder of Jamaica Cafe & Records, and one half of the duo Dub Iration. His pure love and dedication to the spirit of reggae and dub led him to open The Dub Room in 2010, a record store that later evolved into Jamaica Cafe & Records. Jamaica Cafe was the most mentioned place amongst all the musicians I spoke with, and for obvious reasons. Its cozy, minimal interior feels like home. Every nook and cranny is intentionally curated, paying homage to Reggae legends like Lee “Scratch” Perry and Bob Marley. Monstruos Del Mañana, a post-apocalyptic tropical garage band from Mexico City, recently played here, and said it was an incredible familial experience. They really appreciate how Manu tries to help the community and its musicians. The cafe’s vegetarian menu features rainbow colored buns alongside traditional Mexican dishes made meatless. In true Rastafari fashion, the hospitality here is warm and unmatched. Visit, and you’ll be singing “ital es vital” as you snack on a soy-based torta. 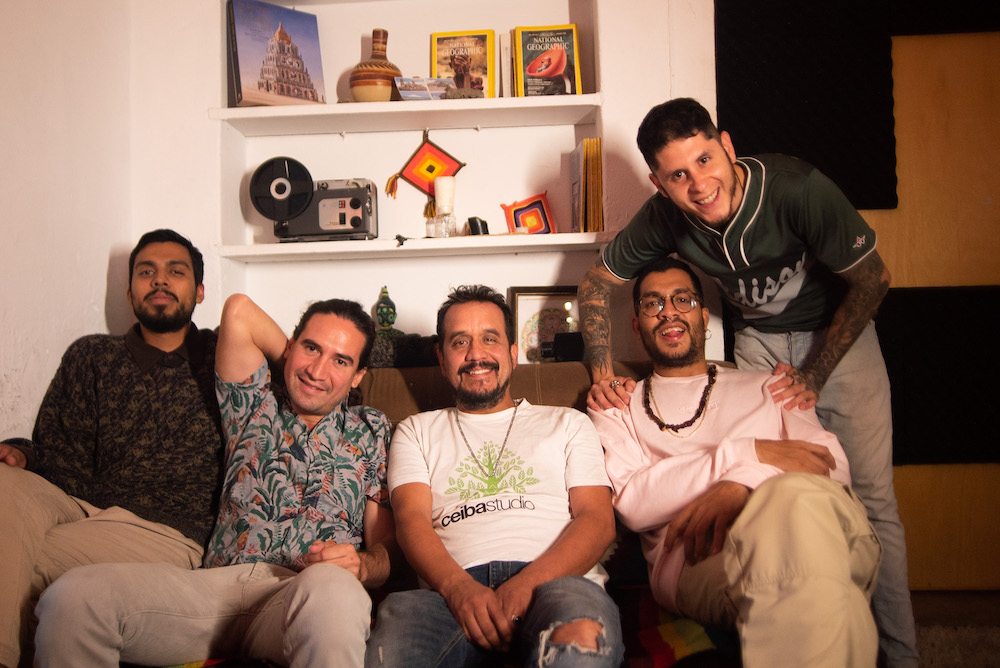 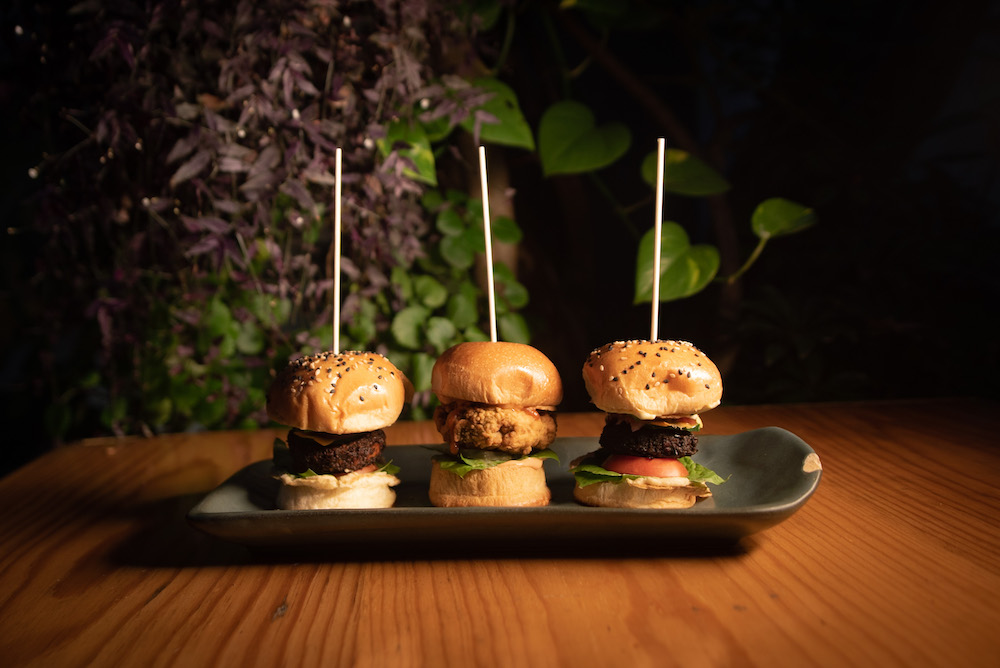 After all the jamming you'll do in Guadalajara, don't forget to grab some veggie sliders at Jamaica Cafe & Records.

Opt for an apartment, homestay, or hotel in Colonia Americana. This iconic neighborhood is an ideal introduction to the city because of its central location and loads of hip bars, restaurants, cafes, museums, and historical sites. Keep in mind this is a very active part of the city, so it may not be a fit if you’re looking for something more laid-back. For a quieter stay, you’ll find more tranquility in nearby Santa Teresita, also home to the lively Mercado Santa Tere and Corazón a granel, a woman-owned bakery with some of the best bread, coffee, and sweets in the city.

Tapatíos (Guadalajara locals) are extremely friendly, eager to help, and genuinely curious about foreigners. It goes a long way to try to speak to strangers, ideally in Spanish. No matter how broken your verb conjugations may be, even a simple hola or buenas tardes goes a long way!