How Saving Baby Turtles in Costa Rica Taught Me Perseverance

As a Global Glimpse ambassador, Elly Rokeach had the opportunity to volunteer at Pacuare Reserve in Costa Rica.
Travel JournalElly Rokeach

Stepping onto the beach of Pacuare Reserve in Costa Rica at night was like stepping into the abyss. It’s pitch black and you can’t turn on a headlamp, since it could confuse baby turtles making their way to the ocean. After a few minutes, your eyes begin to adjust and you can just barely make out the sand in front of you, dark waves crashing onto the shore.

We walked three kilometers north, each carrying a water bottle and rain jackets in case of a sudden downpour. Though it was around 8 p.m., I was sweating from the summer humidity. I slowly became more comfortable navigating the darkness and glanced out towards the horizon. Lightning flashed miles away, briefly illuminating the clouds and ocean below. It felt like, at any moment, a six-foot-long majestic creature could emerge—a leatherback sea turtle coming ashore to lay her eggs. Stopping for a break, we all lay down and gazed up at the stars and meteor showers. I felt meaningless and hopeful all at once.

Photographer Adraint Bereal on His First International Trip to Belize → 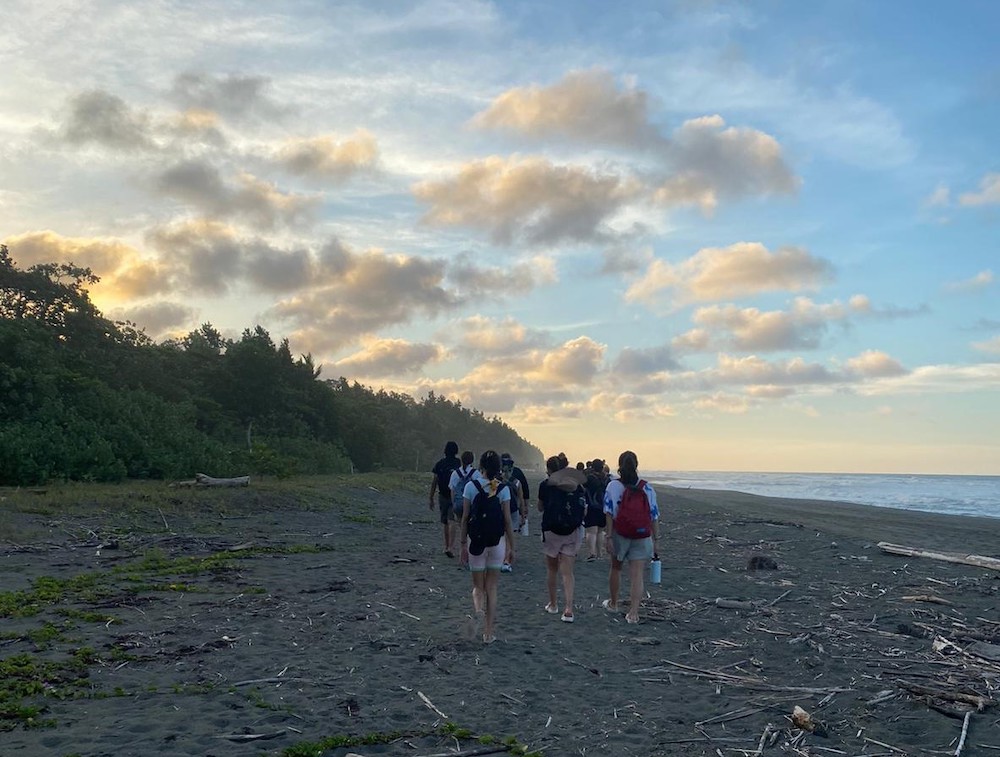 The debris which had washed ashore due to summer tropical storms meant that Elly and her peers had a big task: clearing the way for newly-hatched baby turtles heading out to sea. 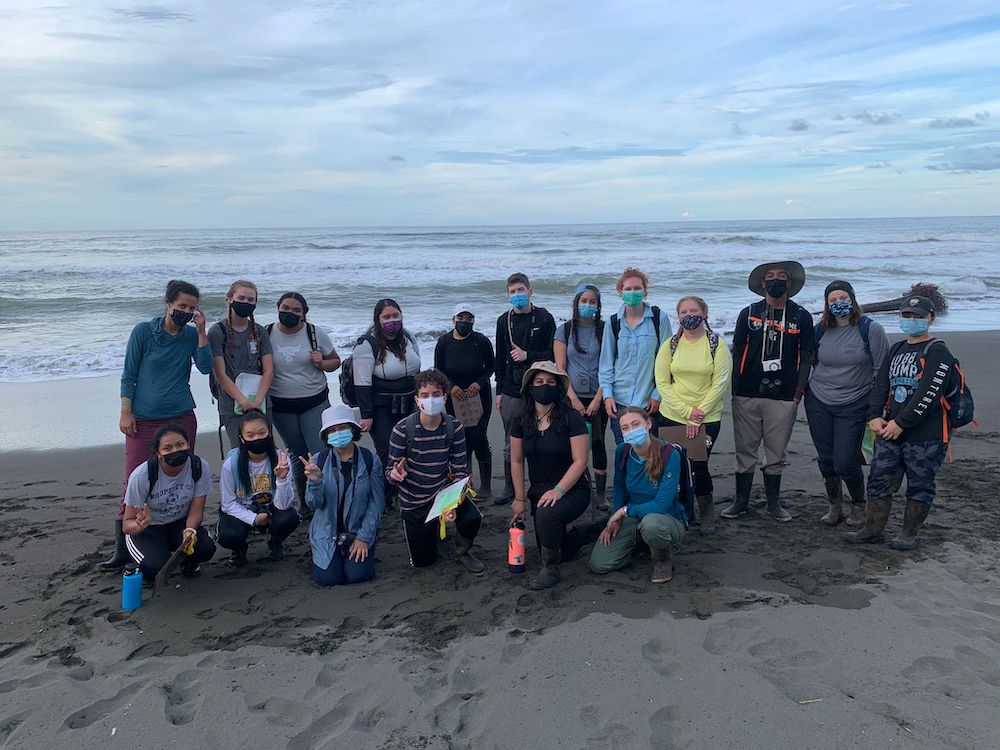 Global Glimpse awards trips to students from diverse backgrounds with the goal of expanding their horizons through travel.

I was 16 when the pandemic began and could barely envision myself on any college campus. Worried about my elderly parents, I went into complete isolation, spending part of junior year and senior year online. Surrounded by so much uncertainty, some days I could barely stay afloat. Being accepted to my dream school was a flash of hope, though short-lived as I realized how financially unfeasible it was and began applying for scholarships.

Growing up in Oakland, California, I often felt trapped in an urban environment. As the pandemic wore on, I felt more and more disconnected from nature. My trip to Costa Rica would be an opportunity for me to reconnect: not just with nature, but with myself. The trip seemed tenuous in the days before our group’s departure. I remember packing and simultaneously wondering if it would really happen. Heading over the San Francisco Bay Bridge toward the airport at 2 a.m. felt surreal; stepping into the actual terminal felt like a miracle.

By the time we finally landed at Juan Santamaría airport in San Jose, it was night again. The next morning, I spent the four hour bus ride to the reserve glued to the window, watching hills of lush greenery flow by. In the mountains, I saw clouds of mist gathering above treetops. As we continued east, local markets and brightly colored houses appeared. Eventually, we loaded off the bus and onto a small motorboat. As the boat picked up speed, we felt the wind in our faces and watched massive palm fronds go by. We didn’t know it then, but days later we’d see two crocodiles in that same lagoon—an adult hiding in the water, and a baby on a log. 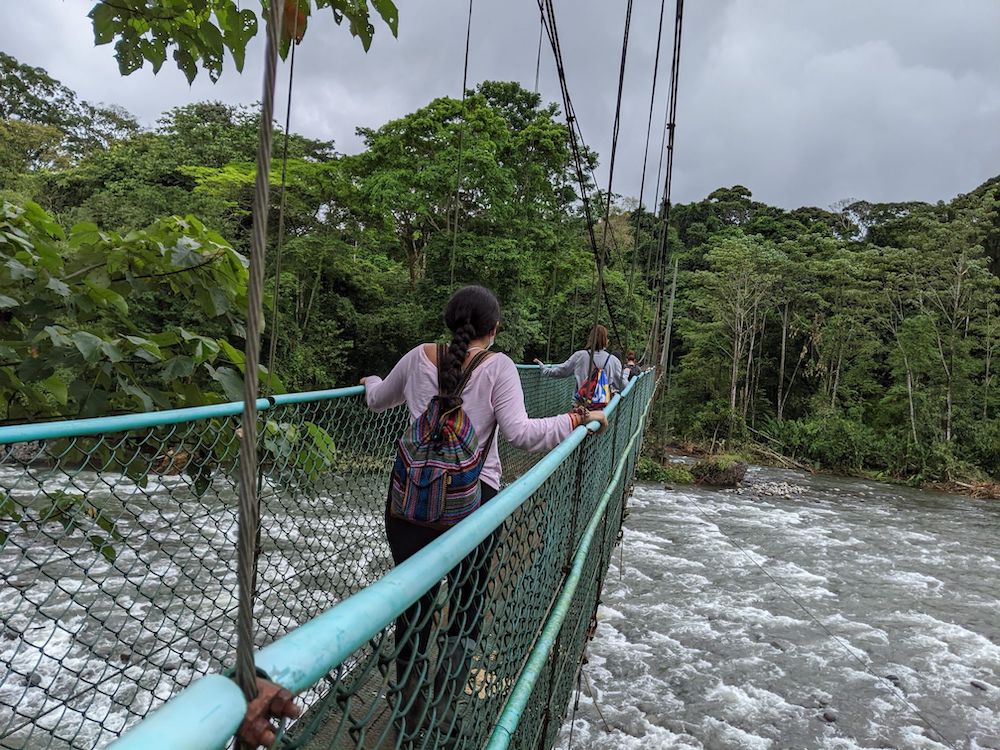 Rokeach: "Growing up in Oakland, California, I often felt trapped in an urban environment. As the pandemic wore on, I felt more and more disconnected from nature. My trip to Costa Rica would be an opportunity for me to reconnect not just with nature, but with myself." 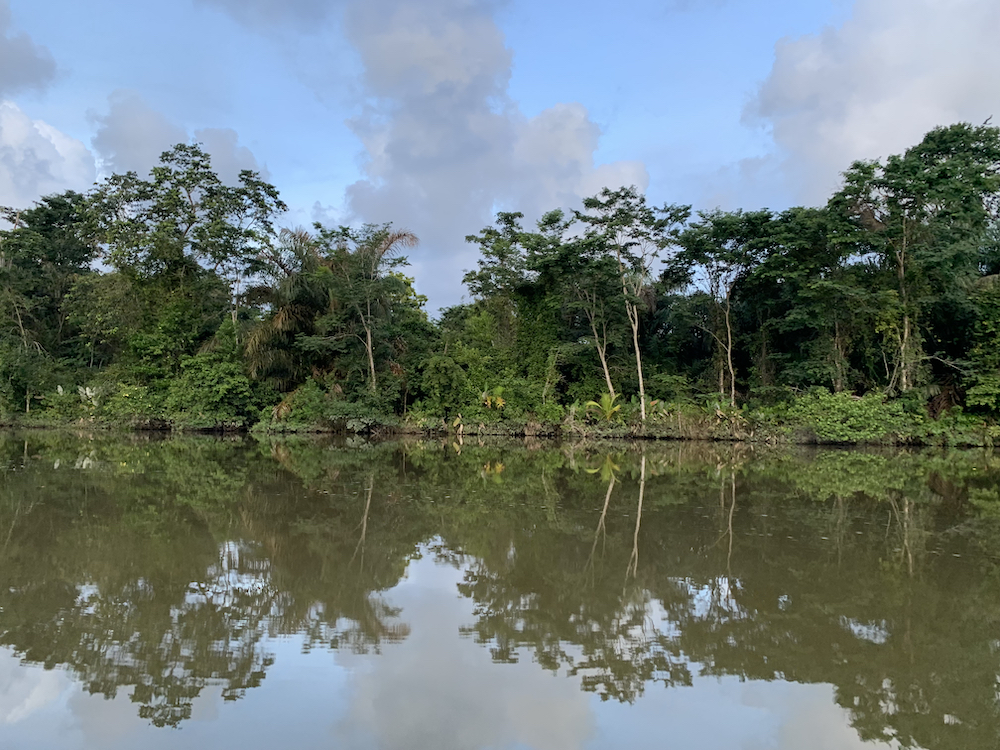 Costa Rica's lagoons are home to a range of wildlife, including crocodiles. Even these fearsome predators contribute to the interconnected ecosystem.

When I stepped onto the reserve, the air smelled sweet. We walked along a dirt path past a few wooden houses, and the comedor, where we’d eat our meals. Our instructors from Ecology Project International, Iris and Juan Carlos, told us about the surrounding biodiversity, describing various species and their roles in the ecosystem. We heard rustling in the trees, and they told us to look up. Four howler monkeys were hanging by their tails. Later, walking through the rainforest, we were careful not to disrupt the thousands of leaf-cutter ants, because even the smallest species play important roles in the ecosystem. We made it to an opening in the forest where agami herons live and watched them fly from branch to branch. I had never before seen so much wildlife in one place. 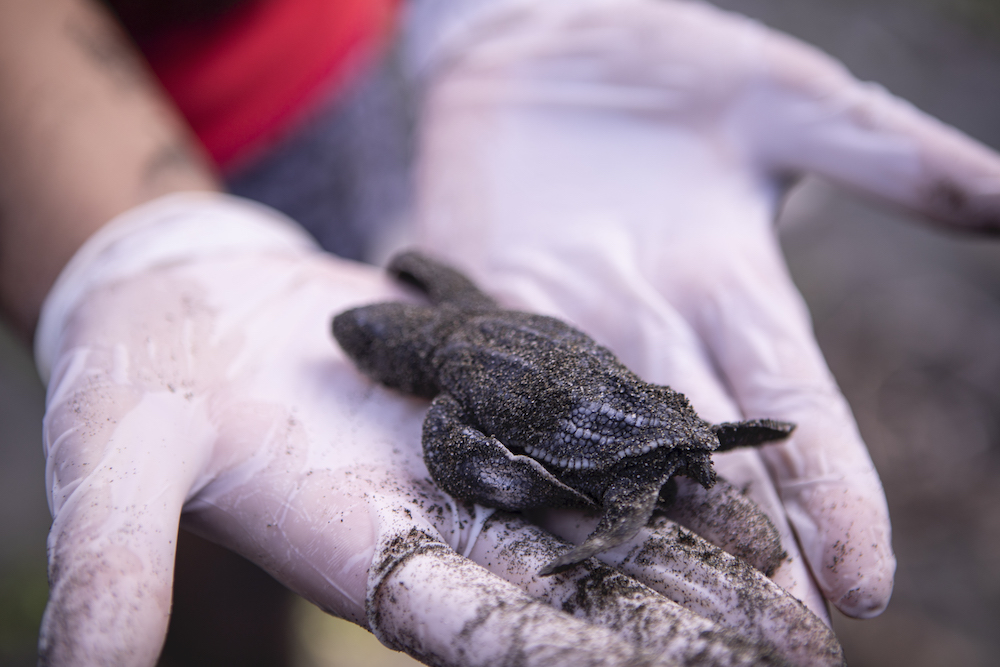 Leatherback sea turtles undergo major trials in the first few hours of their lives, from hatching on the beach and making their way into the water. 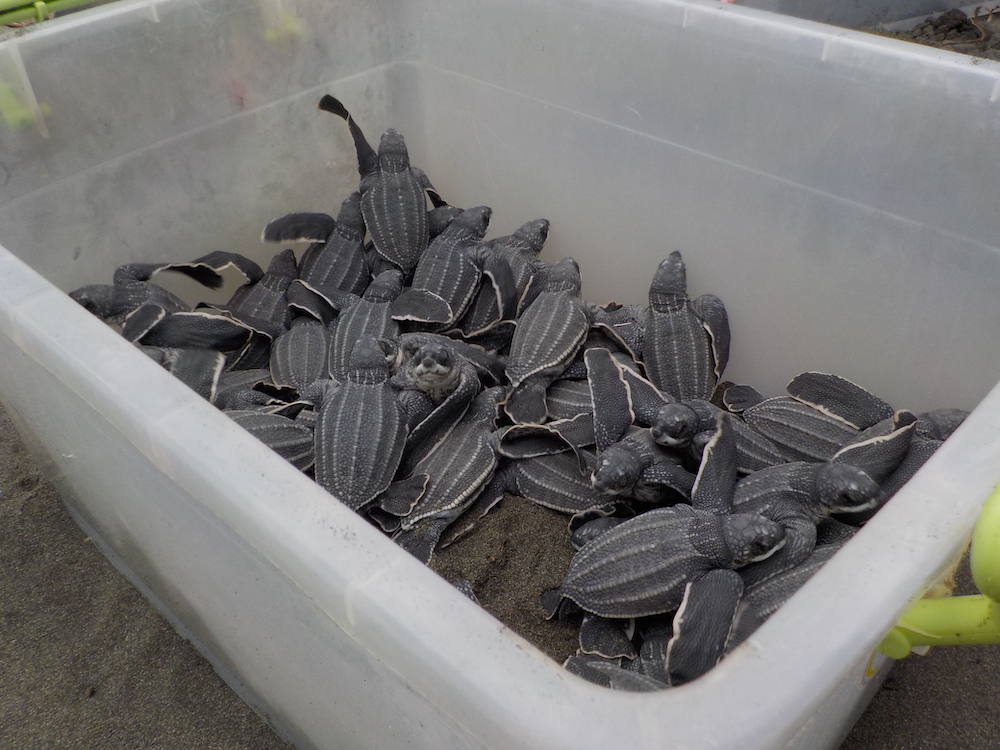 It's hard to imagine these tiny newborns will grow to their mother's size someday. At 6 feet tall, adult leatherbacks may have looked like sea monsters to sailors. 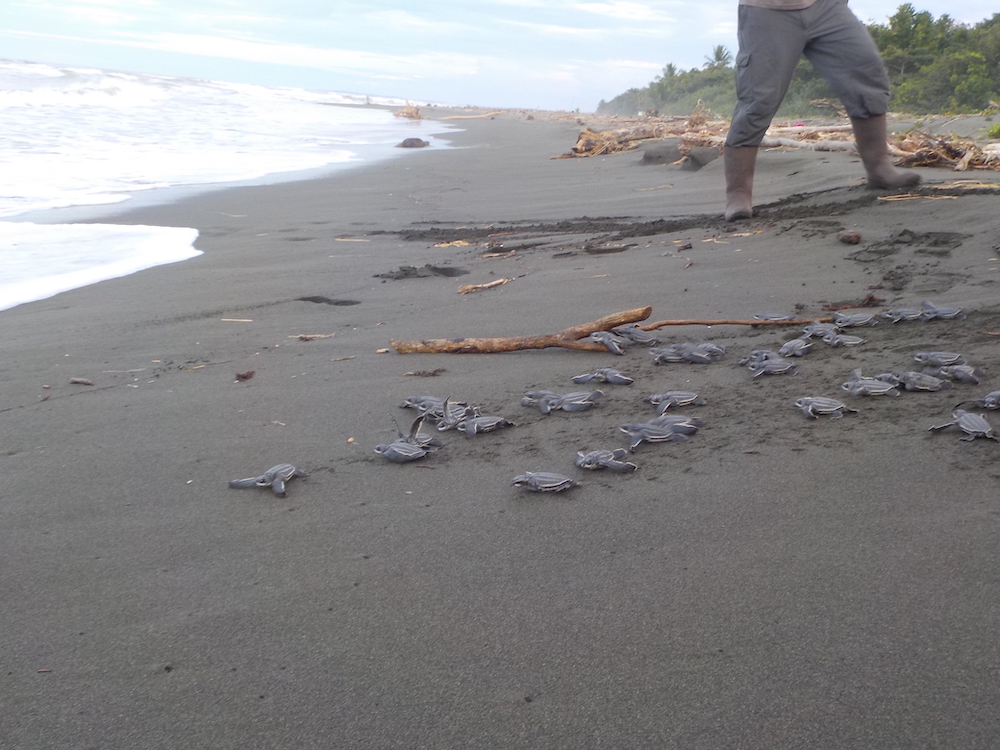 Since only 1 in 1000 newborn sea turtles survives the journey, sometimes they require a bit of help from volunteers.

The most memorable animals were the ones we helped with our own hands: the baulas, endangered leatherback sea turtles. After a mother lays her eggs, she returns to the water, leaving them to hatch on their own. Since only 1 in 1000 survives, newborns need every chance they can get. On Pacuare Reserve, nests are excavated and eggs are carried to the hatchery. Newly-hatched turtles are guided down to the sea by researchers. Working in the hatchery every night in shifts, we ensured that hundreds of baby turtles made it into the water.

A week before we arrived in Costa Rica, severe storms hit Heredia, Cartago, and Limón Provinces, leaving the beaches covered in debris and trash. During several hours of cleaning, we rescued three trapped baby turtles that had escaped the hatchery the night before. Hopelessly entangled in debris, they had no way of making it to the water unassisted. In a lot of ways, I felt like one of those baby turtles, finally being set free.

How to Plan a Trip to the Galápagos Islands: Where to See Sea Lions, Tortoises, and Sharks → 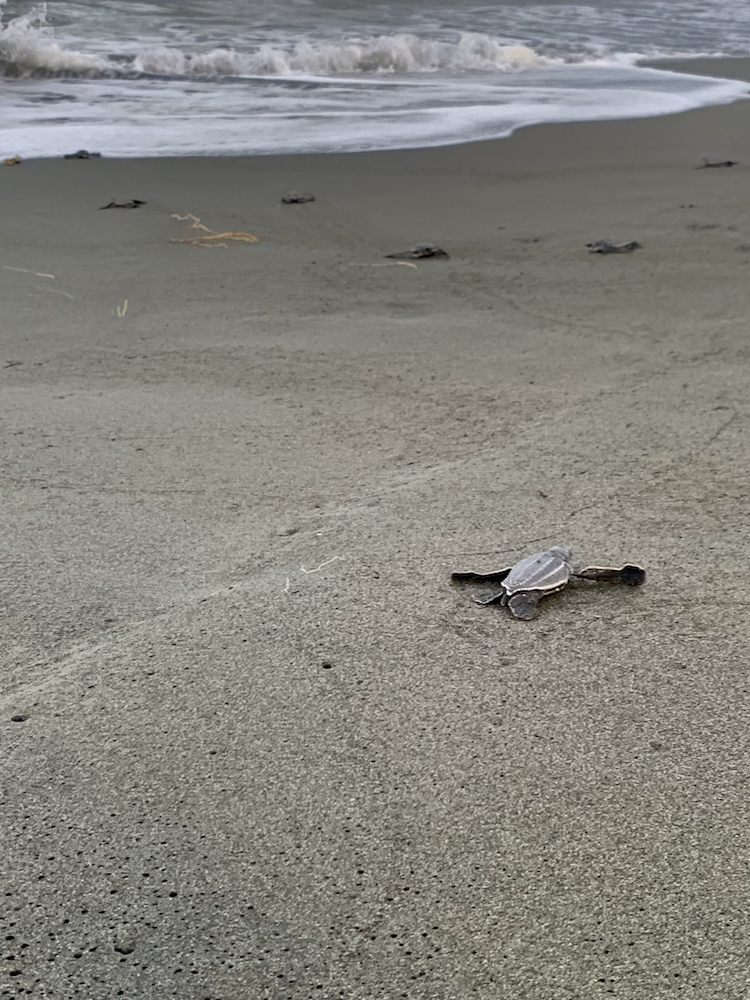 Rokeach: "In a lot of ways, I felt like one of those baby turtles, finally being set free." 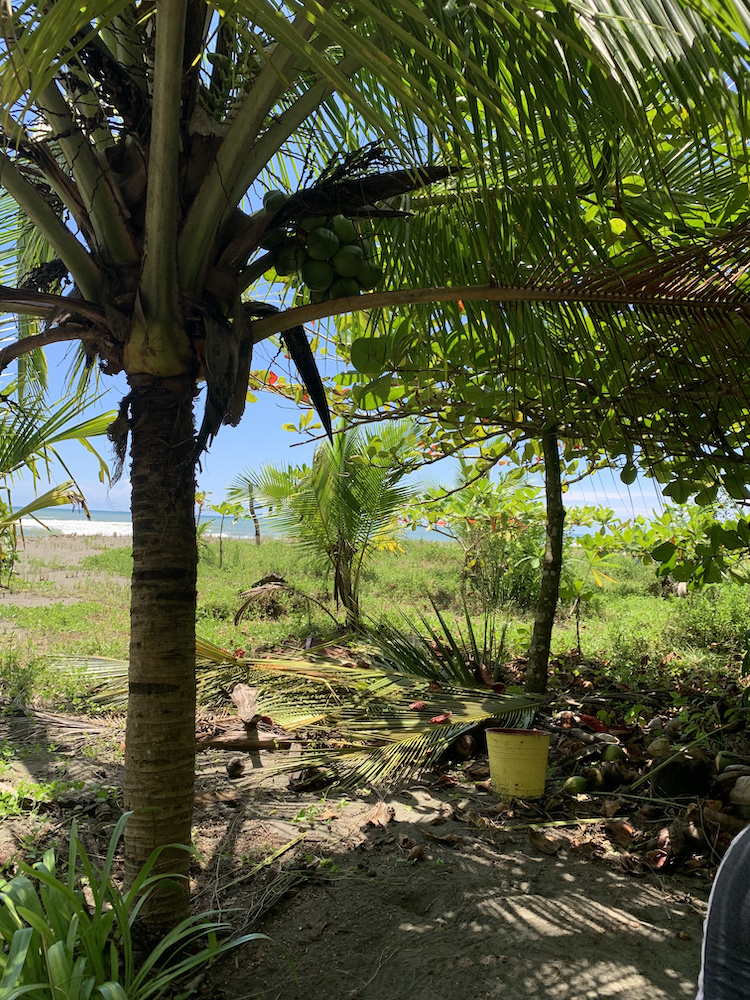 The biodiversity of Costa Rica, varied yet fragile, teaches us about the interconnectedness of all things: not only of wildlife, but how our own actions can influence entire ecosystems.

In my dreams, I’m often back on that beach, overwhelmed with gratitude for my experience. The knowledge of the wildlife—the interconnectedness of the ecosystem. The chance to be immersed in tropical wilderness, to learn from the local people, and to feel their welcome. The time spent with my instructors and Global Glimpse leaders, who shared wisdom I’ll always hold dear. The understanding that, through recognizing our reliance on the earth and on each other, we must practice sustainable, mindful living. The opportunity to travel, and to be a part of something greater.