How to Spend a Long Weekend in Galway, Ireland

The best places to stay, eat, drink, and have fun in Galway, Ireland—2020’s European Capital of Culture.

Often referred to as the “Cultural Heart of Ireland,” it’s no surprise that Galway was voted the European Capital of Culture this year, making Galway even more of a must-visit destination in Ireland. An esteemed accolade which recognizes a city with cultural richness and diversity, the award was conceived in 1985 by the then Greek Minister of Culture in an effort to highlight regions in Europe with vibrant cultural pulses that were perhaps under-the-radar.

The city will be teeming with events all year long, including a lecture by Margaret Atwood on International Women’s Day, various art installations, and an oyster festival at the end of September.

Galway is also known for its location along the Wild Atlantic Way, one of the most scenic driving routes you will ever encounter. The epic landscape was a mystical backdrop in films such as Harry Potter, The Princess Bride, and Star Wars. If all of that isn’t enough, its rich cultural heritage, weaving cobblestoned streets, vibrant pub scene, and prominence as a rising culinary destination will be sure to win you over. 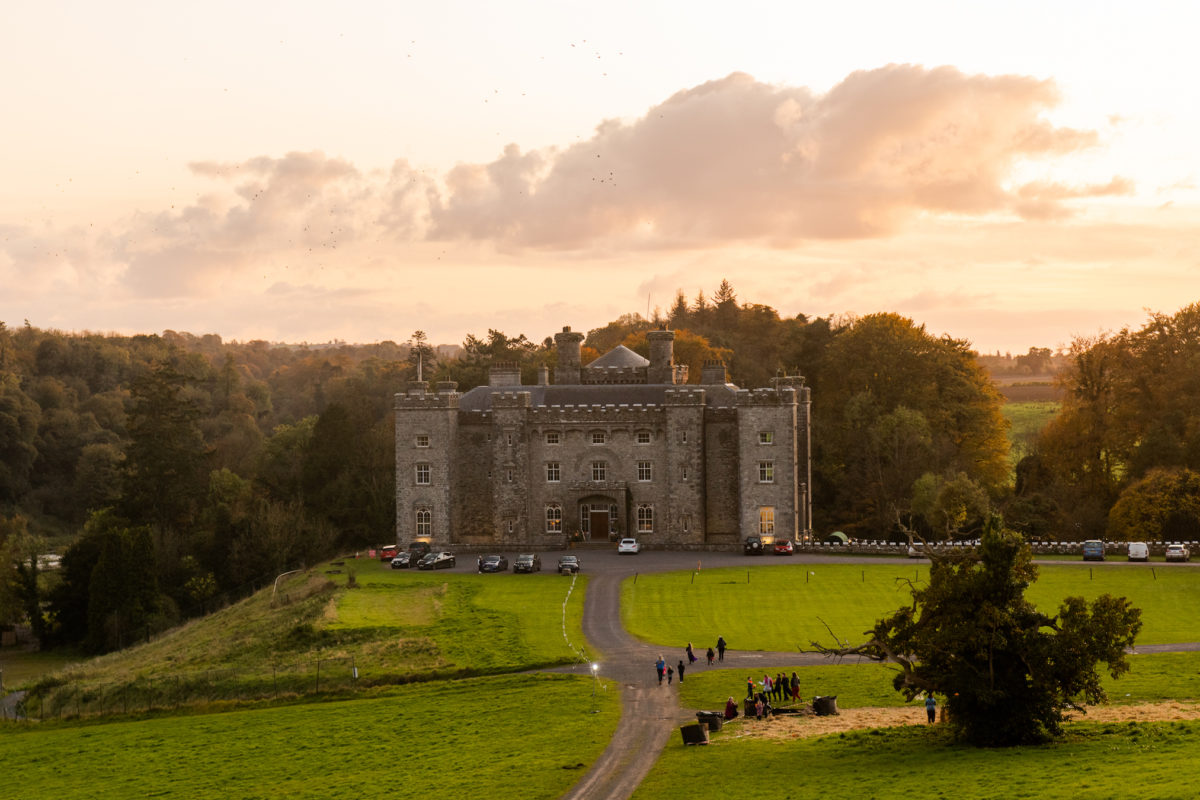 Where to Stay in Galway

Just two miles from Galway city sits Glenlo Abbey Hotel, a 138-acre, five-star manor that has been hosting guests since it opened in 1740. In the colder months, enjoy high tea by their myriad of fireplaces, and in the warmer ones, peruse the beautifully preserved grounds or play golf on their renowned course.

Located smack dab in the buzzing Eyre Square in Galway’s city center, this hotel is a short walk from pubs, museums, restaurants, and bars. Formerly known as the Hotel Meyrick, the Victorian-era structure maintains its traditional charm with a contemporary twist. Start your day in their sun-drenched dining room and end it at one of the lobby bars before heading to their roof deck to enjoy the outside jacuzzi. 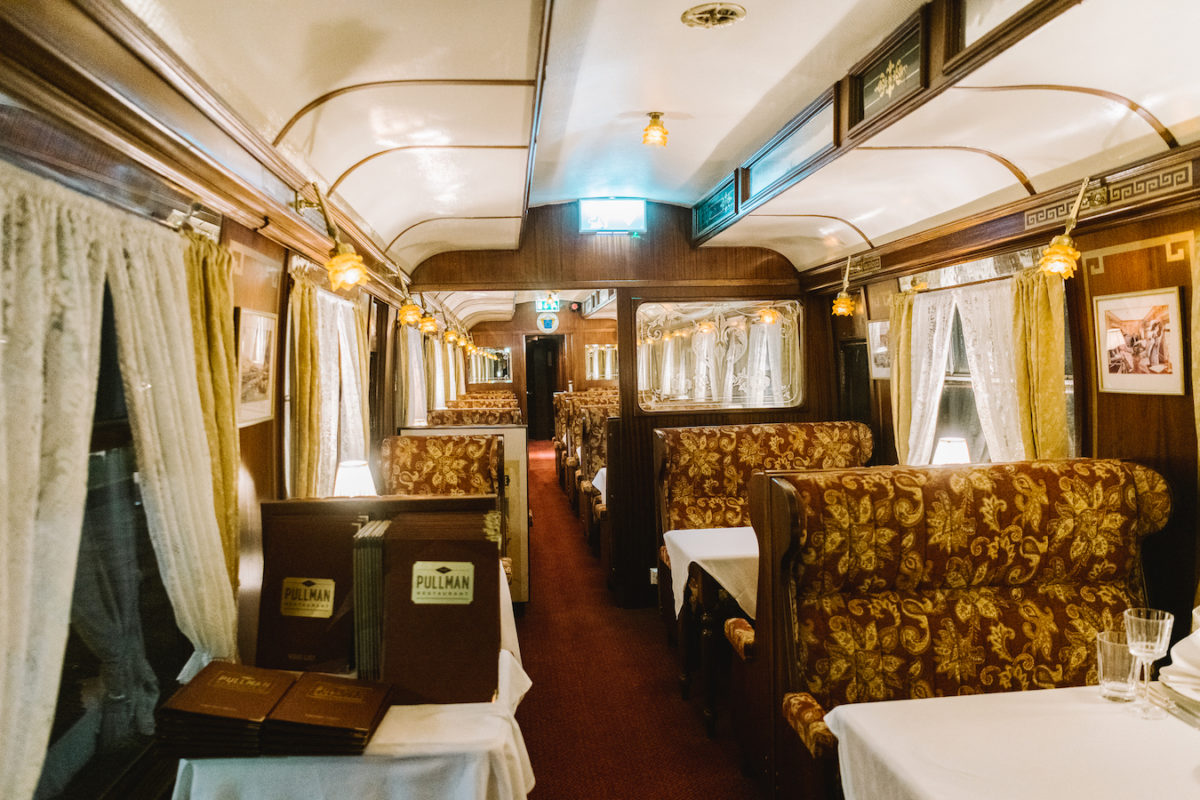 Pullman Restaurant sits inside a converted train from the 1920s.

Where to Eat in Galway

Have you ever wondered what it would be like to dine aboard the Orient Express? Make a dinner reservation at the Pullman Restaurant and put your curiosity to rest. On the grounds of the Glenlo Abbey Hotel, this original Pullman train-turned-fine dining experience is identical to when it was built in 1927. Former passengers include Sir Laurence Olivier and Sir Winston Churchill, the latter of whom used the train privately throughout World War II. In 1974, the train starred in Sidney Lumet’s adaptation of Murder on the Orient Express, starring Lauren Bacall, Sean Connery, and Vanessa Redgrave. One of the most memorable dining experiences you’ll have in Galway, be sure to try the asparagus with chamomile and pineapple weed along with the Castlemine Lamb with tempura kelp.

The seafoam-colored Michelin-star restaurant is known for its 16-course tasting menu, featuring delicate and inventive dishes like oysters with arrow grass, carrot, elderflower and hock, and meadowsweet rosehip for dessert. While their menu is constantly changing, their food preparation techniques are not; Chef JP McMahon has built a reputation for his traditional cooking and preservation methods, such as pickling, smoking, curing, and fermenting, for which the restaurant has become well known. 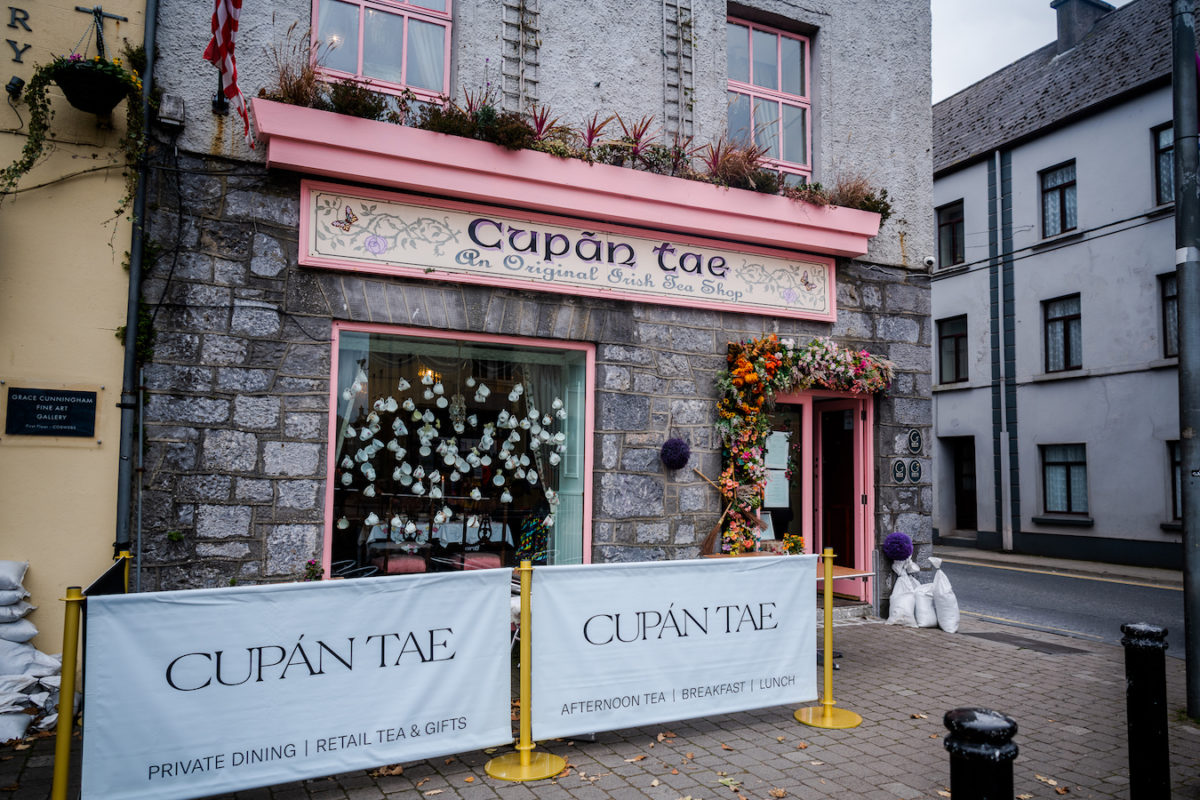 Always wanted to have high tea? Cupán Tae is the place to do it in Galway. 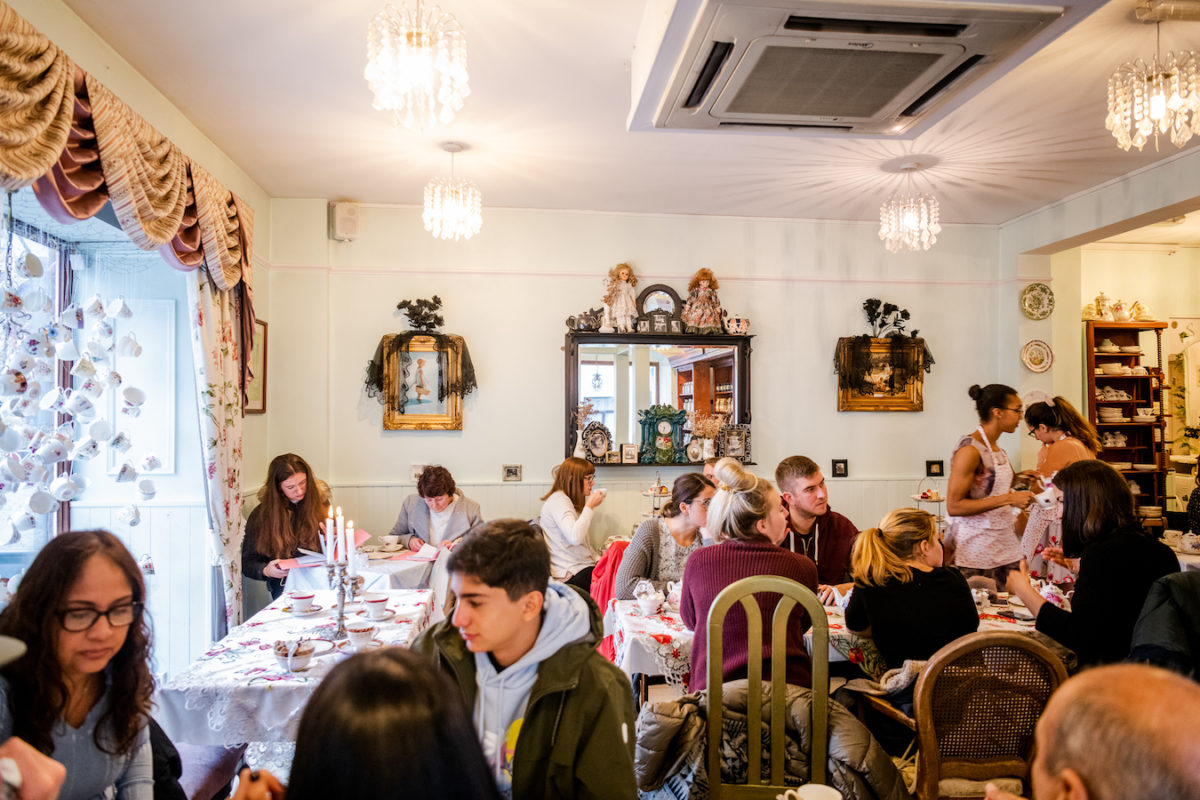 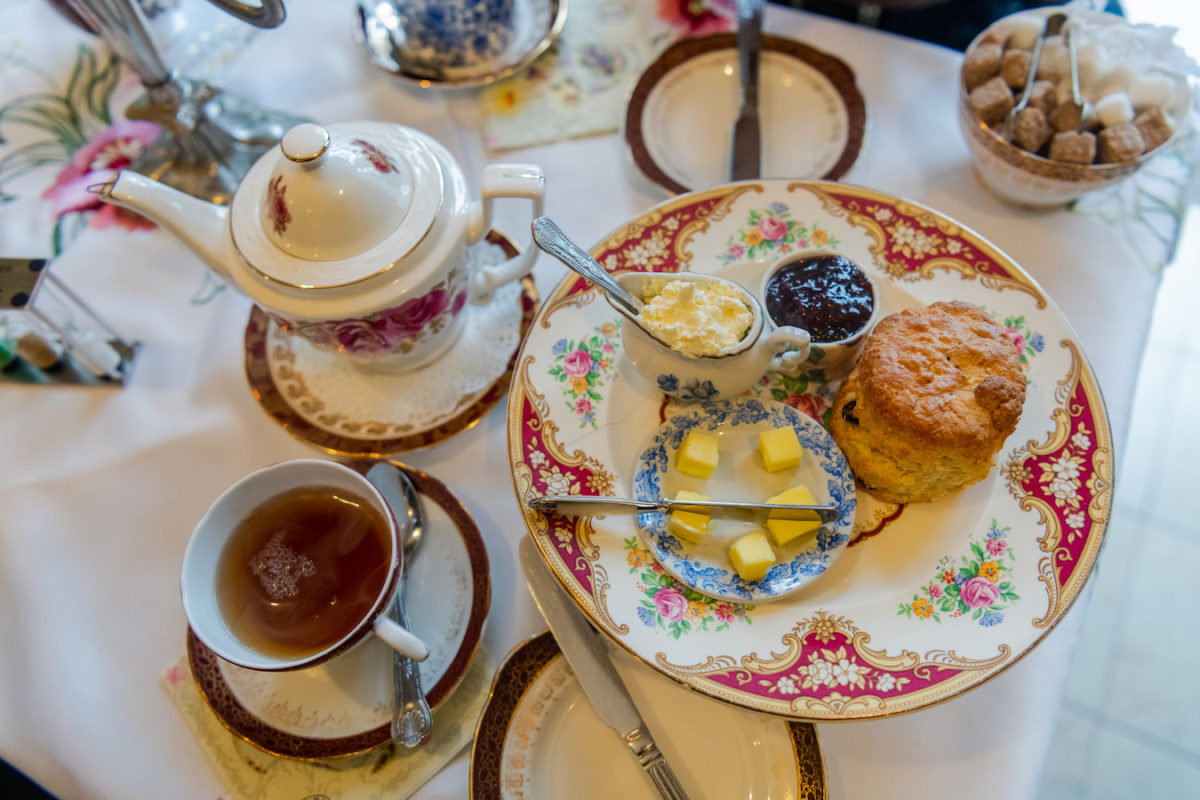 Try their delicious breakfasts and lunches alongside unique strains of tea, such as truffle or popcorn caramel candy.

This cozy, internationally-acclaimed tea parlor is right out of a fairy tale and a must-visit for lunch or high tea. They pride themselves on their mouth-watering homemade scones baked each morning, tea sandwiches, buttermilk pancakes, and fresh soups. The experience is accompanied by an extensive and uniquely flavored tea offering (truffle tea anyone?), all served on elaborate and colorful china sets.

With its sparse open kitchen, carefully crafted courses, and raw wood interior, it’s no wonder this design standout was voted the ‘Best Restaurant in Ireland’ last year. Using exclusively local fare, the prix-fixe menu makes use of seasonal ingredients unique to Ireland, all paired with a curated list of biodynamic wines. If you still have room after the burnt honey, whiskey, and raspberry dessert, make sure to order their cheese course. While Loam is known for its meat dishes, they also offer a vegan/vegetarian tasting, which you can secure by calling ahead. 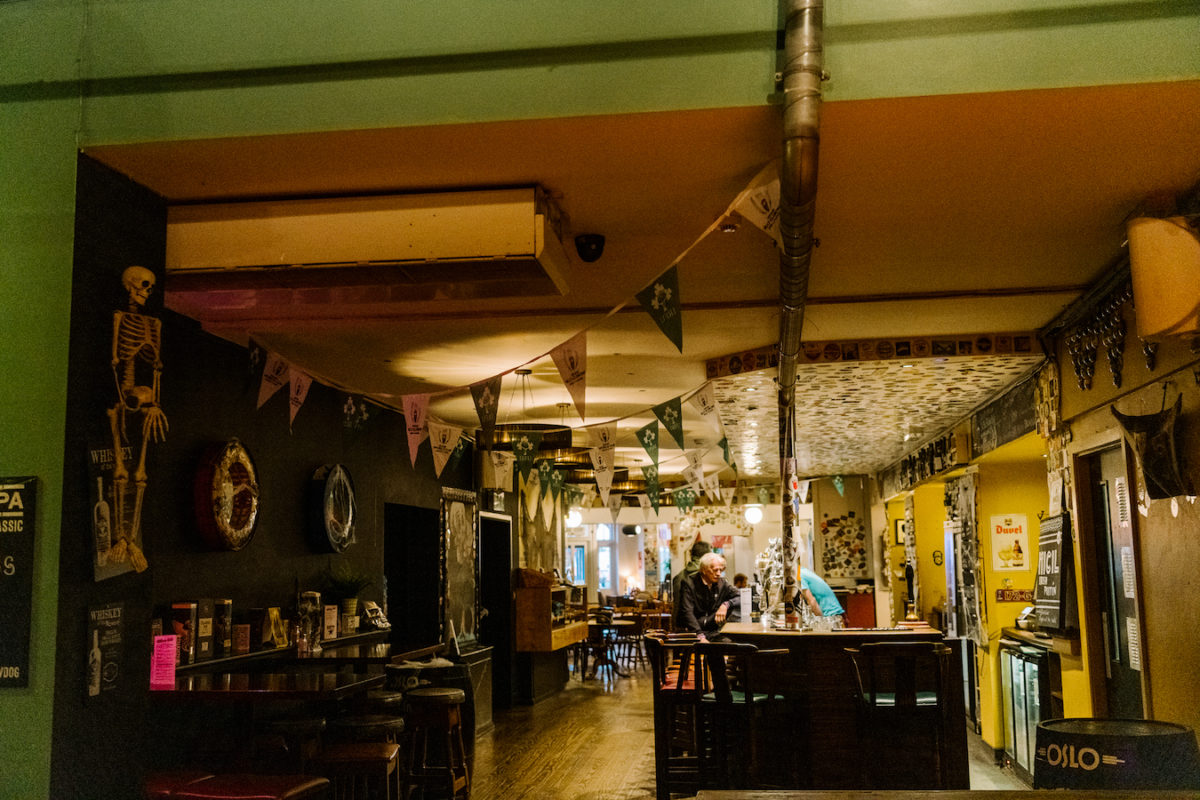 Situated in Salt Hill, Oslo is Galway's only microbrewery. 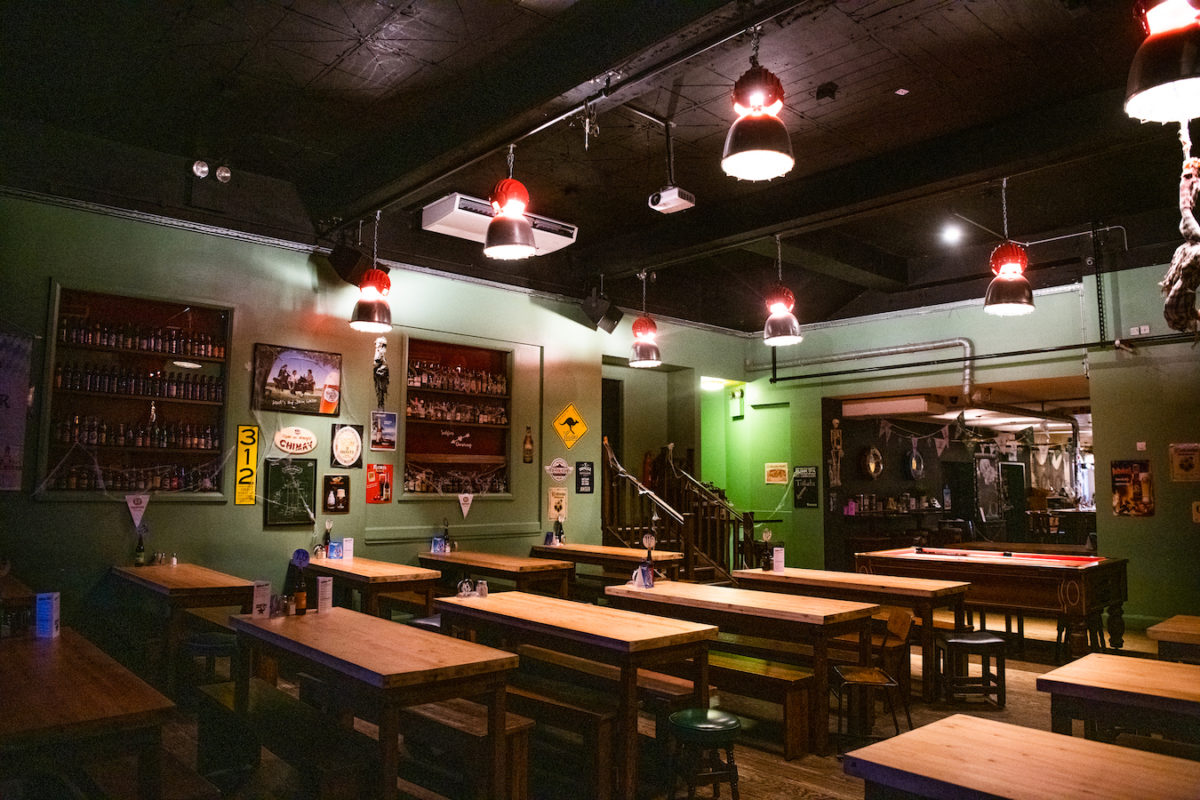 Every pint comes fresh: There are nine brews on tap, all of them less than ten days old.

Where to Drink in Galway

Located in Salthill, Ireland’s most sought-after seaside fishing town, you’ll find Oslo, Galway’s only microbrewery. The bar offers nine unique beers on tap, all of which are less than ten days old and brewed right on the premises. Sit by the roaring fireplace and make sure to try their Bay Ale and Stormy Porter. If you’re in need of a bite, their hearty lentil soup will do the trick, and be sure to challenge your date to a game of pool in the back billiards room.

Tigh Neachtain is one of Galway’s most beloved pubs for locals and tourists alike. You’ll feel utterly transported as you weave through a wooden, cavernous labyrinth of cozy side rooms and cubby holes. Coat your stomach with the pub’s famous clam chowder while having a friendly chat with the bartenders. Make sure to peruse the stack of books and magazines on offer and cozy up by one of their fireplaces to enjoy the live music. 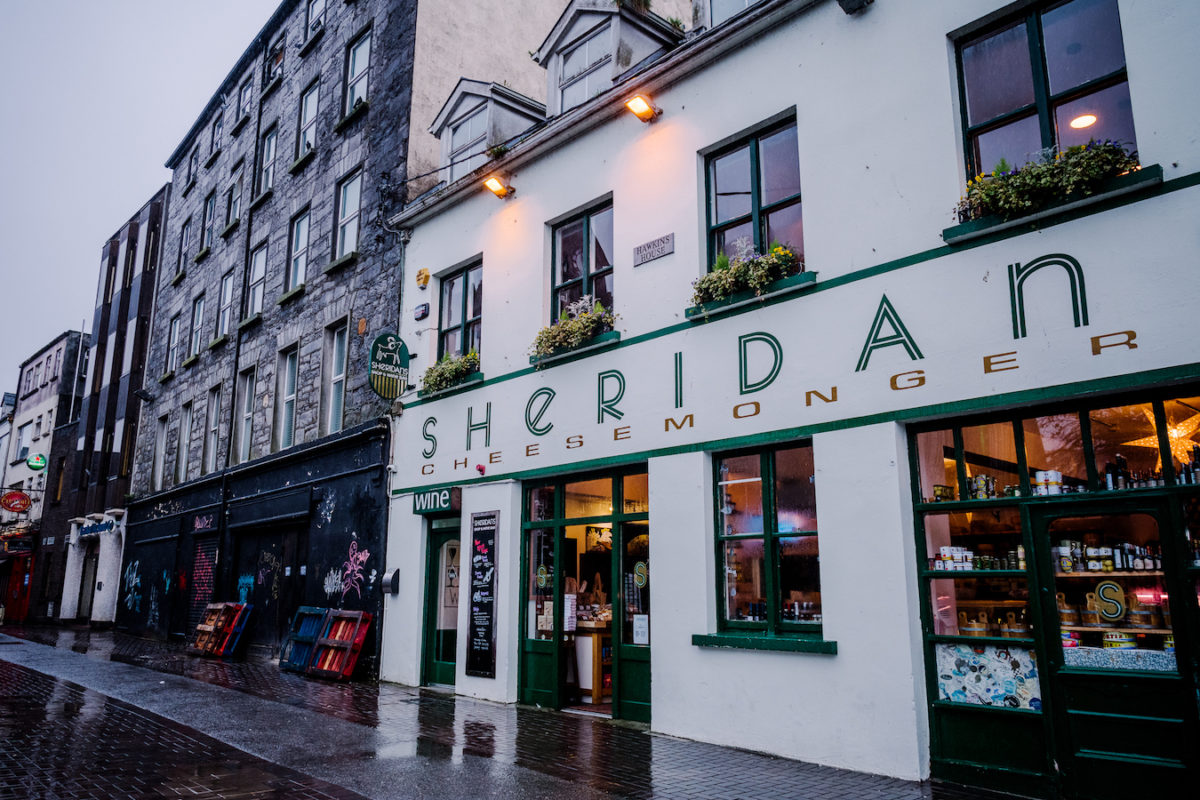 Sheridan's is the largest cheese shop in Galway. 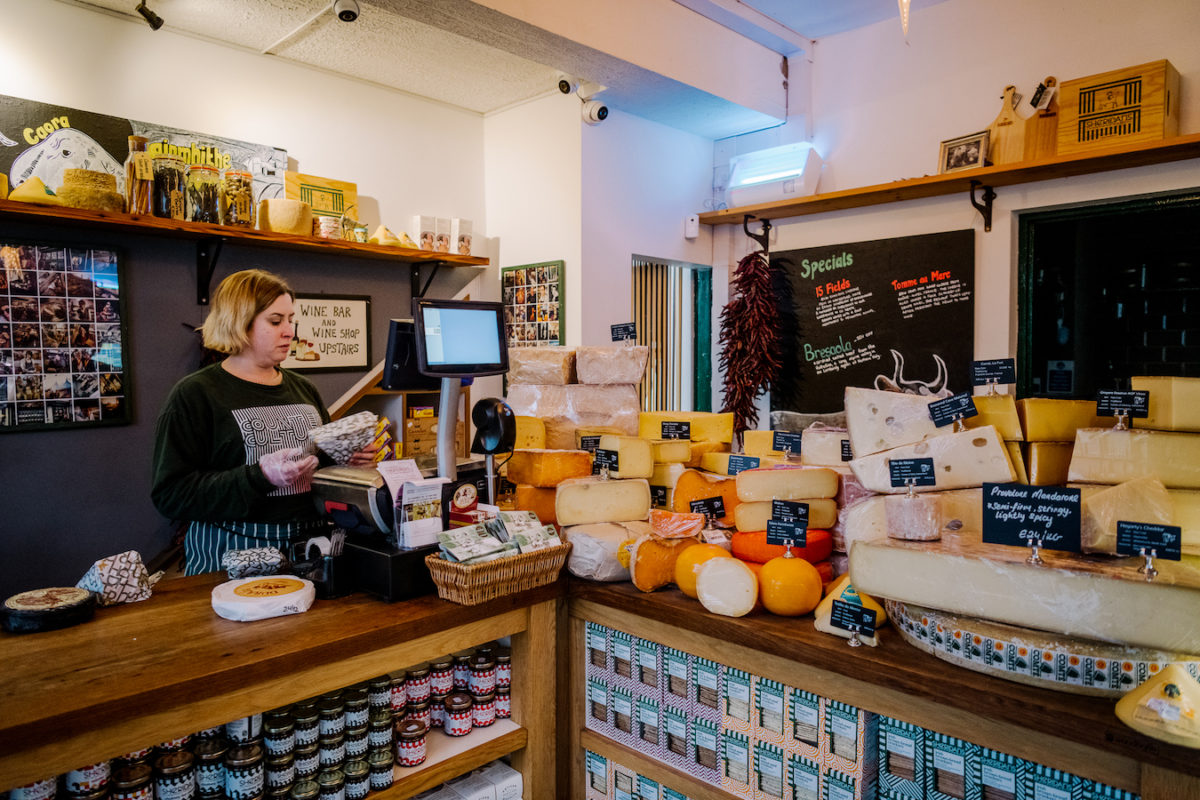 Stop in to sample dozens of cheeses, then head next door for a bit of wine to top it all off.

Tucked away above Sheridan’s Cheese Shop (the largest cheese shop in Galway) sits their quaint wooden paneled wine bar. Their wines by the glass rotate daily, which is reason enough to visit more than once during your trip. Stop by for an afternoon or early evening aperitivo, grab a spot by the window, and take in the views of St. Nicholas Square while enjoying their famous cheese plate, a curated selection of both Irish and imported delicacies.

Occupying the ground floor of an old prairie house in Salthill, you’ll find the neighborhood’s coziest wine, jazz, and tapas bar. The staff will assist you in pairing their selection of local and imported wine with their scrumptious small plates. Meat lovers should order their lamb sliders, and vegetarians can select from their homemade crostini, like artichoke, caramelized onion, cherry tomato, and goat cheese. 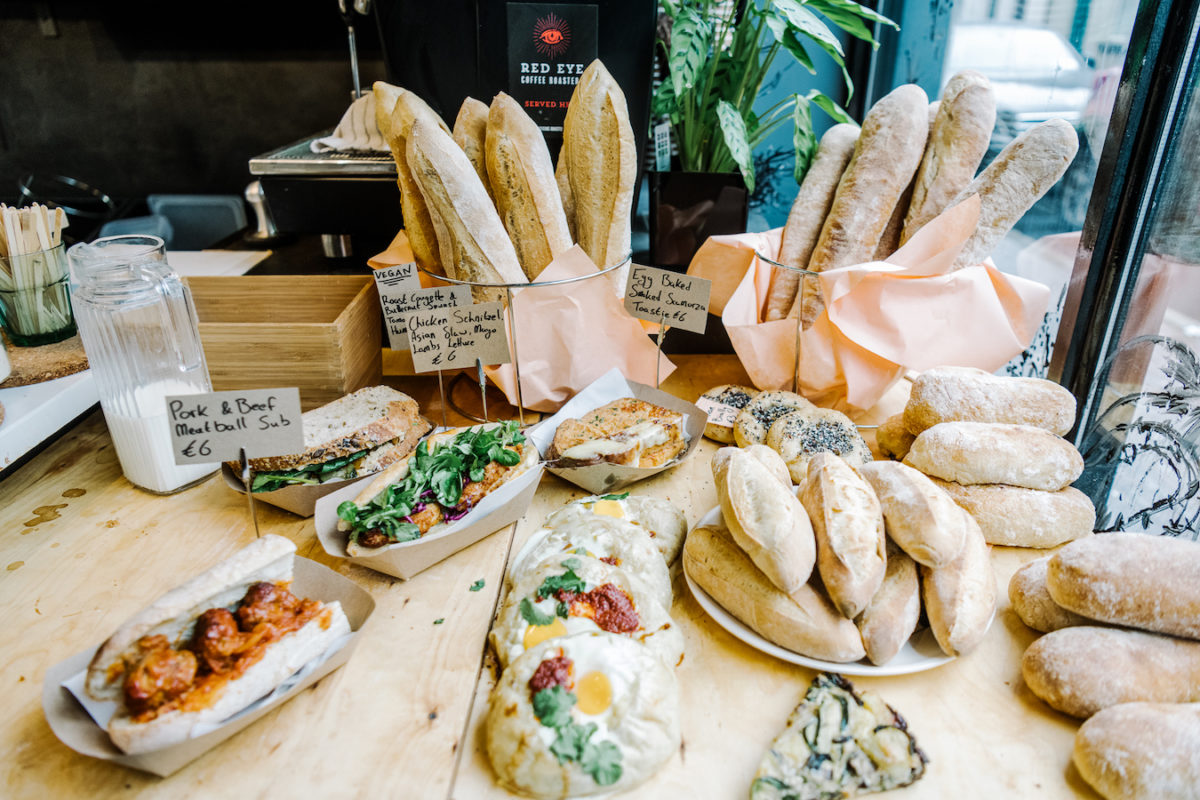 Come hungry: Galway Food Tours invites you to sample from the best of the city's restaurants and bars. 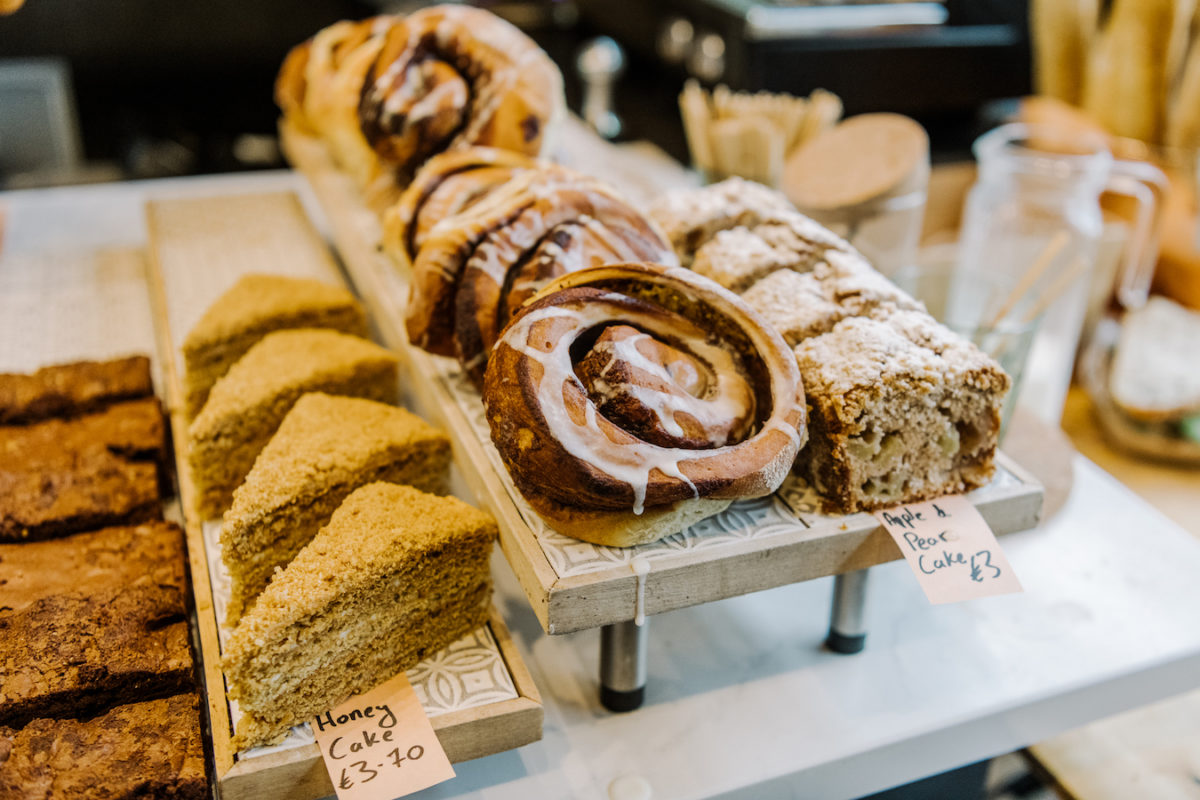 Each stop along the food tour will give you a look into Ireland's food culture, whether through local ingredients or Irish specialties. 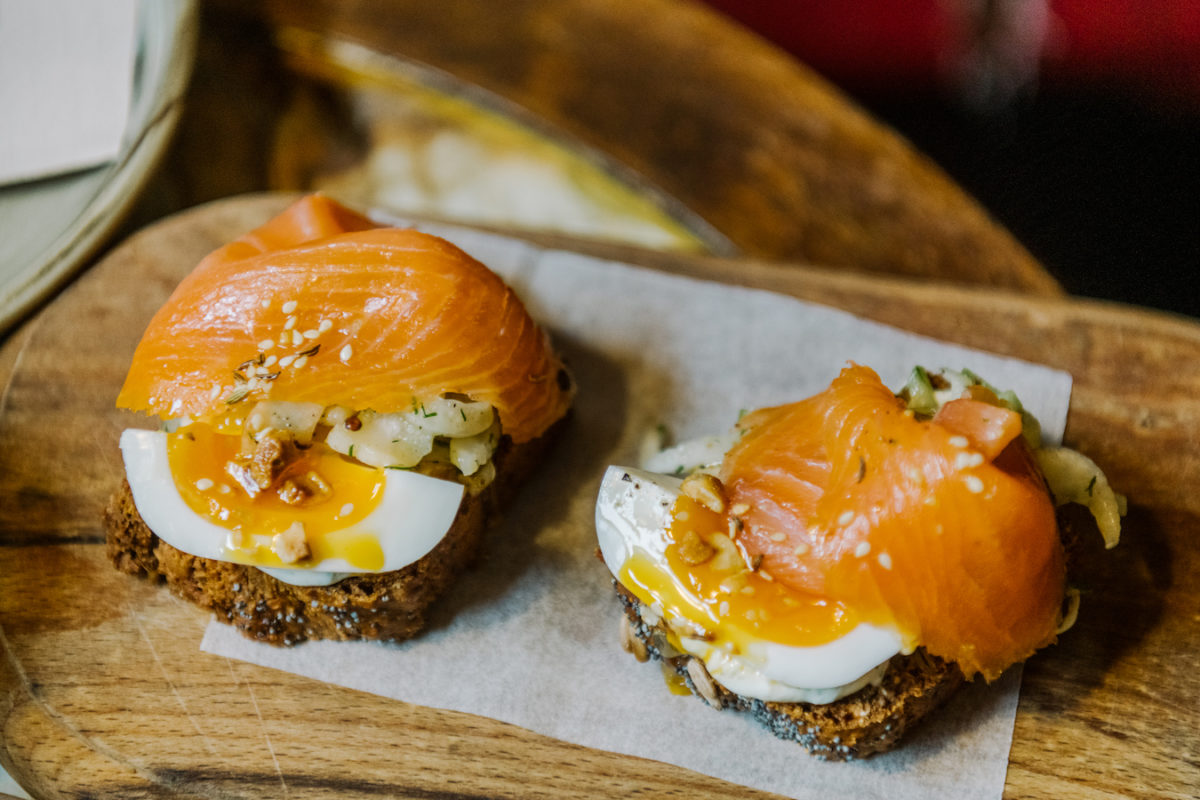 Along the way, you'll try everything from fresh sushi to bagel and lox.

What to Do in Galway

Founded by a duo of female food enthusiasts, this tour will show you everything you need to know about Galway’s culinary scene. Make sure to arrive famished because you will want to eat it all. Your tour will start in a cozy booth at Tigh Neachtain, where your guide will bring you a Guinness and a bevy of samples of the local cuisine, from sushi to bagel and lox to local cheeses. You will then begin the walking tour, where you will taste the best of Galway. Sample onion-filled pastries at Marmalade Bakery, cleanse your palette with local Irish roasts at Little Lane Coffee, sample moonshine at McCambridge’s of Galway, and conclude your tour at Hazel Mountain Chocolate, a bean-to-bar chocolate store that offers the best hot cocoa you’ll ever try. 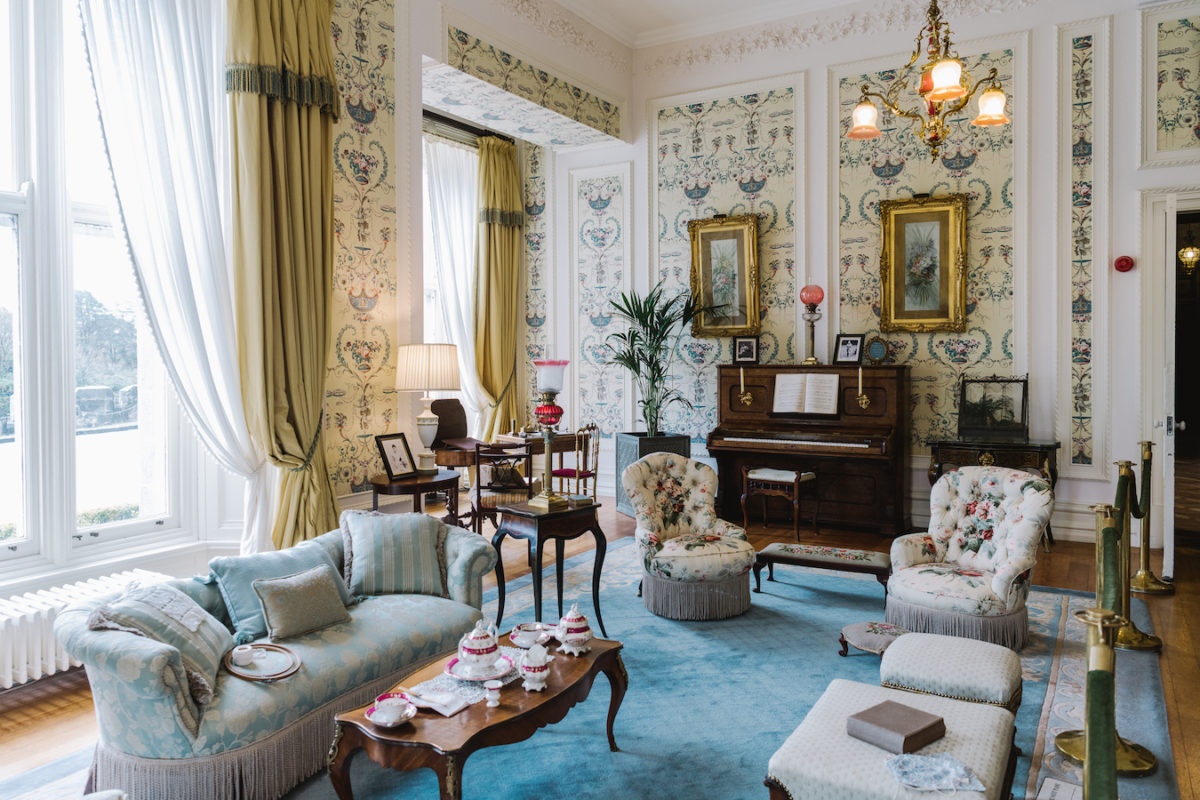 Kylemore Abbey was built by one of the wealthiest men in England as a private home in 1867.

The journey along the Wild Atlantic Way to Kylemore Abbey is as beautiful as the Abbey itself. Make sure to leave time to walk around the picturesque villages and sprawling fields you’ll encounter on the way. Built by one of the wealthiest men in England as a private home in 1867, arriving at the Abbey is like stepping back in time, as the exterior is virtually unchanged. In 1921, a group of nuns bought the mansion and turned it into an elite all-girls boarding school. While it closed in 2010 and was converted into a digitally interactive museum, many of the tour guides attended the school as students and can regale you with stories. 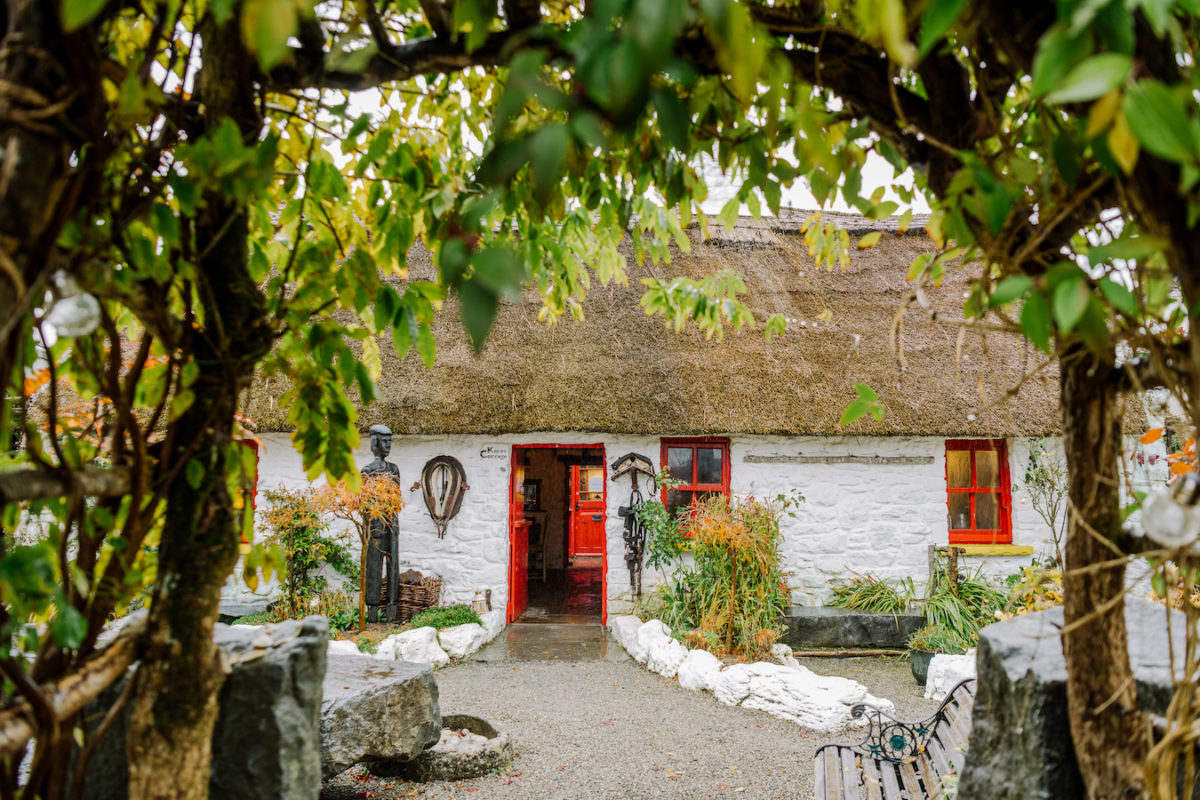 Once a quaint fishing village, Claddagh is now Galway's most expensive neighborhood.

Located outside of Galway’s city walls is Claddagh Village. Founded in the nineteenth century, it is one of the oldest fishing villages in Ireland and remains the most untouched and traditional area of Galway. Known for their thatched-roof houses and cozy interiors, the Claddagh area was purposefully destroyed in 1934 after a deadly tuberculosis outbreak. However, a few cottages were rebuilt to keep the tradition alive, such as Katie’s Claddagh Cottage Heritage Shop, an exact replica of a former Claddagh house. Enjoy tea and biscuits as you peruse local crafts such as Gaelic stone carvings, locally mined green marble works, and Celtic goddess carvings. The best way to see this village is by booking through Galway Bay Tours.

This newly built arthouse cinema adds yet another level of culture to Galway. Duck in during a rainy day (rest assured, you will have one) and have your choice of three films in the concrete “tower house” located in the city’s Latin Quarter. Despite its austere design and concrete exterior, each theater offers plush chairs and elaborate red velvet drapery from floor to ceiling. The project, which took fourteen years to complete, also offers a contemporary eatery and lobby bar on the ground floor. 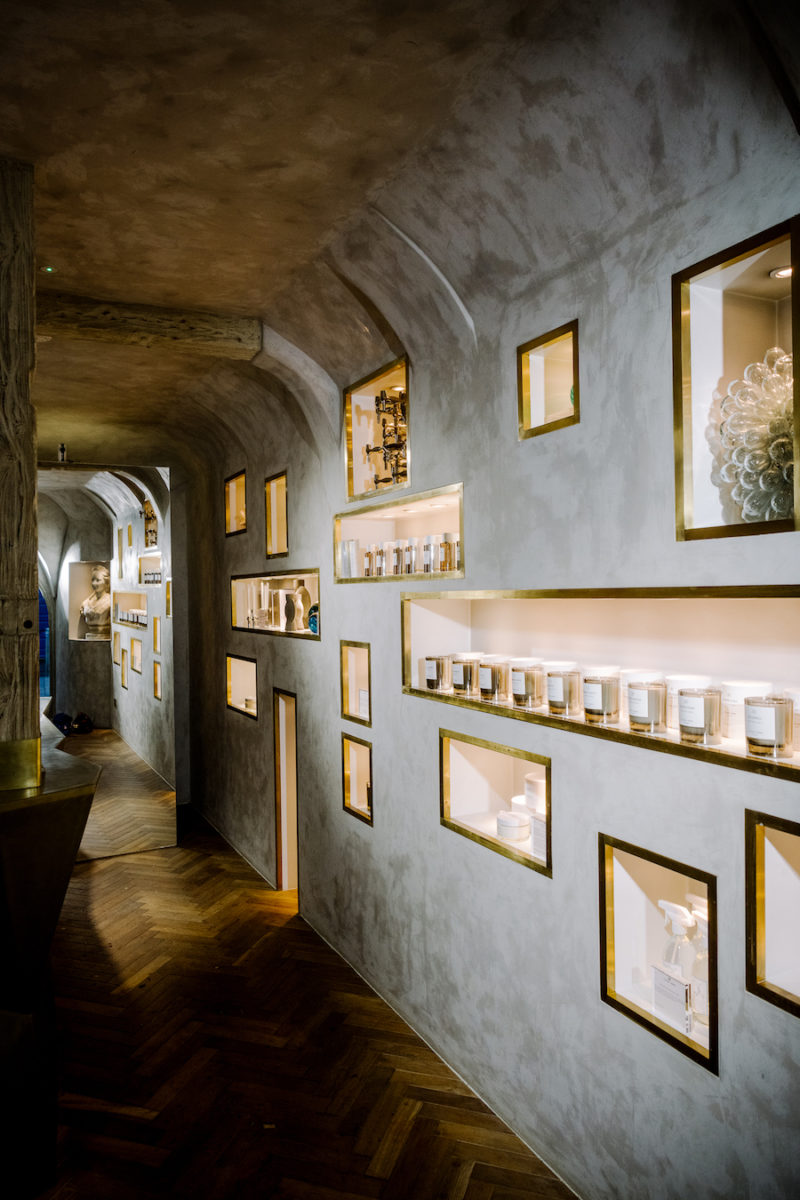 Each scent in Cloon Keen is inspired by an element of Irish culture.

Where to Shop in Galway

Cloon Keen Perfume shop is Galway’s answer to Le Labo. The mirrored store features rich perfumes and candles, each scent modeled after Irish culture and more memorable than the last. Antique Library is their bestseller, a smell inspired by a particular reading room inside the library of Dublin’s lauded Trinity College. Or Mountain Flower, an ode to Nora Barnacle, the Galwegian wife of James Joyce and the inspiration for a character in Joyce’s Ulysses.

Part design shop, part artisanal coffee shop, Coffeewerk + Press is evidence that the bean scene in Galway is on the rise. With its minimalist Scandinavian design, the coffee shop is a quaint hideaway from the hustle and bustle of Quay Street. Order a flat white on their first floor, then head upstairs to their exceptionally curated design shop to admire their array of goods, from wool blankets to eccentric lamps, canteens, and design books.