Fly By Jing founder Jing Gao shares how her road to CEO-dom was directly linked to her identity, how 2020 brought her closer to her heritage, and a few of her favorite spots in her hometown, Chengdu, China.

Born in Chengdu, raised abroad in Europe and Canada, and currently based in LA, Jing Gao is the mastermind behind the hugely successful hot sauce brand, Fly By Jing. The venture began as an underground dinner series before debuting commercially with an impressive lineup of sauces in 2018. Since then, the brand’s signature Sichuan Chili Crisp sauce has skyrocketed in popularity, becoming a pantry staple for quarantine home cooks nationwide.

This is the story Jing Gao: one woman who, after 25 years of assimilation and making herself smaller to “fit in,” rediscovered herself and carved out a uniquely Jing-shaped space in her industry. Here, we spoke to Gao about identity, reclaiming her given name, and the evolution of her brand. 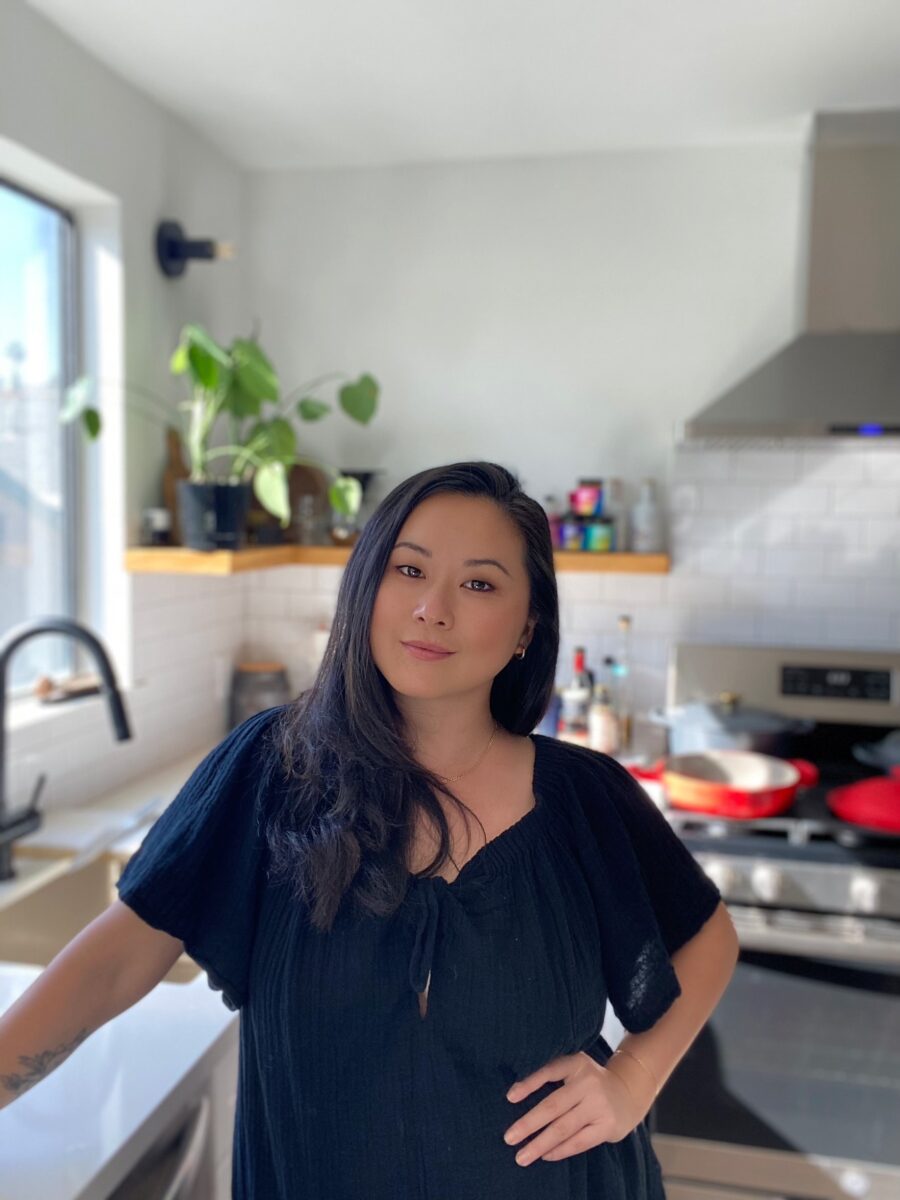 “I’m not the first person to make chili crisp, but the recipe is 100% my expression of the sauce.”

Could you briefly share what led you to creating Fly By Jing? What did you feel like was missing in the space, and what did you want to accomplish?

Fly By Jing has gone through a few iterations. It started as an underground dinner series, where I’d cook all over the world and introduce diners to the layers of flavor in Sichuan cuisine. What’s now the Sichuan Chili Crisp sauce was a recipe I developed as a base for many of the dishes I’d cook. I realized I wanted to make it as a retail food product because it became a conversation starter with diners, and I saw an opportunity to produce it in my hometown of Chengdu. I’m not the first person to make chili crisp, but the recipe is 100% my expression of the sauce, and Fly By Jing’s version is the first all-natural chili crisp made in China and I think that’s a pretty big deal.

Backing up a little bit, what would you say was the turning point for you, in discovering what you wanted to do with your career?

I was born in Chengdu, but spent much of my young life moving every year. Returning to Chengdu as a young adult and experiencing how complex and nuanced the flavors of Sichuan cuisine are — and realizing how little the Western world knows about it! — made me want to really dive in to this 5,000 year-old tradition and learn all that I could. Food also became a way to connect with my family in Chengdu, who I didn’t know very well until I returned. So food played a dual role in my rediscovery of my personal roots, as well as the roots of Sichuan cuisine. And then, I felt really compelled to share everything I discovered, and still do as I keep learning. 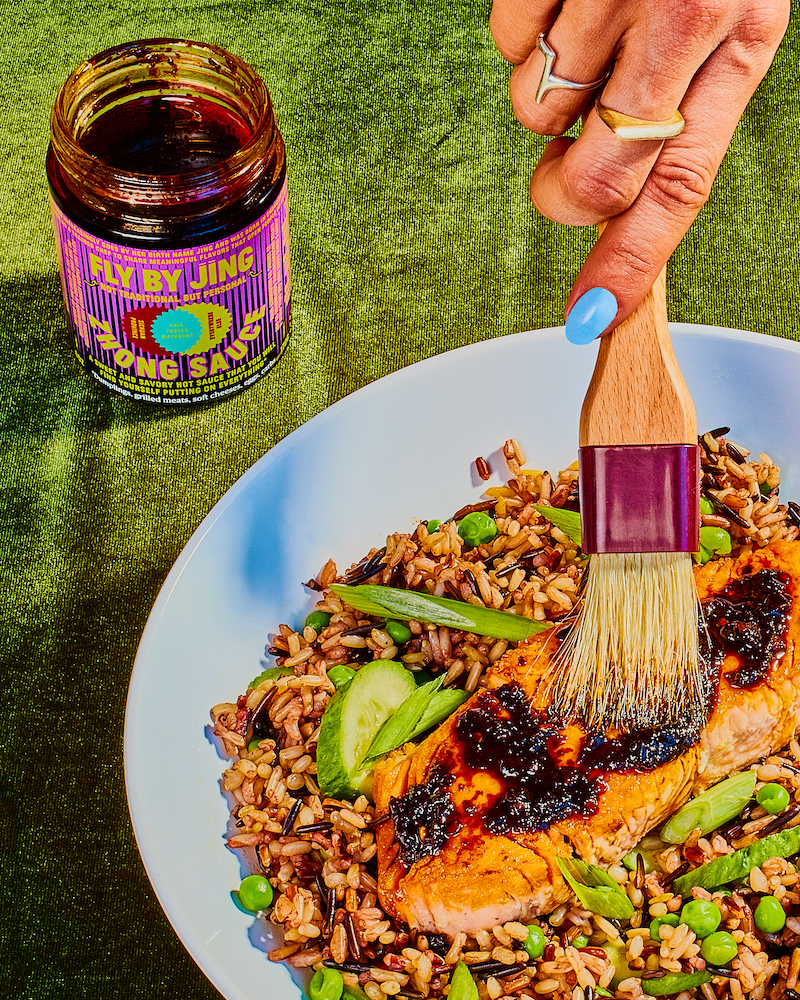 What sparked your desire to go back to Chengdu? Can you talk about what inspired you to engage more deeply with your heritage?

I visited family in Chengdu often when I was growing up, and when I was old enough to travel on my own, I felt the pull to explore where I came from. When I got to China, it was such a revelation: I was both similar to, and very different from, the people there. Food became a universal language for me to relate to people, including my family.

Tell us more about the decision to change your name back to your given name, Jing. What led you to that decision and what does the name change mean to you?

I changed my name to Jenny when I was growing up in Europe, because the kids there couldn’t pronounce “Jing.” As I started to dive deeper into the food of Chengdu and my heritage, I realized that I’d been making myself smaller my whole life to try to fit into Western society. And as I started to get more vocal about the flavors that make this food so special, I started to get more vocal about my own heritage as well. And a couple of years into Fly By Jing, I made the decision to step forward more as the voice and face of the brand — because it is my own highly personal expression of Sichuan cuisine, and no one else’s. Reclaiming my name was a natural step in this journey of stepping into my own power. And this is why Fly By Jing is so personal — it’s not just a company, it’s totally entwined with my story.

‘Don’t change who you are or try to minimize where you come from for the sake of “blending in.”‘

From Chapati to Cheese Dip: Food as a Source of Identity for a Singaporean Immigrant in Texas → 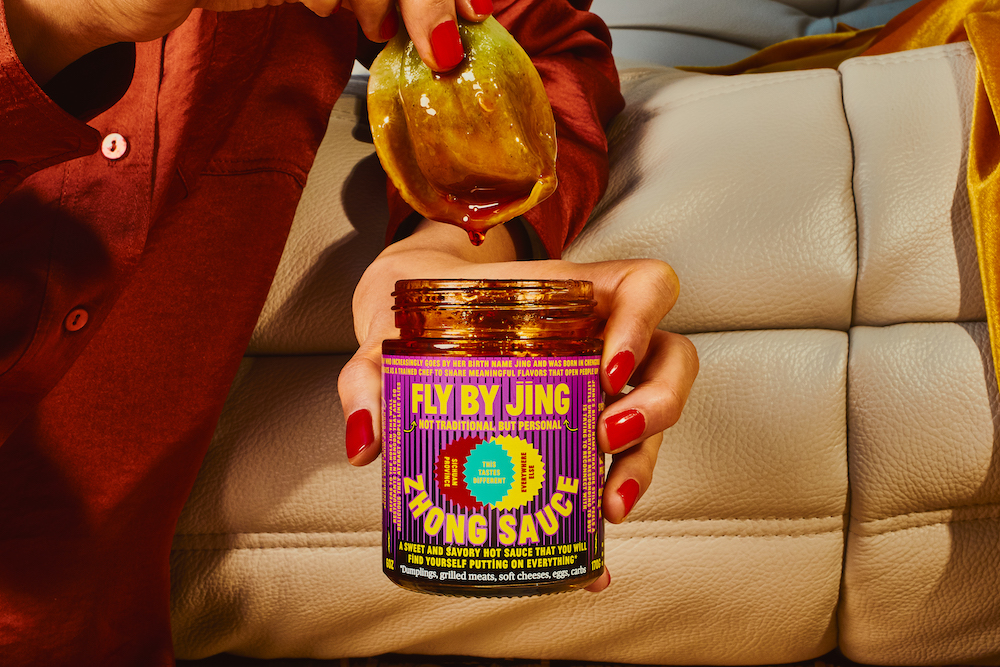 Zhong sauce used for dipping, directly from the container. Go ahead, we won't judge.

What would you tell your past self from 10 years ago if you could speak to her now?

Take up space! Don’t change who you are or try to minimize where you come from for the sake of “blending in.”

How did the year 2020 and COVID-19 change things for you, personally and professionally?

For Fly By Jing, the pandemic really amplified our business as more people were cooking from home and looking for new ways to add flavor to their favorite dishes (a strange positive in a year full of negatives). Sam Sifton of the New York Times wrote a piece about how home cooking needed condiments and featured our Sichuan Chili Crisp — and suddenly chili crisp seemed like it was everywhere, both in the media and on everyone’s plates. Personally, it was during quarantine that I found the space to reconnect with myself and realize the freedom and clarity that comes with detaching myself from the expectations and gaze of others. I decided to shed the protective layers I carried with me for decades and feel comfortable just being, which allowed me to step into my truth and finally reclaim my birth name.

Are you looking forward to traveling anywhere specific for leisure, once things become more stable?

I definitely want to get back to Chengdu as soon as I can, for both production and supply chain purposes but also just to visit family and eat. A close second is Oaxaca, Mexico.

7 Pantry Staples to Expand Your Palate at Home →

I’m curious. What’s the unlikeliest but most delicious food to put Sichuan Chili Crisp on? I’ve seen it on ice cream and I can’t wait to try that.

Ice cream and chili crisp has, indeed, become a thing! Lately I’ve been playing with our condiments and spices in cocktails. The oil from the Sichuan Chili Crisp is great for making a Spicy Paloma.

Lastly, what are some of your must-visit foodie spots in Chengdu?