In a male-dominated railway industry, our latest travel inspiration comes from these pioneering female train drivers, making strides and going viral on Instagram in the process.

Most mornings, 31-year-old Saskia Hjaltason gets up at the crack of dawn and goes to the railroad yard to get her Lint 41 railcar ready for the day ahead. A train driver for the Danish Lokaltog railway line, Hjaltason loves every aspect of her job: the views out her window as she drives through the islands that make up Copenhagen and toward the beaches of North Zealand; the sense of staying in motion; and the knowledge that she is responsible for operating the 61-ton machine that gets hundreds of travelers to and from work every single day.

“I really like nature and especially like that you can see the four seasons,” says Hjaltason, who was a train driver in the Netherlands before moving to Denmark. “You can drive in the spring and see flowers. When there’s snow, everything is white and quiet. It is like back in the days when you were in class and you would look out the window and [be told] that you can’t earn your money looking out the window. Actually, you can.”

Train driving has, for generations, been an almost entirely masculine profession. While women have been well-documented in railway administration and telecommunication since the end of the nineteenth century, the once heavily manual work of operating a steam engine meant that driving the train was often relegated to “men’s work.” Both through direct bans and indirect discrimination, train driving has been kept out of reach for even the fittest of women up until very recently — Karen Harrison became the first female train driver in Britain in 1978.

The Local’s Guide to Copenhagen, According to Danish Restaurateur-Hotelier Christian Lytje → 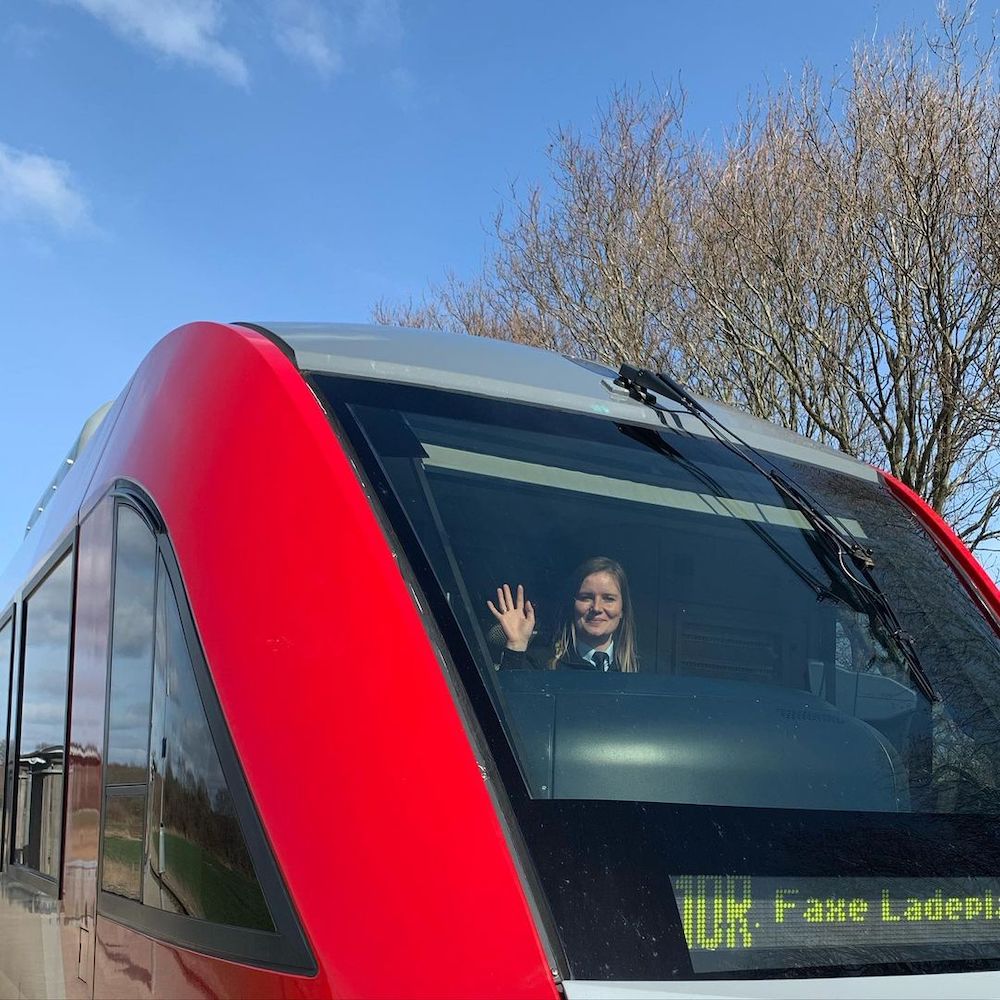 "Hej Hej 🚄🙋🏼‍♀️ #backontrack So happy to be back on the train! Have a nice day☀️" Photo by Saskia Hjaltason.

Women’s rights and global railway systems have evolved greatly in the ensuing four decades—yet the railway industry is still largely male-dominated. In a country whose railway lines stretch across the island’s entire 80,000 square miles, just five percent of the 19,000 train drivers in the United Kingdom in 2019 were women. In the United States, that number was at just under four percent for train engineers and operators in the same year.

“In Holland, I drove trains that were over 300 meters long,” says Hjaltason, who resumed driving in March after emigrating to Denmark to join her husband and become requalified in her new home country. “I would get out of the train and people would look at me like ‘Did that small girl just drive that huge train?’”

For a new generation of women, driving a train has been as much about breaking down gender barriers as about being able to travel and find one’s calling in a beloved profession. While studying tourism at the Inholland University of Applied Sciences, Hjaltason lived right by the railway tracks and decided that finishing a training program for train drivers was more appealing than getting her master’s degree. Having driven on and off since 2014, she finds it is a way to balance her love of travel with being at home at night for her eight-month-old daughter. 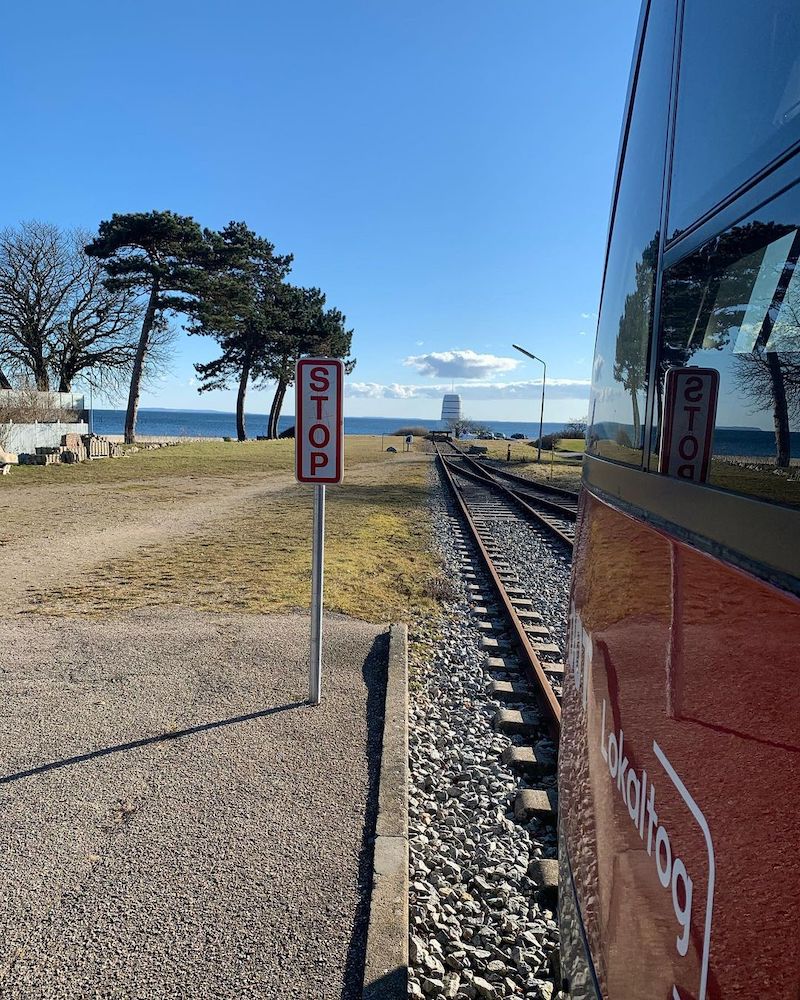 "My new ride 🚅 All the way to the beach😎" Photo by Saskia Hjaltason.

Recent years have seen a number of initiatives to increase the number of female drivers in countries with expansive train networks — the UK, Australia and Canada have all launched such programs to grow its numbers of female train drivers in the next five years. Over the last year in particular during the COVID-19 pandemic, the train industry has given women across the world a chance to stay in motion at a time when others were hunkering down and giving up on long-planned trips to other parts of the world.

Born in the Indian province of Punjab, 28-year-old Arshdeep Kaur moved to Australia in 2012 to complete a Bachelor of Commerce and become an accountant. In February 2020, the world was just starting to grasp the magnitude of the coronavirus pandemic and Kaur was looking for jobs as a teacher. Instead, an advertisement for Sydney Trains caught her eye.

“While I was searching for teaching jobs I came across a train driver’s position and applied for it,” says Kaur, who was also a New South Wales state finalist in the 2019 Miss World Australia beauty pageant. “My dad has a transport business and I have grown up around big trucks so I had a keen interest in the transport industry but never in my wildest dreams had I thought of becoming a train driver.”

Kaur started the trainee program in February 2020 and, by March 2021, became a qualified train driver. She now passes through over 1,600 kilometers (994 miles) of tracks throughout Sydney and the state of New South Wales.

“My favourite sight is driving over the Sydney Harbour Bridge,” Kaur says. “We say it’s a million-dollar view and I feel so lucky and grateful every time I drive over it. My routes take me from the Blue Mountains to the beaches and everywhere in between—and because it is 24/7 shift work, I get to see many beautiful sunrises and sunsets in different locations.”

In Russia, “electric train driver” was recently removed from a list of 456 professions banned for women for being too dangerous or physically demanding. When the new rules came into effect in 2021, 12 women had completed training and joined the Moscow metro as drivers in the country’s capital while dozens of others did the same in other parts of the country’s 6.6 million-square-mile terrain.

22-year-old Sofia Dorofeeva is one of the women who had been waiting for the ban to officially lift on January 1, 2021 so that she could start a job as an assistant train driver for the country’s central railway line, Russian Railways (RZhD). An art school graduate prior to enrolling in courses at Moscow’s College of Railway and Urban Transport, Dorofeeva had been making anime-style drawings of trains, tracks, and railways and posting them on Instagram. Now, she also documents her experiences working in the industry on her account, @d_r_o_f_a.) 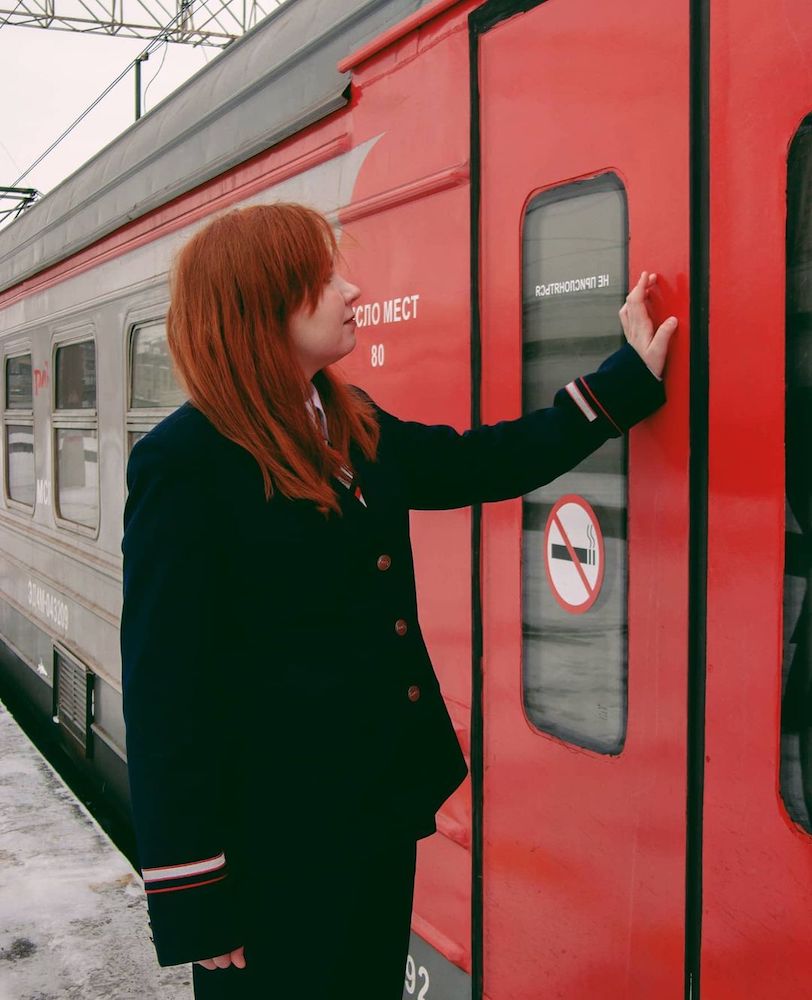 Prior to being a train driver, Dorofeeva was an art student, posting anime-style drawings of trains, tracks, and railways on her Instagram.

“What is a woman doing in your train’s cabin?!” Dorofeeva wrote in a recent viral Instagram post. “Well… She checks the conditions of the tracks and the contact wire system equipment, monitors the signals and makes sure the driver follows them to a tee. Opens the door and keeps a careful eye over how passengers get on and off the train. Then she closes the doors and gives the departure signal required for the train to leave. She works under the direct supervision of the senior driver, passes through the train in order to detect any possible defects that occur on the journey. […] This post is dedicated to all the passengers who stare at me with wide eyes.”

While the rest of the city was under strict stay-at-home orders, Dorofeeva was one of the two drivers behind the ЭР2Р-7013 electric train taking passengers through Moscow and toward the surrounding suburbs and more distant villages — going from the normally-bustling capital streets to farmhouses and silos and, depending on the time of year, stretches of snow-covered tracks.

“It doesn’t give me much pleasure to break off huge chunks of ice covering the rails with a crowbar but what is there to do — the train has to keep moving,” Dorofeeva wrote in another Instagram post. “The biggest bliss is to then get to enter the warm cabin after all those ice-removal procedures. The warmth strikes you right to your brain.” 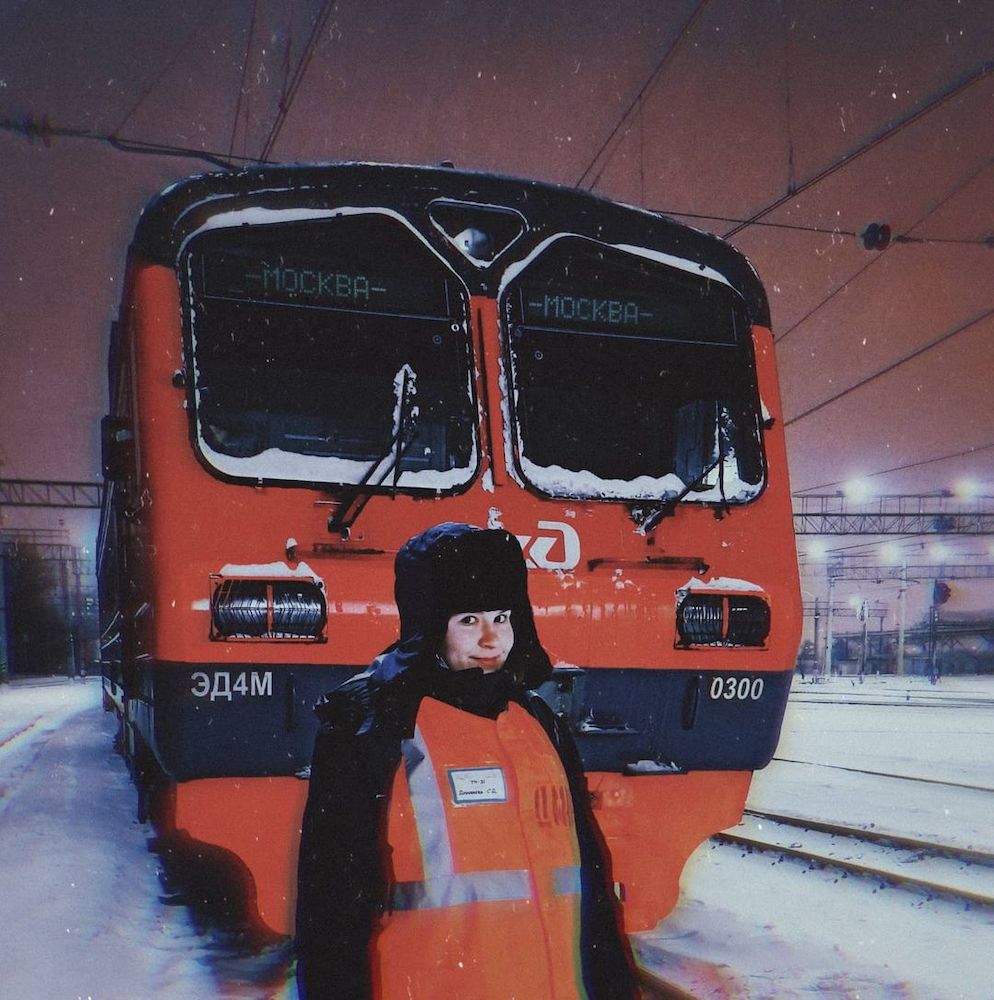 Dorofeeva was thrilled for the ban on female train conductors to be lifted; she now documents her experiences on her Instagram.

For many women, this profession is the natural realization of a lifelong dream and a love of travel. Born in Istanbul, 37-year-old Güler Baran received a toy train as a gift from her father when she was three years old. After graduating with a degree in industrial electronics from Sakarya University, Baran became a driver for Turkish State Railways (TCDD) and drives a 4,000-person passenger train from Istanbul to the Kocaeli province and back.

“I love travelling and I am always keen on learning about different cultures, languages, traditions and cuisines,” Kaur said. “A year ago, I started travelling by myself and explored a few of the Asian countries and the Pacific Islands. Then suddenly COVID-19 struck and changed our lives. We are blessed to be working in a sector that is still functioning amidst the pandemic.” 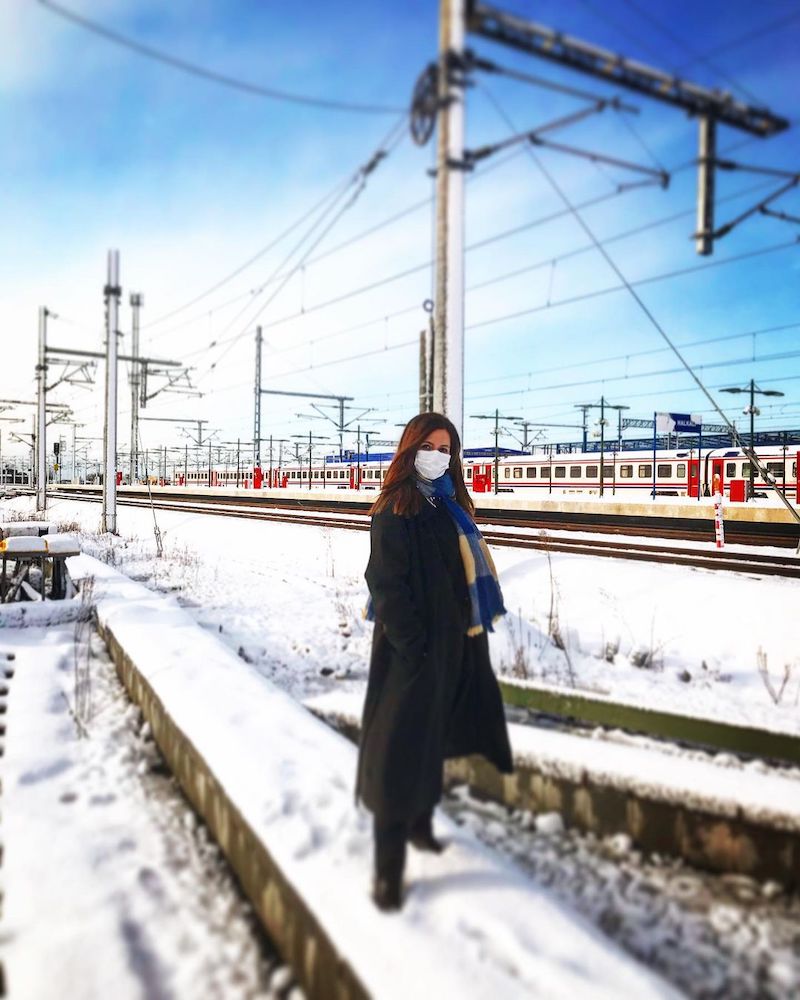 37-year-old Güler Baran, a driver for Turkish State Railways, received a toy train as a gift from her father when she was three years old—and the rest is history. Photo by Güler Baran.

While the pandemic has greatly diminished the number of train travelers in Turkey and provided additional challenges with having to drive in masks for long stretches of time, it has also allowed Baran to see the diversity of her home country through the prism of its railway system. She, too, started an Instagram account to capture all the sights she gets to experience from her driver’s seat — snow-covered buildings of Istanbul in December, tracks going through the sea of Marmara from the European side of Turkey to its Asian side, a dog who wandered the railway and refused to leave even after the train came to a halt.

“Female passengers applaud when they see me, men are confused,” Baran says. “[…] If a woman wants, she can achieve everything.”