How Emily King Packs for the Grammys

Two-time Grammy-nominated musician Emily King bares her soul and her suitcase in the midst of awards season.

The ensemble consists of a turtleneck and trousers, sleek black heels, and a light coat. The only hint of color is on her lips, a classic red, but as soon as she opens them, her one-note look gives way to a chorus of personality—quickly disclosing her carefully considered reason for the monochrome noir: “I kind of committed to [all black] about a year ago. It was hard because I like color, but more than that, I like rules and limitations,” asserts the 34-year-old R&B artist. “I just really needed to have some sort of system in place where I can travel easily and feel like a boss.”

King grew up on Houston street in New York City. She’s been back at home since the end of her recent tour with Sara Bareilles, and  just released a fully stripped-down, all-acoustic album, Sides, which reimagines and simplifies old material from her previous albums, introducing string elements and pulling back on vocal complexity. “I’m grateful for limitations because I really enjoy music that is simple but great. It’s why we all love the Beatles so much,” she says. 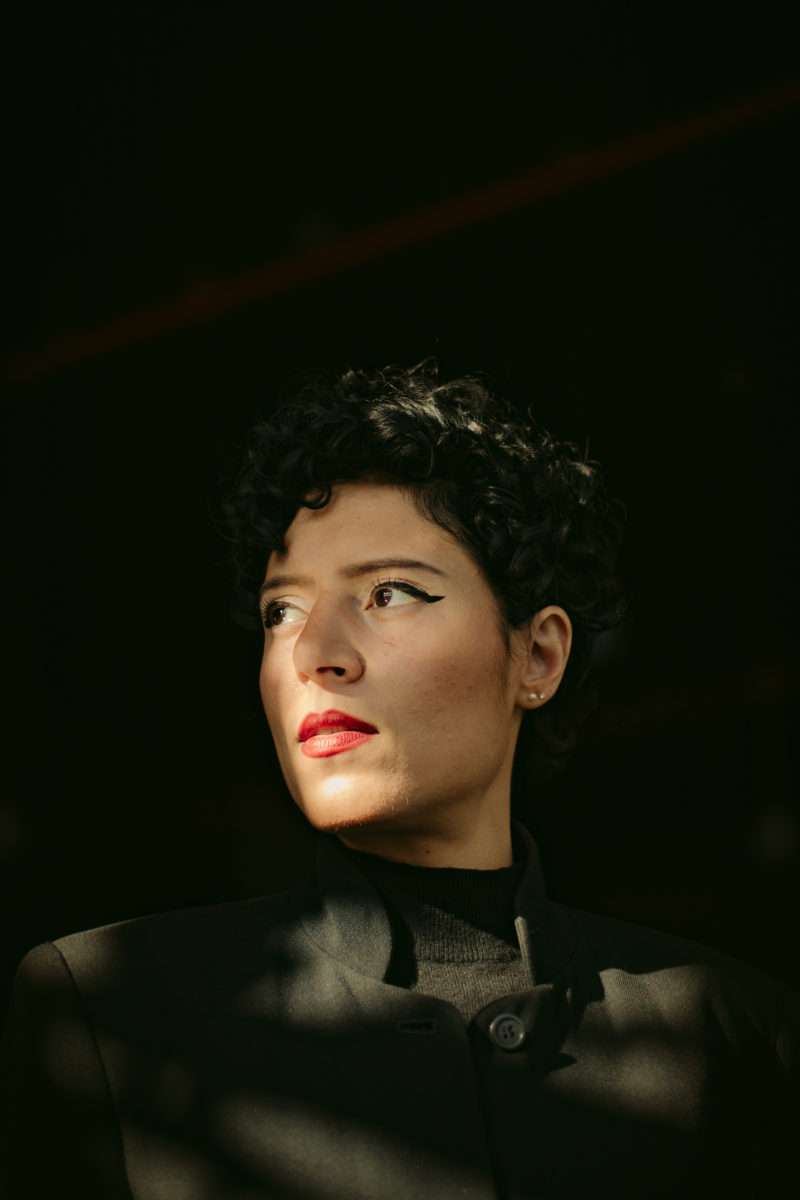 King grew up on Houston Street "just north of Little Italy," but was recently renting a place in Woodstock, New York. "I needed the country and I ended up writing an album there." 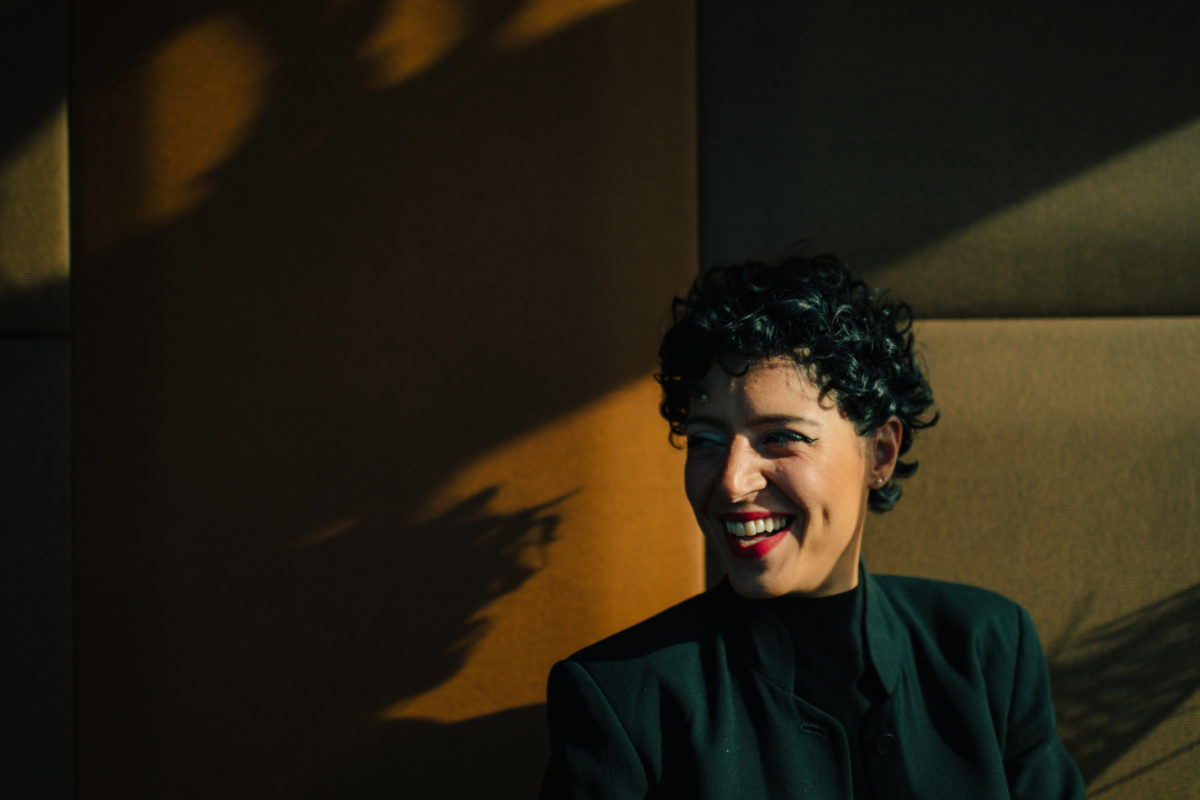 Don't let the mourner's clothes fool you: Emily King is full of personality.

Limitations, discipline, precision—all things that King (and so many others who feel lost in our hyperstimulating social media age) has learned to cherish and prioritize. “You have to be self-sustaining in your joy and your motivation,” she says. “When you’re on the phone looking for acknowledgment, you’re eating from an empty bowl. If I want to lose myself, I’ll go on Instagram 100 times a day. If I want to find myself, I’ll turn off my phone and I’ll write a song. I think we all know what’s good for us and what’s not good for us, but the practice of actually doing what’s good for me is my resolution for the year. Because to make the most of this life, you have to have discipline.”

But even though she’s learning to chip away at the distractions—the social media, the awards, the superficial acknowledgments, superfluous fashion—and pare down her life to the essentials, King still manages to have fun. One of her favorite travel destinations, ironically enough, is Vegas, a maximalist mecca. “I just love being in a casino. I like the sounds,” she says. “I’m sold on the whole Rat Pack thing, which is just a total delusion. Vegas is just so awful it’s beautiful.”

We caught up with her at Hotel Hugo ahead of the Grammys—for which she received two nominations this year for best R&B song and best contemporary R&B album—to learn more about her travel style, what she packs, and her ever-inspiring philosophy that greatness is truly born of simplicity (unless, of course, we’re talking about gambling). 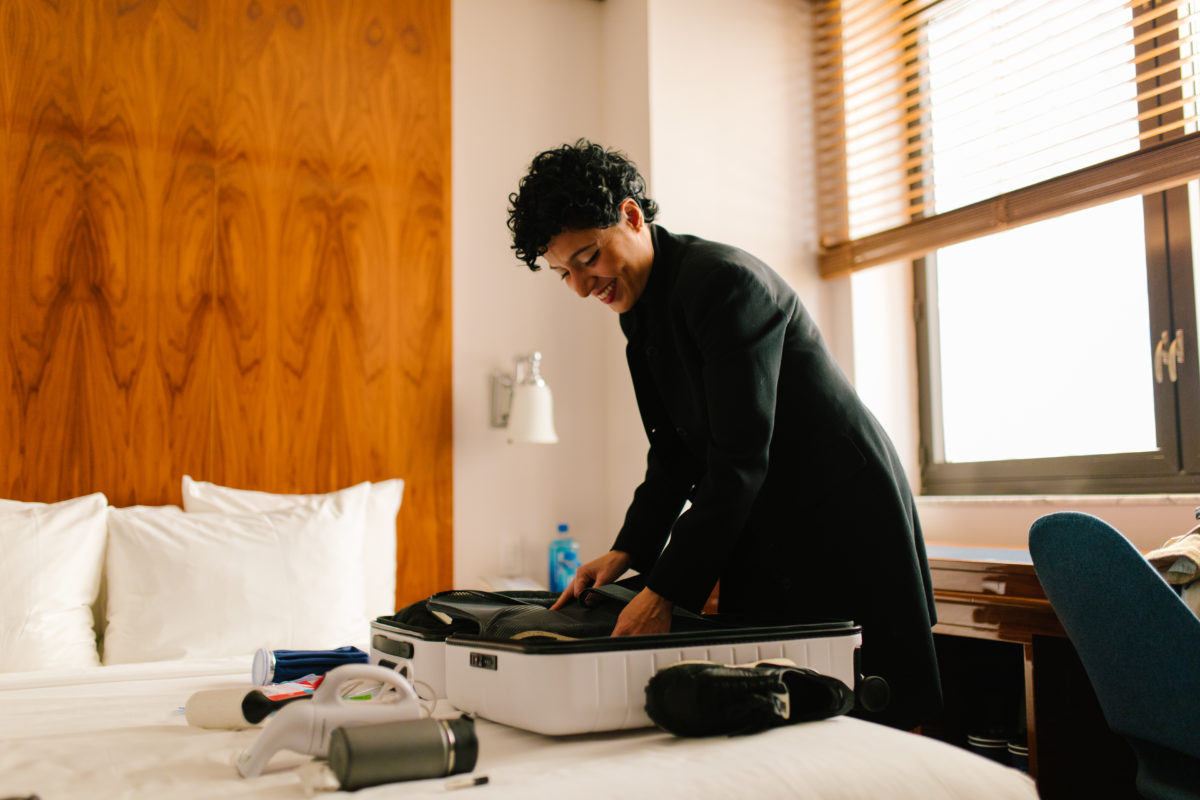 "I was in California so much on tour and of course all my New York friends live there now. I'm being pressured into moving to California. I'm like, can I dream big like that? Can I have both?" 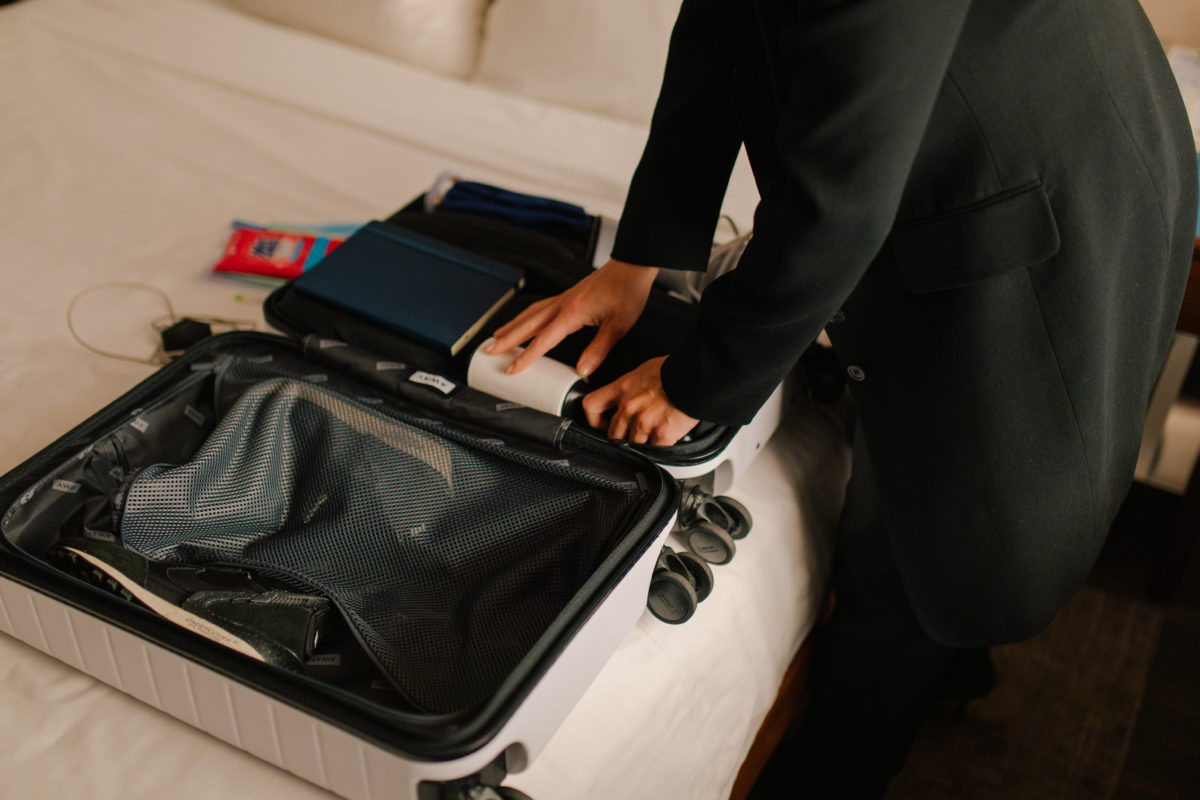 King likes to have a self-imposed set of rules for getting dressed in the morning. "I don't think I really have a natural style fashion-wise."

Get Thee to a Grammys

I was nominated for the Grammys in 2008, when I was in a whole different world within the industry. I just remember that I couldn’t fully enjoy myself because I was kicking myself for making certain creative choices that I didn’t believe in and I was just doing it to try to be famous and appease the people around me.

Now I care less about some things and more about other things. I’ve been able to shift and make music that I really enjoy listening to without having to get anyone else’s opinion. I’m kind of just excited to go to the party and dress up and not really worry about the outcome. Although, I can’t help myself, it would be nice to win. But as a grown up person, I understand how things work. It’s not a true measure of anybody’s artistic success. 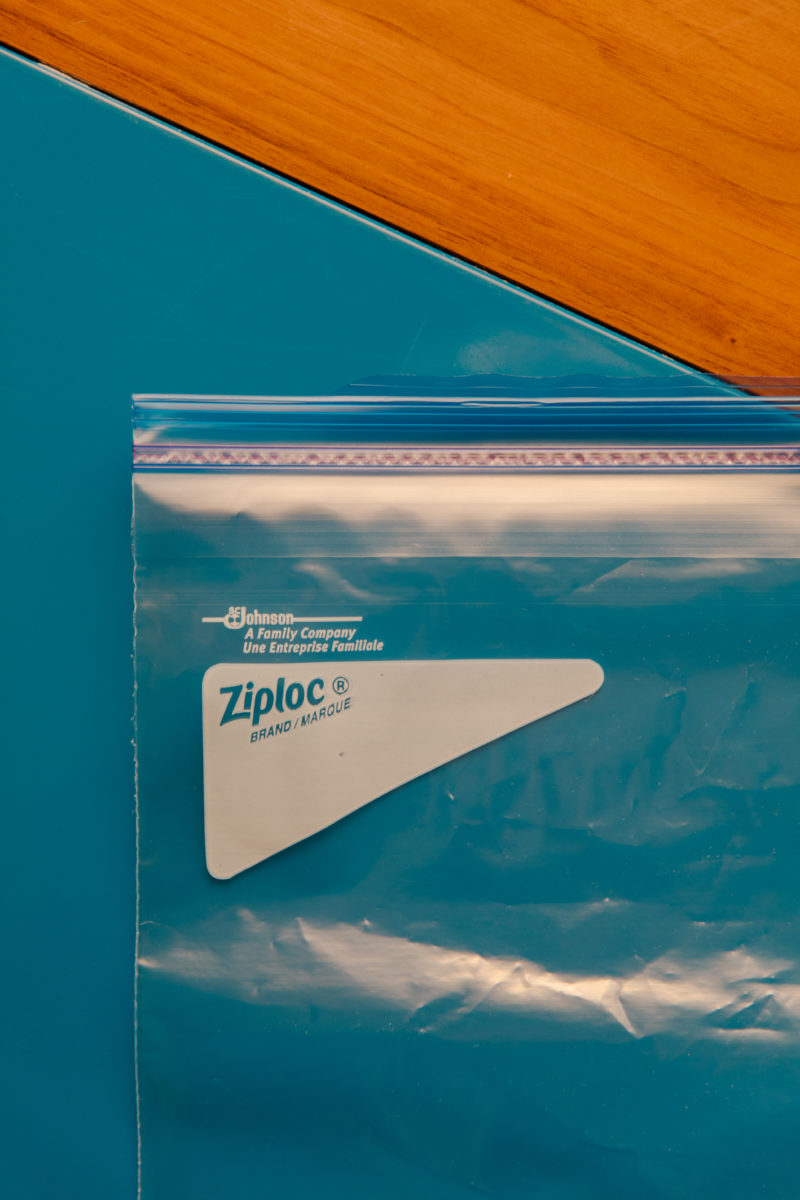 "A Ziploc bag is essential for traveling." 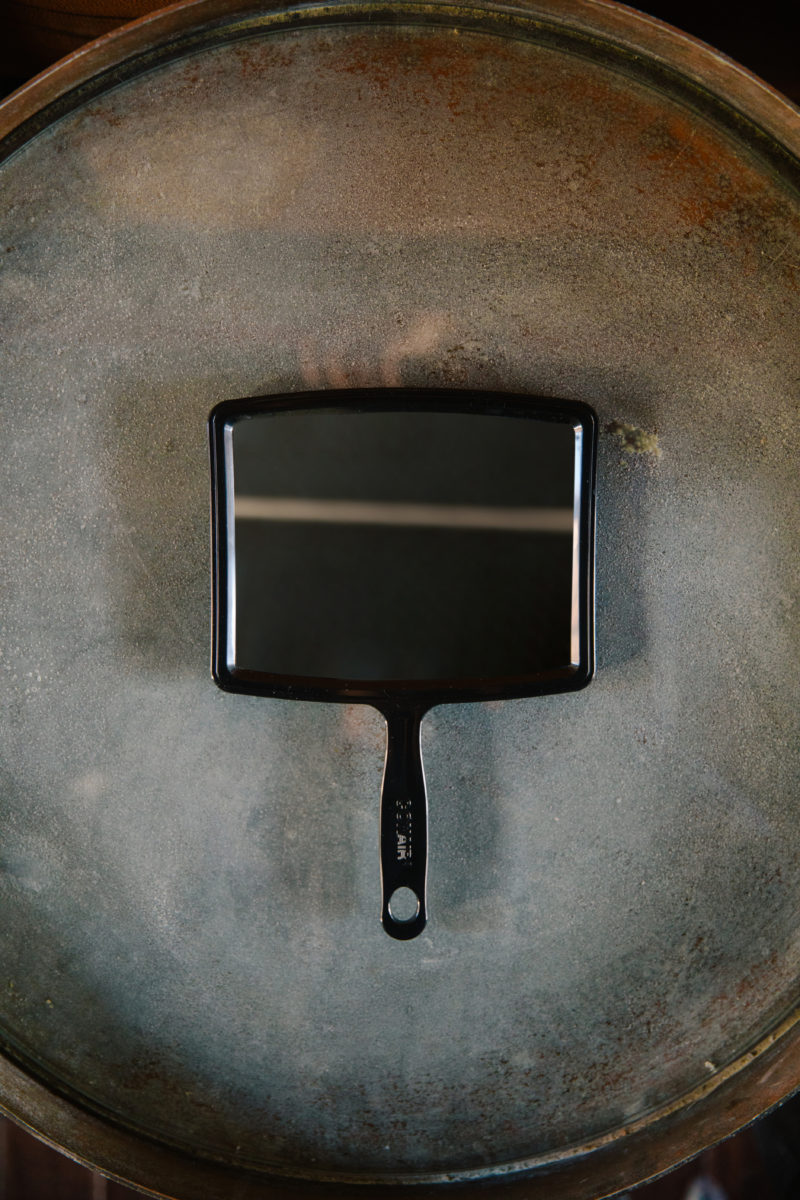 "I'm like Mary Poppins with this giant mirror in my bag. But I do use it a lot; when you have short hair, black hair, it gets parted in these weird ways and you look bald. So I have to always check the back angles no matter where I am."

It’s Getting Hot in Here

There’s always a Ziplock bag and a Moleskine in my suitcase, and a lint roller, because I wear all black. On tour, I bring my favorite nail color, Mademoiselle by Essie. It’s the perfect shade of nude pink because you kind of can’t tell that you’re wearing nail polish, but it looks clean and it matches anything.

And there’s the old lady stuff—my hot water bottle. It’s on Amazon and it actually came with three different sizes for $10. You can fill it up with hot water at the hotel, and for us women, for cramps, it’s essential. On tour, the venues are freezing too so you kind of want something like that. Actually everything I have is basically about hot water. I bring a little thing to make tea with, plus I bring this steamer, which is the best—it is very important to not feel wrinkly, not only for the general public, but for your own self e-steam. No pun intended. [Ed. note: Pun definitely intended.] 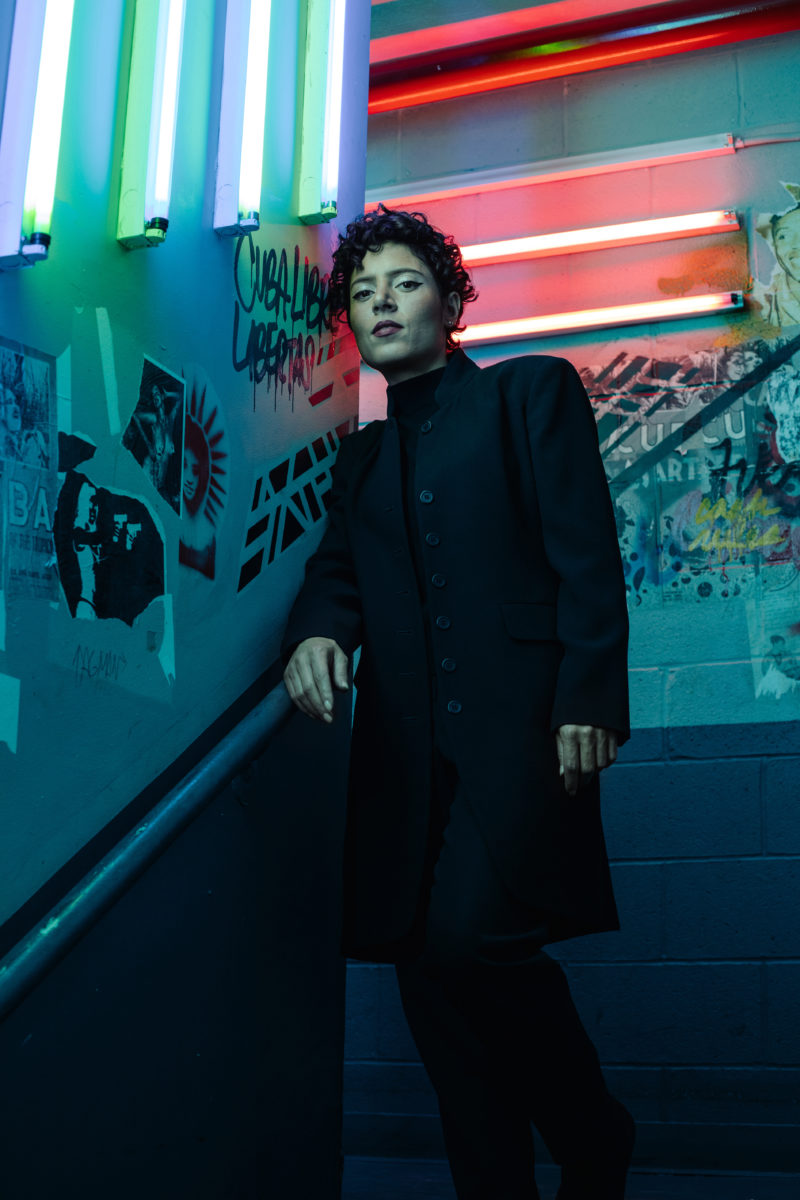 "I'm from New York and we always wear black. You go other places and you stand out like a sore thumb. I was just in Denver and everyone was like, 'Vampire! The devil's here!'" 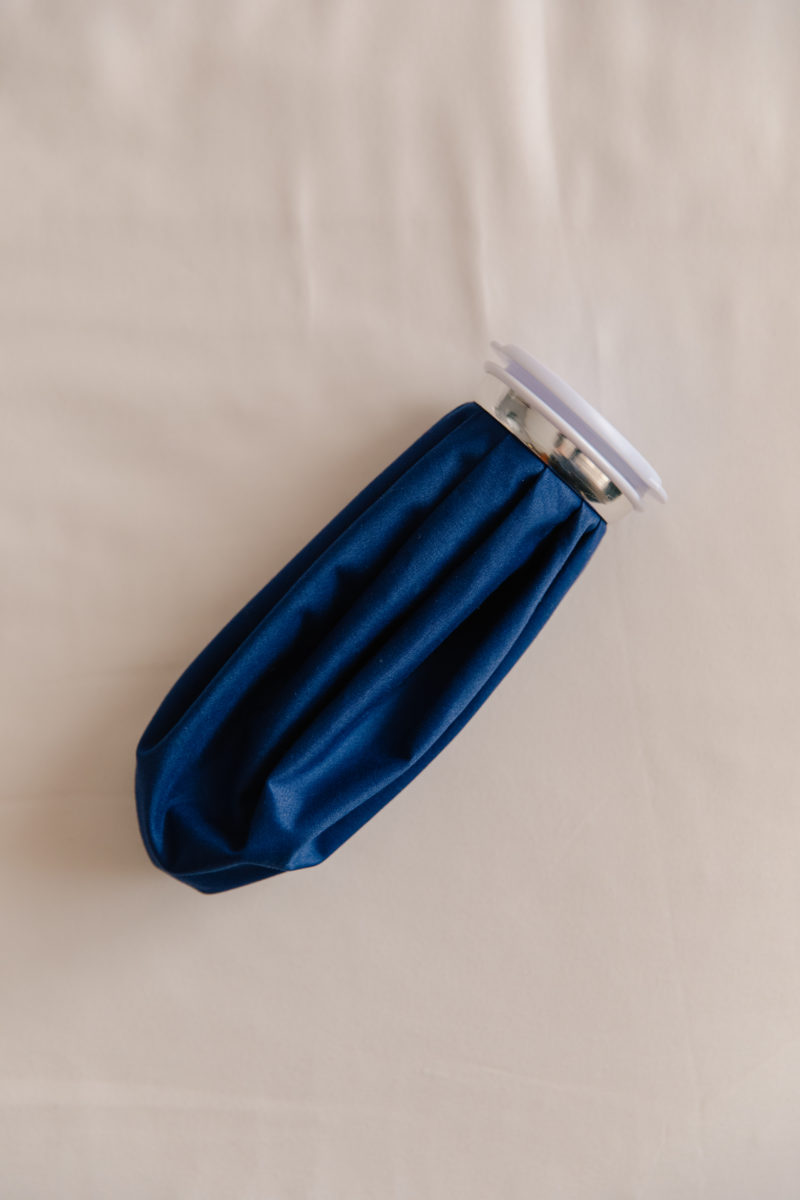 Keeping a hot water bottle on hand is great for relaxation. On tour, it's all about the simple pleasures.

A couple weeks ago I went on a private jet for the first time—I’m 34 years old and I’d never even been in first class! I had a charity event in the Bahamas, and now it’s like how am I ever going to travel again? No overhead bins. You don’t have to go through security. You just show up. The pilot escorted me onto the plane himself. They made us cinnamon buns and served them on a plate with a fork and knife. It was… crazy.

But when I’m not flying in a private jet, I use my new AirPods that my manager gave me, which are noise-canceling. But the last time I flew to LA, I sat next to this old man who was around 85 years old and he was chatting a lot. He was a sweet guy, but finally I did the polite “I’m checking out of this conversation” thing by putting in my AirPods. But I don’t think everybody understands what these are because the design is so slick! On my next plane, I’m going to have a set of dummy headphones to put on top of my AirPods to really get the point across. They are very practical, but they didn’t get me out of my six-hour-long conversation with Steve. He’s a scientist, he lives in Long Island, and travels to LA for this convention every year. I learned everything about him. 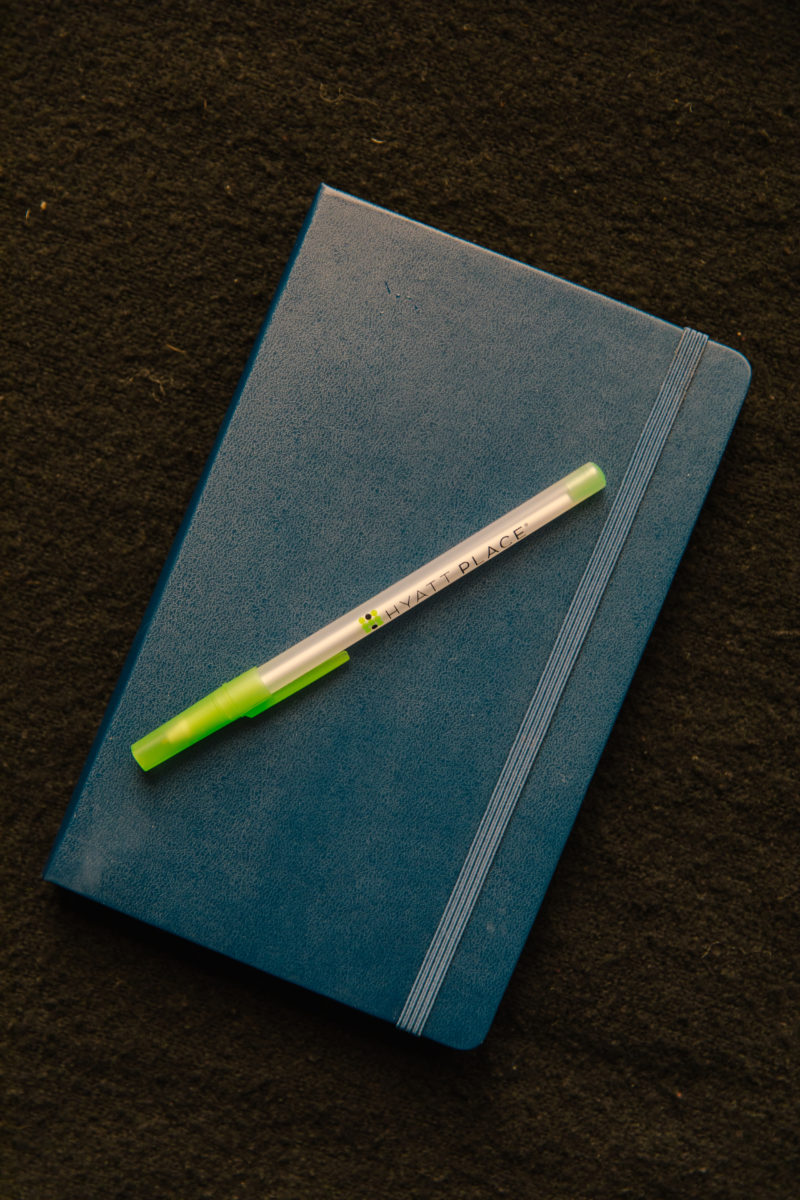 "I'm a pen hoarder, I always take the free pen from the hotel." 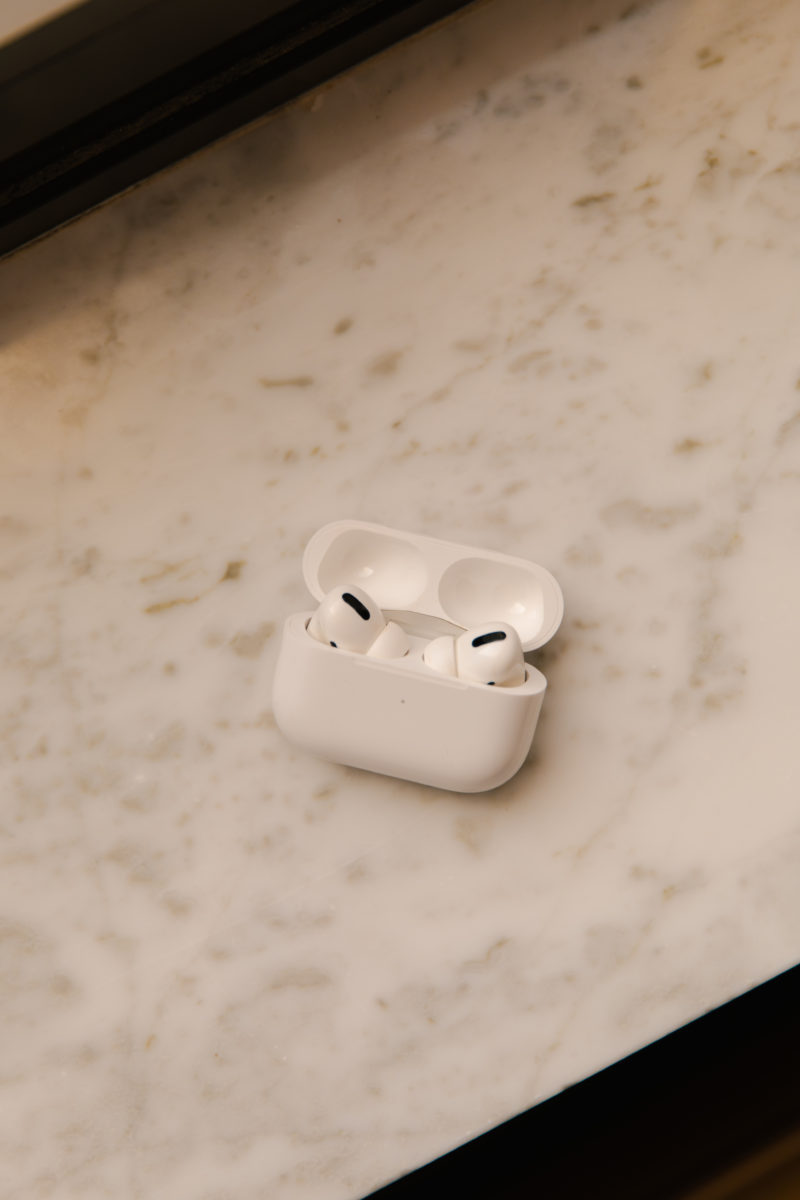 About Steve, King's talkative seatmate on a recent flight to LA, she says: "He was a really nice guy. And I don't remember the person next to me on the flight back. I guess if you want to be remembered, you have to talk to people. Or have a bad smell."

Got Me Walking Sides to Side

We went to LA to record [my new album Sides], and that was the first time we’d recorded an album outside of our own laptops. We usually engineer everything at home, so this time we set some rules for ourselves: We’re not going to record at home, we’re going to do it in a proper studio, and we’re going to use acoustic instruments, nothing electronic. We’re going to really limit the background vocals, because a lot of the time I put too many, which allowed me to really focus on things like strings. This was the first project where we’ve had live strings.

We started recording in July and that’s actually when I had my first earthquake experience. We were in the studio and the guitar started shaking and at first I thought, “Oh, it’s the subway.” You know the rumbling? But it was really amazing. I wasn’t so much scared as I was just thrilled. But then the next day there was another, and then I was like, “We all gonna die.” 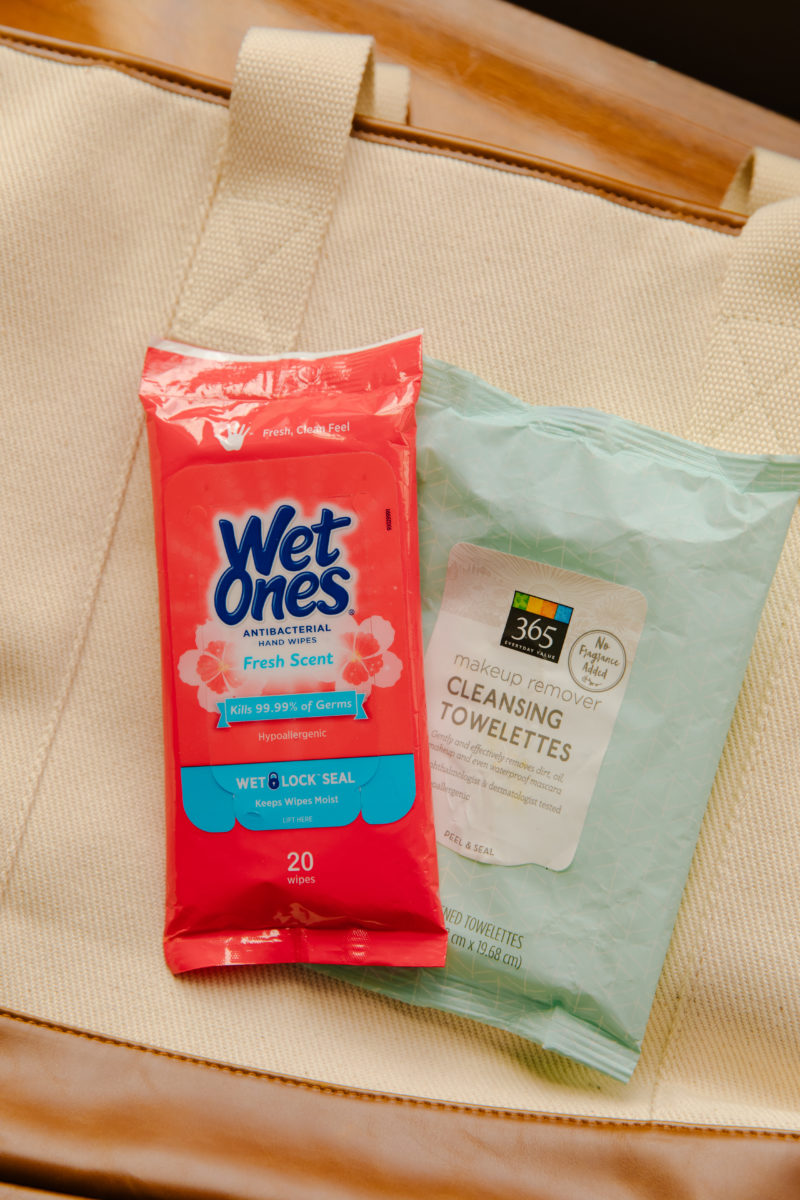 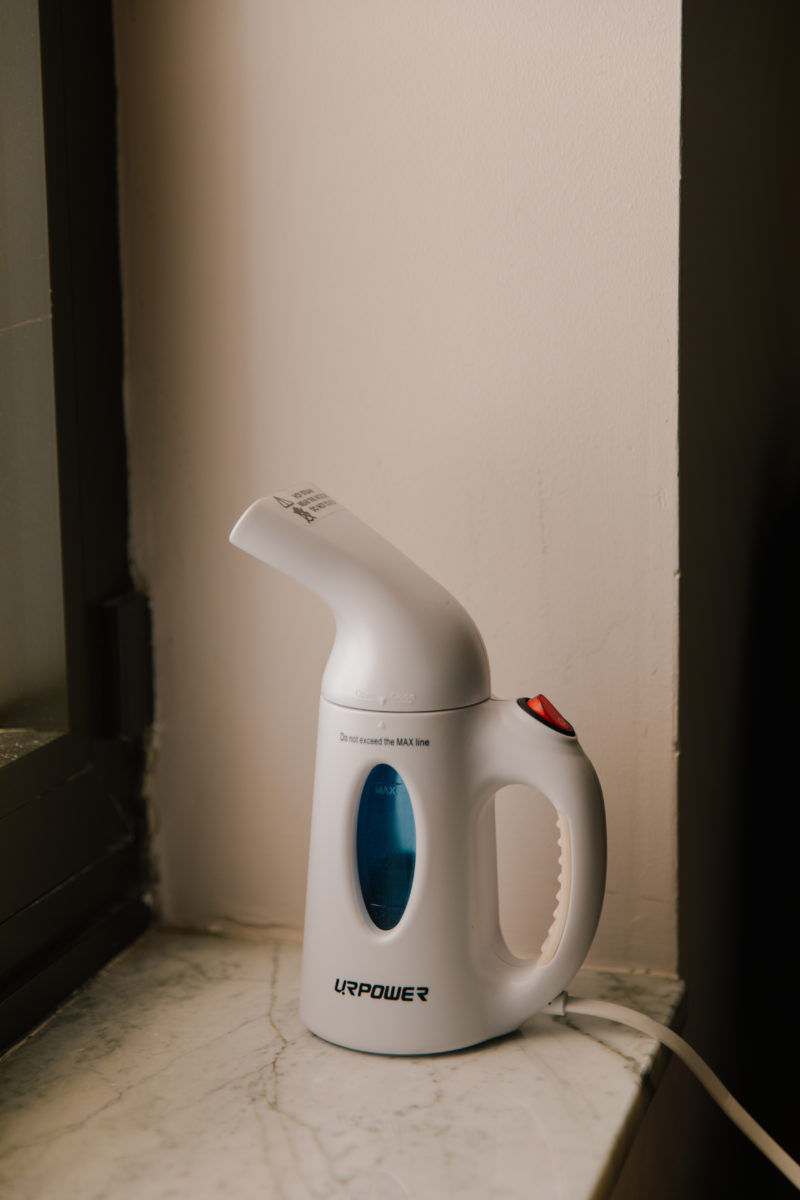 Playing in NYC, like at Bowery Ballroom, is special. There is something about walking home after the gig. That’s pretty unique [to New York]. Can’t really do that in many other places. New York does always feel familial. It’s one of those things you don’t appreciate until you leave, that’s how I feel about New York. You really don’t appreciate it until you get out of it. When I’m not here, I miss the cultural diversity—coming from a bunch of different cultures myself, ethnically, and then growing up Downtown, that’s really the main thing that I miss. And the coffee.