Inside Dubai restaurant Al Fanar, which serves a specialty dish called machboos, made of meat, rice, and onion, and flavored with loomi.
IndexBibi Deitz

Dubai has diverse mix of upscale and casual dining—making it one of the most surprising (and exciting) culinary cities in the world. These are the eight best Dubai restaurants for the traveling foodie, from humble fish shacks to all-day brunch.

You might plan a trip to Dubai around visiting the Burj Khalifa, skiing indoors, or whiling away the time at one of the many resorts, but Dubai is full of surprises—and one of the biggest is that it is a major food town.

Any meal you can dream up is within reach. As one might expect, lavish dinners featuring cuisines from around the world abound in this oil-rich city. But there’s also incredible local fare throughout Dubai. You haven’t truly experienced Dubai’s food culture until you’ve sampled one of many types of dates indigenous to the region, or tried a dish flavored with loomi, made from sun-dried limes boiled in saltwater.

At the edge of the Arabian Peninsula, Dubai is close to seven major bodies of water—meaning this is a seafood town. Whether you’re tackling a paper plate full of fried prawns or tucking into some of the best sushi outside of Tokyo with views clear across the Persian Gulf, it’s easy to forget you’re not far from the world’s second-largest subtropical desert.

Ahead, discover eight places you’ll want to squeeze into your stay in the UAE—four upscale restaurants fit for royalty, and four laid-back options when you just need a steaming bowl of shorbat. Never heard of that? Read on. 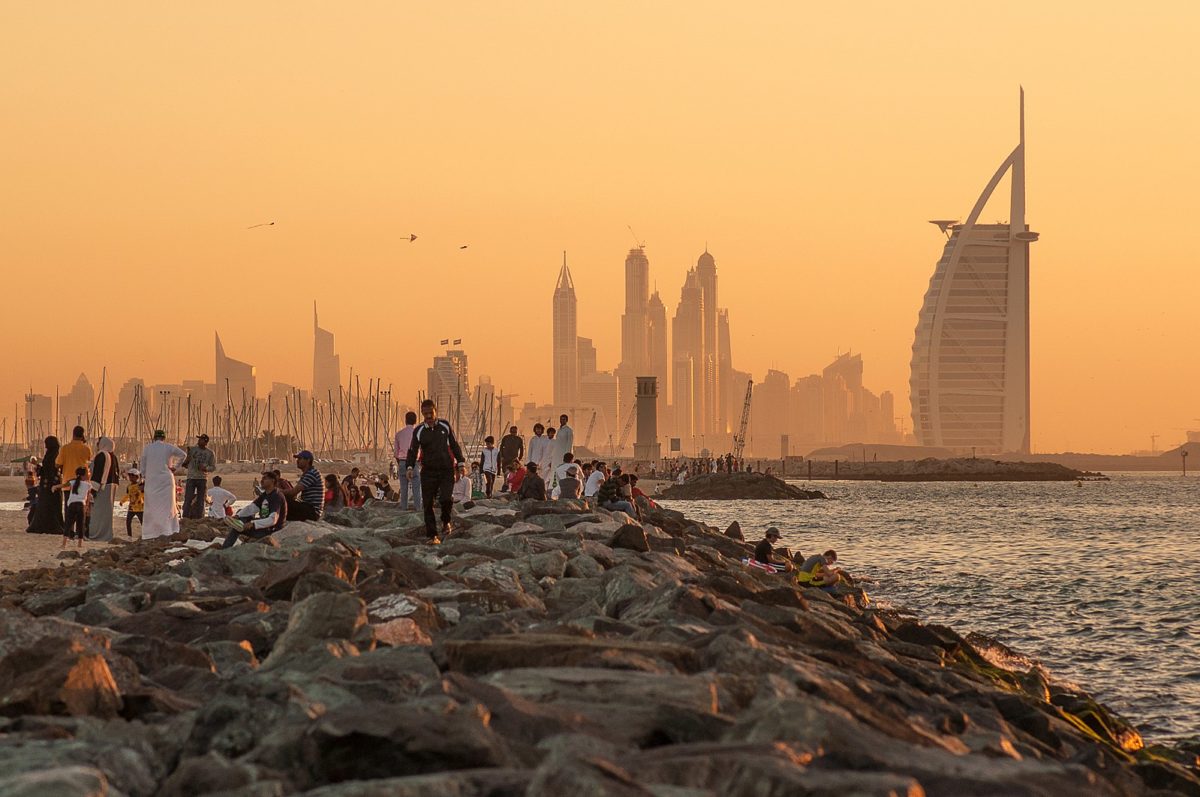 If you’re going to order fish in Dubai, don’t miss this humble fish shack on Jumeirah Beach, which trades in paper plates and plastic chairs, and treats all its customers the same, no matter where they come from. The biggest decision you’ll have to make is whether to order fried fish or prawns. Solution: Come hungry (and with partners in crime) and order both, with a healthy side of paratha bread and curry sauce.

It may feel counterintuitive to order Italian food in Dubai, but you’ll be glad you did. Start with the poached egg, topped with black truffles, smoky Parmigiano Reggiano and green asparagus. The Burrata E Alici is the highlight of the menu, a pillowy, firm orecchiette that is particularly mind-blowing thanks to being cooked in burrata juice and served with anchovies, confit tomatoes, bottarga, and thyme. Chef Massimo Bottura owns the three-Michelin-starred Osteria Francescana in Modena; this is his only restaurant outside of Italy. 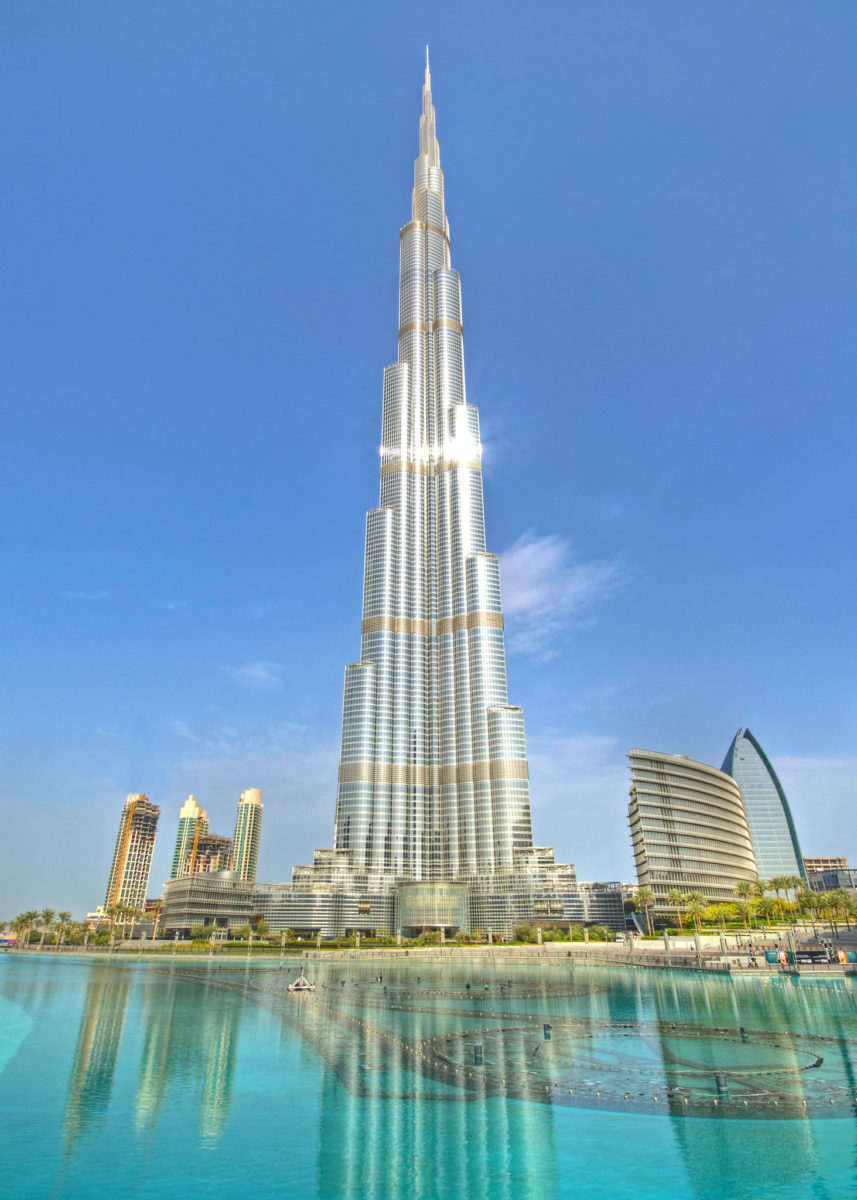 Near Zuma in Dubai, diners can get a view of the Burj Khalifa, the tallest building on earth. Photo by Colin Capelle.

Brunch is a bigger deal in Dubai than it is in certain parts of Brooklyn, and it can last all day. It’ll cost you, but for the full experience, book a table at Zuma, where you’ll be plied with champagne and you can hit the buffet of oysters, sushi, and dim sum while you take in the sights. Miso-marinated black cod is the star of the options on the prix fixe, followed by the cedar-wood roasted baby chicken. Brunch is more than an activity in Dubai—it’s a verb, and it invites you to dress up and revel in an over-the-top vibe. 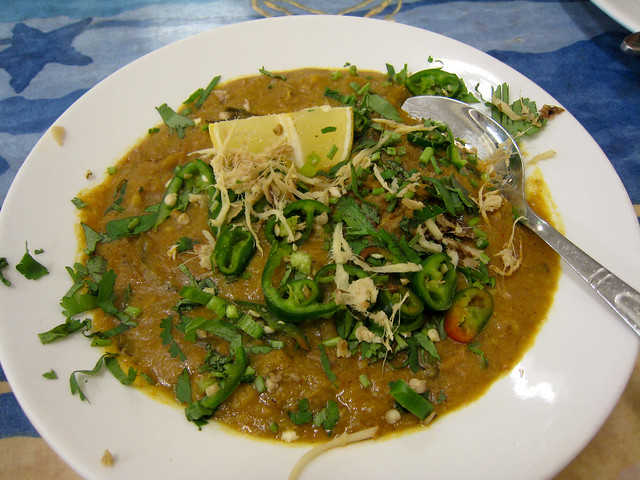 Haleem, served at Ravi's in Dubai, is a dish of slow-cooked wheat, lentils, beef, and spices. Photo by Charles Haynes.

It’s rare that “cheap” and “excellent” find themselves in the same sentence, but that’s Ravi’s, a bare-bones Pakistani joint that saves its frills for the flavors in its dishes. Don’t miss the chicken tikka or the dal fry, lightly spiced lentils that will make you turn up your nose at American lentil dishes forever. Wash it down with a lassi, and if you’re in the mood, go back for breakfast. The place opens at 5 a.m. to accommodate blue-collar workers, and the haleem—a slow-cooked wheat and barley cereal with meat, lentils, and spices—will keep you full for hours. Get a double order of puri and parathas.

Come for the food, stay for the views. With two levels of seating in the palatial restaurant, there’s no such thing as a bad seat. You’ll want to linger over your dessert and watch the sky, or order another drink just to take in the sunset over the water. But the view is certainly not the only draw. You’ll have some of the best Japanese fare of your life here, with sushi rolls filled with buttery salmon and a playful tuna pizza. 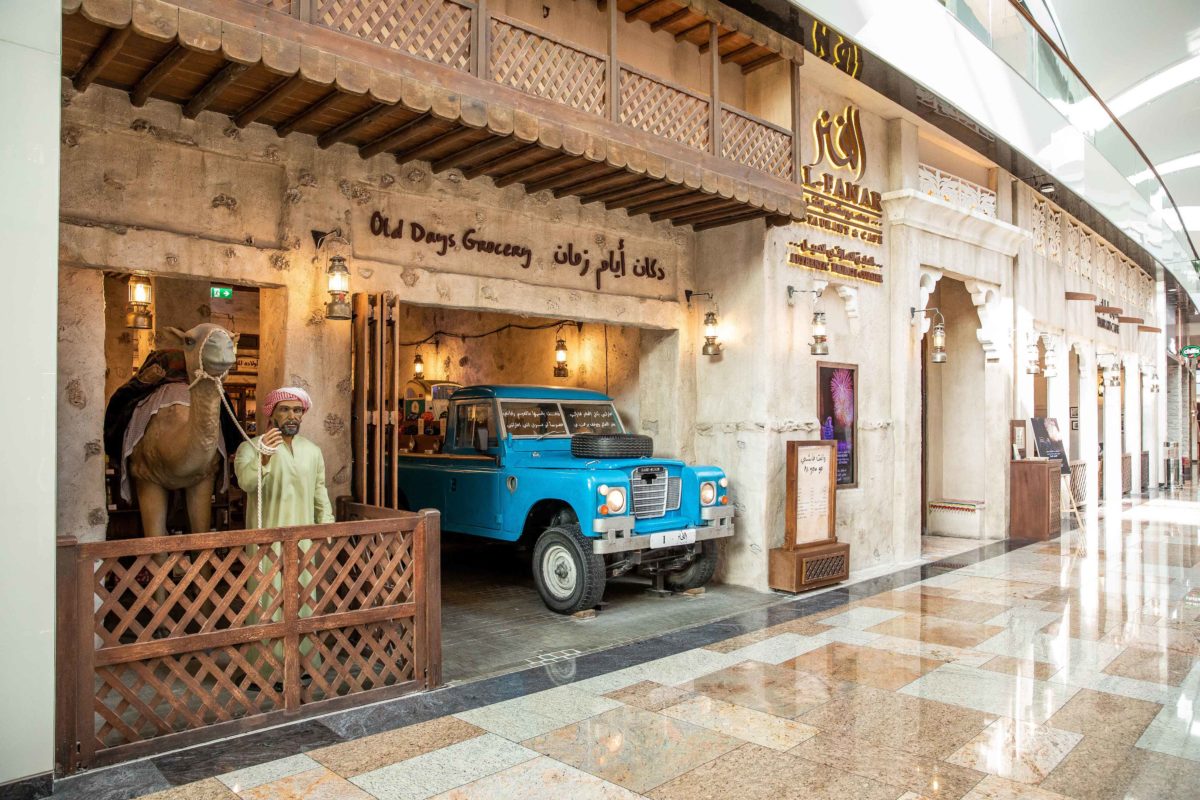 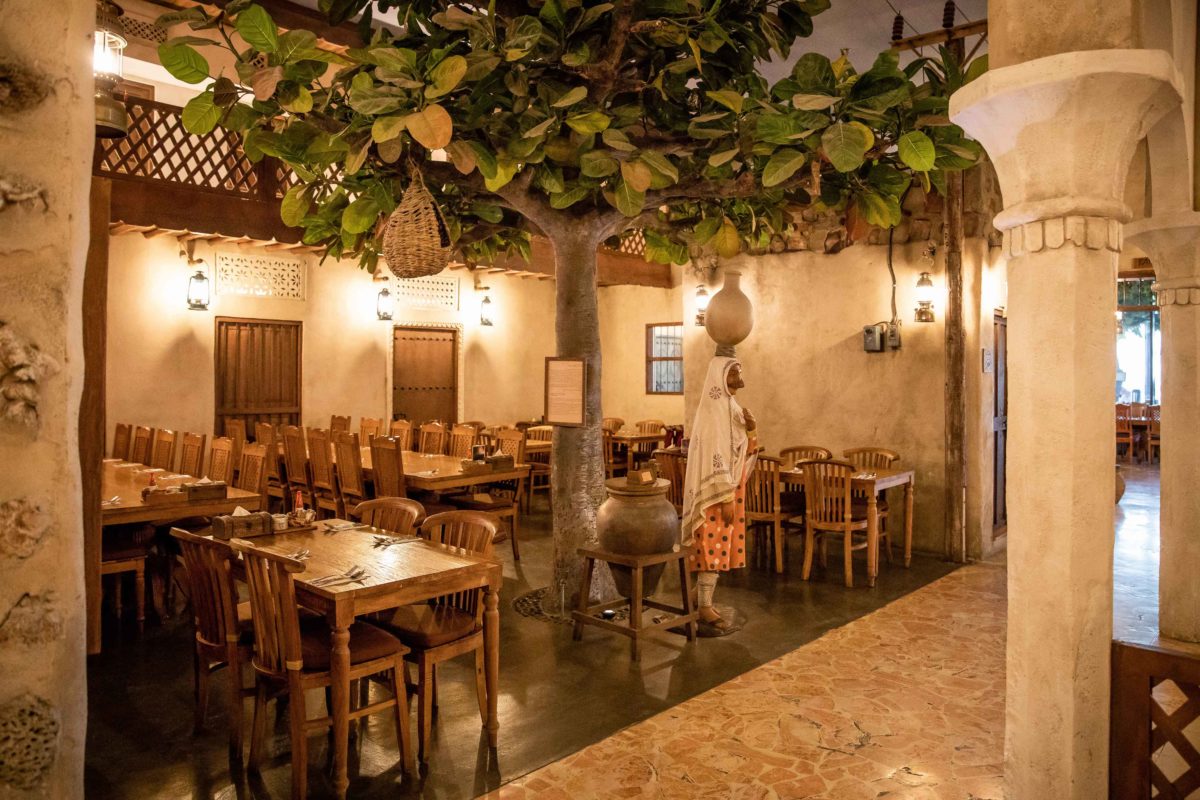 The interior of Al Fanar restaurant attempts to channel a time when Dubai was a small port city. 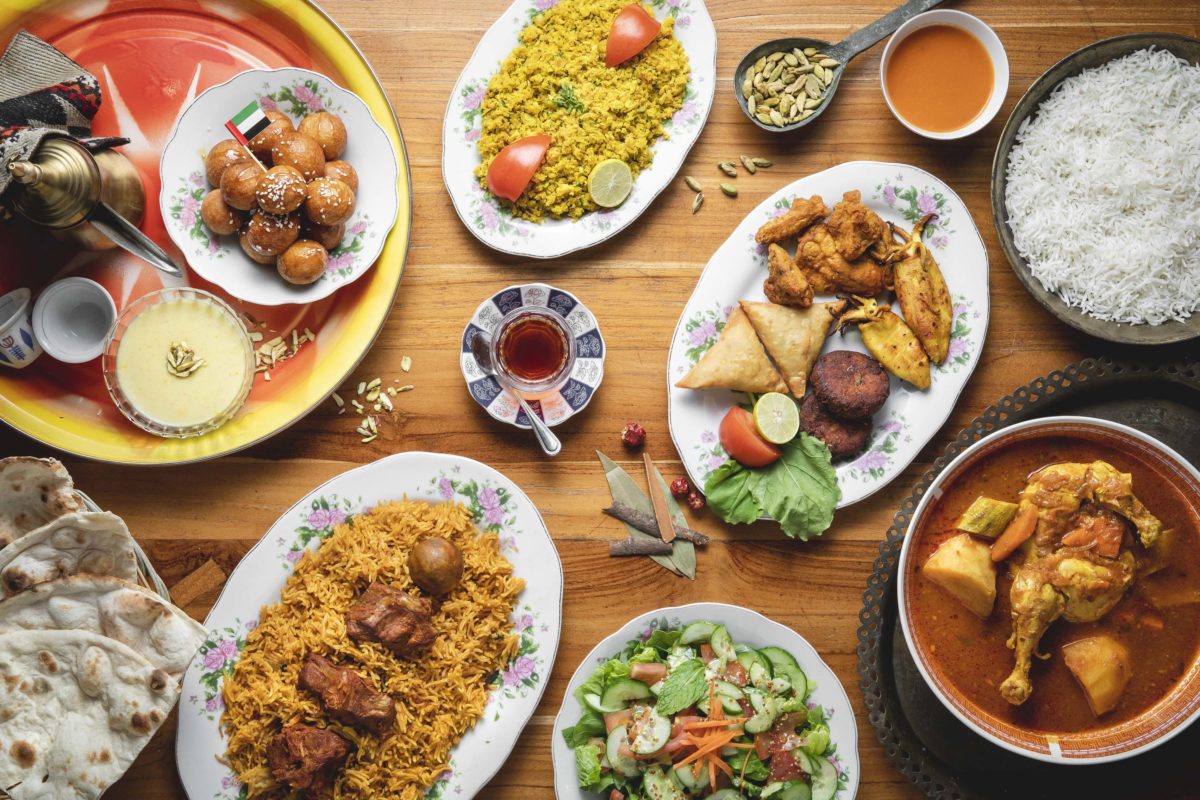 What to order at Al Fanar: machboos, shorbat, and khabisa.

Sometimes the best dining strategy in a foreign city is to follow specific local dishes. In Dubai, you would be remiss to leave without trying machboos, a dish of meat, rice, and onion, flavored with loomi. Once upon a time, before the oil rushed in, Dubai was a small fishing city on the coast of the Persian Gulf, and Al Fanar attempts to take you back to that moment with its decor. It may be kitschy, but it’s a welcome respite from the glitz and glamour that abounds everywhere else. Start off with a bowl of shorbat, a lentil-based soup, and finish with khabisa, made of sautéed flour and molasses.

For just under $100, treat yourself to the epic tasting menu at this lavish Lebanese import, curated and seasonally updated by the owner herself. Yalangi (stuffed grape leaves) come dripping with oil and stuffed with tangy spiced rice. Taouk (chicken kebabs) arrive piping hot and emanating cumin, garlic, and mint. Manakish (circles of dough slathered with thyme) will soak up anything left behind. And if you miss trying the tamriyeh, we can’t help you. Crunchy pillows of fried dough filled with semolina pudding and dusted with icing sugar, these are the Middle East’s answer to something between funnel cakes and a Boston cream. Just say yes. 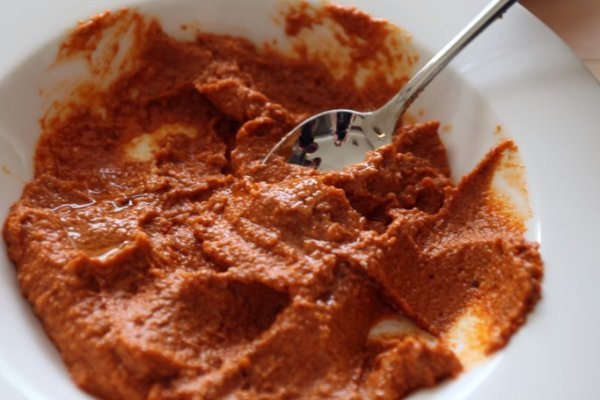 Muhammara, served at Ibn Albahr in Dubai, is made of chili, cashews, walnuts, and pine nuts. Photo by Gail.

This Lebanese seafood restaurant boasts “a fish for every dish,” and they aren’t wrong. Your best bet is the Ibn AlBahr cashew nut seasoning on some fresh fish, but if you’re feeling like something a little closer to home, their fish and chips can stand its own next to England’s finest. Start off with hummus and muhammara, made of chili, cashew, walnut, and pine nut, and wash it all down with cinnamon tea with nuts. If you’re feeling adventurous, order a shisha after your meal—hookah smoking is serious business in these parts, and the flavor selection is extensive.