Why Cumbia Is the Musical Soul of Mexico City

Salón Los Angeles, a popular cumbia dancehall in Mexico City, prior to a night of dancing.
DispatchZoe MendelsonLaurence Philomene

The origins of some of Mexico City’s most popular anthems may surprise you. Plus, where to go cumbia dancing in CDMX.

In Mexico City, cumbia blares out of buses, pharmacies, construction sites, and fancy mezcalerías alike. My Mexican husband once asked me if I knew his country’s national anthem, and I started singing the inescapable, melodramatic, exaggeratedly nasal “Cómo Te Voy a Olvidar” by the megapopular Mexico City cumbia group Los Ángeles Azules. He agreed that my version was a solid stand-in.

Cumbia has been called the “musical backbone of Latin America” (NPR). It’s a genre of music with a wide range of styles and sounds, unified by its quick-quick-slow rhythm. Maybe you’ve never heard of it, but you’ve most likely heard it and thought it was salsa, or maybe reggaeton. It frequently borrows from and lends to both.

Cumbia’s origins are in the music of African slaves brought to the north coast of Colombia. The music was originally played with African drums, mixed with indigenous instruments like flutes and maracas. When cumbia made its way to Mexico in the 1940s, it started to get orchestrated with wind instruments. It mixed with other tropical music like danzón and rumba. And then it completely exploded; Mexico went loco for cumbia.

“I think people identified with it because it was working people’s music. Cumbia is a tribute to liberty. You feel it in your body,” says Marisol Mendoza, a cumbia historian, cultural producer, sonidera (cumbia DJ), and founder of Las Musas Sonideras, a popular women’s sonidera collective. By the 1960s there was such a demand for cumbia in Mexico that record-sellers would travel to Colombia and bring vinyls back “like music traffickers,” says Mendoza.

“It was working people’s music. Cumbia is a tribute to liberty.”

“And once we sonideros would buy them, we would cover up the album titles and artist names to make the music we had exclusive,” says Ricardo Mendoza, a famous sonidero, star of the film Yo No Soy Guapo, and Marisol’s father.

“I feel bad we didn’t support the artists more now. But still, Colombians who played cumbia started coming to Mexico to further their careers. This was their trampoline.” 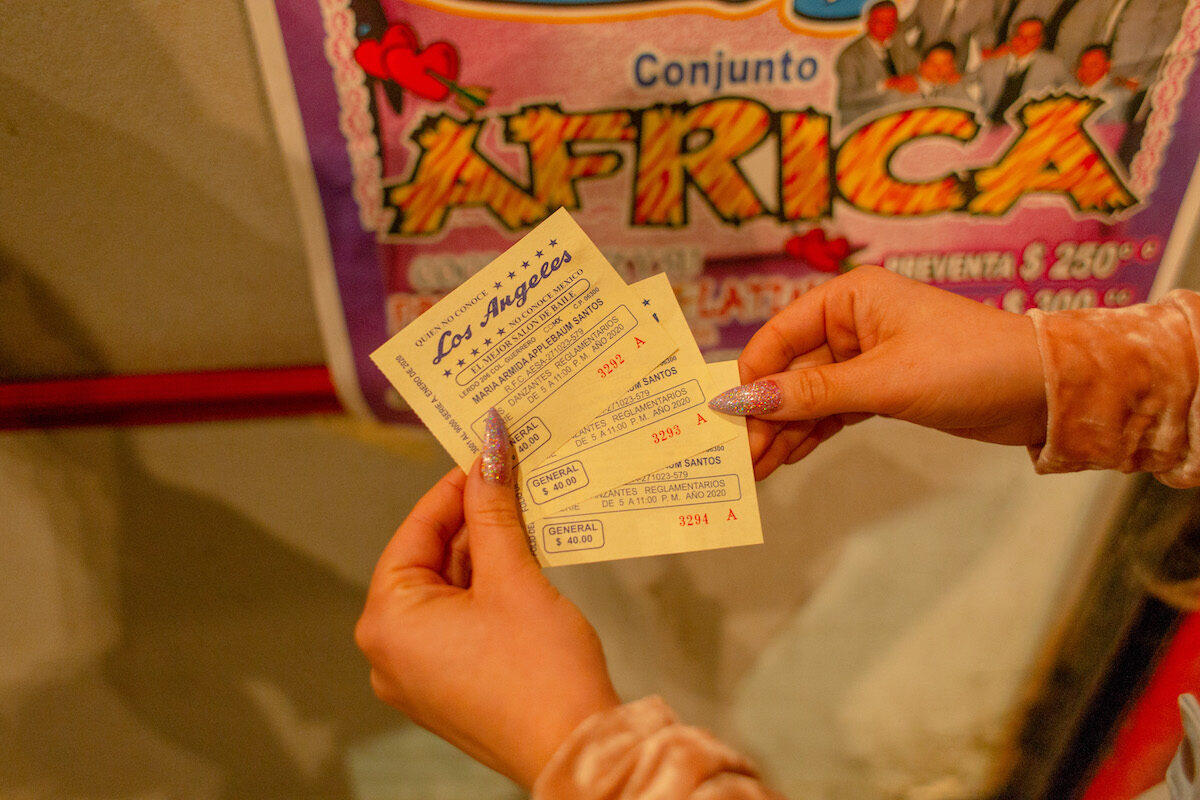 General admission. A CDMX guide for every type of traveler→ 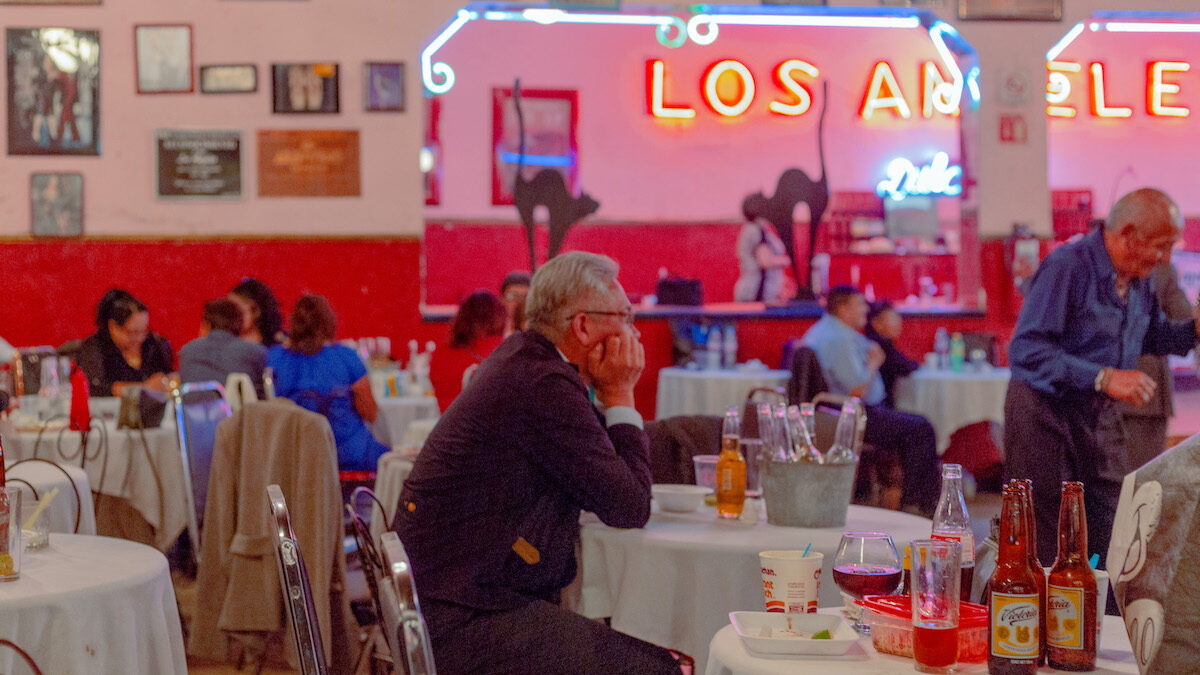 Waiting to join the next song at Salón Los Angeles.

Marisol’s hypothesis is that cumbia wasn’t selling as well in Colombia because it was a traditional, regional music. “It was like mariachi here. People didn’t think it was cool. In Mexico we made it danceable, singable, marketable. We put it in our fichera movies, our cabarets. And it became associated with the barrios.”

By the 1980s, there were huge outdoor cumbia parties called sonidos in the streets; Ricardo started one called Sonido Duende in 1975, and it became one of the most famous in the city.  “They would set up under overpasses, close the streets off with vinyl signage, and charge 10 pesos,” remembers Marisol. “They happened early. By 10 p.m. we’d be going for a torta.”

Sadly, by the 1990s Mexico City police were shutting them down, often violently, in full riot gear. “We called them robocops,” says Marisol. But cumbia never lost its popularity. It kept growing and morphing, giving and taking from other musical styles, and spreading through Latin America. 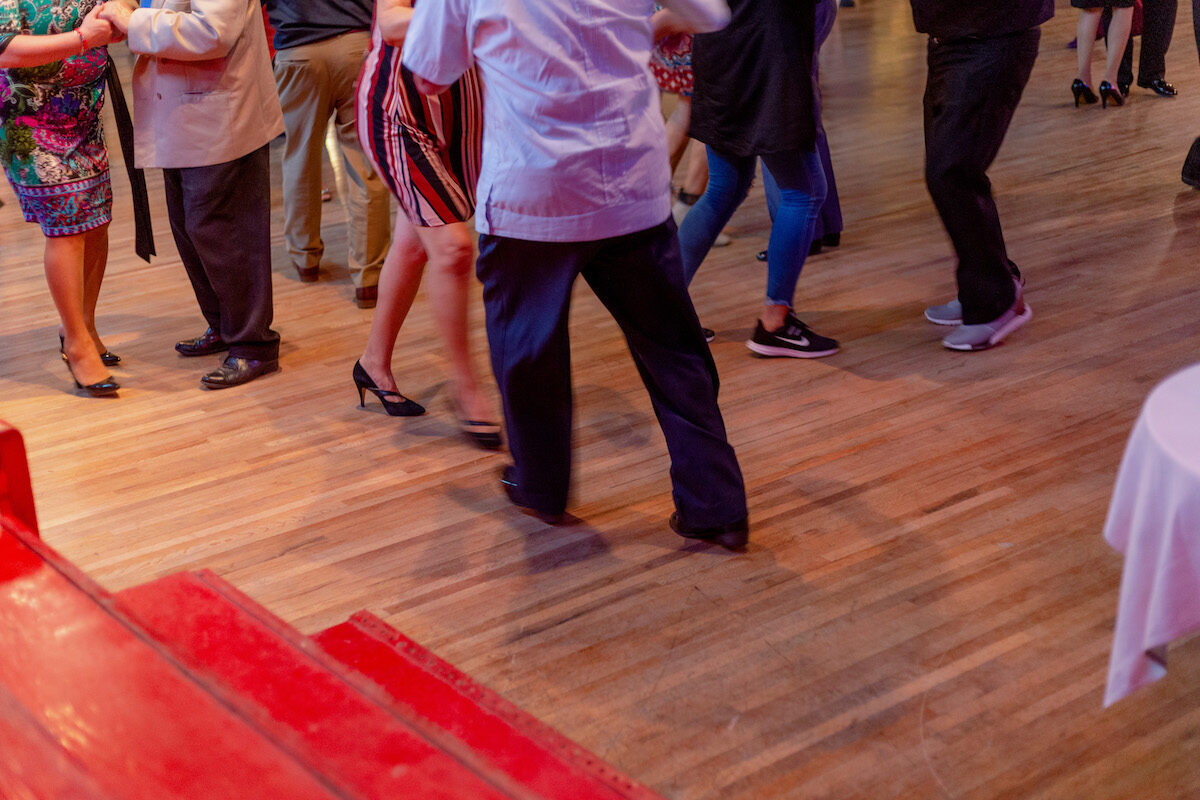 After a late night of dancing, here’s where to find Mexico City’s best street food→ 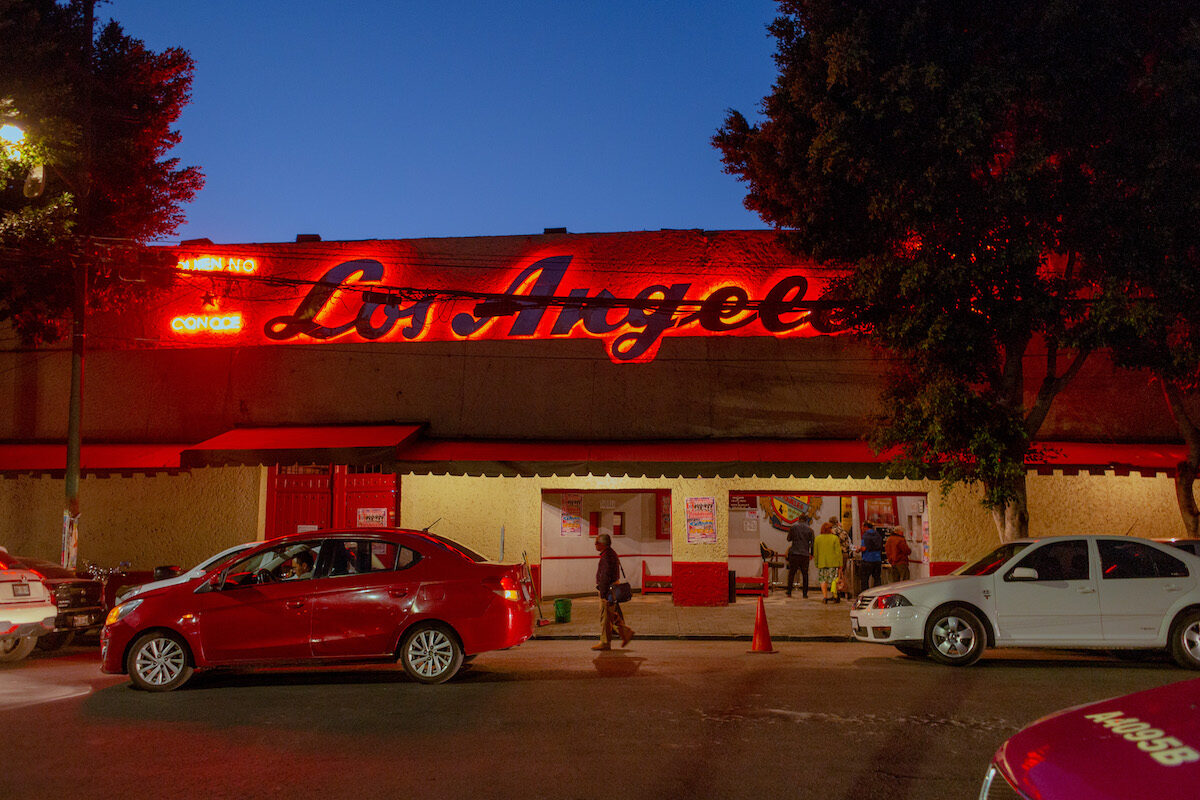 Now there’s chicha from Peru, villera from Argentina, wepa from San Luis Potosí in Mexico, electrocumbia from everywhere, and an endless supply of other localized and international styles of cumbia. In most new Mexican cumbia, Ricardo explains, “you can still hear remnants of Mexico’s original contributions to the genre: trumpets, synth, keyboard.”

In Mexico City today you can find live cumbia in dance salons, bars, and public parties like the ones at market anniversaries and outdoor church fairs. You usually hear a mix of cumbias from early classic to electro, depending on the DJ.

There are very few generalizations you can make about what it’s like to go dance cumbia, except that people actually ask one another to dance, and not with the end goal of eventually making out. Otherwise the contexts differ widely.

Sonido Gallo Negro is a cumbia band that plays around Mexico City and demonstrates the various styles the genre can take.

While it has always been and is still a working-class people’s music, in the last ten years it’s taken on a new status as part of Mexico’s cultural heritage. In February 2020, the López Obrador administration’s Secretary of Culture even released a statement saying that they were planning a series of activities and programs to promote sonideros in Mexico City.

Now, Las Musas Sonideras don’t only play clubs and parties. They also play at museums, cultural centers, and art week events where gringos in fancy clothes stand around looking amazing and not dancing, while Marisol makes fun of them in Spanish over the mic: “I think I’m the only person in here that speaks Spanish!”

The first time Marisol played at the hipster bar La Chicha in La Roma, her friend said, “Really, you’re going to send saludos here?!” Saludos refers to when the sonideros shout out the names of dance groups that come to see them, the people they know, the people who they wish were there but aren’t, their barrios, and any name that someone writes on scrap paper and hands to them over the DJ booth. It’s a sonido staple. Her friend pointed out that the venue represented a new context for Marisol’s medium. “It’s a new public that’s showing up to see Marisol,” Ricardo agrees.

Still, Marisol always sends saludos. Even if you scribble down 17 names in barely legible handwriting on a napkin, like my husband does. She will send them all out for you. 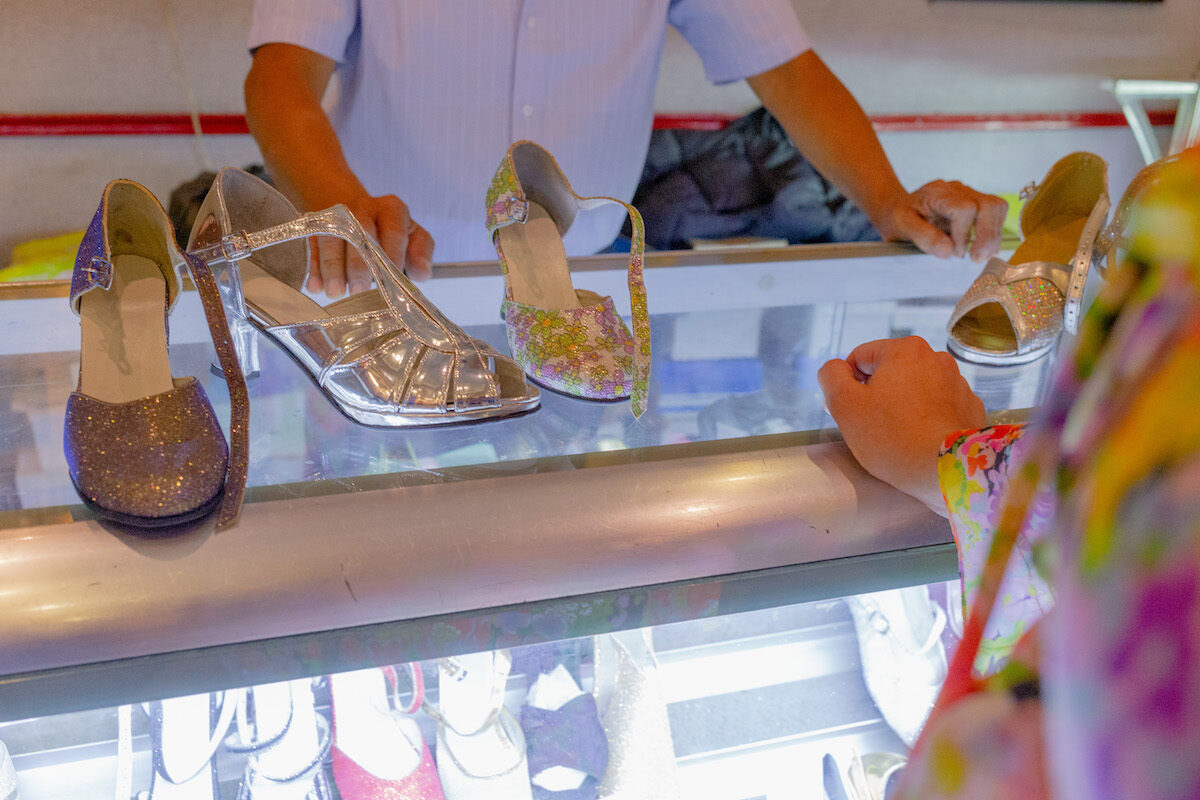 Put on your dancing shoes. Here's how to spend a day in Mexico City on any budget→ 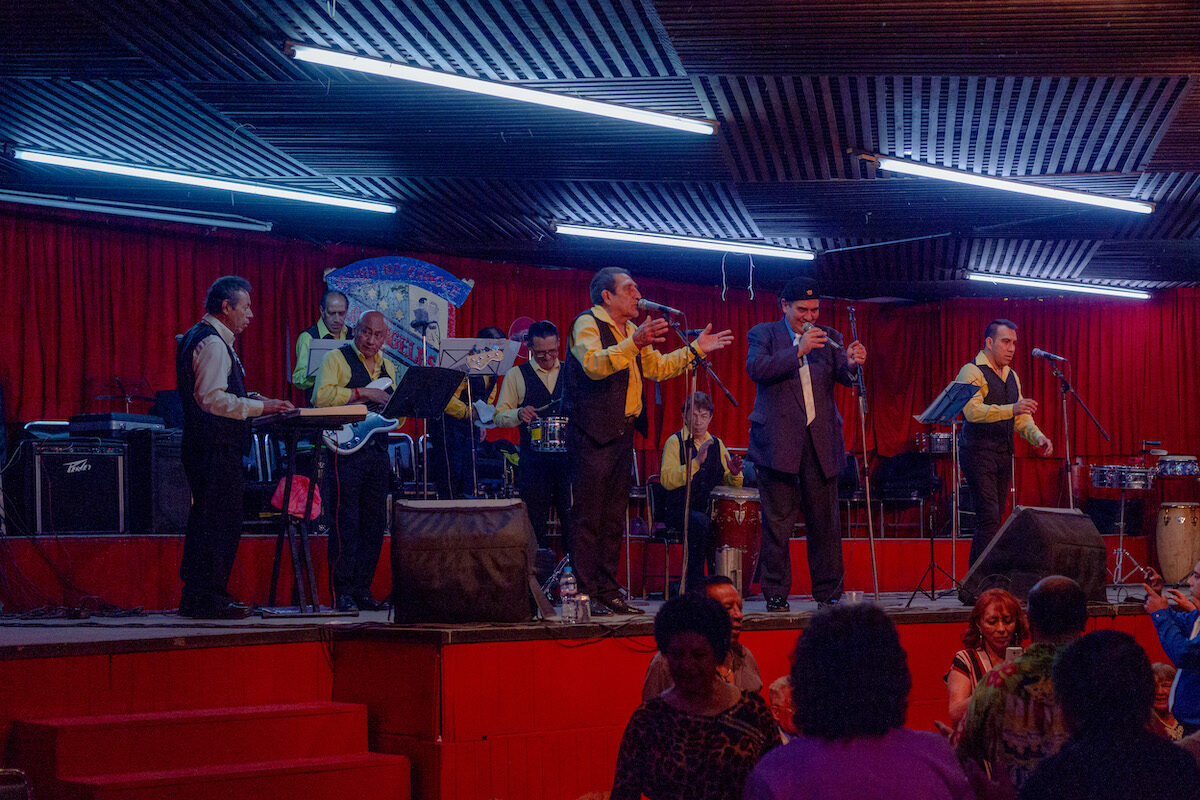 Where to Dance Cumbia in Mexico City

This place feels like a community center, with bright lights and lots of space to dance. It is uninterested in being cool. There are fans blowing cool air, the alcohol is reasonably priced, and everybody dances. Check their Facebook page to see when cumbia bands are playing.

This place is a grimy, crowded, sweaty pulquería. (Pulque is a very nutritious and delicious but sort of mucus-like pre-Hispanic alcoholic beverage.) Tuesday nights from 6:30–9:00 they have an amazing house cumbia band.

This is a formal dance salon and not-so-former fichera club, which means that yes, some of the women you see around you may be getting paid to…dance. Don’t wear shorts or bring a backpack. Do bring an ID. You have to get a table, and the drinks are not cheap. But the interior is gorgeous: all red velvet, straight out of the ’70s, and the live bands play a mix of salsa, rumba, and cumbia all night every night except Sunday.

Their slogan is “If you haven’t been here, you haven’t been to Mexico.” And it’s kind of true! A proper dance salon, the crowd is mostly in their 50s and 60s. You can get a glimpse of Mexico’s pachucos—suit-wearing dance groups—and learn to dance from the real OGs.

Another way to find cumbia is to follow sonideros and cumbia bands on Facebook. Here are a few that frequently play shows around the city:

A version of this story originally appeared in issue 12 of Here Magazine, where we also explored the punk scene in London and the underground hip hop culture of Tokyo.