Support these special artists by learning more about their would-be exhibitions at the world’s most ground-breaking contemporary art galleries.

Some of the most eye-opening travel experiences we can have occur at local, independent art galleries that offer the cutting edge in how artists are interpreting the world around them—nothing beats stumbling upon the next James Turrell or Yayoi Kusama and then following their careers to full-blown fame. These are the kind of art relationships that last a lifetime.

Unfortunately artists from all over have had their gallery shows canceled due to the COVID-19 crisis, so we’ve rounded up the best would-be art shows featuring emerging and under-the-radar artists from some of the most important independent galleries around the world so that you might support their work from afar.

Though the context of just about everything seems to be taking shape around our current crisis, let this serve as a reminder that art has always helped us process and cope with some of the world’s biggest struggles and historic events, from the French Revolution to the most famous art heist in Argentina.

Jiménez’s first solo show at the award-winning Mariane Ibrahim Gallery, dates now “to be announced,” is a series of large-scale collage works that explore queerness and physicality in the Black male body. Jiménez, whose own father was a boxer, reconstructs male boxer and bodybuilder motifs to challenge Western art historical interpretations of the male figure. “I want to be  a storyteller for people who look like me. The people whose stories have been marginalized and ignored,” says Jiménez, “What I want to do is be the person that I needed when growing up—someone who depicts the complexities of Black life, what it means to be queer, and how it is OK. I aim to provide greater representation of my people within the art historical canon.” 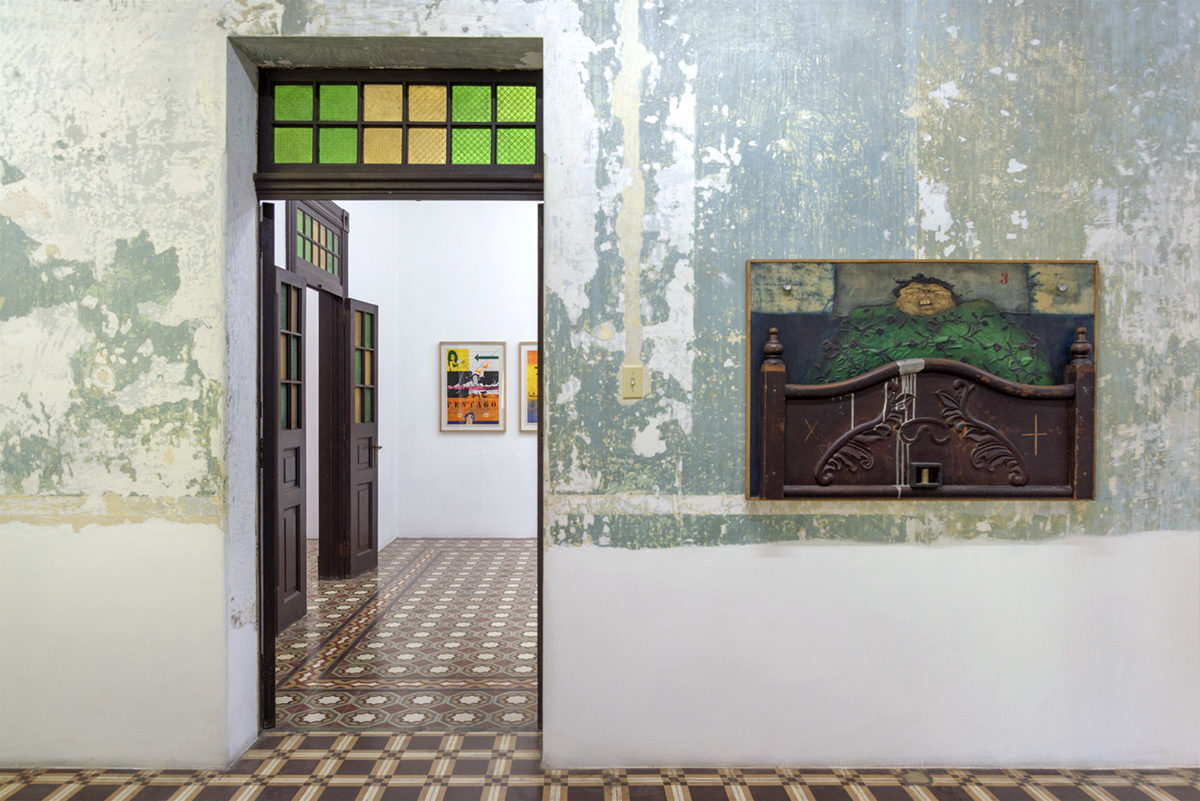 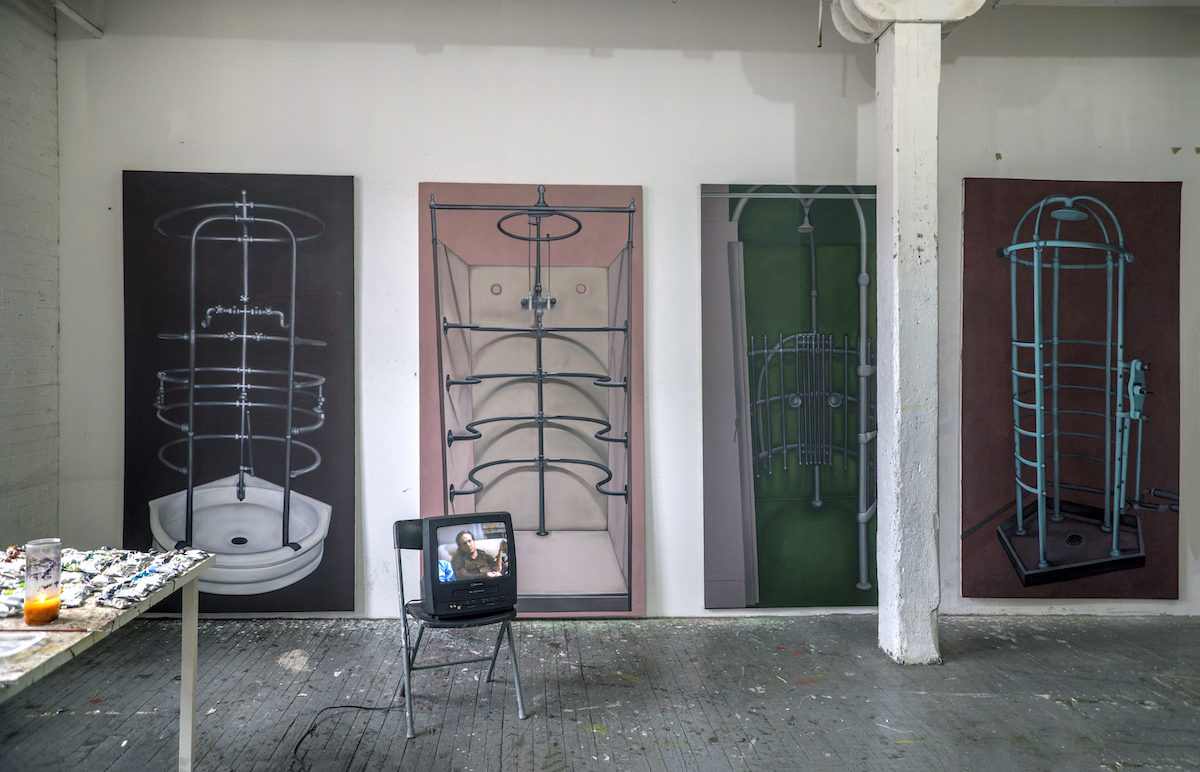 Originally from St. Louis, Missouri, Megan Marrin is a painter and sculpture artist currently working in New York. Convalescence explores themes of rest, healing, and recovery through painted depictions of rib cage showers, the first modern showers built in the 1920s that apply jets of water to specific parts of the body, like the kidney area, ribcage, liver, or spine. Fortunately, two of Marrin’s paintings are currently viewable online via David Zwirner’s Platform New York project, and will culminate in a full viewing at Queer Thoughts at a later date. 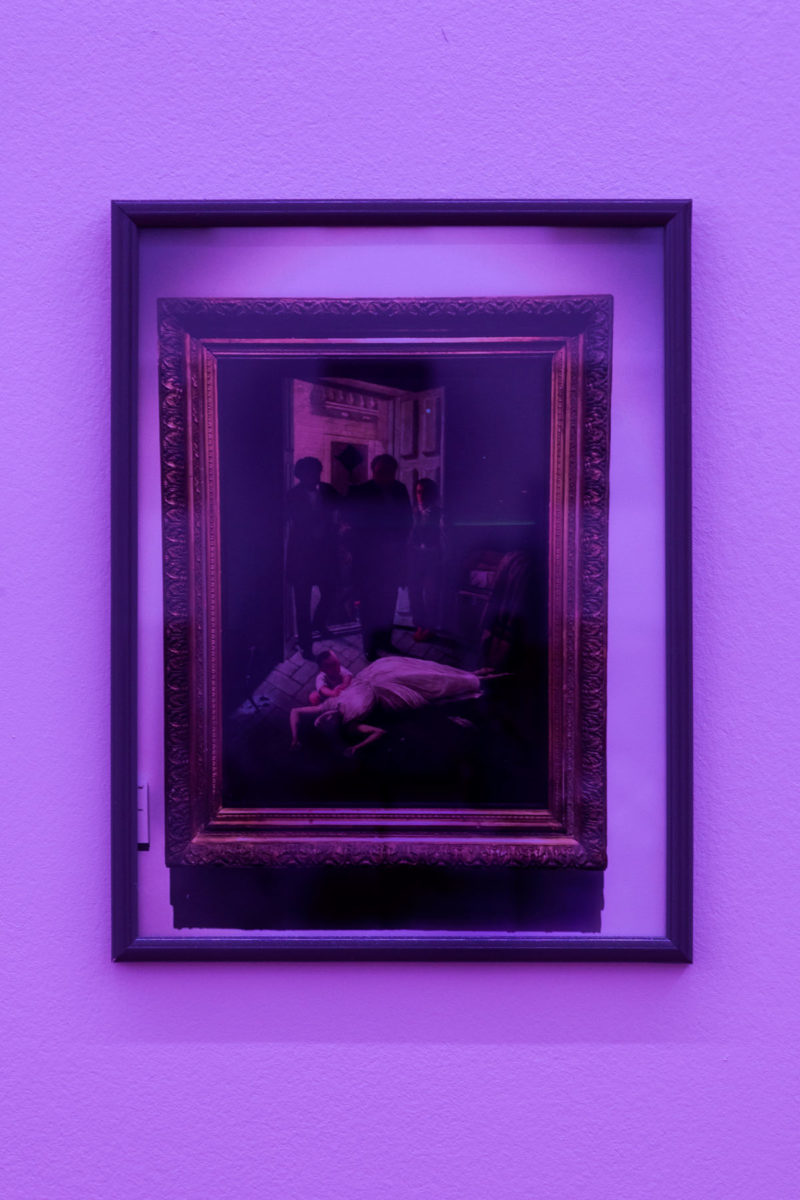 A reproduction of Juan Manuel Blanes' An episode of yellow fever. A small sketch of a much larger version of the painting was taken from the museum along with more famous works from the National Museum of Fine Arts in Buenos Aires. Its whereabouts are still unknown along with the reason why the relatively less valuable piece was stolen. 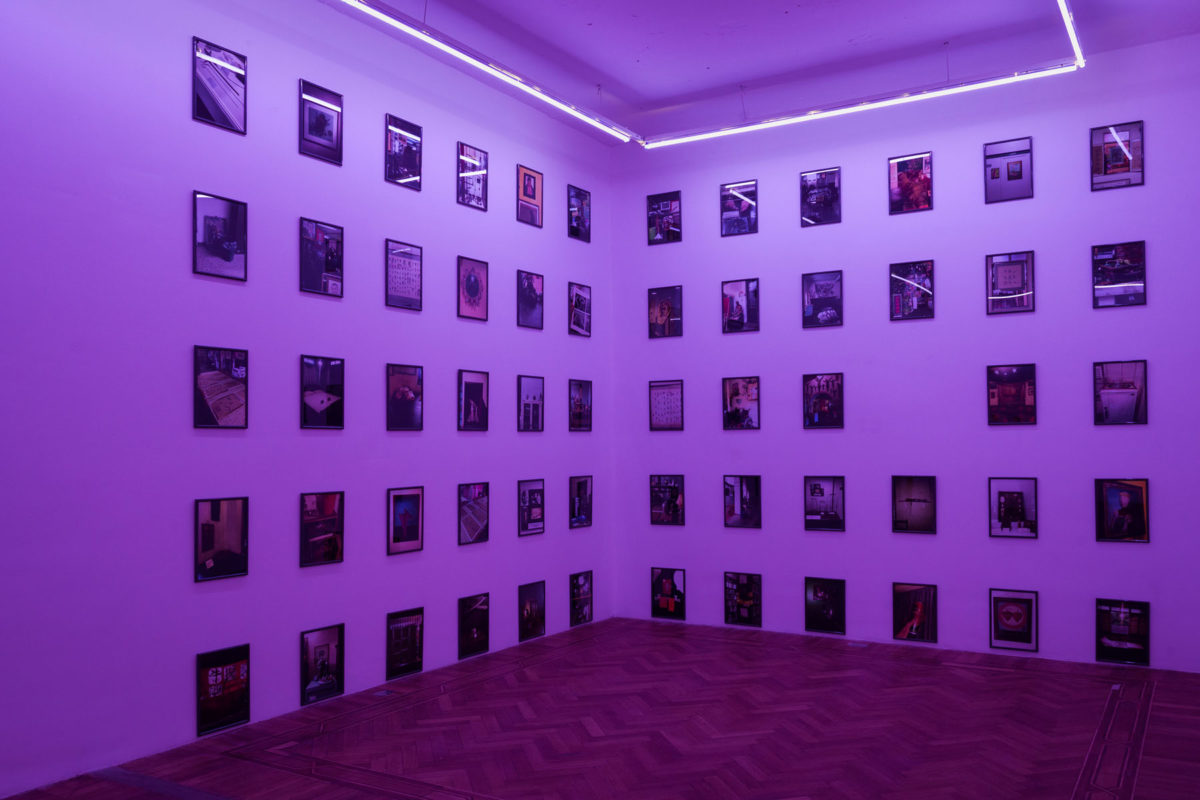 View of the immersive insallation at Isla Flotante, which presents artifacts from the investigation of a famous art heist at the National Museum of Fine Arts in Buenos Aires. 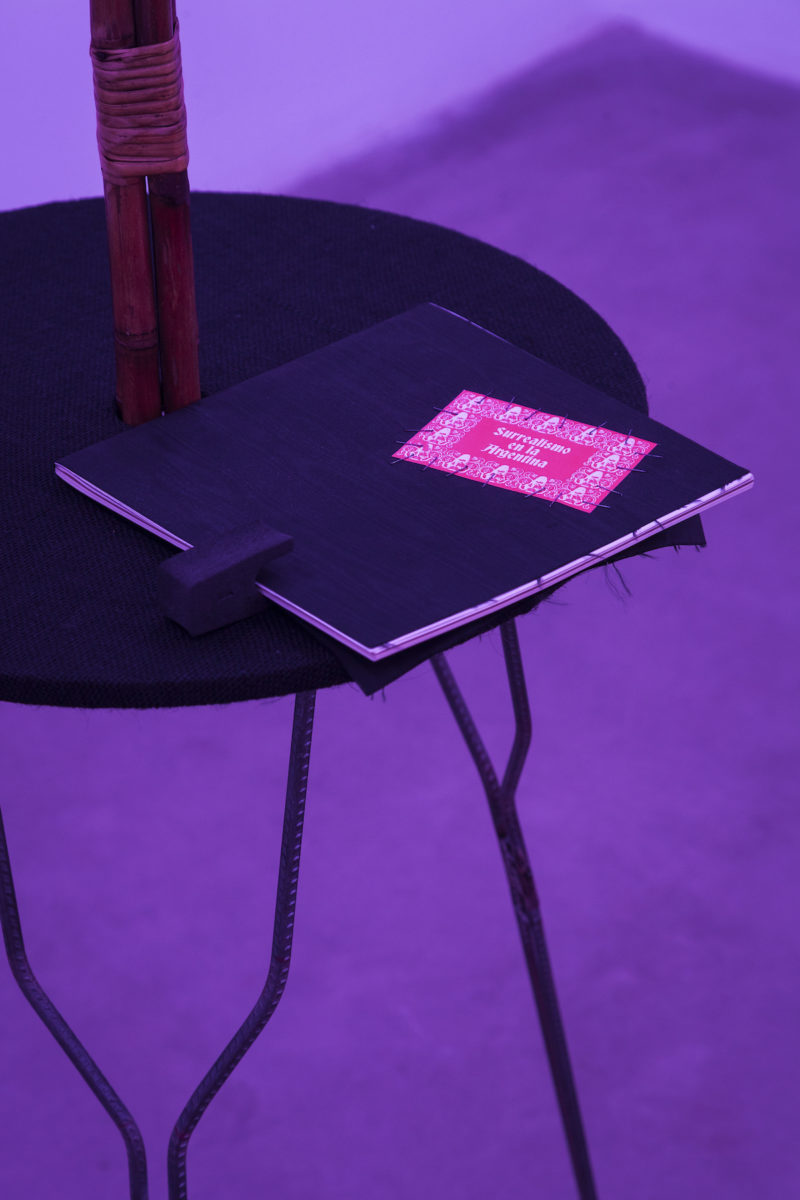 A case file that was opened in 2002 when three of the works that went missing in 1980 reappeared in a gallery in Paris and were later returned to the Museum of Fine Arts in Buenos Aires.

On Christmas day 1980, several important works by Cezanne, Picasso, Gauguin, and more were stolen from the National Museum of Fine Arts in Buenos Aires in what was believed to be an exchange for weapons to combat the country’s military dictatorship at the time. This exhibition at Isla Flotante presents materials from the case to uncover what really happened during Argentina’s most famous art heist, and challenges the implications of a National Museum that coddles the artistic taste of aristocracy. 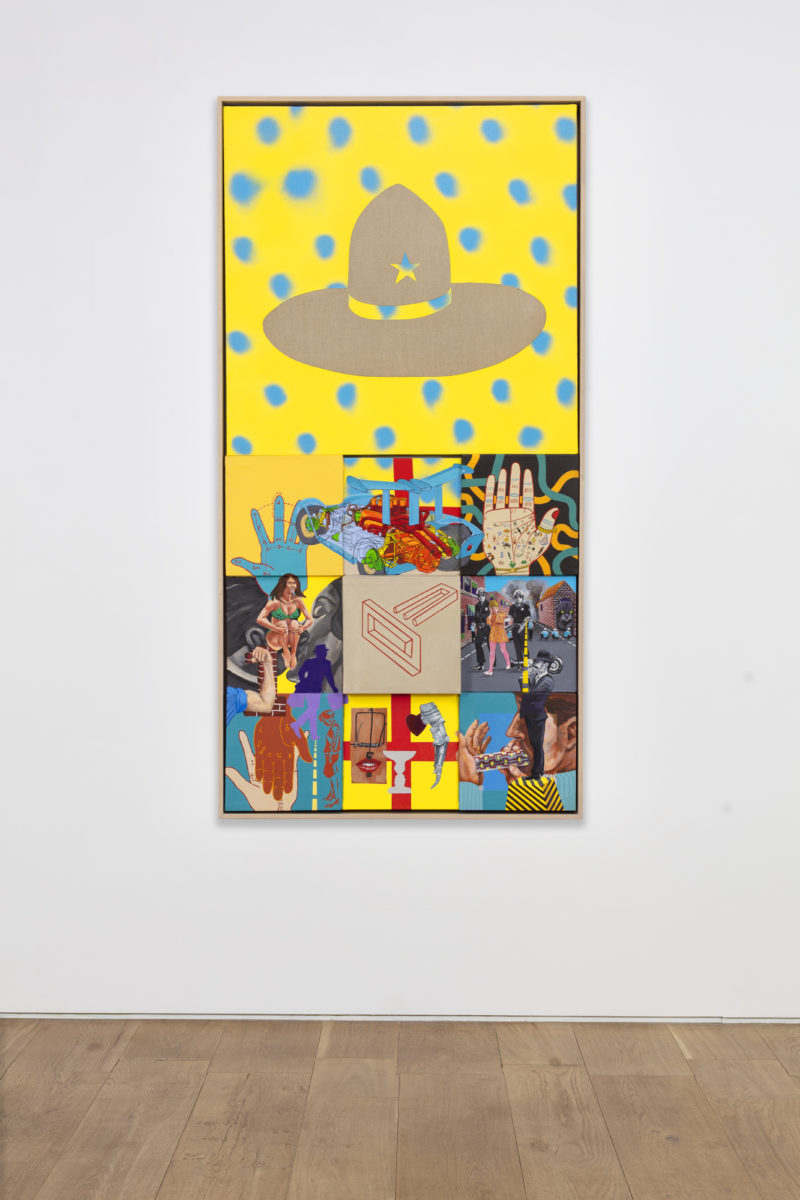 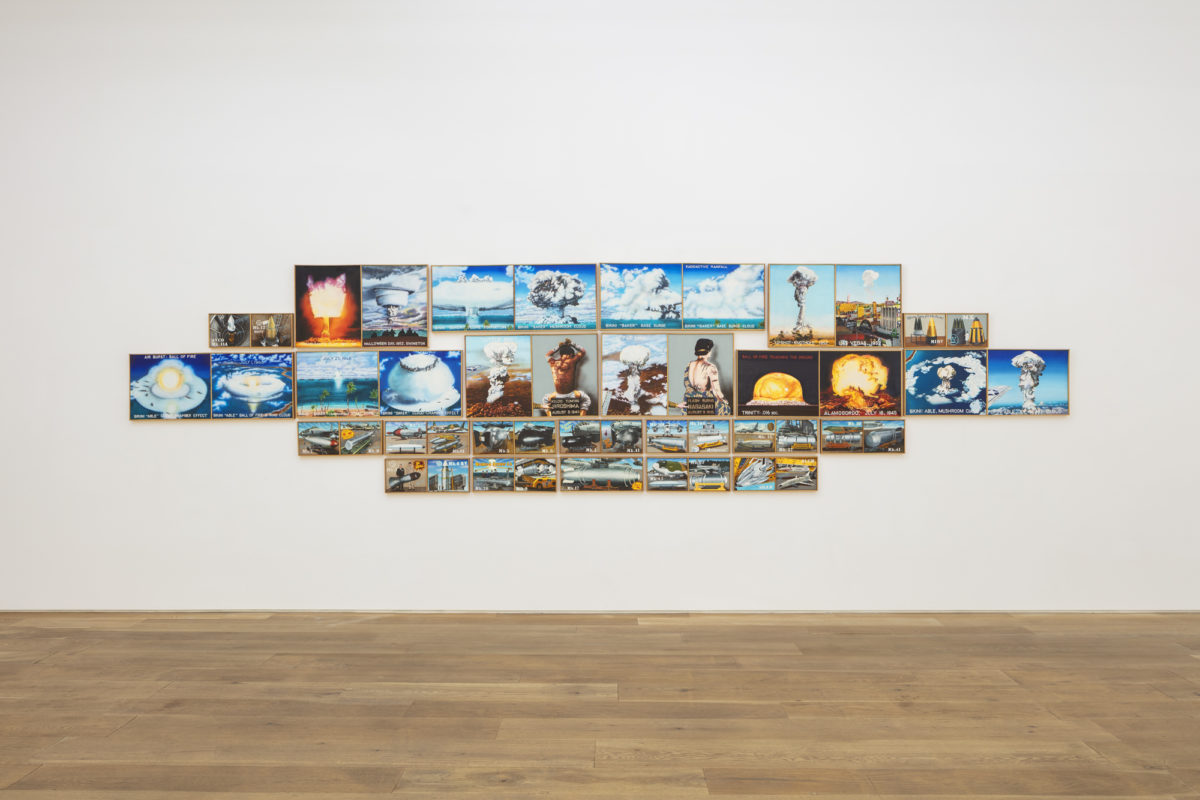 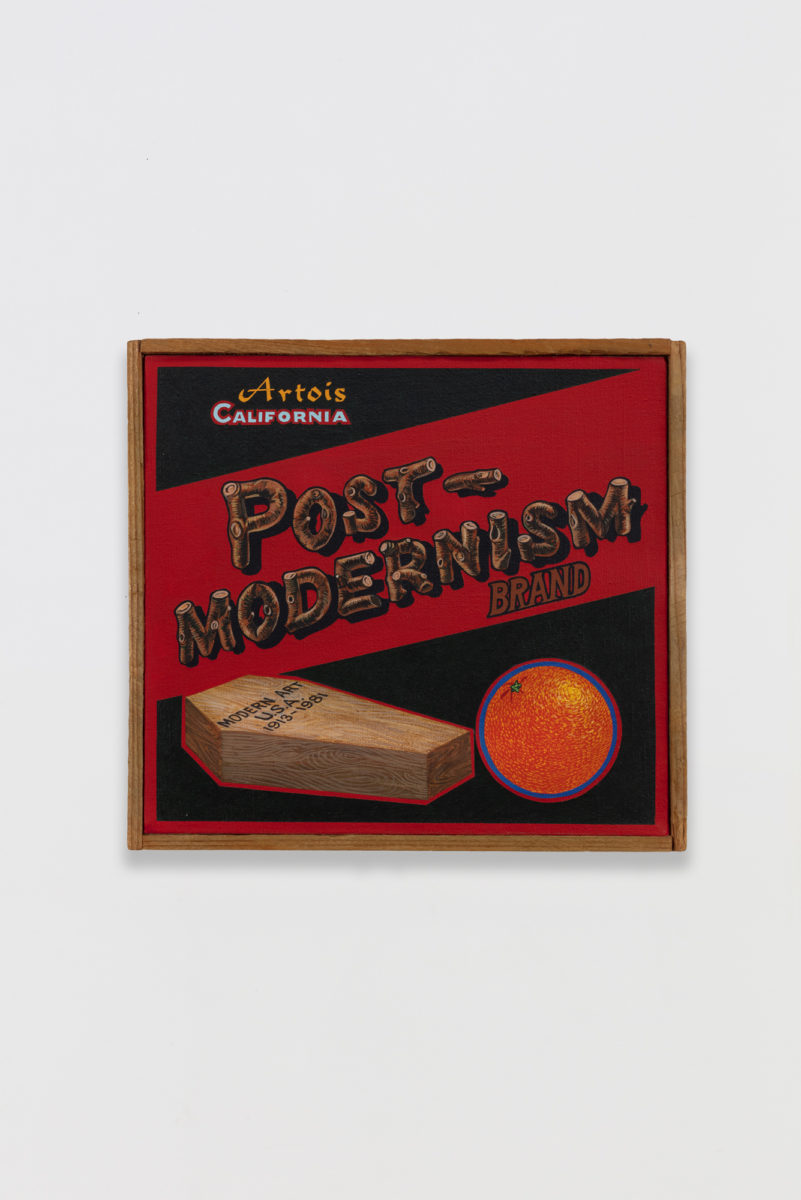 Ben Sakoguchi is a pop art painter born in Pasadena, California, in 1983. His work critiques “American cultural values and ahistorical Californian idealism,” informed by his own biography as a Japanese-American citizen during World War II, when he and his family were incarcerated in an internment camp. This exhibition features work from his Orange Crate Labels series, that directly confronts the “Orange Empire” of the San Bernardino Valley through acrylic-on-canvas works that “repackage objects of satire in the language of fresh produce, ripe for the selling,” invoking “dark commentary on the bounty of the Golden State.” The exhibition also features works from Sakoguchi’s Bombs, a series of paintings that draw on scientific and clinical research imagery produced by the U.S. military as “a searing indictment of nuclear armament.” 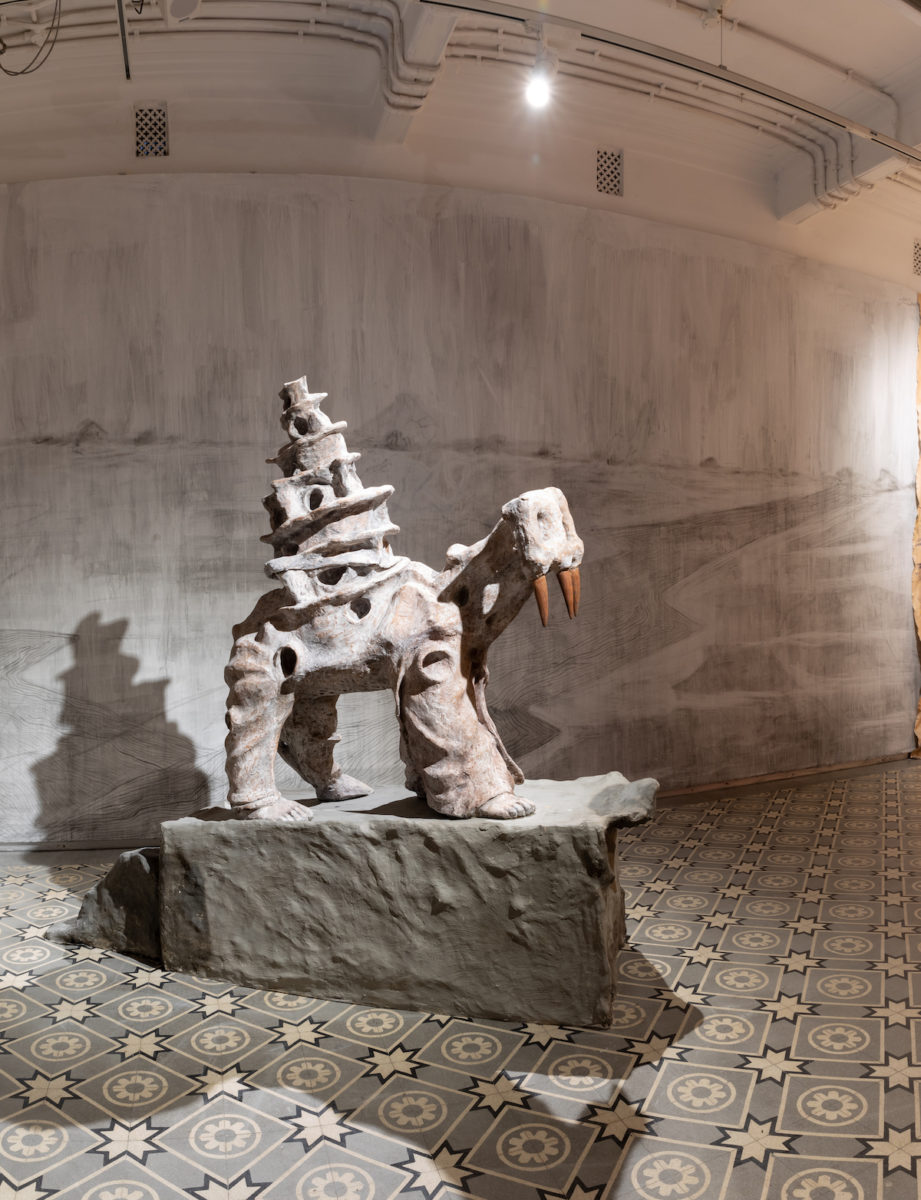 A March Against the Lie II by Prabhakar Pachpute at Experimenter Gallery in Kolkata. 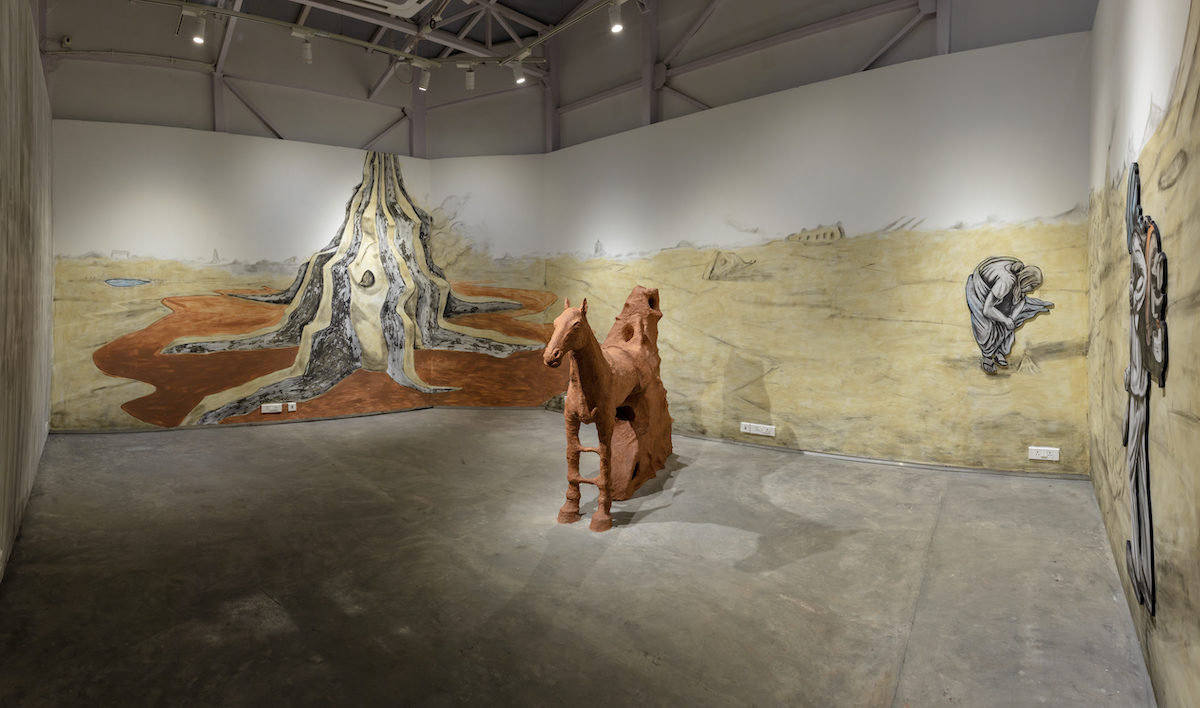 Installation view of Beneath the Palpable, Prabhakar Pachpute’s solo exhibition at Experimenter Gallery in Kolkata. 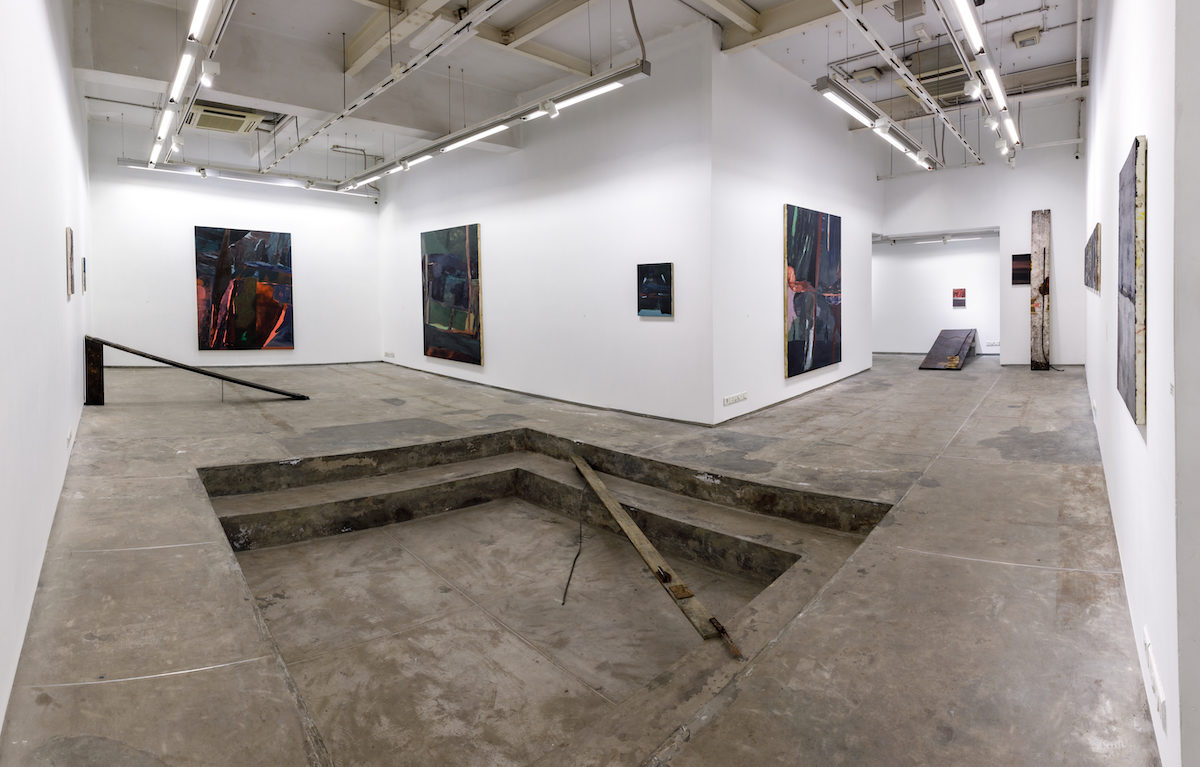 Installation view of Stone is a Forehead by Biraaj Dodiya at Experimenter Gallery in Kolkata. 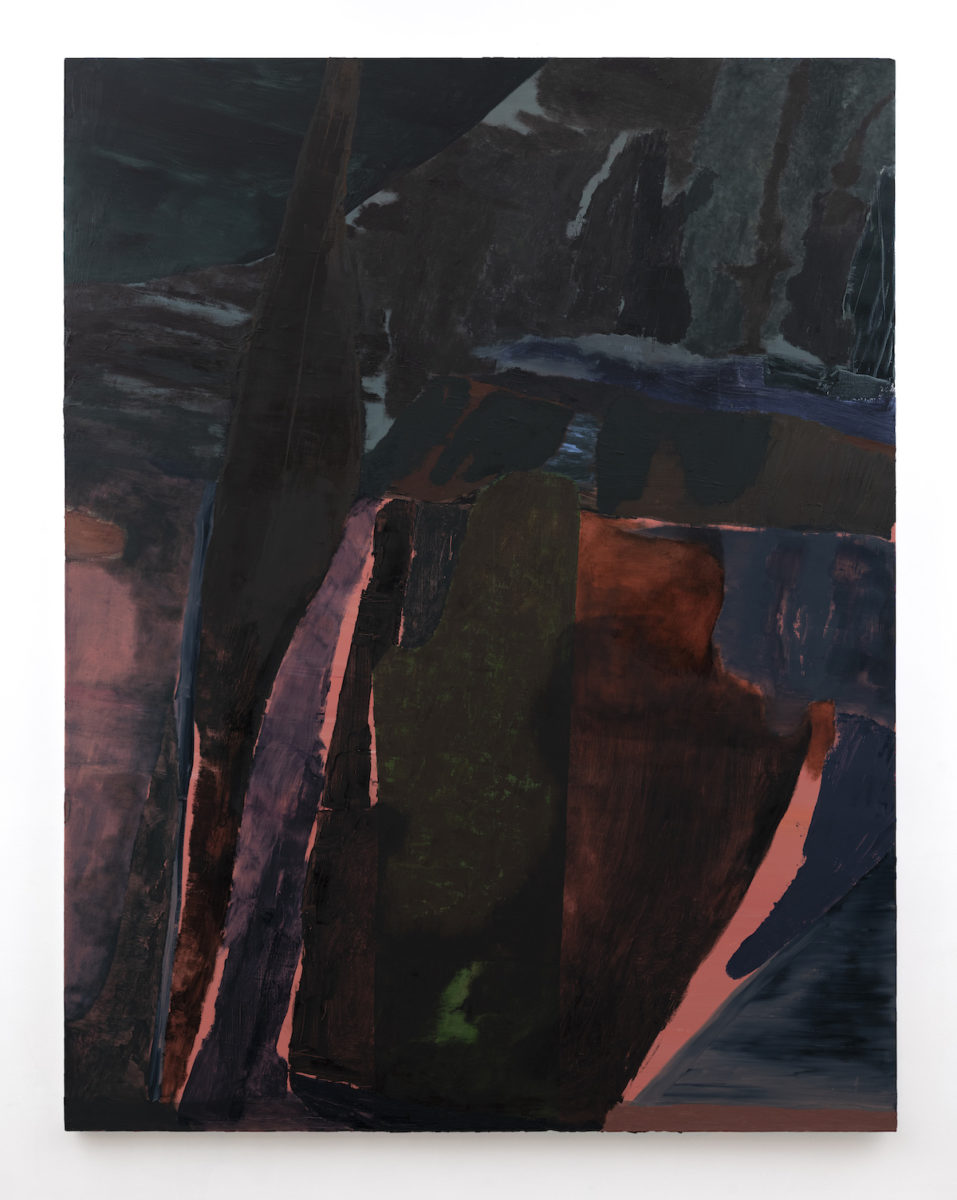 6. Prabhakar Pachpute: Beneath the Palpable & Biraaj Dodiya: Stone is a Forehead

Experimenter Gallery is run by a husband-wife duo that has become a force in the Central Asian art world in the last decade. Their two exhibition spaces in Kolkata were scheduled to run Prabhakar Pachpute’s exploration of “human conflicts with nature” through large-scale sculptures, paintings, and installation in Beneath the Palpable, as well as Biraaj Dodiya’s debut solo exhibition Stone is a Forehead, which presents paintings and sculptures as a form of excavation, confronting both loss and coming of age, in a space that quite literally resembles an excavated construction site. 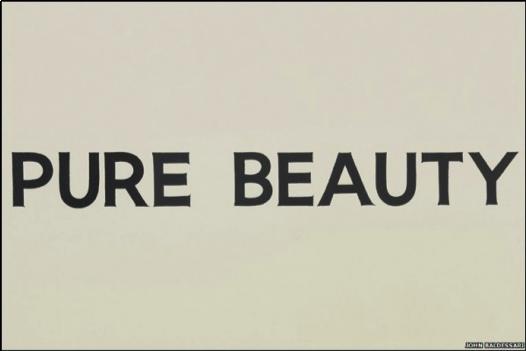 Galleries in China have of course been in the throws of this crisis much longer than other parts of the world, and thus many haven’t scheduled new exhibitions for 2020. But Bank Gallery in Shanghai notably produced an online exhibition in response to the crisis with the hopes of bringing light into the lives of people confined to their homes and to honor Chinese artists lost to COVID-19. Pure Beauty “presents works ranging from the sublime to the mundane that examine, not only how the idea of beauty has been shaped and developed historically, but how it as is complex and multifaceted as the metamorphosing virus that scientists around the world are currently trying to extinguish,” says the gallery in a statement on their Instagram. The title of the exhibition references the famous work by John Baldessari, in which the artist hired a sign painter to inscribe black capital letters on a blank canvas spelling out “PURE BEAUTY,” a simplified yet conceptual exchange between art and the viewer. You can view the exhibition in chapters via the links below: 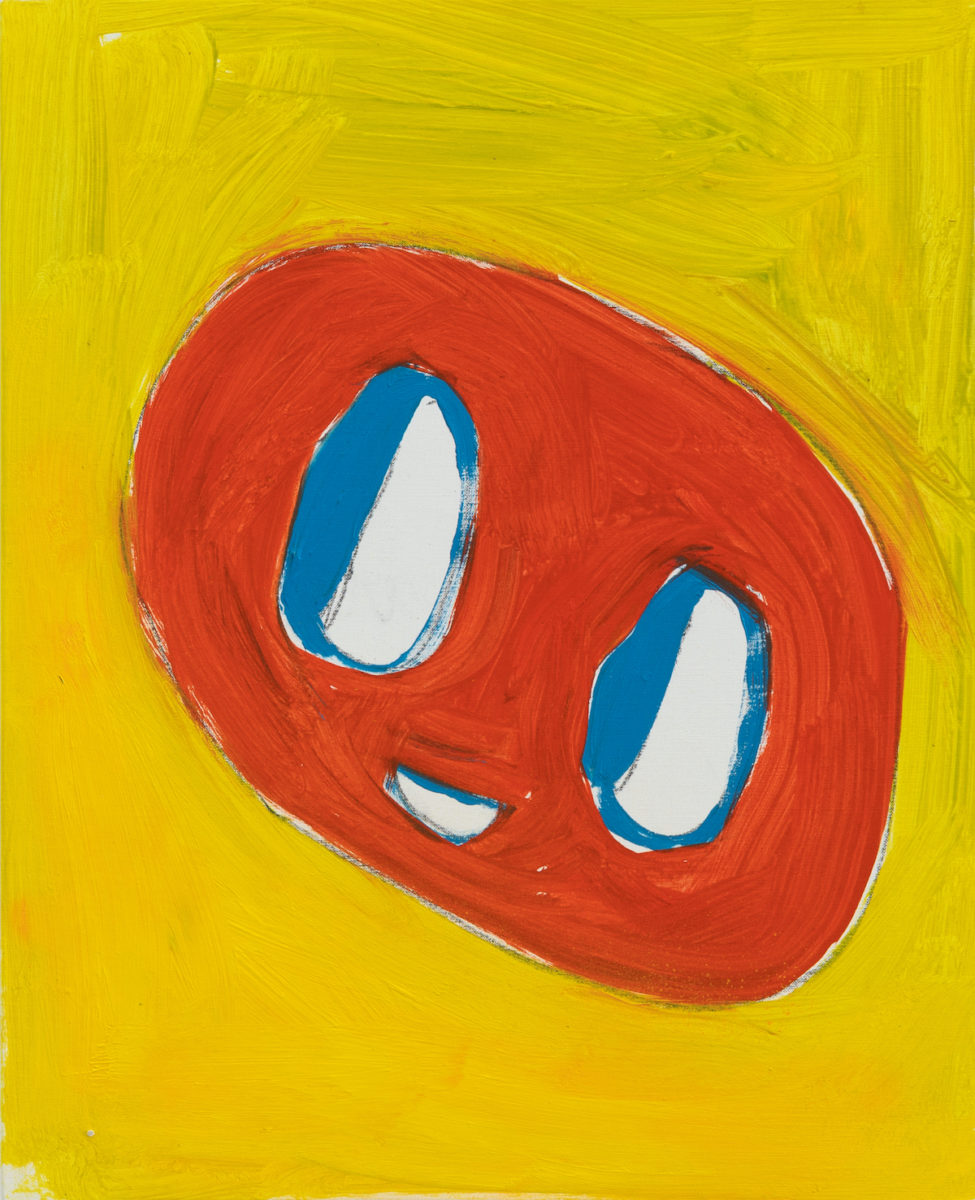 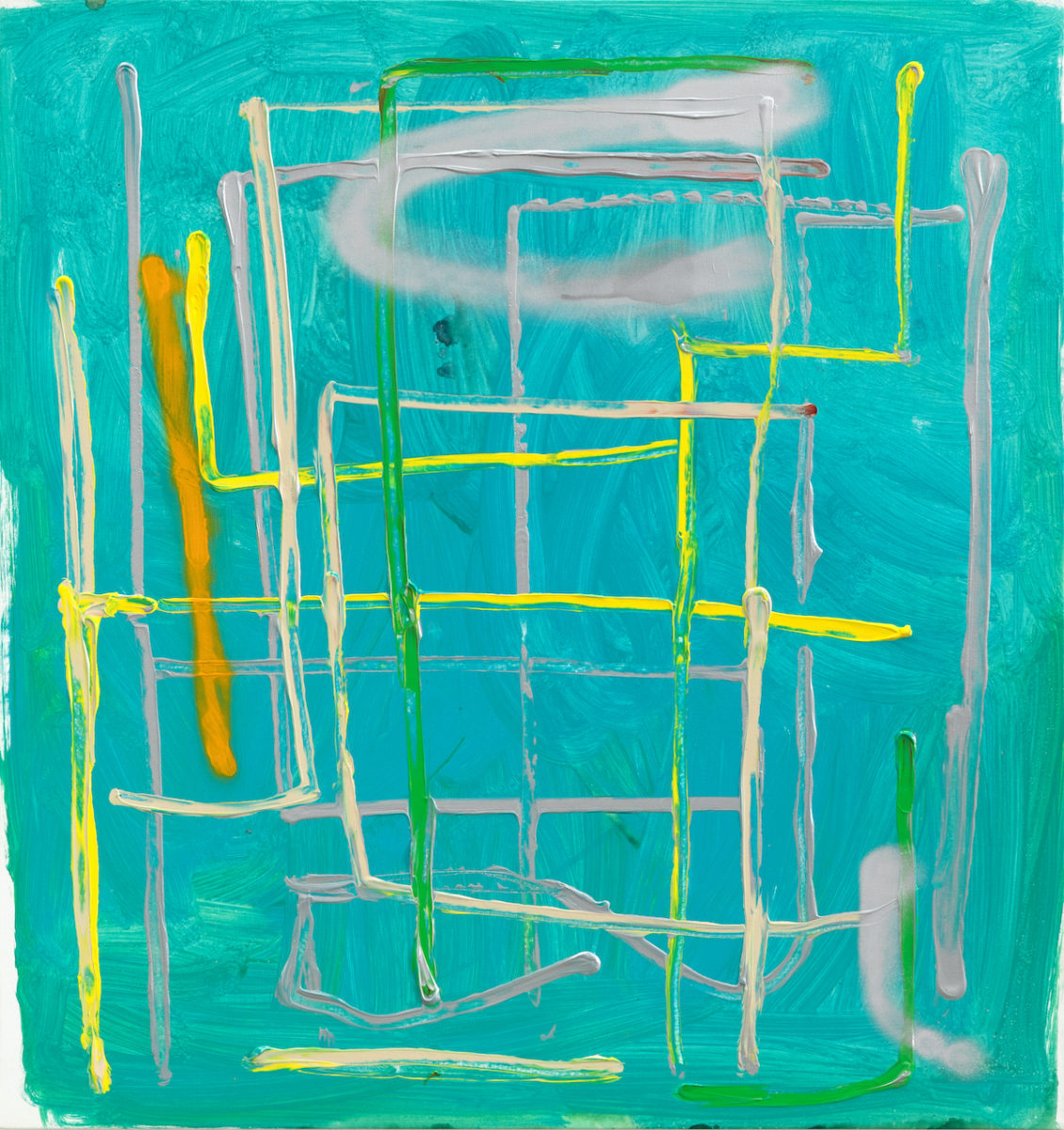 André Butzer’s 4th solo exhibition presents the artist’s newest series of paintings, which explore beautiful ranges of color. Known for playful abstractions of comics and science fiction motifs, Butzer is an acclaimed artist from Germany who graduated from Hamburg’s Akademie Isotrop in 2000 and has had solo shows in galleries from Munich to Santa Monica. As for Carbon 12, the Dubai gallery is credited with catalyzing the Middle Eastern city’s contemporary art scene by opening the first such space in 2008. The neighborhood surrounding the gallery has since exploded into a contemporary art hub, hosting premier art fairs such as Art Dubai and Alserkal Art Week. You can view Butzer’s exhibition through Carbon 12’s 3D space online. 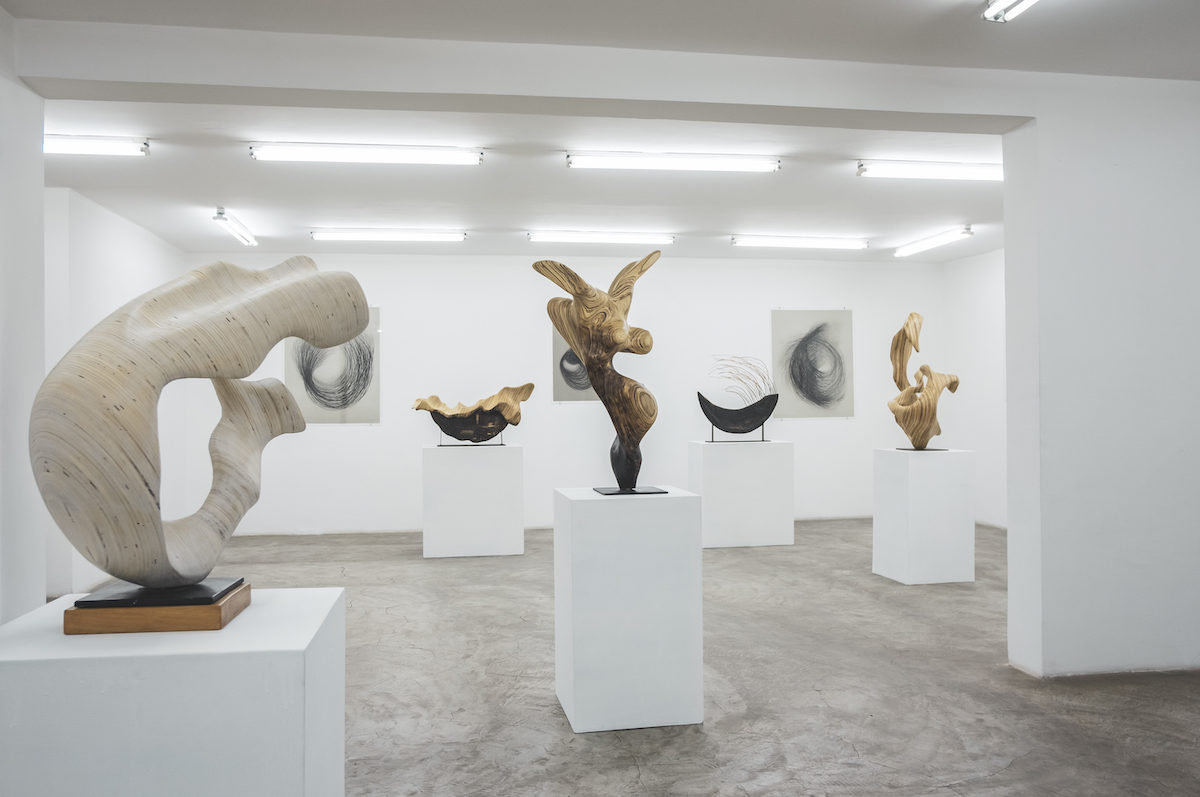 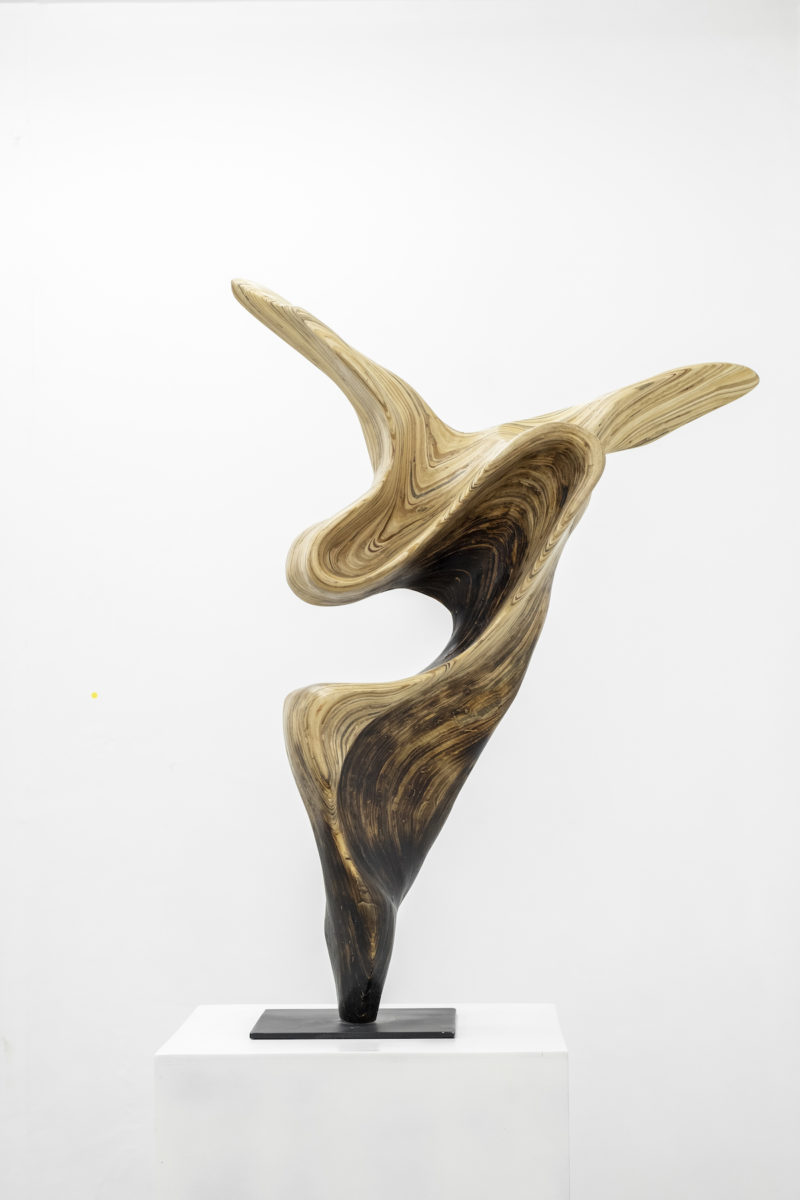 Liberty by Adiskidan Ambaye. Made of plywood.

Liberty presents Adiskidan Ambaye’s complexly constructed plywood sculptures that render beautiful, organic-seeming abstract figures that call to mind a tree trunk’s symbolism of time, life, and death in nature. The works are presented alongside the Ethiopian artist’s sketches and charcoal works on paper, the two practices of which are deeply interwoven for the artist. Addis Fine Art was founded in 2016 and is the city’s first gallery to focus on contemporary Ethiopian art and its diaspora. 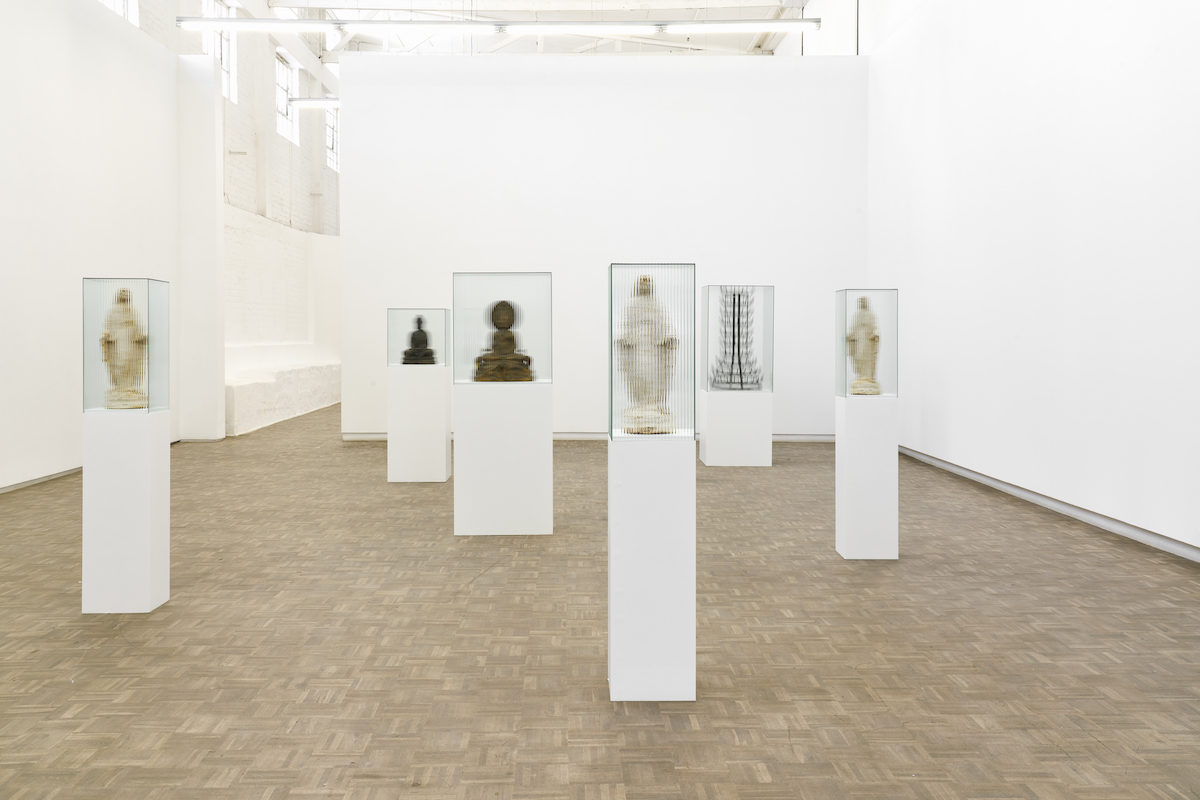 James Webb's This Is Where I Leave You installation view at Blank Projects in Cape Town. A series of found objects from the Nossa Senhora dos Milagros shipwreck 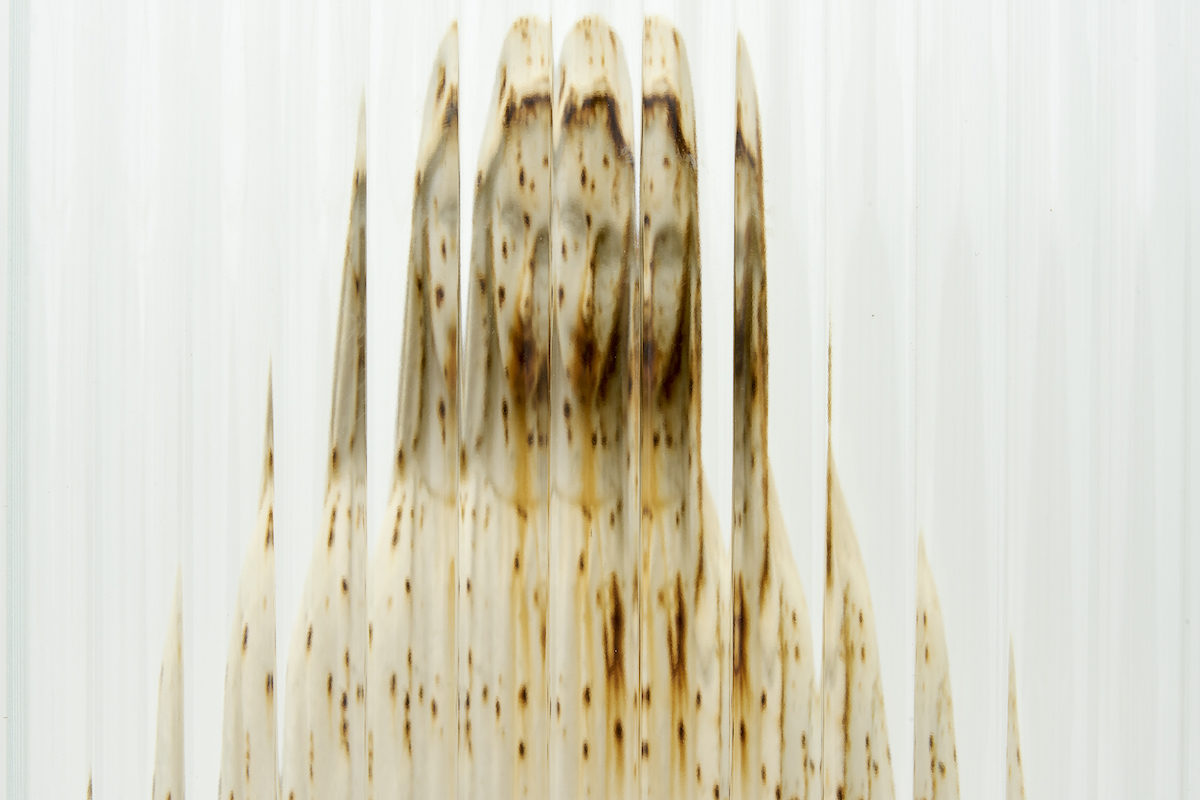 Detail of This Is Where I Leave You by James Webb. The effect of the fluted glass fragments our vision of the piece. 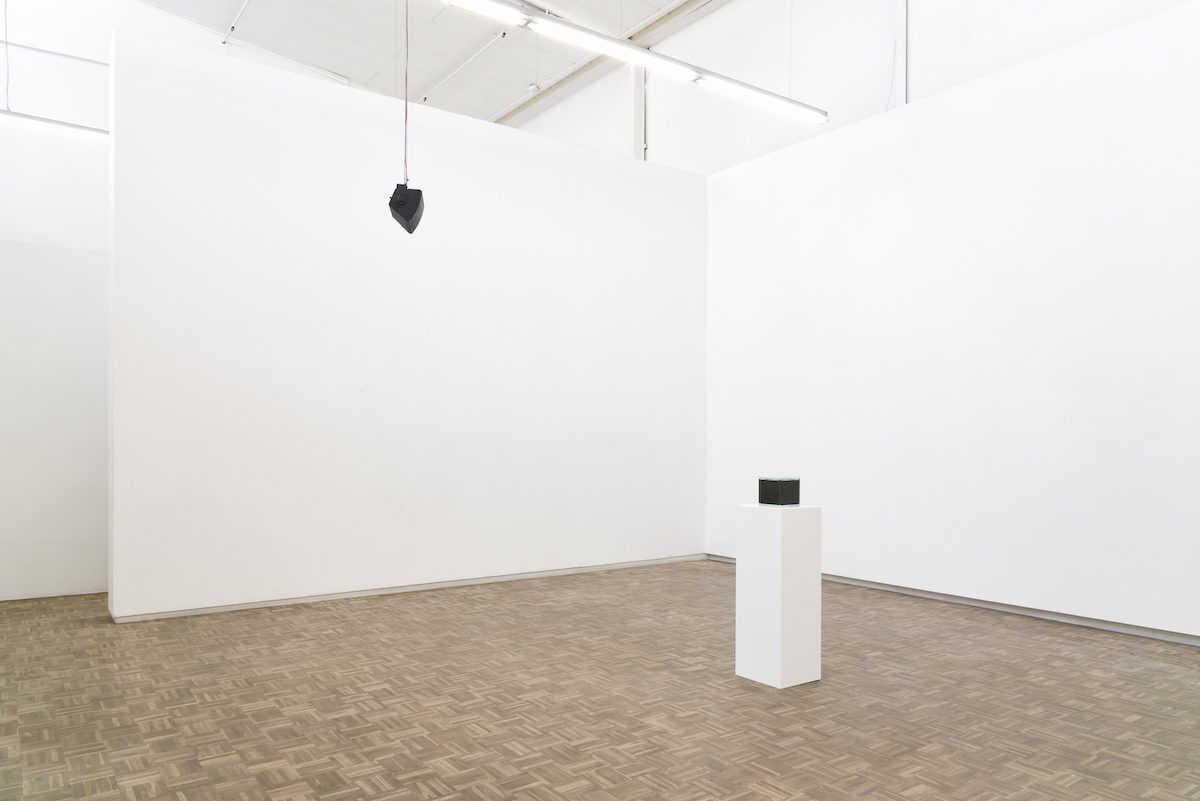 James Webb's A series of personal questions addressed to five litres of Nigerian crude oil. A loudspeaker directs questions to the inanimate object such as "How old are you?" and "What do you remember of prehistoric sunlight?"

10. James Webb: What Fresh Hell Is This

The aptly-titled solo show gathers James Webb’s most recent “conceptual, visual, and sonic works,” through a series of installations “exploring the relationships between frustration, disruption, and belief,” according to the gallery text. One installation is an abstract reconstruction of a 1686 shipwreck tale that is thought to be the Cape’s first recorded arrival of Buddhism in South Africa. The exhibition approaches the story “as a case study, considering belief not only as a religious instrument, but also as a transitory historical, political, and sociological technology used in the construction of societies and individuals,” says the gallery text. “This exhibition questions what happens when these belief systems overlap, unfurl, or fray.” 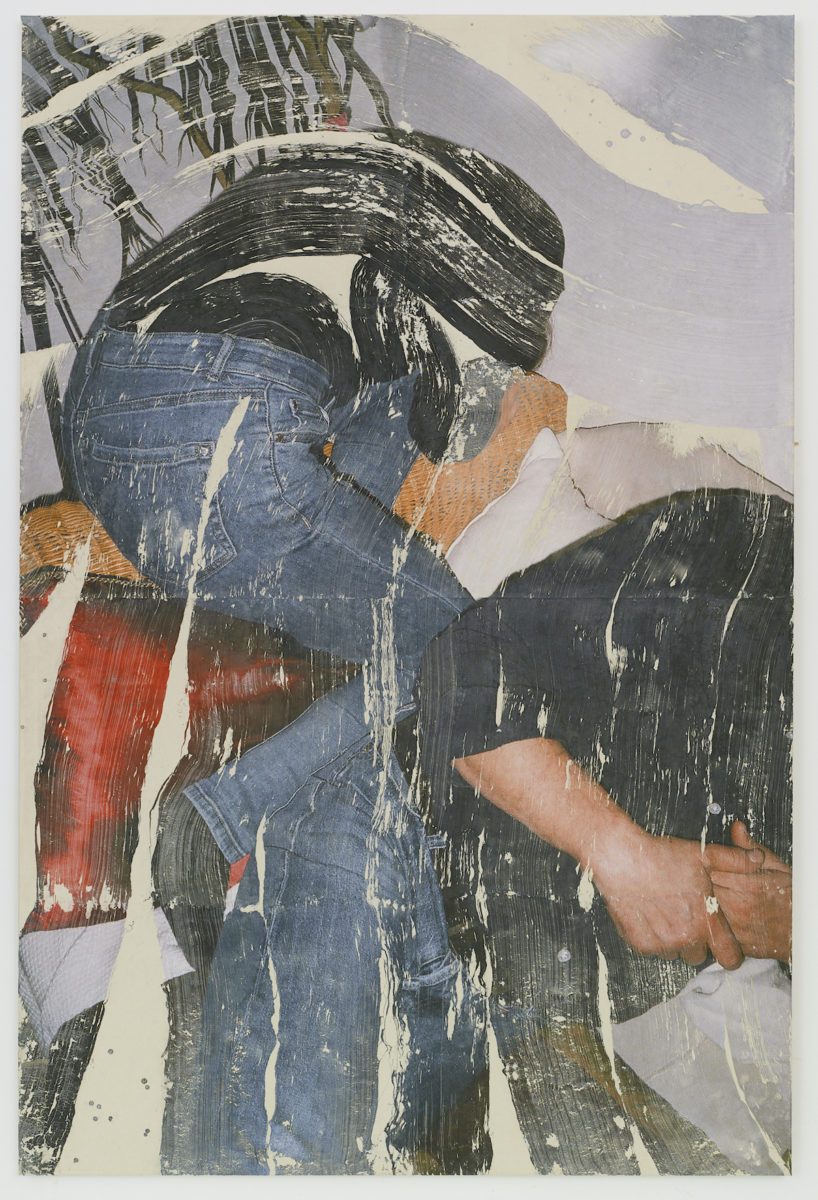 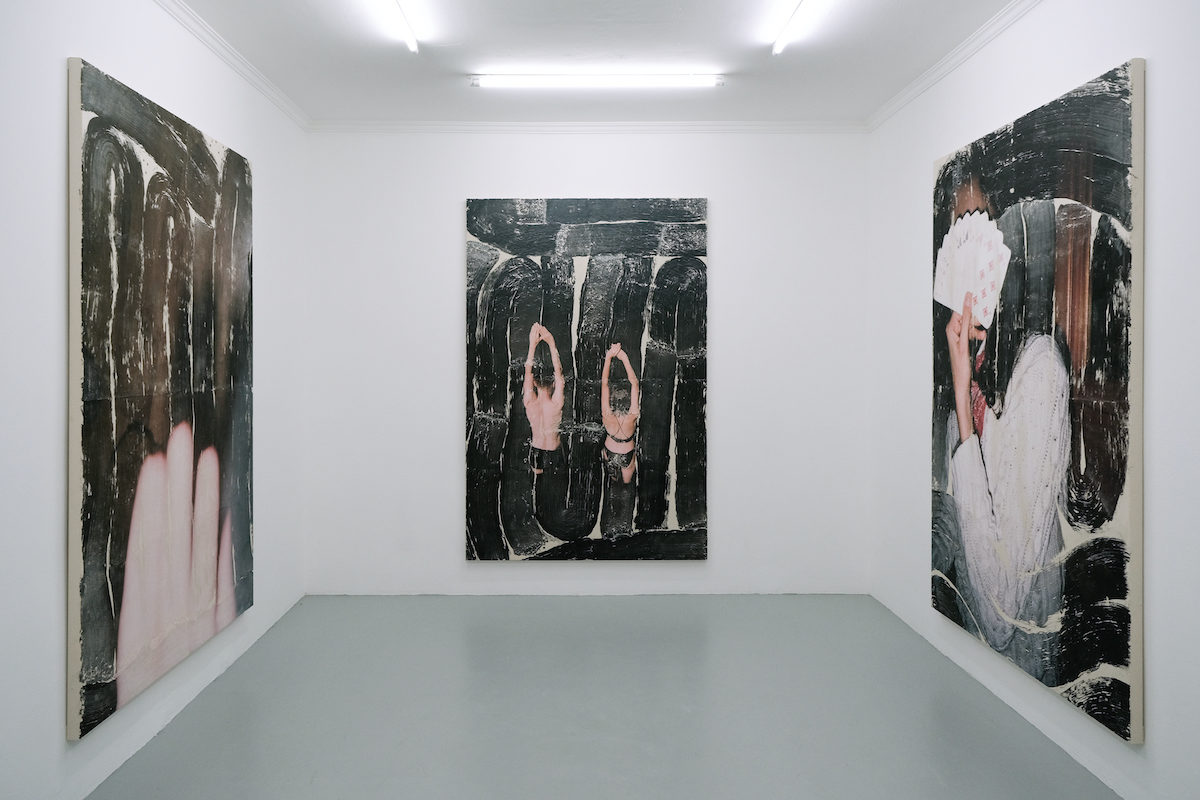 11. Tatjana Danneberg: Out of Tune

LambdaLamdaLambda, which happens to be the first contemporary art space in Kosovo, describes Tatjana Danneberg’s solo show as “a visual choreography” that synchronizes themes of time, space, and simulation through the artists multi-layered materials and techniques. The Austrian artist’s process includes “image developing, printing, transferring, and painting,” fluctuating between fast and slow phases of production. The final results are distorted through this circuit and “amplified by its different temporalities.” Danneberg has participated in a residency at the Google Cultural Institute in Paris and exhibited her first solo show with LambdaLamdaLambda in 2015. 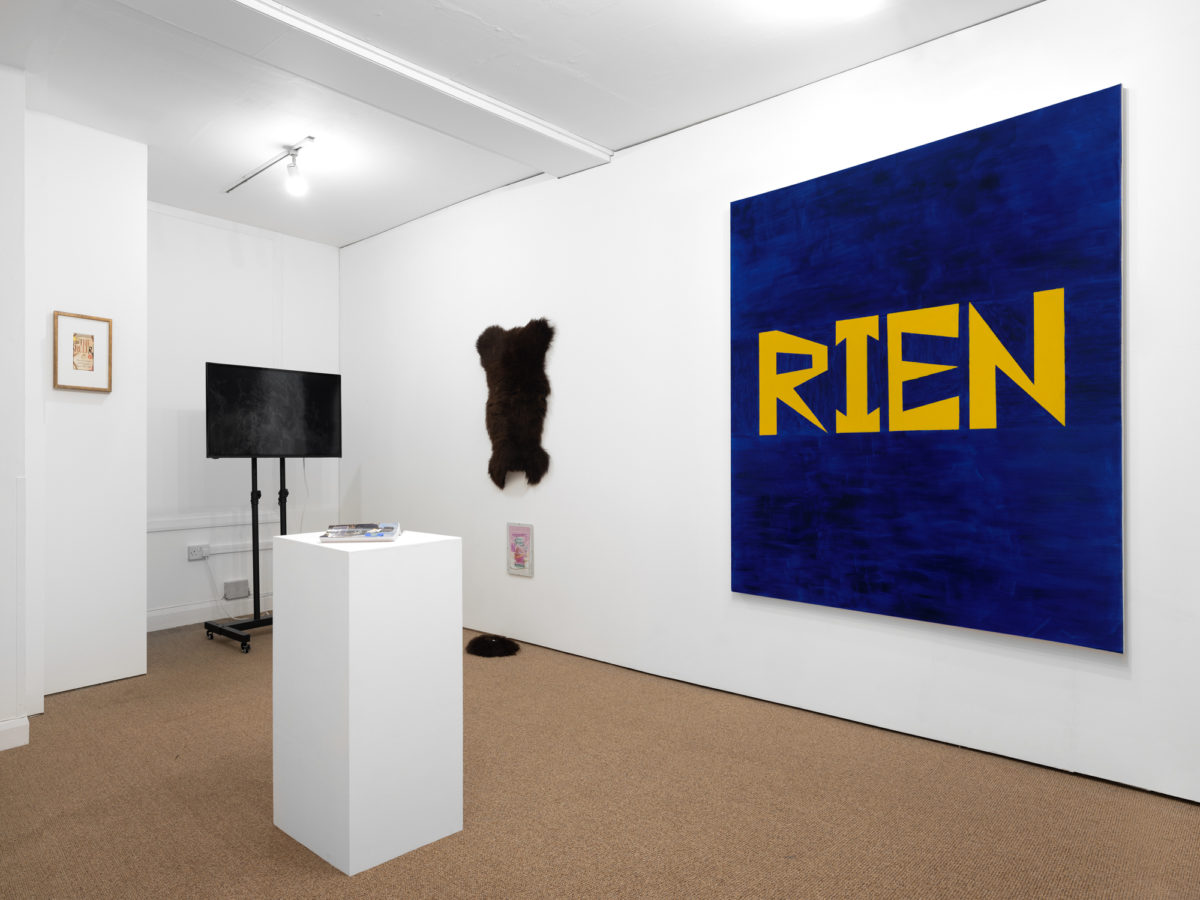 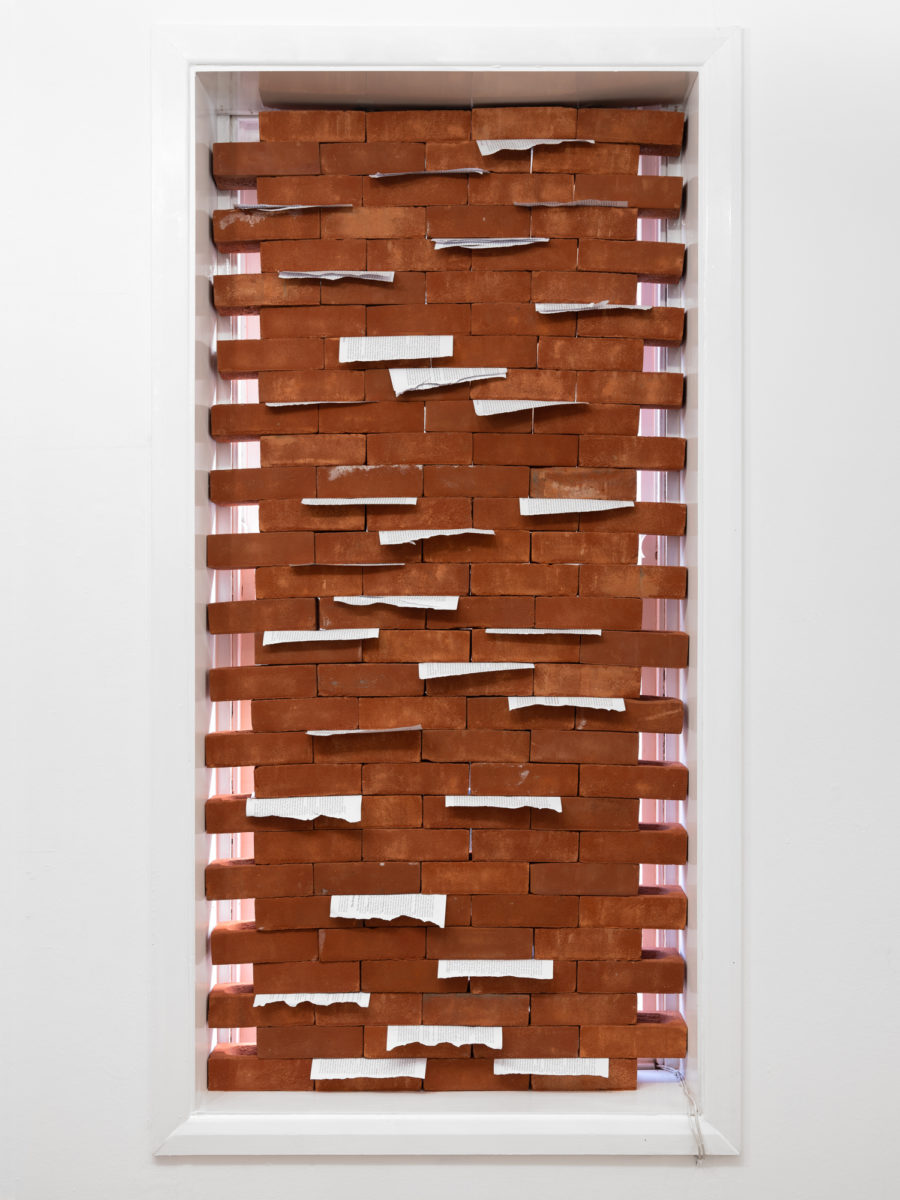 Hannah Black's Bastille playfully reconstructs the story of Marquis de Sade's hidden prison manuscript found on the day of the storming of the Bastille during the French Revolution.

Hannah Black is a visual artist and writer originally from Manchester. Her work spans video, text, and performance and draws on themes of “global capitalism, feminist theory, the body, and sociopolitical spaces of control,” according to Art in America. Black’s exhibition at Arcadia Missa explores those themes through a conversation between French Revolutionary artifact and pop art painting to confront the “financial valorization” that takes place in the art world and “echo wider social structures.”

Morphadat is an organization that creates “opportunities for artists from the Arab world through an inventive approach to funding, commissioning, collaborating, and gathering,” partnering with the KW Institute for these exciting commissions from artists Jasmina Metwaly and Yazan Khalili. Khalili’s commissioned work, Medusa, is a video installation that incorporates the artist’s long-standing digital archiving of political unrest. Metwaly’s Anbar consists of a three-channel video installation with textile components, “addressing the semantics of military uniforms in the aftermath of the 2011 Egyptian revolution.” 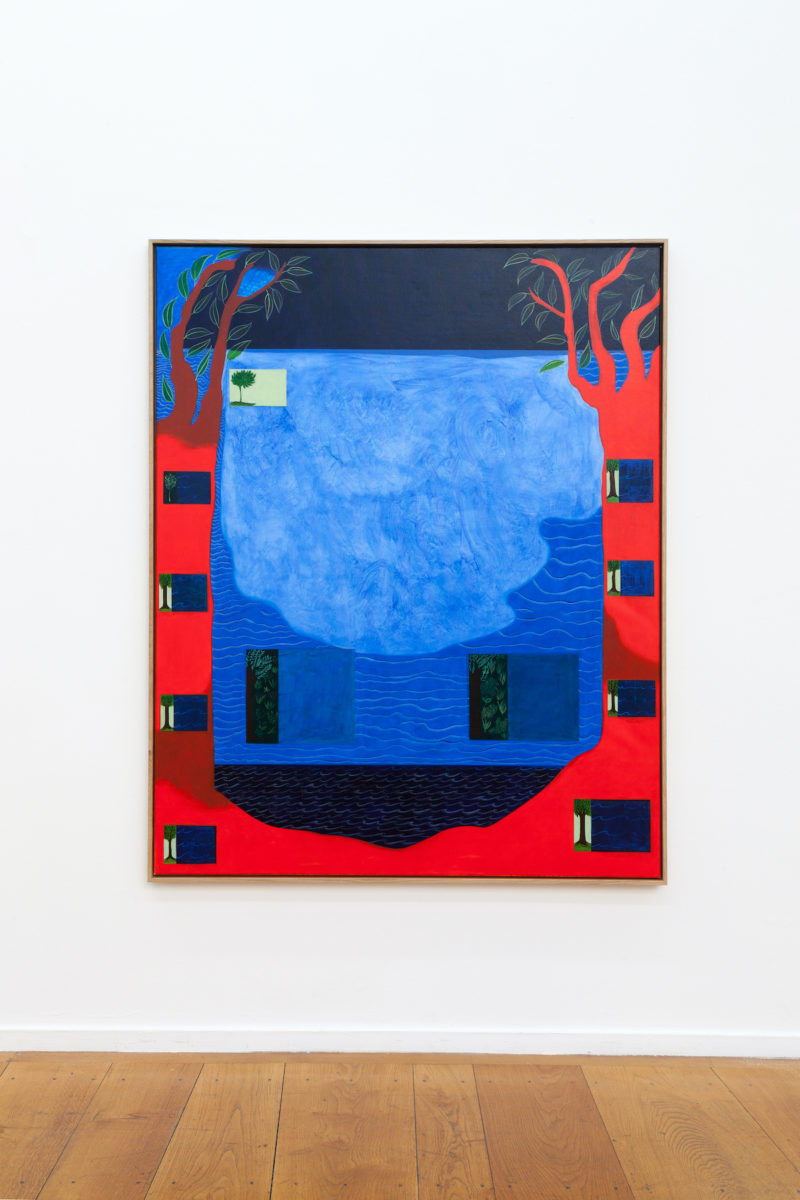 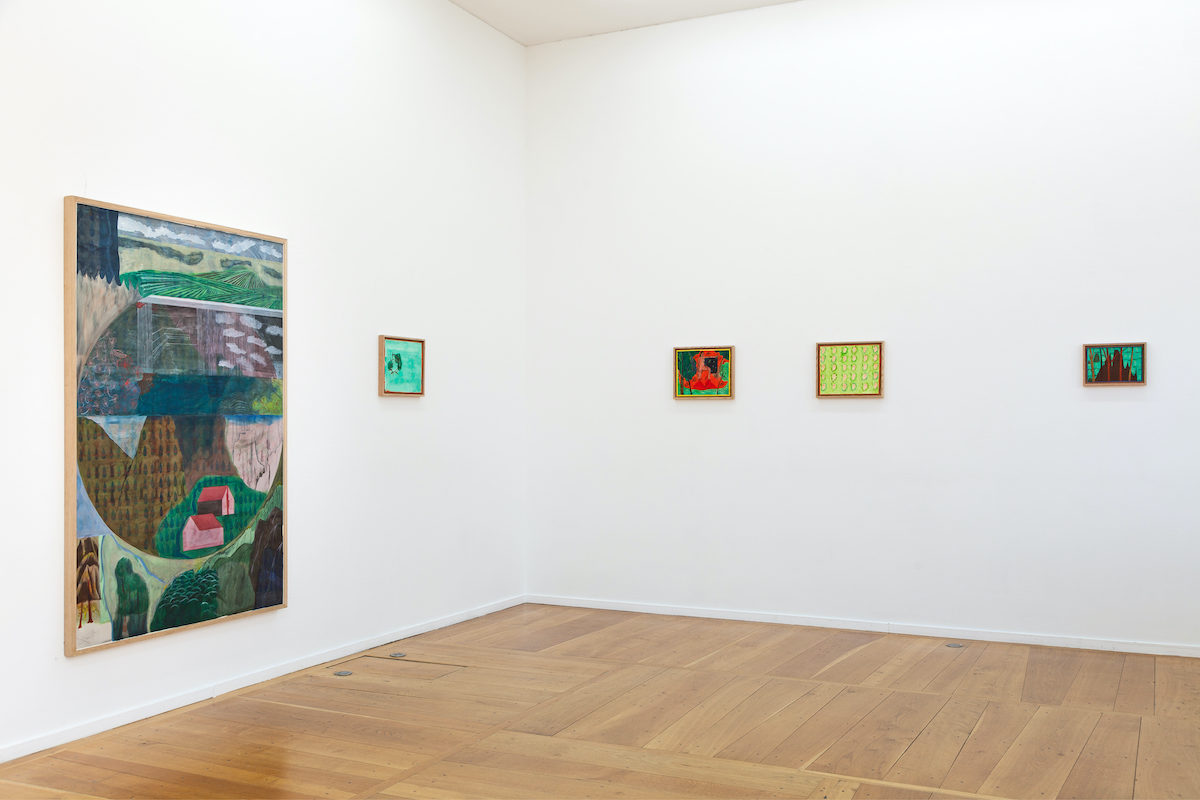 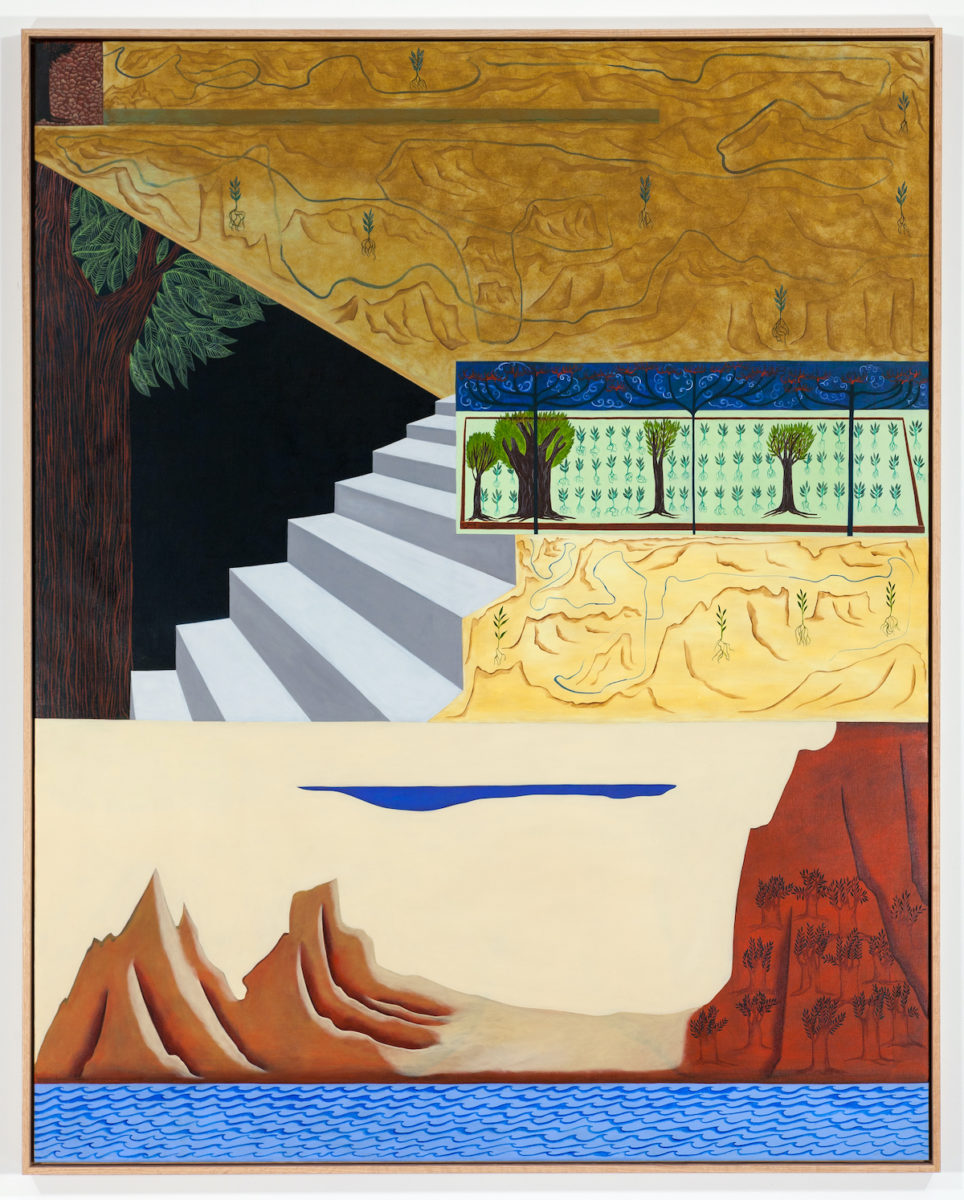 Galerie Xippas has galleries in Paris, Geneva, as well as Montevideo and Punta del Este, Uruguay. Focused on international contemporary art, Galerie Xippas is known worldwide as a platform for discovery and promotion of both young and established artists. Their Paris gallery features paintings from Mumbai-born painter Karishma D’Souza, who makes use of narrative storytelling from the artist’s personal memories as well as current political strife in India that turn “image-making into an art of remembering.” 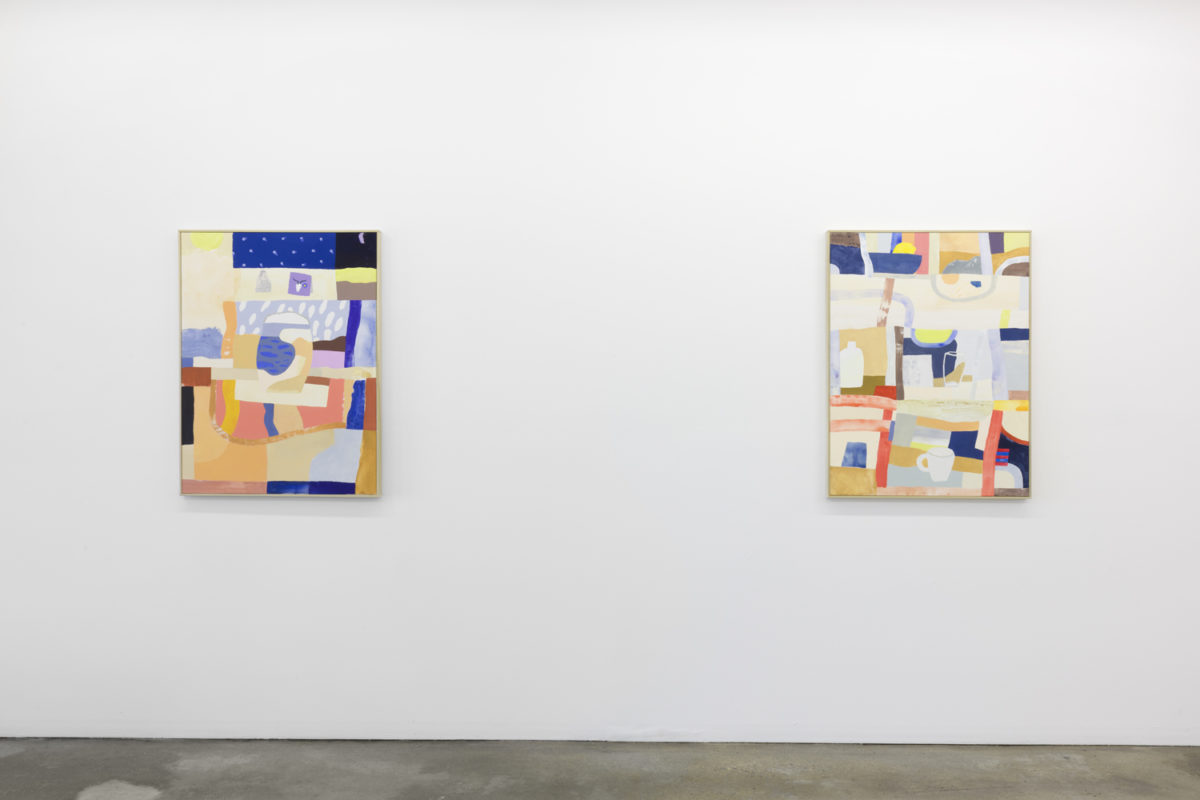 Two paintings by Bella Foster at The Pit in Los Angeles, California.

15. Bella Foster: We’ll Put on the Day and Wear it till Night Comes

The Pit’s second solo exhibition of Bella Foster’s work consists of a recent collection of the artist’s singular water-based paintings that depict figures, interiors, objects from art history, and other personal objects. In a letter to the artist, fellow Pit-represented artist Adrianne Rubenstein wrote: “Your new paintings are like sand in an hourglass, quiet and slow… I guess it’s a given that everything ages and falls apart. Things grow moss and show wear which is romantic and everything, but it’s a battle not to buckle under the weight of time. Painting is a lovely tribute. I know you approach your work tenderly and that it’s an extension of relationships that are meaningful to you. All art is really a bit of a graveyard, a scale shift. One thing holds up another.” A nice note to remember how art can function in turbulent times.