In Uzbekistan, the Last Remnants of an Ancient Civilization

The desert that surrounds Nukus, Uzbekistan, is home to a historic site dating back thousands of years.
SnapshotMeher Mirza

Just outside Nukus, Uzbekistan, a writer reconnects to her (ancient) past through the last remnants of Zoroastrian culture.

Uzbekistan’s glories are the stuff of legend. Bukhara’s old city, for instance, is the birthplace of Avicenna, the father of early modern medicine, and holds some of Central Asia’s most beguiling architecture. The capital, Tashkent, is an ode to Russian modernism, with the grand Hotel Uzbekistan and an ornate subway system stamped with Soviet and Islamic art. And the southern city of Termez overawes with its clutch of ancient Buddhist stupas.

This alone would be enough for any curious traveler. Yet despite its growing economy, Uzbekistan is still an underrated destination, even with a storied past that encompasses the Silk Road, powerful khans, and the blossoming of the Islamic Golden Age.

“I flew [to Uzbekistan] as much to discover a legendary land as to drop an anchor to my (ancient) past.”

Last year, when I traveled to Uzbekistan, I wanted to peel back the centuries even further, to the dazzle of the country’s Zoroastrian empires, which existed as early as 550 BCE. As a member of the very small, very shrinking Zoroastrian community in Mumbai, I flew there as much to discover a legendary land as to drop an anchor to my (ancient) past. Zoroastrianism is purportedly the first monotheistic religion, though it only has approximately 100,000 worshippers left worldwide. It is a religion that sees divinity reflected in the natural elements of earth, air, and water, but most of all, in fire. Most of its followers are now clustered in India and known as Parsis.

Three powerful Zoroastrian empires once ruled over Uzbekistan: the Parthian, Sassanian, and Achaemenian. The last of these was perhaps the world’s first liberal, pluralistic society, and its first superpower—the Achaemenian demesne was at one time the largest the ancient world had ever seen, larger than the European Union is today. 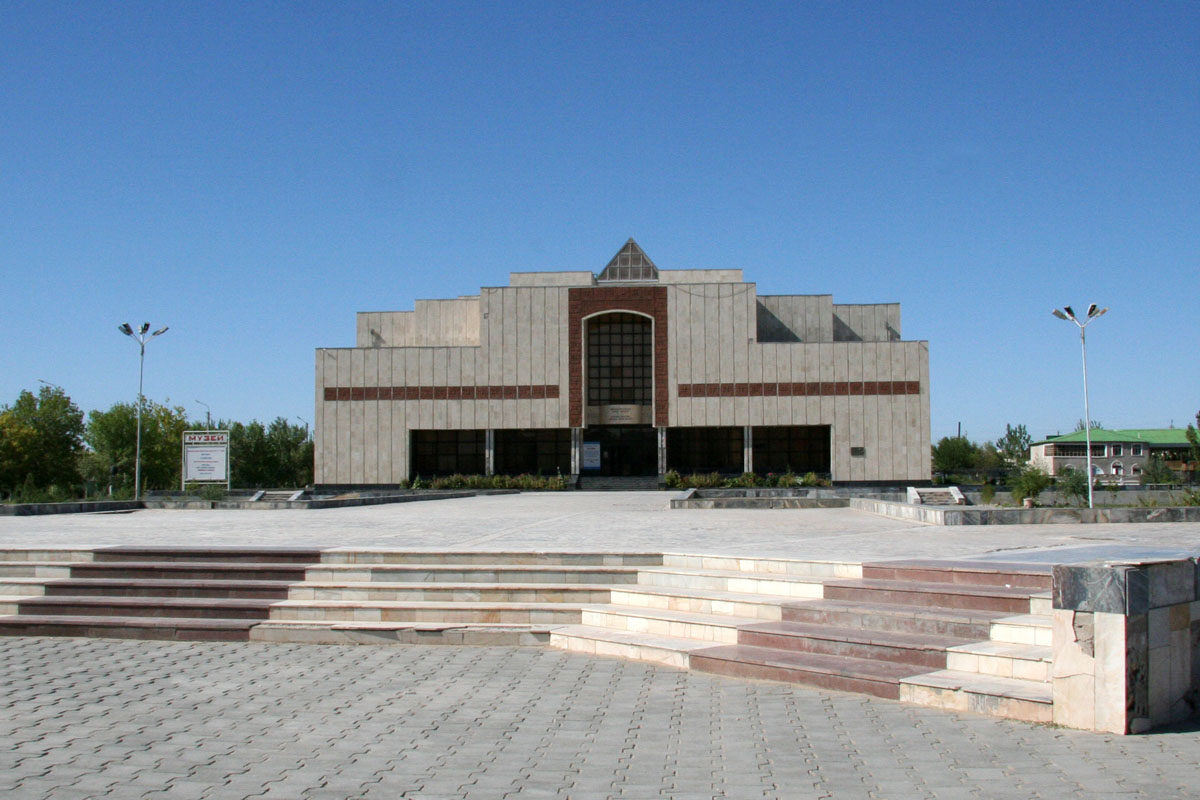 The Savitsky Museum in Nukus. Photo by ChanOJ.

It’s no surprise that Zoroastrianism underlies so much here. Its spirit lives on all over Uzbekistan: in ancient symbols etched onto the pillars of Khiva, a northwestern city of 90,000 people; in the rubble of the old city of Afrasiyab, an ancient citadel in majestic Samarkand, one of Central Asia’s oldest continuously inhabited cities; in Ming Urik, a sandy relic of a fortress, hidden down a quiet side street in Tashkent.

But to me, the most intriguing of all these sites is Chilpik, shielded from easy view by its distance from the thriving tourist centers of Samarkand, Khiva, and Bukhara. It is most easily accessed from the city of Nukus, the capital of Karakalpakstan, a northern, semiautonomous republic within Uzbekistan. Nukus, perhaps best known for being the doorway to the Aral Sea, is also home to the astonishing Savitsky Museum and its remarkable Soviet avant-garde art. The centrally located Tashkent Hotel offers a very comfortable stay—enormous rooms (many with balconies skirting them), a decent buffet breakfast, and 24-hour WiFi. It is from here that we began our fifty-minute drive on a smooth, sun-bleached road, until we reached Chilpik.

“It’s no surprise that Zoroastrianism underlies so much here. Its spirit lives on all over Uzbekistan.”

Chilpik is a 2,200-year-old hollow tower that sits atop a vast, arid land. It once lay next to the Amu Darya river that fed the mighty Aral Sea (the river has since moved away). It was a dakhmo, a Zoroastrian funerary tower, mirroring the dakhmo in Mumbai. It was likely closed off for the exclusive use of the nobility. From around the second century or so—the structures are so ancient and under-studied that it’s difficult to pinpoint exactly when—elaborately costumed barges snaking down the river brought the dead here, where the bodies were then laid prone to the elements. The remains would then be enshrined in the tomb-like ossuaries.

It’s hard to imagine what it was once like here. From the 1960s onward, Russian colonizers urged cotton farming, and the two bountiful rivers of the region, Amu Darya and Syr Darya, were contoured into canals to irrigate the surrounding area, an act of hubris that led to the exponential shrinking of the Aral Sea. (As autumn rolls by every year, the government authorities compel residents to harvest the cotton crop to this day.)

Check out our ultimate guide to road trips → 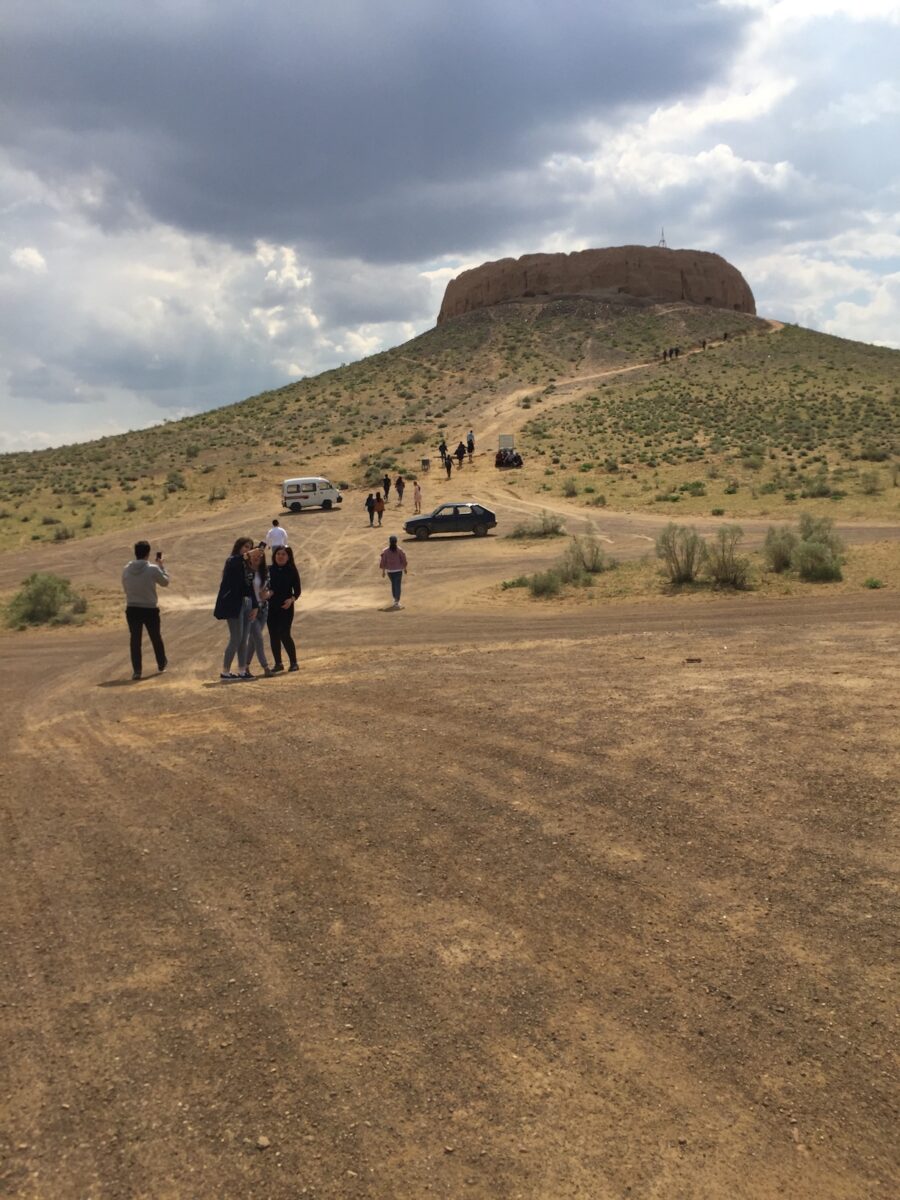 From the outside, there isn’t much to Chilpik. Steps reach up a sandy outcrop until suddenly, at the very last, they smooth into a scarp. Climbing it hand and foot (for a clumsy city-slicker like me) is the only way to enter the vast empty space at its pinnacle. Nothing remains within at all, having possibly been plundered long ago. Still, when I visited, it held a gentle majesty—a ghostly guardian watching over a deserted land.

Standing atop Chilpik, I feel the thread of Zoroastrian history forever twined to my heart. But there’s something about making pilgrimages to ancient, mysterious structures like this one, no matter your personal connection, that inspires a sense of wonder at both what our ancestors were capable of, and, for better or worse, how far along we’ve come. As the world continues to modernize and erode evidence of bygone cultures, Chilpik feels like the shard of a shattered civilization coming to life, inviting the lure of a lost world.