Quaid Heneke chose the name Queezy in part because of the way strangers used to stare at them when they were a kid—with a nauseated look. “I’ll be the most nauseating thing ever," says the gender-bending performer. "It’s so fab it’s nauseating."
IndexEmma Glassman-HughesJustin Keene

Cape Town, South Africa, is erupting with new talent—particularly from its most marginalized artists. “The queer, black, and coloured kids are doing things,” says Catherine Saint Jude Pretorius, the Cape Town–born, London-based musician and rapper who performs as Dope Saint Jude. “We are the ‘Born Free’ generation; the kids who were born outside of [apartheid]. A lot of us have been afforded a good education, and we are more inclined to try to disrupt those spaces or at least create alternative spaces for ourselves.”

But where there is a wealth of ingenuity, there lacks the infrastructure to support it—forcing many artists, like Dope Saint Jude and her friend K-$, a DJ now based out of Johannesburg, to leave the city entirely. For Here Magazine‘s 11th issue, we spoke with four of Cape Town’s most promising young creators—some who’ve moved away and some who’ve stayed—about the challenges and rewards of making music in their home city.

4 Capetonian Artists You Need to Know 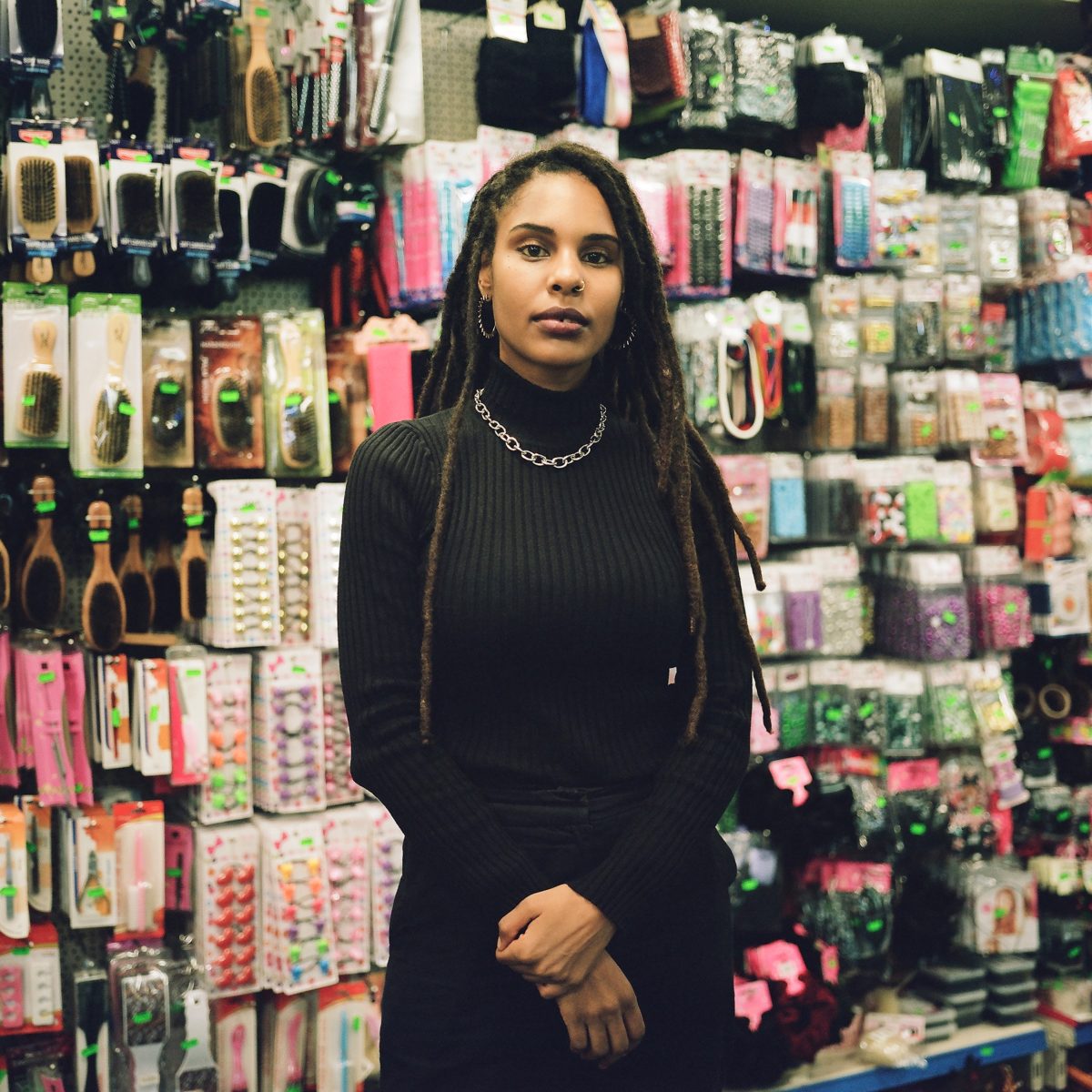 “I always knew that I had a passion for performance, but I didn’t take it seriously until I became a drag king,” says rapper/musician Dope Saint Jude. “I realized that this is a thing that brings me the most joy, performing and writing my own stuff.”

It was a first brush with Cape Town’s drag scene that led musician Dope Saint Jude to the stage. “I always knew that I had a passion for performance, but I didn’t take it seriously until I became a drag king,” she says. “I realized that this is a thing that brings me the most joy, performing and writing my own stuff.”

And as her love for music grew, so did her ambition. In 2019, she moved to London, having recognized the near-impossible task of single-handedly bridging the very nuanced social and cultural divides of Cape Town. “There are so many different communities that are fragmented by race. It’s definitely a legacy of apartheid,” she says. “It’s a lot of politics to navigate as a young artist just trying to make a living.”

“I always knew that I had a passion for performance, but I didn’t take it seriously until I became a drag king.”

The controversy over South African land ownership is a theme in some of Saint Jude’s work. She even opens her 2018 EP, Resilient, with a dreamy, self-empowering anthem titled “Who I Am,” and sings “they claim my land / South African / so I say to the world / gonna know who I am” at every chorus. Resilient is an upbeat project full of clever raps that address everything from the intersections of blackness and queerness to the peculiarities of navigating a world full of “woke” youth on Twitter. The second track on the EP, “Grrrl Like,” is featured in the trailer for the Apple TV series “Dickinson” about the queer 19th-century icon and poet.

And despite its current limitations, she still plans to return to her beloved Cape Town someday. In “Who I Am,” over melodic acoustic riffs of almost-Spanish guitar, you hear Saint Jude laughing and saying, “I’ll get myself a mansion on Camps Bay Beach,” which is some of Cape Town’s most coveted real estate. “I think it’s important that I own land at some point and I’d like to own that land in Cape Town,” she says to me. “I’ll come back after I make money in Europe by having fun—so in a way, it’s kind of reparations.” She lets out another laugh, but I know she’s serious. 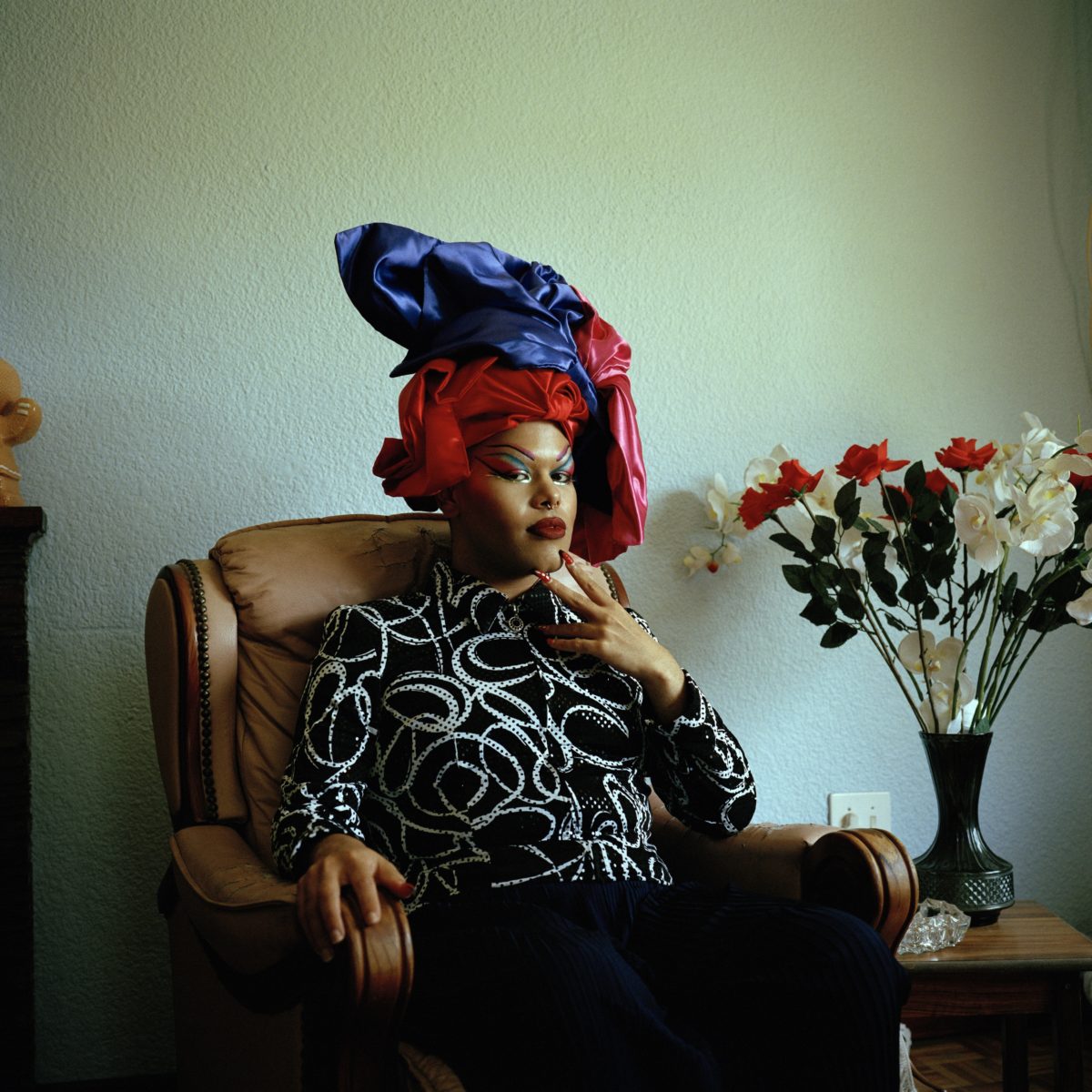 Like many things in Cape Town, the queer scene is fragmented and sometimes difficult to navigate. But that doesn’t stop Angel-Ho from enjoying it. “I love going to the gay clubs all the time,” they say. “I’m a mess, I have so much fun.”

In 2015, multidisciplinary artist, performer, vocalist, and DJ Angel-Ho collaborated with Dope Saint Jude on the recording and music video for “Keep in Touch,” one of Dope Saint Jude’s earliest tunes. “[When we made “Keep in Touch”], everybody loved my verse because it was very political; I was dazed and confused by colonialism.”

In the music video, between cuts of them voguing and serving looks, Angel-Ho—outfitted with dark lipstick and a gorgeous beard with neon-green strands braided in—comes in hot with their staccato introduction, rapping “Angel-Ho, here I come / a coloured girl from Kensington / best believe I stack a ton / of bitches.”

“I was dazed and confused by colonialism.”

Their poise is striking, but Angel-Ho’s journey to radical self-acceptance was of course not always easy—especially trying to make music in Cape Town. “I’m the weird girl who makes weird music,” they say. “I did a show in Cape Town coming off a tour in Europe and eight people came. Sometimes I feel like people don’t give a fuck about me in South Africa because I’m not being trendy.”

But that hasn’t stopped the self-taught musician from creating—and even when Cape Town proves to be a stifling environment for a growing artist, Angel-Ho says that the greatest reward of living there is the talent that they’ve gotten to collaborate with, including Dope Saint Jude before she moved to London.

“She was really good at producing and she was very supportive of my music career,” Angel-Ho says. They also founded and ran Non, a collective of musicians from the African diaspora around the world, for three years before moving on to other goals and projects, such as an upcoming album (expect something vocally driven and “not serious” in 2020; also, “there’s a lot about sex”) and a potential move to Europe, where they feel people are “open to new things more easily.” 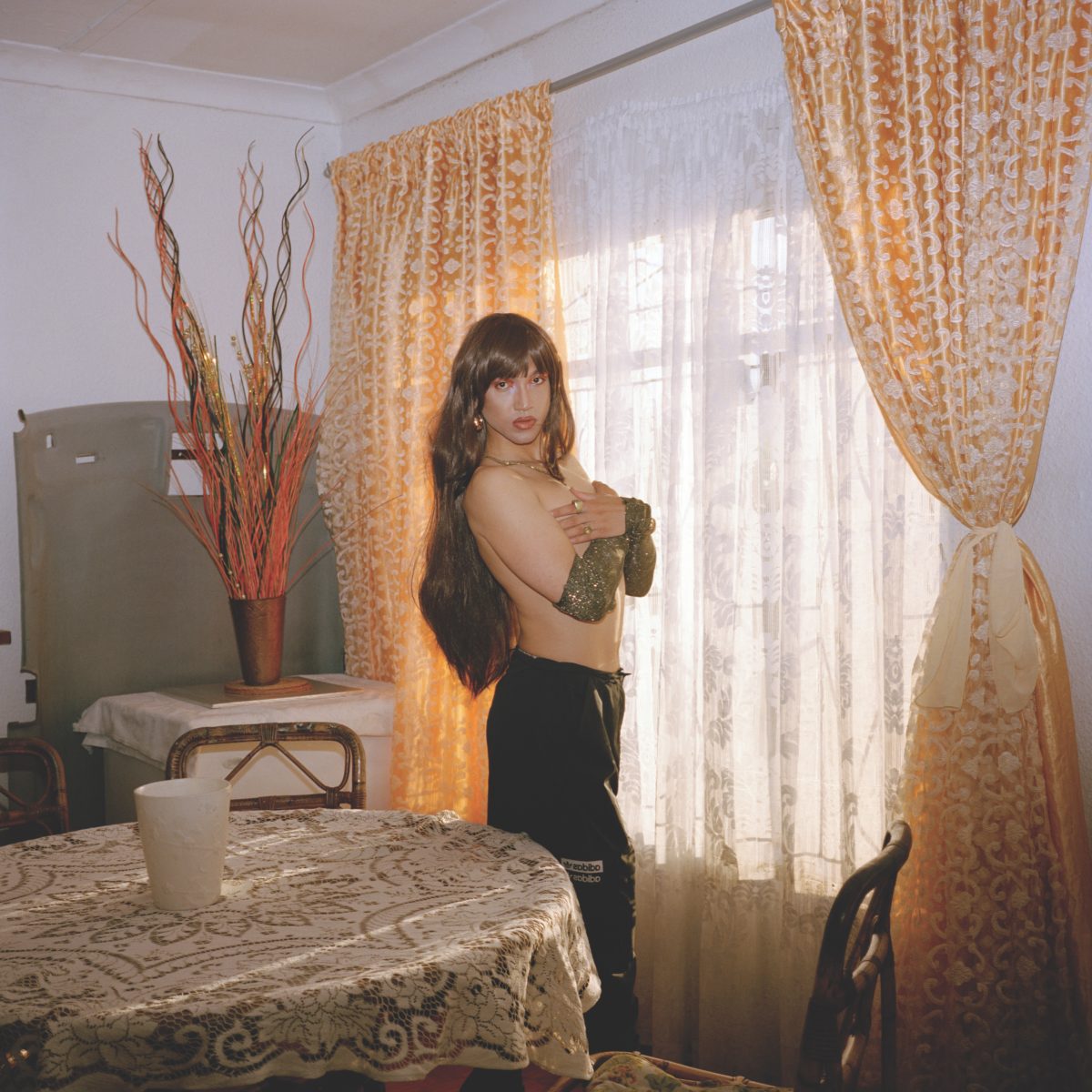 Queezy moved to Johannesburg during a period of difficult transitions, but soon moved home to Cape Town. “When I got to Joburg it was hectic,” they say. “In a way it was kind of like my chrysalis. I took for granted what I had here in Cape Town in terms of friends, family, and connections.”

When Queezy was younger, they were often stared at in public—strangers would give them what Queezy describes as “this nauseous look.” But what was arguably traumatizing as a child proved to be the fuel for their future career as a gender-bending DJ. “I couldn’t understand why people looked at me like that, so I thought, I’m gonna call myself ‘Queezy,’” they say. “I’ll be the most nauseating thing ever. It’s so fab it’s nauseating. But, like, in a chic way. ”

Queezy studied fashion at university before turning to music. Instead of showing their clothes on a runway, Queezy decided to just perform in them. “It’s about looking at gender norms and deconstructing the idea of what a garment should be,” they say. The response was overwhelmingly positive, but Queezy noticed that they were performing for a disproportionately wealthy audience.

“I’ll be the most nauseating thing ever. It’s so fab it’s nauseating.”

“If I’m gonna do this, I don’t only want to do it in Cape Town[’s city center], I want to do it everywhere. So I started going everywhere, like in the hood, in town, in scary places,” they say. “I thought, How do I perform queer visibility and share it in a way that is nonviolent? In a way that people can understand, and they can connect with? I had to just insert myself into a space, and the best way to do that is through music.”

Over the last two-and-a-half years, Queezy has performed at major Capetonian venues, including the Boiler Room and Zeitz Museum of Contemporary Art Africa (MOCAA), in an area and a space that might not have been safe for people of color even just a decade ago. Queezy’s Zeitz performance was nothing short of iconic: In a dress made with 72 flags from countries where queerness is criminalized, they lip-synced to “typical Cape Coloured Christmas songs,” like Mariah Carey’s “All I Want for Christmas Is You” and “lots of Whitney Houston”—all from eight meters high in the air on a scissor rig. “I wore a cheeky hat,” they say. “It was super fun.” 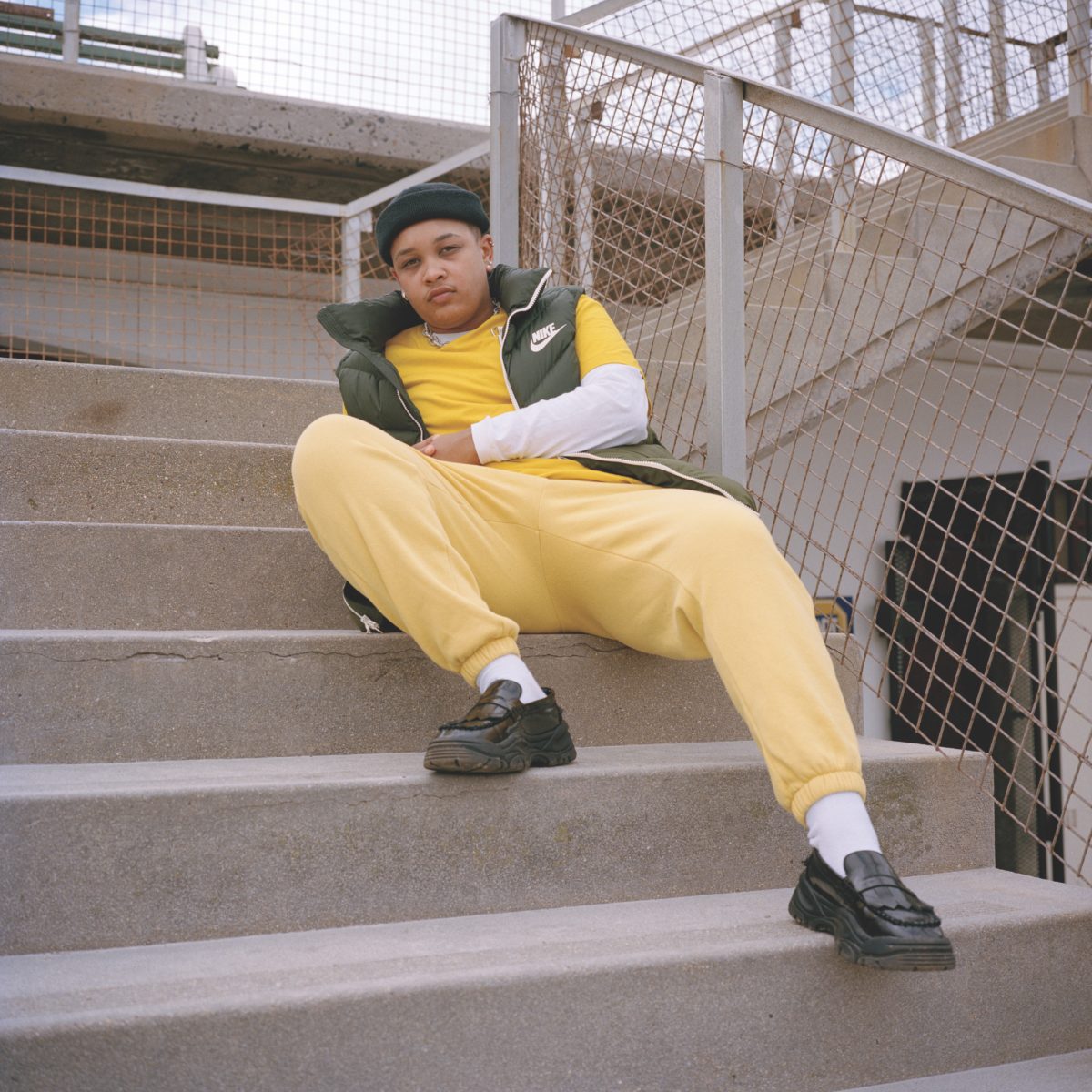 DJ and musician K-$ knows that Cape Town needs to do better by its marginalized artists. "In this day and age it’s time to give people their coins,” he says.

K-$ loves to groove. When it comes time to perform—whether in Cape Town, Swaziland, Austria, or Johannesburg—he can hardly stand still. “I’m not a static DJ,” says the performer, whose real name is Kalo Canterbury. “I try to give people that incredible feeling of oh my god, what is this song? I fucking love this DJ. I’m just trying to hold space up there, like, yo, I’m having fun regardless of what’s going on in my life. Just escape with me for an hour.”

House music has skyrocketed in popularity across South Africa, but K-$’s sound is mostly hip hop, R&B, and old soul from the ’40s and ’50s—what he affectionately refers to as “the golden oldies.” The eclectic mix reflects a day in the life of young Canterbury, who used to be dropped off at school in Rondebosch by his dad to the tune of classic rock and ’80s club music, and later picked up by his grandmother, who played Motown classics as she transported him across the highway to her Cape Flats home in Athlone.

“I’m having fun regardless of what’s going on in my life. Just escape with me for an hour.”

The sheer geography of his childhood had a massive impact on his understanding of self: During apartheid just one generation earlier, Rondebosch was designated whites-only, and, due to forced removals from within the city, the sprawling Cape Flats became home to the largest population of coloured people in greater Cape Town.

He’ll always have a soft spot for his hometown, which raised him and saw him through the beginnings of his DJ career and his gender transition; but since moving to Johannesburg with his girlfriend, he’s spread his wings even more.

“I’m enjoying exploring South Africa through a different lens, because Joburg is, like, quintessential urban Africa. There’s more resources here; it’s a much bigger city and there’s more opportunity.” And in his mind, it’s time for Cape Town to get on the same page. “We don’t do things for free or for exposure anymore, because how are we going to eat and continue to create if we’re starving? In this day and age it’s time to give people their coins.”

A version of this story appeared in Here Magazine issue 11. Read the full story here.