For me, the image of Los Angeles first came into focus with Bret Easton Ellis’s novels, the first glimpse I had of daily life in L.A., (at least for a certain kind of person). Errands, hangovers, spats with obnoxious friends. Street names, restaurants, and clothing labels are sprinkled on every page like breadcrumbs over a map of the city. When I first moved here, I already knew I wanted to follow an itinerary focused on Ellis’ glittering literary landmarks—so imagine my surprise when, not long after arriving in California, I came across Ellis himself.

Through a bizarre series of events, we end up at dinner together, and I learned what countless restaurant companions knew before me: Ellis is a freaking delight to dine with. We’d met only once at a party, but he makes a beeline for me through the crowd and we crash into a sort of half bear hug. “Do you care where we sit? They’ll seat us right now if we sit outside, but if we sit inside there’s a wait,” he greets me, rapidfire, as if we’ve known each other for years. “My only requirement for restaurants these days is that I can hear you talk.”

Some of Ellis's most famous novels are set in LA.

Hippo in Highland Park, however, transcends this criteria when he declares it “a nightmare of deliciousness.” Ellis loves food, and anyone who’s read him knows that his characters really only care about where to go, who to go with, and what to order. Ellis himself drinks gin on the rocks and uses his fingers a lot because he likes to feel what he’s eating. We’re so stuffed, so full of Bufala mozzarella and house made ravioli and sea scallops that I’m dizzy, but he lets me choose dessert anyway, something seasonal with caramel and pumpkin.

There are so many things about which we agree, about music and television and culture, that it makes sense to me why the references in his novels have always felt real. I need someone to tell me what’s right, and I need someone to tell me what’s wrong, says one of his less reprehensible characters. Until I get my bearings in this town, I’m happy to let that person be Ellis—at least when it comes to legendary restaurants that are so steeped in lore I never would have assumed natives unironically go there, but they are very real epitomes of past and present California culture. 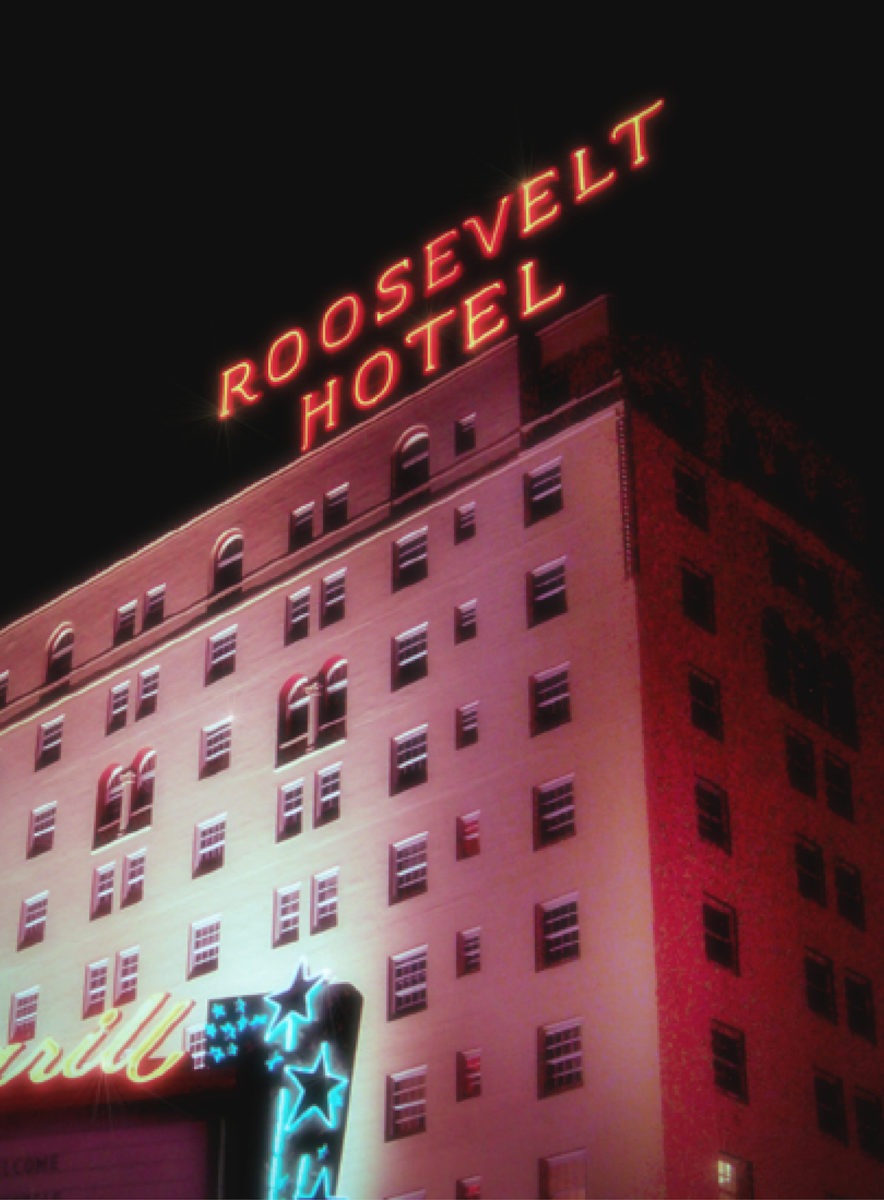 At The Hollywood Roosevelt, you've got options. Photo via Ken Lund.

Hiding in plain sight on an overwhelming, cheese-infested tourist stretch of the Boulevard, Ellis brings the Roosevelt to life in Imperial Bedrooms as his recurring anti-hero, Clay, drifts into the bar after a film screening at the Chinese Theatre. The Spanish Colonial Revival is classic Hollywood, a Historic-Cultural Monument, and still holds up. The Tropicana on weekends is more day-club than sleepy sunbathing, but you can still ogle the David Hockney mural on the pool floor or cozy around the fire pit in the evening chill. Word to the wise: They will pre-authorize your card for that $400 bottle of Casamigos, so be sure you can swing it before ordering for your new pool friends.

Inside, you never know who’s hiding in the dark cave of Teddy’s Bar under the Moorish arches, filling up on cheese plates, Pinot and Negronis, but they’re probably avoiding whoever’s hiding upstairs in The Spare Room. Even without the Prohibition-era bowling alley, even if the DJ didn’t play obscure 80’s synth-pop, I’d still go for random cocktails like It’s Complicated Being A Wizard, (tequila, smoked juniper, disco salt, aka a flashing rave bead in the ice.) You can always hit up Hotels Tonight to bring the party upstairs to the Marilyn Monroe Suite. 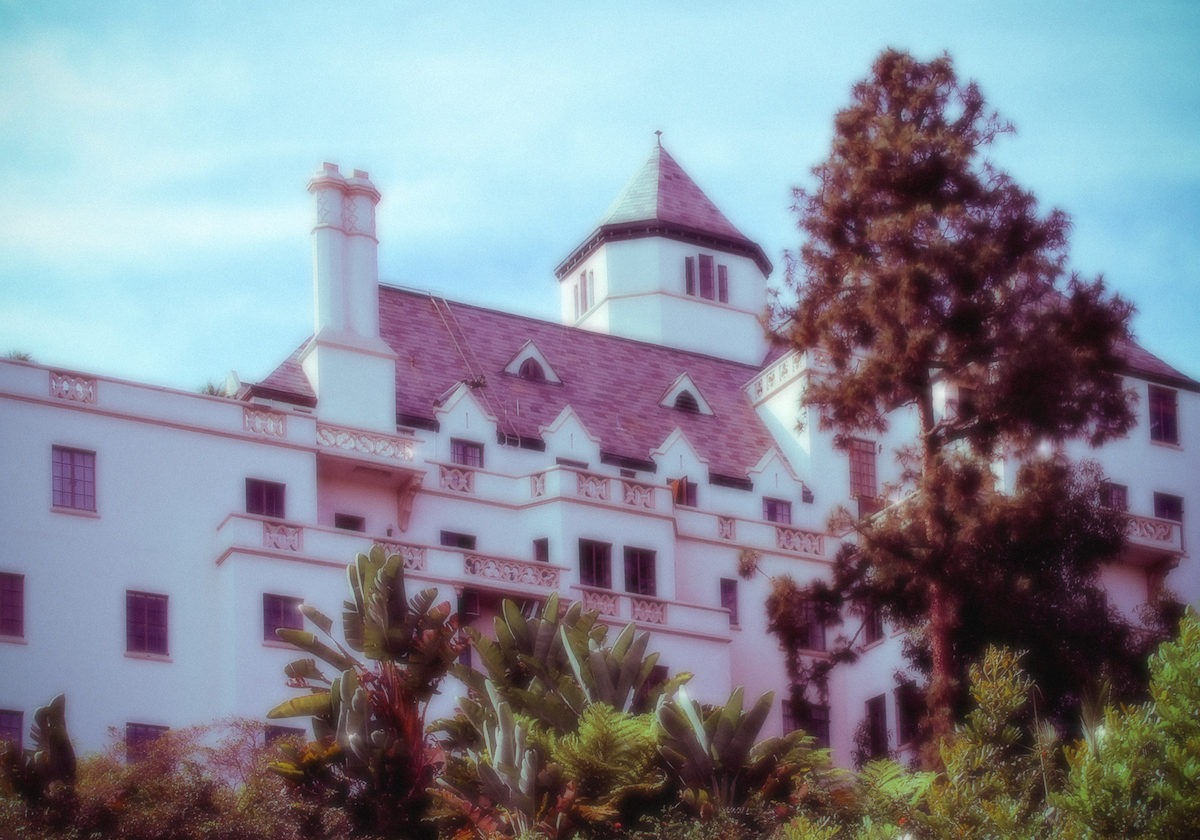 Chateau is cozy. Chateau is welcoming. This surprised me, given every movie I’ve ever seen, and the stories I’d been told about the glory days with Lindsay Lohan’s raucous crew, which roared all the way through the notoriously fraught shooting of The Canyons, Ellis’s 2013 film of a dystopian L.A starring Lilo. An actress-slash-former-hostess friend of mine swears there is no secret door-rejection policy, that dinner reservations actually book up that quickly. Go in the afternoon, have a cup of tea by the record player in the lounge or lunch in the garden, (which is rightfully a point of pride, maintained with constant vigilance and much switching out of gorgeous plants), and establish a perch on a tufted sofa for the evening. After all, you probably didn’t come for the simple menu of steaks, chops, and poached shrimp, no matter how well prepared. 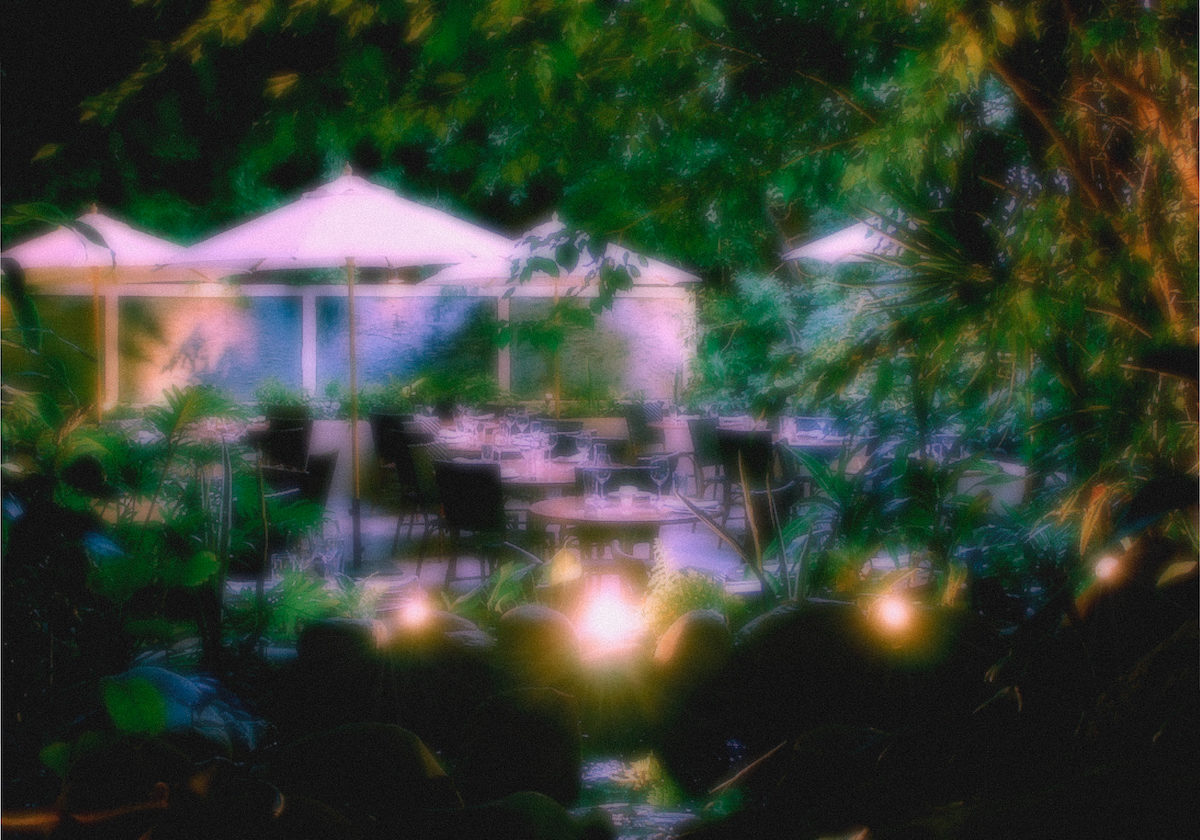 Michael's has been family owned since 1979 and is as good as ever. Photo courtesy of Michael's.

“Why couldn’t I meet you at the restaurant?” The main character of Ellis’ last novel asks after being scorned from lunch at Michael’s. “Because I don’t really want to be seen with you,” his tormentor replies. And be seen here, you will. A true understanding of tradition hit me when I walked in. It is still very much the place where agents take clients for meetings, where contracts get reviewed surreptitiously over lunch, where big Hollywood business happens under our very noses. Maybe it’s the space, a port-holed, Modernist design that feels like a ship at sea, or the mixed-bag crowd, from the college kid in cutoffs eating at the bar who has surely been coming since birth, to the white-haired couple whose $450,000 Lamborghini is outside. Maybe it’s the Michelin-recognized food, absolutely fresh down to the lemon squeeze—there is nothing sloppy here. 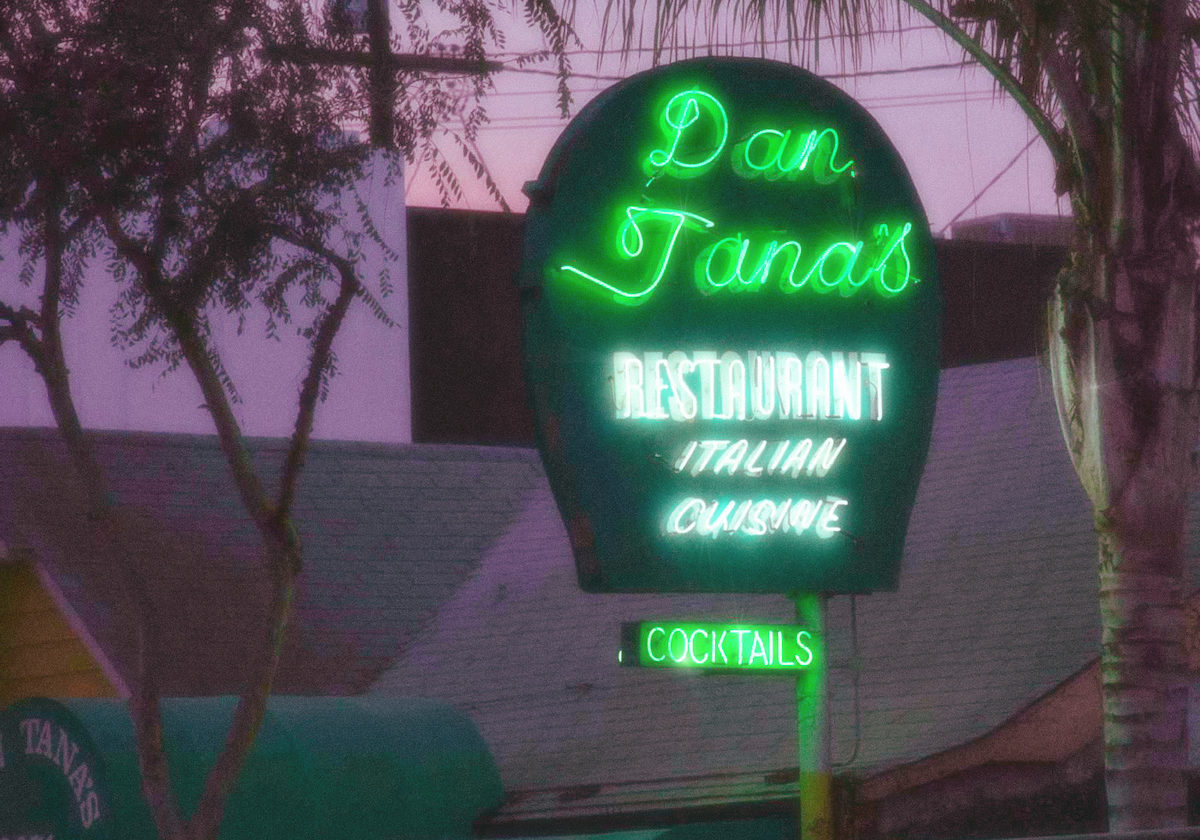 This is the kind of old school joint that accidentally turns into your best night ever, and the real Ellis has always spent as much time here as his characters, which is to say, a lot. Career bartenders and waiters speaking in Transatlantic accents or a Bronx drawl, Johnny Depp sprawled out in a booth, people waiting three-deep for their martinis and Amstel Light, half of old Hollywood waiting for their Veal Milanese. Everyone here is having fun, even the cranky gangsters at the door getting rejected for a table. (Make. A. Reservation.) Nostalgia goes a long way in this town, and in much the way PJ Clarke’s in New York will always be cool (fight me), no local will look askance if you ask them to happy hour at DT’s. 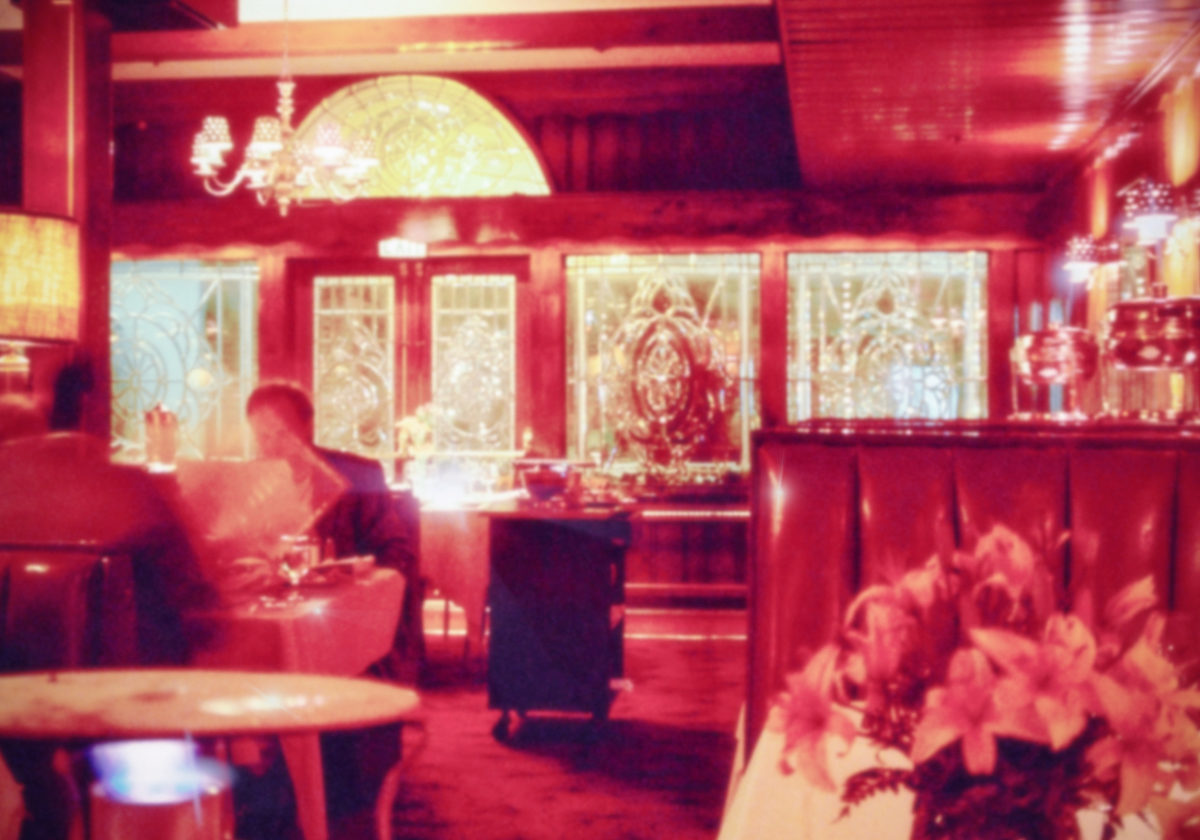 Inside the former Chasen's, a star-studded hotspot then and now—but for wildly different reasons. Photo via Alan Light.

In a particularly disorienting Ellis moment, once again Imperial Bedrooms’ Clay is wandering the aisles for a case of champagne when he realizes it’s the former site of the restaurant where he spent childhood Christmas Eves in Less Than Zero. Chasen’s closed in 1995 after 61 years of addicting movie stars to its famous chili (including Elizabeth Taylor), but many of the original booths, and chili, remain. There’s a charm to it that Instagram-cool modernity lacks, and despite the my-grandparents-would-love-this vibe, locals are wildly enthusiastic when I suggest lunch. The above average hot/cold bar spans tradition, (beef bourguignon, turkey gravy) and new-agey salads. Market-wise, there’s perfect unicorn cakes from the pastry section, twelve different varieties of bone broth, or local spirits, all of which is why BF is everyone’s favorite gourmet market.