When you think of Jewish-style delis, you're probably thinking of towering hot pastrami sandwiches and freshly baked bagels. These delicatessens deliver on the classics and so much more. Photo courtesy of Carnegie Deli.
IndexBrittany Natale

When you think of New York City cuisine, you’re probably imagining pastrami on rye (followed closely by dollar-a-slice pizza and bodega bacon egg and cheese). At one point, there were more than 1,500 Jewish delis located throughout the city churning out these sandwiches. These establishments provided New Yorkers a quick bite to eat and were also spaces for surrounding Jewish communities to congregate. Today, only a fraction of Jewish delis remain, but their cultural impact is still a huge part of the city’s history.

Ask a New Yorker what their recommendation for a Jewish deli is and they’ll probably say Katz’s. This NYC institution, famously immortalized in When Harry Met Sally, is the go-to place for hand-carved corned beef, thick-cut fries, and pastrami by the pound. Long lines often trickle down the block during warm-weather weekends, but it’s well worth the wait. 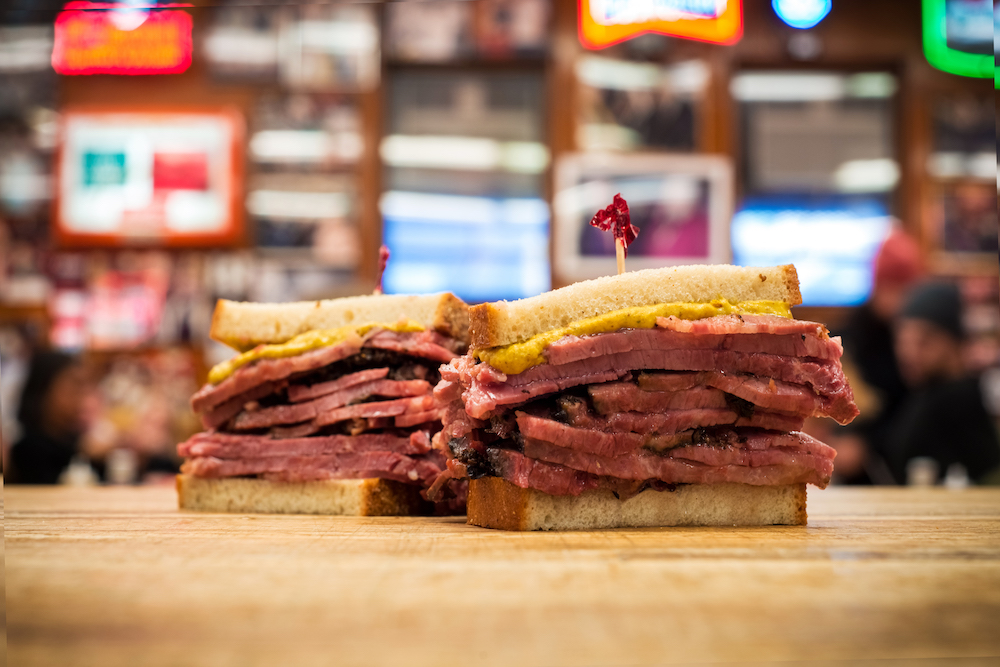 The most popular menu item, an icon synonymous with Katz's, is the thick-cut pastrami sandwich. If it's your first time at a Jewish-style deli, this is a must. Photo courtesy of Katz's Deli. 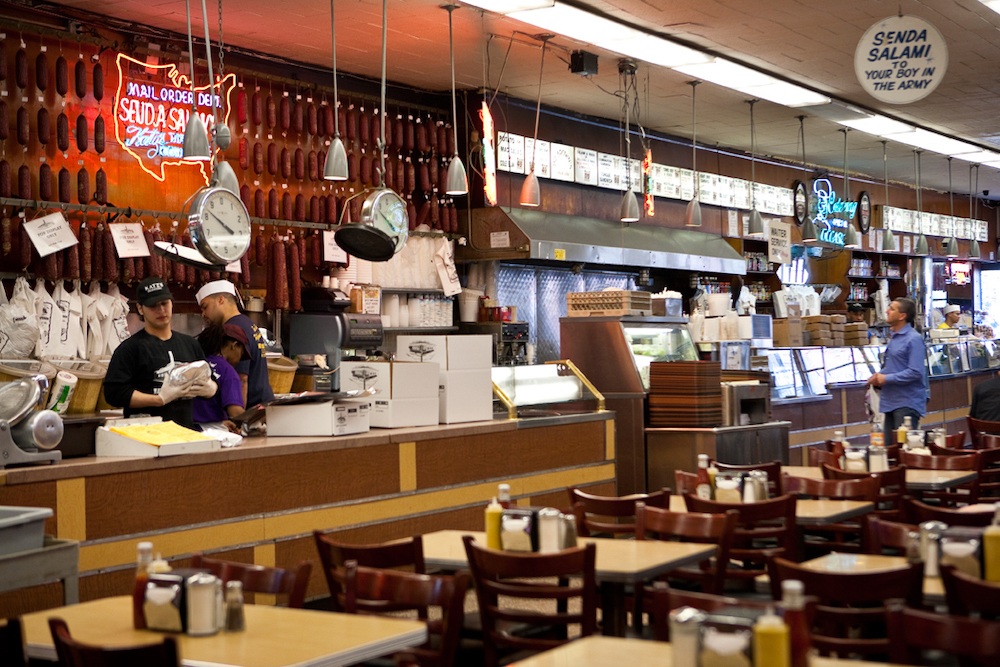 Katz's deli counter is a well-oiled machine, cranking out orders for mile-high pastrami sandwiches one after another. Photo courtesy of Katz's Deli. 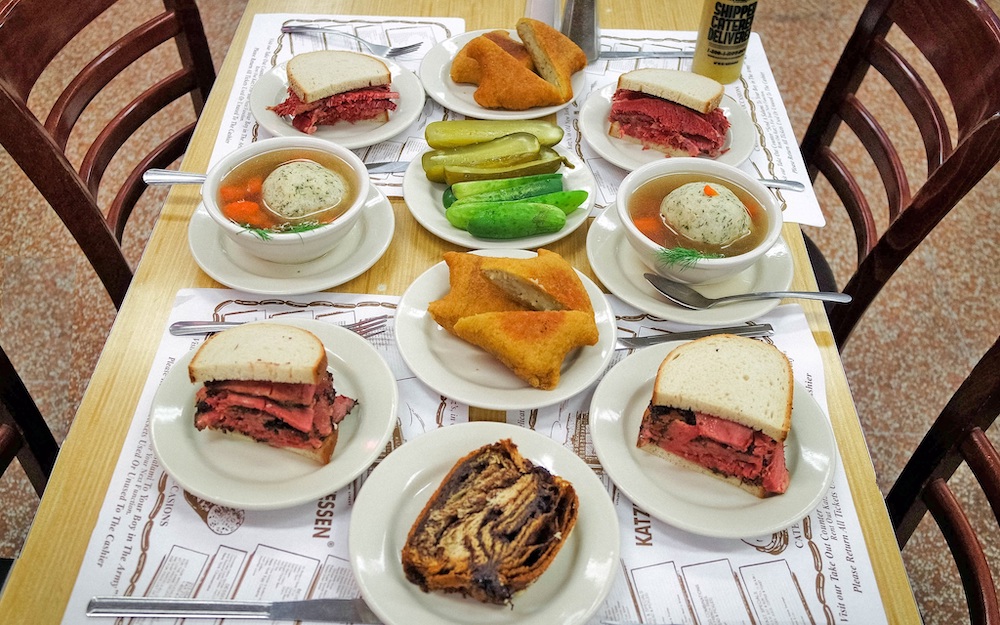 Eating at Katz's is a no-frills dining experience. With simple decor and a cafeteria-style space, the food is the real star of the show. Photo courtesy of Katz's Deli.

If you’re a Sarge’s first-timer, Andrew Wengrover, third-generation owner, recommends the Number 3 Combo Sandwich: a corned beef and pastrami sandwich with coleslaw and Russian dressing. For something a bit different, order the Blockbuster, a square knish stuffed with your choice of meat and cheese, topped with mustard or Russian dressing and sauerkraut.

The Local’s Guide to New York’s Upper East Side → 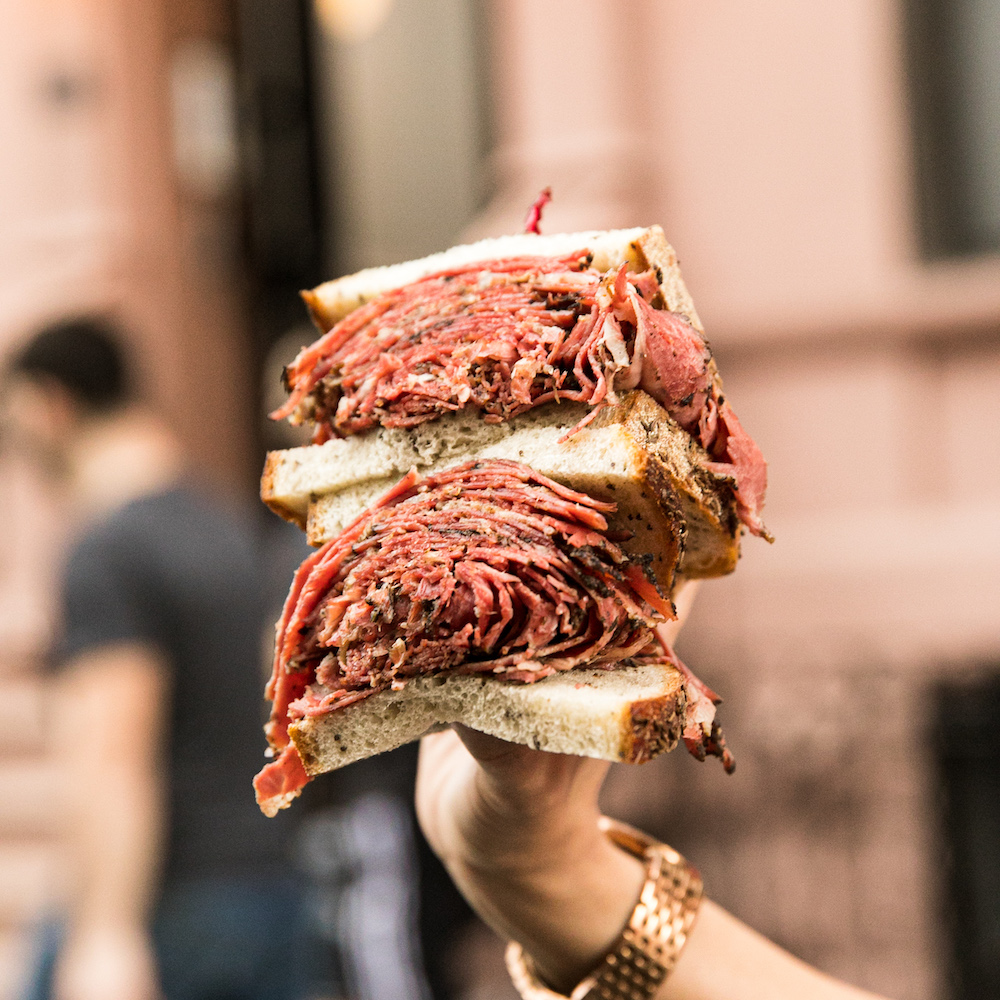 Pastrami originates in Romania and is made by curing beef brisket, a Jewish staple in itself. Photo courtesy of Sarge's Deli. 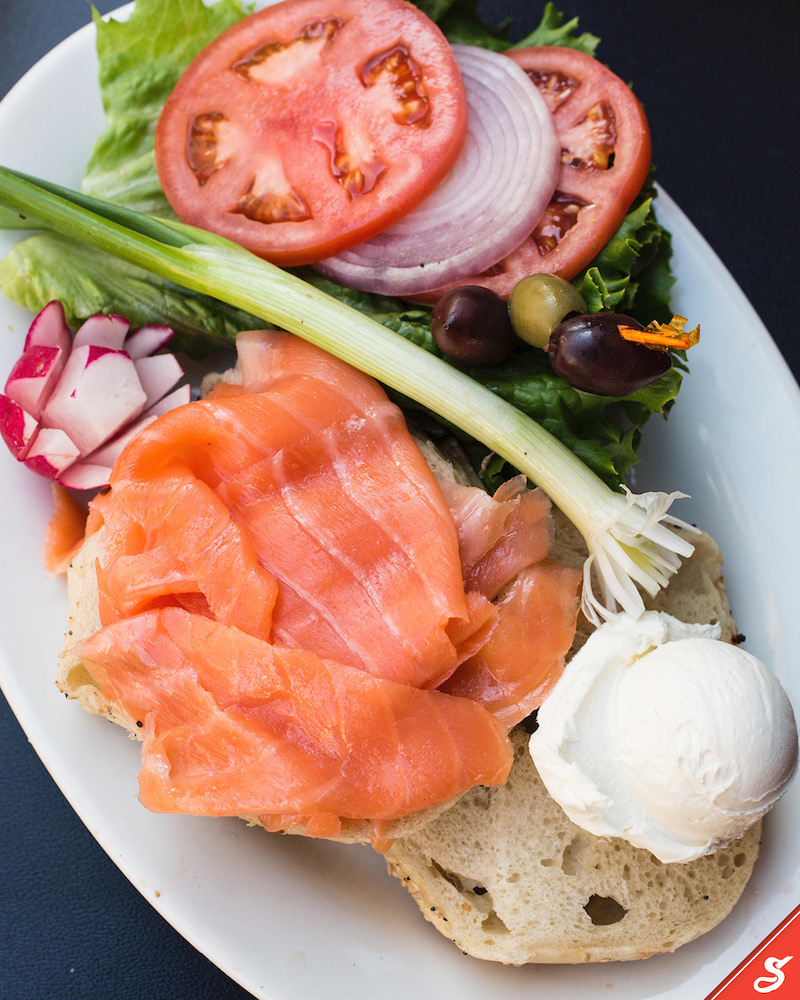 Bagels with lox and cream cheese are a classic. Try it on an Everything Bagel for an authentic New York bite. Photo courtesy of Sarge's Deli. 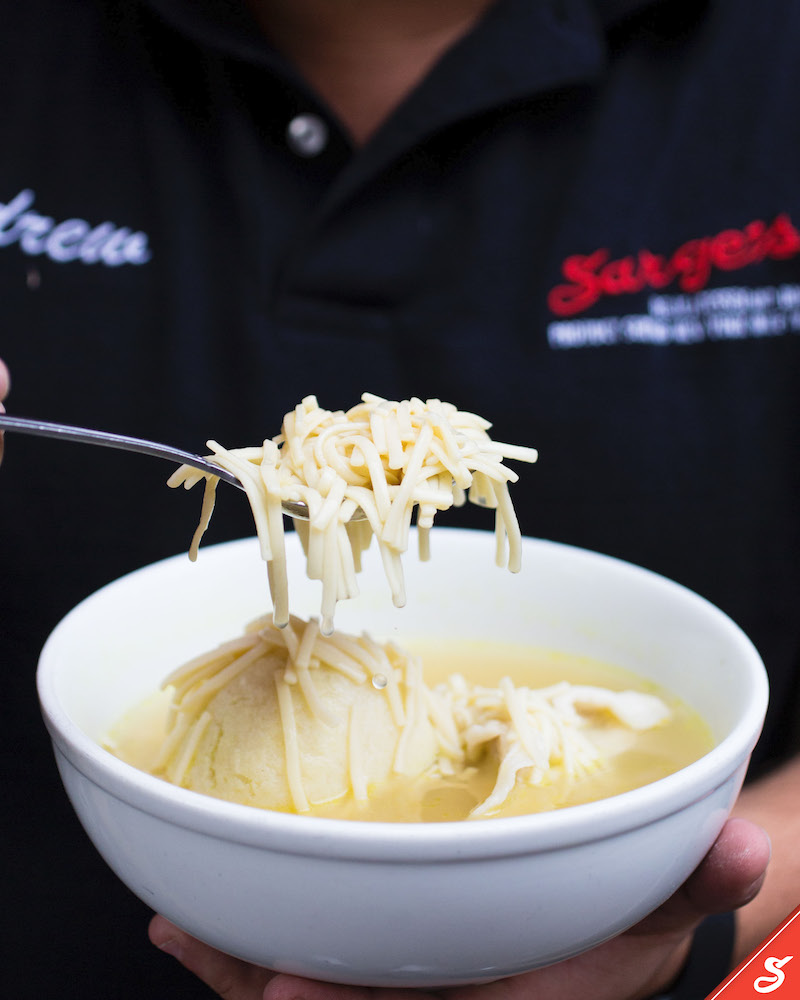 Matzo ball soup with noodles is the ultimate comfort food, perfect for a cold winter day in the city. Photo courtesy of Sarge's Deli.

Stepping into Frankel’s is like traveling back in time. Although it opened in 2016, the space is reminiscent of a bygone era, with vintage photographs and colorful signage by the legendary Coney Island sign painter Sam Moses. Expect to see classics on the menu, from potato latkes to hot pastrami Reubens, plus creative specialty sandwiches such as “The Nettie,” made with Eastern Nova smoked salmon, dill cream cheese, horseradish beets, and red onions. 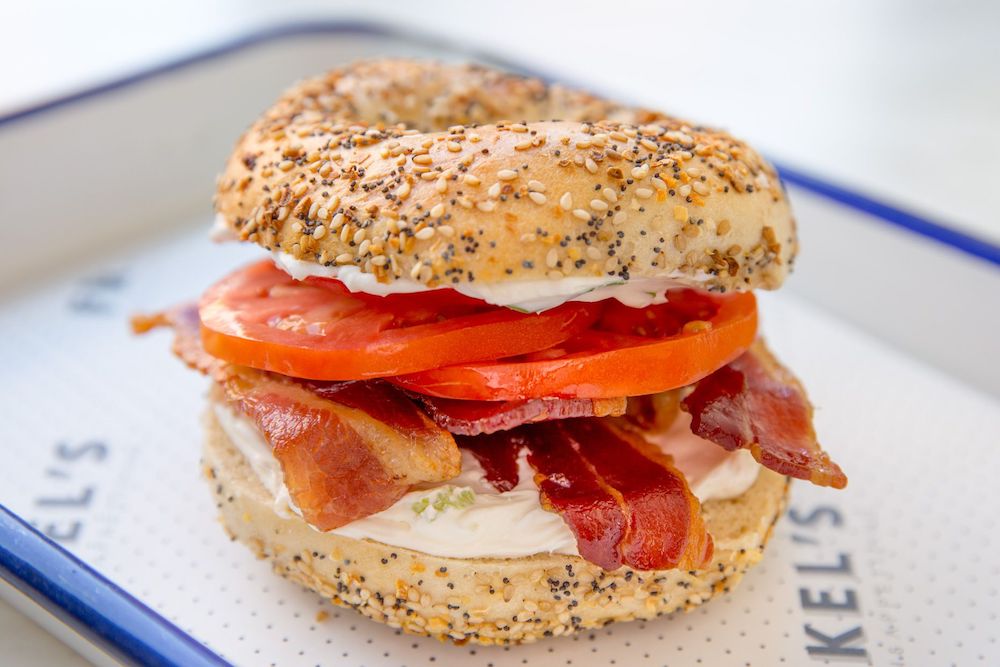 Though not authentically Jewish, this bacon, tomato, and scallion cream cheese bagel is perfect if you're not quite ready to commit to lox. Photo courtesy of Frankel's Delicatessen. 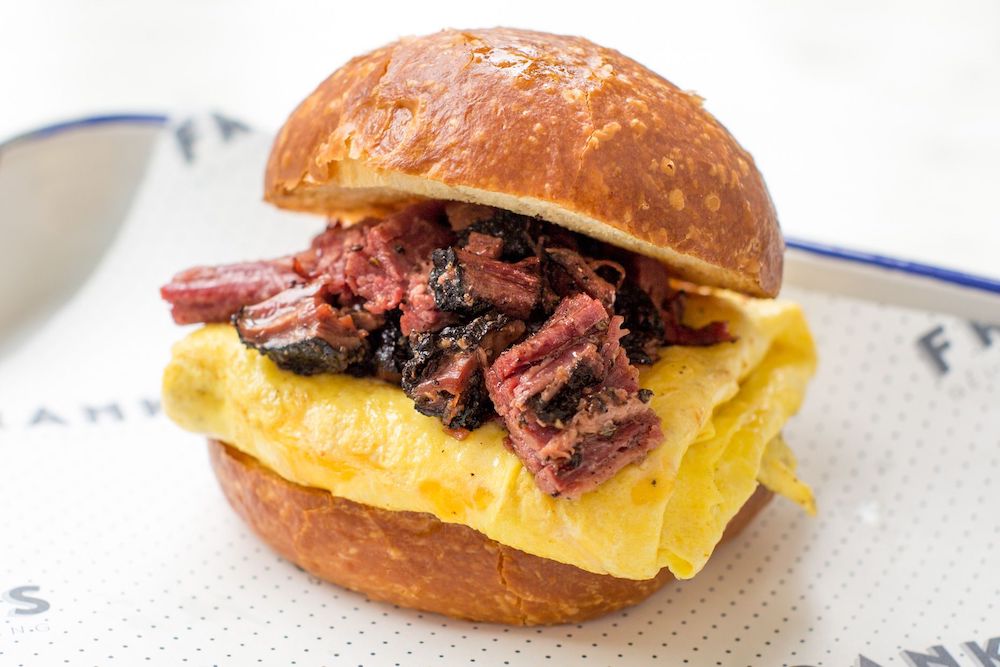 This pastrami, egg, and cheese on a Challah roll is a Jewish-style take on the classic BEC. Photo courtesy of Frankel's Delicatessen. 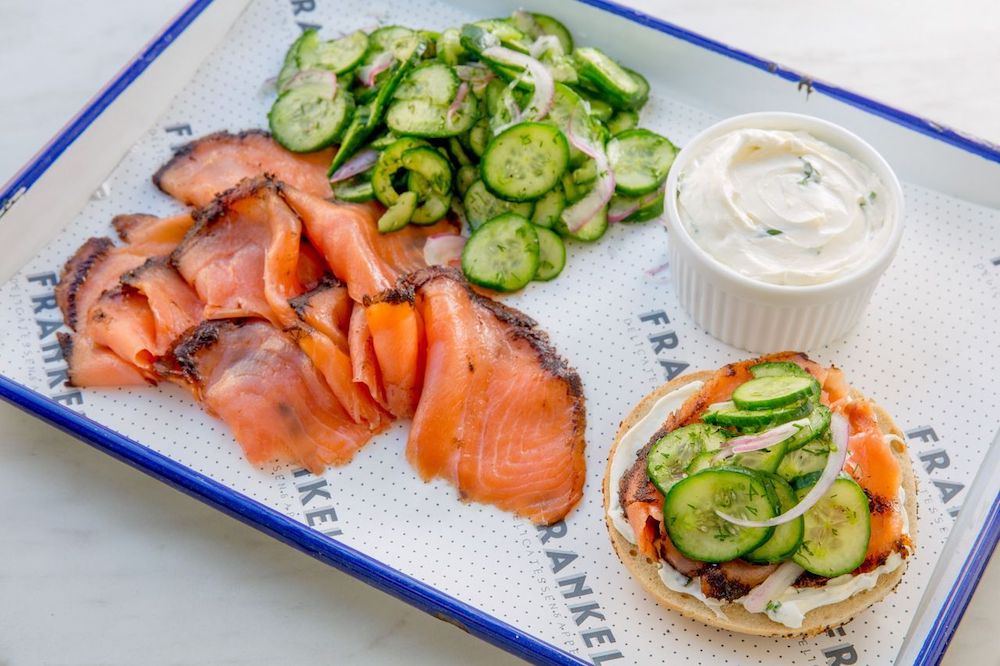 Aptly nicknamed “The Sturgeon King,” a visit to Barney Greengrass means sampling some of their smoked fish (their gently smoked sturgeon is a must-try). Besides their to-go counter, they also have casual seating and a separate dining room with walls covered in sepia-toned murals. Don’t be surprised if the interior looks familiar—Barney Greengrass has appeared in a number of movies and TV shows, including Law and Order, Seinfeld, and You’ve Got Mail. 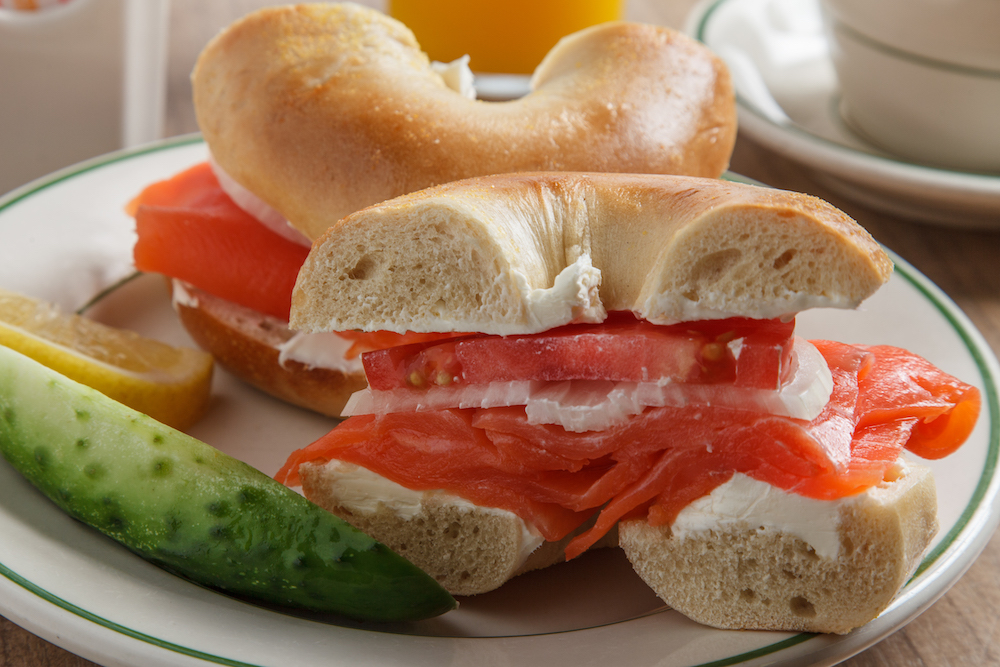 Barney Greengrass's bagels are movie stars in their own right, having appeared on countless shows and movies set in NYC. Photo by Jonathan Bumble. 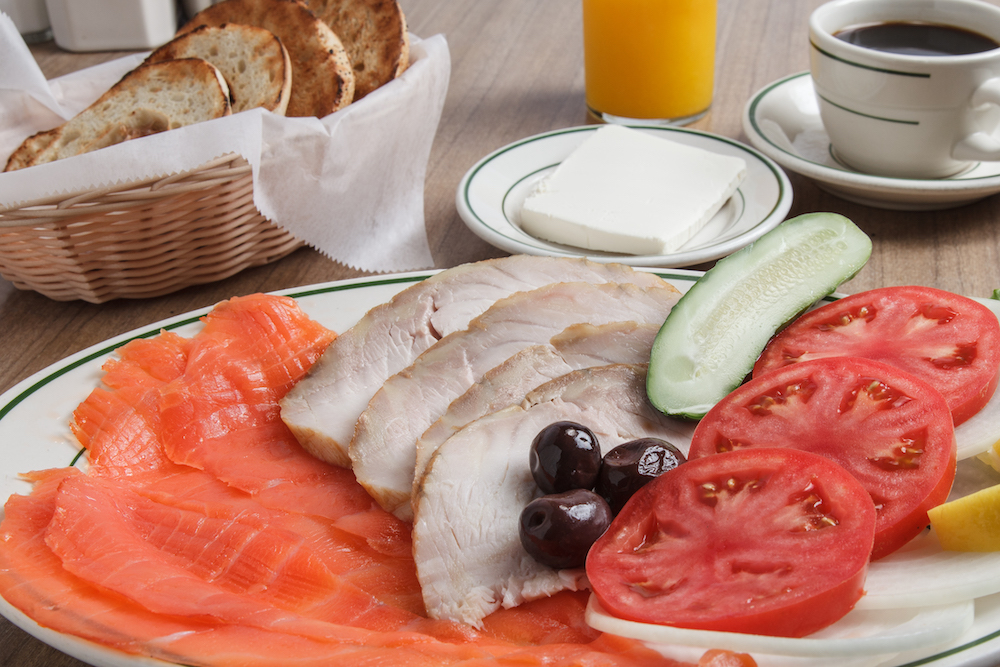 Barney Greengrass has set the standard for Jewish delis for over a century. Photo by Jonathan Bumble.

Known for their larger-than-life sandwiches, creamy cheesecakes, and pillowy-soft potato knishes, Carnegie Deli is just as famous as its celebrity patrons. The historic deli has been in business since 1937 and today is helmed by its third-generation owner, Sarri Harper, and her mother, Marian. “My grandfather Milton Parker, or as he is lovingly known, The Corned Beef and Pastrami Maven, turned Carnegie Deli into an icon for many of the city’s most famous entertainers,” shares Harper. From Stevie Wonder to Stephen Spielberg, tons of celebs have frequented Carnegie.

Two of the most popular options at their Madison Square Garden location are the corned beef and pastrami sandwiches. According to Harper, “Rangers fans love their hot pastrami sandwiches and we can’t argue with the Broadway Blueshirts!” 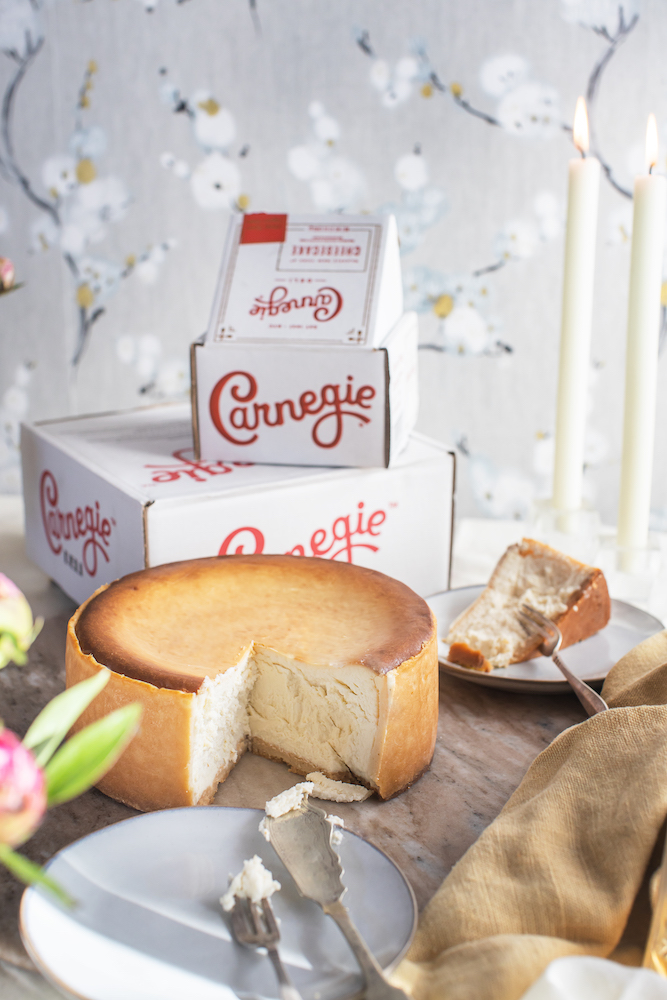 Since 1937, Carnegie Deli has been serving up classics like New York cheesecake, kosher franks, and hot pastrami sandwiches. Photo courtesy of Carnegie Deli. 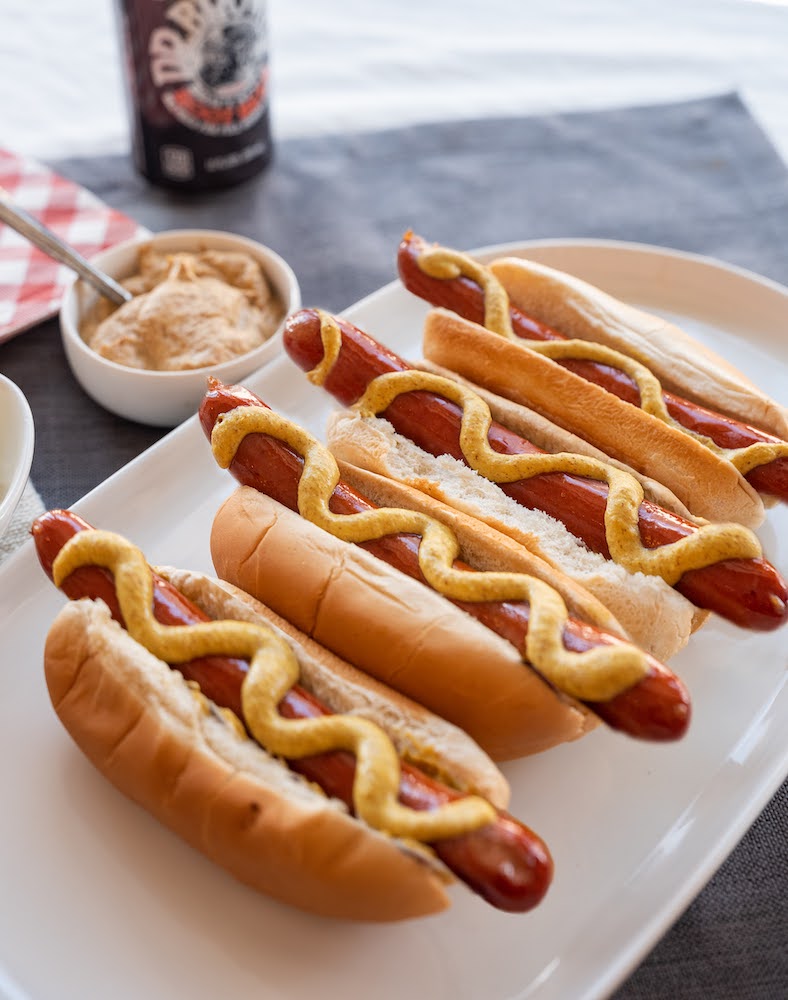 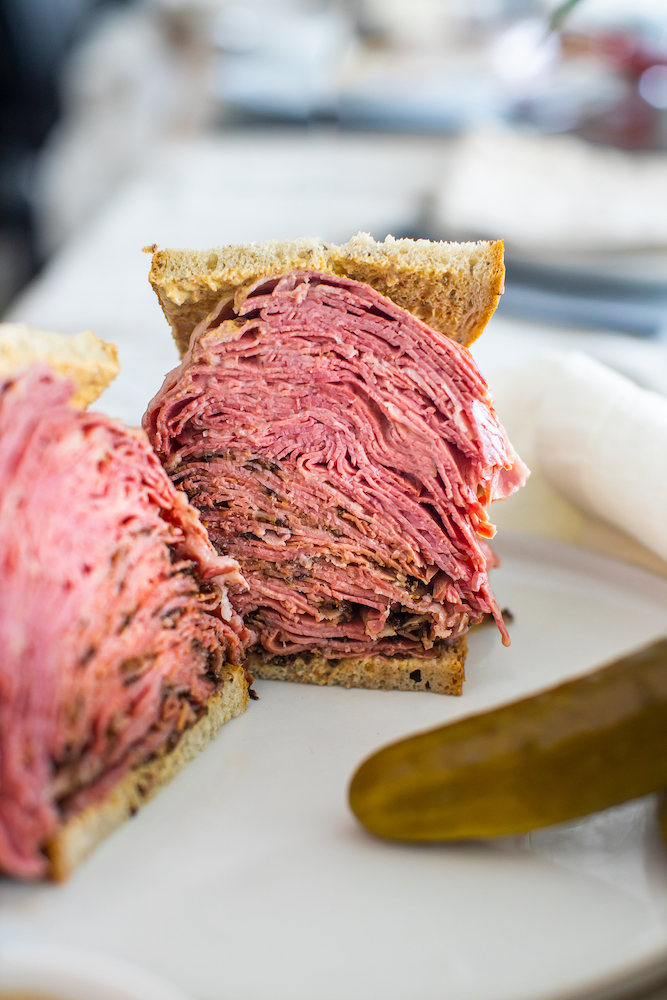 These mile-high sandwiches may be a challenge to eat, but the flavors are worth the mess you'll inevitably make. Photo courtesy of Carnegie Deli.

Russ & Daughters is a fourth-generation Lower East Side appetizing shop synonymous with high quality smoked fish, fresh bialys, and decadent babka. “Appetizing shop” is a term for the dairy counterparts of Jewish delis. Because of Kosher dietary laws, these shops carried fish and dairy, whereas “delis” sold meat. Founded in 1914 by Joel Russ, Russ & Daughters is the first business in the country to have “& Daughters” in its name after Russ made his three daughters partners. Here, bagels are made the traditional New York way, by boiling first and then baking. While you’re here, don’t miss the famous smoked salmon and pickled herring. 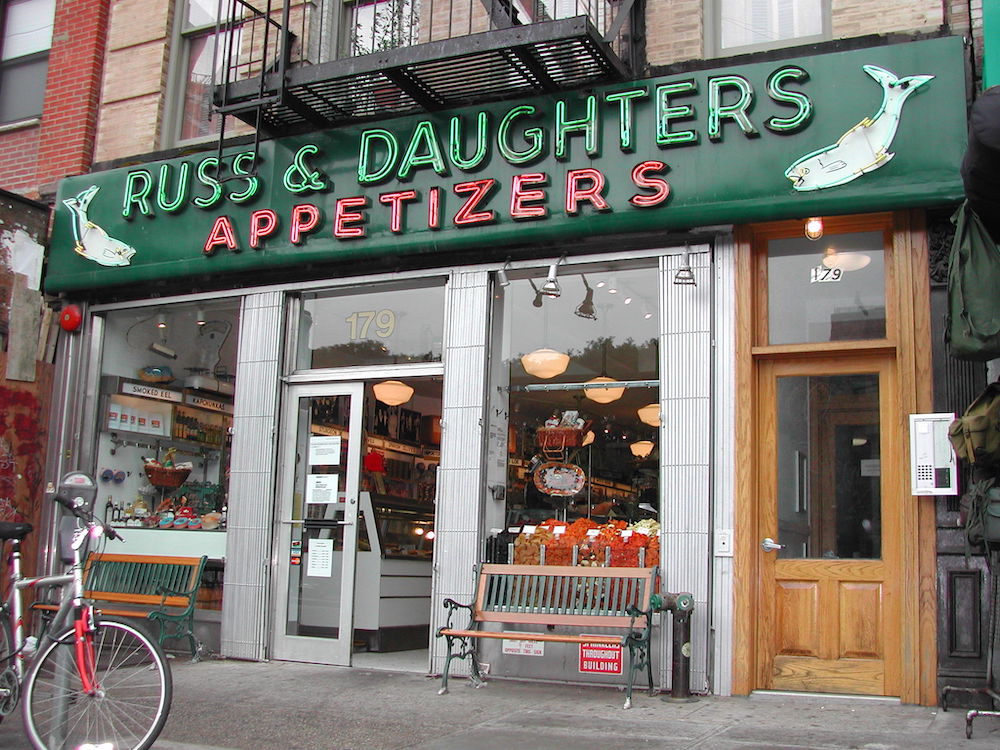 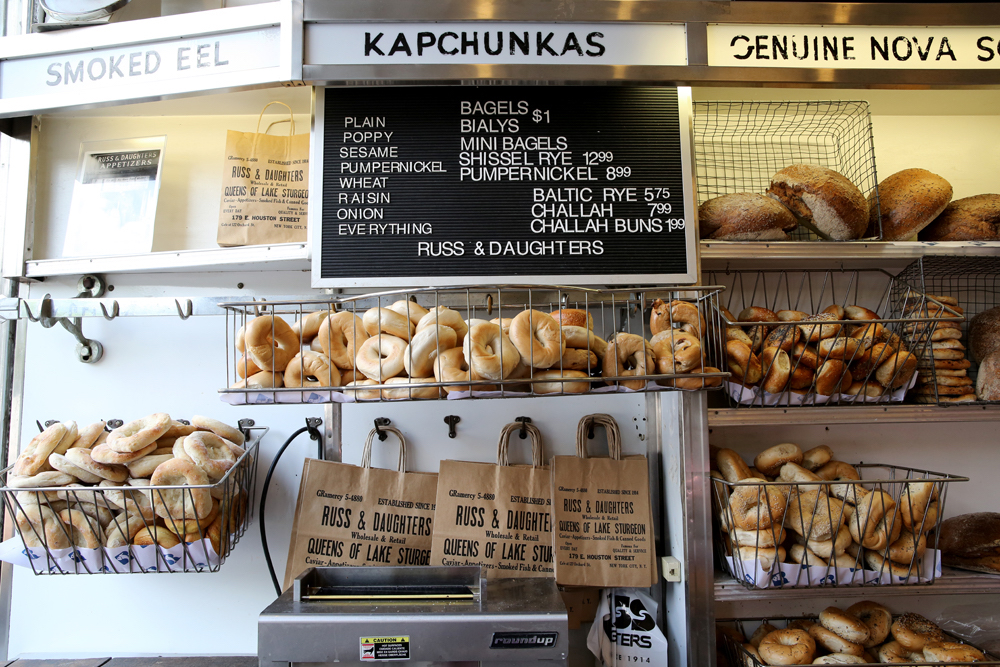 At just $1 per bagel, you have no excuse not to bring home a bag of these hand-rolled delights. Photo courtesy of Russ & Daughters. 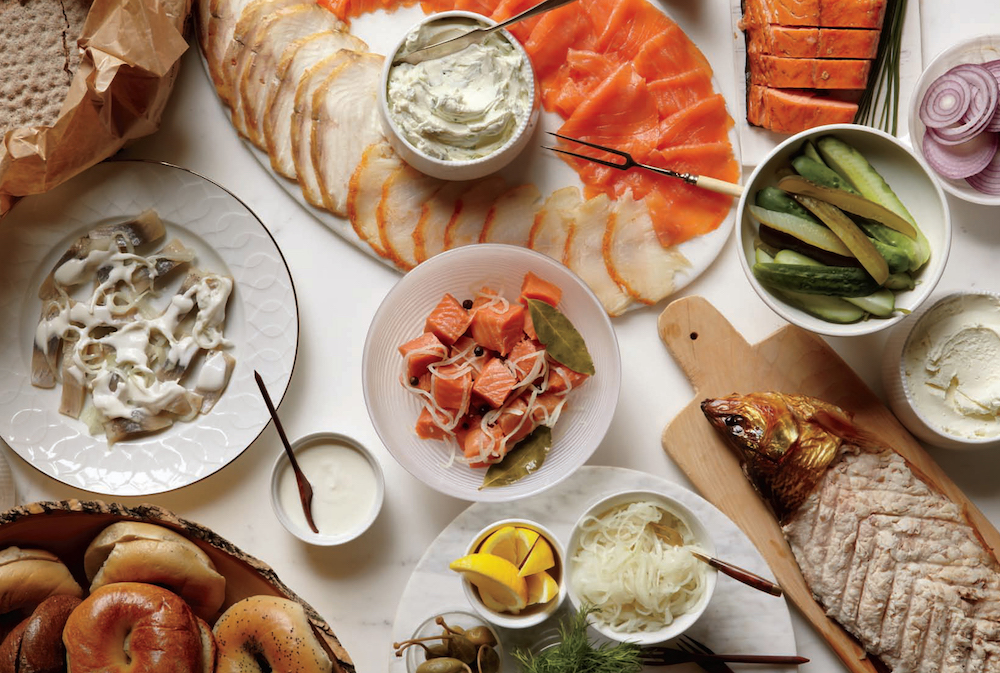 Russ & Daughters has all the markings of an authentic Jewish appetizing shop. From in-house smoked fish to fresh bagels and kosher dills, it's the perfect brunch spot. Photo courtesy of Russ & Daughters. 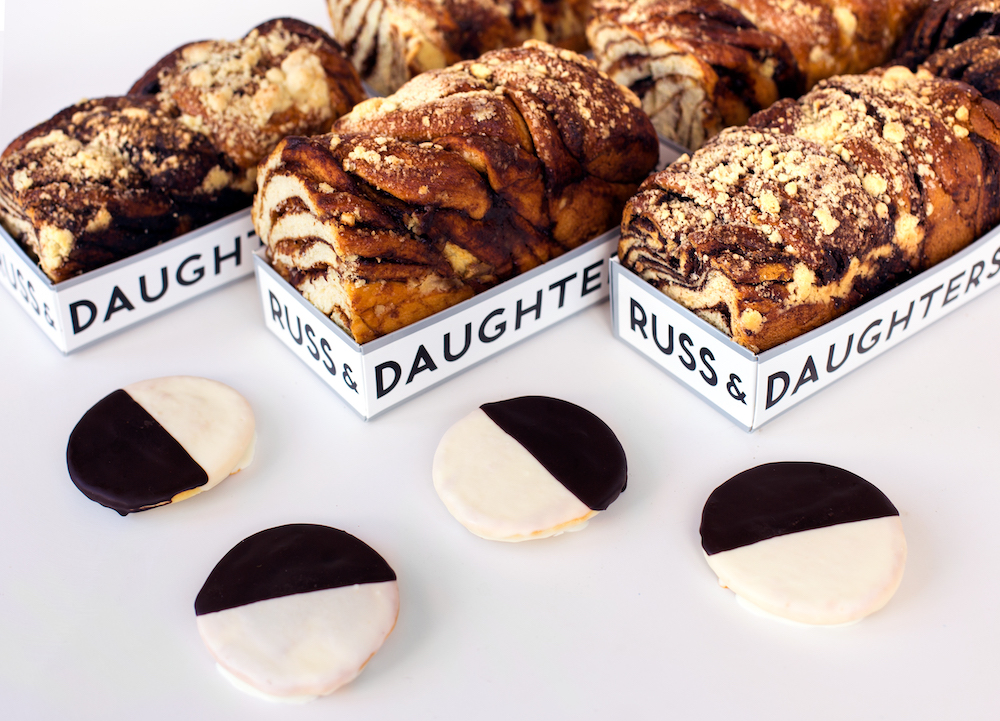 Inspired by delis in Montreal’s Mile End neighborhood, a Jewish community, Mile End Deli brings a bit of Canada to the States. Here, traditional Jewish comfort food is paired with Canadian classics for an exciting twist, like poutine topped with smoked meats. The deli uses from-scratch cooking techniques, fresh ingredients, and recipes inspired by its founder’s grandmother to create their nostalgic dishes.

At Pastrami Queen, smoky, melt-in-your-mouth pastrami is stacked high on Orwasher’s rye bread and washed down with Dr. Brown’s soda. A favorite of Anthony Bourdain’s, he once shared that Pastrami Queen was his go-to for pastrami sandwiches in New York. 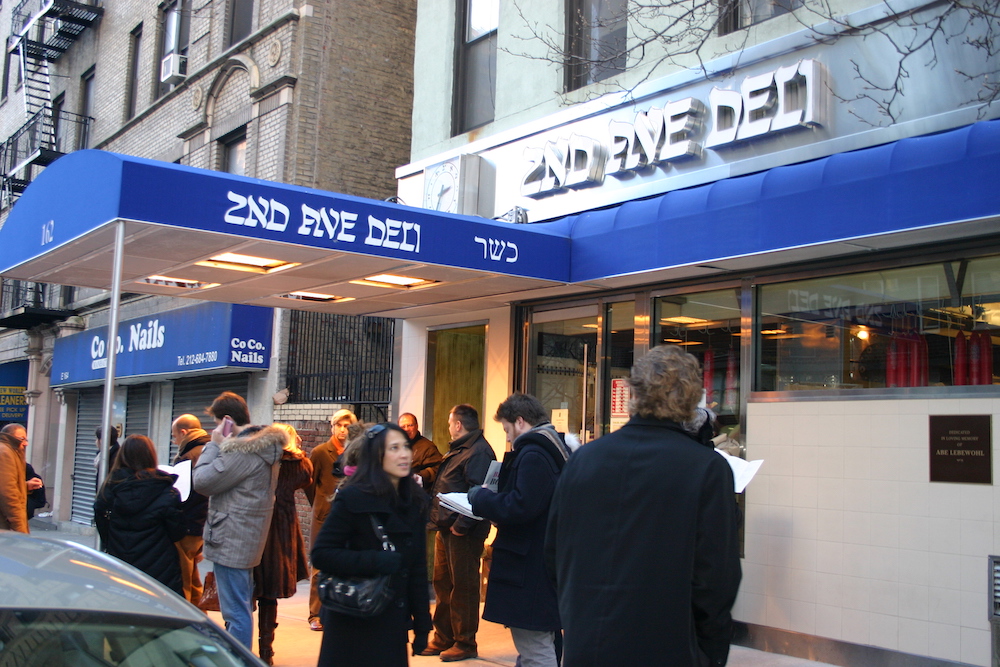 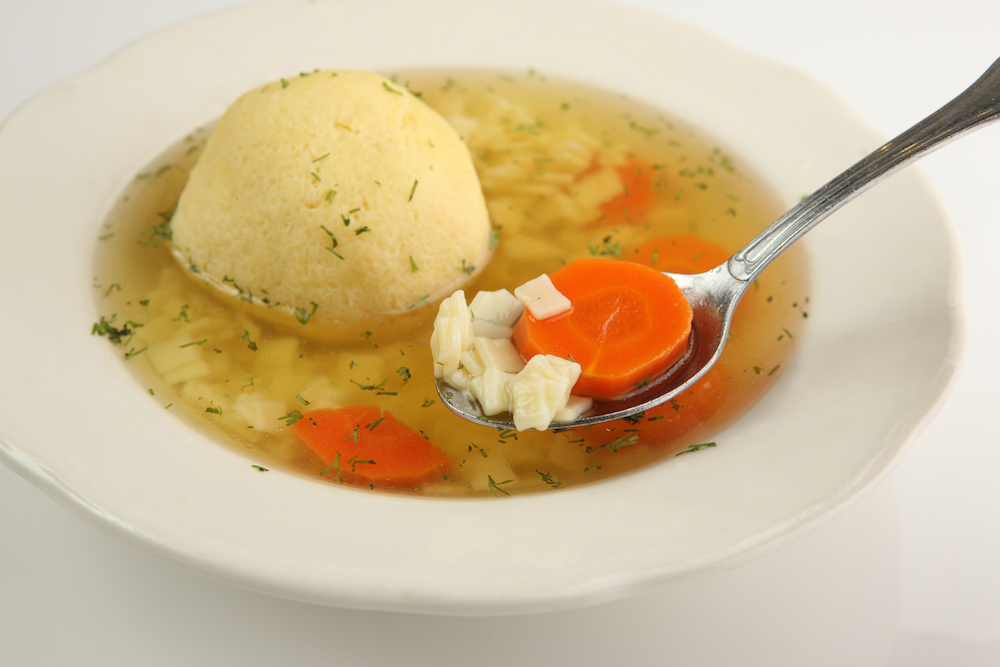 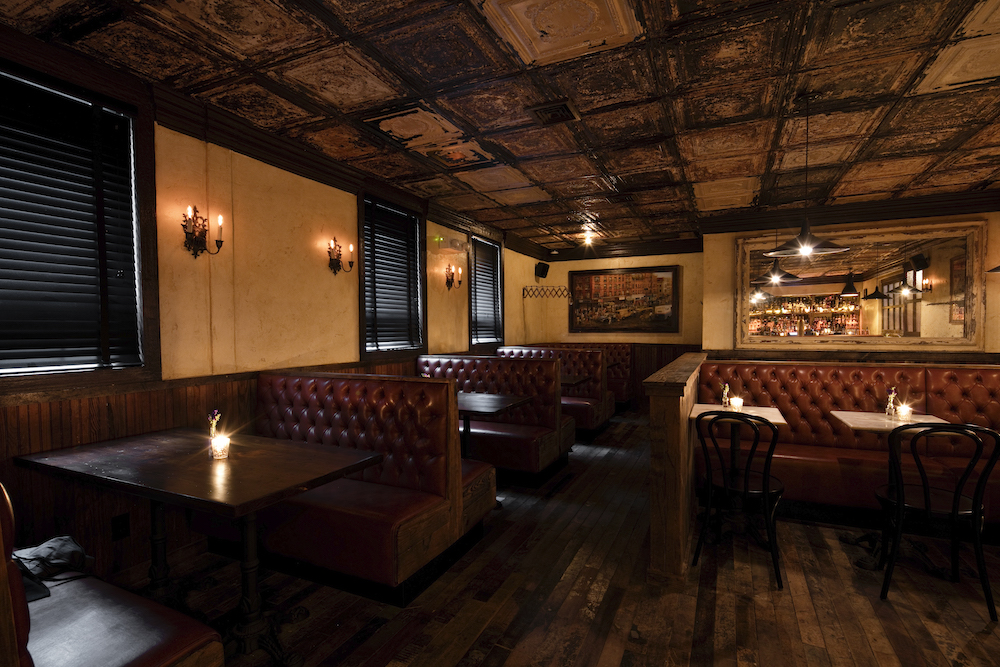 The upstairs dining area outfitted with retro red-leather booths is the ideal atmosphere to chow down on a steamy bowl of matzo ball soup. Photo courtesy of 2nd Ave Deli.

Both 2nd Avenue Deli locations offer quintessential Jewish food, such as frankfurters, kasha knishes, and chicken schnitzel, as well as harder-to-find delicacies, such as ptcha, or jellied calves feet. Their uptown spot also has a cocktail lounge, called 2nd Floor, right above the shop.

Considered a New York staple, Ben’s Kosher Deli has been making potato pancakes, hot open roast beef sandwiches, and rugelach since 1972. Try Ben’s Fresh Turkey Wrap, which is made with cranberry sauce and tastes like Thanksgiving dinner. The deli also recently rolled out a plant-based menu, which includes a plant-based “corned beef” Reuben and a meatless burger.