The Best Bars in New Orleans Beyond Bourbon Street

Tell someone you’re heading to New Orleans and they’ll look at you in the same way as if you were heading to Amsterdam: “Oh, I know why you’re going there.” But as is the case with The Netherlands’s most notorious city, to limit your experiences in New Orleans to only the places people outside it know best, is to cut yourself off from some of the most dynamic, interesting, and emblematic parts of the city.

Bourbon Street’s gaudy bars with neon lights beckoning you to check out “Girls! Girls! Girls!” are indeed worth the stop. Lean just so on the black and white street sign to snap a photo with the “Big Ass Beer” guy. Amble away from Canal Street and toward what’s colloquially called Gay Bourbon—a stretch of bars with rainbow flags flying proudly in the breeze—and grab a purple drank at Lafitte’s Blacksmith Shop.

But then it’s time to get out of there and venture towards bars like these five—those that prove some of New Orleans’ best beer, wine, and spirits are found off the main strip of Bourbon Street. 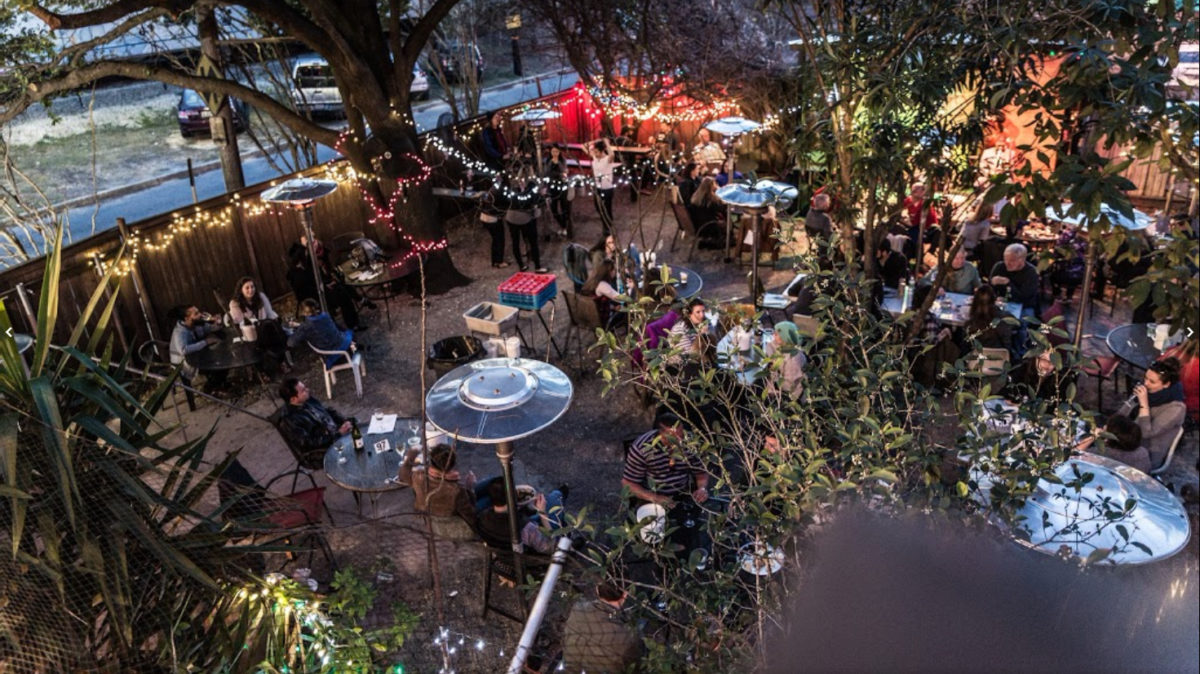 Sit back and sip on a tall glass of wine in Bacchanal's charming outdoor courtyard. 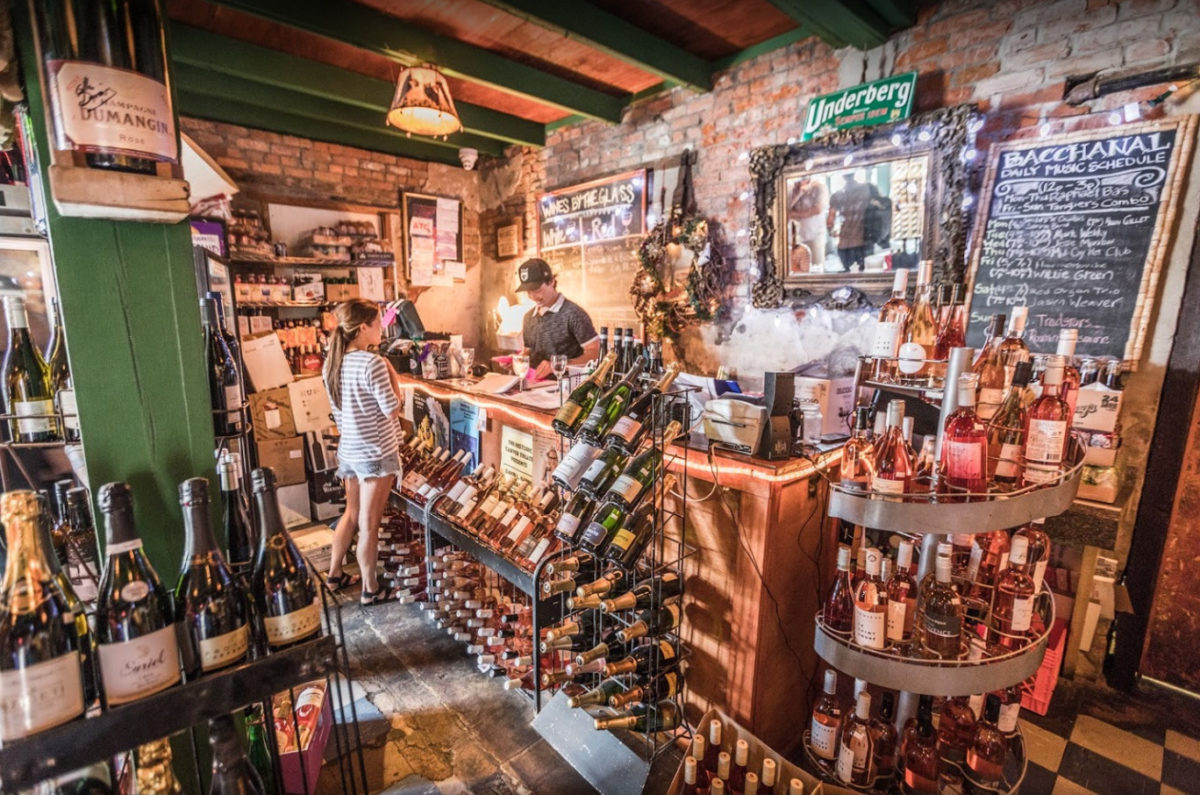 Bacchanal's wide selection of wines is just as inviting as the atmosphere.

The line to get into this Bywater neighborhood wine bar typically curls around the corner of the building, but its offerings are well worth the wait. Most first-timers tend to get confused, so here’s the drill: Once you step inside, pick a bottle of wine and, if an expertly-arranged cheese board is your thing (which it should be) select a few slabs of brie, cheddar, and Humboldt Fog from the fridge case for the waiter to bring to your table. Pay at the register, then grab a few glasses and a bucket of ice on the way to your seat. You’ll hear live local music as you relax. Full kitchen offerings are available at a window in the courtyard, and a cocktail bar is tucked away upstairs. Whatever corner you land in at Bacchanal, it’ll be the right one.

Any New Orleanian with an appreciation for natural wines would be right to point you toward St. Germain Wine Bar. Along with fresh bread, butter, and cheese made in-house, the French-inspired gem features a pebbled courtyard where you can relax with a bottle of wine selected by their knowledgeable staff. If you’re lucky enough to snag dinner reservations during vegetarian week, do so; whatever’s coming out of their inventive kitchen will have you seeing veggies in a whole new light, so don’t sleep on the crudités platter if you sit at the bar. 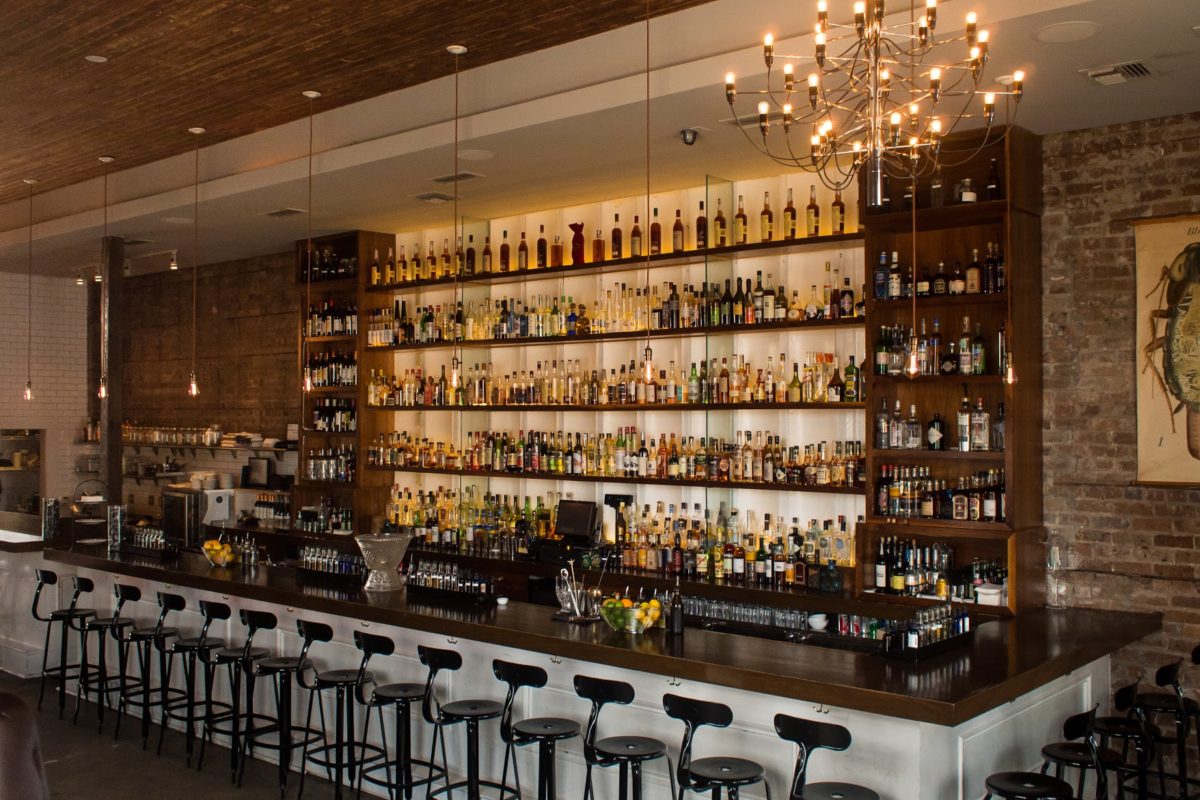 The upscale design at Cure, a James Beard Award-winning bar in the Freret neighborhood.

New Orleans is often credited for being the birthplace of the cocktail, and the city’s appreciation for shaken and stirred libations has rarely waned—even in the face of natural disaster. This 2018 James Beard Award winner is rightly considered the MVP in helping recreate the post-Katrina cocktail scene. Cure’s arrival in 2009 solidified the notion that when in New Orleans, one should be able to land at a good bar and get a well-crafted drink at a moment’s notice. That’s still the case today at this neighborhood classic whose reputation extends far beyond the city limits. Be sure to ask what the daily punch is.

If one of the things you’re looking forward to most in New Orleans is the bars that never issue a last call, remember that those opportunities extend beyond Bourbon Street. At the Avenue Pub, even the most discerning beer drinker will find a well-trained staff and a litany of taps that’ll make it hard to choose just what suds to sip on. Housed in a large St. Charles Avenue home on a street with views of the city’s postcard-worthy streetcar line, the pub maintains a close relationship with its providers—meaning they often get access to an exclusive, ever-changing selection of unique barrels that other bars just can’t compete with.

If slowly sipping a glass of wine or enjoying the aromatics of a carefully-constructed cocktail isn’t exactly the experience you hoped for in New Orleans, head to Kajun’s Pub—or better yet, head to Kajun’s once you’ve already warmed up with the other options. This St. Claude Avenue karaoke bar is the kind of place where you’ll just want a vodka-soda or a can of local beer tucked into a koozie you brought yourself—the real reason to visit is to get on stage and belt out a Whitney Houston classic or watch strangers become friends as they tackle Journey’s classic hits. The tiny stage tucked into the front corner of Kajun’s is the place where drunken dreams come true—just don’t let your friends save their videos of your performance.