All across Canada, Indigenous chefs are reclaiming their ancestral cuisine. With inventive dishes like stinging nettle gnocchi, juicy bison burgers, and Inuit fusion cuisine, celebrity chefs like Rich Francis, David Wolfman, and Joseph Shawana have paved the way for a generation of young Indigenous cooks to get creative and entrepreneurial. Below, this coast-to-coast Indigenous food round-up of restaurants and unique culinary experiences offers a deep dive into some of the oldest cooking in North America. 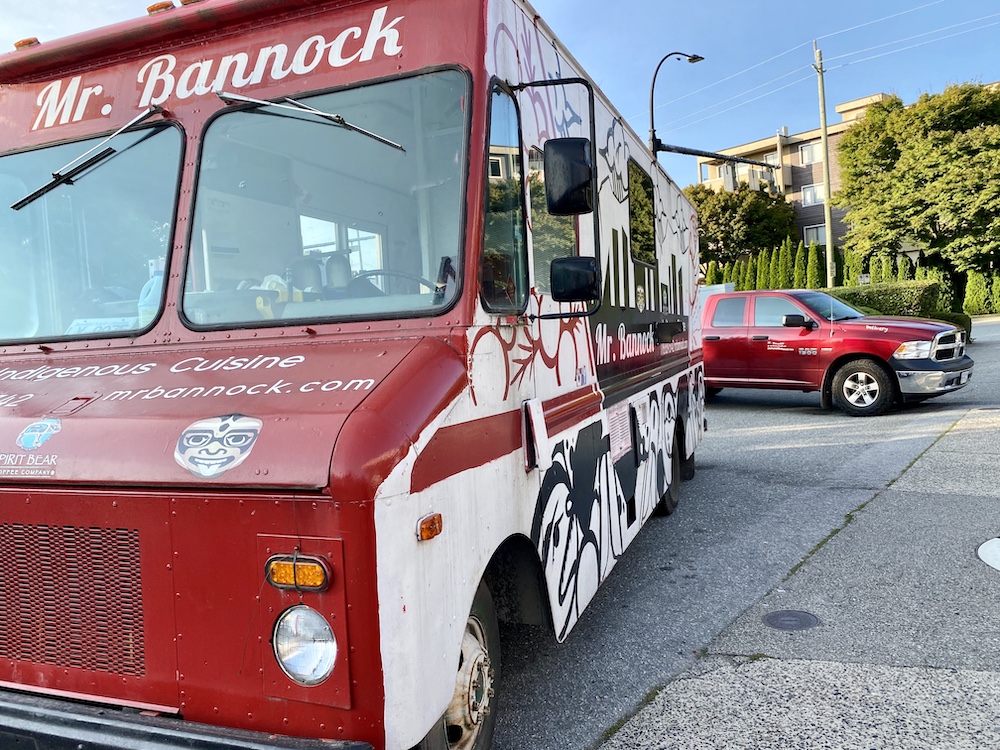 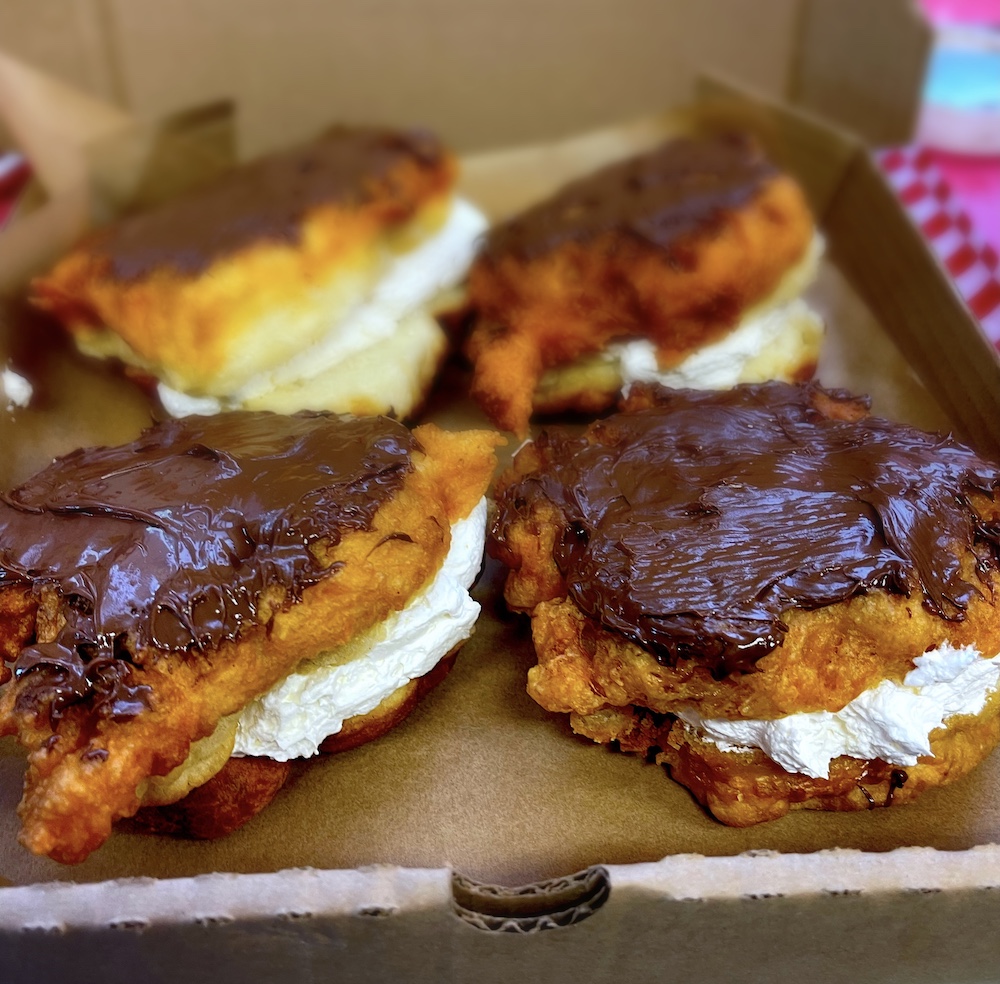 In Cree, Han Wi means “night sun,” the special time of the day between sunset and moonrise. The Han Wi hands-on dining experience in Wanuskewin Heritage Park near Saskatoon, Saskatchewan, promises to be one of your most memorable moonlit meals. Wanuskewin is a community park on ancestral land, purpose-built for urban indigenous kids and settlers to celebrate Cree and Dakota First Nations’ history, food, and agriculture. The dinner you’ll cook (overseen by Chef Jenni Lessard) is made from foraged and local ingredients, starting with bannock that’s been wrapped around a stick and cooked over a fire, marshmallow-style. The bannock is served with birch butter and a jam of Saskatoon berries, blueberries, raspberries, and chokecherries. Entrees may include Bison tenderloin seared in rosehip butter and served with sunchoke nettle, potato puree, and smoked chanterelles. As you prepare the meal, chefs and elders will explain each ingredient’s significance. You’ll wrap up the evening with a cup of hot muskeg tea while listening to Cree myths and history. 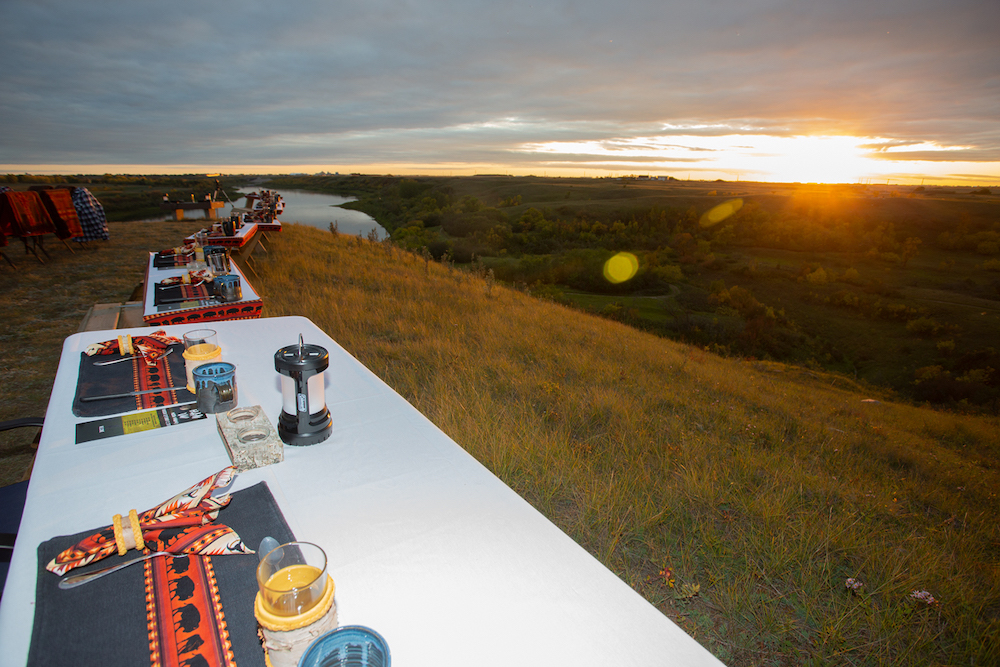 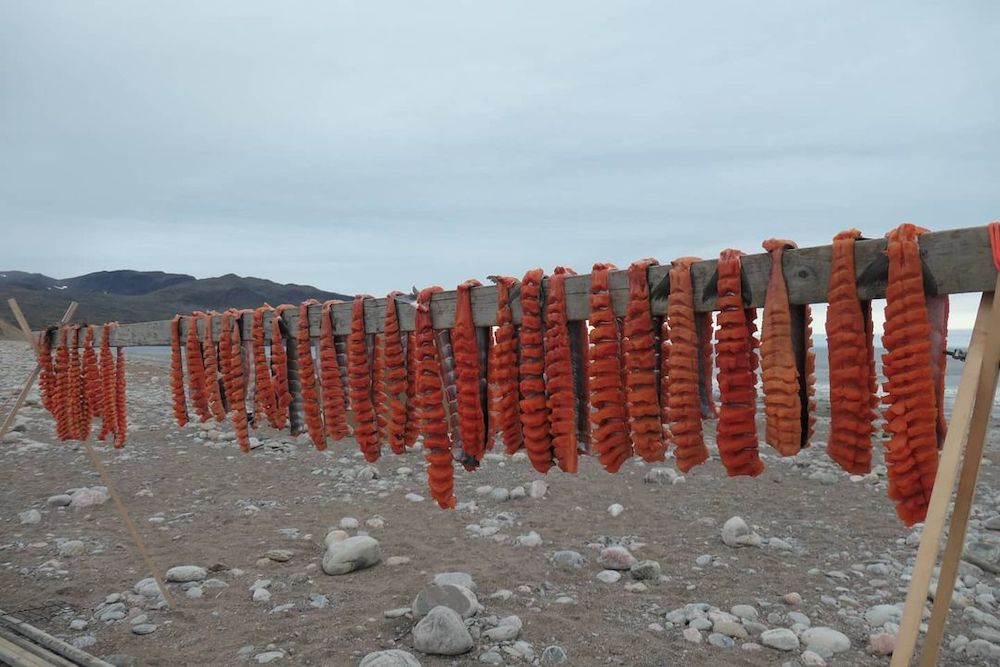 Cook Along with Chef Scott Iserhoff

One of Edmonton-based chef Scott Iserhoff’s earliest memories is smoking geese over the fire with his grandparents. Today, he shares memories and recipes through his online Pei Pei Chei Ow cooking school. Sign up to try your hand at duck stew or risotto with a smoked duck stock. A member of the Mushkego Cree, Iserhoff’s cooking classes try to impart the reverence his people have for “animals and the food that the land gives us.” Iserhoff sees himself as a storyteller and uses food to have conversations about Indigenous issues. Says Iserhoff, “For us, food has always been medicine. I want to teach settlers and indigenous youth about eating river fish, moose meat, and berries. That’s what our ancestors ate. It’s like relearning everything that we’ve always known.” One of Iserhoff’s signature dishes is a breaded, deep-fried spam. On the reservation, spam and other canned food are staples, while fresh ingredients are often prohibitively expensive.

Chow Down on Tomahawk Potato Chips

In 2015, Alfred Lea started the Native Canadian Chip Corporation and launched his first product, Tomahawk potato chips. The chips come in a variety of tempting flavors such as ketchup, smoky barbeque, and the signature Sweet and Spicy Fire. They’ve won an audience among salty snack lovers, but the chips have also caught the eye of art appreciators. The packages of each flavor features a work of art by a different emerging Indigenous Canadian artist, who is also supported through chip sales. As for the name of the chips: Lea said he’s reappropriating the word tomahawk, a historical Indigenous tool that has since been appropriated. “Hollywood made the tomahawk into a weapon of war. But a tomahawk was historically used as a cooking tool to pulverize and dry meat.” 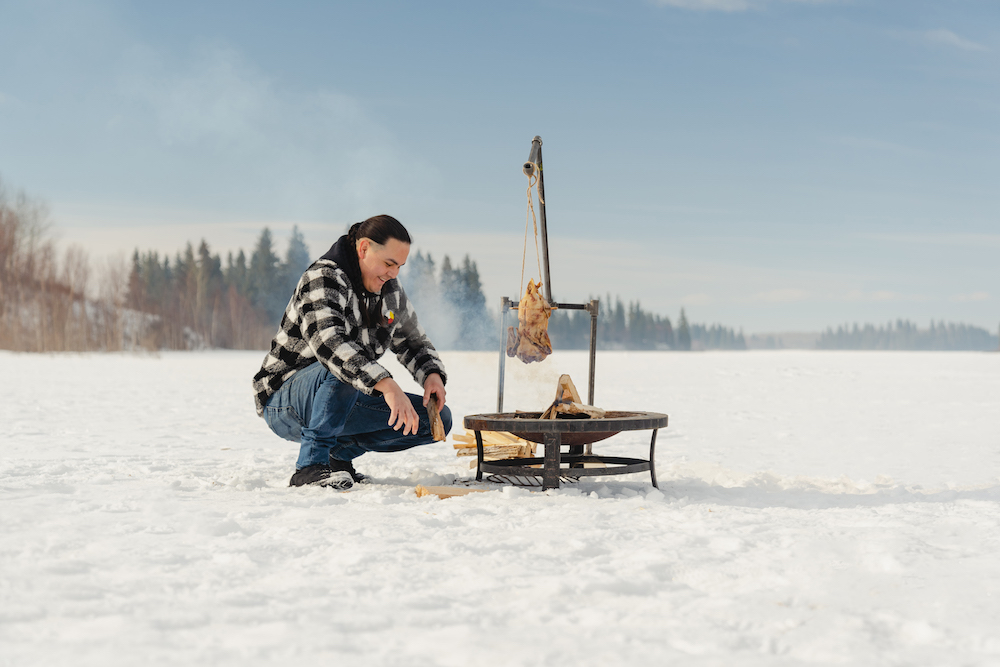 Chef Scott Iserhoff offers online cooking classes where you can learn how to cook with traditional ingredients. Photo courtesy of Indigenous Tourism Alberta. 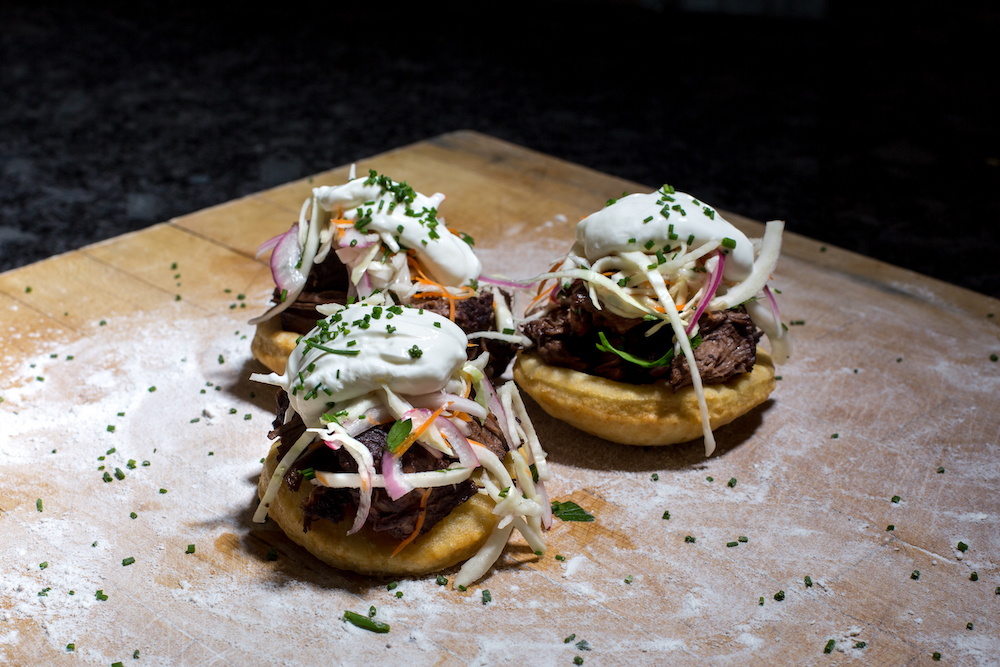 You can make chicken and mushroom tacos just like these in one of Iserhoff's online cooking classes. During the class, you'll also learn about Powwow culture and history from Iserhoff himself. Photo courtesy of Rebecca Liappiatt.

Kensington Market is a multicultural neighborhood in Toronto reflective of the city itself, and home to the hugely popular Pow Wow Cafe, owned and operated by Chef Shawn Adler. Adler is part of the Anishinaabe Nation and grew up “drooling over his mother’s Pol Martin cookbooks” and foraging with his grandparents for fiddleheads, morels, and wild burdock. He fell in love with cooking around the time he was in high school, and has since opened four restaurants in Ontario including Pow Wow, where you’ll find playful contemporary Indigenous dishes and fusion delights, such as his cult favorite “Indian tacos.” On the popular Sunday brunch menu, there’s a “McPowWow” with duck breast, bologna, and eggs on fry bread. Adler serves coffee from Birchbark, an Indigenous-owned roaster that donates a percentage of profits towards clean water filtration systems on reservations. Adler remains an advocate for ethical foraging; his YouTube foraging series takes viewers on the hunt for wild edibles, while demonstrating recipes for things like wild ginger syrup.

Highlighting the California Native Nations: A Road Trip from San Diego to Monterey → 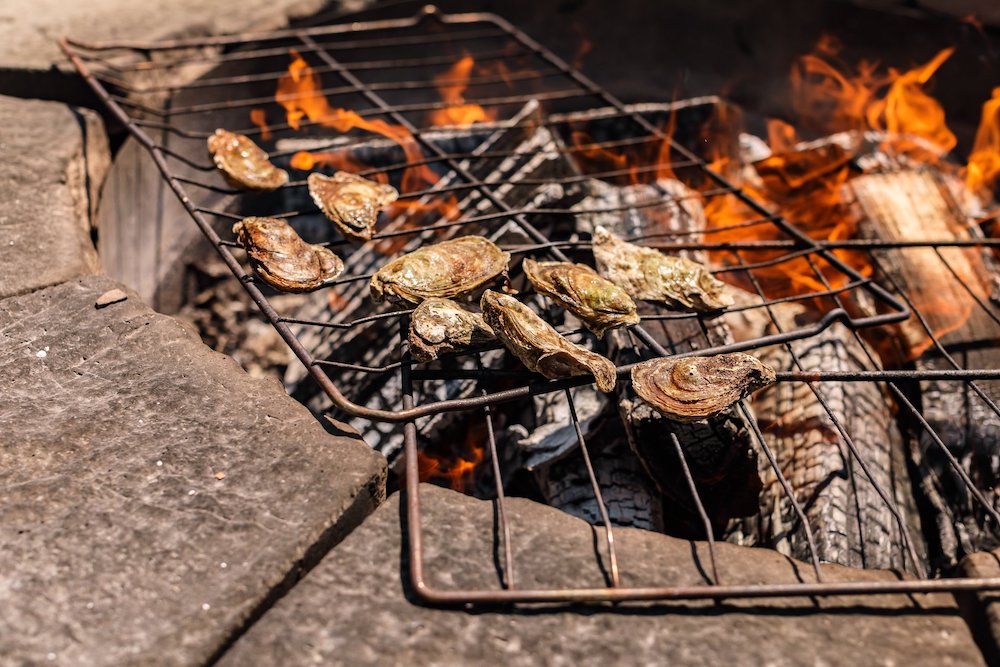 As part of an interactive cooking experience on Lennox Island, you'll learn to cook bannock and clams the ancient way: under the sand. Photo courtesy of Brady McCluskey. 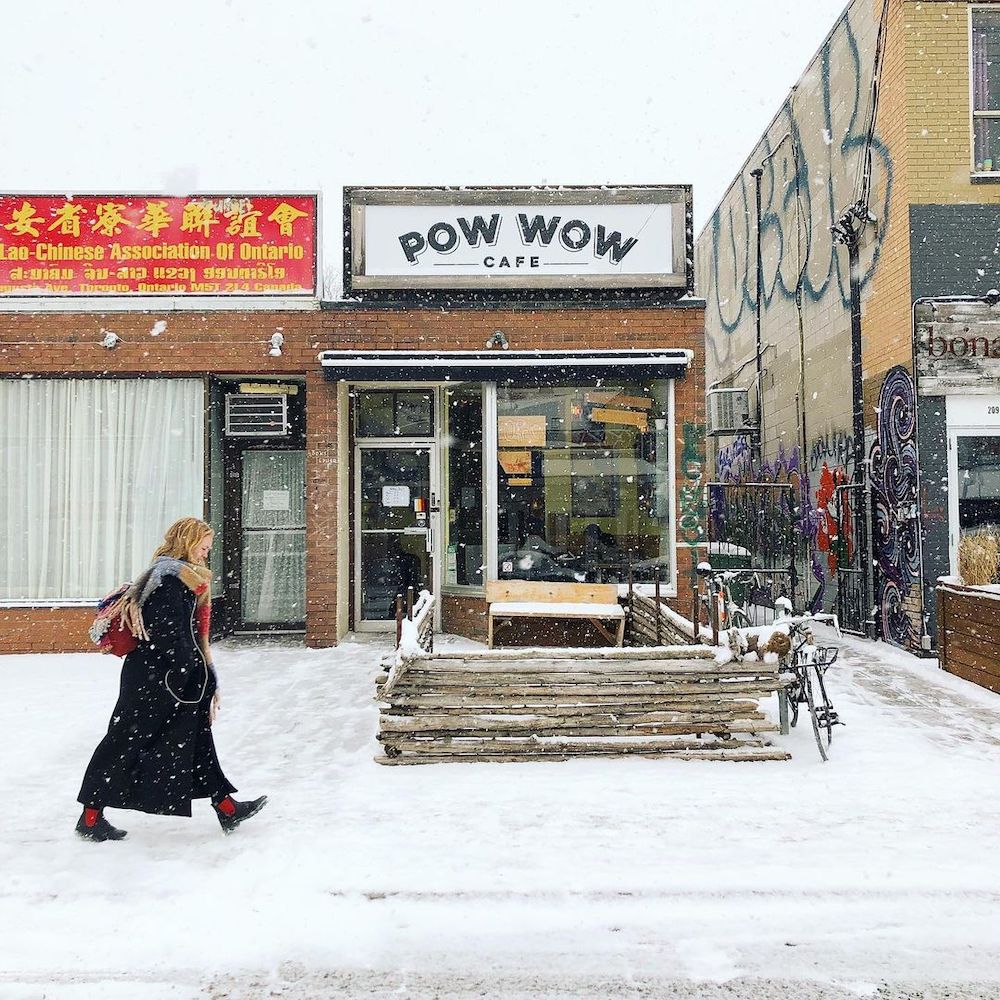 An Oceanside Feast with the Mi’kmaq People

Lennox Island is connected by causeway to Prince Edward Island, a tiny province off Canada’s Atlantic coast. The Mi’kmaq people have lived on Lennox for 10,000 years, harvesting lobster, oysters, snow crabs, and clams. About five years ago, the community began conversations with elders about food sustainability. Many spoke about their grandmothers cooking bannock and shellfish under the sand. Today, the community welcomes you to take part in a hands-on experience cooking bannock and clams the ancient way. The meal starts by digging a hole in the sand, then preparing bannock dough, burying it, and building a fire over top. While the bannock is cooking under the smoldering fire, oysters are grilled over top. These oysters, smoked in their natural juices, offer a completely different flavor than shucked oysters. Throughout the experience, members of the Mi’kmaq community share stories about growing up on Lennox Island.