Why Trains Are The Best Way to Travel in Europe

From the high-speed rails of Spain to the punctual locomotives of Germany, writer and editor Amanda Zurita reflects on the virtues of train travel in Europe—and all the madcap adventure it invites—for Here Magazine issue 08.

Shit. That wasn’t the right language. “Is this San Sebastián?”

To which she responded by walking me over to a wall-sized map of France and pointing to a speck south of Paris. Rather than the sparkling seaside town on the Basque coast, we had disembarked in the petit village of Saint-Sébastien, France. Population: 665.

It was 2010 and I was traveling across Europe equipped with a Eurail Pass, a patched-up backpack, and my then-boyfriend. I had just finished a quarter studying Latin in Rome when he met me to crisscross the continent for the summer. On this particular travel mishap (not the first of our trip, or the last), we’d been mistakenly ticketed to Saint-Sébastien when reserving our seats before departing Brussels. To make matters worse, it was a Sunday afternoon without a single restaurant open, we were broke, and the only train to Spain was an overnight departure that would cost us €125 each. We settled into the lobby and raided the vending machine. 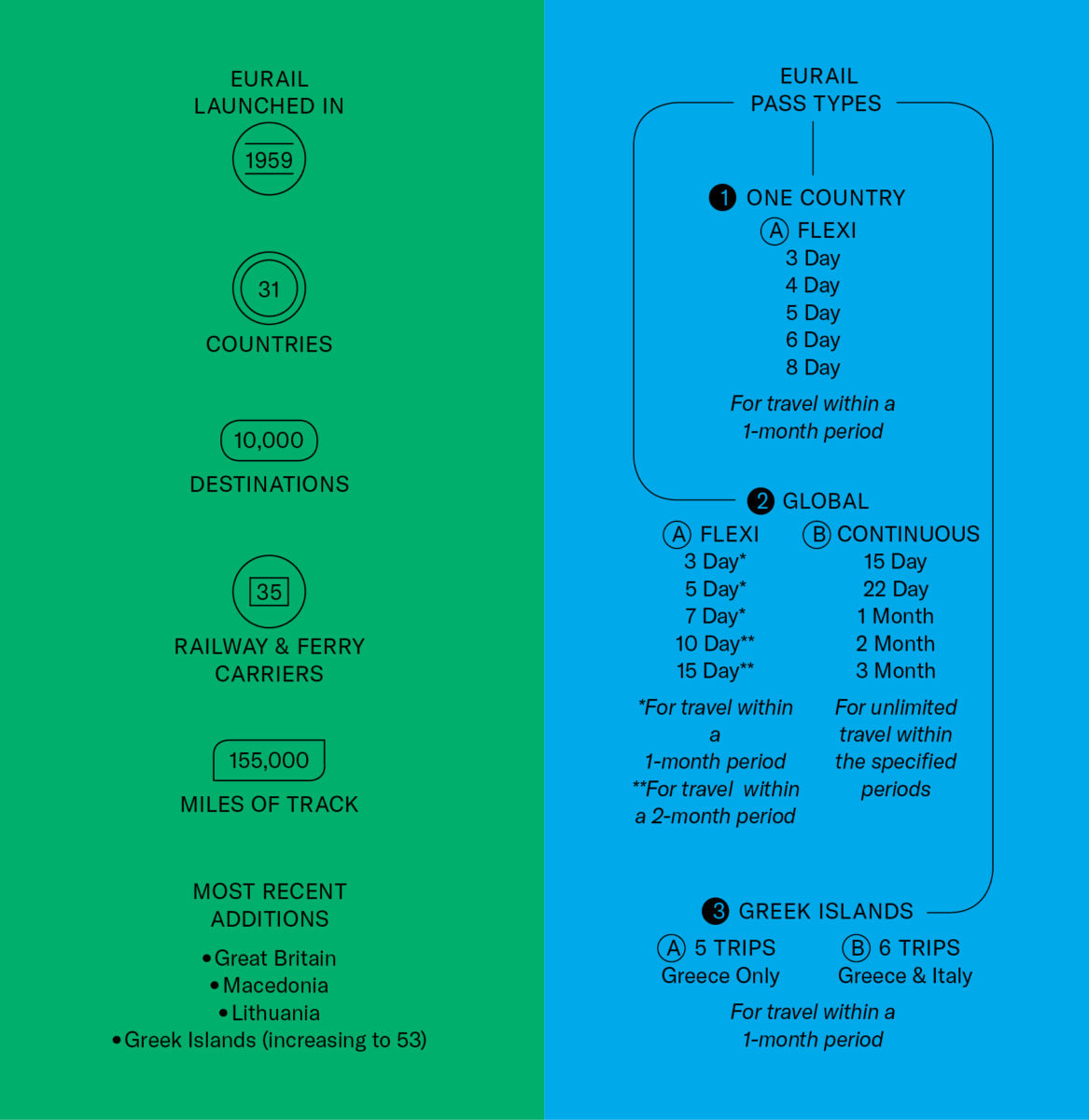 The experiences of my months-long maiden rail voyage flash through my mind each time I board a train now, nearly a decade later: listening to audiobooks on shared earbuds while the Austrian countryside rolled by, using zip ties to secure our backpacks to the luggage racks, chatting with an Italian nonna on her way to visit family.

Now, I spend four months a year working in Europe, and train travel is my (much) preferred method of transportation. While a flight from Rome to Venice takes roughly an hour, by the time you add up all the travel to and from airports (plus the need to arrive at least an hour early), the result is the same four-hour journey that you would have had by train. And you can show up at the station just 20 minutes before departure. It’s infinitely more enjoyable. And more flexible—if I’d like to linger longer over my cannoli and cappuccino, I can easily catch the next locomotive out. 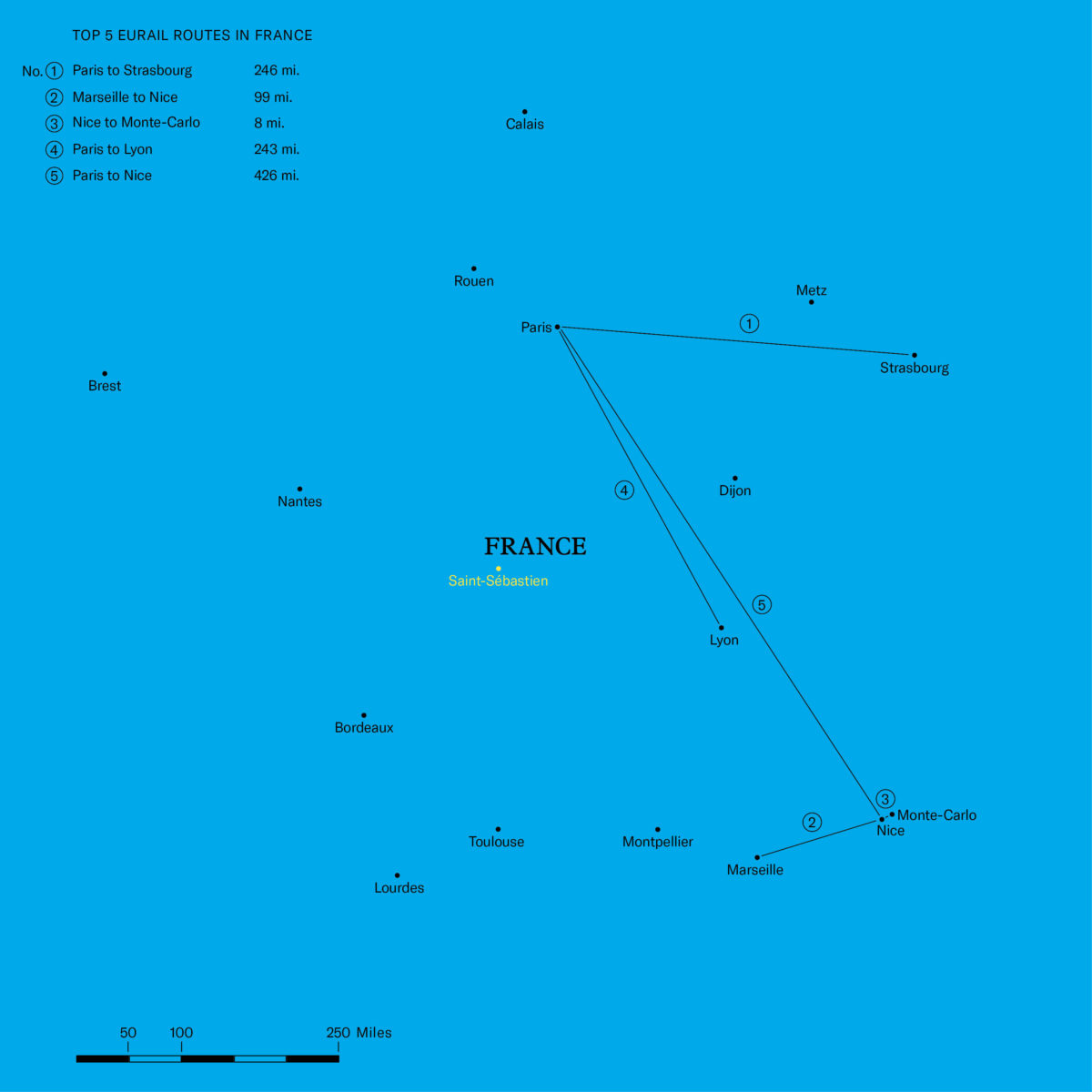 If modes of travel were film genres, planes would be dramas and trains would be romances. While you’ll find me in a window seat with my eyes glued to the scene outside on both, flights offer sweeping, climactic panoramas, and trains grant a moment-by-moment glimpse of the world. There are mountain backdrops and lush meadows that make you feel like you’ve dropped right into The Sound of Music—and there are also quieter moments. Before you can even pull out your iPhone to snap a photo, you’ll pass nondescript towns topped by medieval bell towers, someone hanging their laundry out a window, and grazing herds of sheep or cows or goats. Adding to the romance is the feeling of being part of something historical, riding lines that date back centuries. 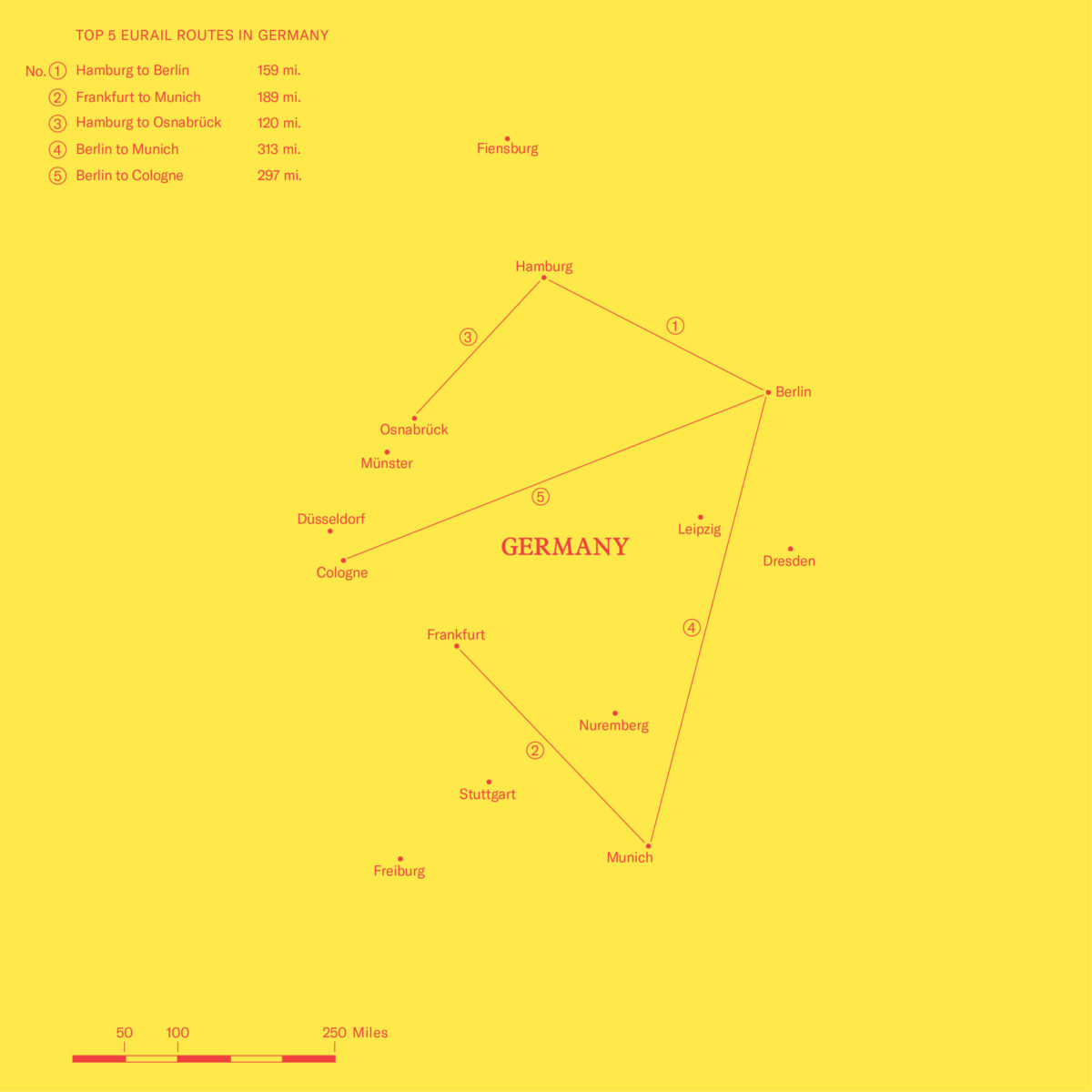 I’ve come to know each country’s rail system as a reflection of the place itself. Italy’s rickety, graffiti-covered commuter trains are rarely on time. They lack luxury. But they’re hearty and honest, if a little rough around the edges. Rocketing across the country at 300 kilometers per hour on Spain’s AVE lines is perhaps my favorite train experience. The cars are sleek and sexy, reflective of the modernizing country, but the terrain between cities is all olive and dust. The German rail system is pure efficiency—orderly, on time, clean but not flashy. I’ve waited at stations in Greece where attendants shrug and smile when I ask if there’s actually a train coming at the past-due departure time. On trains throughout the Netherlands there are entire compartments lined with bike racks. 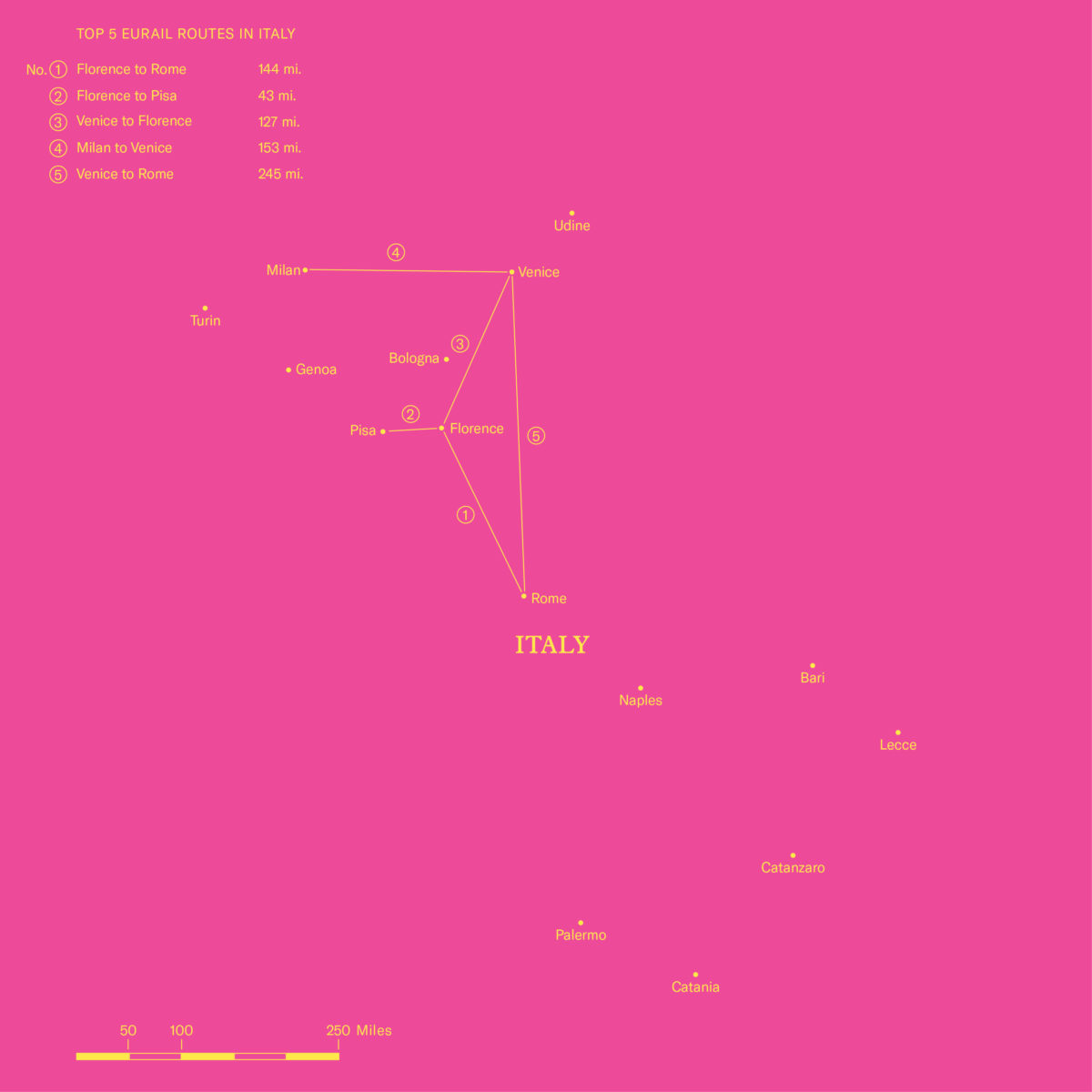 Yet for all the differences and country-specific eccentricities, rail service throughout Europe has enough of a common thread to make it a reasonably predictable experience. Departures are displayed on digital screens or (my favorite) old-school flip boards. The stations rarely have enough seating. The dining cars always have terrible, dry sandwiches. I’ve learned to travel light so I can dash down the stairs of one platform and up another set to the next on a tight connection time. I know not to trust that each seat will have an outlet to charge my computer, and to triple-check that the train is going in the direction I assume it is. But in spite of the quirks, I always feel the thrill of anticipation when I arrive at a new station, just steps from unveiling the secrets of some unexplored city.

Back in Saint-Sébastien, I was on the verge of calling my mother to admit defeat (and hopefully gain a couple hundred on my debit card) when the woman from the office came out to hand us two freshly printed tickets, explaining how she had pulled some strings and that we’d be leaving on the overnight route for free. I still think of her every time I ride a train, or whenever someone insists that French people are rude. 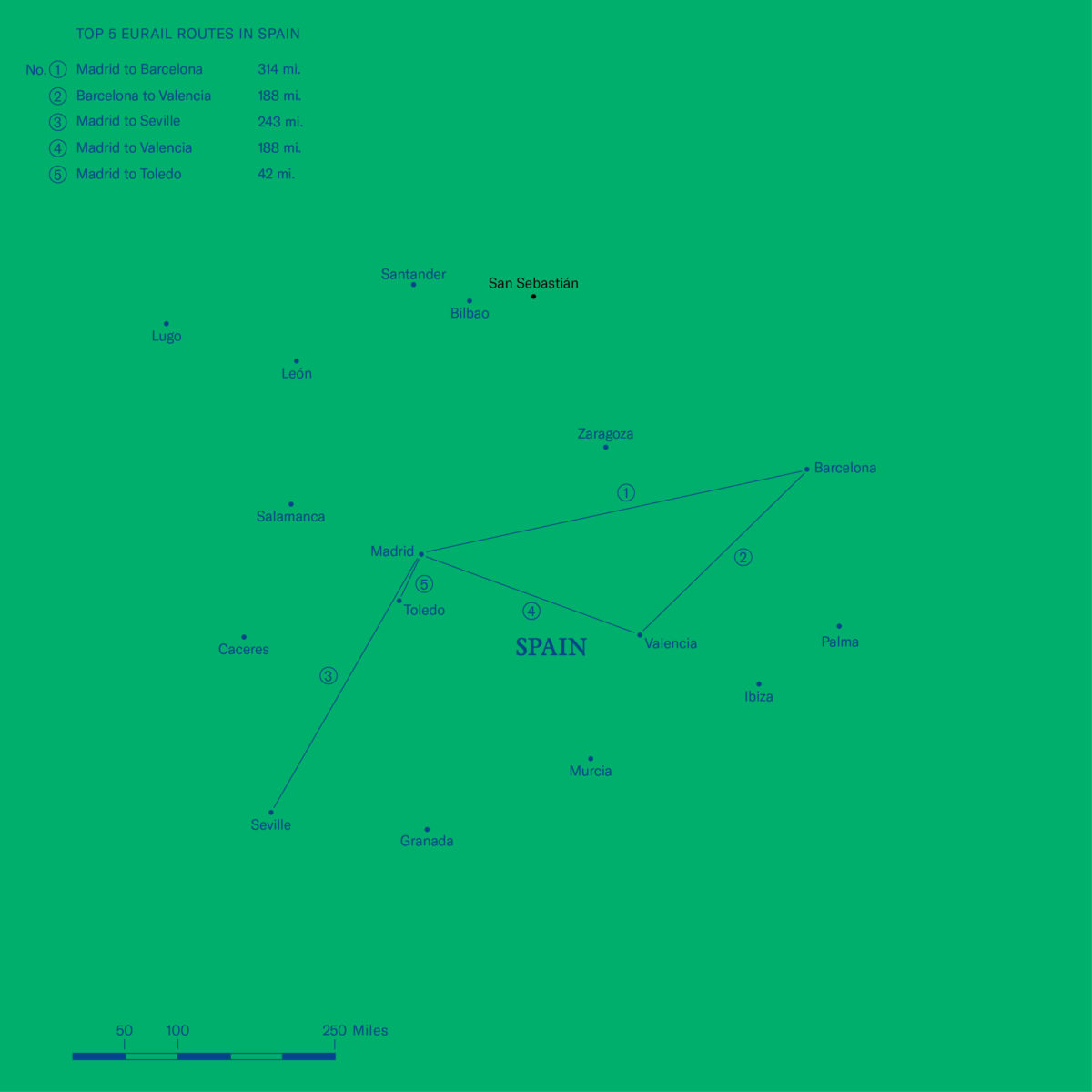 Hours later, we triumphantly bounded into our car to find our assigned seats, only to be greeted by a French couple whose tickets had the same seat numbers. I pantomimed to the train attendant, attempting to communicate our latest mix-up. He looked from ticket to ticket, then motioned for us to follow him. We walked through five, six, seven train cars before he stopped in front of a door and took out a comically enormous key ring. When he opened it, the compartment was empty and contained—wait for it—sleeper bunks. It was the most luxurious ride of the entire summer.

I stretched myself awake as the conductor announced our arrival, swinging my backpack on and buckling each strap. I stepped off the train and took a breath of the salt air, thinking about the complex set of tracks and terminals that brought me to this new adventure.