A Maya Shaman's Guide to Spiritual Healing in Belize

Rosario Panti, 57, has been practicing shamanism for five decades and comes from a long line of Maya spiritual healers.
IndexGisselle HernandezLuis Enrique Gomez

The 57-year-old shaman shares what it’s like to be a spiritual healer, plus how to appreciate Maya culture when in Belize.

Rosario Panti was only seven years old when she first began her training as a naturalist healer in her hometown of Calla Creek, Belize. As a Mopan Maya, Panti’s parents were celebrated healers that used medicinal plants to cure people. People from all over the world sought their knowledge in search of cures for chronic illnesses. Five decades later, Panti follows in her folks’ footsteps, providing spiritual and physical healing to people from all walks of life.

Panti is a part of an ancient culture, once thriving, that now only makes up only 11% of Belize’s population. “The Maya culture has been disappearing,” Panti says. “We need support from all angles to keep the culture alive.” When it comes to appreciating the Maya culture in Belize, Panti says there are many ways to do so respectfully. Panti encourages visitors to go deeper than run-of-the-mill tours, instead opting for transformative experiences that also help the community. Below, she shares five ways visitors can appreciate Maya culture when in Belize.

Photographer Adraint Bereal on His First International Trip to Belize → 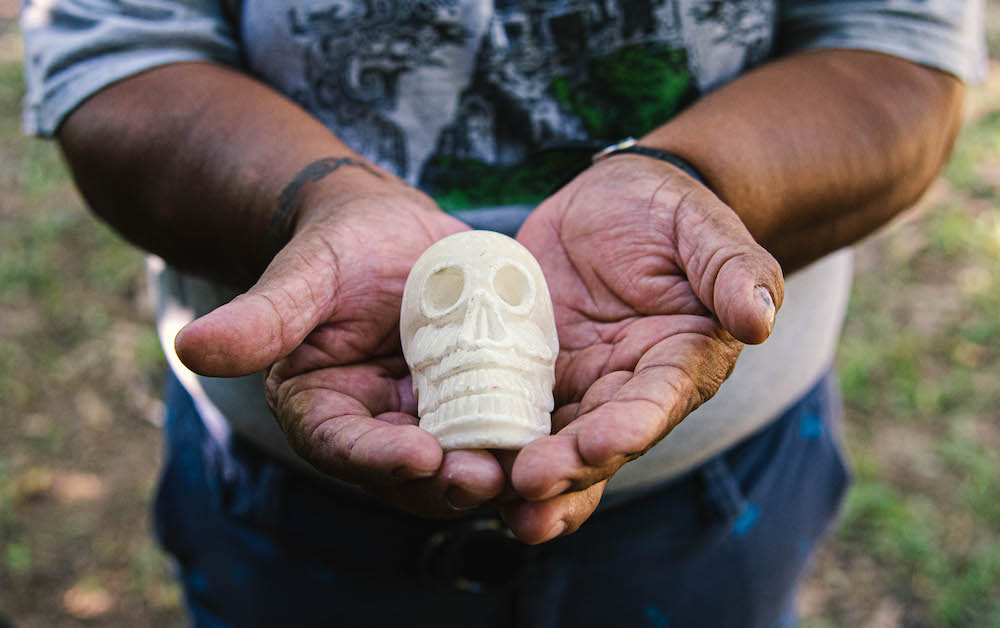 Before heading on a walk in the woods in search of medicinal plants, Panti cleanses visitors' energies in a ceremony using a crystal skull. 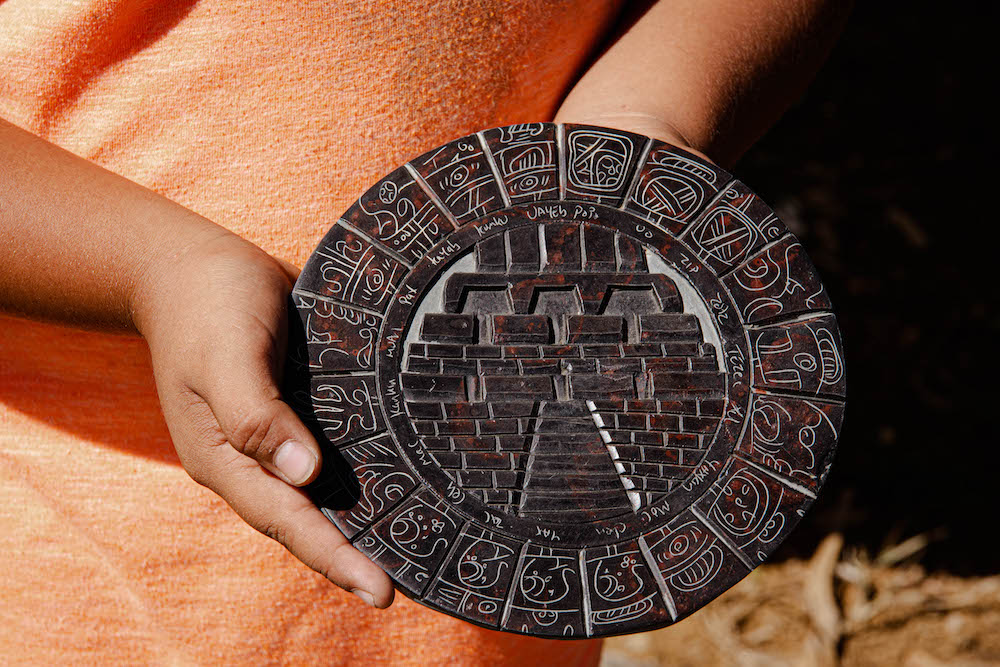 Like spiritual healing, the ancient art of stone carving was passed down to Panti by generations of healer-artisans before her.

Partake in a Cleansing Ritual

On the outskirts of her village in the Cayo District, Panti owns a large swath of rainforest where she carries out various services in line with her healing, one of which is a cleansing ritual she performs on guests wanting to walk her guided medicinal trail. “This is to make sure the forest welcomes you and sees you as a friend,” she says. “To rid any negative energy.”

At the edge of the forest, Panti sits us down on a wooden bench. Reaching into her bag, she pulls out a miniature crystal skull and cradles it between her palms. She leans forward and lays the bone-white relic gently on mine. Stepping back, Panti begins a series of energy-healing movements while facing me, her hands slowly reaching for the sky before coming back together toward her chest. She repeats them on either side of me before plucking the glinting skull from my hands. Panti then welcomes us in her native Maya tongue before switching back to Spanish. The shaman then begins to read my aura, telling me aspects of my life and my troubles with eerie accuracy. The ritual is necessary before entering the forest, which is a very sacred place.

After the short ceremony, stepping into the forest feels much lighter and welcoming, like a heavy burden has been lifted. The aftereffects of such a solemn yet silent formality are not unlike that of deep meditation. 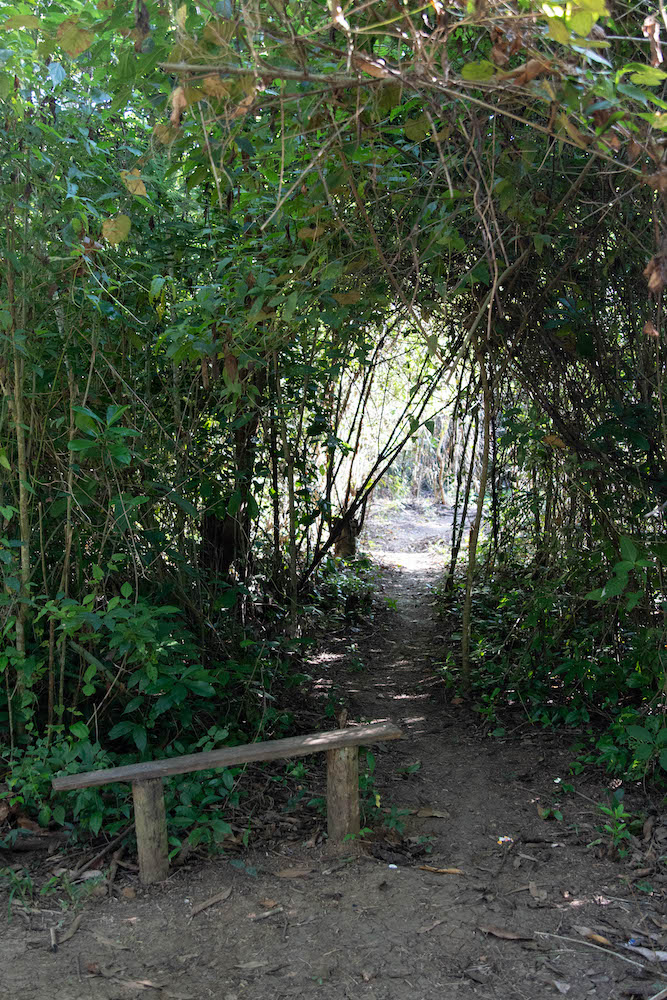 A peek into the sacred forest where Panti gathers medicinal herbs for her practice. 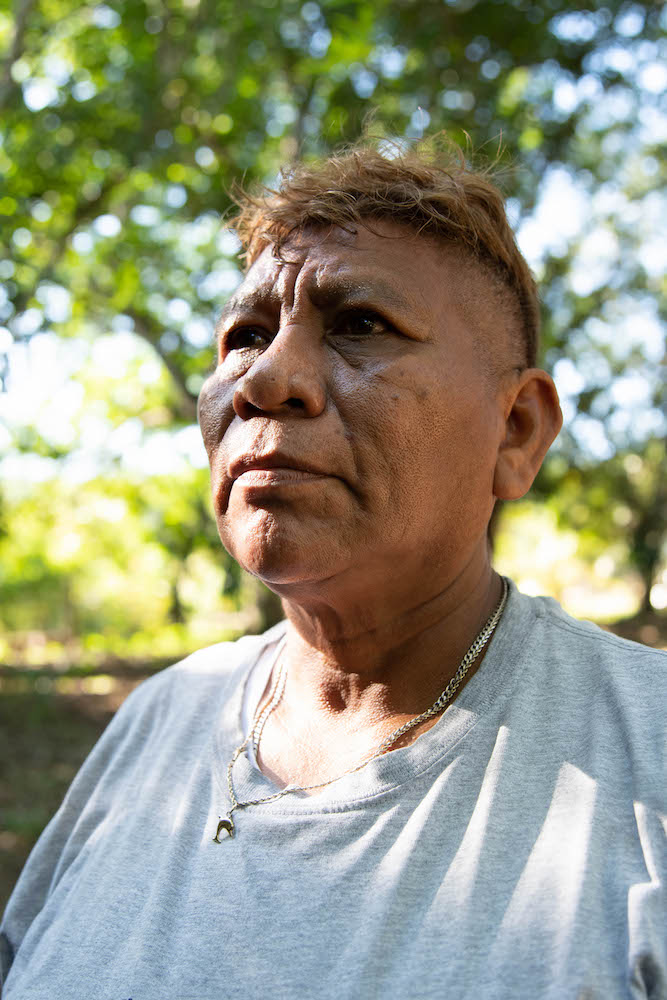 “The forest has a cure for everything,” Panti says. “You just have to find it.”

As a shaman, Panti is first and foremost a healer, but not the stethoscope-wielding one most are familiar with. Instead, she draws her medicine from the nature around her. “The forest has a cure for everything,” Panti says. “You just have to find it.” Belize’s jungles are often known for being the ideal playground for adventure, but a lesser-known attraction is the plethora of medicinal trails peppered throughout. “I’ve cured many illnesses in my time as a shaman,” Panti says as she walks through the particularly dense trail, her hands plucking leaves from a multitude of plants and handing them to us as she goes.

On the trail, Panti shares the different uses of unassuming plants, such as curing headaches, infections, and even antidotes for poison. Her ancestors were highly sought after for this exact reason. Today, the use of medicinal herbs is diminishing. Nonetheless, Panti hopes those seeking holistic wellness will find it in the jungles of Belize.

The Maya place a major emphasis on foraged plants for cuisine as well as healing. Though a significant portion of Maya customs have dwindled in the last few decades, their cuisine can still be readily enjoyed today. Dishes using plants like chaya and vegetables like maize (corn) are staples. Even their traditional cooking methods have withstood the test of time. For instance, the making of corn tortillas by hand is an experience you can attempt yourself with the San Antonio Women’s Group in the Cayo District. It’s an activity that is as delicious as it is historic.

Worth Traveling For: Itanoní Antojeria y Tortilleria in Oaxaca, Mexico → 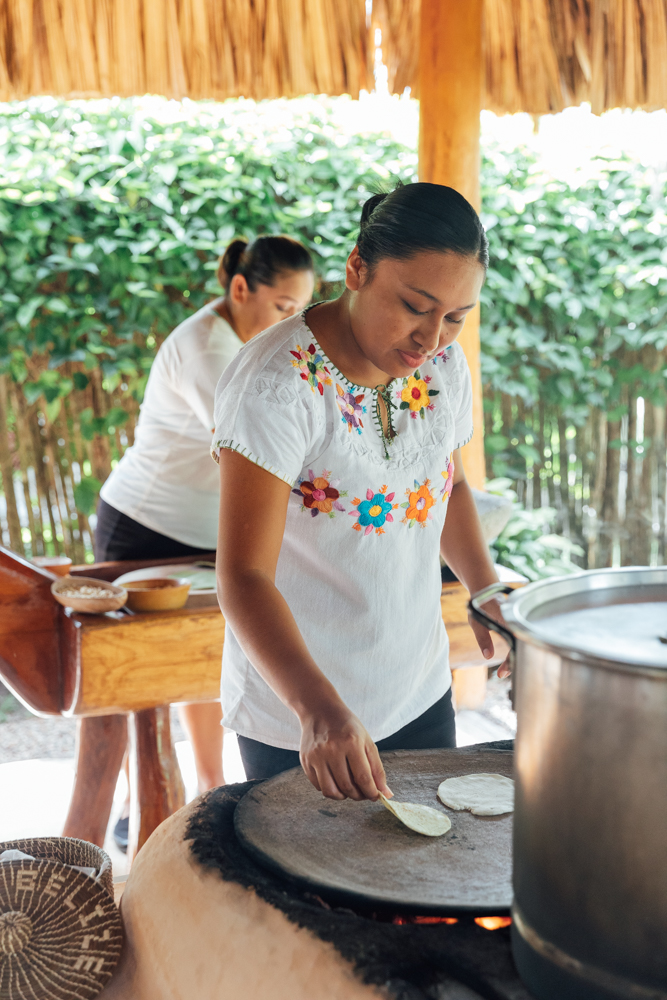 Tortilla making classes are a great way to learn about traditional Maya food and cooking. Photo courtesy of the Belize Tourism Board. 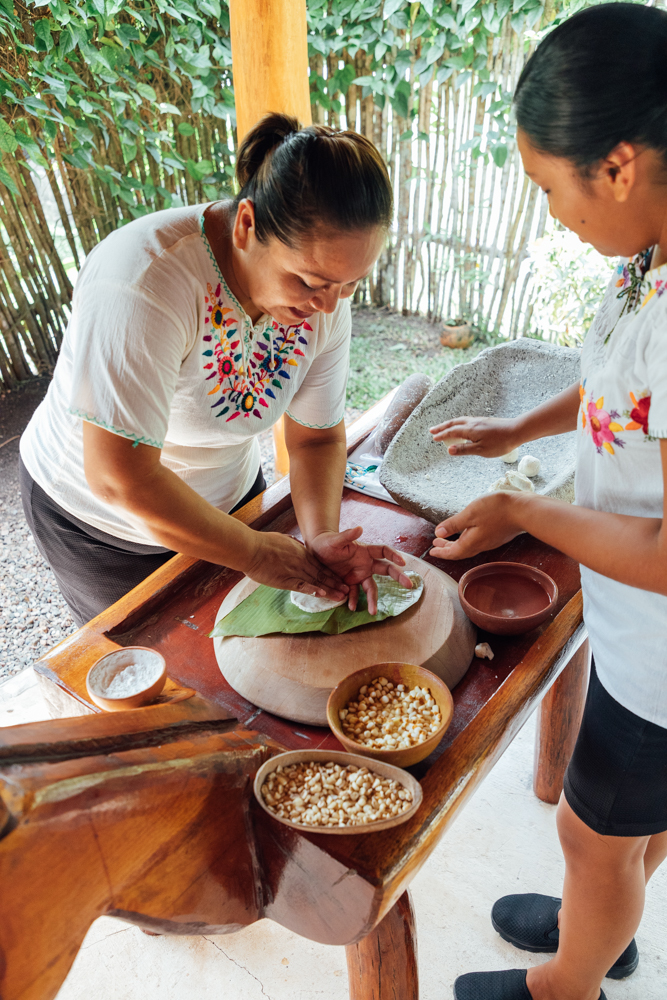 Prepare tortillas from scratch with with the San Antonio Women's Group, using ancient methods that have withstood the test of time. Photo courtesy of the Belize Tourism Board.

Appreciate the Art of Stone Carving

Before she learned to heal, Panti studied the delicate art of stone carving. The skill has been passed down from generation to generation, with Panti’s grandkids now picking up the tradition. Requiring precision and patience, the artisan uses a hand-drawn stencil (usually a Maya God or the Maya Calendar) to begin carving out the image. Using only sandpaper, a machete, and a hacksaw blade, these artists create stunning works of art from rocks collected from the mountains and cliffs in Belize. Panti was one of the first artisans that began selling stone carvings at the souvenir booths near Xunantunich. These stone carvings make great souvenirs to bring home, while also supporting the community. 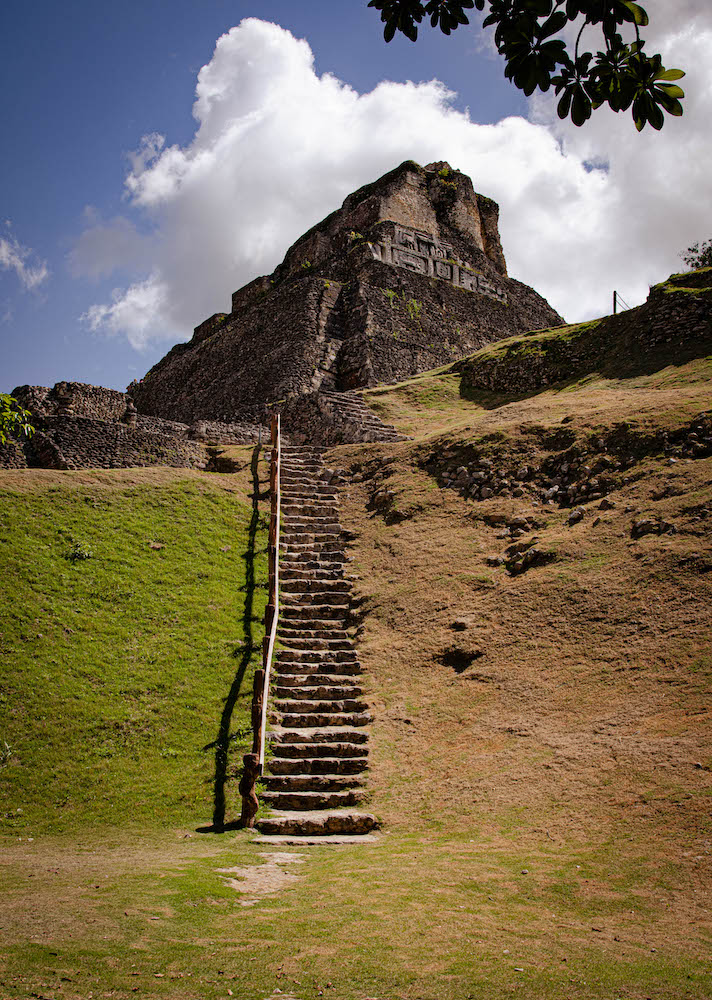 Xunantunich is arguably the most famous ancient Maya site in Belize. Don't miss out on visiting this historic landmark and climbing to the top for a breathtaking view of the grounds, plus purchasing some stone carvings as souvenirs on your way home.

Millions of Maya once called Belize home, and the evidence is scattered throughout the pint-sized country. Belize holds more than 100 Maya sites, but only a fraction have been excavated. When visiting for the first time, Panti suggests heading to Xunantunich, located right in her hometown of San Jose Succotz. The thousand-year-old Maya site (pronounced shoe-nan-too-nitch) holds one of Belize’s most stunning temples. Unlike other Central American destinations, Belize’s temples are virtually uncrowded 90 percent of the time. You can climb to the top of the El Castillo temple and soak in the view of the surrounding jungle. You might even spot a family of spider monkeys swinging from tree to tree. Climbing back down the 130-foot tall ruin, make sure to admire the vast green lawns below and the intricate stone carvings on the face of the temple.

Connecting to Past (and Present) in the Ancient Sacred Valley →

The Maya is just one of many cultures that call Belize home. With Mexico to the north, Guatemala to the east and south, and the Caribbean to the west, dozens of Mesoamerican cultures contribute to the multicolored tapestry of the Belizean people. For Panti, each of them makes Belize beautiful, but she’s concerned over the dilution of Maya culture and heritage she has witnessed over the past few decades. “If we have that spirit to rise, get up, sit and talk about it,” Panti says, “we can guarantee the success of the culture.”