How to Spend a Long Weekend in Belfast, Northern Ireland

The city of Belfast in Northern Ireland.

The best places to stay, eat, drink, and have fun in Belfast.

Weaving throughout the quaint cobblestone streets of Belfast’s fashionable Cathedral Quarter neighborhood, it becomes clear why the city has been making waves as an up-and-coming vacation destination as of late. The port city has earned its buzz due to its vibrant music scene, inventive culinary offerings, and culturally diverse neighborhoods—particularly the newly developed waterfront area, Titanic Quarter, which is teeming with bars, bites, and lively riverside entertainment.

With no shortage of things to do, from art museums to award-winning restaurants, Belfast (the city that built the Titanic) should be on the top of your list this year. 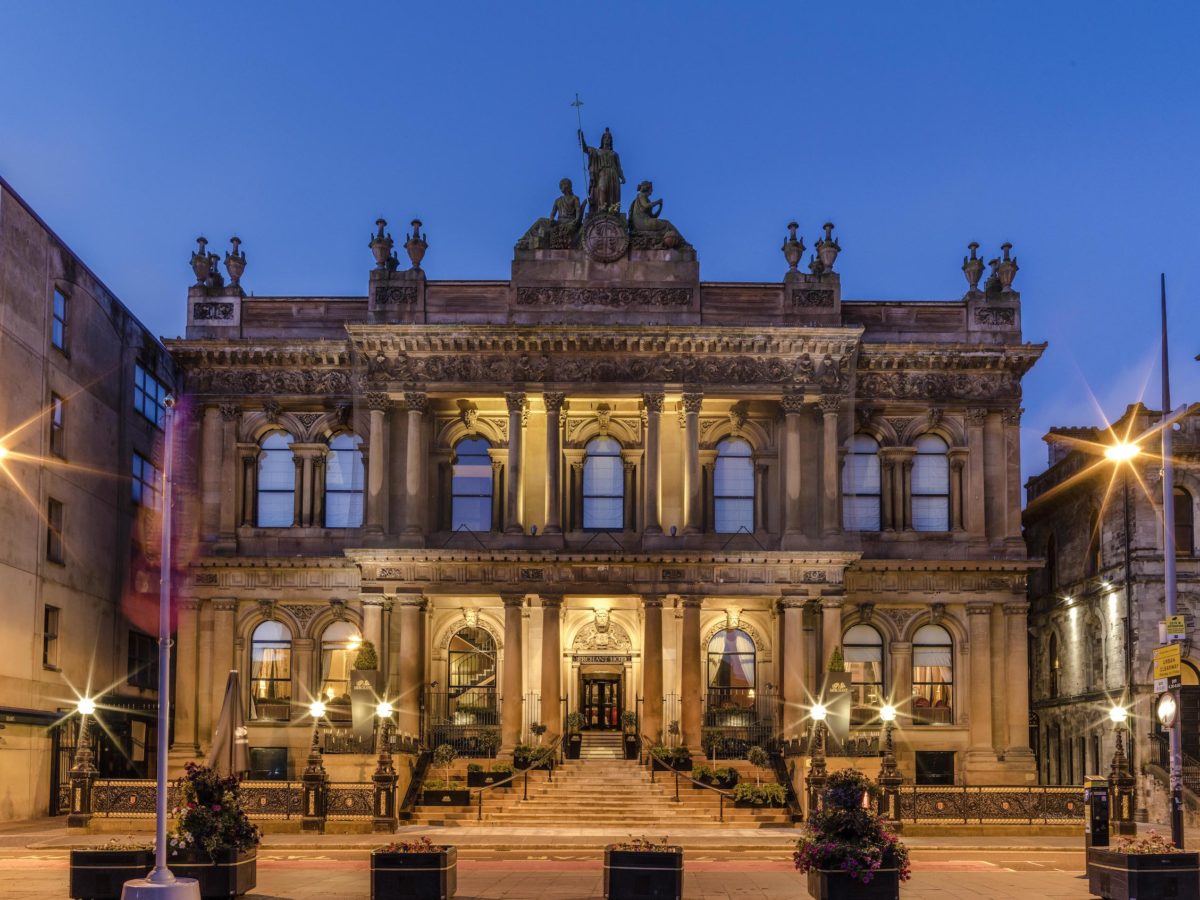 The Merchant Hotel has welcomed a host of A-list celebrities to Belfast. 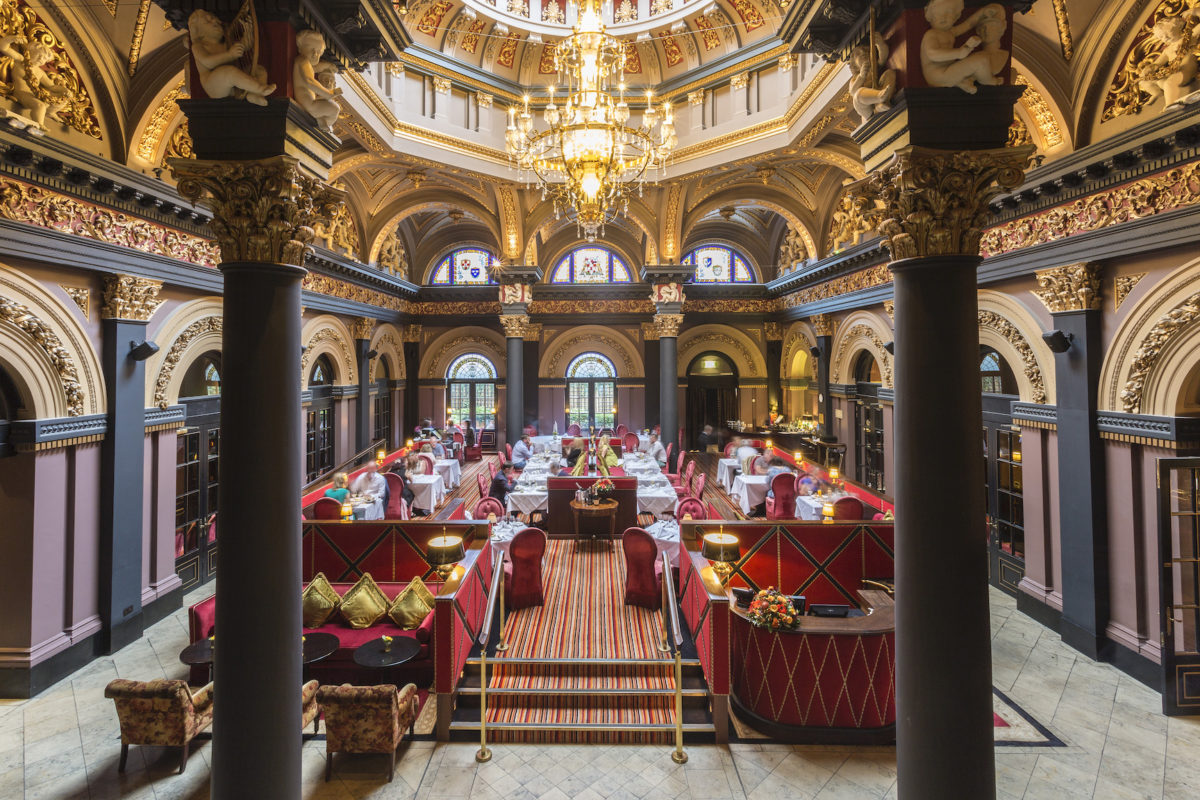 The Art Deco and Victorian rooms at the Merchant Hotel dazzles guests from around the world.

Where to Stay in Belfast

This contemporary 62-room hotel is near the Titanic Quarter and a quick walk from most of the city’s most sought-after sights. Before heading out for the night, make sure to get an aperitivo at their hotel bar, MalBar, an elaborately adorned watering hole serving tasty cocktails to a local and trendy crowd.

Located in the heart of Cathedral Quarter, this five-star hotel has been the home away from home for A-list celebs like Kylie Minogue, Meryl Streep, The Killers, and Shirley MacLaine. The Merchant is known for its lavish Art Deco and Victorian rooms, as well as their famed lobby bar, complete with roaring fireplaces and plush interior—making it the perfect afternoon spot for high tea. 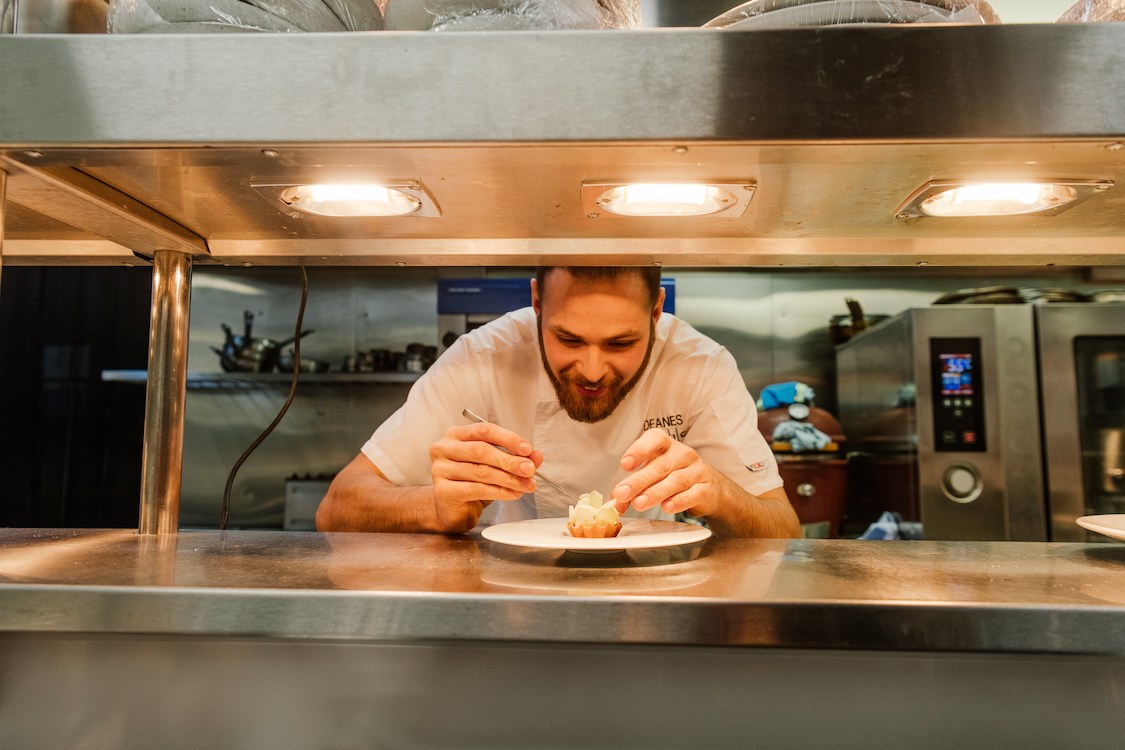 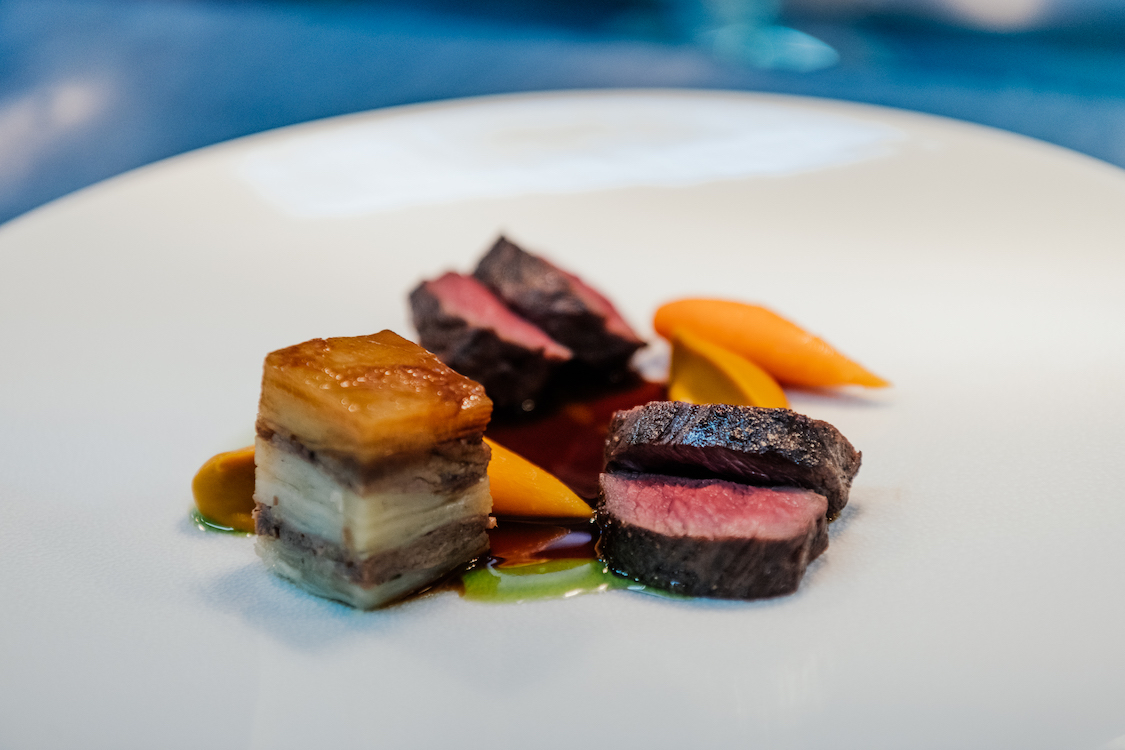 Everything on the menu at EIPIC is locally sourced and seasonal.

Where to Eat in Belfast

For dedicated foodies, this Michelin-starred restaurant cannot be missed. Chef Alex Greene has spent his career in and out of Michelin kitchens and has returned to EIPIC in a starring role. Greene cooks up delicious modern European cuisine using seasonal produce from local farms. Entrees include duck egg yolk with mushroom, bacon, and endive, and a winter vegetable tartlet with bacon jam and brown butter. For dessert, he might serve up a lemon tart with poached pear and tonka bean or grapefruit posset with rosemary and blueberry garnishing. 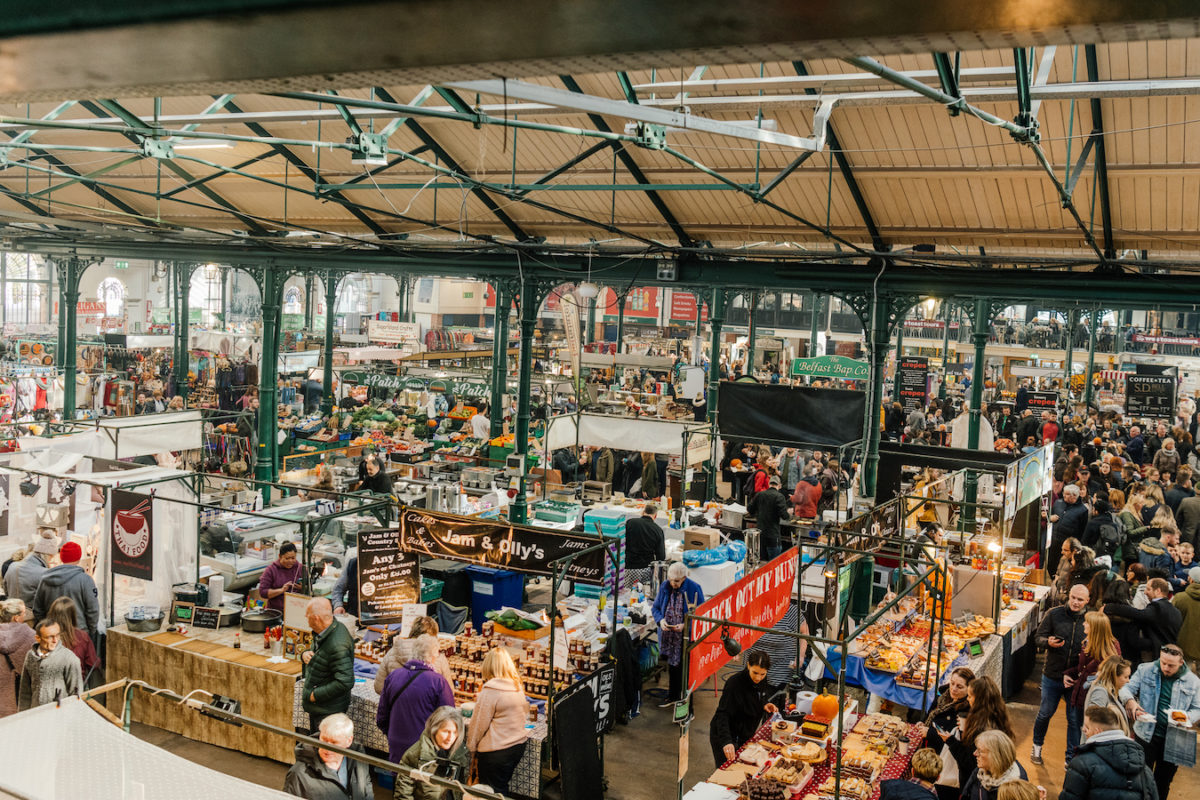 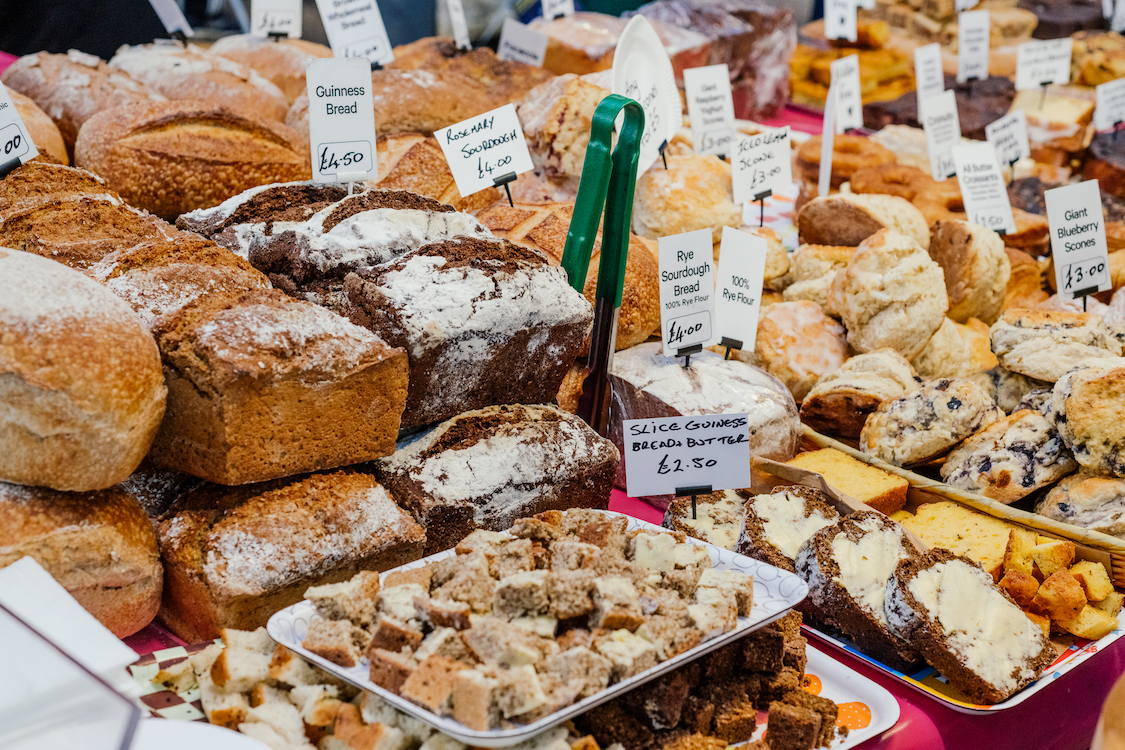 Find everything from fresh baked bread to vegan burgers and Indian curry.

Founded in 1609, St. George’s Market is the last standing traditional roofed Victorian market in Belfast. Friday through Sunday, market-goers can peruse over 250 vendors selling local goods like homemade soaps and vintage jewelry, as well as food stalls serving everything from vegan burgers to Indian curry. Don’t leave the market without trying Guinness bread, an Irish staple sold at every bakery stall. 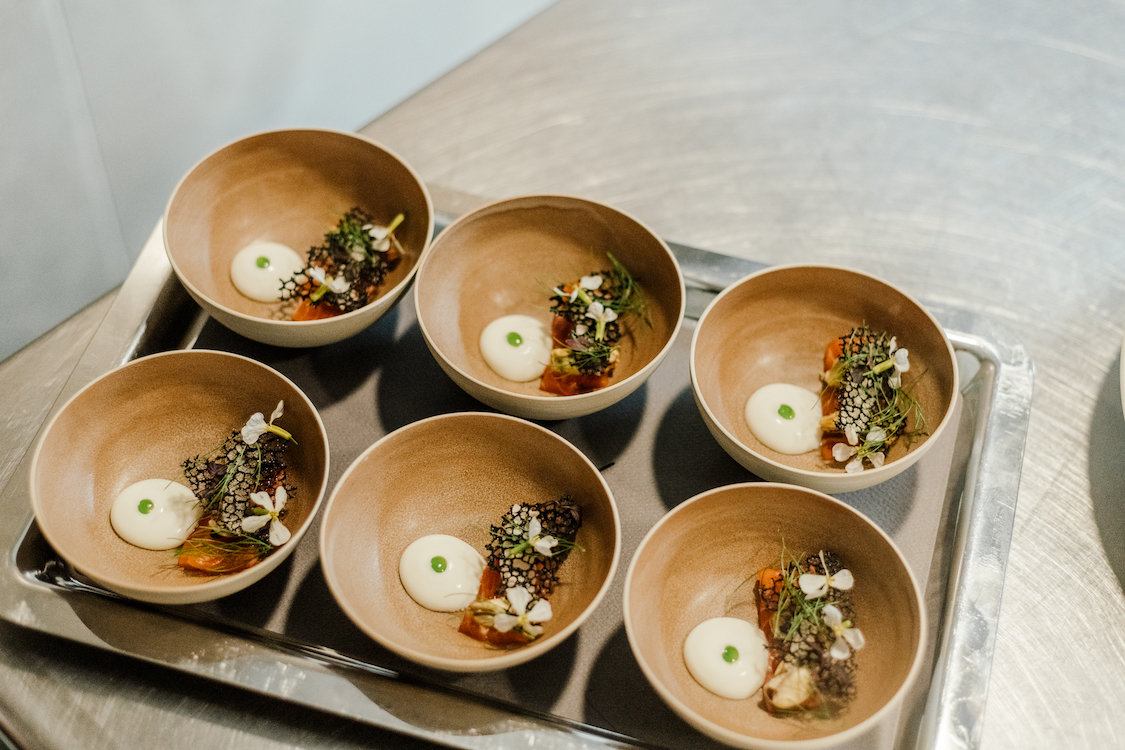 The head chefs at OX met in Paris and decided to bring culinary excellence to their hometown in Belfast. 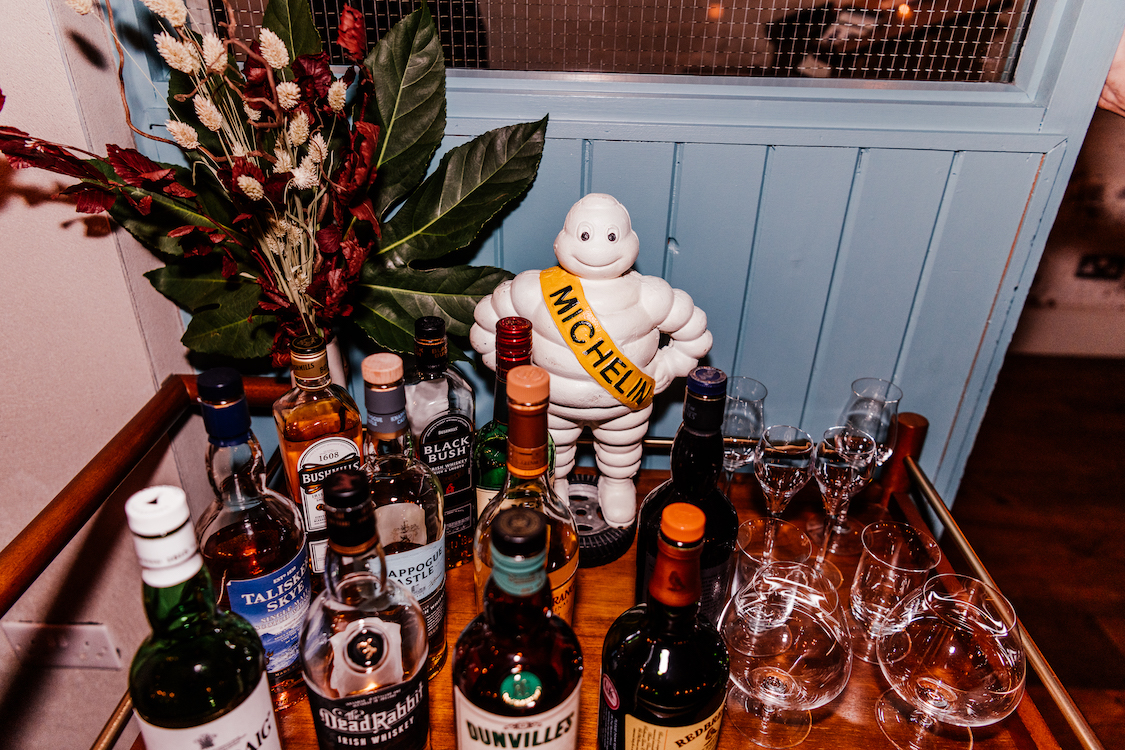 After digging into a Michelin-starred meal, check out OX's wine bar next door. 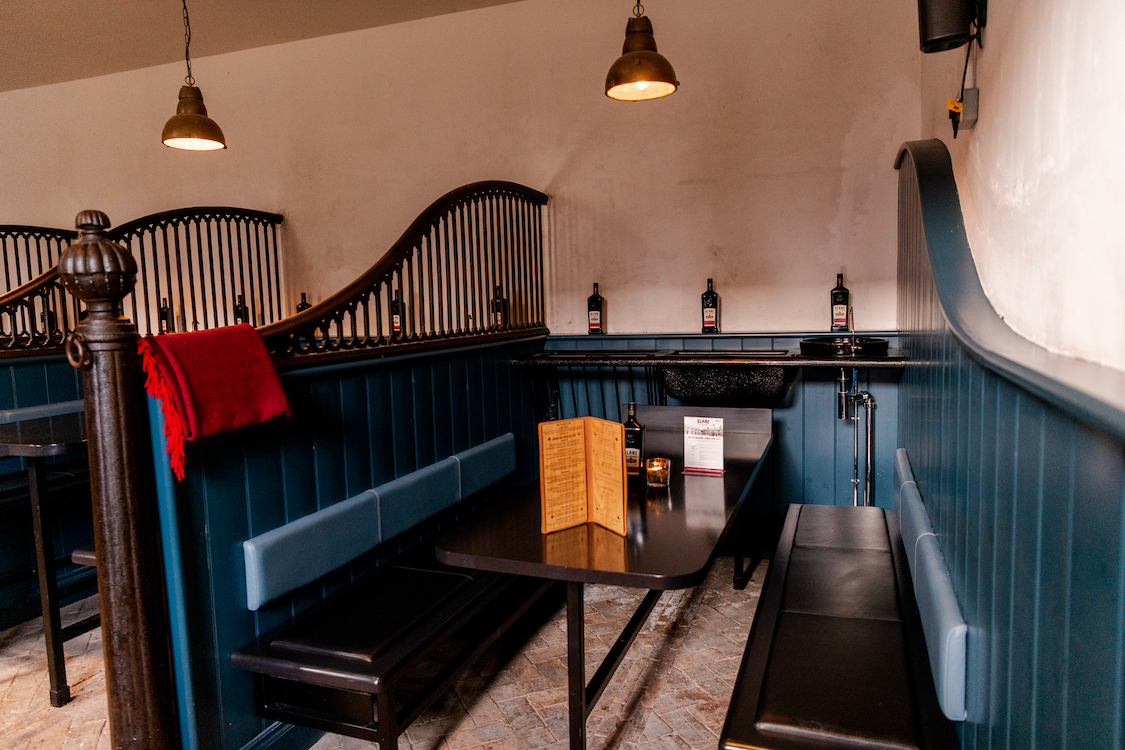 OX seats only 40 people at once, so consider making reservations in advance.

When Belfast-born chefs Stephen and Brittany met working in various Michelin-starred restaurants in Paris, they were determined to bring their culinary expertise back to their hometown. Their years of training has taken the form of OX, a 40-seat, bare-brick, whitewashed restaurant perfect for a cozy weeknight dinner. Arrive hungry, because you will want to have at least two servings of their homemade sourdough bread with cuinneog (churned) butter, which is to die for. After dinner, check out their quaint wine bar located right next door for a nightcap.

This lunchtime eatery is a must-visit during your stay. The name derives from the restaurant’s curatorial concept: Every three weeks, the chef selects a new menu using one of the cookbooks that line the seating area. If you’re not in the mood for a full meal, make sure to try the homemade banana bread, their bestseller. 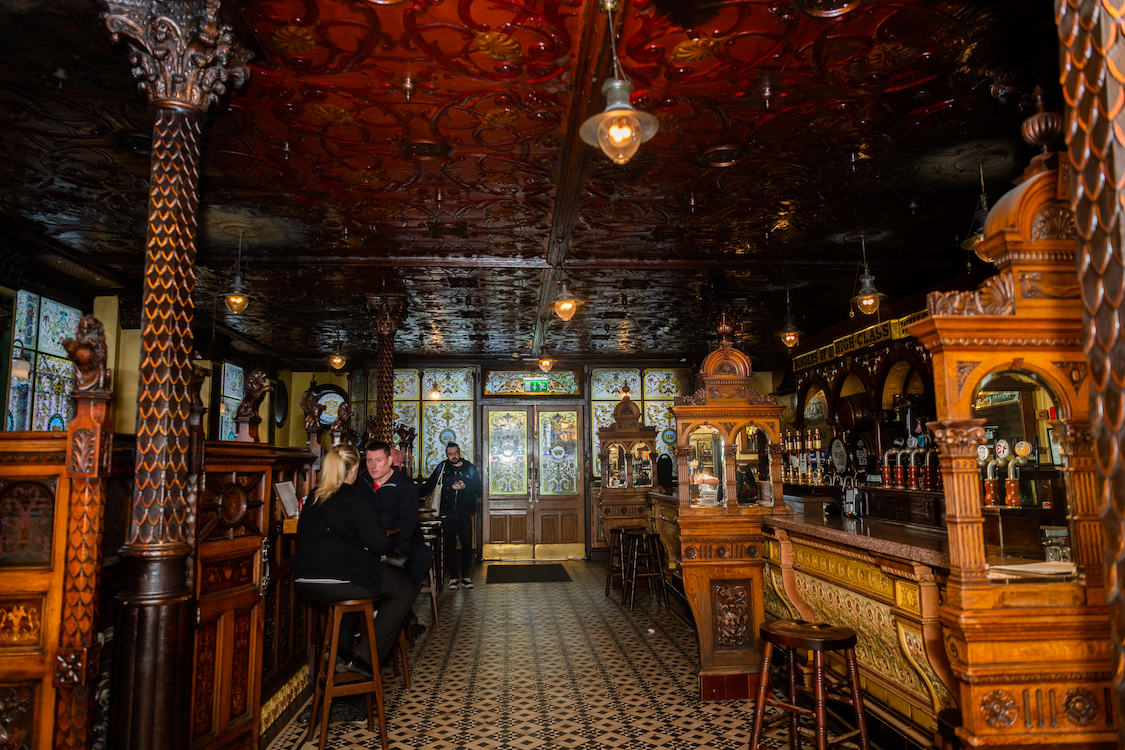 Many consider the Crown Liquor Saloon as the best-preserved Victorian gin palace in the world. 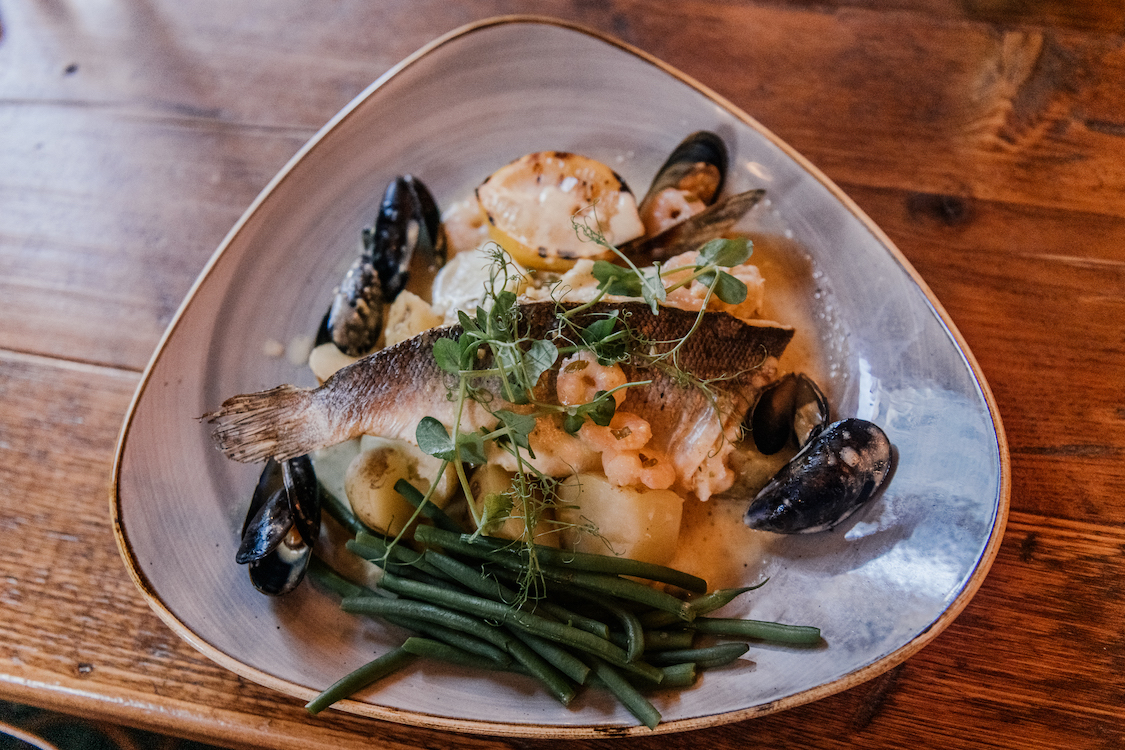 Learn about the Crown's rich history, try their drinks, and don't miss out on their food, including everything from Crown Irish stew to steak and Guinness pie.

Where to Drink in Belfast

A visit to Crown Liquor Saloon is like stepping back in time to the 1800s. The saloon is recognized as the best-preserved Victorian gin palace in the world, complete with intimate wooden seating nooks and a traditional whiskey bar still intact. The owner even uses the building’s original gas lighting system and spends over twenty minutes each morning lighting each gas lamp with a match. Old habits die hard here.

Rain or shine, you will hear the sound of traditional Irish music resounding from the courtyard of The Dirty Onion on any given night. The bar occupies Belfast’s oldest building, which dates back to 1780, with interior charm to boot. Its low ceilings, old Jameson barrels, and wooden rafters make the perfect setting for listening to traditional folk music while enjoying a pint. 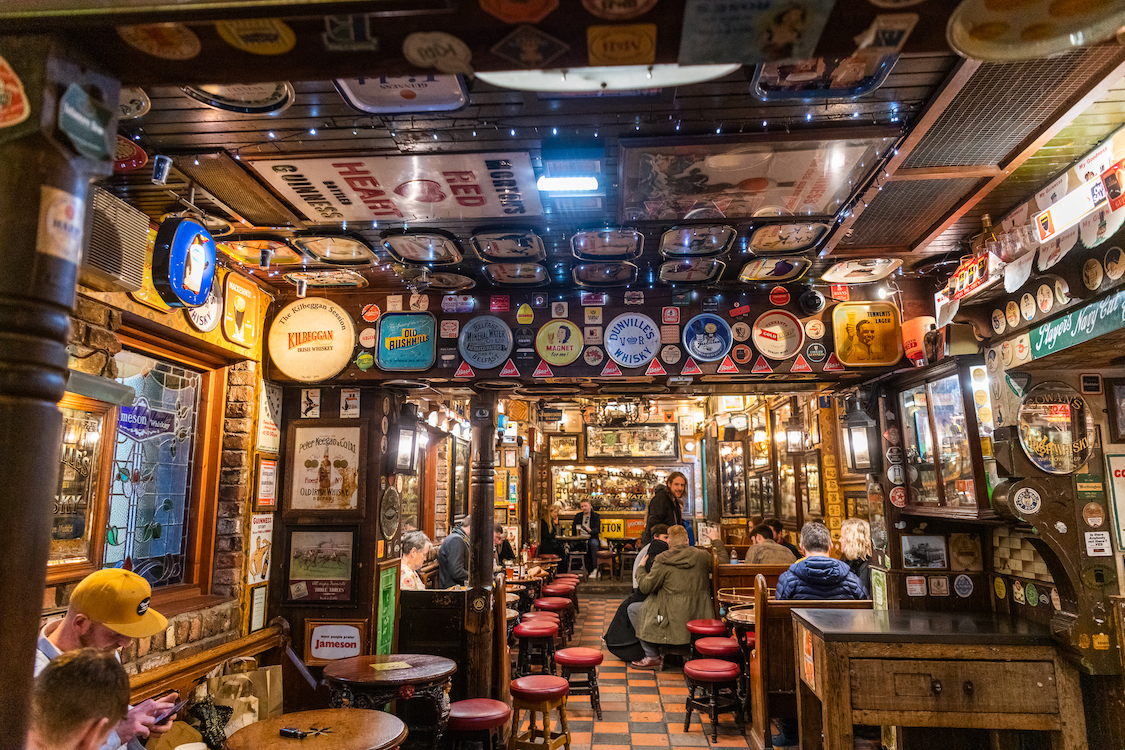 The owner of the Duke of York spent years collecting Irish paraphernalia to deck out the pub's walls and ceilings.

This pub to end all pubs is just a stone’s throw from the Dirty Onion. Willie, the owner, has spent years decorating the bar with traditional memorabilia he has collected from his travels across the counties of Ulster. The result? Eccentric walls covered with knick-knacks such as vintage alcohol signs and mirrored whiskey ads. Make sure to make a night of it and stop by after five to catch the live music. 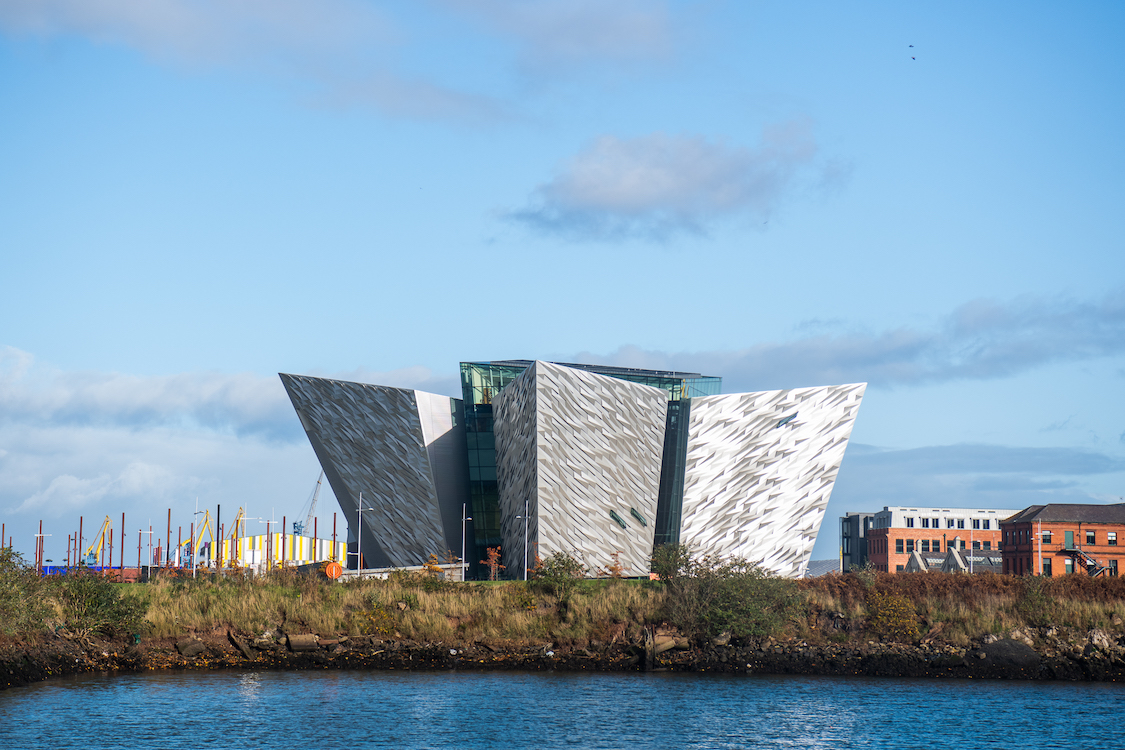 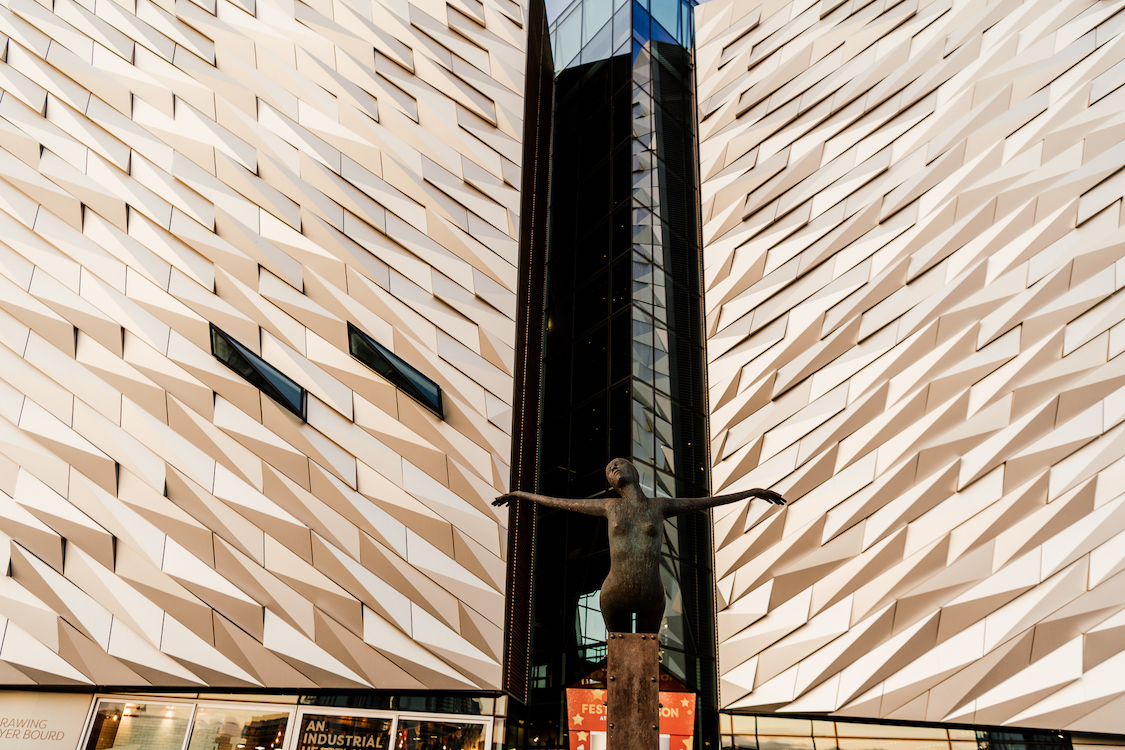 The museum features interactive exhibits and a rollercoaster that takes riders through life in a 20th-century ship making factory.

What to Do in Belfast

This digitally interactive museum takes you back to the heyday of Belfast’s shipyard industry and walks visitors through the process of how Olympic ocean liners were designed—specifically, the Titanic. The permanent exhibition is a stimulating crash course on the ins and outs of the most infamous ship in the world, from its intricate construction to the surprising details on what made it sink. Make sure to leave time for the amusement park ride, where you’ll be shown what it’s like to work in a 20th-century ship making factory.

For a cultural experience that will quite literally keep you on the edge of your seat, make sure to book a ride with the Black Cabby Tour. An authentic London-style black cab will scoop you up and whiz you around the city to spots you didn’t know you needed to see, while the driver explains Belfast’s rich and contentious history. From the walls that divide the city (and why), to political murals and iconic historical landmarks, you’ll get the lay of the land in no time. 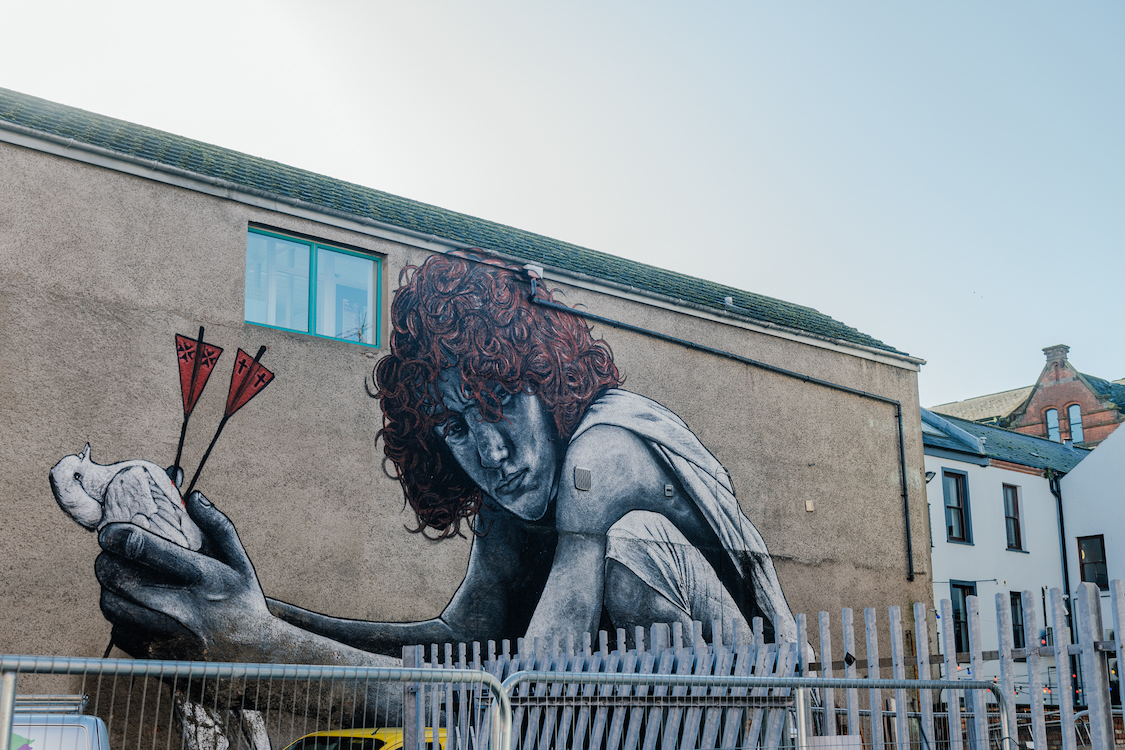 Belfast is internationally known for the incredible street art that decorates the city's walls. 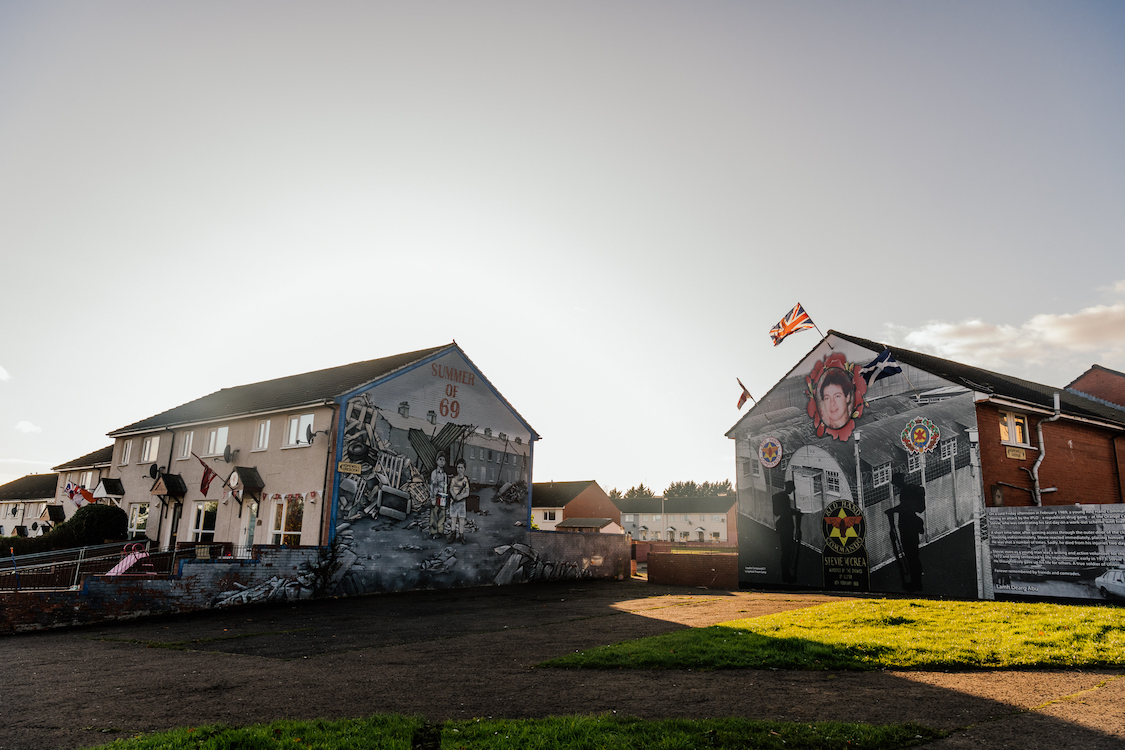 Take a walking tour with Seedhead Arts to learn about Belfast's history through its graffiti. 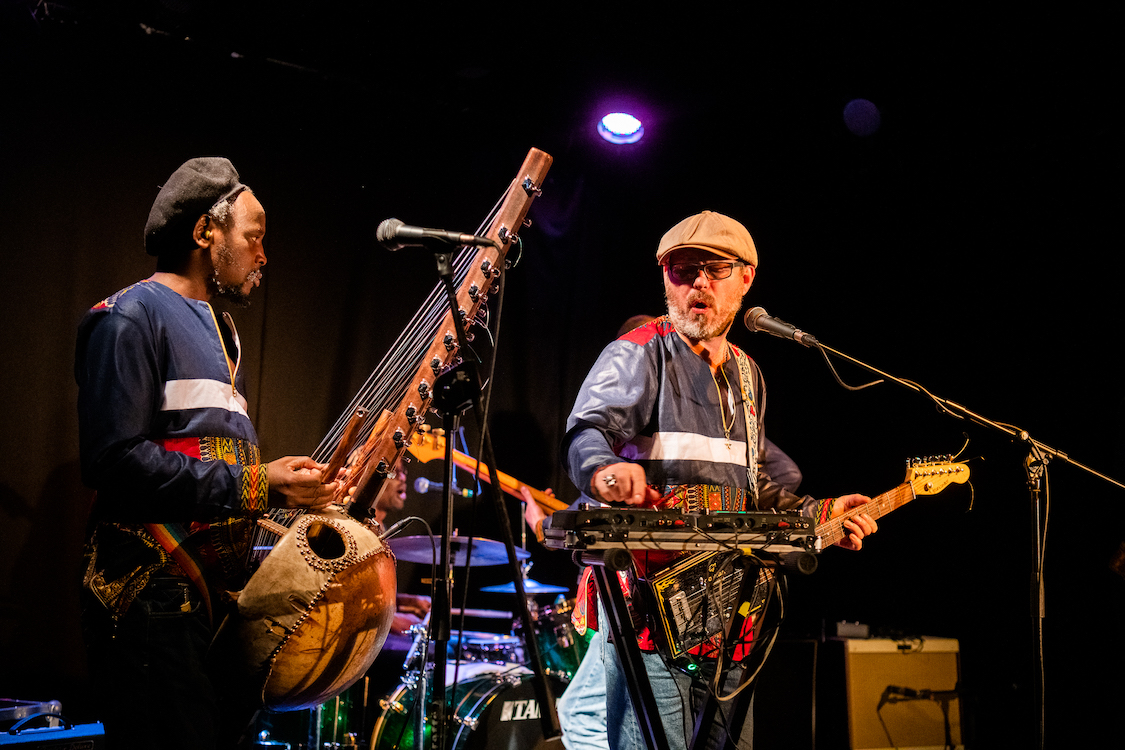 Catch a show at the Black Box, Belfast's most eclectic and exciting arts hub. 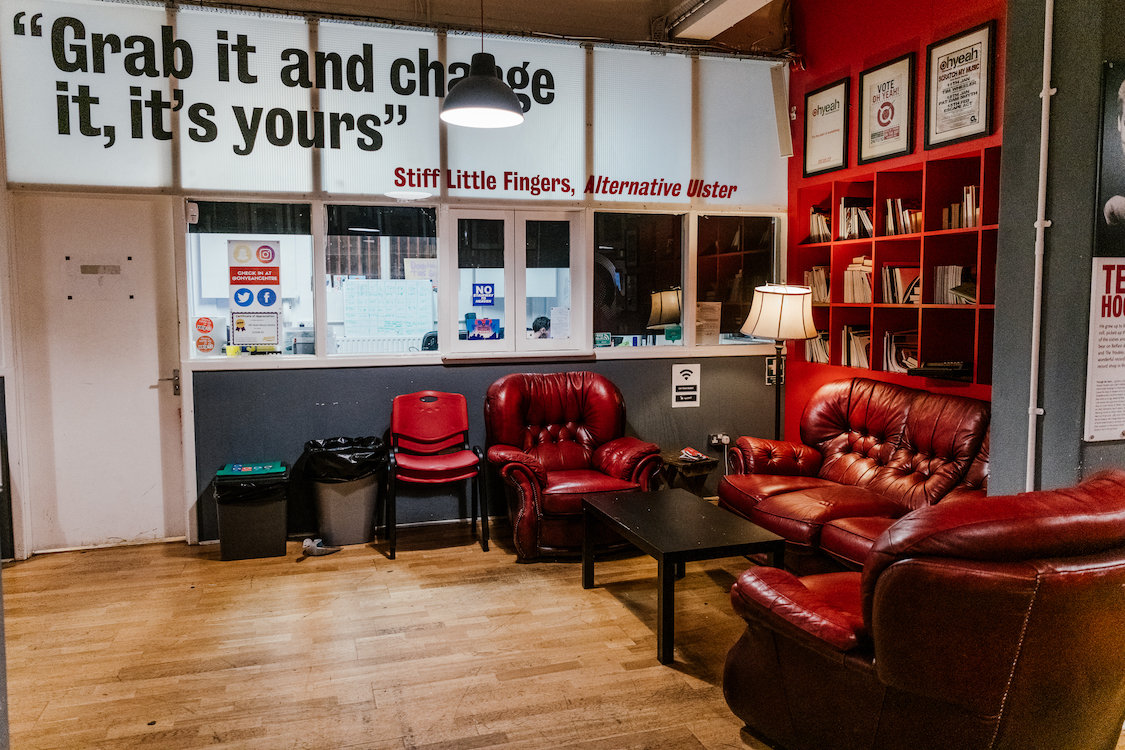 The Oh Yeah Music Center houses the minds behind Sound of Belfast, an annual festival celebrating the city's musical heritage.

Each May, Seedhead Arts organizes Belfast’s street art festival. Sign up for their specialized street art walking tour to learn the modern history of Belfast through the lens of the colorful and culturally relevant commissioned murals that cover the city’s walls, or take a class with them to learn how to take on the role of artist yourself.

Located in the heart of Cathedral Quarter, The Black Box is Belfast’s most experimental performing arts venue. On any given night, you could be privy to a cabaret performance, comedy show, circus act, or live band, like an African group covering Beatles hits. While you can buy tickets at the door, it is advised that you book tickets in advance.

Part venue, part exhibition space, and part recording studio, Oh Yeah Music Centre is Belfast’s lauded non-profit music hub. Make sure to take their guided music tour and learn the backstories of some of Belfast’s famous musicians such as Van Morrison and Snow Patrol. If you can, try to time your visit to coincide with the Sound of Belfast, the center’s week-long celebration that pays tribute to Northern Ireland’s vibrant music scene. 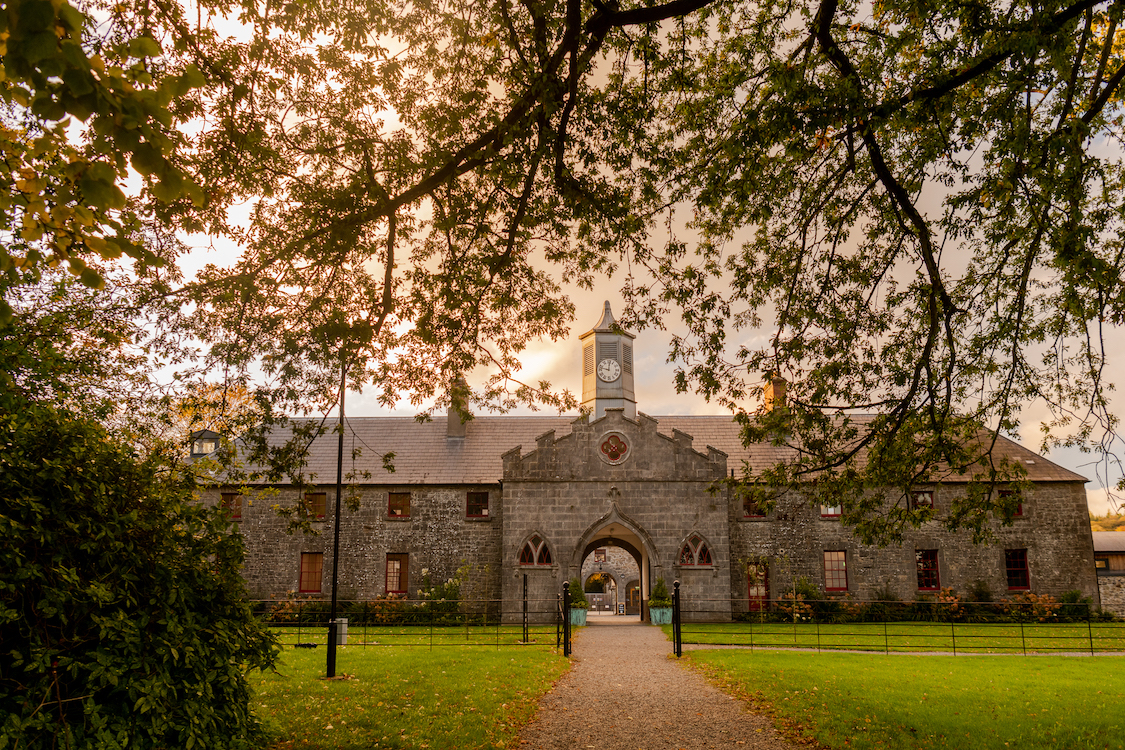 Slane Castle sits just over an hour outside of Belfast. 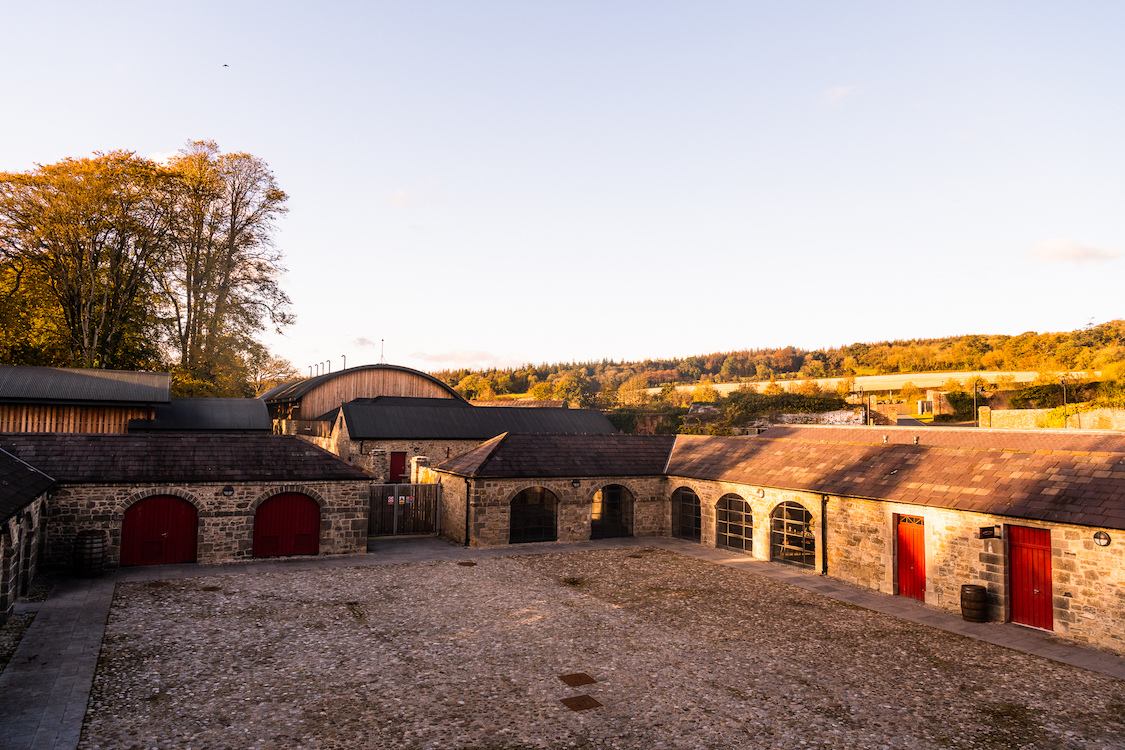 Once an 18th-century castle, Slane is also a legendary music venue, hosting acts such as Queen, David Bowie, The Rolling Stones, and more. 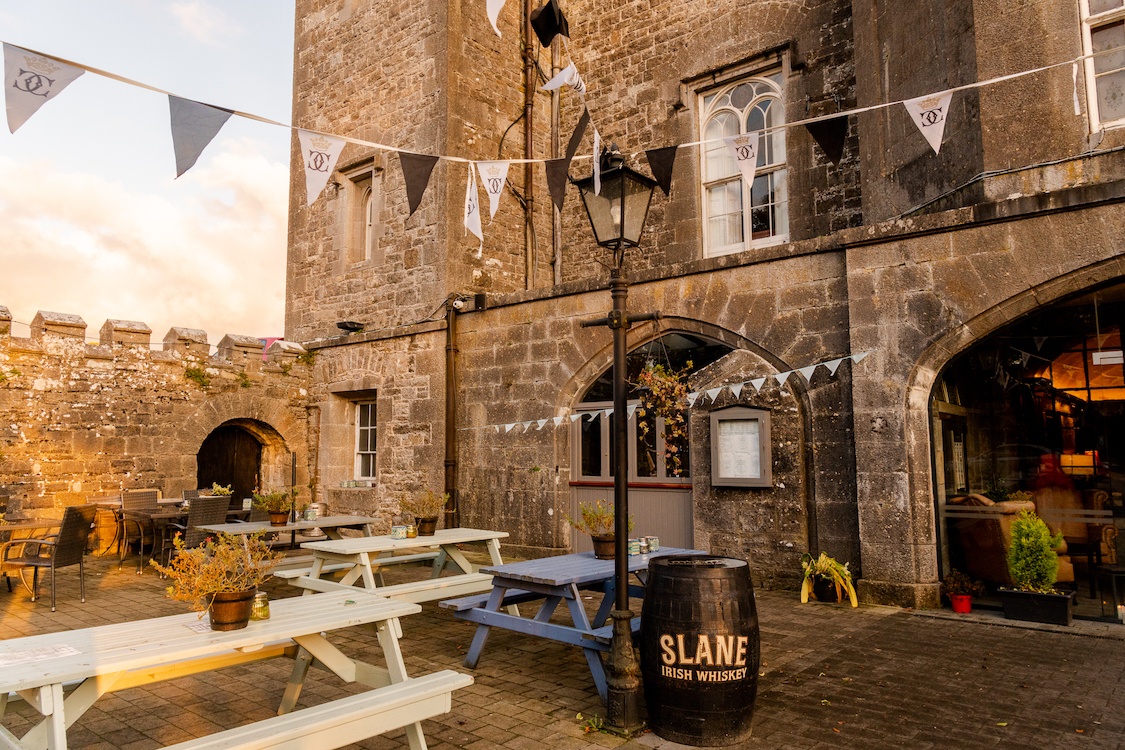 Slane recently opened its own whiskey distillery also worth a stop.

Formerly considered the real-life Downton Abbey, this eighteenth-century castle has since been converted from the Mountcharles’ family home into the number one outdoor rock arena in the world. Since 1981, the castle has hosted some of the most famous musical acts of all time, including Queen, David Bowie, Bob Dylan, The Rolling Stones, and The Red Hot Chili Peppers. The castle is conveniently located between Belfast and Dublin in Ireland’s Ancient East, which makes for the perfect day trip and spot for afternoon lunch. The castle recently opened their namesake whiskey distillery, where you can sample their triple-casked blend and learn all about the whiskey-making process. Make sure to book a tour in advance.