One of many rotating specialty cocktails from Teens of Thailand on Soi Nana in Bangkok. All photos by Jenny Adams.
DispatchJenny Adams

“Bangkok… is a rejuvenating tonic,” American journalist Bernard Kalb wrote in 1961. “The people seem to have found the magic elixir. Life, a visitor feels, has not been wasted on the Thais.”

Kalb’s quote is particularly relevant in 2017. In Bangkok, there is a young, vibrant craft cocktail scene in a place that, for centuries, has been globally hailed for its food. On a recent trip, I set out to investigate the literal tonic and elixirs referred to by Kalb.

To start, I phoned up Nick Braun, an expat from Australia and chief mixologist for Intercontinental Hotels in Asia. He’s also co-opening a new rum-heavy cocktail bar in Bangkok called Asia Today.

We met in Thonglor, a neighborhood littered with juice bars, coffee roasters, and quirky vintage boutiques, not to mention a slew of restaurants and bars. Thonglor is Southeast Asia’s answer to Williamsburg—trendy, hipster, and in love with reclaimed, industrial-chic everything. 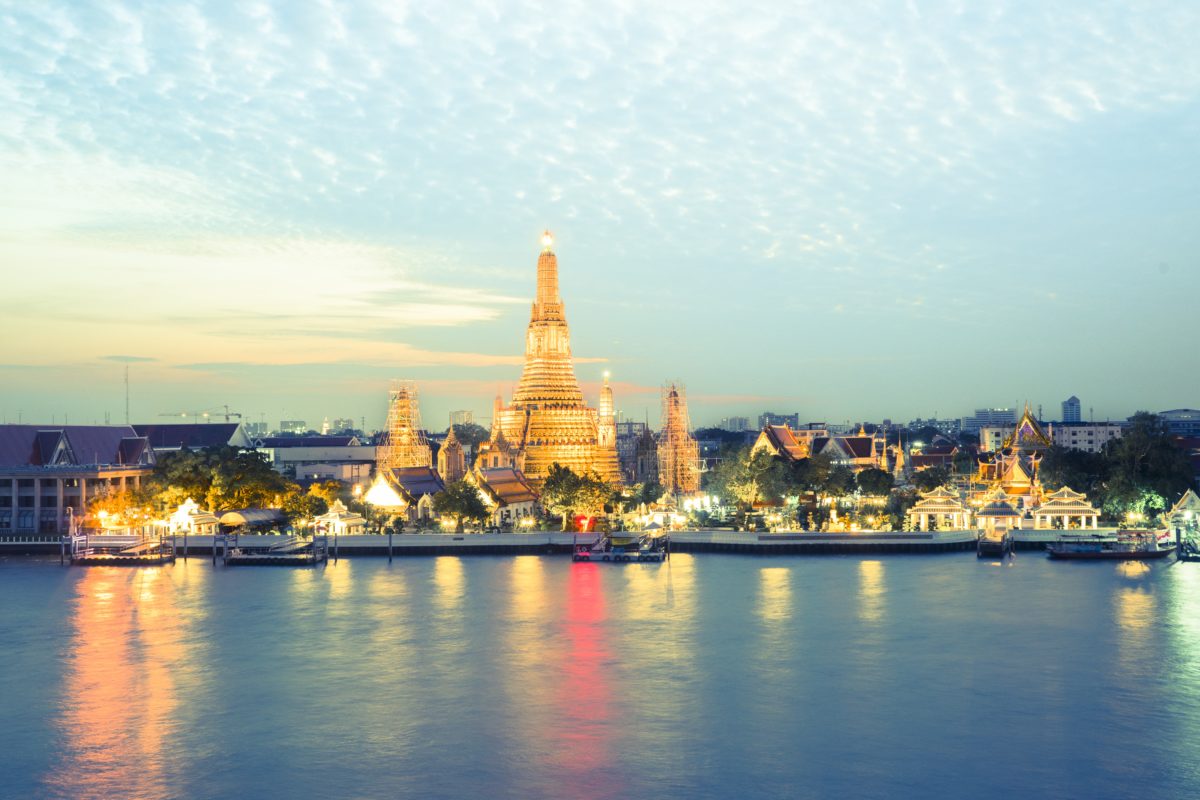 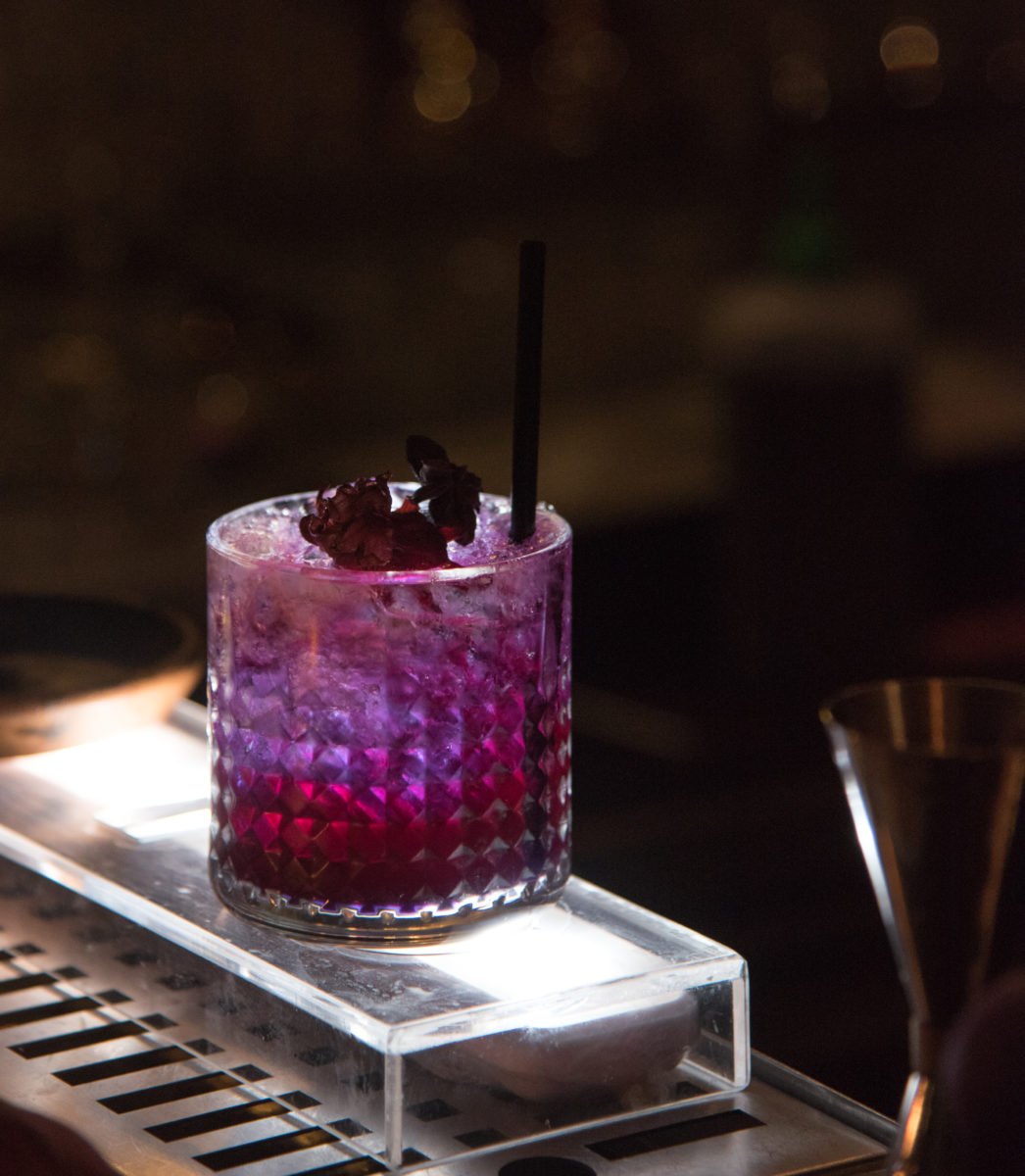 A cocktail from Tep Bar on Soi Nana.

Rabbit Hole starts with an unmarked wooden door. Push and you alight in a slender, trilevel space where black iron railings stretch up exposed brick, supporting hundreds of backlit bottles. This is the domain of well-known Thai bartenders Suwincha “Chacha” Singsuwan and Naphat “Yod” Natchachon, both of whom have competed in Diageo’s World Class bartending competition. The décor is moody Brooklyn or London, but the menu has many delightful, bright Thai moments.

The Cry Me to the Moon, for example, is truffle-infused gin with apple juice, lemon, and a pandan simple syrup. Pandan is to Asian cuisine what vanilla is to American—a flavor tough to describe without saying “pandan,” but possibly faintly nutty, with a toned-down, licorice-like essence. It’s beautiful in this drink, yielding a flavor that’s simultaneously savory and refreshing. Affordability and proximity to ripe fruit makes it a no-brainer ingredient for bartenders. Shrubs are recently making their way into cocktails, too.

“Native fruits and herbs are very commonplace,” said Braun, “and drinks tend to be sweeter here than would typically be found in Western bars.” And while bartenders don’t shy away from sugar, they also utilize the punch of vinegar, just as they would in a food dish. I’m wowed by the 9:45 PM: bourbon, a pandan coconut shrub, vinegar kombu dashi, and fresh lime, garnished with green apple and bonito flakes. There’s umami and coconut, that herbaceous pandan, and a punch of acid, all balanced by the heat and corn of Kentucky bourbon. 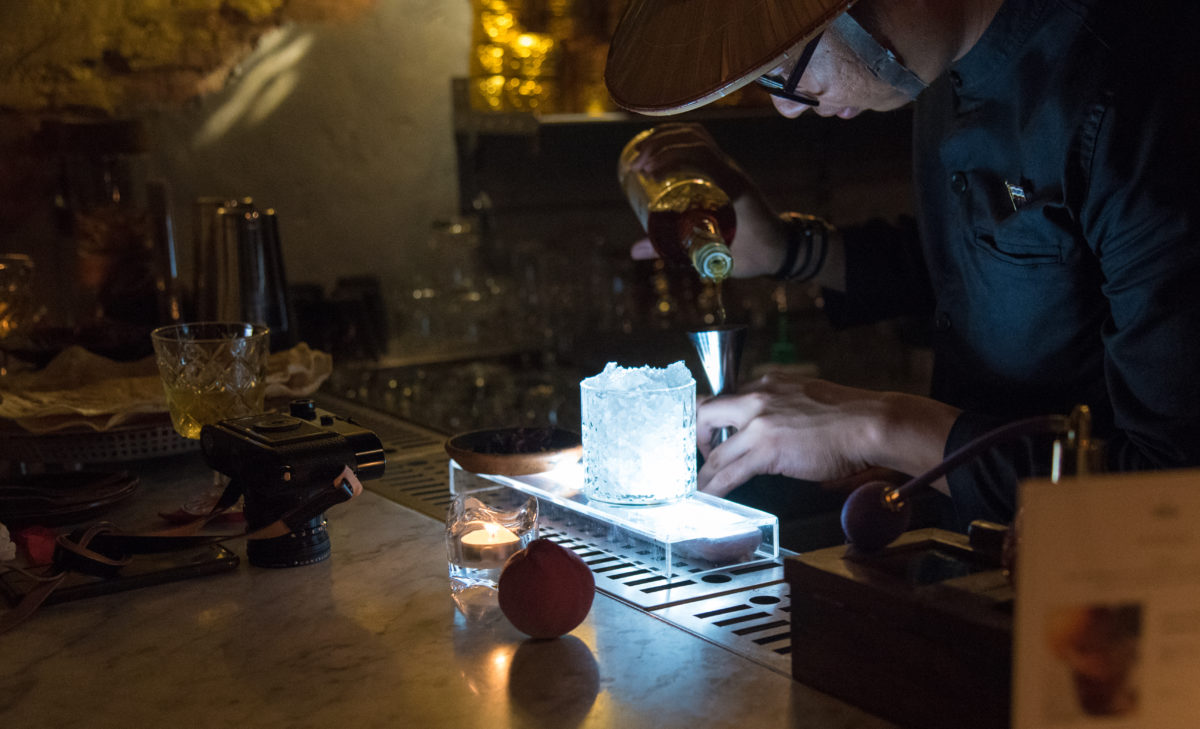 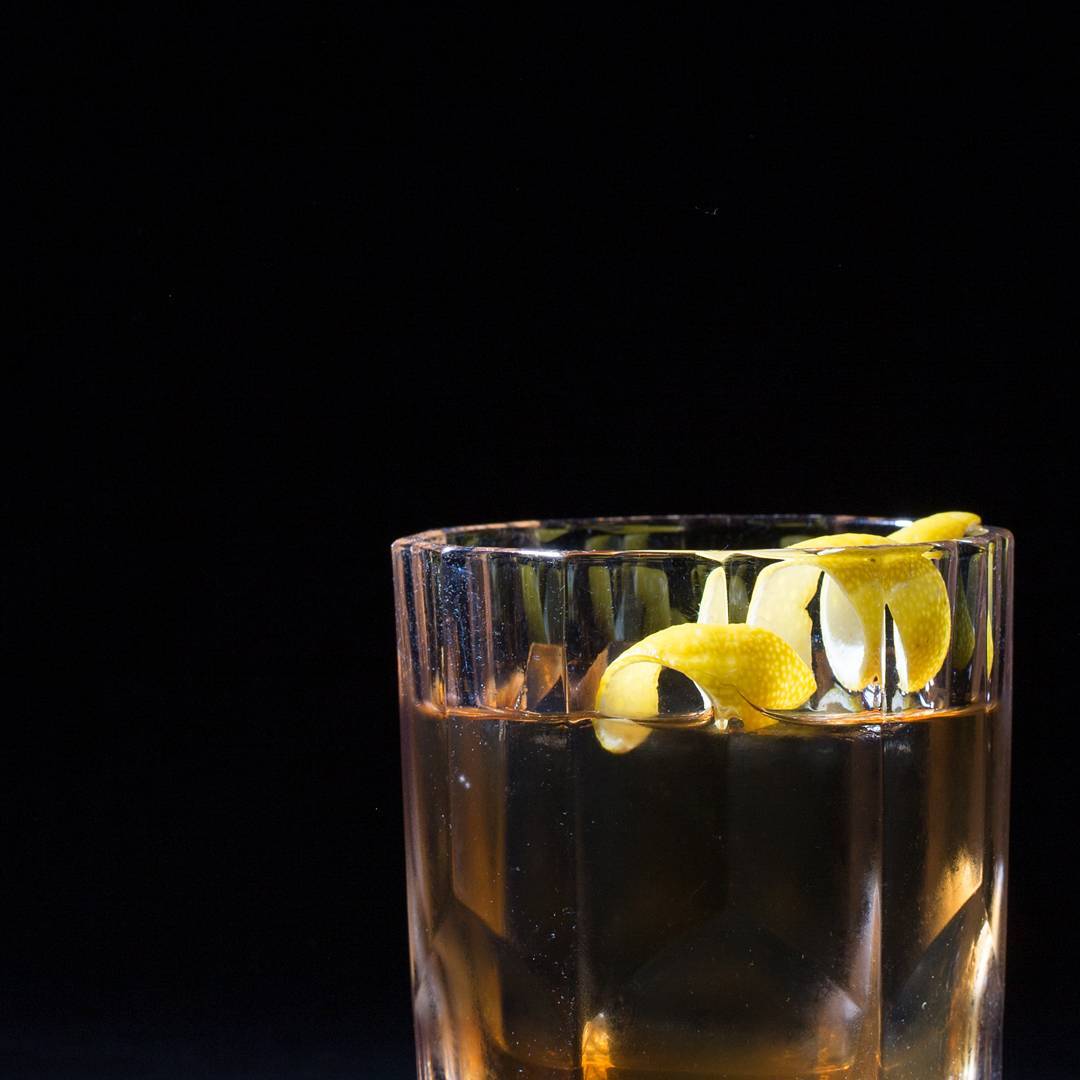 Bangkok is still finding its cocktail identity, but drinks like this one showcase what will hopefully become mainstream. “I’d say the city’s drink style is ‘old world meets new,’” Braun continued. “While Bangkok has, for the most part, been a follower, stuck a few years behind the world’s leading cities, originality and innovation are becoming integral to the ethos of leading bars here.”

Aiding and abetting our established buzz, we strolled a few blocks to BackStage, inside the lobby of the wonky PlayHaus Hotel. The design of BackStage is meant to mimic a theater and feels akin to entering the ringmaster’s car of a circus train. You push through heavy velvet drapes to a room of mirrors all rimmed in marquee bulbs and overstuffed Victorian settees. While the designers gave in to extravagance, the bartenders stayed focused with a short list of solid cocktails.

You can feel the local scene at BackStage, and my attention was stolen from conversations of expat life when a crème brûlée torch clicked and a slice of corncob was blasted. I ordered a Sazerac, which arrived a perfect testament, but now I was curious about these charred kernels. They were for Earthbeet, a beet-infused tequila drink with vermouth and Campari; a crowd favorite that would become my second round.

Night two of our drinking tour of Bangkok followed a day of downpours. But thankfully, the rain had stopped. In the remaining puddles, brake lights and paper lanterns reflected warped versions of the Chinese-style shophouses that lined either side of a small side street.

We’d come to Chinatown to explore one of the most exciting places for craft cocktails in Bangkok: Soi Nana. In Thai, soi means alleyway, and Nana is the name of the Chinese family who has owned most of the real estate here for hundreds of years. At Soi Nana, you’ll find Tep Bar, which opened in 2015 inside a 110-year-old shophouse and is equally popular with tourists as it is with locals.

As we entered through the massive wooden door into a single family home turned bar, we were asked if we had a reservation. It’s a question at odds with Bangkok’s Chinatown, where the biggest draw has always been street food consumed casually at metal tables strewn on sidewalks.

Inside, a man was playing a ranad ek, Thailand’s wooden xylophone. A window to the kitchen behind him offered a show when sprays of fire burst up every few minutes. And behind the bar, drinks were being shaken by a Thai bartender wearing a traditional woven helmet. Half the menu was devoted to ya dong, a rough, clear spirit infused with medicinal herbs and roots. Just as moonshine is reappearing on menus in America, ya dong is being revisited by craft bartenders in Thailand.

“It’s a local, herbal liquor, famous in the old times for its ability to enhance your sexual power,” said cofounder of Tep Bar Asawin Rojmethatawee. “It is one of the best drinks and drinking cultures of Thailand, which is about to disappear. We need to keep it alive.” 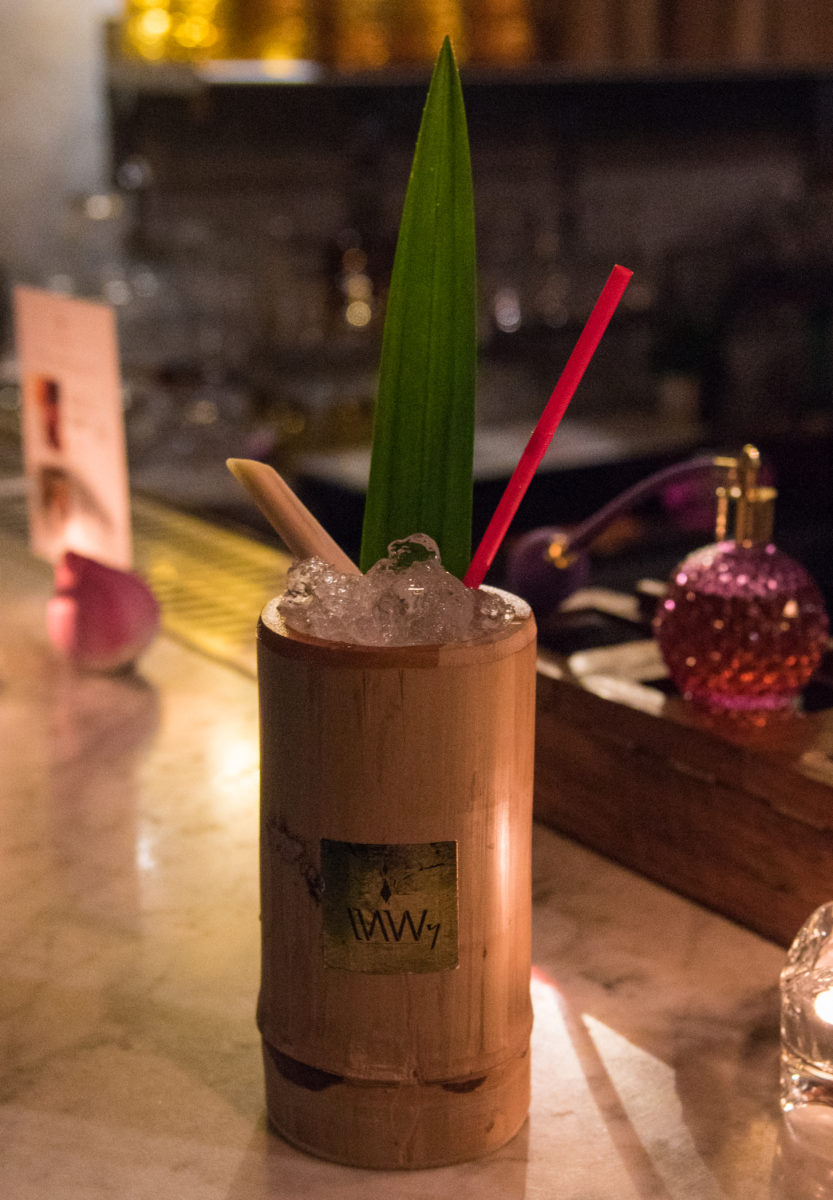 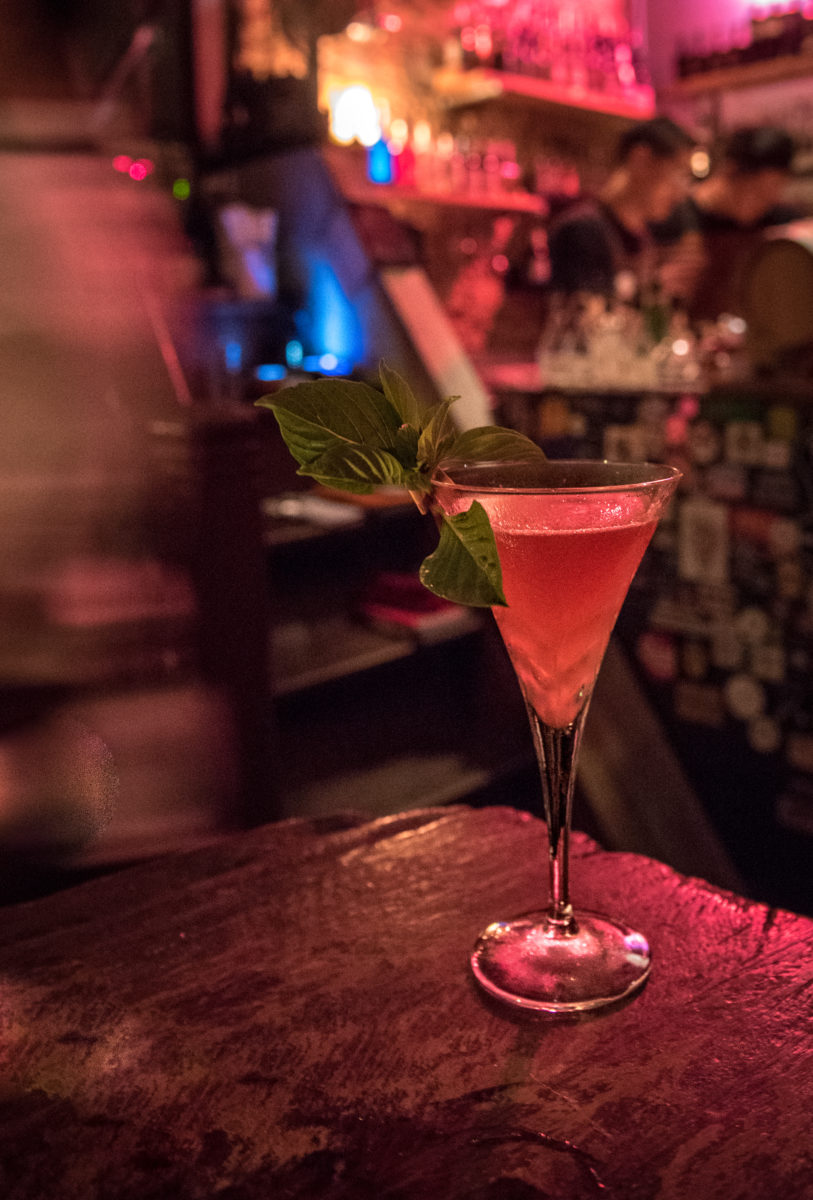 I was reminded of Jägermeister when I tried it—there was this college flashback in my mouth, in a setting that was as far from my alma mater as anything could ever be. I may not have loved ya dong, but I thoroughly enjoyed the Like a Virgin with rum, lemongrass syrup, and fresh ginger over crushed ice, as well as the frothy Nila Pat—egg white, dark rum, and ginger, garnished with a square of black jelly wrapped in gold leaf.

We walked (ahem … stumbled) 10 seconds down Soi Nana to Teens of Thailand, one of Bangkok’s most popular cocktail spots that is also one of its smallest. This gin bar’s few high tables are bathed in sepia candlelight, and the worn stone walls are covered in vintage Asian film posters. The menu changes daily, always offering goblet-sized G&T’s with your choice of tonic and fresh fruit, alongside signatures created with rose essence or fresh watermelon or aromatic Thai basil. It’s an excellent place to try the Bangkok-distilled Iron Balls gin, too.

If Tep was the first to open on Soi Nana, Teens solidified the lane as a drinker’s destination when it debuted in 2016. Other options on this stretch include a craft beer bar Pijiu (another great one called Let the Girl Kill is about 500 yards away on Charoen Krung Road) and Ba Hao, a reimagined Chinese house with upscale street food, twisted Negronis, and beer-based cocktails.

“Soi Nana is quite representative of the current direction of the Bangkok scene as a whole,” says Braun. “It has transitioned rapidly from an unknown stretch of shophouses and noodle stalls to a nightlife enclave.”

It’s much like Bangkok as a whole, where the push and pull of old and new is forever carving the city in different ways. 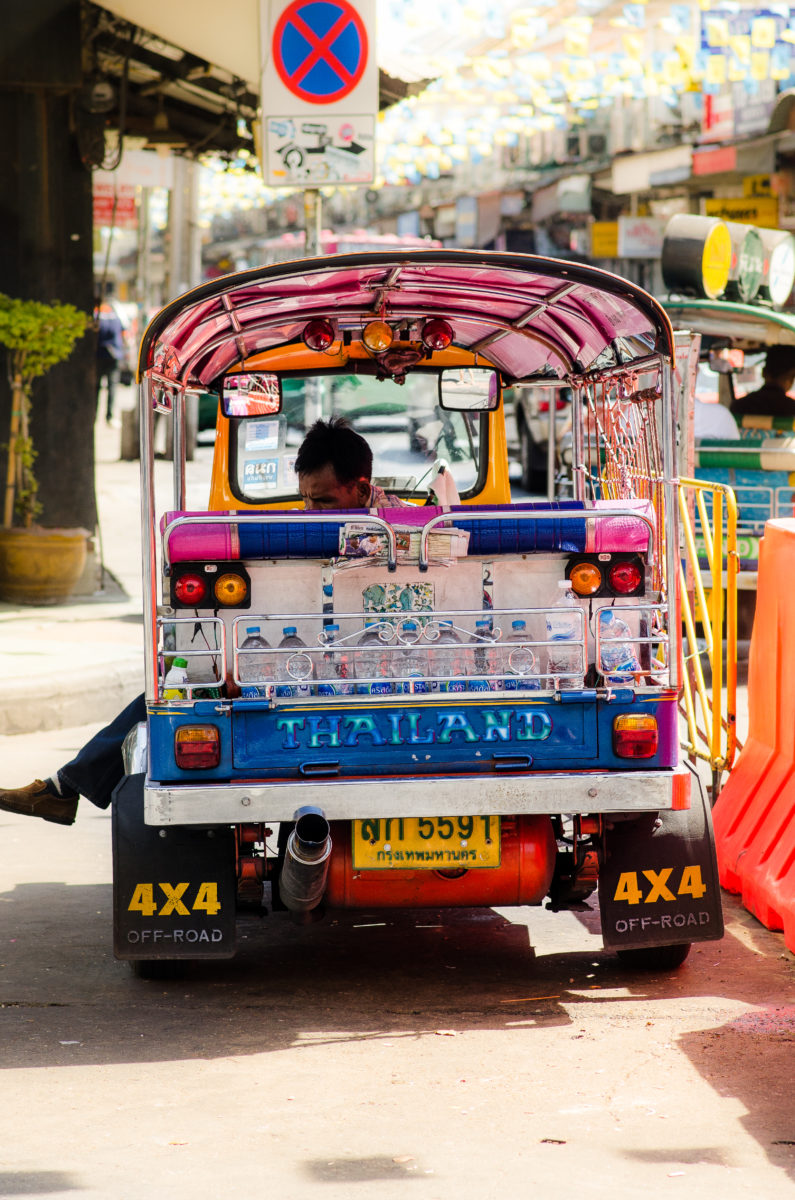 A tuk tuk in Bangkok.