Queering the Great Outdoors: A Road Trip From Badlands to Glacier National Park

Bison roam freely throughout the Badlands. We stopped every minute to capture the changing landscape — this rainbow perfectly framing a bison brought literal tears.
DispatchTimmy Shivers

When I go into an REI I feel like a fraud. Yes, I am a gay man living in New York City, but it’s not because I am gay that I feel this way (though I do often pull the g-card as a coping mechanism for my own discomfort). I feel this way because I grew up gay seeking belonging, and anything relating to the outdoors — typically a gendered experience — was not the place I was going to find it. Camping and fishing and grilling and climbing rocks were for boys, and unless you’ve escaped modern civilization, you know boys aren’t the safest for a 10-year-old uncovering his sexuality. So, generally, I ignored those spaces. I opted for musical theater; or better yet, my mom.

The older I get, however, the more I realize I want to be there, out there, in the wild, with Reese Witherspoon. I’ve come to understand the healing power a tree can have on a tired soul, and let’s be honest: 2020 is the year of a tired soul. So when my two friends proposed a month-long road trip around the U.S., with National Parks anchoring the route, I accepted with gusto. We would start and end in New York City, and everything in between would be nature, nature, and more nature.

The ultimate beginner’s guide to planning a road trip→

We drove as far west as we could the first three days until we made it to Badlands National Park, our first park of the trip. Driving slowly during sunset with the windows down along the Badlands Loop Road, we felt as though we had finally made it. We were en route to our campsite when a small storm passed, revealing a rainbow in its wake. We turned a corner to find a bison crossing the street, gently moving from one sprawling field to the next. The rainbow perfectly framed the scene.

We pitched our tent thanks to a combination of intellectual prowess, confusing directions, and a YouTube tutorial that wouldn’t load. As we finished (an hour later), I saw a group of 20-something-year-old men who seemed to have it all figured out — their tent, their propane cookery, their truck, their shirtless bodies, and their laugh. If anyone knew how to walk into an REI, it was them. Suddenly there I was, 10-year-old Timmy rushing in to steal the scene, instinctually asking: Do you accept me?

Yikes. To be clear, I’m aware this question isn’t unique to the gay community. Every person asks this in their lifetime. But I’m finding more and more that that question is intimately linked to my queerness. Do I belong, work? Do I belong, church? Do I belong, school? That relived experience is where queer folx often reside, the outdoors being no exception.

It is nice, even healing, when those who have historically been the gatekeepers welcome and accept. I would have loved an interaction that day that indicated that those boys accepted me “in.” However, my queerness — my difference — teaches me time and time again that when we allow the barrier to entry to depend on those who have upheld the existing power structure (to their knowledge or not), those outside that structure are at jeopardy of diminishing their value; Timmy is still looking outside himself for worth. 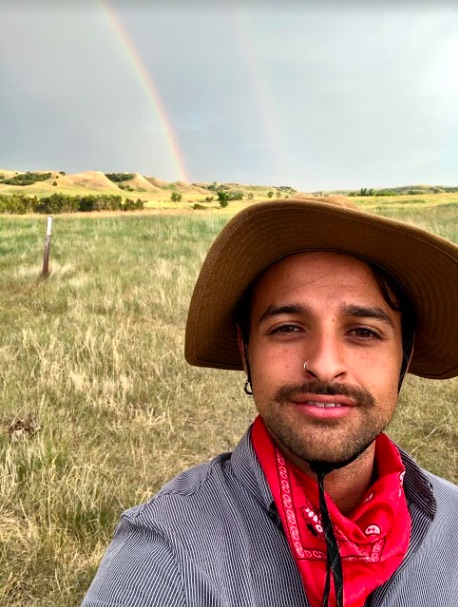 As above, so below. Writer and photographer Timmy Shivers finding signs of queer acceptance everywhere in nature. 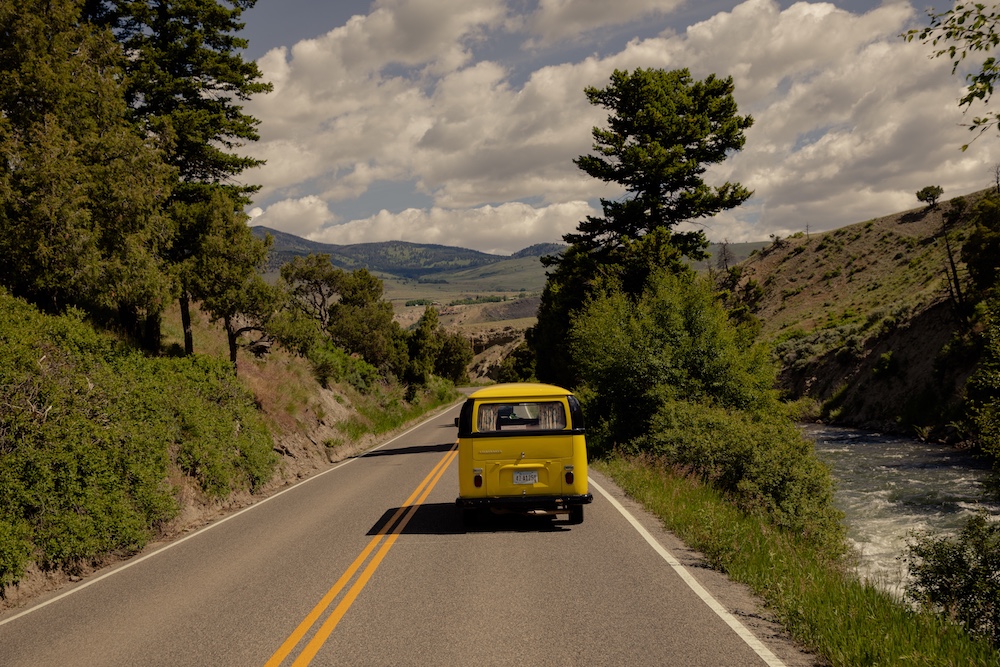 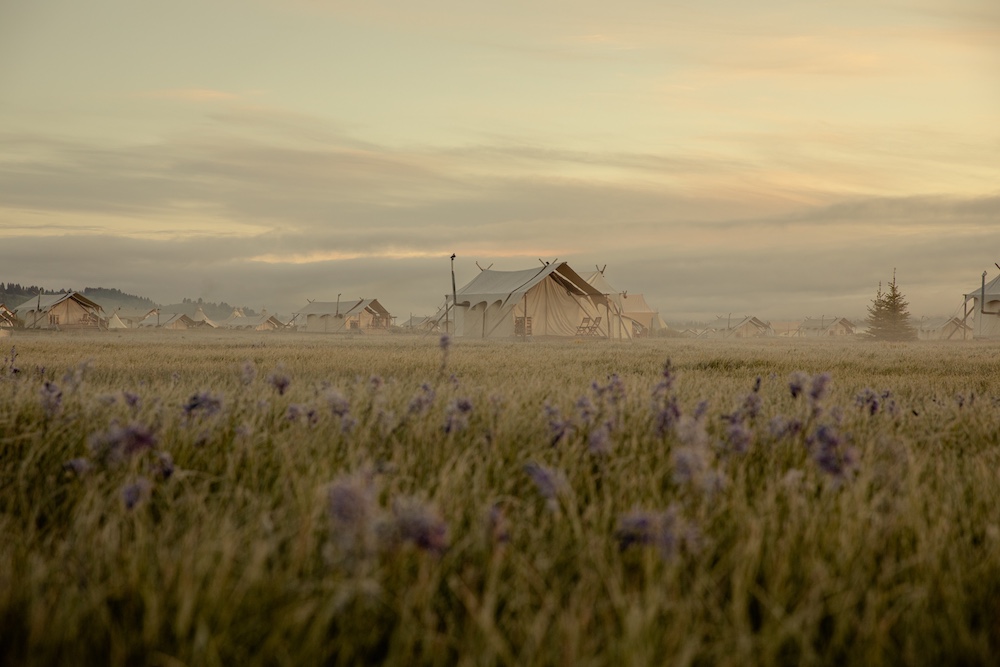 What we need then is to imagine a new system entirely, one that works for all. Those trailblazing this vision are the likes of Pattie Gonia, self-described as “the world’s first backpacking queen,” and Elyse Rylander, founder of Out There Adventures, a non-profit dedicated to empowering queer young people through thier connection with the natural world. Their reclaiming of a space that wasn’t built for people like them gives permission for others to do the same.

To be fair, the National Park Service has made systemic change in the right direction. In 2014, the NPS launched an LGBTQ Heritage Initiative to increase representation of LGBTQ sites, creating a national map of LGBTQ places across the country. Yet, while the NPS works to preserve sites and structures in American history, LGBTQ affilianted places are underepresented: LGBTQ sites make up .08 percent of the 2,500 National Historic Landmarks and .005 percent of the more than 90,000 places on the National Register of Historic Places.

It’s also important to note that queer people have lived in the American west throughout history—even well before European colonization. Native American “Two Spirit” people (referring to men and women who combine traditional male and female roles) have been celebrated within their culture for centuries. And in the 1850s, as settlers moved to western states with less restrictive laws than those present in eastern cities, there was more freedom for self expression.

But we are still far from an outdoors designed for all. For those in the outdoor industry who have clout and influence in their circles: Fight for more LGBTQ+ representation. Hire queer folx, tell queer stories, commission queer artists… and no, not just in the month of June. For those on the margins, we must continuously remind ourselves of our own power in building the communities we desire. It’s no longer enough to be accepted in the status quo; when it is safe to do so, we must carve a new path where we too are the bearers of belonging. This is where the queering of the great outdoors begins.

8 tips for your first hiking adventure→

I started to feel this shift in awareness in the Badlands, and that pride stuck with me during the rest of the 11,000+ mile road trip. We continued our loop and hit Grand Teton, Yellowstone, Glacier, Olympic, Crater Lake, Redwood, Yosemite, Death Valley, Zion, Grand Canyon, Arches, and Great Smoky Mountains. And after visiting all of these sanctuaries, let me tell you…nature is queer as fuck! Have you ever laid eyes on a field of wildflowers? When was the last time you watched a sunset? Have you ever heard a bird sing?!

Park after park, hike after hike, successfully pitched tent after successfully pitched tent, I realized I can begin to tell myself a different story the next time I step into an REI. What is travel if not a deepening of the self, a mirroring of who you are in the world and an opportunity to challenge that which is reflected? Especially in nature where I promise—you are accepted. 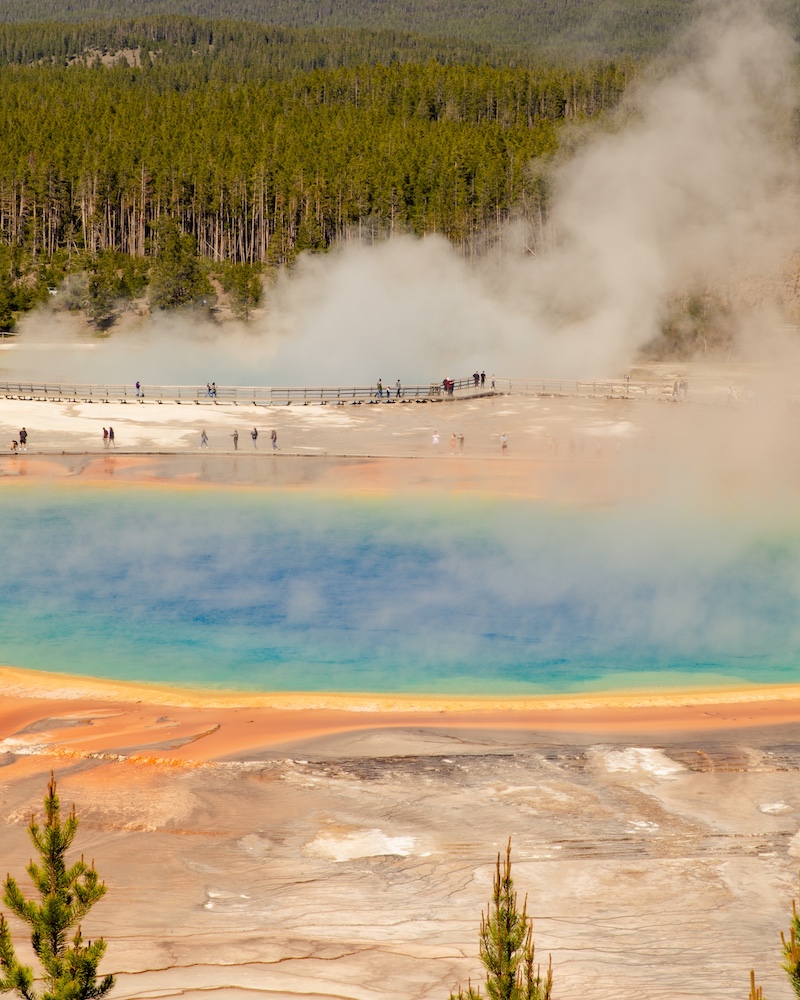 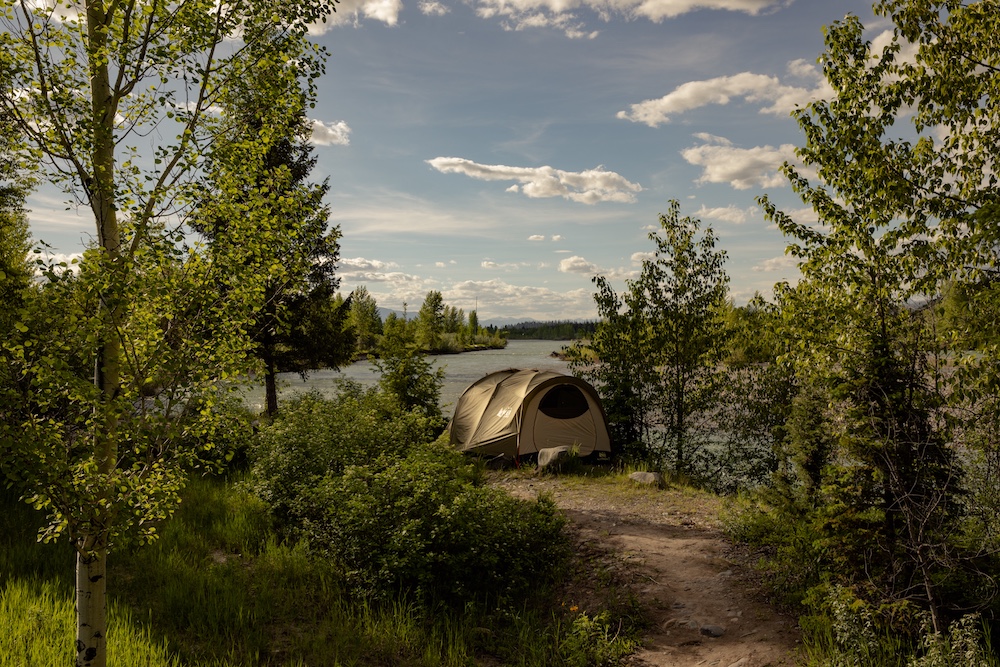 Our campsite along the North Fork Flathead River in Polebridge Montana. On the other side is an entrance to Glacier National Park. 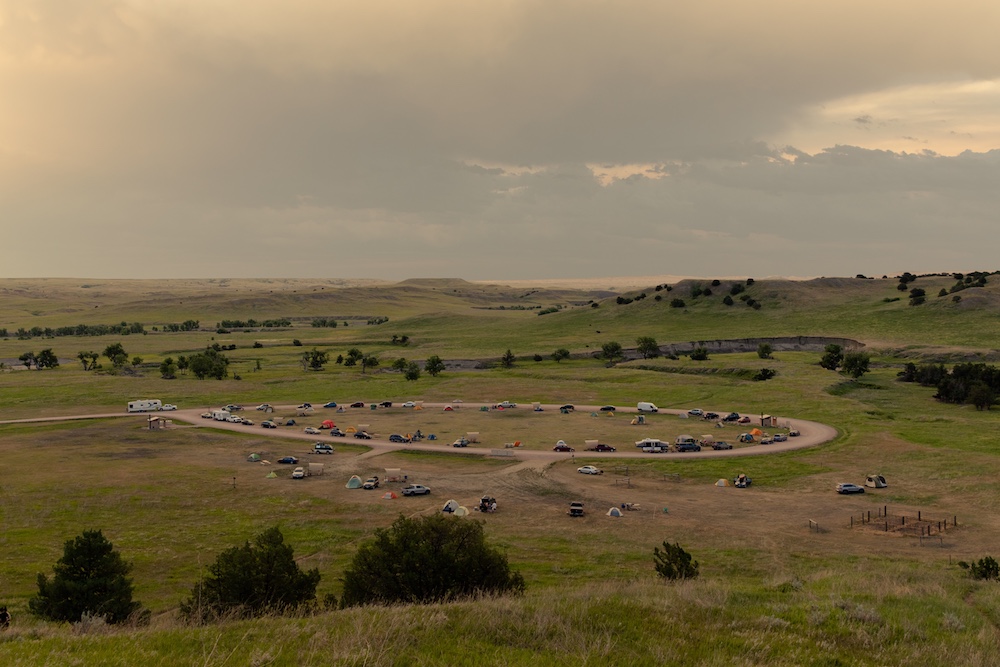 Sage Creek Campground in Badlands—The site of our first night camping on a month-long road trip.

Eat: We brought a Yeti on our trip with all the goods for a classic turkey sandwich. However, I will say that a Twister from Dairy Queen on the way was one of the better ideas we had.

Stay: We attempted to camp at Sage Creek Campground. If you’ve got the right equipment (a tent that can withstand heavy wind), I couldn’t recommend it more. If you find yourself in a pickle like we did, Rapid City was an hour away and had cheap, easy hotel options.

Other highlights: We drove through Badlands during sunset. A small storm passed by, and when it had come and gone, a rainbow appeared. Everything was suddenly 10x better.

Do: We passed by Mount Rushmore on our morning out. It is weird and absolutely worth 10 minutes of your life. We then plugged in The Chicks (formerly known as the Dixie Chicks) for the long haul from Rushmore to Yellowstone, heading south through Casper and then towards Grand Tetons National Park. The Tetons are just south of Yellowstone, but well worth a drive through (and more, if you have time!).

Eat: Grant Street Grocery and Market in Casper is the perfect halfway between Badlands and Yellowstone stop for food and coffee. Upon arrival in Yellowstone, Undercanvas has an onsite restaurant.

Stay: We stayed at Undercanvas, and wow. The site was just outside the western entrance of the park, which provided easy access in and out. Beyond proximity to the park, the tents were an experience of their own.

Do: We knew that we only had one full day in the park, so we had to be selective about what we saw. Luckily, I think we chose wisely: Lamar Valley, The Grand Prismatic Spring, and Old Faithful. Lamar Valley was my personal favorite and where you have the highest chance of seeing wildlife — we saw three bears and a moose!

Eat: In the town of West Yellowstone we enjoyed a meal at Ernie’s Bakery and another at Taqueria Malverde—a Mexican food truck that did not disappoint.

Stay: Hipcamp quickly became our best friend on this trip (think Airbnb for campsites). We found a spot for our second night in West Yellowstone, just miles away from our previous Undercanvas night.

Other highlights: Sunsets in West Yellowstone were some of the prettiest sunsets I have seen in my life. 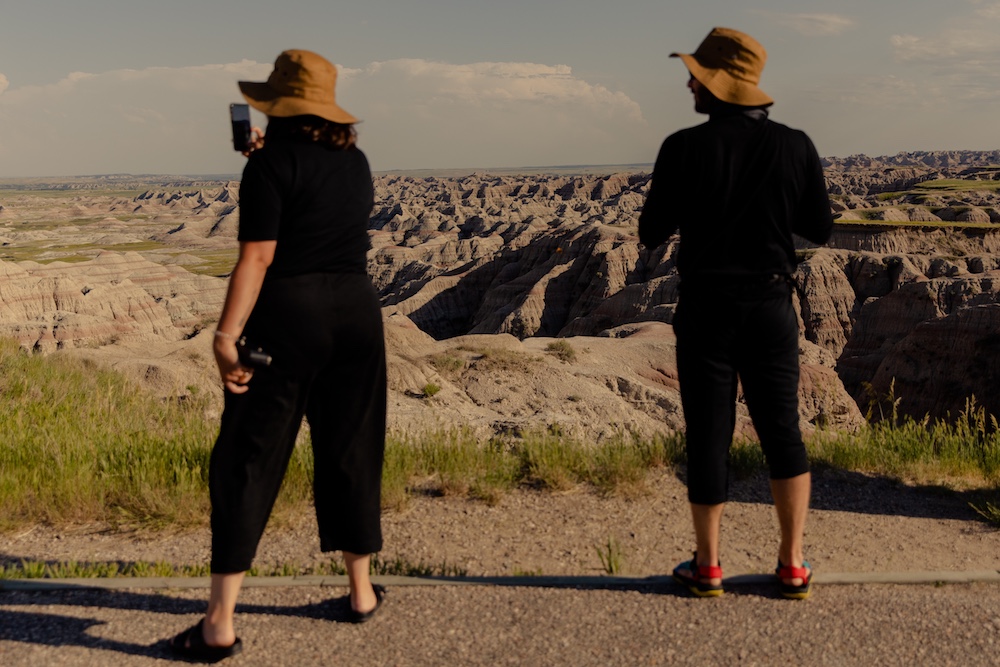 Once we officially entered Badlands National Park, we pulled into the first rest-stop to admire and photograph the landscape (which is truly mars-like). 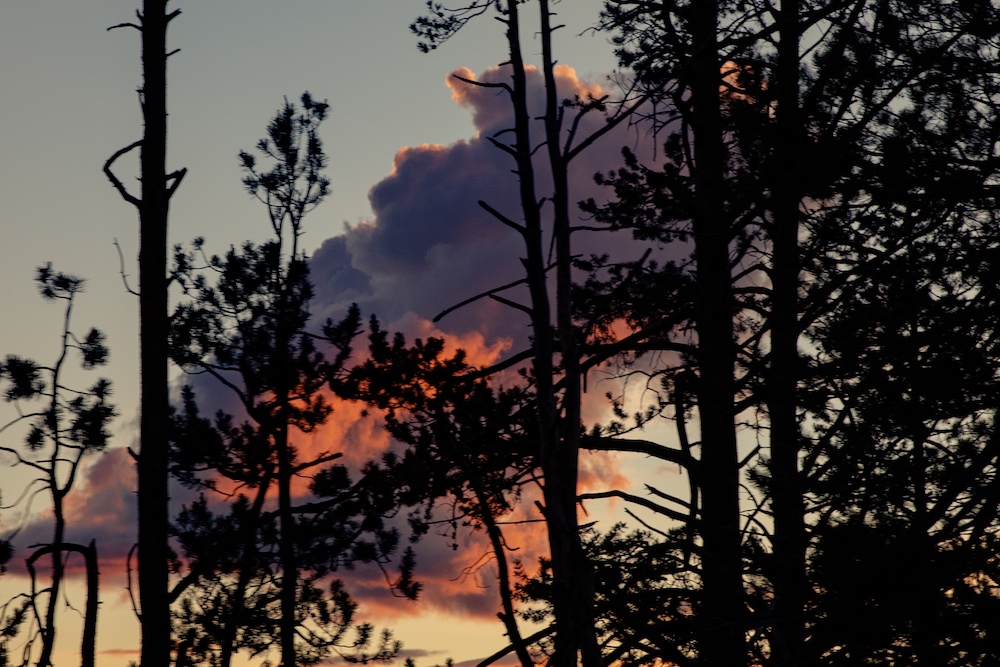 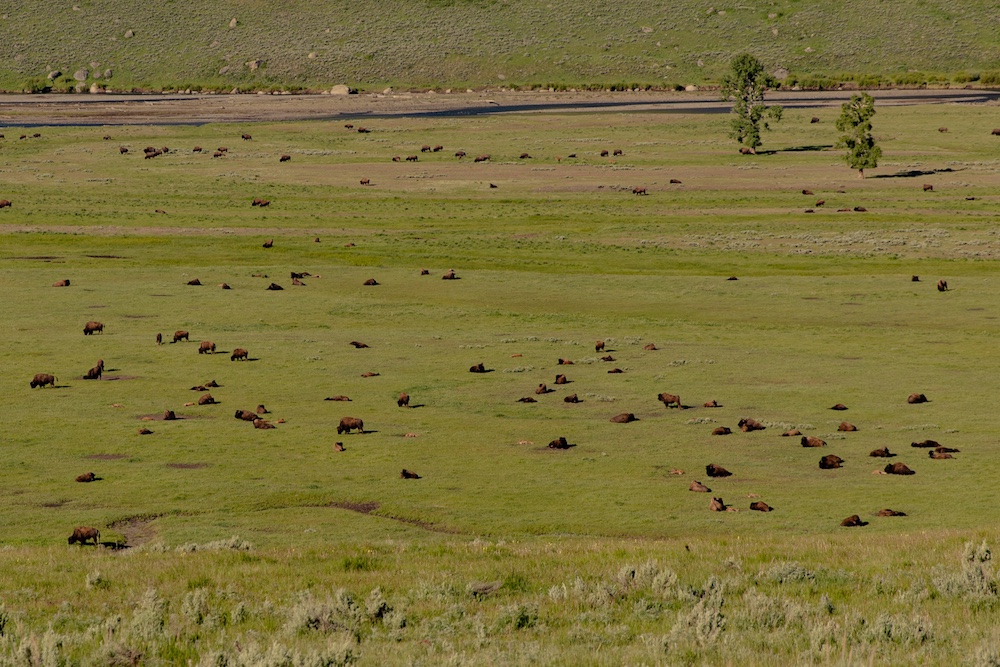 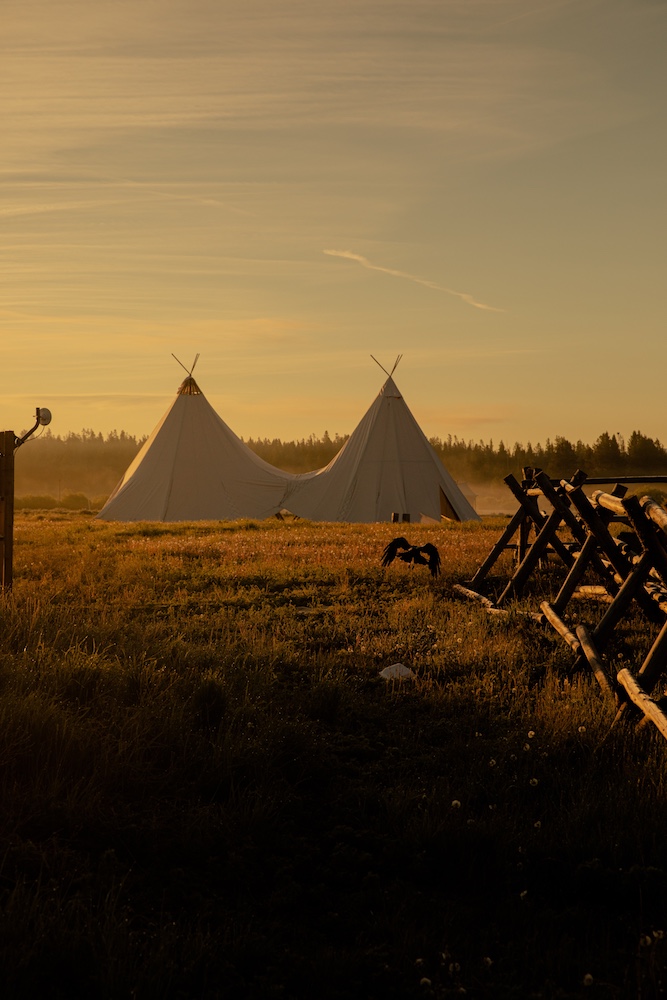 Do: Just as we thought we had exhausted the beauty of this part of the country, we entered Montana. Save a few cities along the way (Bozeman and Butte), Montana is the epitome of what I wanted from this trip — wide open spaces. If you maintain a “the journey is the destination” mentality on a road trip, Montana is for you.

Eat: Northern Lights Saloon & Cafe was thankfully open when we arrived. If you’re staying in this part of the woods, plan accordingly: there are not many food options.

Stay: The town of Polebridge, just outside the northwestern entrance of Glacier National Park, is my dream come true. It is small and remote, but somehow managed to have a bakery and cold brew coffee. What more can a New York gay looking for an escape ask for? We spent the first two nights at a glamping site.

Do: Going through the Sun Road was the number one priority on our list. We could only drive a portion of it because of restrictions due to Covid, so we took the opportunity to see what we could by foot. We hiked the Avalanche Trail and were blown away by the views. The hike was moderately difficult, but the views were extreme. On our second day my two friends left for Numa Ridge Trail; I, however, stuck around and spent time on the river doing nothing. While they raved about the hike (it was difficult!), I highly recommend a good ol’ nothing day to do what you came all this way to do: sit, stare in a river, and contemplate why you still live in New York City.

Eat: Again, food is limited, so find a plan that works for you. We rotated between Northern Light Saloon & Cafe and Polebridge Mercantile & Bakery, which conveniently are next to each other.

Stay: We found a campsite just along the North Fork Flathead River that proved to be the best night of the trip. The site was off of Glacier Drive, just past the Polebridge Mercantile & Bakery. While I was sad to leave the comfort of a glamping tent, sleeping on the river was unmatched.

Other highlights: If a town like Polebridge is too remote for your taste, check out Whitefish, MT. It tickles the allure of modern conveniences while just a short drive from the west entrance of Glacier via route 2.