Worth Traveling For: AutoCamp Yosemite

There are certain places—show-stopping hotels, award-winning restaurants or local dive bars, incomparable vintage shops—that are worth planning your whole trip around. AutoCamp Yosemite is one of those places.

Holding tree pose was more challenging than usual on the deck of AutoCamp Yosemite’s Clubhouse. Overlooking nearly 70 shiny Airstreams and more than a dozen Luxury Tents, it was hard to hold a focal point.

“It’s a fun vibe,” said instructor Heather Sullivan, after an hour of “Yoga in the Grove” at AutoCamp Yosemite.

Whether it was precariously stacked giant Jenga blocks on the lawn, red Radio Flyer red wagons loaded up with provisions, or people of all ages skipping rocks in the pond, it seemed everywhere I looked there was fun to be had.

Accommodations at AutoCamp Yosemite range from Airstreams to tents to cabins. Custom Airstream trailers come with a queen bed, futon, kitchenette, heat and air conditioning, and a bathroom with a walk-in shower. You aren’t exactly roughing it in the Luxury Tents, either. Available April through October, there’s heat and an electric blanket on chilly nights. Bathrooms and showers are located in the Clubhouse. There’s also a pair of family-friendly cabins with a private bedroom and bunk beds.

Located in relatively unknown Midpines, a tiny “census-designated place” in the Sierra Nevada foothills of central California, it’d be easy to spend a few days here lounging poolside, riding bikes, roasting marshmallows, and soaking in the spa-like effects of a place that feels like it’s in the middle of nowhere. But people really come here for its famous neighbor, Yosemite National Park, only a 45-minute drive away. 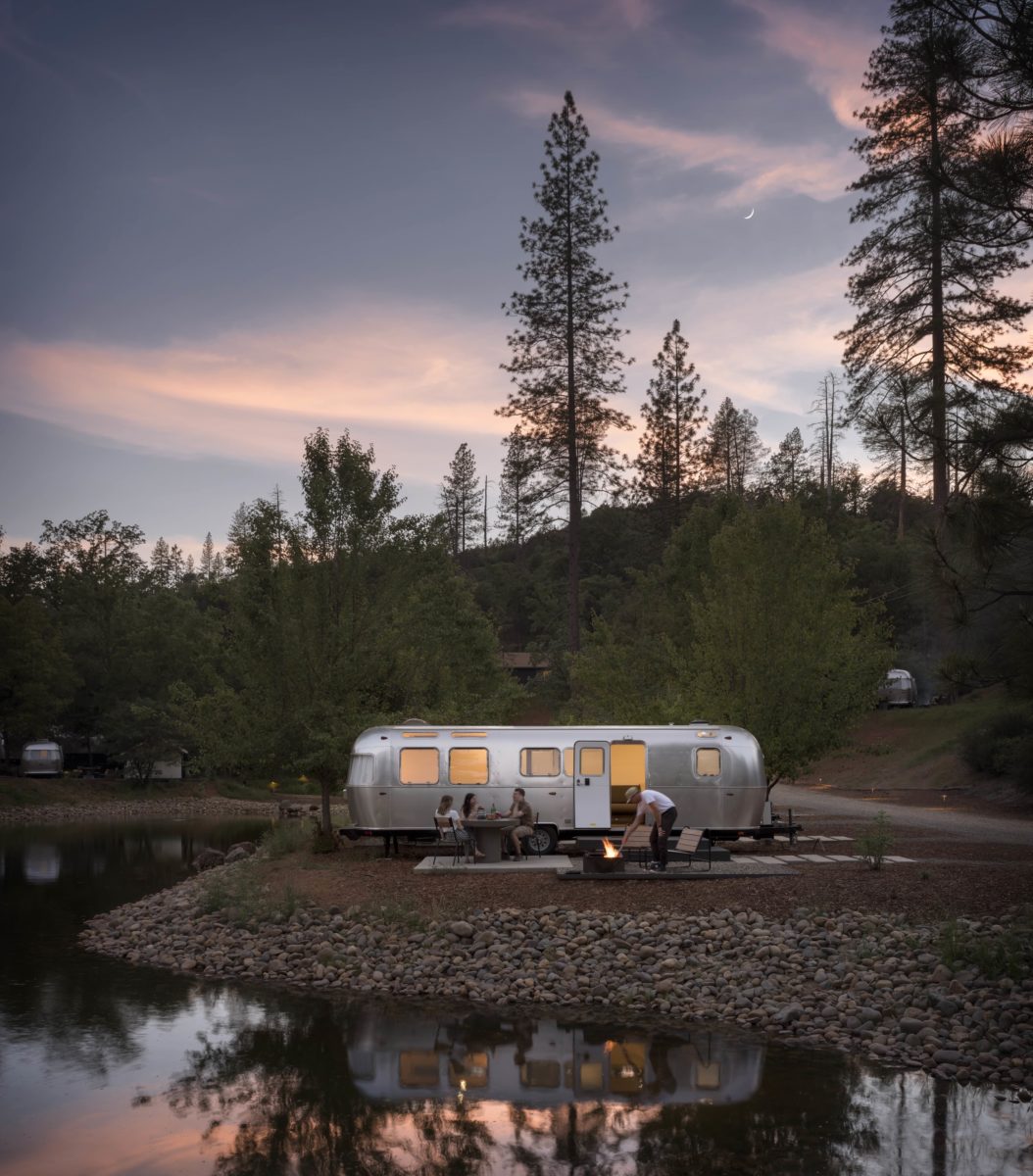 Campers at Autocamp Yosemite can "rough it" in a classic Airstream trailer. 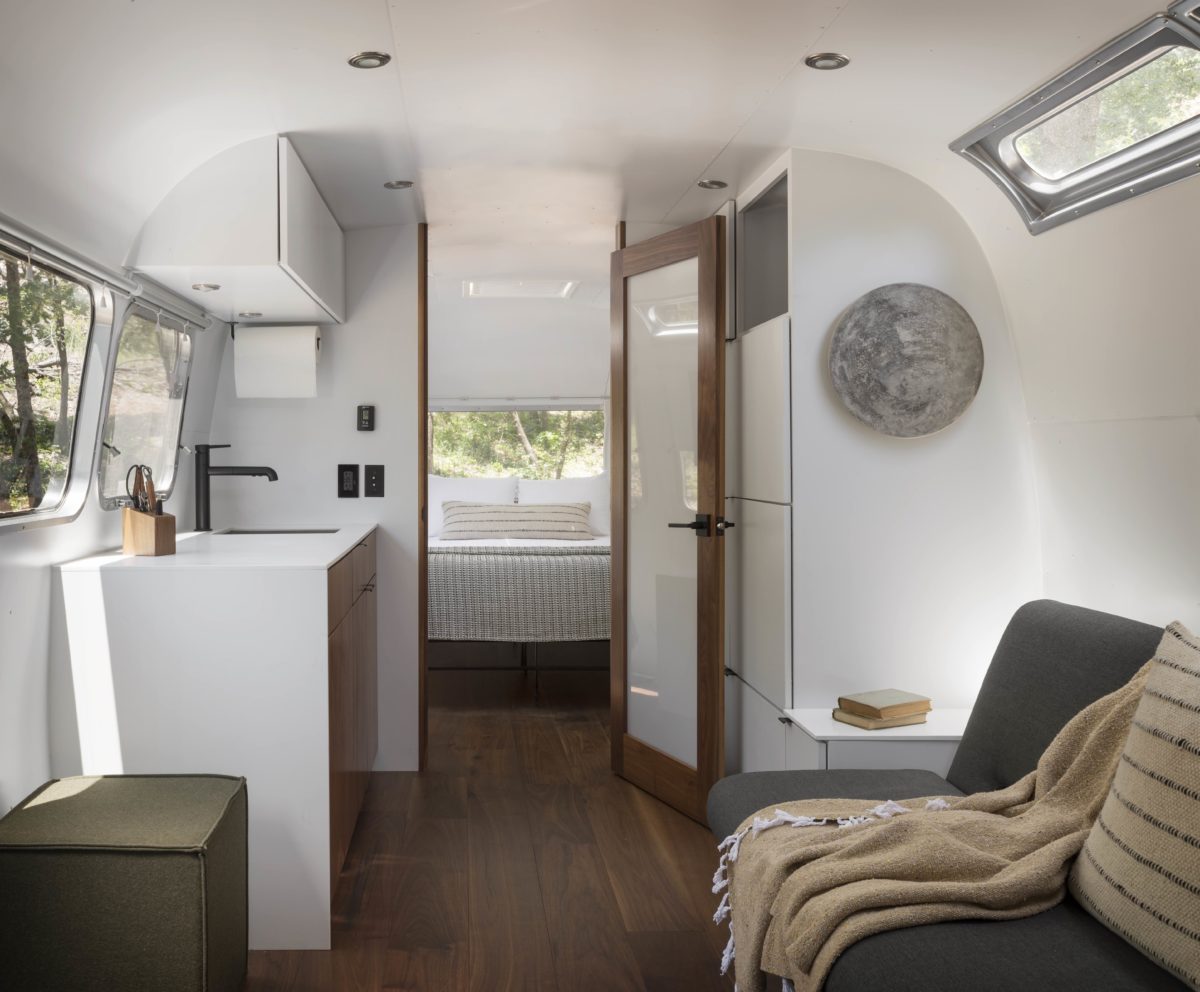 The living room of an Airstream suite. 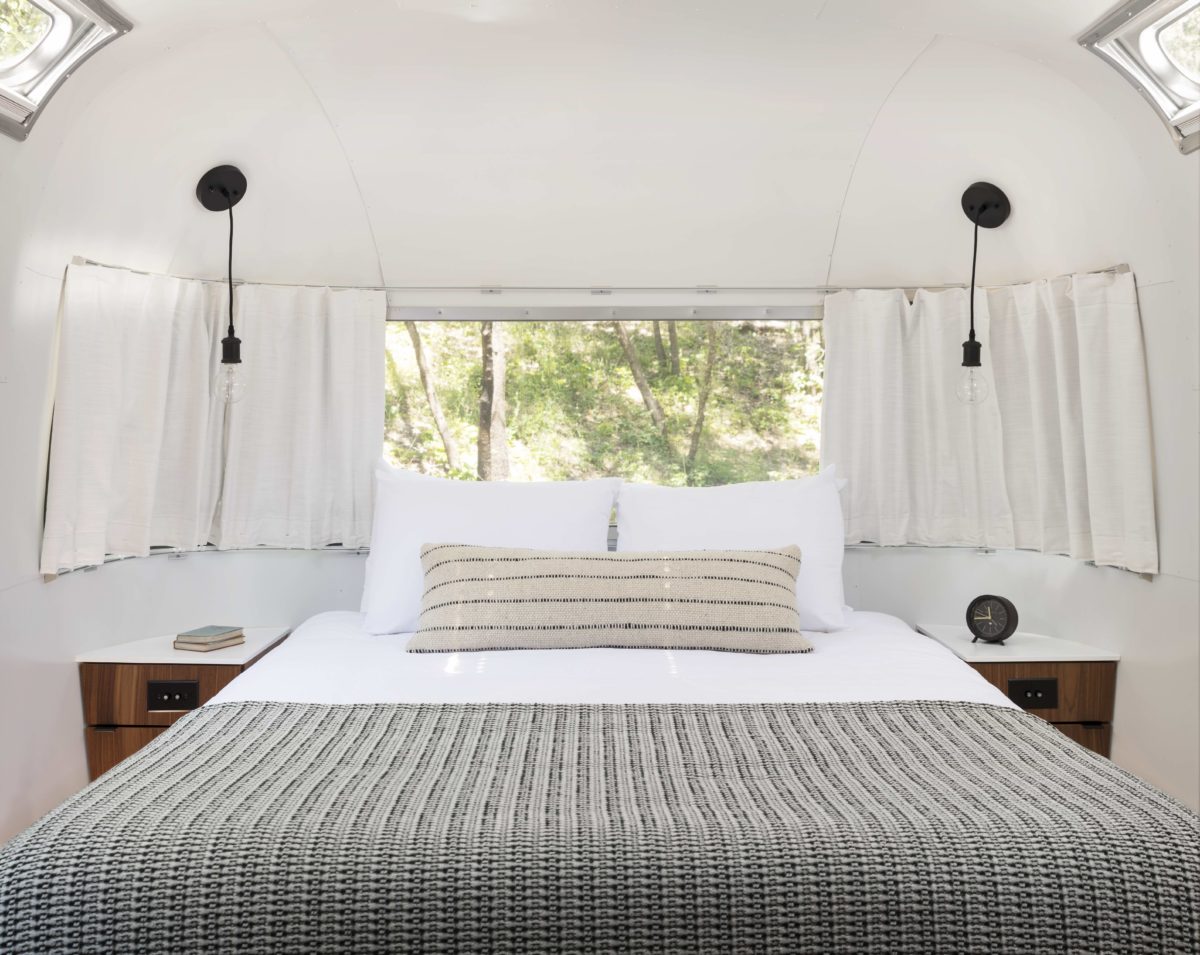 Every trailer comes equipped with a queen-sized bed. 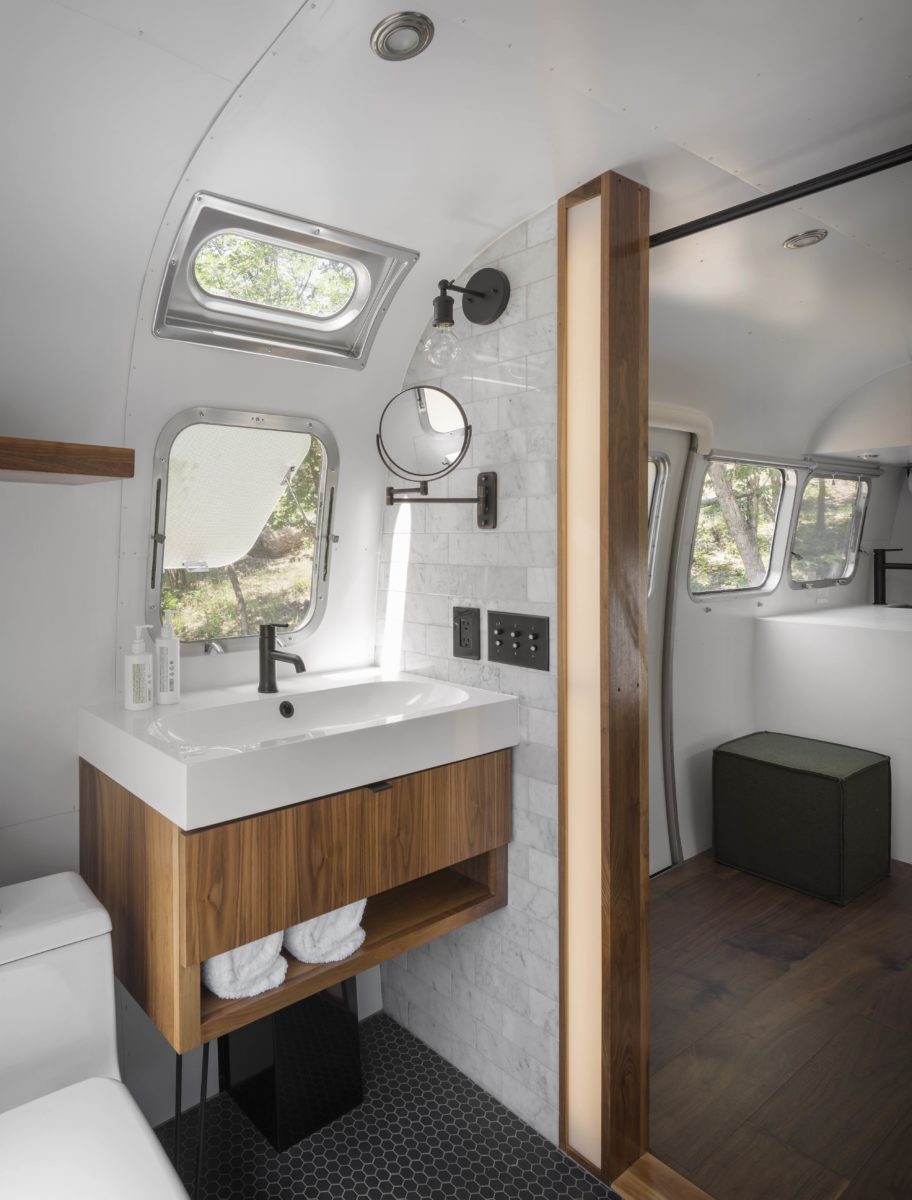 Each bathroom is compact but stylish. 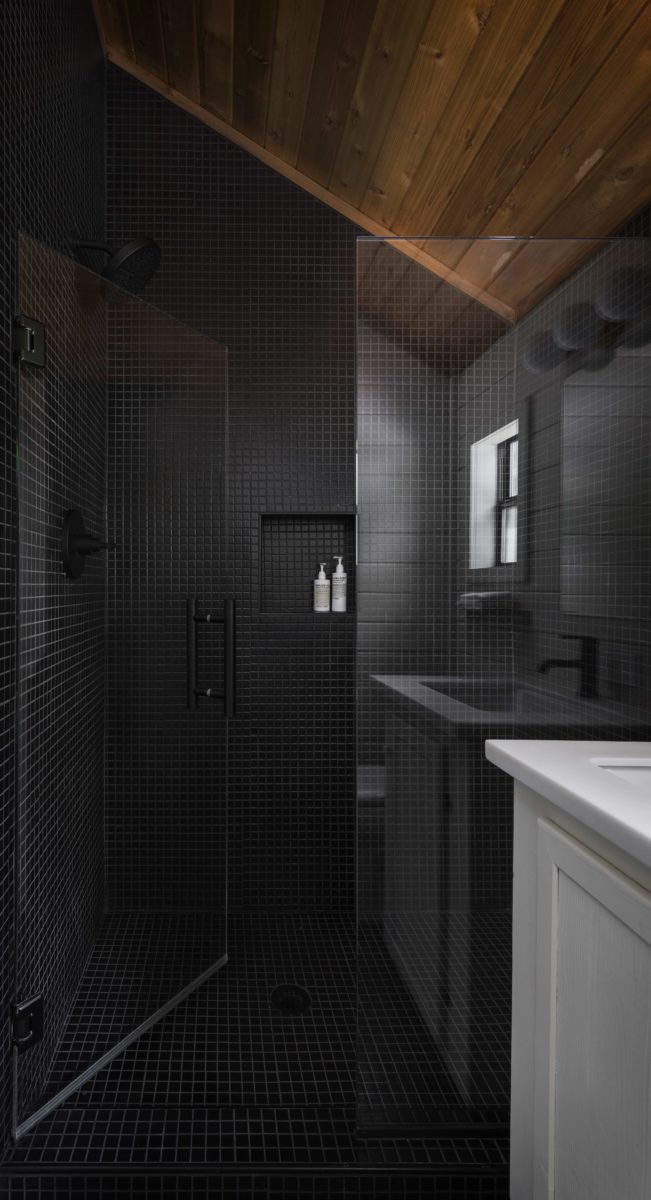 A walk-in shower lets guests freshen up after days spent hiking and exploring.

Why it’s worth the trip:
Location, location, location. With only a few hotels in Yosemite National Park, sleeping outside park limits is the norm. But staying here isn’t anything like checking into a traditional hotel. Staying in AutoCamp’s Airstreams and luxury tents is as fun as it looks.

You’ll like it here if:
You like making new friends around a campfire. Or, you like camping, but not all the work and dirt under your fingernails that typically comes with it.

What to bring:
You’ll be spending most of your days outside, whether on-property or in Yosemite National Park. Sneakers or comfy hiking boots, and a lightweight backpack to carry sunscreen and a water bottle should be on the top of the list. AutoCamp sells a small selection of provisions and alcohol, but if you’re planning on cooking over a fire, come prepared with dinner and s’mores fixings. The closest grocery store is about a 10-minute drive in Mariposa. 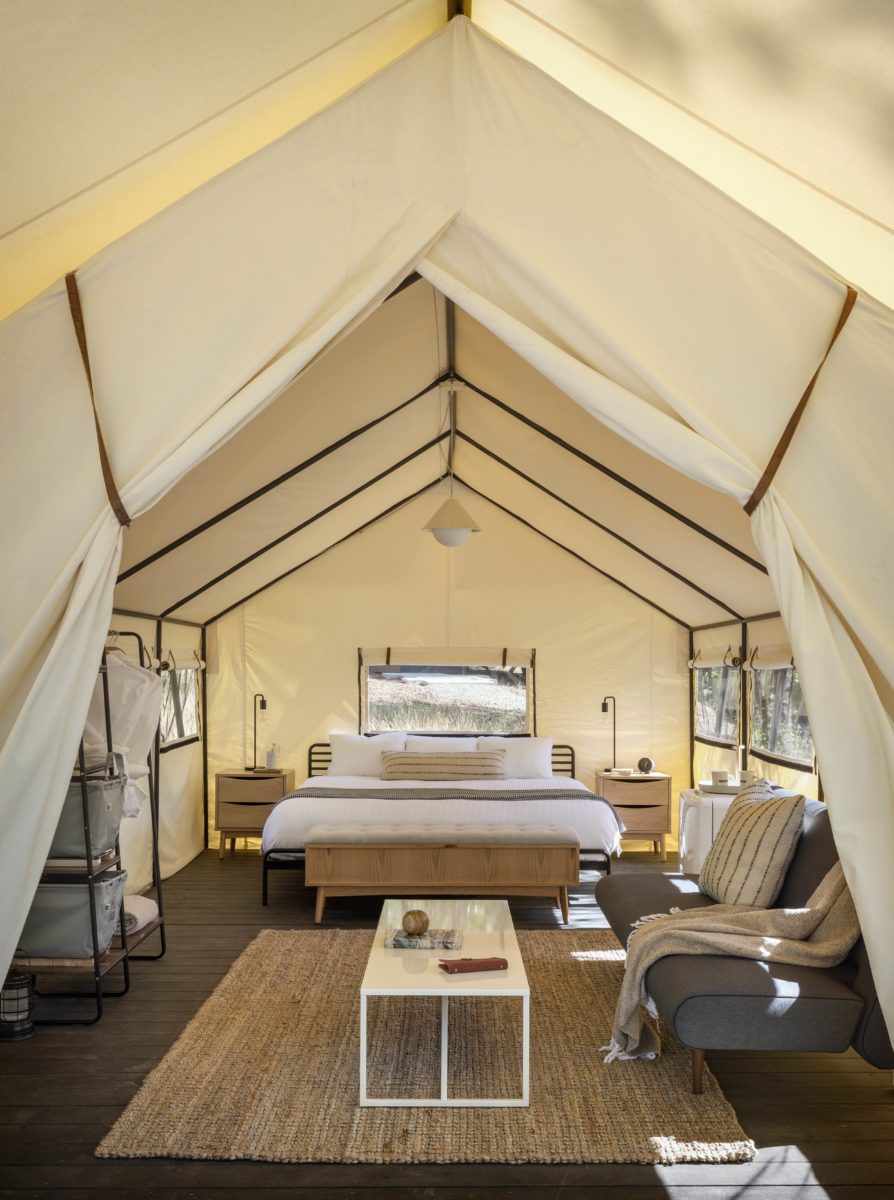 Campers can also rent a tent to sit alongside their Airstream. 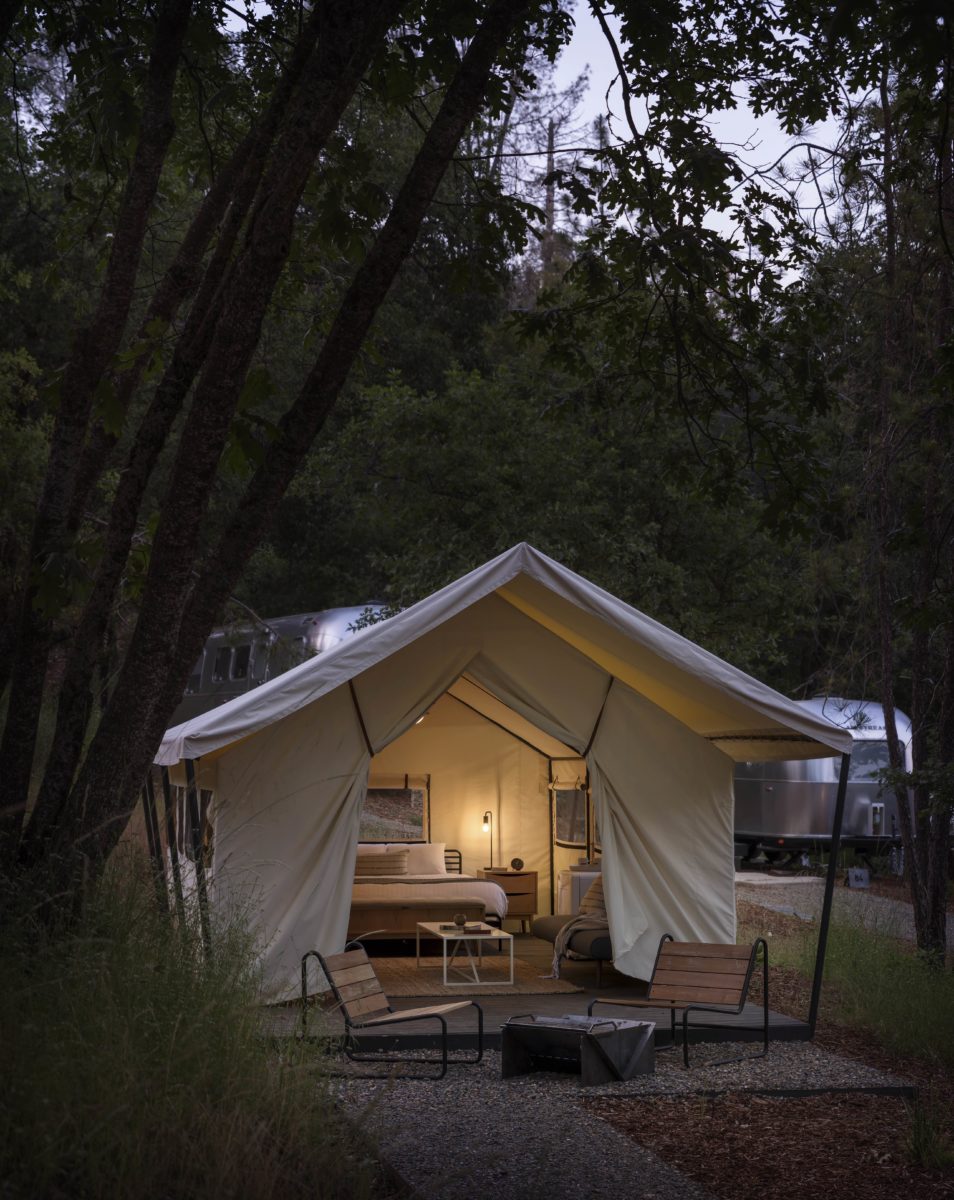 Together, the trailer and tent create a luxury basecamp. 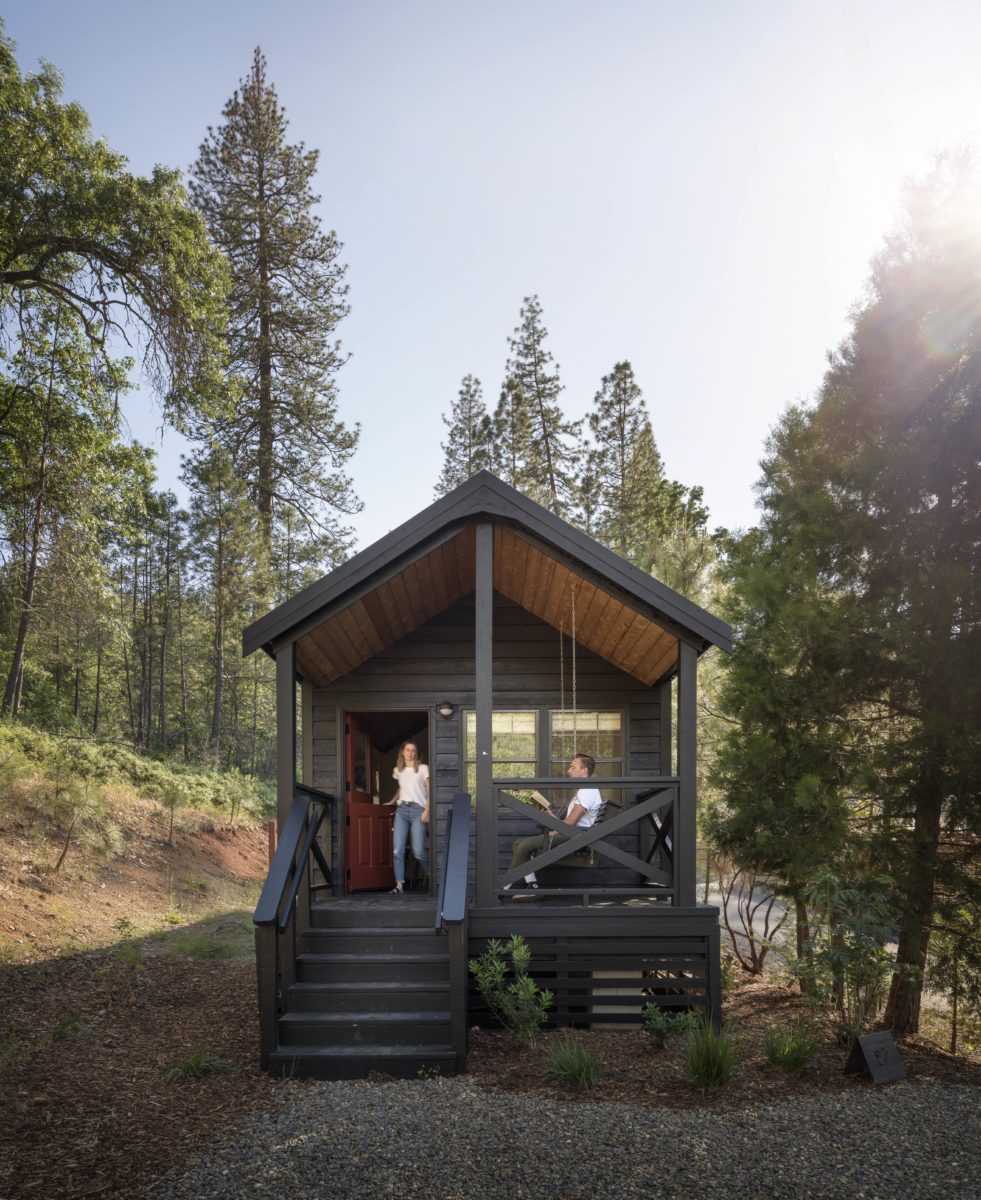 There are also upscale cabins available on site. 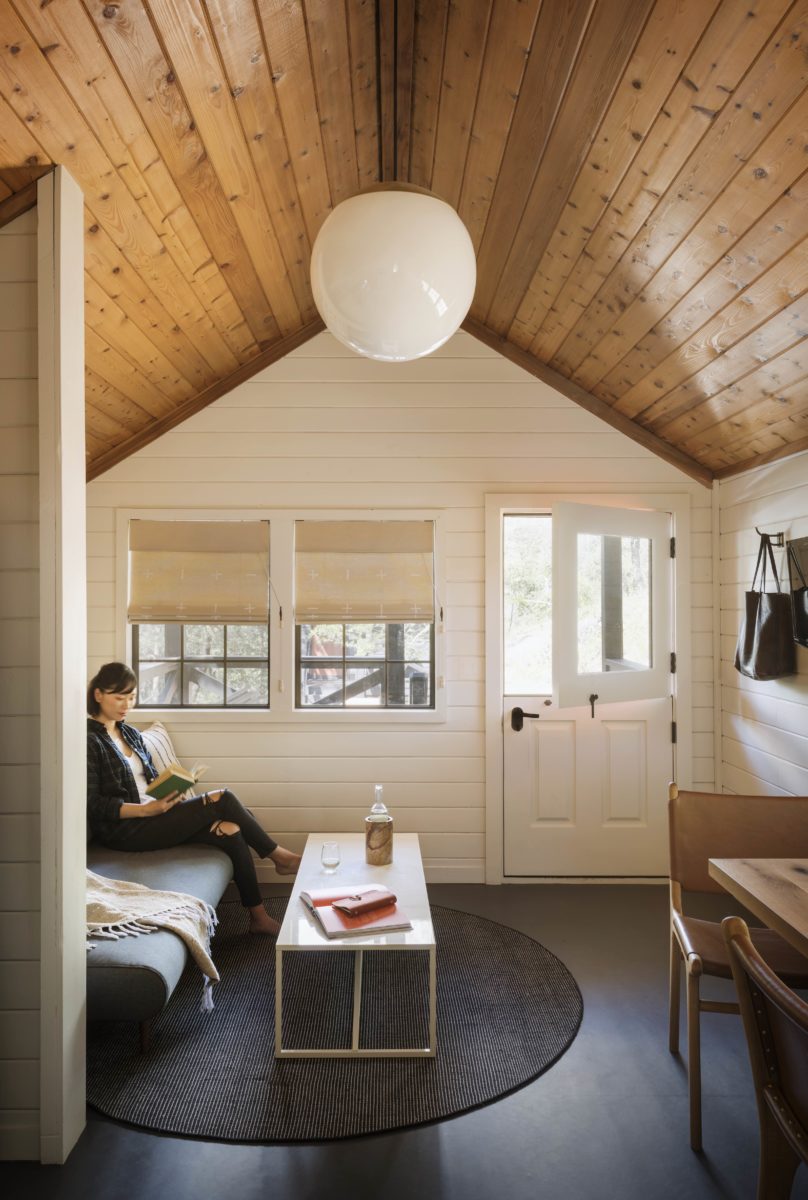 The living room of an Autocamp cabin. 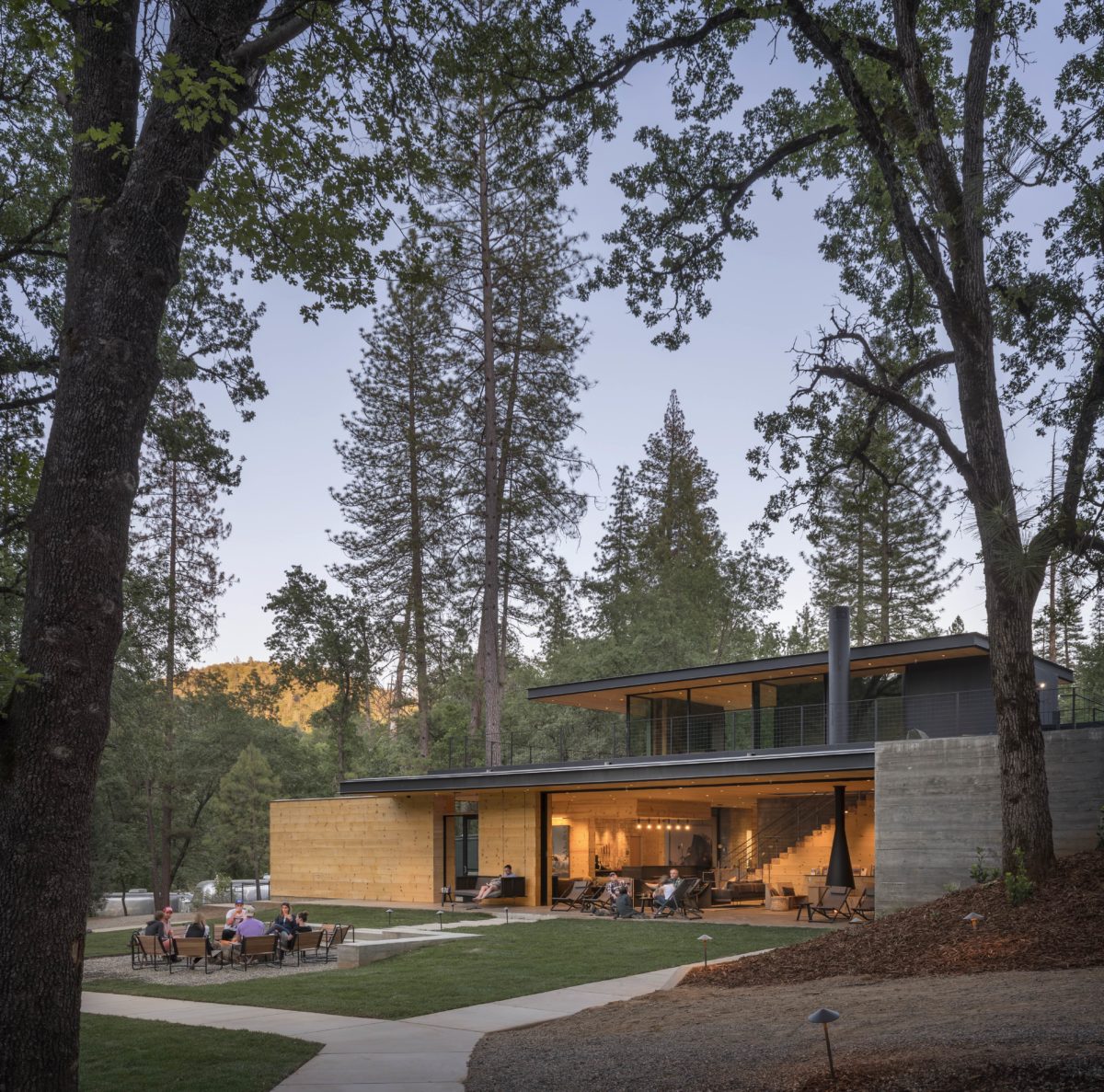 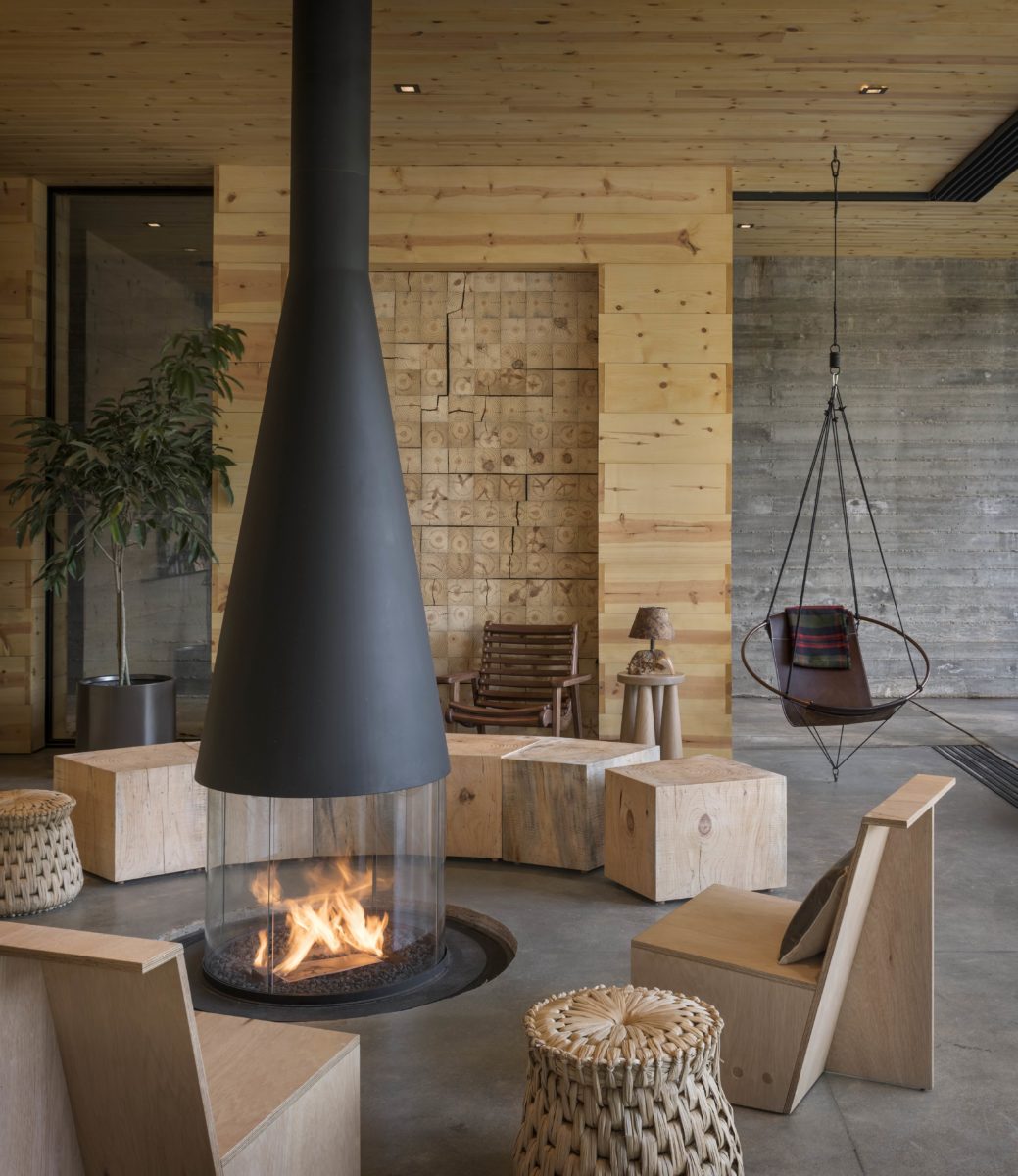 There are plenty of chances to get cozy around a fire.

Pro tip:
No one likes getting up early on vacation, but if you can make it to Yosemite Valley before 8 a.m., the difference in the size of the crowds is well worth setting an alarm.

While you’re in the area:
Yosemite National Park! Summer favorites include the Lower Yosemite Fall and the often rainbow-saturated Mist Trail. It’s about an hour’s drive from the valley, but Glacier Point delivers panoramic views that include the likes of Half Dome, Vernal, and Nevada Falls.

During winter, the Yosemite Ski & Snowboard Area is perfect for those who like playing in the snow, but don’t like the crowds powder can attract.

If you’ve got a sweet tooth, the boysenberry pie has been on the menu at the Majestic Yosemite Hotel (formerly the Ahwahnee) for more than 50 years.

Built in 1854, the Mariposa County Courthouse is the oldest continuously operating courthouse west of the Rockies. When court isn’t in session, visitors are welcome to step in and step back in time.