How to Spend a Long Weekend in Austin, Texas

The Austin skyline has undergone rapid changes over the years—the city still has a lot of heart.
IndexAnnie Werner

This week, Here editors share guides to the places they grew up. See Digital Editor Annie Werner’s guide to Austin below—including where to stay, what to eat, where to go out, and what to do in the capitol of Texas.

Growing up, I thought my hometown of San Marcos was the pits, Austin being the closest thing to a metropolitan experience just 35 minutes north. Once I got a car, I drove up every weekend, wandering from shop to shop on The Drag near UT Austin and going to pop-punk shows at The Parish on 6th Street.

I’ve come to appreciate both my hometown and Austin in different ways now. Many say that for better and worse Austin has exploded in ways they couldn’t possibly imagine, but truthfully, its potential was poised there all along: delicious food around every corner, excellent nightlife, incredible outdoor spaces, and a funky Southwest-retro aesthetic. 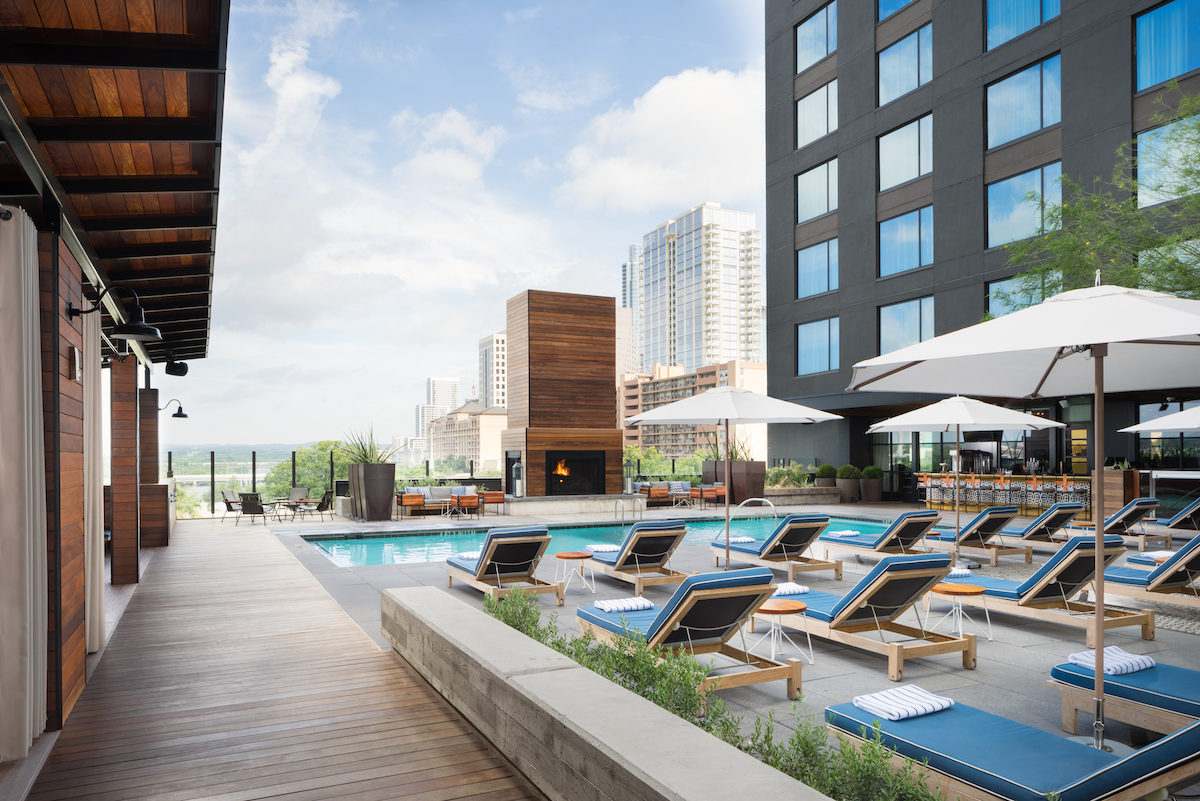 The pool at Austin's Hotel Van Zandt comes with a fireplace and sweeping views of the greenbelt.

I come back three to four times a year now and my relationship to Austin straddles an interesting dynamic—one that claims nostalgia for the old Slacker Austin and scorns the “Brooklyn Effect” while at the same time remaining open-hearted to interesting evolutions in the city’s culinary, nightlife, and creative landscape.

Although the city’s explosive growth has made way for endless streams of bachelor/bachelorette parties and California transplants, there’s still so much left of the original Austin to explore—as well as many new places that have honored the city’s weirdo spirit.

Below, my guide to Austin extols the values of both kinds of places—places old and new that just feel so Austin to me, from long-established vegan-friendly diners to the bars are actually worth your time on Rainey Street (which feels like it practically dropped from the sky eight years ago). Many other cities claim to be the “next Austin,” but the original is still the best of the best. 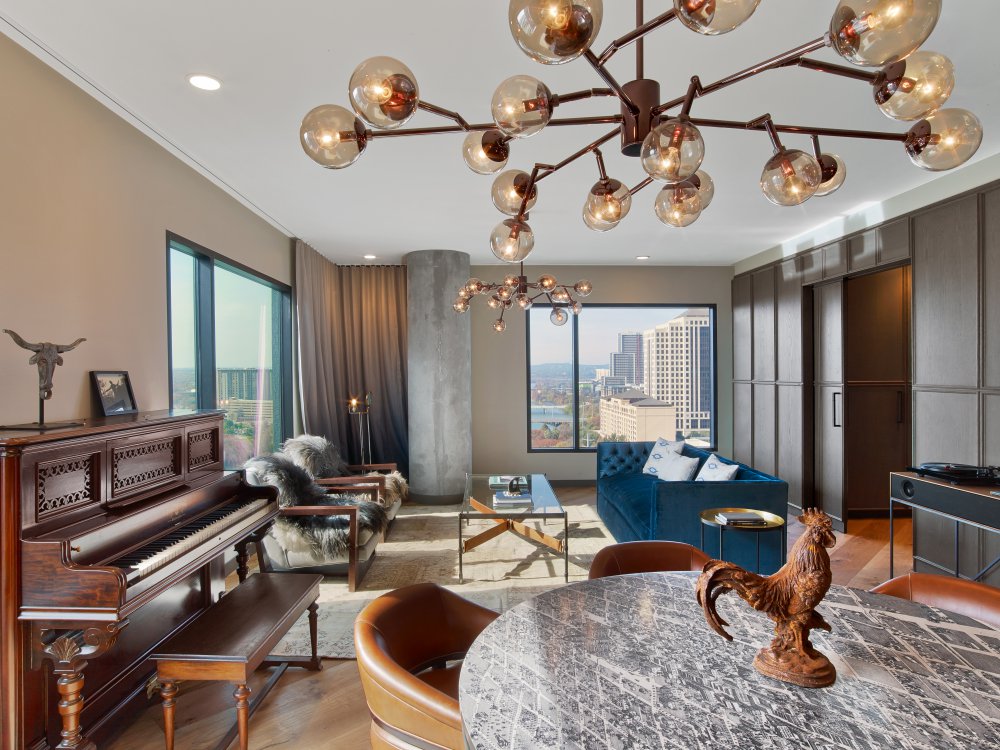 Where to Stay in Austin

Situated just off the action on Rainey Street, Hotel Van Zandt truly pulses to Austin’s live music beat. Geraldine’s, the hotel’s own live music venue and restaurant, is also host to one of the best brunches in Austin. The downstairs lobby and lounge is buzzing, and all interiors play homage to the hotel’s namesake, the famous country rock music musician Townes Van Zandt. Soak in the pool with one of their bartender’s expert cocktails and take in a view of the beautiful Texas green belt.

Definitely the chicest edition to Austin’s downtown hotel boom, The Line, currently one of three properties by the Sydell Group, designs each hotel according to the unique personality of its neighborhood. In what was formerly a Radisson, The Line Austin is now a culturally active hotel space, with almost daily community events catering to the city’s creative arts scene. Rooms are comfortable with thoughtful design touches, and stays come with complimentary breakfast.

This staple of Austin’s lively South Congress district is and oldie but goodie—one of the first notable boutique properties in the city, the design-centric hotel has maintained its status as one of the best and most-true-to-the-Austin-spirit hotels around. The leafy courtyard is a great place to relax right in the middle of one of the best shopping, dining, and nightlife areas around. 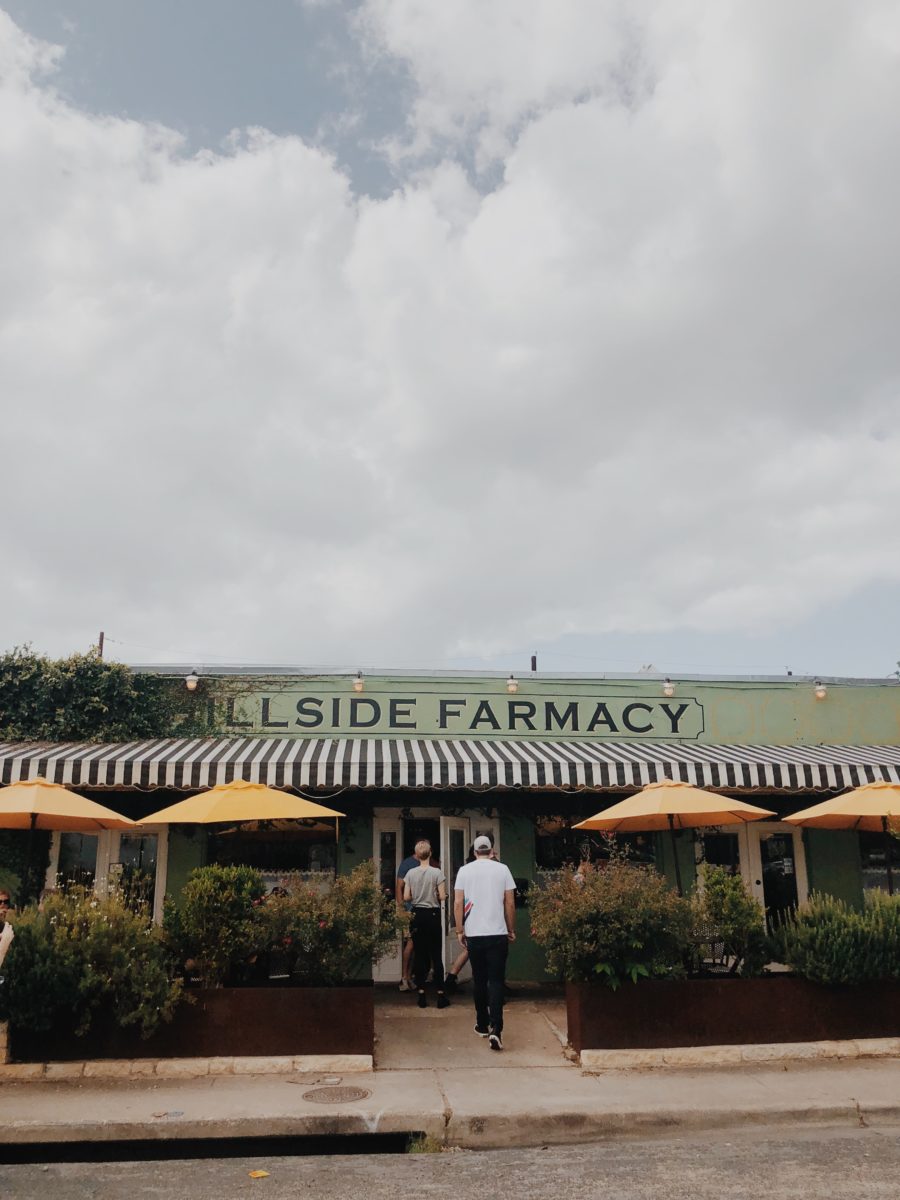 This repurposed former pharmacy offers one of the best lunch menus in Austin. 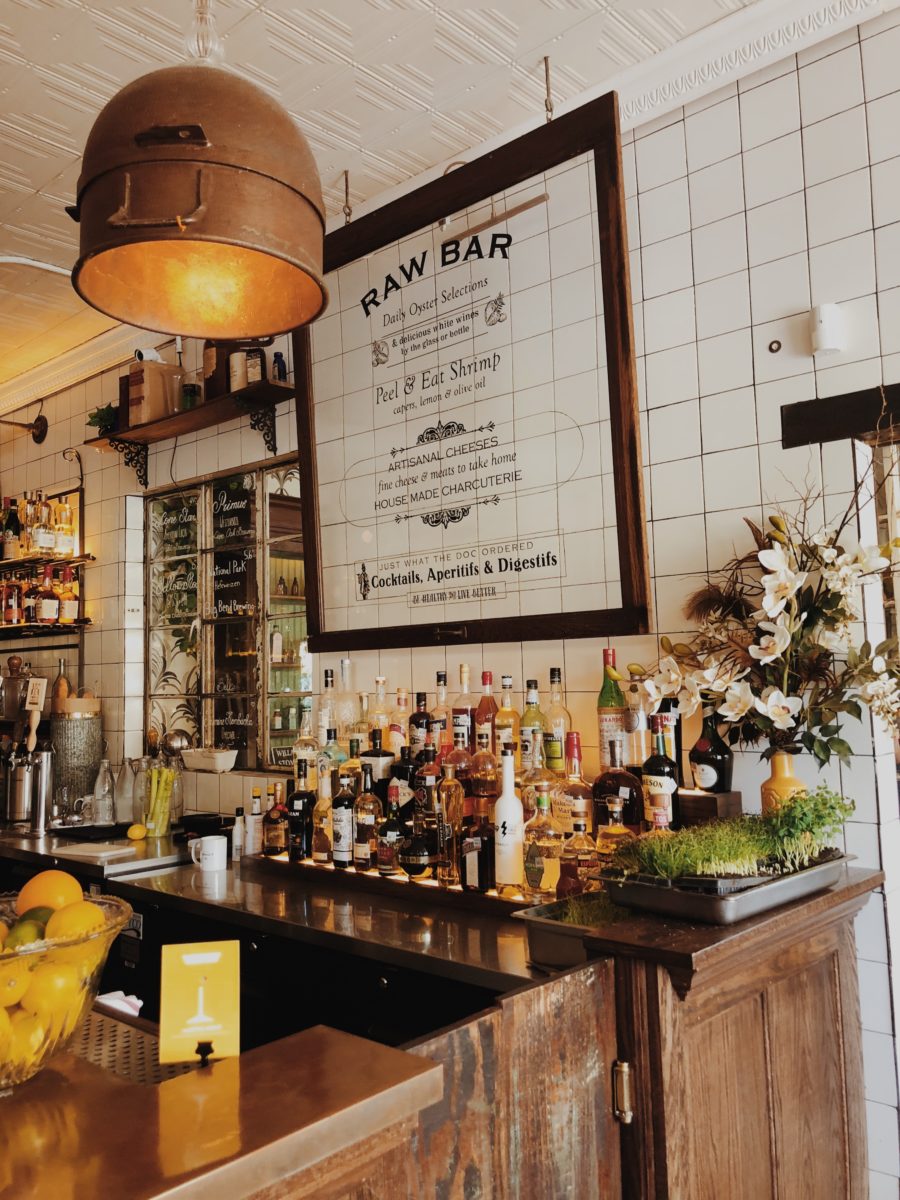 Inside Hillside Farmacy in Austin, Texas.

Where to Eat in Austin

Housed in a historic East Austin former pharmacy, the beautifully restored space offers a well-curated menu of eclectic American fare with a Texas twist (e.g. the Tex-Strami sandwich comes with House made pastrami, pickled red and green cabbage, provolone cheese, and paprika aioli). The cocktail and wine menu is longer than the food menu, which just proves they have their priorities in the right place.

A South Austin gem, this delicious and inventive vegetarian and vegan-friendly joint is Austin through and through. With hearty and inventive dishes inspired by Tex Mex, BBQ, and other local flavors, even carnivores won’t go hungry here. Rotating art shows by local artists round out the bohemian vibe of this place. Perfect for lunch, brunch, or casual dinner.

One of the best restaurants for large groups in Austin, the vast and rustic space surrounded by lush green space serves up some of the freshest Southern cuisine in the city. Go here for chicken-fried steak (that’s steak fried like chicken) and unique margaritas. Happy hour from 5-7 p.m. includes $5 appetizers and half-off cocktails. Browse their shop full of locally-crafted goods after you’ve filled up on pimento cheese dip. 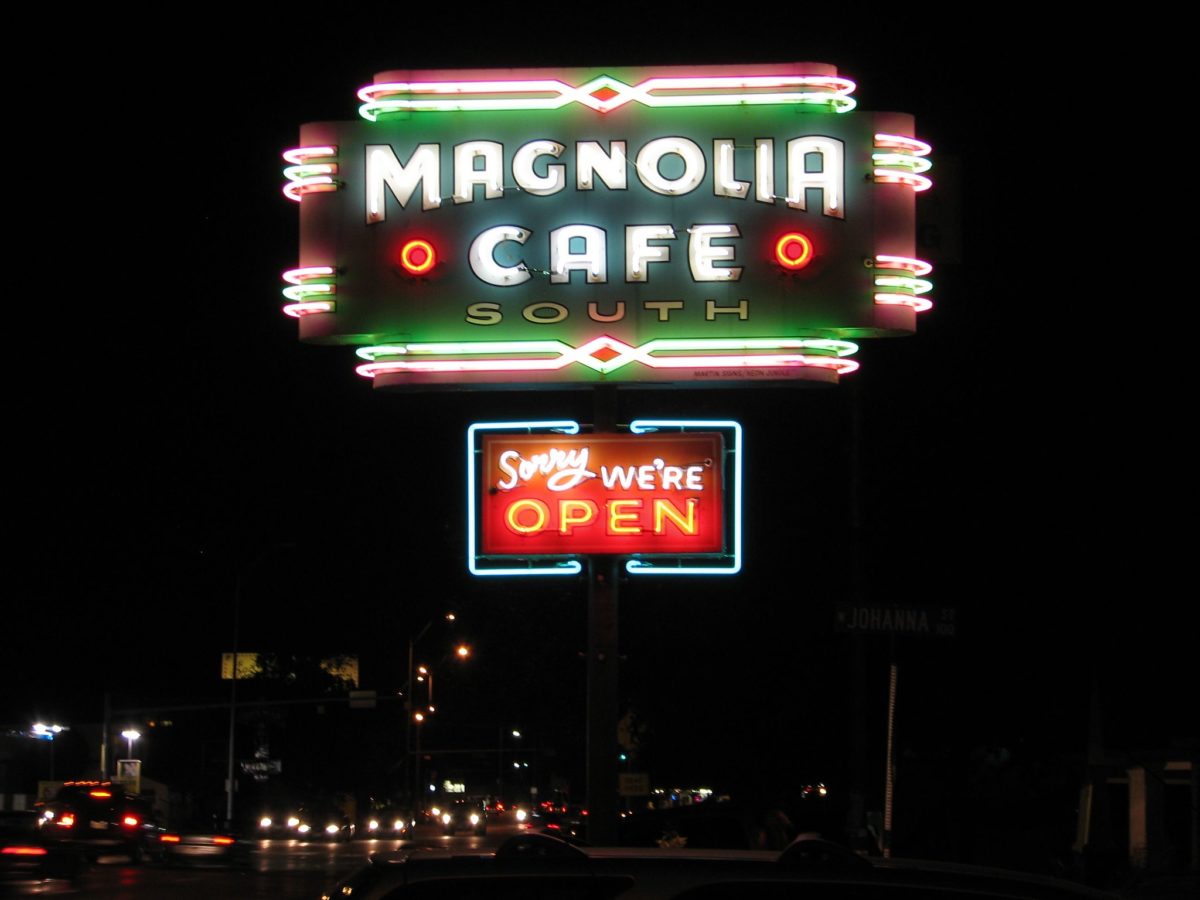 It was only a matter of time before the BBQ-loving cultures of Japan and Texas came together, and we’re lucky it came together so beautifully in the form of Kemuri Tatsu-ya. A casual izakaya spot that’s only fault is making it so difficult to choose from all the exciting inventions on the menu (chili-cheese takoyaki?! Tokyo street corn?! Smoked fish collar with yuzu salt?!). The cocktail menu matches the inventiveness of the food. It’s a one-of-a-kind Austin establishment.

I truly don’t believe you can leave Austin without having some Magnolia. What began as an omelette-only diner in 1979, Magnolia is an original Austin staple that’s helped define the city’s funky food culture. Many have tried to imitate their Mag Mud queso (which they really should trademark) and the friendly atmosphere of both locations will have you coming back for seconds.

[You may have noticed there’s no Tex Mex on this list—that’s because the best is 35 minutes south in San Marcos.] 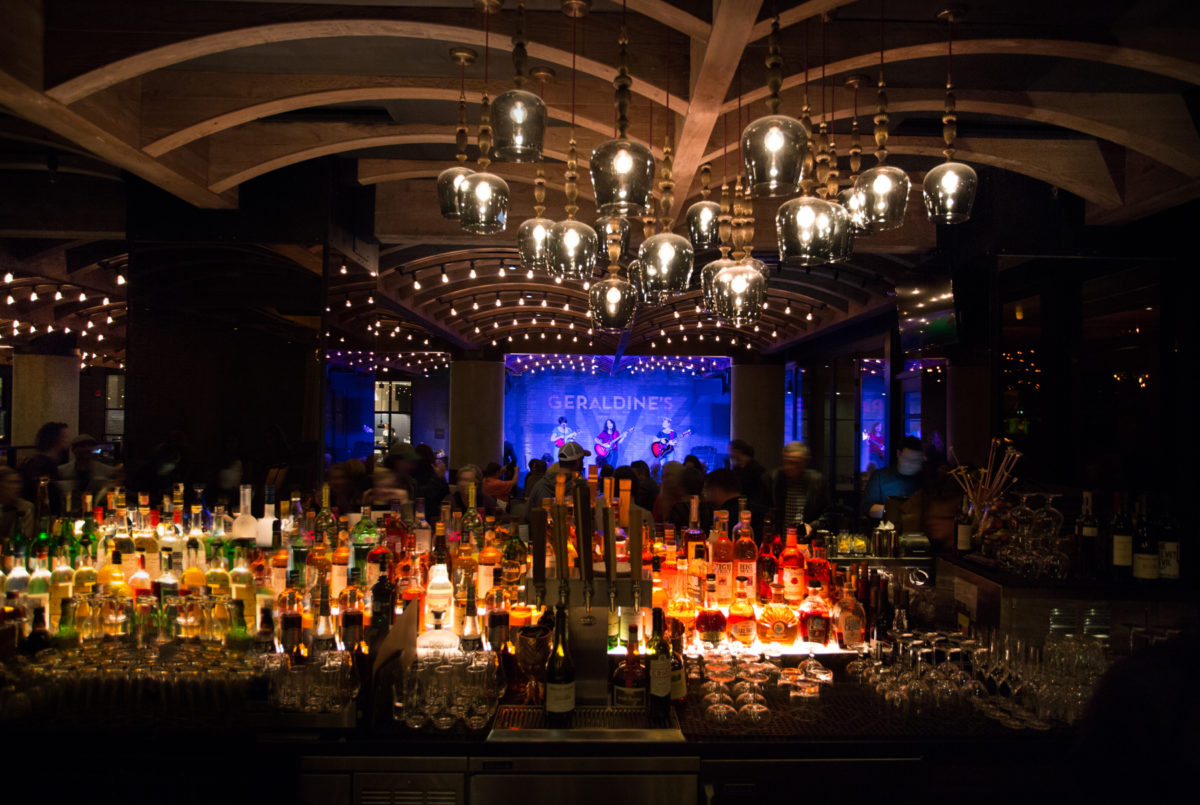 This Rainey Street lounge has some of the best live music in Austin—it’s the kind of place where you probably won’t know the acts on the roster, but the mix of jazz, blues, and bluegrass groups is sure to be high quality.

I like to think of Clive Bar as the mother hen of actually good bars on Rainey Street. One of the first bars to open up in the newly-minted nightlife district, the space stays true to the homey vibe of the refurbished bungalows, but takes it one step further with a secret mezcaleria in a hut out back (which, if you get hooked on the smokey spirit like the rest of Austin has, try the sophisticated La Holly cantina on the eastside or the upstairs bar at Whisler’s). 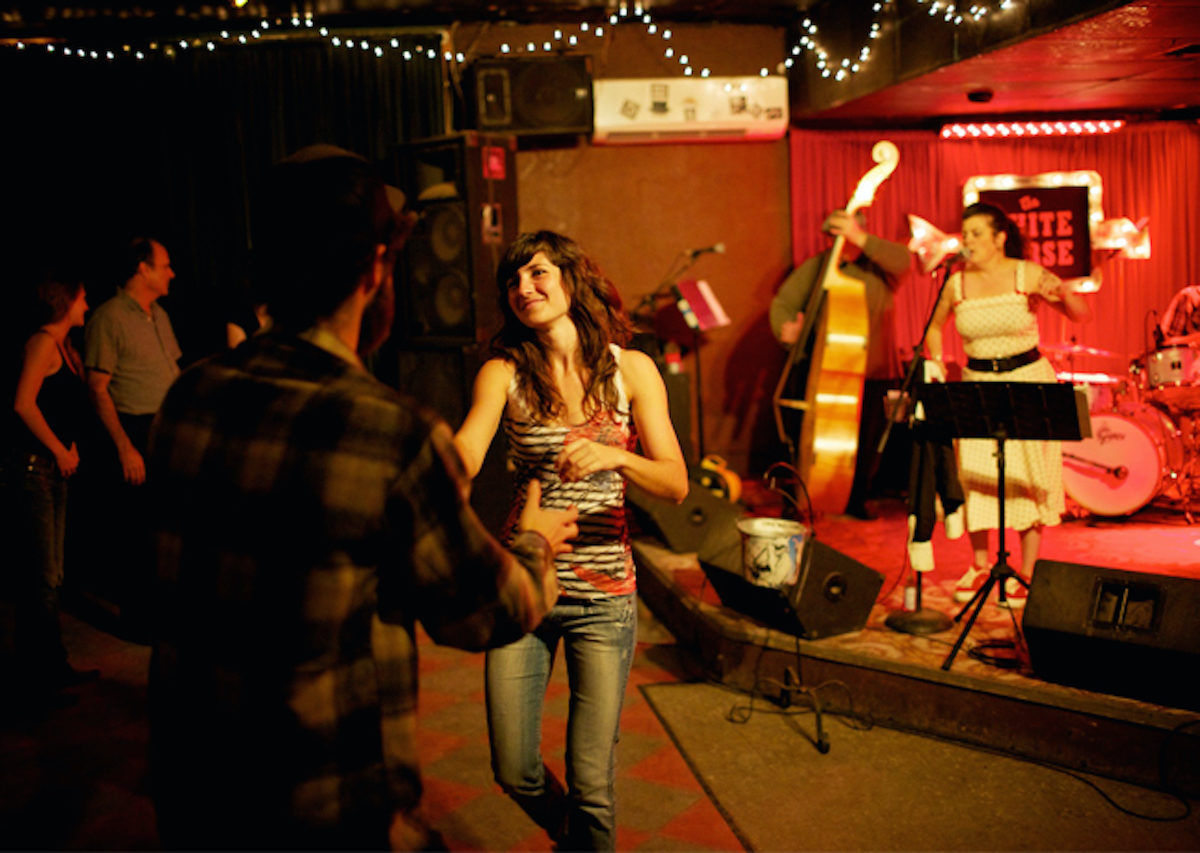 The White Horse is one of the best honky tonks is Austin.

This is the spot to go two-stepping in East Austin (ladies, that’s one step right, two left, he leads). Twirl or be twirled at this true honky tonk with live music, cheap drinks, and Texas-friendly vibe.

I’m not going to say much about this perfect northside dive other than that it’s a little out of the way, but if you have some time to kill on a Sunday, they have a bingo game that’s unlike any other in the world. It involves a live chicken (unharmed!) and some mess, and it’s one of the most spectacular things you will ever see.

This reservations-only speakeasy beneath the renowned Buenos Aires Café is the perfect place to begin a night of bar hopping in East Austin. The expert menu educates the imbibing public on South America’s bitter-forward cocktail spirits like amargos and fernets, incorporating their inventions like house-made malbec syrup. Enjoy some tapas from upstairs to truly seal the deal. 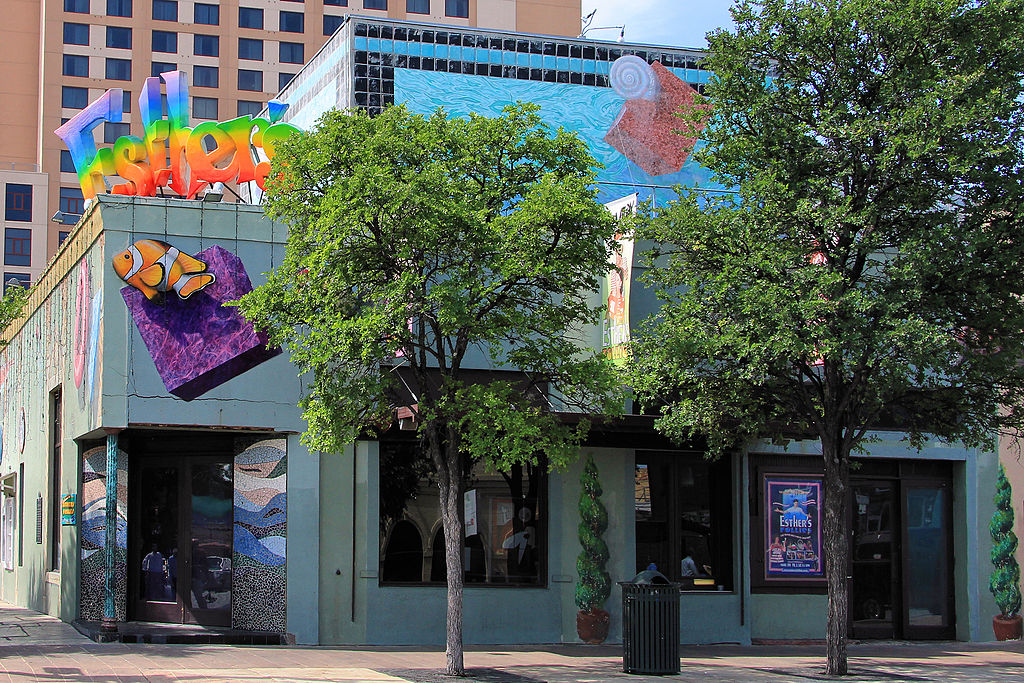 Be prepared to crack up at Esther's Follies. Photo via Wikimedia Commons.

One of the newer kids on the block, this is one of those bartender-beloved bars in East Austin with affordable drinks, outdoor patio space, and a respected food truck. Billing itself as a “daycare for adults,” Latchkey is open 12 p.m. to 2 a.m. every day of the week.

I would tell you to crumple up and throw any guide in the trash that doesn’t include Esther’s Follies. It’s one of the only things that will lure me down to 6th Street proper. Expect hilarious live comedy (sketch and improv) with a uniquely-Austin funky vibe at this long-standing establishment.

[For a full guide on where to see live music in Austin, click here.] 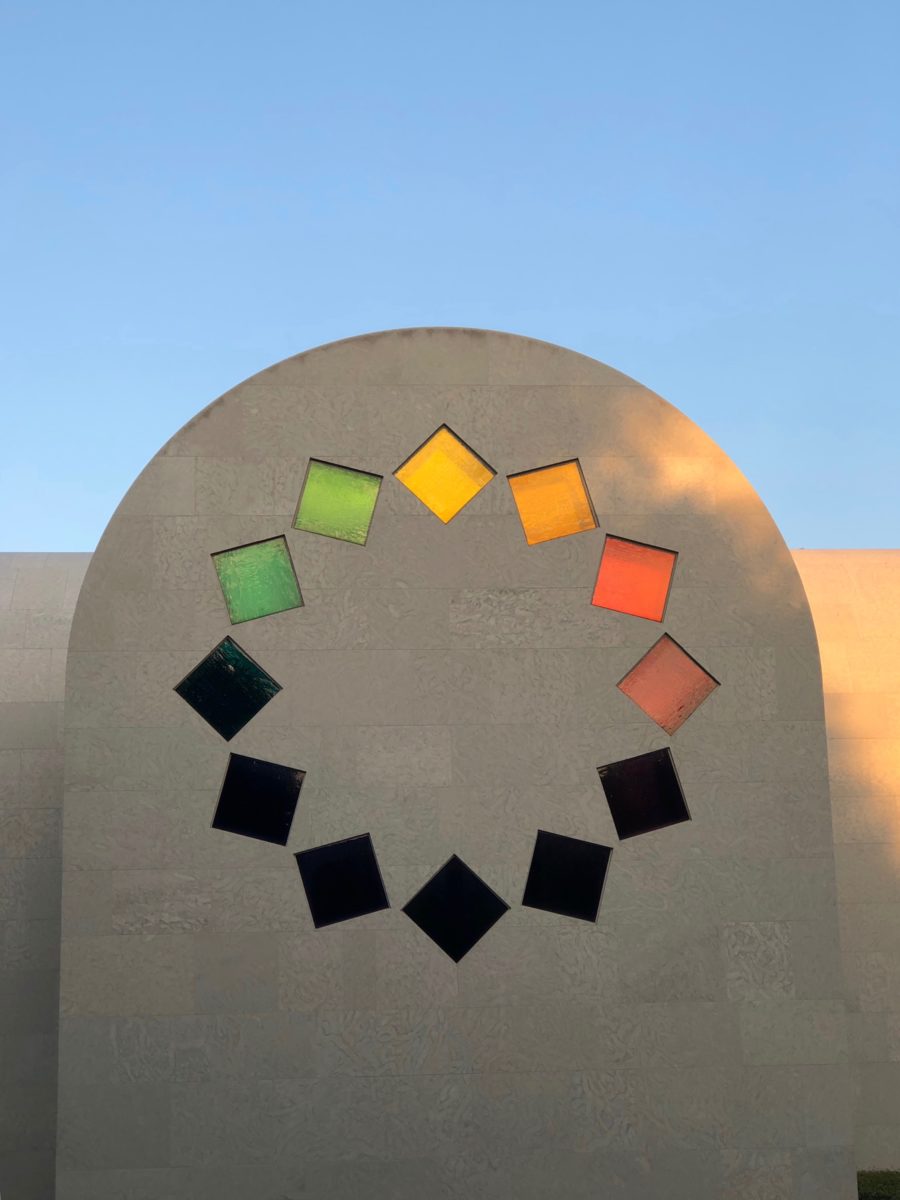 The Ellsworth Kelly installation at The Blanton is one of the city's latest and greatest art destinations.

What to Do in Austin

The University of Texas’s downtown Blanton Museum boasts one of the largest art collections in Central Texas, a comprehensive selection of which includes modern and contemporary Latin American art (a sweet respite from Euro-centric collections throughout the country). The museum offers a regular stream of rotating exhibitions, but the museum most recently made headlines for the completion of artist Ellsworth Kelly’s final site-specific project, a chapel-like structure playing with light and color known simply as ‘Austin.’

A funky little archive, library, and museum, The Harry Ransom Center has an eclectic mix of famous Frida Khalo paintings, colonial-era ephemera, a Gutenberg Bible, and more. The mission of the center is to collect “cultural materials” that “advance understanding of the humanities.” You likely won’t need more than an hour here, but you’ll find some of the most unexpected institutional treasures on the way. 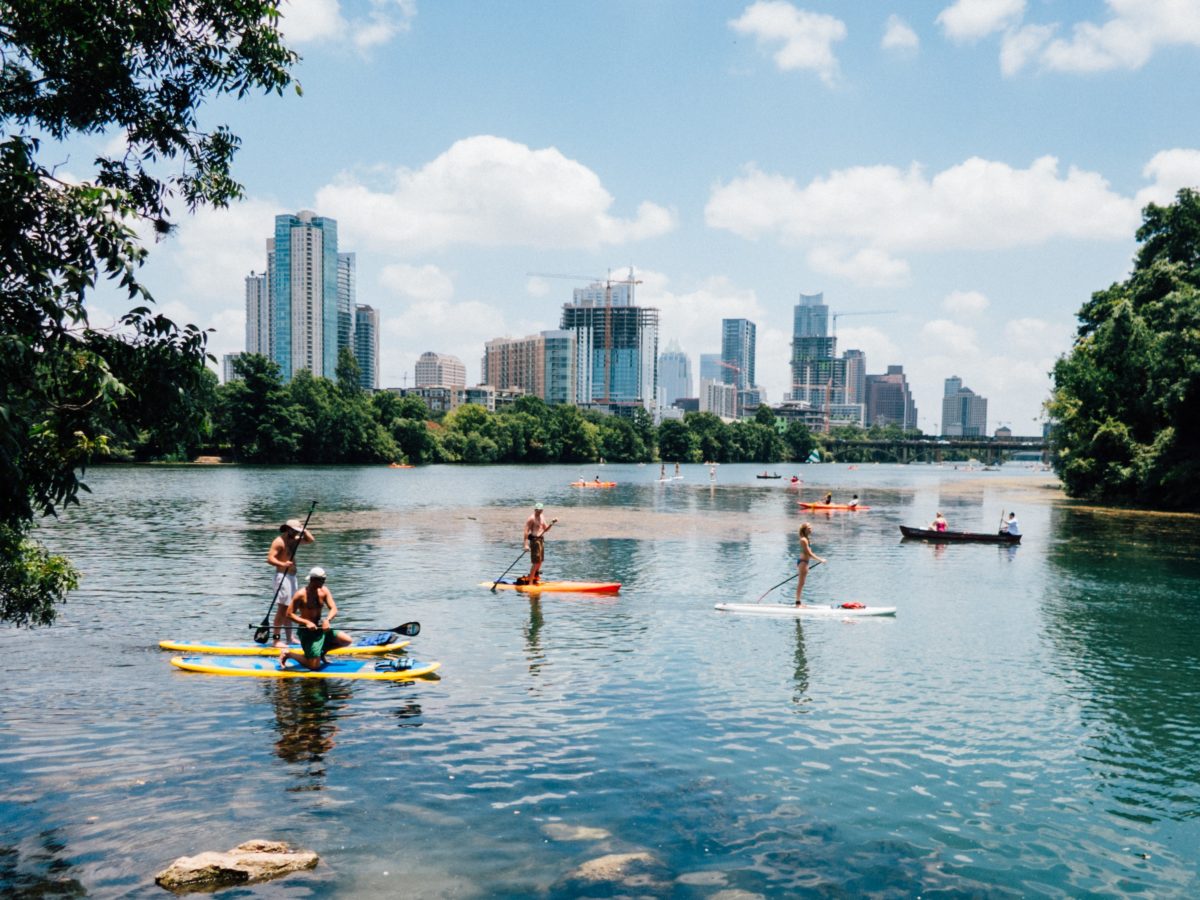 The best way to get a lay of the Austin land is via the Butler Bike Trail along the Colorado River. The 10-mile trail passes by the skylines of East Austin, Downtown, and South Congress, and winds through Zilker Park (home of the famous Barton Springs Pool). Surrounded by lush greenery, it’s one of the best places to get fresh air in a densely populated urban area. Go around dusk to situate yourself in an optimal place for Austin bat colony viewing.

While Barton Springs Pool is practically synonymous with Austin outdoor activities, visitors should also head west on the Colorado River for the perfect microcosm of outdoor Austin culture that is Red Bud Isle. Newly reopened after a disastrous flood, the little island offers kayaking, canoeing, and, most importantly, off-leash dog play. 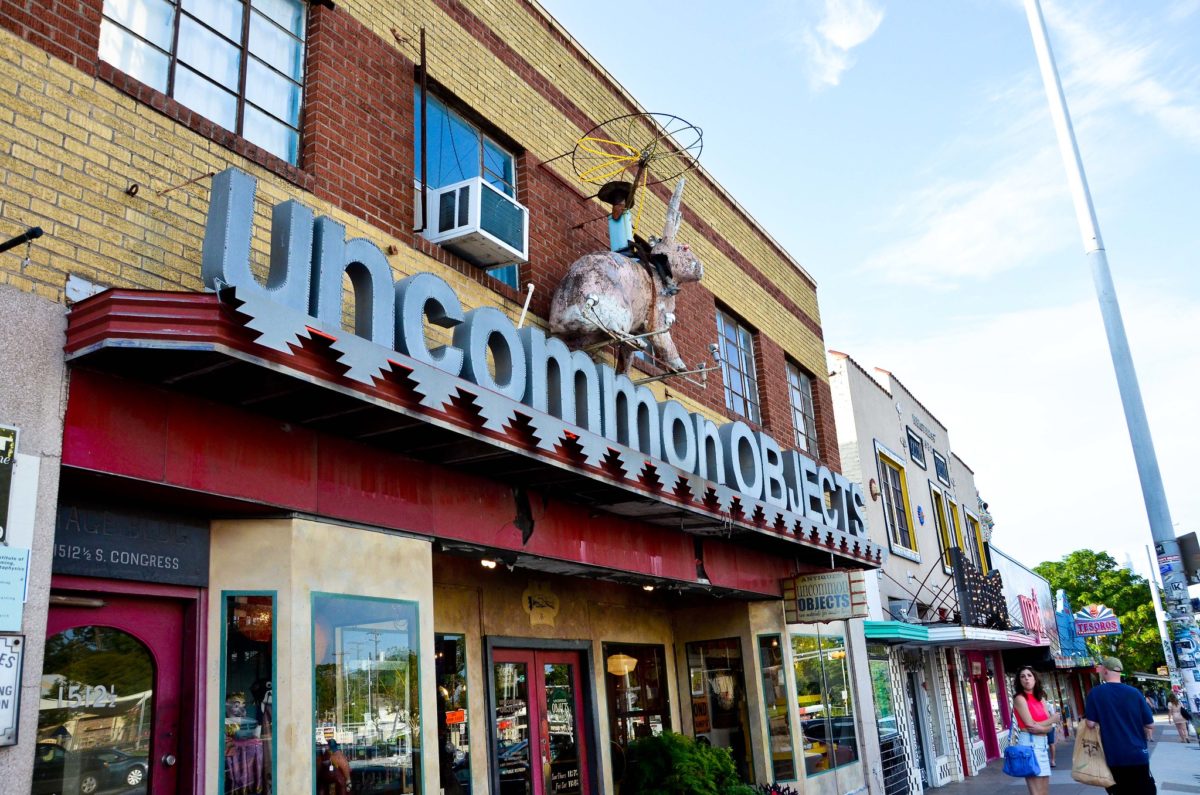 Uncommon Objects has been a staple of Austin's South Congress Avenue since 1991. Photo by Iris SK.

This guide would get too long if I gave every worthy establishment on the South Congress strip it’s own listing, so I’ll name a few: Feather’s Boutique, Prototype Vintage Design, South Congress Cafe, Amy’s Ice Cream, By George, Uncommon Objects, Allen’s Boots, and more. Sweeping views of the capital to supplement your wandering spirit.

That’s it. That’s the recommendation. (There’s some acoustic voodoo that makes it so no one can hear you.)