“Worldschooling” Parents Share Tips to Make the World Your Classroom

Parents who “worldschool” espouse the benefits of taking their children’s lessons on the go. But what exactly does it mean to travel the world with your school-age children, and how can parents get started on their own?

Sure, you’ve heard of homeschooling, but what about worldschooling? The growing trend turns the whole world into your classroom and puts an emphasis on learning through firsthand experiences. It goes far beyond the occasional museum trip or cultural opportunity on a standard family vacation. This new alternative education movement is one that parents and kids are committing to as a full-time lifestyle.

So how does one get into worldschooling? Marlene and Dan Lin, parents who travel the world and live the van life lifestyle with their three kids (and document it all on their Instagram @mali.mish), have been doing it for over eight years.

“The daily hands-on learning made a real impression on them.”

“We started to explore the world with our children before they were of school age. The daily hands-on learning made a real impression on them,” explain the Lins. “When our oldest child (who is 12) was ready for kindergarten, we decided to begin worldschooling instead of enrolling her into the public school system.” They’ve been worldschooling all three of their children ever since.

Lindsey Daigle and her husband, who document their travels on @wanderingdarlings, fell into worldschooling their four children as the natural next step after frequently traveling while their oldest was a baby and toddler.

“When we went to enroll him in a Montessori preschool, we noticed that we’d be taking him out of several weeks that fall to travel. So, we thought to delay enrollment. And then again until we realized that customizing his education based on where we traveled to would be more worthwhile than what he would find in a classroom.” 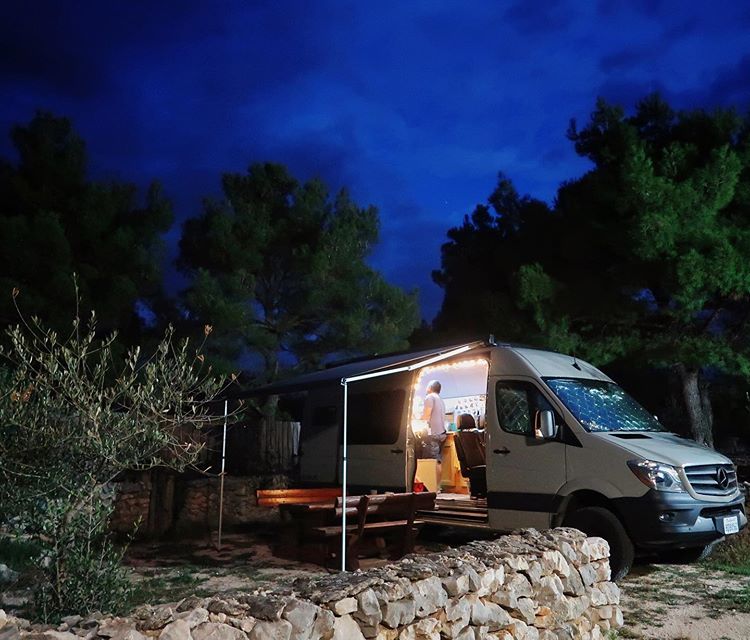 Malene and Dan Lin take their three kids around the world in a large sprinter van. Photo via @mali.mish.

Many families that worldschool travel full time, or at least for a majority of the year. They use a mix of standard, grade-appropriate textbooks and homeschool materials along with learning opportunities and experiences based on their travel locations to give their kids a broader education and deeper understanding of the concepts being presented.

Getting to understand something by actually seeing it rather than just reading about it in a textbook can have a huge impact on kids. The Lins describe an especially poignant learning moment their daughter had:

“At a very young age, our oldest walked onto the Montgomery Bus made famous by Rosa Parks. Not only did she get to learn about Rosa Parks for the first time by walking on to the actual bus, but happened to sit in the exact same seat Rosa Parks refused to give up. All these years later, that memory is still with her, that feeling she got from accidentally sitting in Rosa Parks’ seat. It will always be a part of her.”

Thinking about taking the plunge and worldschooling your kids? Here are some top tips for making the world your learning oyster. 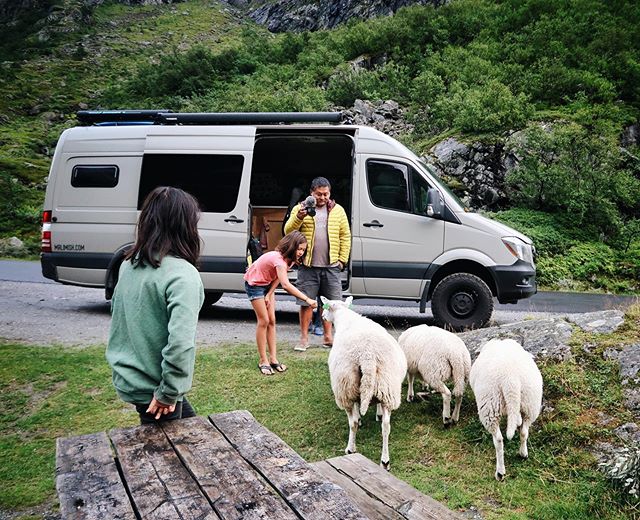 Learning on the go—don't forget to stop and pet the wandering sheep in Strynefjellet, Norway. Photo via @mali.mish.

Tips for Worldschooling Your Own Kids:

“You know your kids better than anyone and care for their education unlike anyone else,” the Lins remind us. One of the best parts of worldschooling is that kids can also help drive the curriculum based on their interests, so you also want to follow their instincts. “Customize your children’s education based on your location and their interests,” say the Lins. “Are they interested in ancient history? Take them to see Athens. Are they interested in the arts? Take them to the Louvre. And when you start seeing their eyes light up and questions pouring from their minds, take them to see even more.” 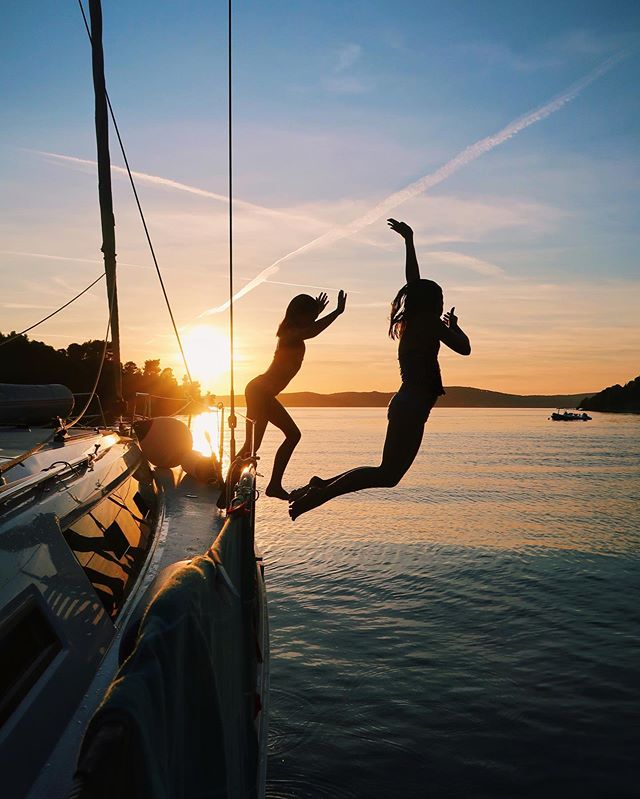 Do Prep Work Before You Travel, Not Just When You’re There

Daigle encourages teaching kids some of the history and culture of your next stop before you arrive. She suggests reading with them about the history of the place or people with children’s non-fiction books or studying a particular artist before going to see their works at a museum.

“If children arrive someplace and they feel like they ‘know’ a little bit already, it helps them to appreciate what they’re seeing and makes them excited to add new facts to go along with what they’ve already learned,” Daigle explains. “It can be as simple as studying a specific animal you might see in the wild or a historical figure or even a famous literary character. Connecting the dots around the world to people’s stories helps children understand the differences in culture, but the similarities in the human heart.” 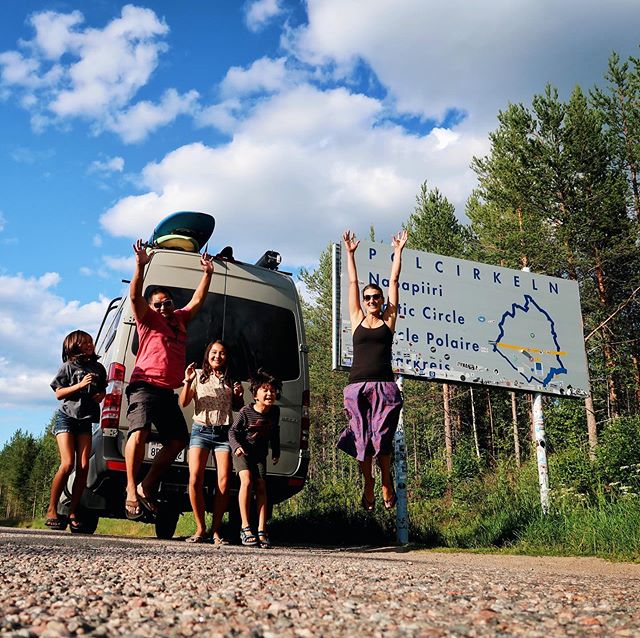 Camera timers are a god send for remote traveling families. Photo via @

Extracurriculars Can Be Key

A frequent question many worldschoolers get is how they make sure their kids get plenty of social time with other peers in their age group. The Lins are quick to point out that they think consistently being around people of all ages has actually helped their kids. “They don’t discriminate who they should or shouldn’t interact with based on their grade level,” they explain. “They gained the ability to make friends and hold conversations with everyone from small children to adults.”

Still, it can be important to make sure your kids have plenty of time with other kids. Daigle recommends non-school activates as a great way for kids to get more interaction. “We rotate the kids through activities seasonally: sports, dance, or art classes. All with children their ages. Plus, playdates with other families who have children their ages.” 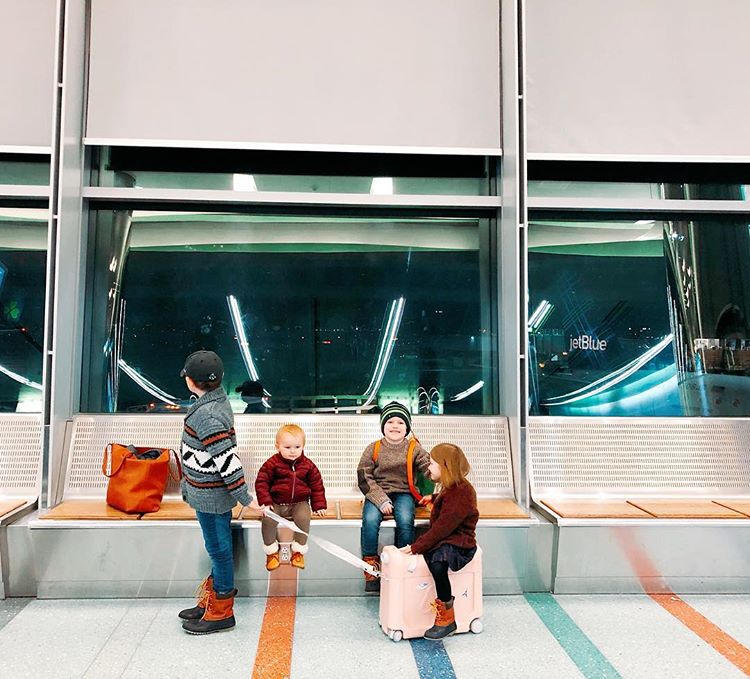 With worldschooling, it's as much about the journey as it is the destination. Photo via @wanderingdarlings.

While worldschooling can sound like one big amazing adventure, there are some negatives that come along with it that need to be considered before jumping in head first. “One of the downsides of worldschooling is being away from family and friends. Sometimes the kids will miss seeing their grandparents,” say the Lins.

Deigel also says it can be tough being scrutinized over the education method. It can be scary to be questioned about whether your child is where they should be. “The experiences they’re being given are shaping them into adults that will have broad ideas about the world and all of the good in it. But reminding myself of that is something I always have to do every once in awhile.”