The 8 Best Places to Visit in Uzbekistan

A travel guide to Uzbekistan, including where to stay and what to do on your next trip.

Many worlds coalesce in Uzbekistan; its tiered history is stitched together with Zoroastrian, Muslim, Jewish, Christian, Buddhist, Greek, and Communist influences. It is the heart of the fabled Silk Road, its camel trails threading together countries as far apart as Greece and China. It is home to some of the world’s most towering intellects: Avicenna, al-Khwarizmi, al-Biruni. Here, you find the crescent dunes of the Kyzyl Kum desert. The fissured, crumbling fortresses of the great Sassanian and Achaemenian dynasties; yawning markets lush with autumn fruit; silk-smooth roads spangled with choikhanas, or traditional tea shops.

But Uzbekistan is also a vodka-swigging Muslim nation with a Soviet Communist veneer that is now peeling off. The tales it tells are vast and varied. The itinerary below is only nibbling at the edges of a glorious country. 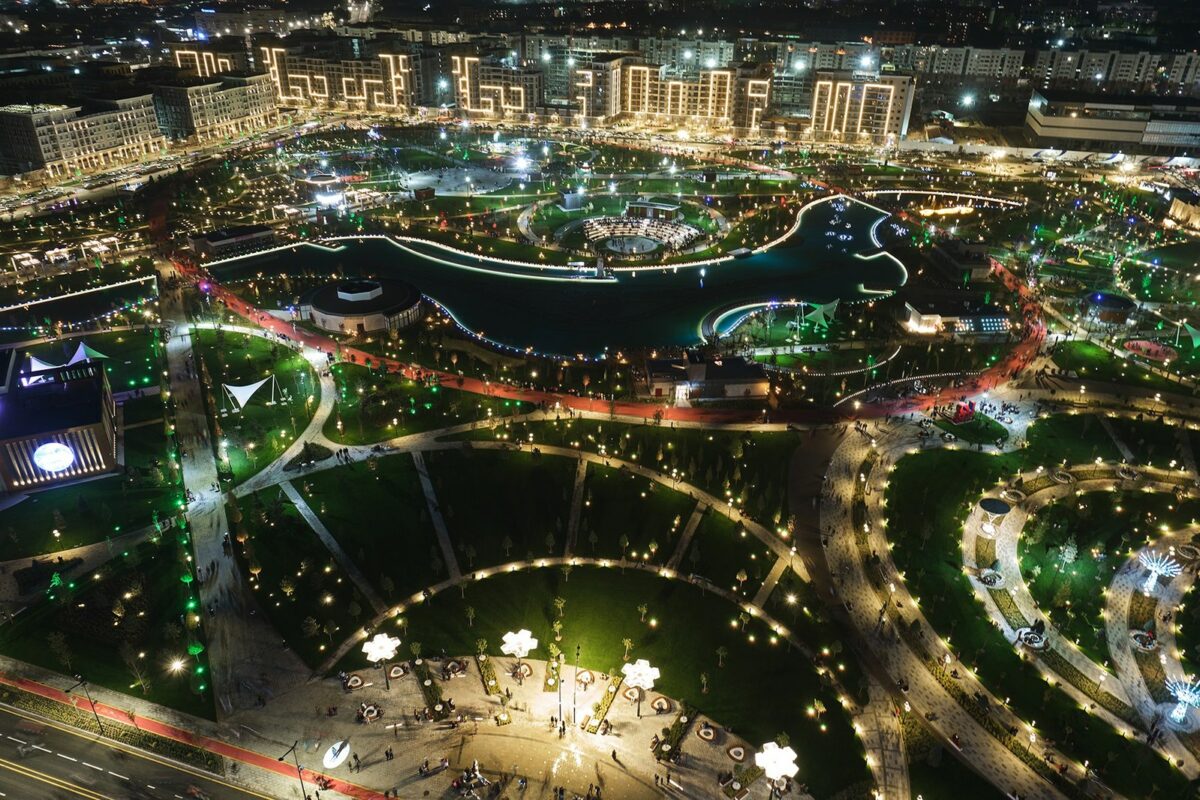 In modern, trafficked Tashkent, you’ll find glimmers of an older life: the cavernous enormity of Chorshu Bazaar selling everything from horse trotters to apricots; the Russian Orthodox church; the most ancient Quran in existence; and scattered fragments of ancient Zoroastrian structures such as Ming O’Rik, a sandy fortress hidden down a quiet avenue off a manic main road.

Its shadow side holds the relics of Russian colonization—stocky Brutalist statuary and buildings such as Hotel Uzbekistan; majestic metro stations, each limned by exquisite Russian murals and chandeliers; the Opera House with its ornamental fountain. There is also the freshly-renamed Amir Timur Square, with its statue of the conqueror triumphant astride his stallion (the statue of Marx has long since been toppled).

For a boilerplate hotel experience, complete with all the usual mod cons, try the Hyatt Regency in Tashkent; it’s a brisk, 10-minute walk to the city’s iconic Amir Timur monument.

The blocky geometry of Soviet modernism is congealed into Tashkent’s iconic Hotel Uzbekistan; the hotel is now a tad tatty, but it’s worth the inconvenience for a night in the midst of living history.

A cavernous room clattering with guests, the Plov Center only serves one type of plov, with rice, astir with raisins, yellow carrots, and serried slices of sheep. 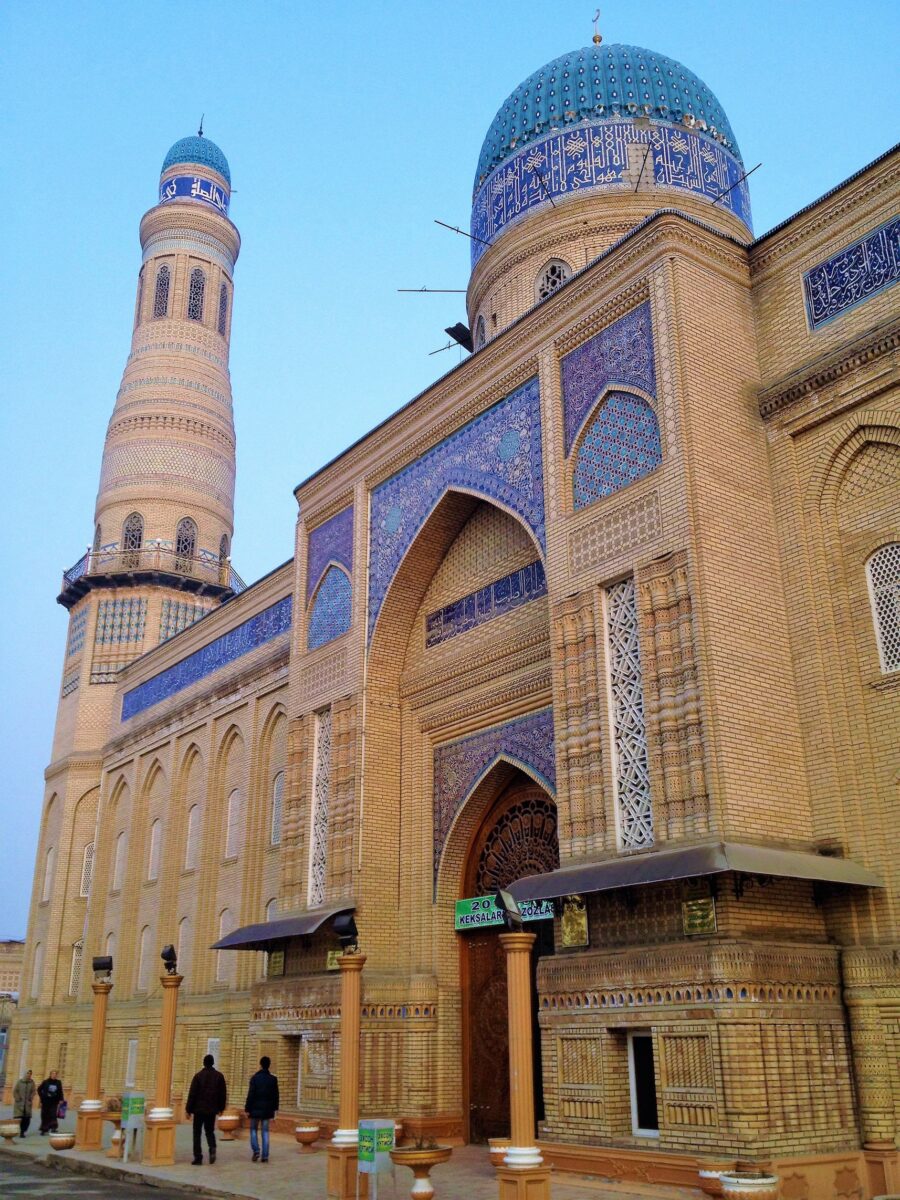 The Devonaboy Jome Mosque in Andijan. Photo by Carpodacus.

Andijan, perfect for a day trip, is the birthplace of Emperor Babur, founder of northern India’s Mughal dynasty. Accordingly, on the humpbacked Bagishamol hillside lies the Babur Memorial Park, its breezy avenues lined with fruit trees. At the top, a statue of Babur looks benignly down at visitors straggling up the hill. To his right, a small but imposing blue-domed museum houses Babur memorabilia. Elsewhere, in the heart of Andijan lies a madrasa, or educational center, purportedly set up by Babur’s father. The madrasa itself is somewhat unmemorable, but the entire complex is canopied with grape-laden trees casting shade and peace. Andijan’s dusty Regional History Museum has a somewhat eclectic collection of taxidermied animals, puppets, and paintings.

The Chontak choyxona offers an excellent plov made in lamb fat. 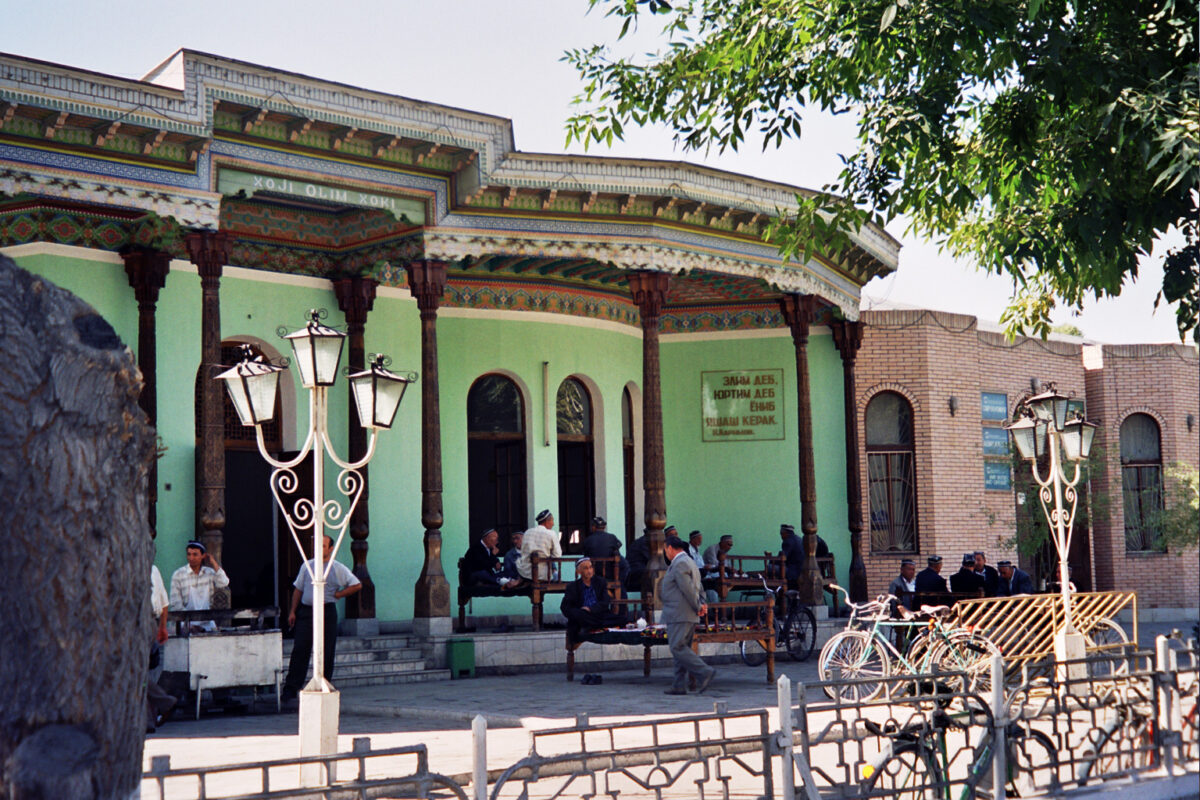 Kokand, once one of Uzbekistan’s great khanates (like a kingdom), is home to the relatively newer palace (completed in 1873) of Khudayar Khan, the last of his kind. The Russians obliterated the khanate entirely but the palace’s brightly-glazed tiles and sweeping courtyards still evoke the fairy-tale ideal of a grand dynasty. Close by is the Juma mosque, its courtyard bolstered by nearly 100 exquisitely-etched wooden columns brought from India; the mosque is girdled by a museum (and stores selling regional suzani cloth items, ceramic work, and the Uzbek sweetmeat, halve). Drive through the city and you’ll find it fertilized by Russian influences—the local bank, for instance, with Soviet motifs snaking down sea-green walls. And be sure to visit the Dohma-i-Shakon, a complex of graves in which Kokand royalty has been laid to rest. 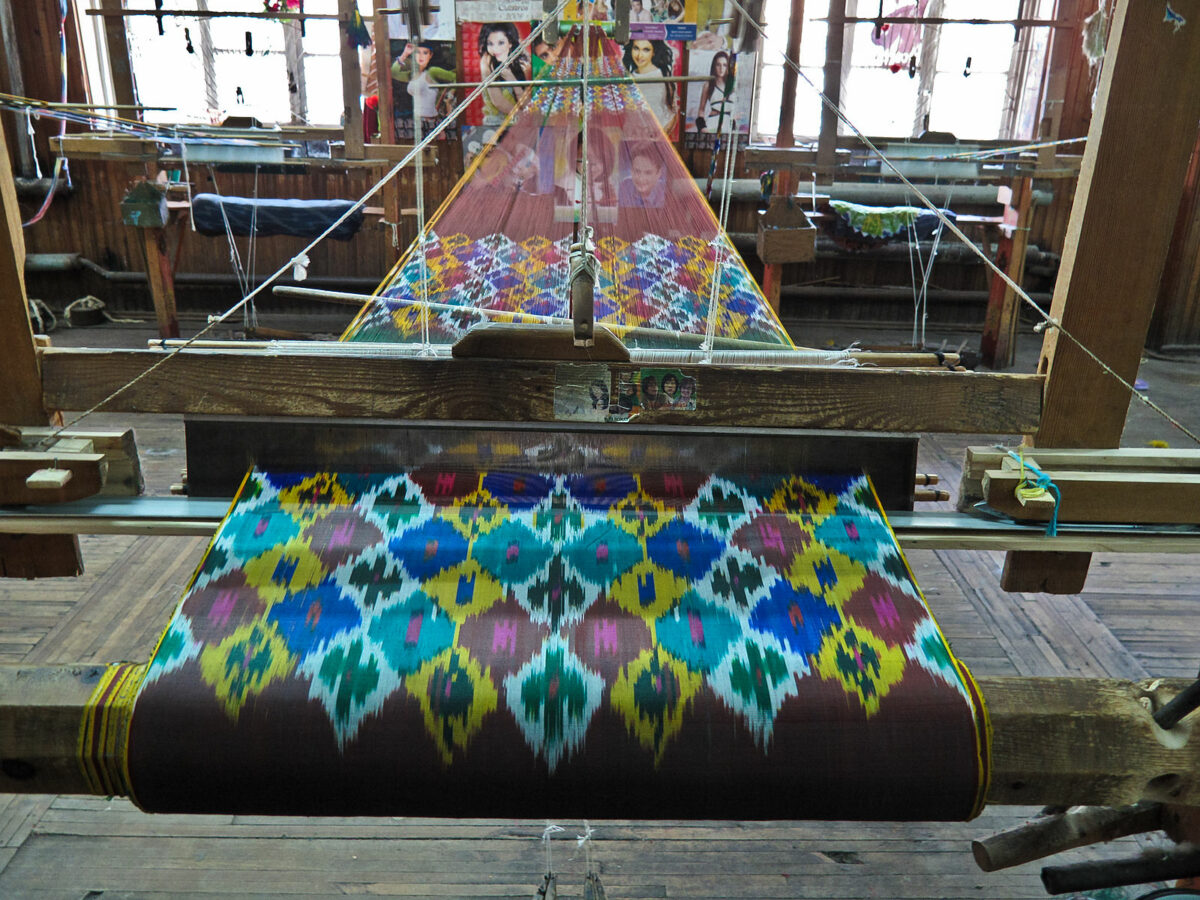 Margilon, said to have been founded by the Greek conqueror Alexander, is one of Uzbekistan’s last repositories of traditional silk weaving, an industry that was decimated by the Russian focus on industrialization. Today, a few artisans are attempting to keep this vanishing trade alive. Consequently, the town is marbled with shops selling silk items, and the Yodgorlik Silk Factory (where everything from spinning the silk to staining it in traditional ikat patterns is done by hand) is an enormous attraction.

Although Anor offers all manner of Turkish and Uzbek dishes, by far its most popular dish is its pizza pie with Coke. 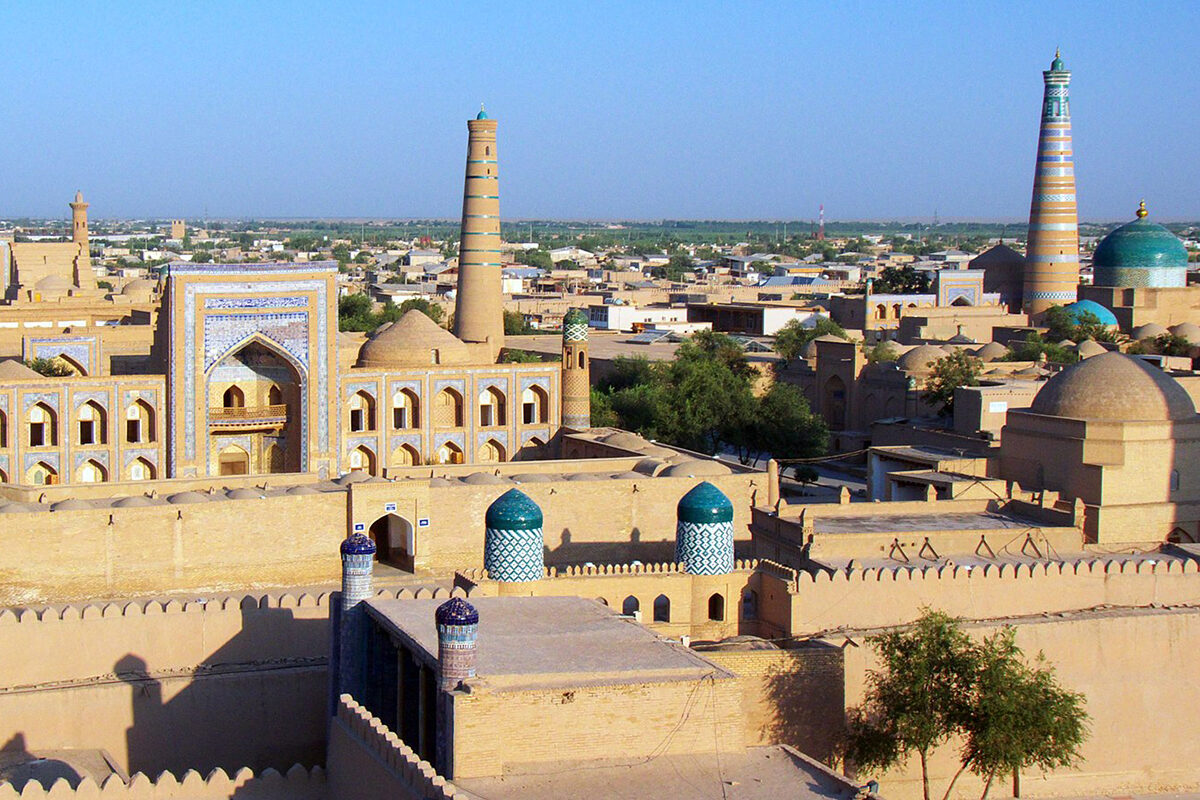 The view from the city walls in Khiva. Photo by Fulvio Spada.

If the ancient khans of Khiva were to happen upon their khanate today, they might not recognize it, so assiduously did the Russians airbrush it. Nevertheless, there are always streams of tourists eddying round Ichan Kala, the old town walled off from the main city. And no wonder, since it is a tantalizing treasury of (UNESCO-certified) Uzbek architecture, with mosques, mausoleums, madrassas, and minarets glazed in brilliant verdigris and turquoise.

The Orient Star Khiva is a 19th-century madrasa polished into a fancy hotel with modern toilets and air-conditioning, in the belly of the walled city.

Although Khiva’s specialty, the grass-green dill pasta (called shivit oshi) is flecked across restaurant menus in the old town, perhaps the most atmospheric setting for it is at the bustling Khorezm Art restaurant.

Check out our ultimate guide to road trips → 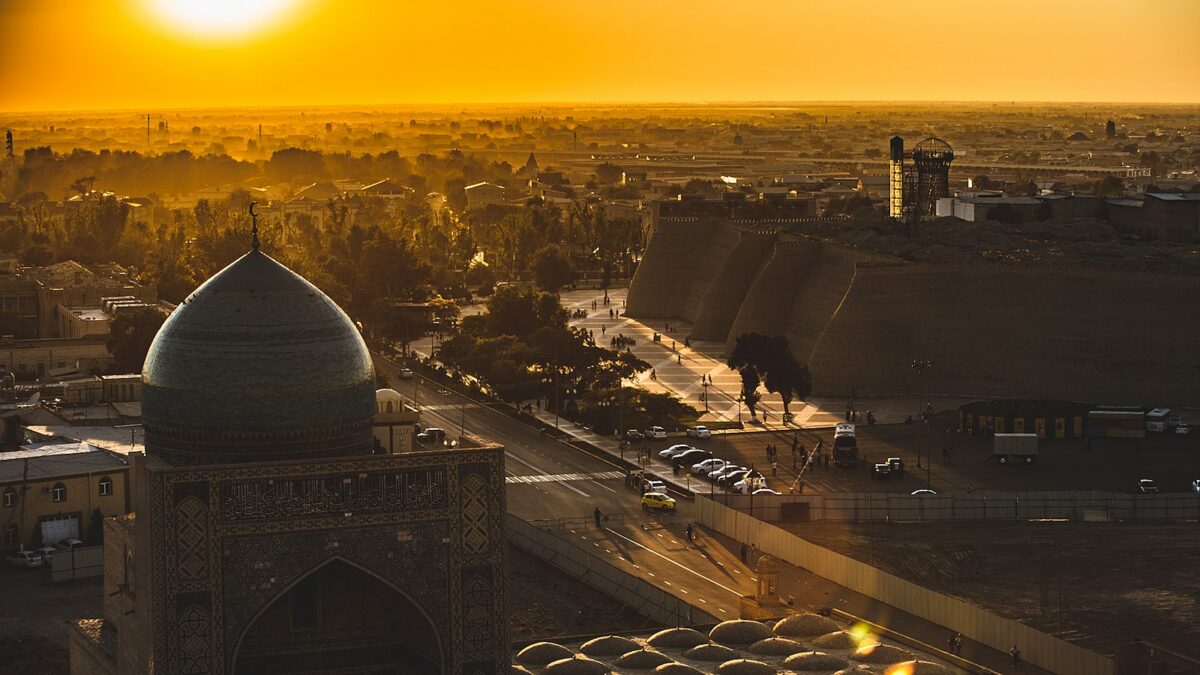 Islam, Judaism, Zoroastrianism, and Buddhism all meet in Bukhara. Photo by Pouria Afkhami.

To travel to Bukhara is to feel near to the Uzbekistan of antiquity, in which Islam, Judaism, Zoroastrianism, and Buddhism coalesced. The UNESCO-certified city center is honeycombed with mosques, caravanserais, and markets, and consequently glutted with more tourists than residents. There’s plenty to do but here are some notable mentions: the tiny Jewish quarter with its still-functioning synagogue; Mogoki Attori, the Zoroastrian fire temple that became a Buddhist temple that became a mosque; the craggy citadel known as The Ark, likely Bukhara’s oldest structure; the Kalon minaret spared by Genghis Khan even as he destroyed the rest of the city; the Lyabi hauz (pool) ringed by choikhanas (tea houses) and coffee shops; the ancient Esmail Samani Mausoleum; and the oddly lustrous palace of the Emir of Bukhara, a latticework of eastern and western architecture.

The boutique Amelia Hotel offers the twin delights of traditionally-frescoed and wood-etched rooms together with its excellent location—buttonholed in the heart of the old city.

Perennially clustered with travelers, this terrace restaurant skirts around touristy fare with offerings like Beef Hodgepodge and the (questionably-named) Jiz. 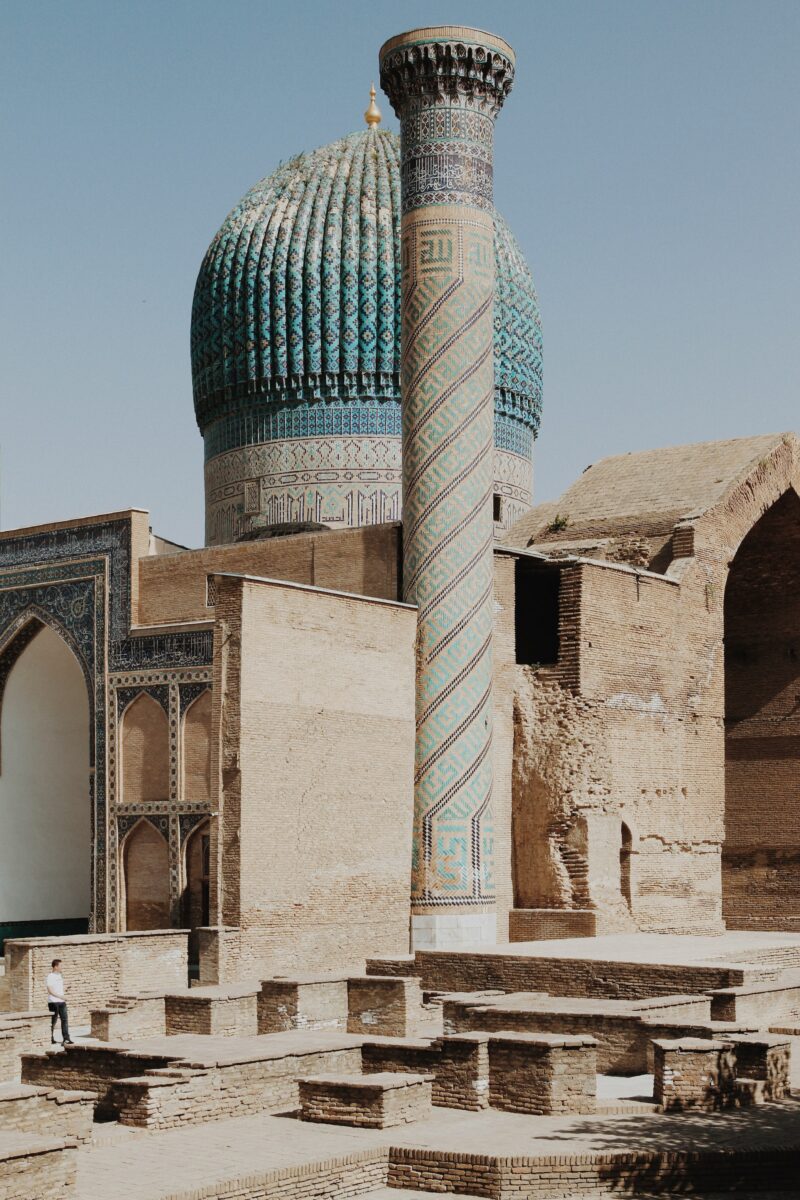 The Gur Emir Mausoleum in Samarkand. Photo by Ildar Garifullin.

The Shahi Zinda is a jewel box of mausoleums, flashing dizzying cobalt and verdigris domes against a razor-sharp blue sky. The Registan, which is perhaps the world’s most exalted public square. The Bibi-Khanym Mosque, resurrected from ruin twice (legend has it that Timur’s wife built it as a surprise gift for her husband).  Visit the Gur e Amir mausoleum where Timur is interred; Afrosiyab, a sweep of ruined citadel from the time of the Sogdian people (with an excellent museum abutting it); and Sultan Ulugh Beg’s 15th C astronomical observatory that points to a flowering of lofty intellectual achievement.

The anodyne Diyora Hotel is distinguished by its enormous rooms, and vast breakfast spread.

Plov is the distilled essence of Uzbekistan, and you should try it at Oshxona Ankhor. 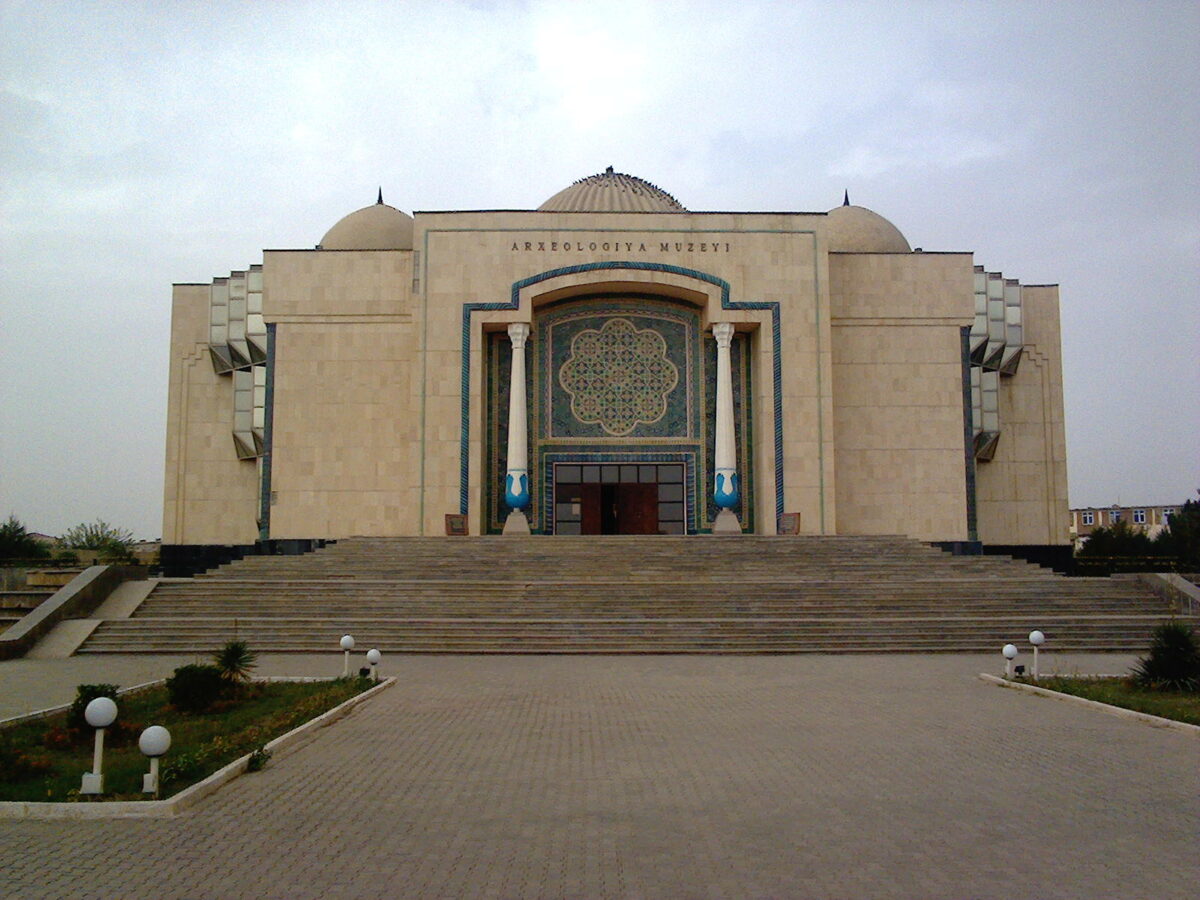 The Archaeological Museum of Termez. Photo by Zenwort.

Buddhism is veined through the southernmost rim of Uzbekistan, Termez (or Tarmita), thanks to the trans-Asian caravan routes that drew Buddhist monks and scholars from India, shouldering the weight of their newfound faith. Founded in the 1st BC, it is most famous for its sun-blanched Buddhist stupas and monasteries, Fayaz Tepa and Kara Tepa, and the lone, dun-colored Zurmala Tower, all unconstrained by the architectural conventions of the rest of Uzbekistan’s tourist cities. Its artifacts have been swept into the Djurkatana museum, a few steps away. But Termez cups multiple histories in the palm of its hand. Once, it was brocaded with the wealth of the Zoroastrian Sassanian emperors. Archaeologists have coaxed from its soil, artifacts from the time of Alexander the Great. And its sands are stubbled with more recent Islamic monuments such as the Sultan Sadat complex (the ancestral tombs of the Termez Sayyids) and the fortress of Kirk Kyz, crumbling to frass (legends swirl around it, most notably that of Princess Gulaim and her 40 maidens who buttressed the estate against marauding nomads).

Silk Road Termez Hotel (45/3a, Navoi str) is a low, unremarkable building set back from the main road, and therefore cushioned from the hubbub of traffic.