In Uganda, beauty is easy to come by. Sprawling jungles and lakes cocoon the former British Protectorate in some of the world’s most precious natural wonders. But in much of this East African country, the balance between people, wildlife, and the growing tourism industry is delicate, marred by strained relationships in need of healing. For Here Magazine Issue 07, we explored how Robert Byarugaba’s agricultural initiative in the southwestern region of Bwindi is on track to provide the antidote.

It’s the rainy season in Bwindi, Buhoma, where the daily afternoon thunderstorms have a way of marking time better than a clock. Opaque, dark clouds threaten the western Ugandan region from above as Robert Byarugaba, founder of the Bwindi Community Integrated Rural Development Initiative (BCIRDI), leads me down a path into what looks like unforgiving jungle. “Aren’t we just going to see the beehives?” I ask with mild trepidation, relieved to have worn my hiking boots. “Yes. Right down here.” His energy is calm and sure; his black loafers are shiny, but not new.

In every direction, wide green leaves sweat in the afternoon humidity. Byarugaba beckons for me to follow, swatting our way through the vegetation until we reach a clearing with several wooden posts that I don’t immediately recognize as beehives. He gestures for me to join him at the top of a well-built but unfinished tree house that towers over the two of us, using a hammer to bust open the big sticks that stand in place of a front door. Byarugaba surveys his 10 beehives with a mix of pride and concern. “They get wet in the rainy season,” he says. “You can always harvest more honey in the dry season. If we had the funds, we could get a shed to keep the hives dry year-round.” The question of funding, he tells me, is always a challenge, and as I learn more about our surroundings, I begin to understand why. 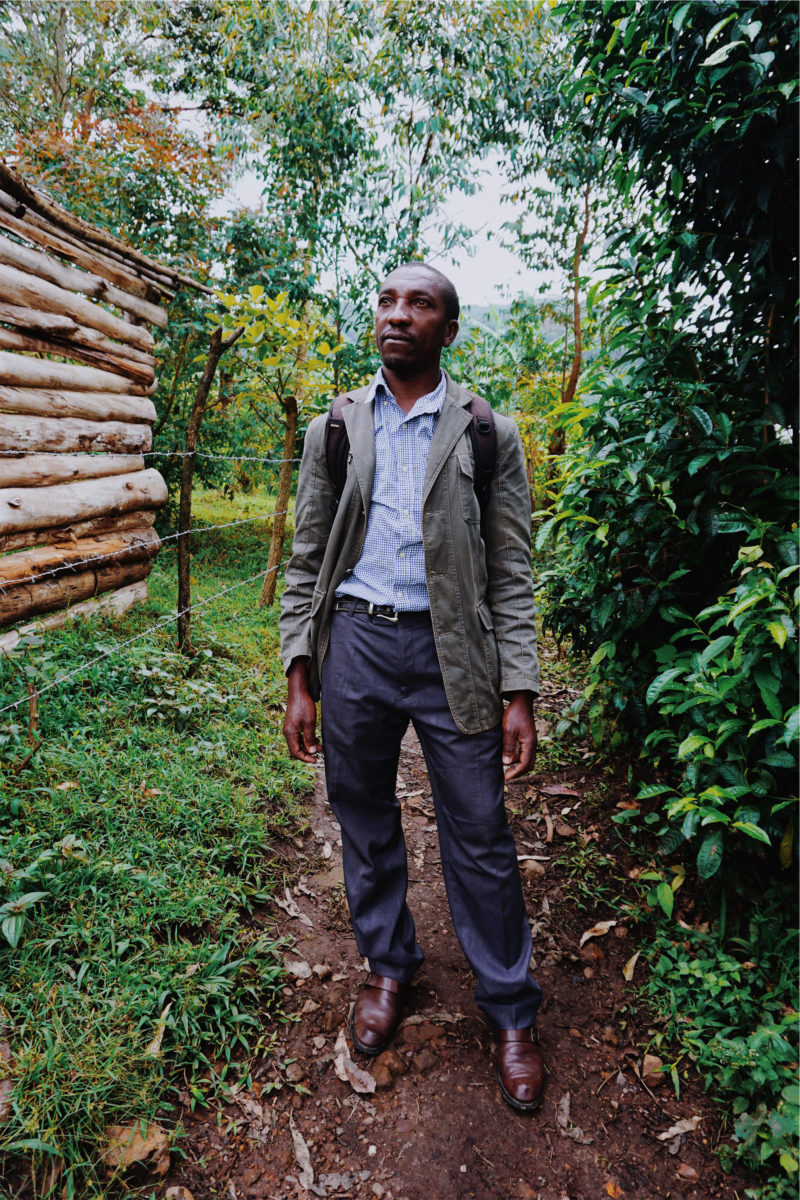 Before he founded the Bwindi Community Integrated Rural Development Initiative (BCIRDI) in 2016 to provide alternative employment opportunities for reformed poachers in his rural community in Uganda, Robert Byarugaba was a porter for tourists trekking to see gorillas in the Impenetrable Forest. 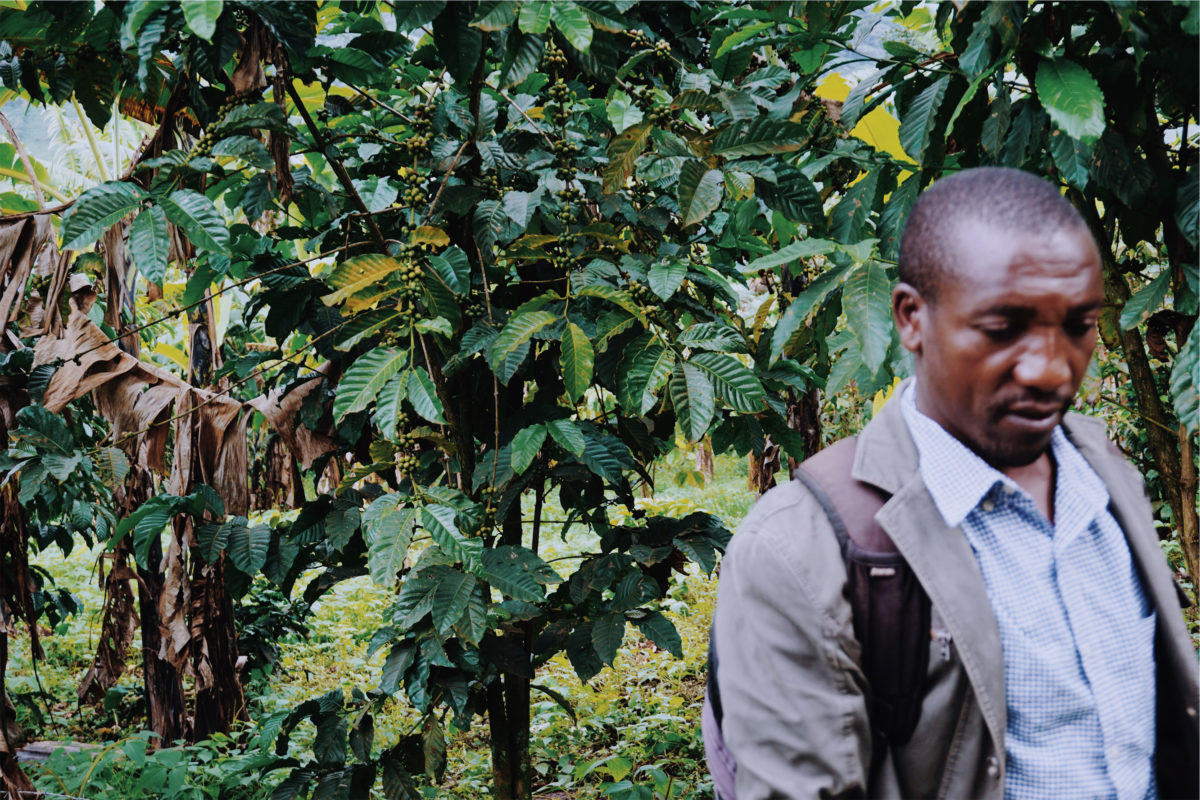 The seeds of BCIRDI’s first coffee plants (pictured) were sown in 2016 and have flourished in tropical Bwindi.

Byarugaba grew up on land that was incorporated into Impenetrable Forest National Park in 1992, when he was 19 years old. As the first-born son of a popular poacher, Byarugaba was pulled out of school at age 10 to start hunting bushmeat like wild pigs and daiker, a type of wild antelope. Even after the park was established in the early ’90s, Byarugaba continued poaching into the early 2000s, when he tired of living at odds with the law.

Byarugaba never set out to be a lawbreaker; the poachers in this community and others like it have little in common with nefarious black market and trophy poachers. “People are just killing for meat here,” he says. “Five kilograms of meat is five dollars in a market. Very few people can afford that. If you set your own traps, you can catch a daiker that’s 14 kilograms and feed your family for a week.”

Poverty is the status quo in the village of Bwindi, in stark contrast with the high-end lodges tucked away in the sloping hills above it. The lodges, of course, are occupied by tourists who come for one very specific, and very elusive, reason. Roughly half the world’s remaining population of endangered mountain gorillas lives in the Impenetrable Forest; and for decades, gorilla treks and sightings have single-handedly sustained tourism to this region. 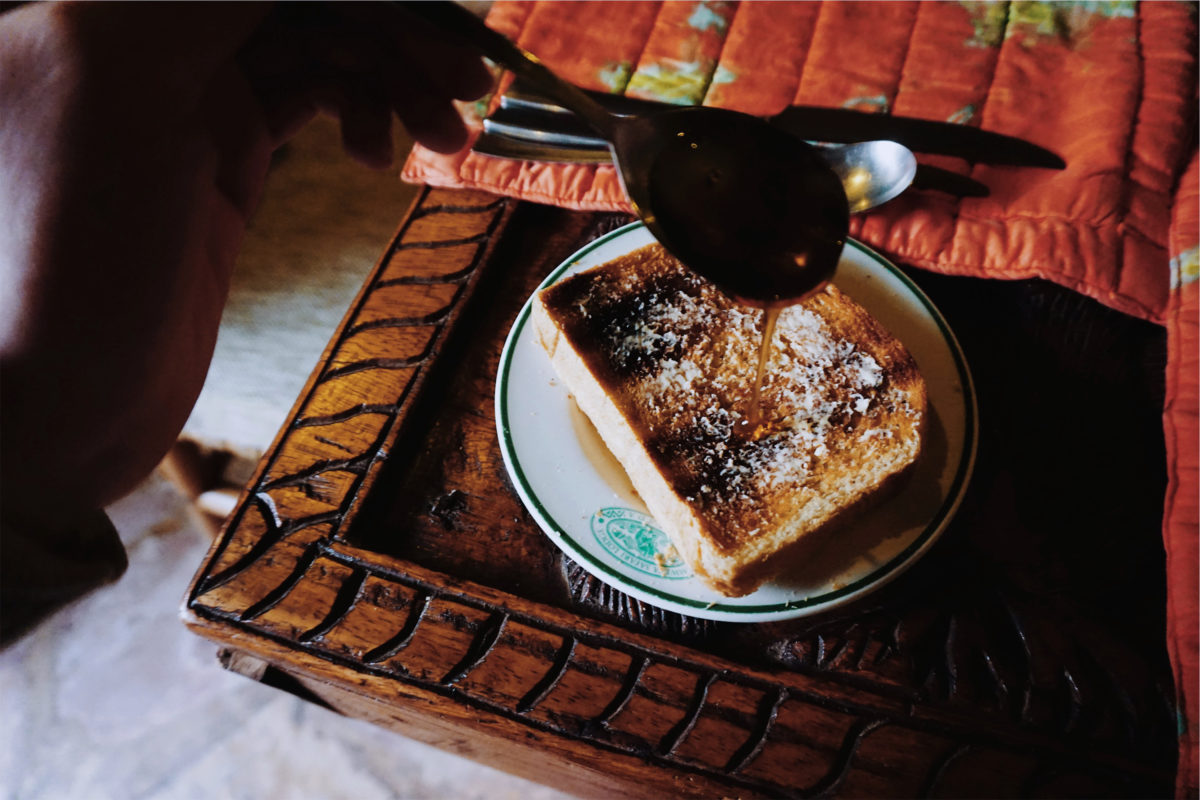 BCIRDI honey has an addictive smokiness to it that took my American palate by surprise. 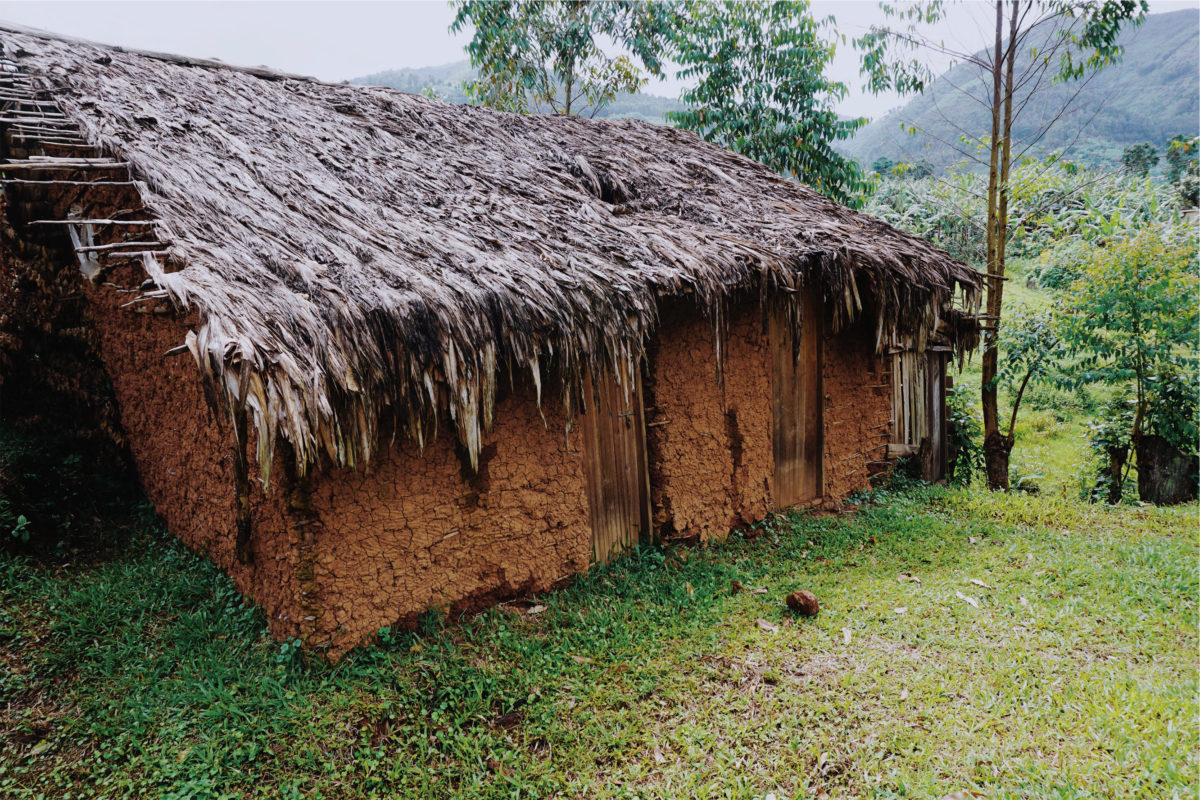 Oyster mushrooms are grown inside of mud huts by members of BCIRDI. “Beekeeping is mostly for men, and mushrooms are more for the women,” founder Robert Byarugaba tells me. “But women can work with bees if they want.”

In the foothills, however, Byarugaba tells me that resources are scarce and money is tight, which only escalates human-wildlife conflict. “The forest is big, but there are some gorilla families around here who come very close to the village to get to the banana crops,” Byarugaba tells me. “Gorillas get killed when they come for the crops. We had a 500-year-old banana plantation that was destroyed by gorillas and we saw no compensation from the government. Many kids don’t go to school because their parents make them guard crops during the day.”

Where he saw a need, Byarugaba acted. In 2016, he founded BCIRDI, a small operation of local farmers producing coffee, oyster mushrooms, and honey, the group’s most coveted commodity. The initiative primarily works with reformed poachers to provide alternative sources of employment and break the cycle of poaching for survival. Poaching aside, the only other reliable industry in Bwindi is tourism, which accounted for eight percent of Uganda’s GDP and about two percent of total employment in 2016(*). “Tourism is very important here, but a very small percentage of people are benefiting from it; only the people who work in it,” he says. Alternatively, BCIRDI “gives people a livelihood,” Byarugaba says. Though tourism alone is unable to support community growth and self-reliance, Byarugaba does not view all tourism antagonistically; he is hopeful that, as his collective grows, it will attract visitors who wish to learn about their projects and “connect more with the community.” 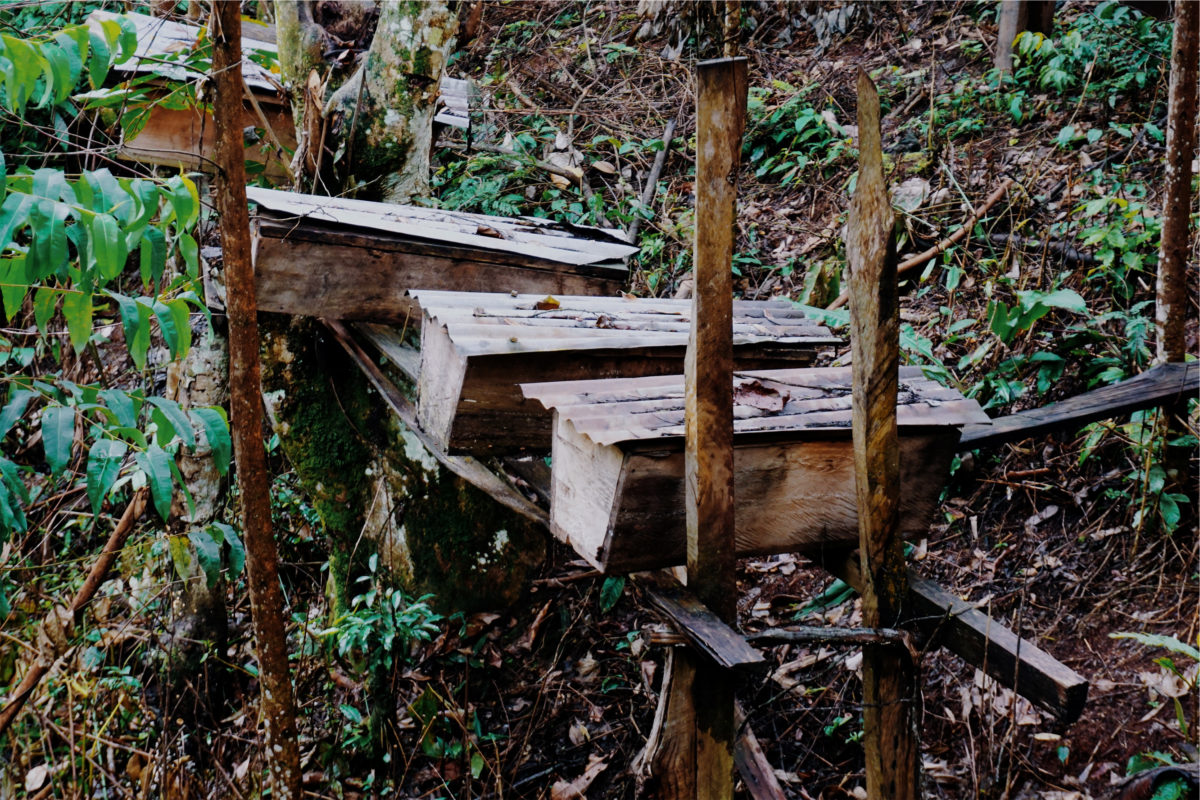 Though this land was inhabited by people long before it was set aside for federal protection, support systems like Byarugaba’s—those that help foster harmony between humans and wildlife—are just now successfully sprouting. The first coffee plants that BCIRDI members received in 2016 are now available for harvest, bringing in the first trickle of revenue to Byarugaba and his organization. Another goal of his is to be able to provide members with pigs, rabbits, and other livestock. “If you give hunters trees, bees, pigs, whatever, those projects keep them busy. They don’t need to go to the forest to hunt. They have work.” Though it’s currently only sold on the local market, he predicts that honey, of all the products grown on site, could be the most successful export, given the right resources. Right now, the entire operation is done by hand, using buckets and strainers—the infrastructure is not yet strong enough to support international demand. “We’re working towards creating more and more of the honey,” Byarugaba says. “I want this project to become sustainable.”

As a parting gift, Byarugaba gives me an entire Tupperware container full of the rich, amber-colored goodness. I promise him that I’ll do my best to eat it all in the next 36 hours, before I depart Uganda for New York. Later that night, I bring the honey to dinner and share it with my travel companions. We’re indiscriminate with our drizzling, smothering everything on our plates in the stuff; we fawn over the complex flavor and the smoky overtones, qualities that we’ve never tasted in honey before. While we eat, thunder and lightning crack outside, and a sheet of heavy rain closes in around us. I take the rain as a good omen for Byarugaba, whose community initiative will hopefully soon break wide open, just as the sky finally has.