Locally-grown produce and a strong camaraderie are tightly woven into the fabric of Tucson’s restaurant community.

The Pan de Kino at neighborhood bakery Barrio Bread has a slightly sour yet earthy quality to the inner loaf. If freshly baked, the interior is chewy and almost moist, its crunchy outer shell dusted with a stencil of the Arizona flag—a single star beaming out from the center.

The flour used in this artisan bread is called White Sonoran Wheat. This ancient wheat is a desert-adapted grain that was brought to the Sonoran Desert (which spans Southern Arizona, California, and Northwest Mexico) by Spanish missionary Padre Eusebio Francisco Kino in the 1690s. At the time it was a welcome novelty, distinct from what was traditionally grown in the region, but now it is one of the most enduring grains in an area that has been agriculturally active for over 4,000 years—the longest continually operating agricultural region in North America.

Lining the Mexican border, the Sonoran Desert reaches up to 115 degrees in the summer, and heavy monsoons wipe out the region’s weaker crops.

“We no longer can rely on ‘big agriculture.’”

Yet Tucson is surprisingly green. Dense sagebrush coats the dry ground and enormous saguaro cacti sprout from the earth in front of homes, along highways, and through the craggy mountains that surround the city. And though these aren’t necessarily flora you’d harvest for food (however some creative chefs may try), they prove that the city has an arable quality to it. The things that grow here are unique to the region, and just so happen to both delicious and, for the most part, sustainably grown by local farmers. Tucson has found a way to create a local food supply that benefits the community as well as the city’s award-winning restaurant scene.

“We no longer can rely on ‘big agriculture’ or ‘big government’ to support what’s happening within our communities,” says Don Guerra, who owns Barrio Bread and has become a fixture in the Tucson community-food movement.  Guerra started Barrio Bread out of a converted garage in 2009 after discovering there was no healthy, artisanal bread option when he first moved to the city. “We don’t need sugar in bread. We don’t need preservatives or fats. Bread is flour, water, salt,” says Guerra. 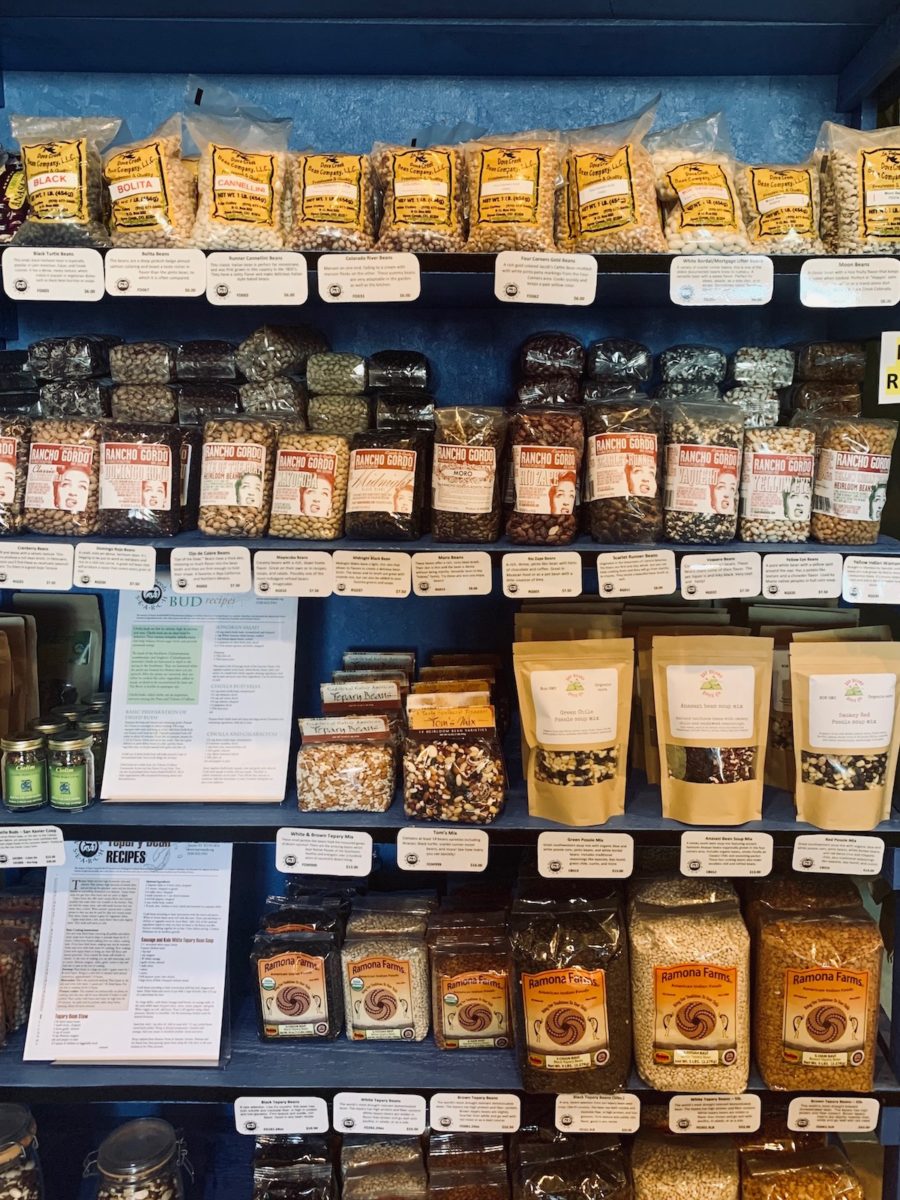 Sample of beans sold at Native Seeds/SEARCH in Tucson, Arizona. Photo courtesy of the author.

The bakery became a local sensation. “A thousand loaves here will be gone in three hours,” says Guerra, with the people of Tucson lining up around the block for fresh bread with local flavor, including the Pan de Kino and the Barrio Mesquite, a uniquely spiced loaf of naturally leavened bread made with local Harvest Mesquite flour and pumpkin seeds.

“I have a direct connection with farmers. My grain chain and my network is very short: It’s the farmers, millers, and me,” Guerra says. Barrio Bread’s partners include organically-certified BKW Farms, which has been family-owned since 1939, and the San Xavier Co-op, which was founded by the Tohono O’odham Nation and works to preserve their indigenous culture’s agricultural traditions and sacred environmental values. Arizona has the largest concentration of American Indian farms in the United States, with more than half of all farmers and ranchers being American Indians, according to the Arizona Farm Bureau. Farm tours and volunteer opportunities are available at the San Xavier Co-op regularly.

Arizona has the largest concentration of American Indian farms in the United States.

Of course, the ingenuity of the modern Tucson food scene pre-dates Barrio Bread, and the region’s biodiversity extends far beyond wheat—which is a major reason why the city was designated the only UNESCO City of Gastronomy in the United States in 2016.

The nonprofit Native Seeds/SEARCH began preserving and cultivating indigenous and desert-adapted seeds in the 1970s, such as melons (including a variety grown by the Cochiti Pueblo) and squash (like the native Magdalena Big Cheese, named for its flattened circular wheel-of-cheese-like shape), along with greens, beans, herbs, and  more. All of which can be grown in the Sonoran Desert  and shipped worldwide through the Native Seeds/SEARCH website.

There is also Mission Garden Project, which grows heirloom fruit orchards and vegetable gardens that conserve agricultural practices of pre- and post-colonial contact in the region, spanning over 4,000 years of food history. 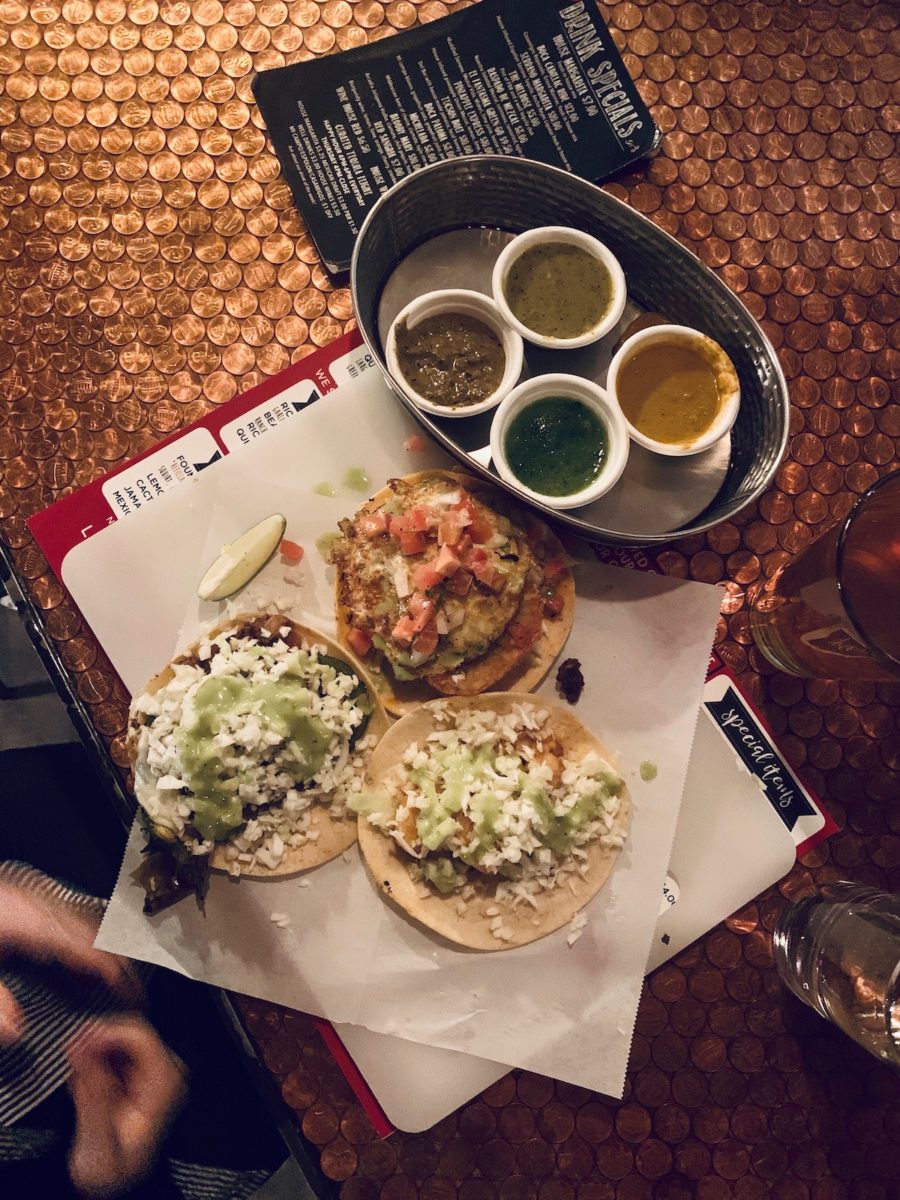 Tacos and salsa at BOCA Tacos y Tequila in Tucson, Arizona. Hot tip: the margaritas are delicious and reasonably priced. Photo courtesy of the author. 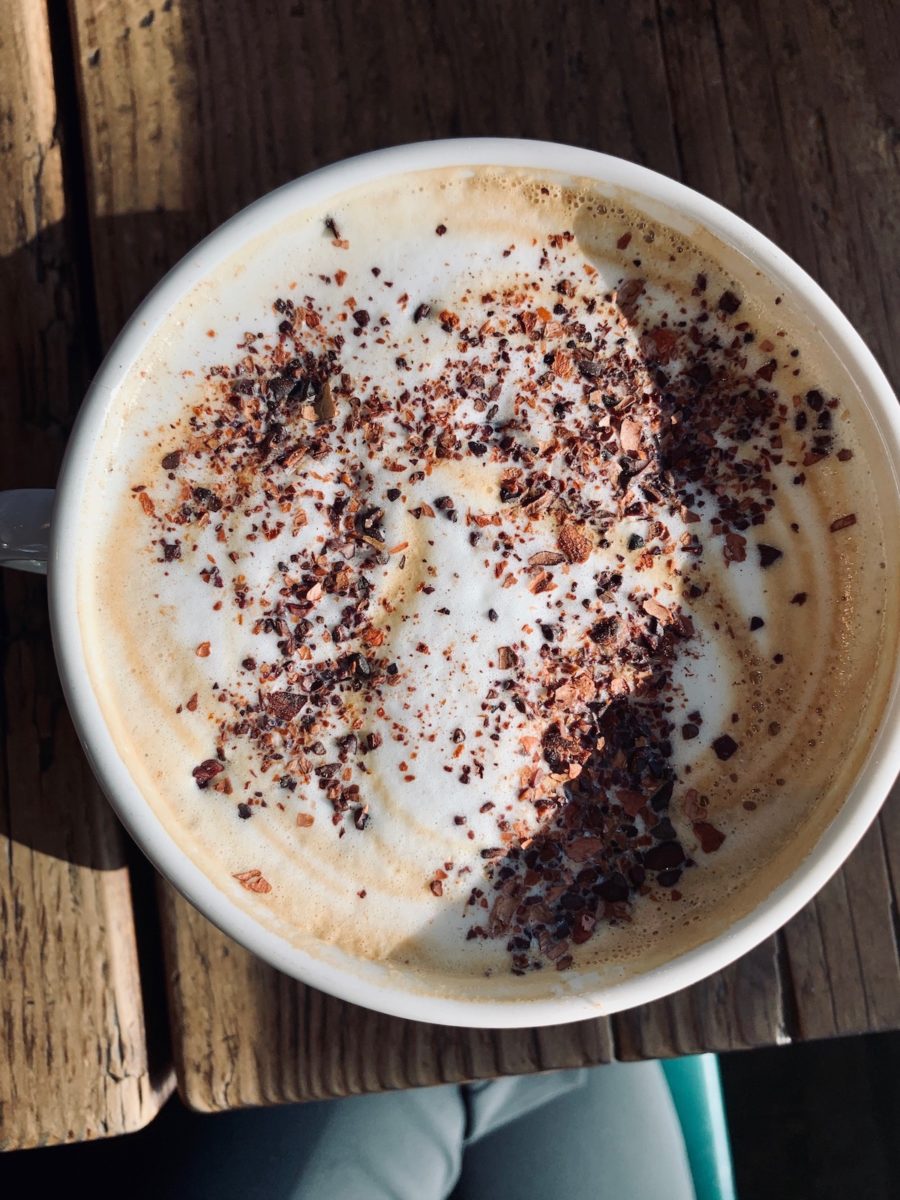 A latte at Exo Coffee roast topped with flakes of Monsoon Chocolate, an inventive local chocolatier. Photo courtesy of the author.

These organizations serve as anchors to local culinary tradition, which is represented in many of the city’s restaurants today. Two-thirds of more than 1,200 restaurants and bars in Tucson are locally owned, and many of those are City of Gastronomy “certified,” meaning they are strongly connected to the local food system, use environmentally and socially responsible business practices, and work to keep Tucson’s food heritage alive. 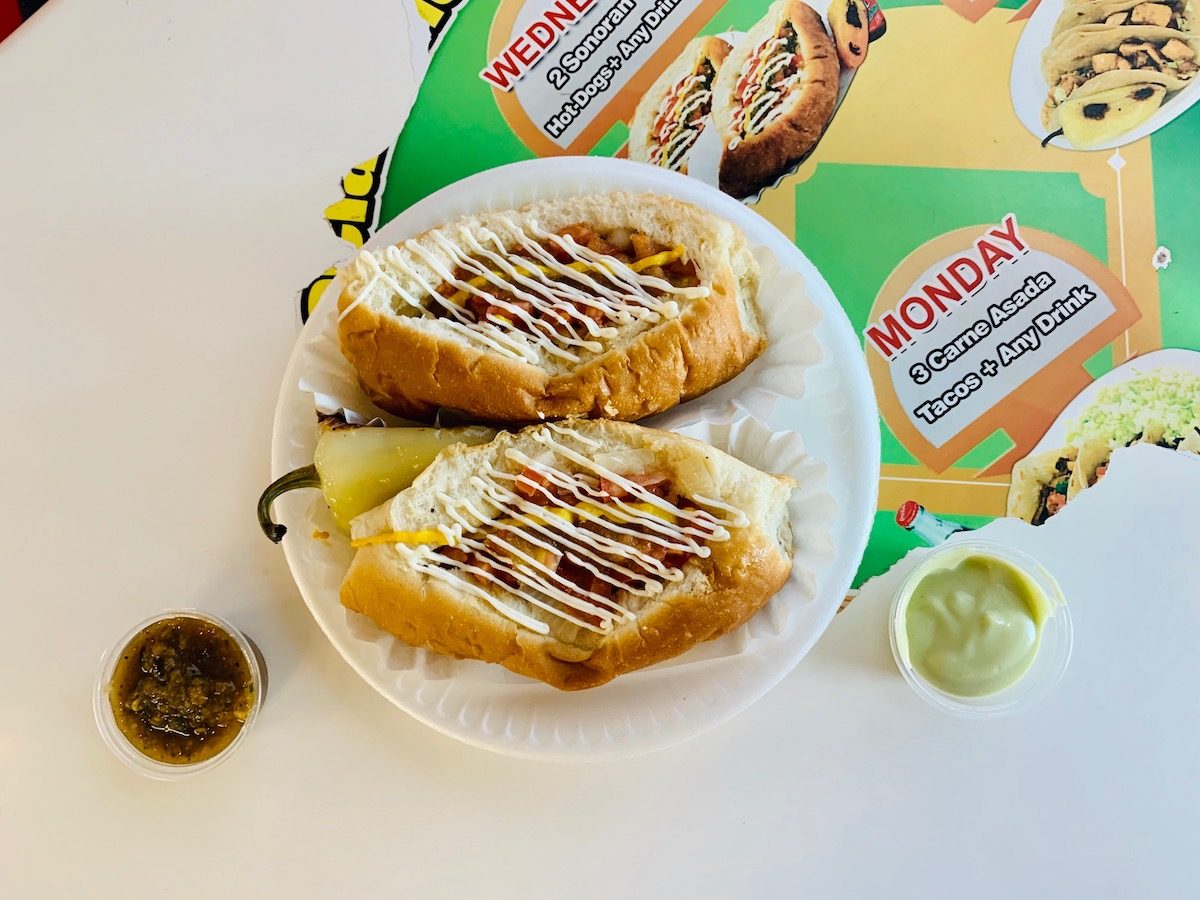 You haven't experienced pillowy bread until you've had the bolillo bun at El Güero Canelo in Tucson, Arizona. Photo courtesy of the author.

For something more casual, try BOCA Tacos y Tequila for 24 varieties of taco and homemade salsas, which pair perfectly with their outdoor patio. Or taste the Sonoran Hot Dog, another James Beard Award–winner from El Güero Canelo, featuring a bacon-wrapped dog with onion, tomatoes, and pinto beans in a fluffy bolillo bun topped in jalapeño sauce.

Perhaps most surprising is the local wine—yes, Southern Arizona wine. Sand-Reckoner Vineyards grows a variety of organic and biodynamic grapes on Tucson’s Mount Lemmon, most notably the malvasia bianca. This Italian grape is overlooked in most regions of the world, but its interaction with the soil and climate in Tucson lends a distinctly crisp and lightly floral taste to their 2017 vintage. Another standout includes their 2017 roussanne, an orange wine that is bone-dry to the tongue but smells of creosote, the desert herb that gives the monsoon rains its sweet and smoky scent. You can try all of Sand-Reckoner’s wines at their downtown Tucson tasting room. 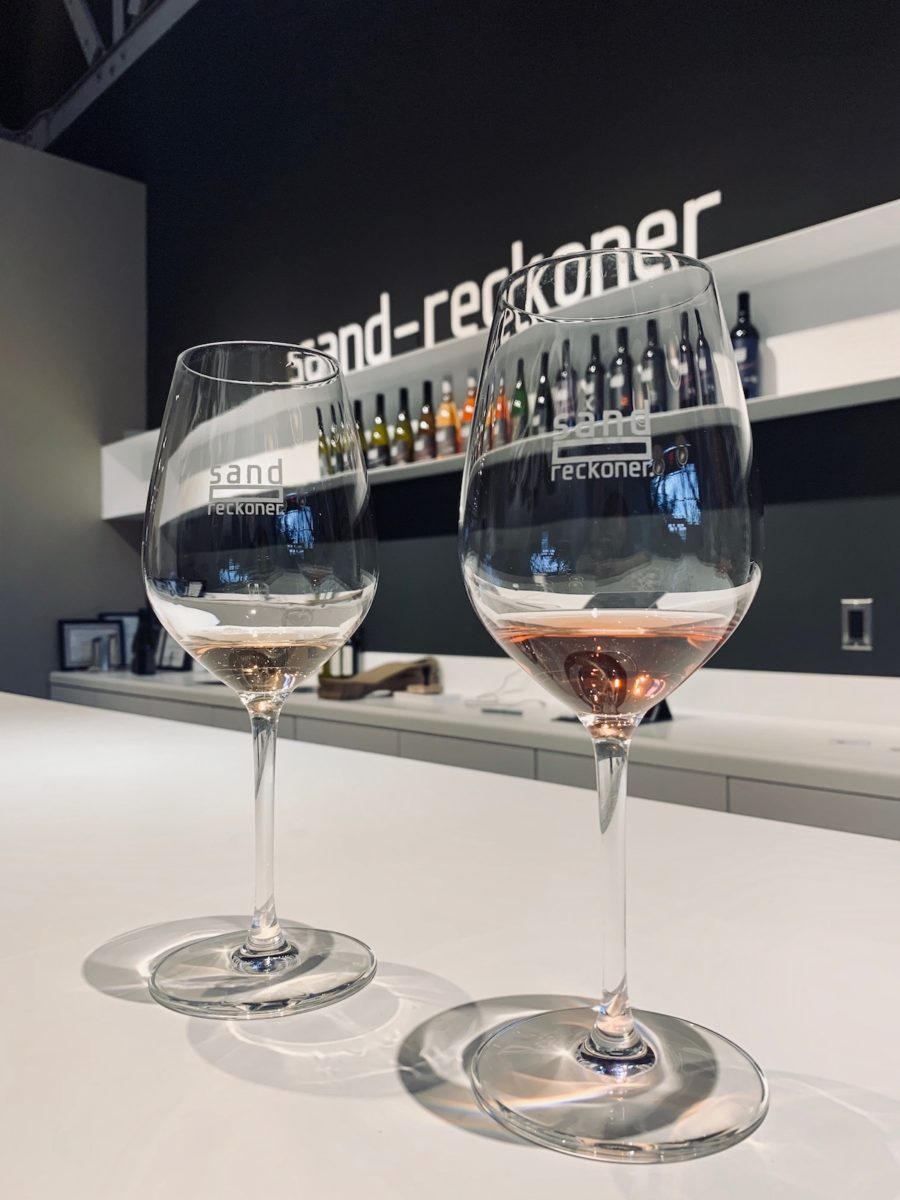 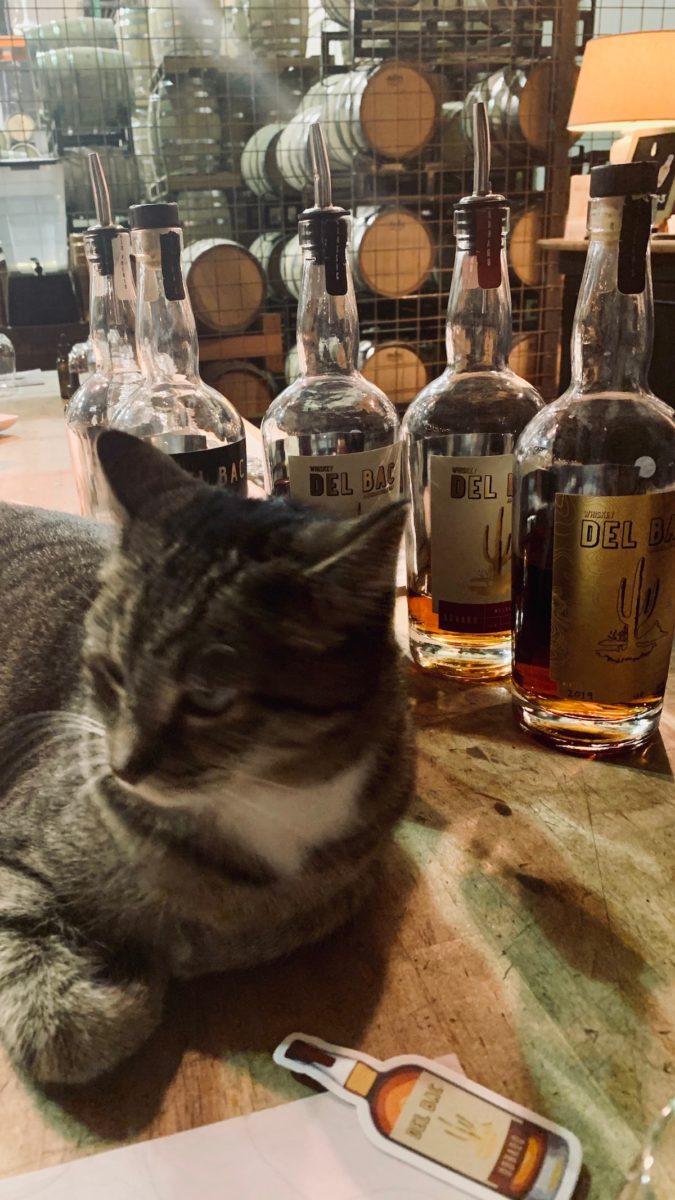 Keep an eye out for Whiskey del Bac's friendly brewery cat at your tasting. Photo courtesy of the author.

Liquor-wise, the Whiskey del Bac has found a uniquely Tucson twist to the single malt whiskey process: smoking the barrels with mesquite for a naturally smoldering aroma and taste. Tours and tastings are available at their distillery.

On the brewery side, Ermanos Craft Beer & Wine collaborated with Barrio Bread on a “Leaven Life” brew, which features heirloom grains like Red Fife and the Sonoran Wheat. It appears that strong ties to the land lend well to a strong sense of camaraderie. “In the Tucson food community, people actually want to work together,” says Guerra. “It’s turned from chefs competing to chefs collaborating.”

Local food has had a major impact on Tucson’s cultural landscape, and for Guerra, it all goes back to a community understanding of the land and another type of sustenance it can provide: education.

“An eight-year-old kid came in the other day asking for Khorasan,” says Guerra. “Khorasan is a desert-adapted grain from Iran that grows here. This eight-year-old kid now knows that he can order bread based on a certain grain—that’s mind-blowing to me.”