What I learned on a long-distance hike with the Aboriginal Land Council of Tasmania, Australia.

The smell in the Launceston Tasmanian Aboriginal Centre seesawed between the sweetness of freshly baked scones and the ripeness of sweat. Our group of eight women assembled at a large banquet table for the start of the Wukalina Walk, a multiday hike organized by the Aboriginal Land Council of Tasmania and led by three Tasmanian Aboriginal guides. Around the room were images of resistance and solidarity: black, yellow, and red symbolizing the Australian Aboriginal flag; a mural that read “Black Radio” covering the back wall; old photographs of elders who had passed but whose memories would be very deliberately preserved.

Auntie Sharon, an elder, had prepared us hot scones with cream and jam and passed around a bag of local cherries. We snacked as we signed waivers and loaded our provided backpacks with enough clothes and toiletries for three days, plus gaiters to protect from snakes and sunscreen to protect from the ozone (it’s the thinnest in the world over Tasmania). We got acquainted with two of our guides: 26-year-old Djuker Willis-Hart and 19-year-old Carleeta Thomas, whose 20th birthday was three weeks away. 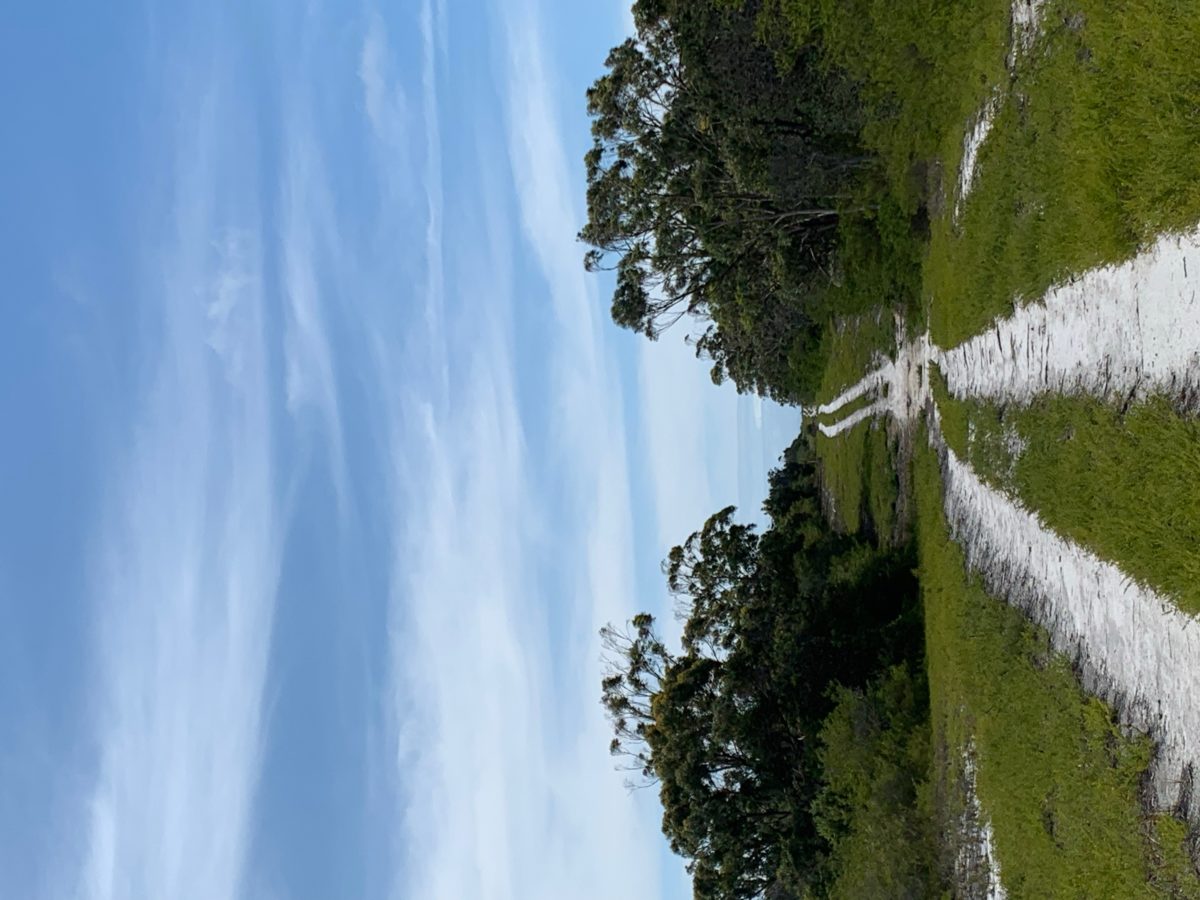 A brief pause on the trail as we caught our breath, crossing the only road for miles in this part of the bush: a route for emergency response workers.

At the table, an elder called Uncle Clyde introduced himself, explaining a bit about the significance of the journey ahead of us. We listened with a mix of despair and intrigue as he shared a brief history of Tasmanian Aboriginals, including how thousands of years of life and community had been nearly—but not entirely—destroyed after just 17 years of European colonization. And while Indigenous and Aboriginal cultures are endangered unilaterally around the world, Tasmanian Aboriginals have had a particularly steep uphill battle against a government that teaches in schools that their people had reached “extinction” by the 20th century. Djuker and Carleeta, both descendants of those said to be extinct, were among the students all across Australia who learned this in history classes.

Why You Should Travel to Australia’s Mornington Peninsula in Winter→ 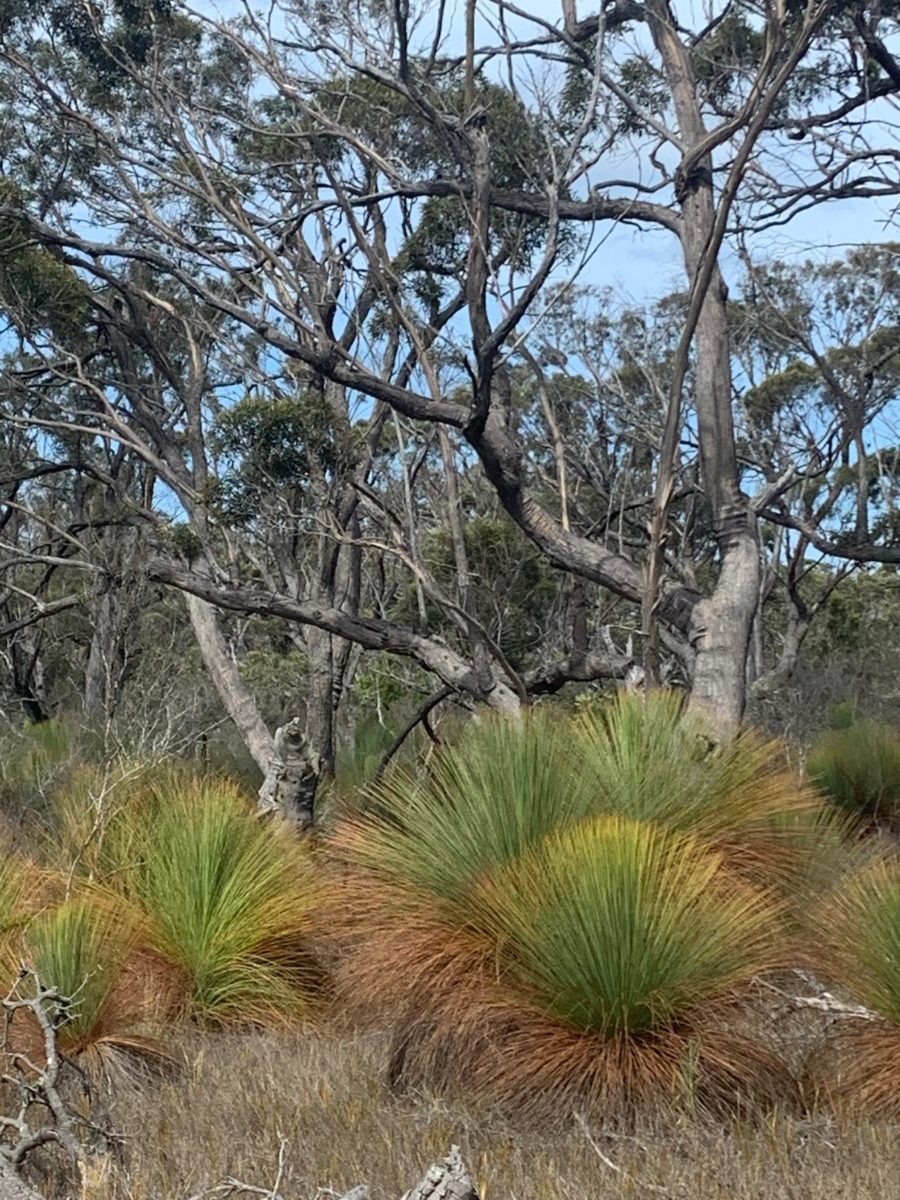 Yucca trees on the hike from Mount William to krakani lumi, our campsite.

For surviving members of the Tasmanian Aboriginal community, the Wukalina Walk is in direct defiance of that fabricated history. “We were fragmented and bleeded, but not lost,” Uncle Clyde said at the table, and added that on the Walk, “it’s a story of survival, of recognition, that we bring with us.” It began to sink in that this wasn’t just a hike that we were embarking on; we were being invited to witness the rewriting of history.

Armed with that knowledge, we shipped out on a bus to the start of the Wukalina trail, known as Mount William in English. Around the rest of Australia, Tasmania has a reputation for being colder and darker than the mainland, the weather more tempestuous and less predictable. The drive from Launceston struck me as a confirmation: Out the bus window, the landscape was all sepia-toned, like the gold from the sun was being smothered under a gray mist. 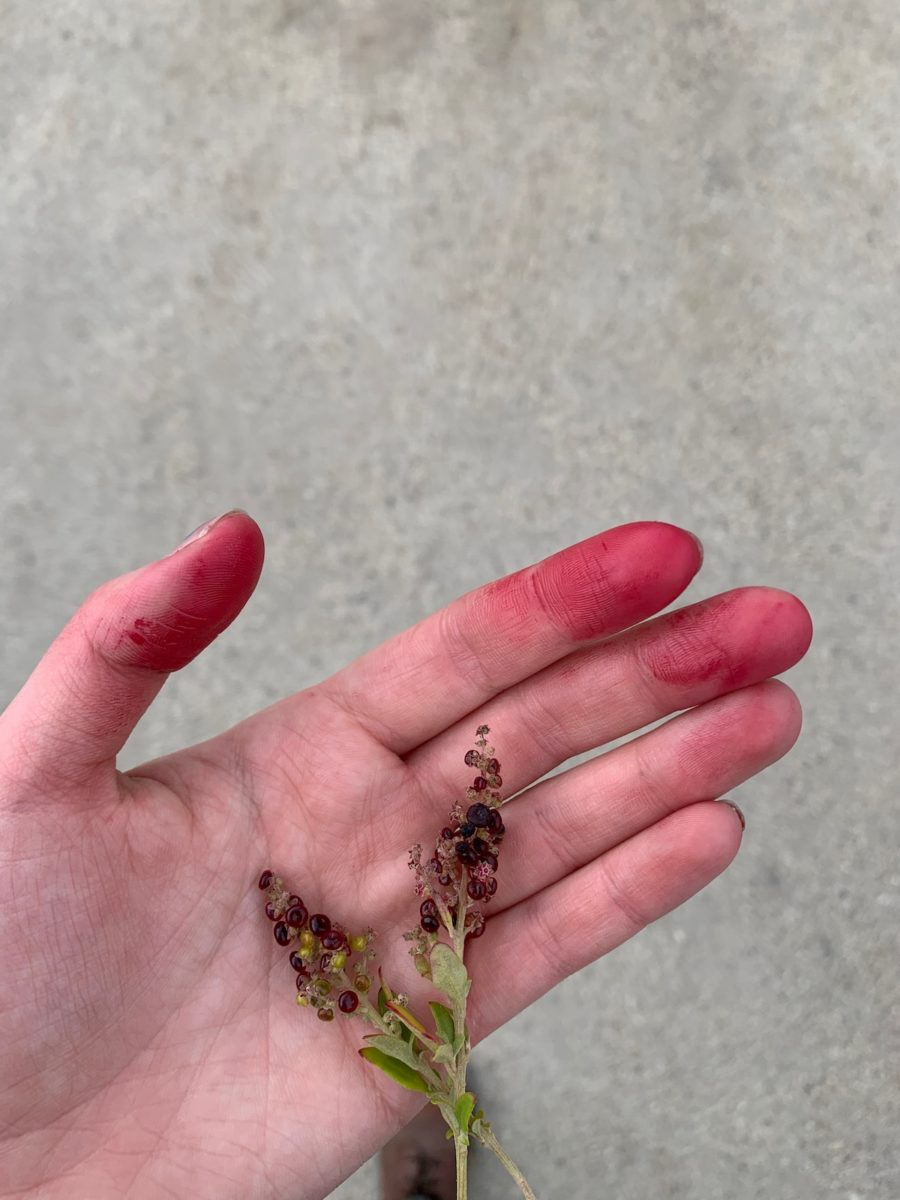 During our walks, Djuker, Carleeta, and Justin showed us bush tucker like these little berries, as well as sea spinach and saltbush.

We began our hike in the morning, summiting Wukalina and continuing on to camp for roughly six miles through the bush. In palawa kani, the native language of the palawa people, wukalina means “breast.” It’s not a very tall peak, but it’s steep, and the view from the top was beautiful. Back on the trail, mountain dragons and red-necked wallabies occasionally crossed our path. Djuker pointed out multiple snakes, though they were too camouflaged for me to see, and yucca trees stood with their pointy leaves erect in the dry air. By early afternoon, the sun had made a dramatic entrance through the eroded ozone layer and was beating down on our scalps and shoulders.

“We were fragmented and bleeded, but not lost.”

My feet ached for the final mile as we wove our way past giant spiderwebs and inchman ants, which are, as the name suggests, an inch or so long. Everything wanted to bite us, including some of the plants, but even so, the isolated bush was peaceful. We walked mostly in silence, occasionally stopping to discuss medicinal uses of certain plants or growth patterns of different trees, until we reached the campsite, called krakani lumi: a large half-dome structure, open to a fire pit in the front and connected to a narrow kitchen and dining space with toilets and sinks in the back, railroad style. 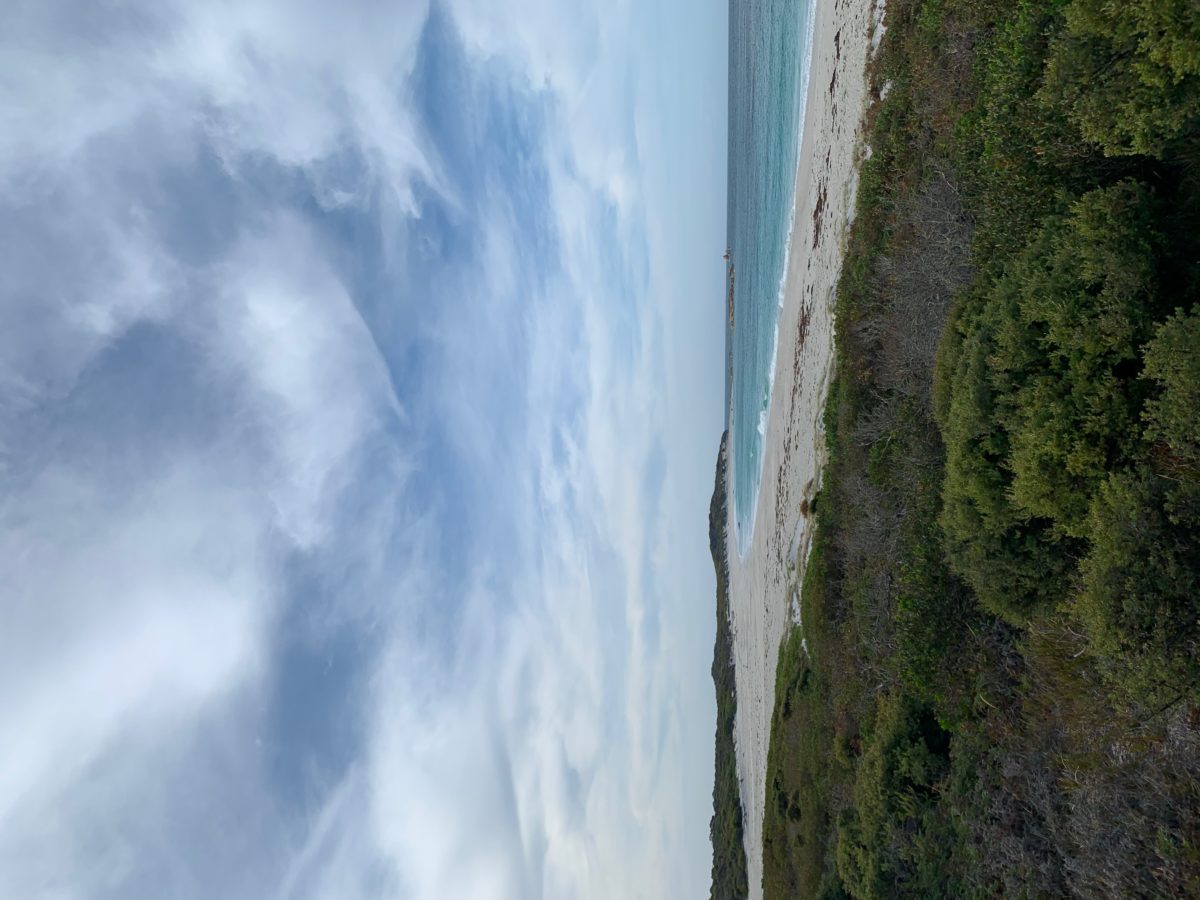 Gloomy skies over Cod Bay near our campsite, where I took freezing daily swim.

There to welcome us was our third guide, Justin Stonehouse, and camp coordinator Danny Gardner with his six-year-old son, Manny. His full name is Mannala, after the 18th-century elder and warrior chief Mannalargenna, who led a resistance against British invaders.

To initiate us into our home for the next two days, Danny stoked a fire in the pit and began a cleansing ceremony, using the smoke to bathe us from our feet to the tops of our heads. He went around the circle to each person, offering the energy to heal our bodies, minds, and spirits. “The best way to experience the bush is to stop, look, and listen,” he said once he had finished with the ceremony, instructing all of us to slow down and tune in to our environment as best we could. 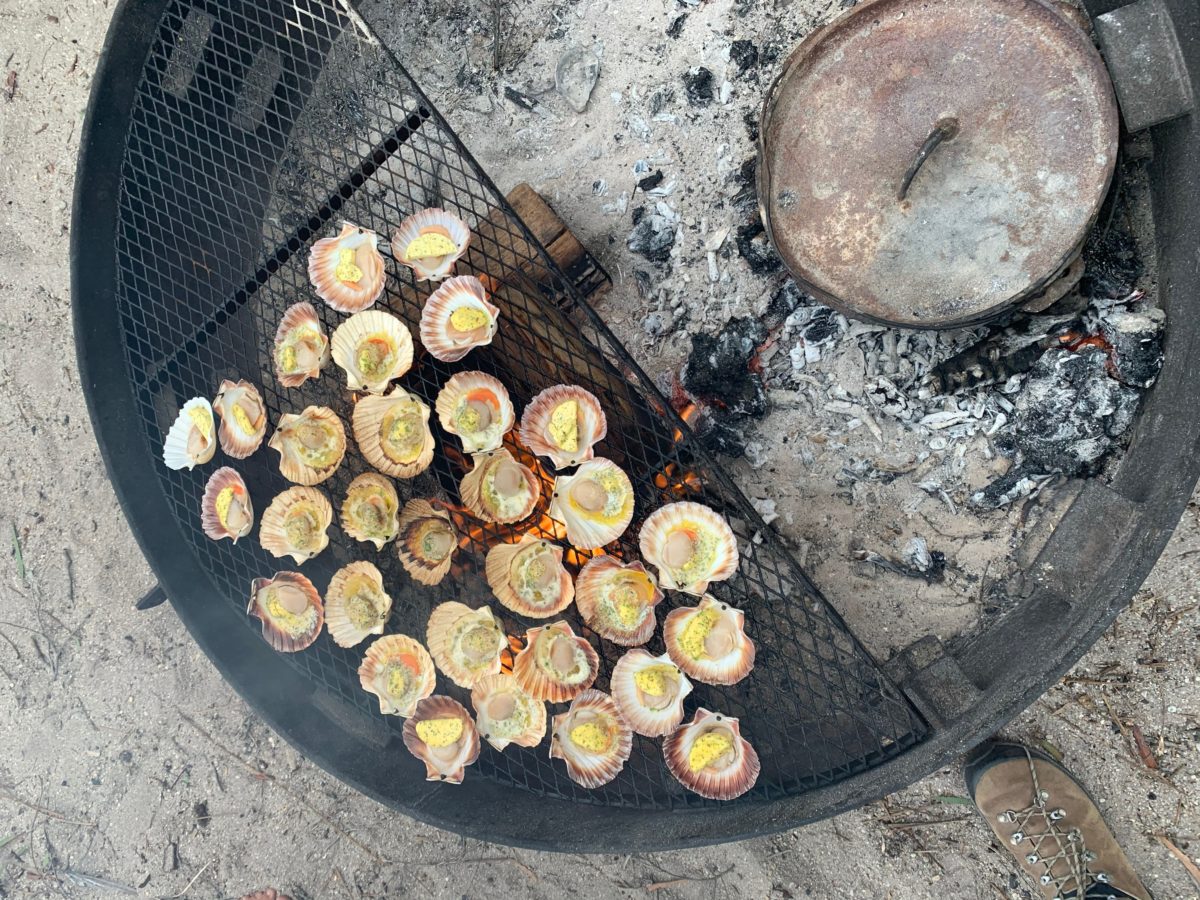 Carleeta’s fresh local scallops on the fire at krakani lumi. 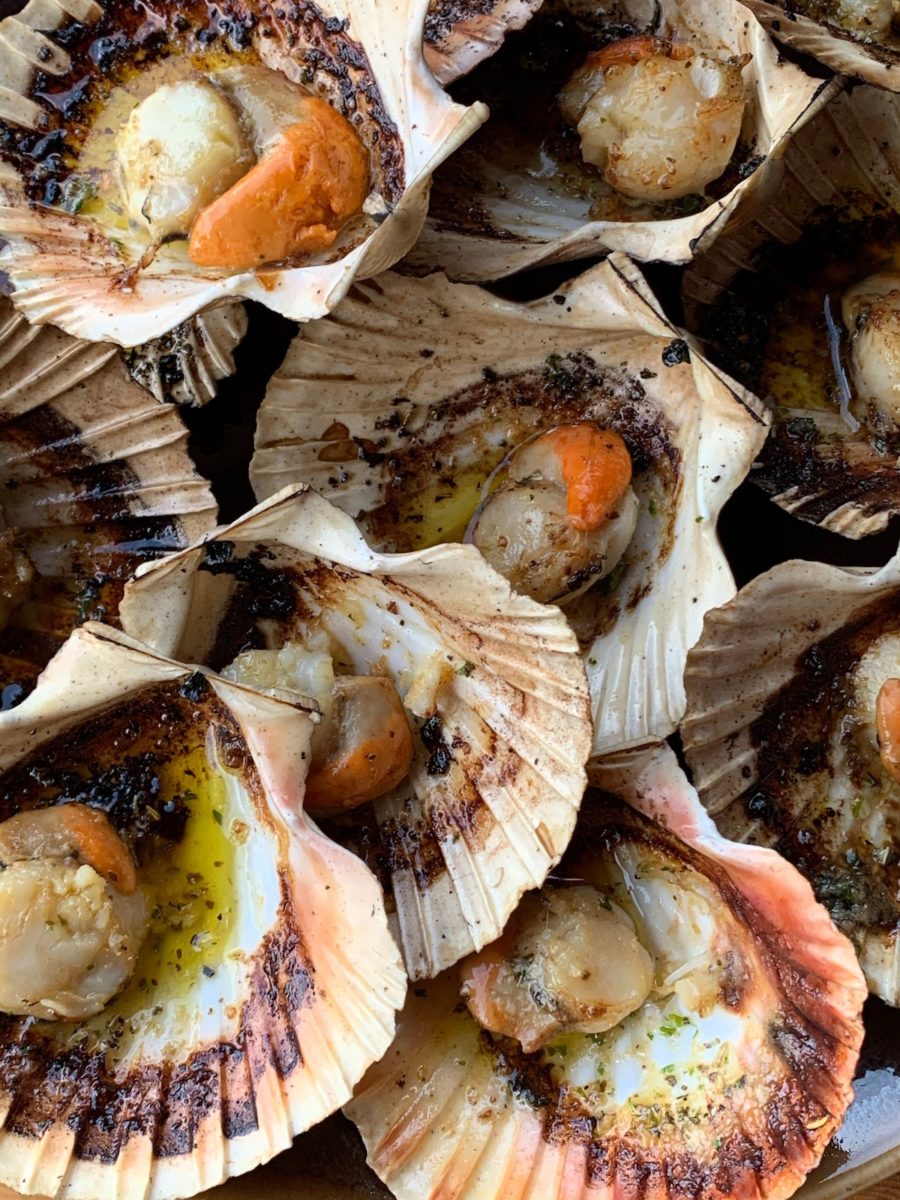 Carleeta finished the scallops with some local herbed butter. Heaven! 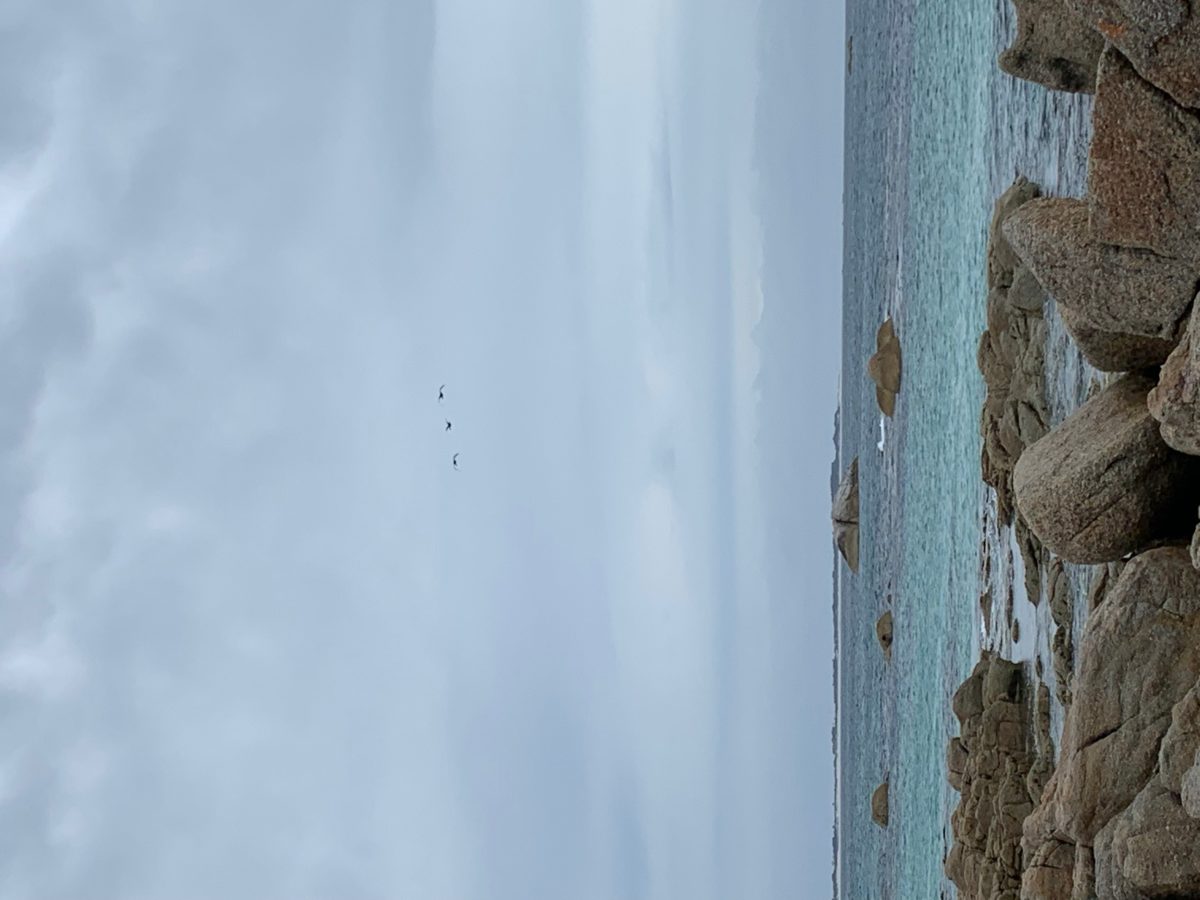 To harvest some of our fresh seafood for meals, Carleeta went diving in the sea. It’s a skill she learned from her dad growing up on Cape Barren Island.

Over the next couple days, I surprised myself with my eagerness to embrace Danny’s advice. I turned my phone to airplane mode and left it in my sleeping hut, along with a pair of massive black spiders that happened to be resting on my pillow. (I didn’t get much sleep the first night.)

“The best way to experience the bush is to stop, look, and listen.”

Instead of looking at Instagram, I launched into the freezing Tasman Sea and submerged myself in the stained glass waves. I watched Carleeta barbecue our dinners—including fresh scallops from shells the size of my hand, and mutton bird, a local delicacy caught on neighboring Big Dog Island. The birds eat only krill, and produce an oil that is meant to have rejuvenating properties. The meat was unctuous and tasted like fish. It was delicious. 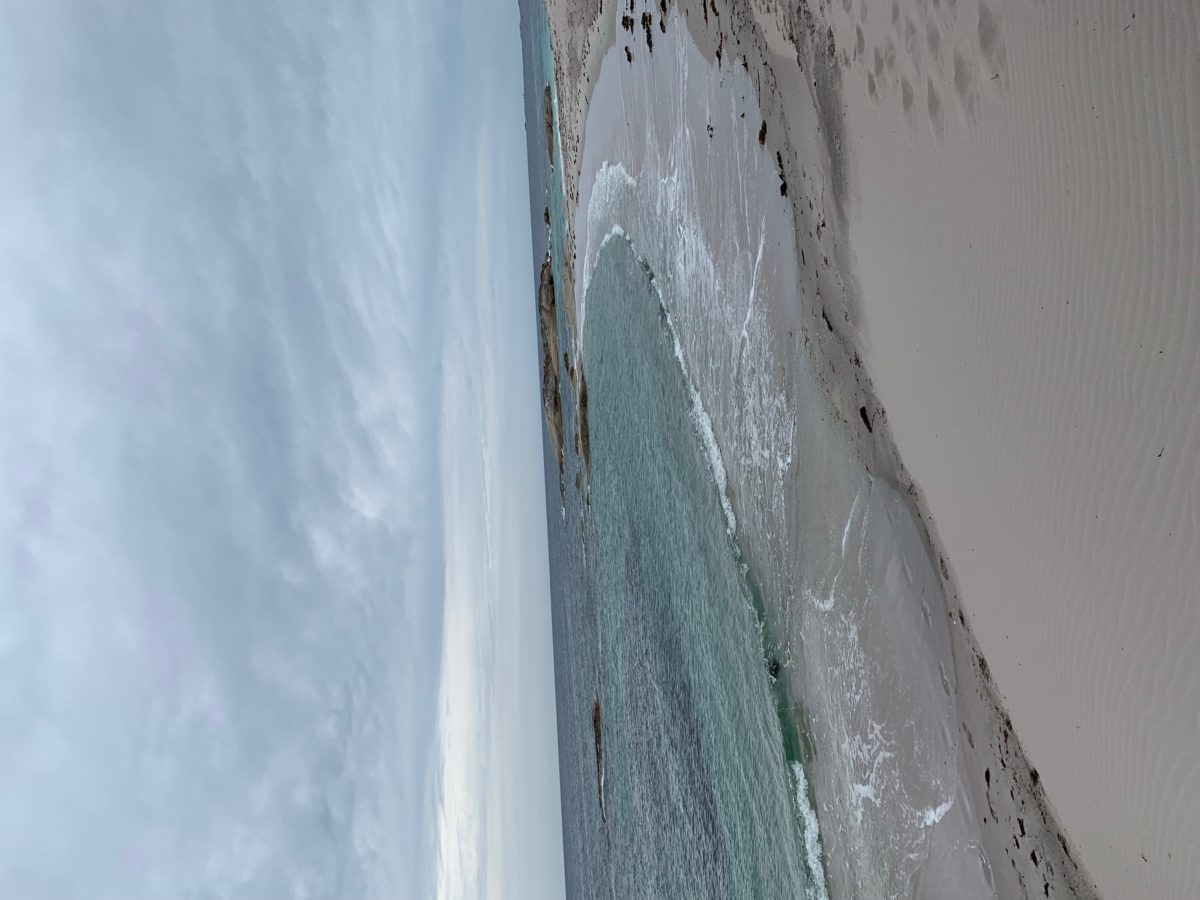 The second day of the Walk took place almost entirely on the beach, in search of the midden.

During the day, we traveled up the beach, trailing along the waterline and over slick, glistening boulders until we arrived at a midden. Tasmanian Aboriginal middens are archaeological sites, built from layers and layers of discarded shells, bones, tools, and other artifacts that provide information about how people lived before colonization. To the average beach-goer, a midden would look like nothing more than a buildup of detritus, but our guides know them to be sacred spaces.

We treaded lightly around the area, ogling at sharp tools and fractured shells. Carleeta paused with a few of us to tell a story about the women who once lived on this coast. Men were the traditional land-hunters, but women hunted in the sea; for generations they would dive, catch, and kill seals for eating and for fur, always mindful to not over-hunt or threaten the population. When Europeans arrived on those beaches, they used native women to teach them how to hunt before forcefully exiling them to Cape Barren Island, where Carleeta was born over 100 years later. Seals soon disappeared from these shores, too, and the population in this area has never fully recovered. 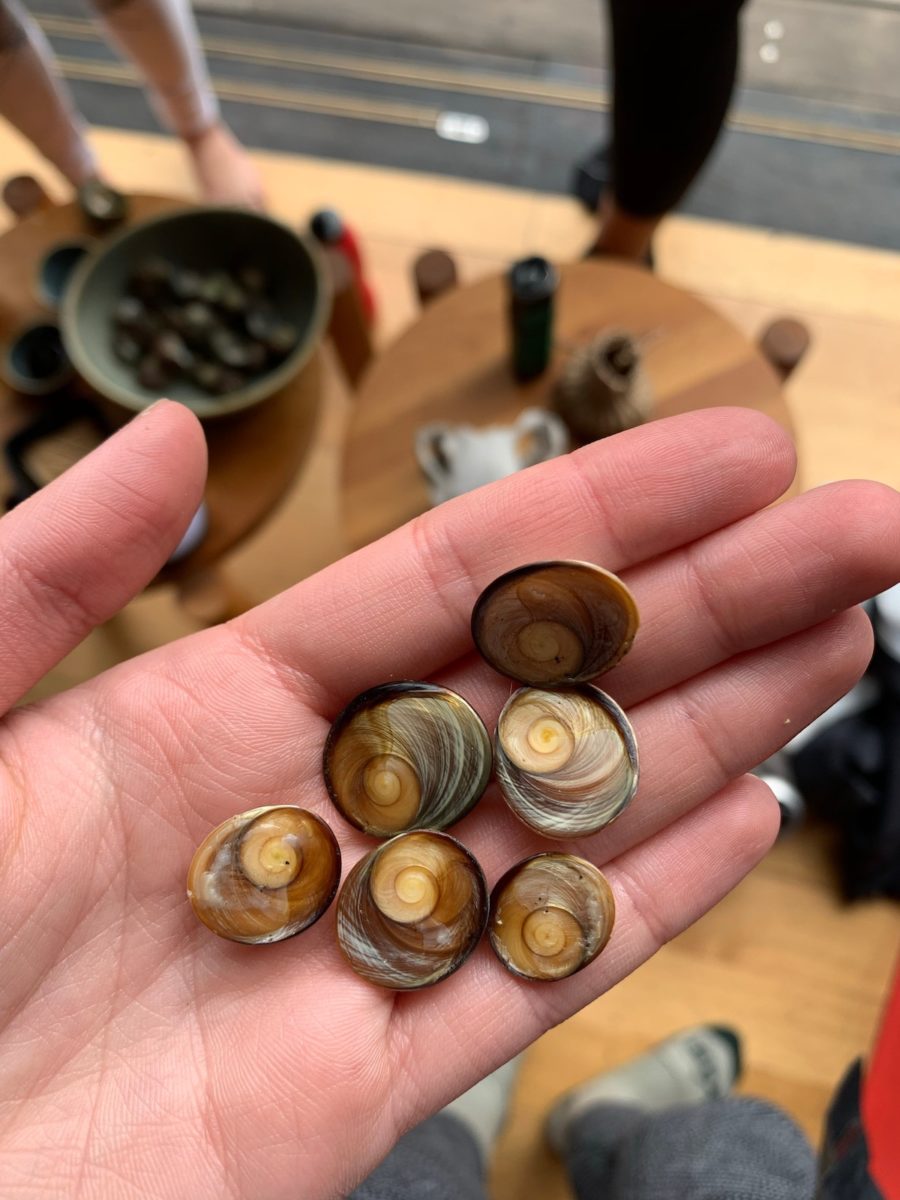 The “trap doors” of the warrener snails that Carleeta gathered and cooked for us got their name from the stunning pattern found on the inner base of the shell, usually invisible to the outside world.

As the only female guide, there are certain skills that only Carleeta can teach to guests, like the art of shell jewelry. When we returned to camp from the midden, we watched as she used a pin to poke perfect holes through the fragile outermost curve of the small shells. The practice of stringing them requires a precise amount of pressure and concentration, otherwise the iridescent spirals turn to gray powder in your hands. It’s the kind of patience that has to be cultivated over time.

“To the average beach-goer, a midden would look like nothing more than a buildup of detritus.”

When she first learned how to make the shell jewelry, she sat for almost an hour, silently observing elder Auntie Audrey. “My mum couldn’t teach me weaving and shells, neither could my nan, but I’m grateful that I’ve been able to regain that knowledge from the walk,” she said. Carleeta thinks it’s been difficult for the Aboriginal Land Council to recruit other young Aboriginal adults to come work with them because few people in her generation are comfortable exercising that kind of patience. She worries that fewer and fewer people at any age are accustomed to moving so slowly through life—even though it’s one of her favorite things about the job. 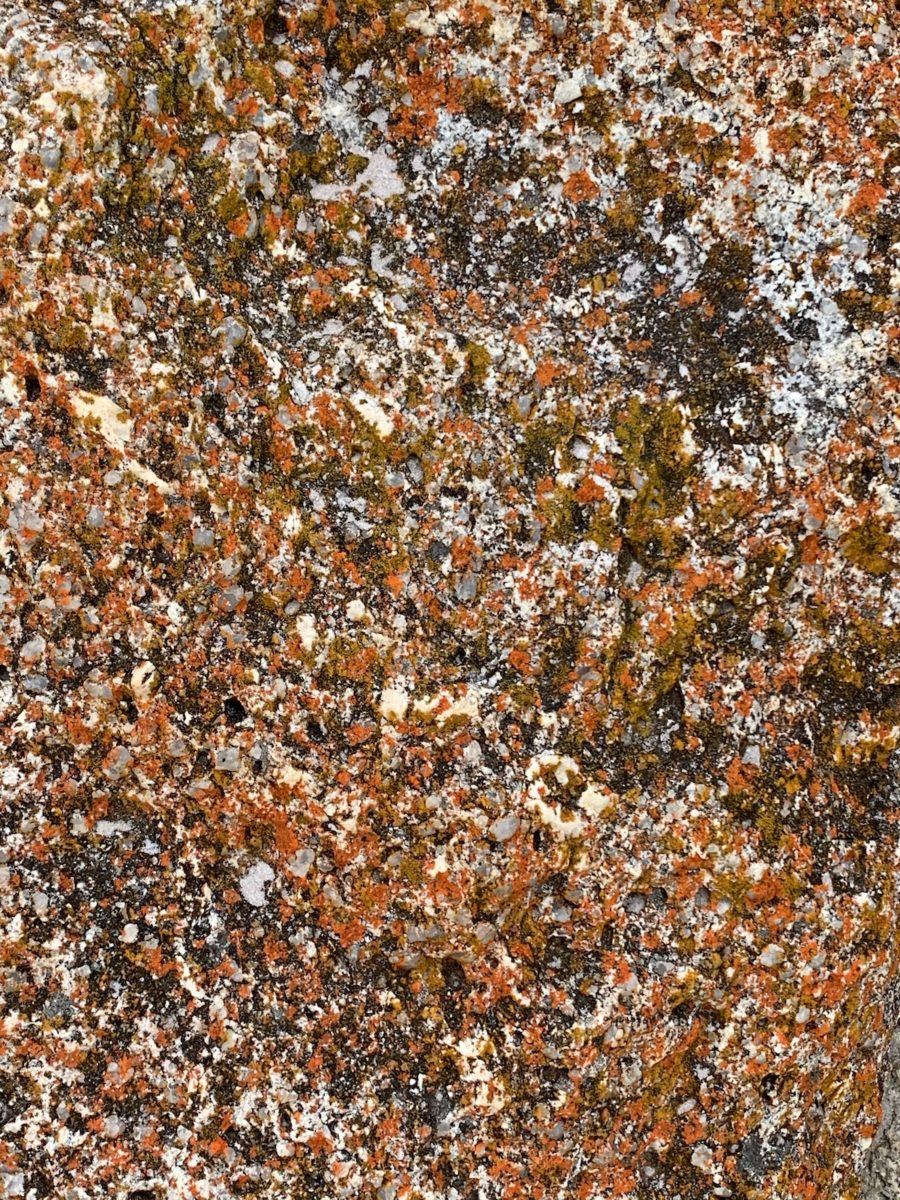 The pace of this trip allowed me to really observe the details and textures of the nature all around me.

“A lot of this generation is missing that; they don’t understand that we have so much time on our hands,” she says. “I find when people come out on that walk, how relaxed they feel when they don’t have a schedule. We just have all day long. We have from when the sun comes up until it goes down. And that’s what our people had, you know, they had all day and all night to be able to sit down, to talk and to listen and to practice their culture.”

I sat in this circle of women and watched Carleeta poke hole after hole before getting the nerve to pick up a needle myself. Carefully, I drove the sharp through the brittle, accidentally crushing several shells until I could better negotiate the strength needed to pierce the tiny object in front of me. The collective focus of the group was almost tangible, like I could bottle it and take it home with me. For a while, it was totally quiet, except for the wind in the trees and the exhale of our breath.