Erick Castro is the co-founder of Raised by Wolves and Polite Provisions in San Diego, California. Photo by Brogen Jessup Photography.
IndexEmma Glassman-Hughes

Experiencing beer burnout in the craft capital of the world? San Diego has a plan for that. Just as the beer options are diversifying, San Diego’s bar scene is undergoing its own renaissance.

Erick Castro, co-owner and co-founder of newly opened Raised by Wolves (winner of Imbibe Magazine’s Cocktail Bar of the Year 2019) and six-year-old Polite Provisions, says this is resulting in an assortment of cocktail bars impressive enough to stand up to San Francisco or Los Angeles—but with none of the ego. “The snobbery and attitude that you might get in another city would never fly here,” he says. “The city is way too down-to-earth to put on airs.”

Castro describes himself as a “Mexican-American from southern California who has been working in hospitality his whole life.” Outside of San Diego, he’s worked in San Francisco and NYC, and his beverage programs have been included in lists like Esquire’s The Best Bars in America and Food & Wine’s World’s Best Bars. As such, he’s an expert on the ins and outs of the burgeoning cocktail circuit. “Watching the San Diego food and beverage scene grow over these last few years has been one of the most rewarding things that I have ever had the chance to experience,” Castro says. “Whereas the beer scene has been world-renowned for decades now, it took a little bit longer for the food and cocktail scene to catch up.”

Here, the spirits aficionado gives us the low-down on seven of San Diego’s must-visit cocktail bars of the moment. 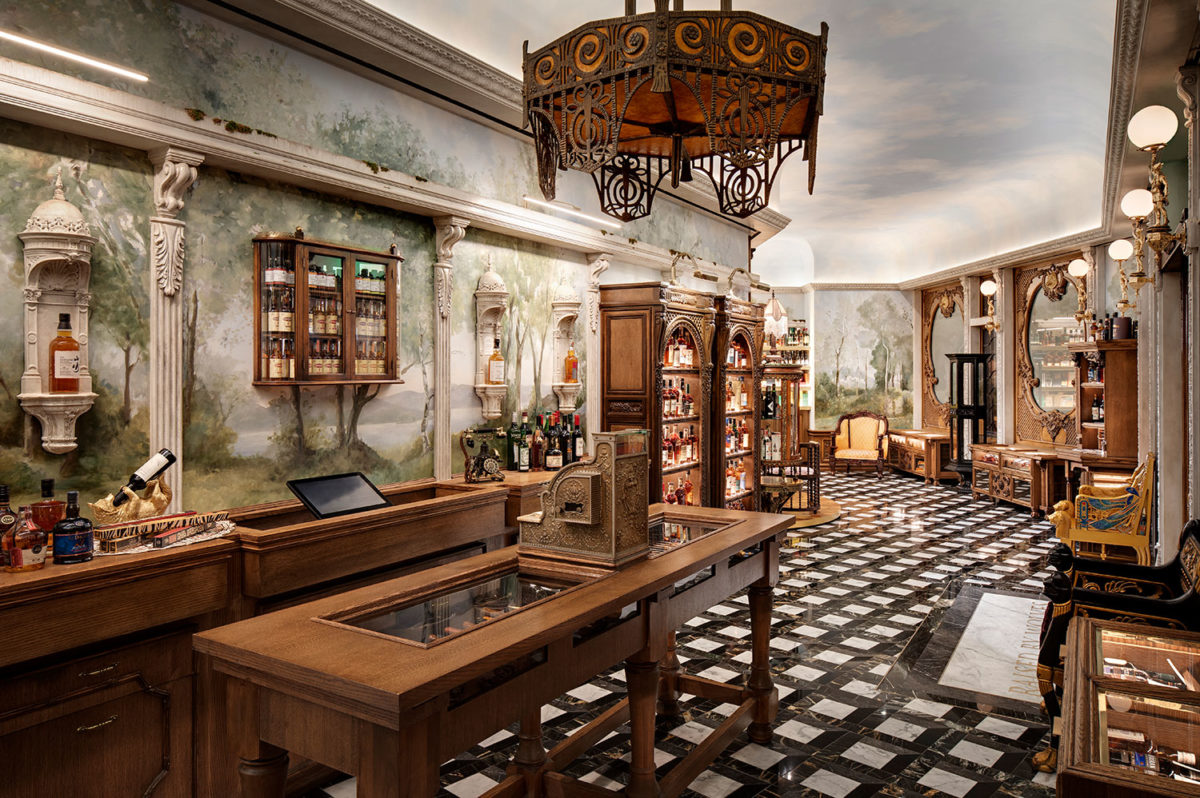 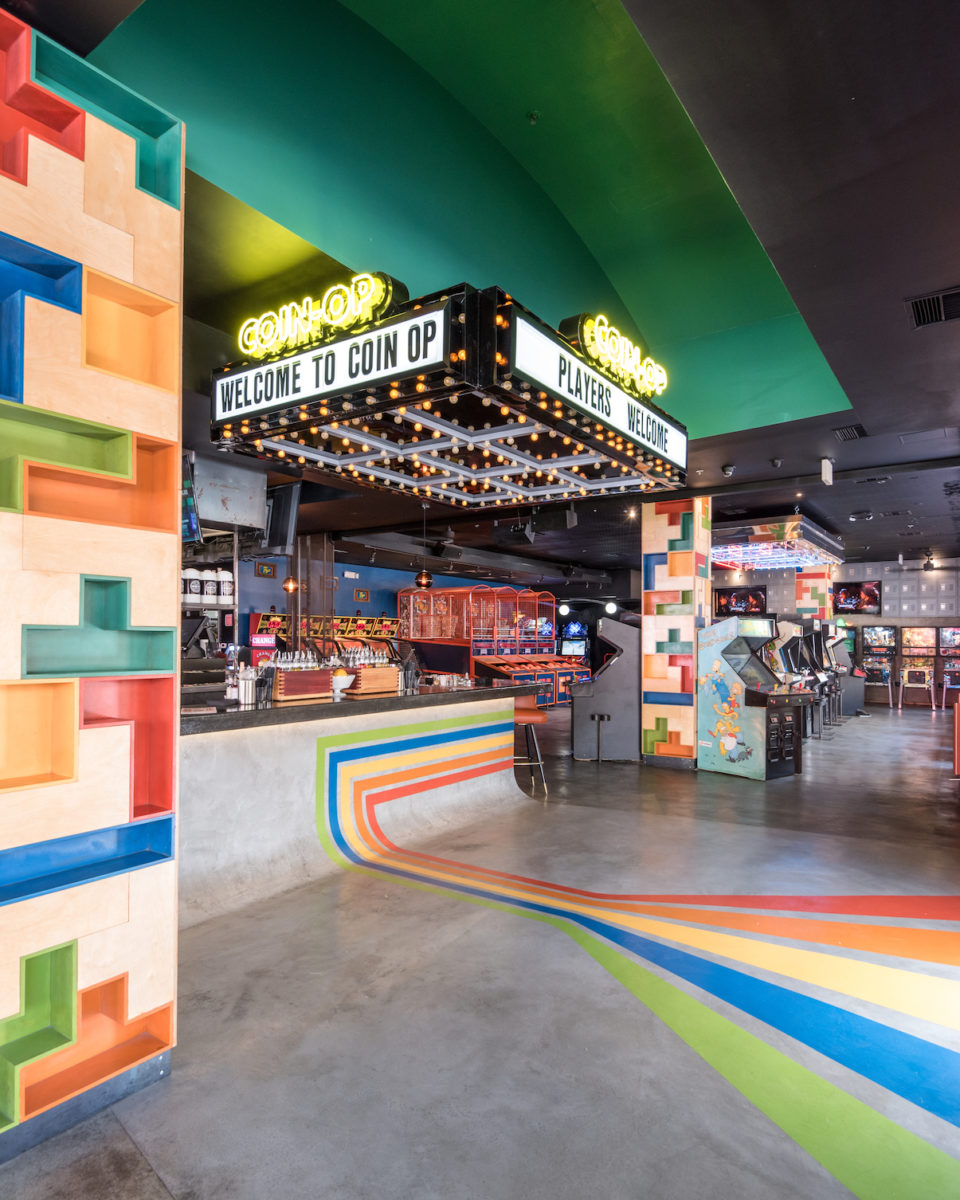 At Coin-Op, drink cocktails while you reminisce over retro arcade games. 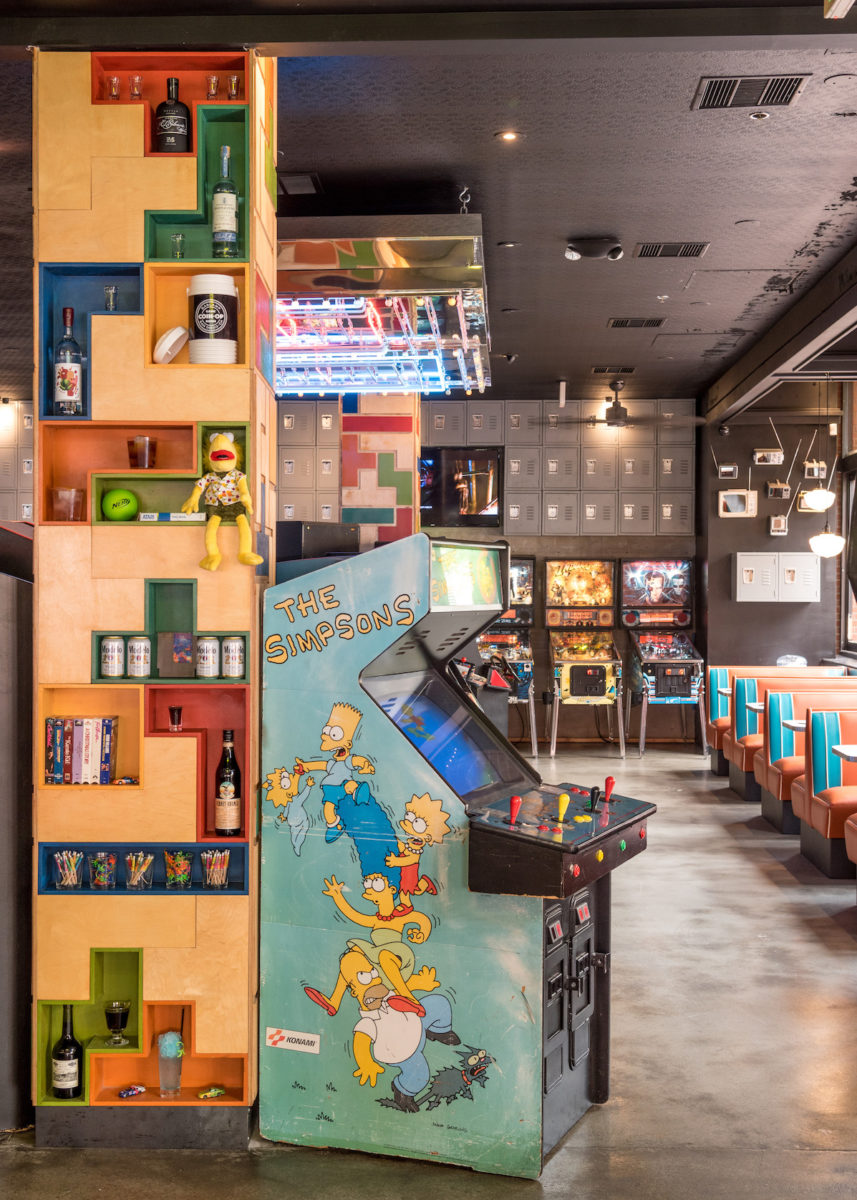 Even better: On Sundays, all games are free.

Small Bar
This place is a perfect neighborhood joint for killer food and beverage. The bar is helmed by a Polite Provisions alum who wanted to take top-tier cocktails to a casual environment alongside some pretty amazing pub grub.

Coin-Op
As someone who grew up a hardcore video game fiend, this place is perfect for sipping a tasty beverage while pumping quarters into your favorite retro arcade game. I recommend going on a Sunday when all the games are free to play. 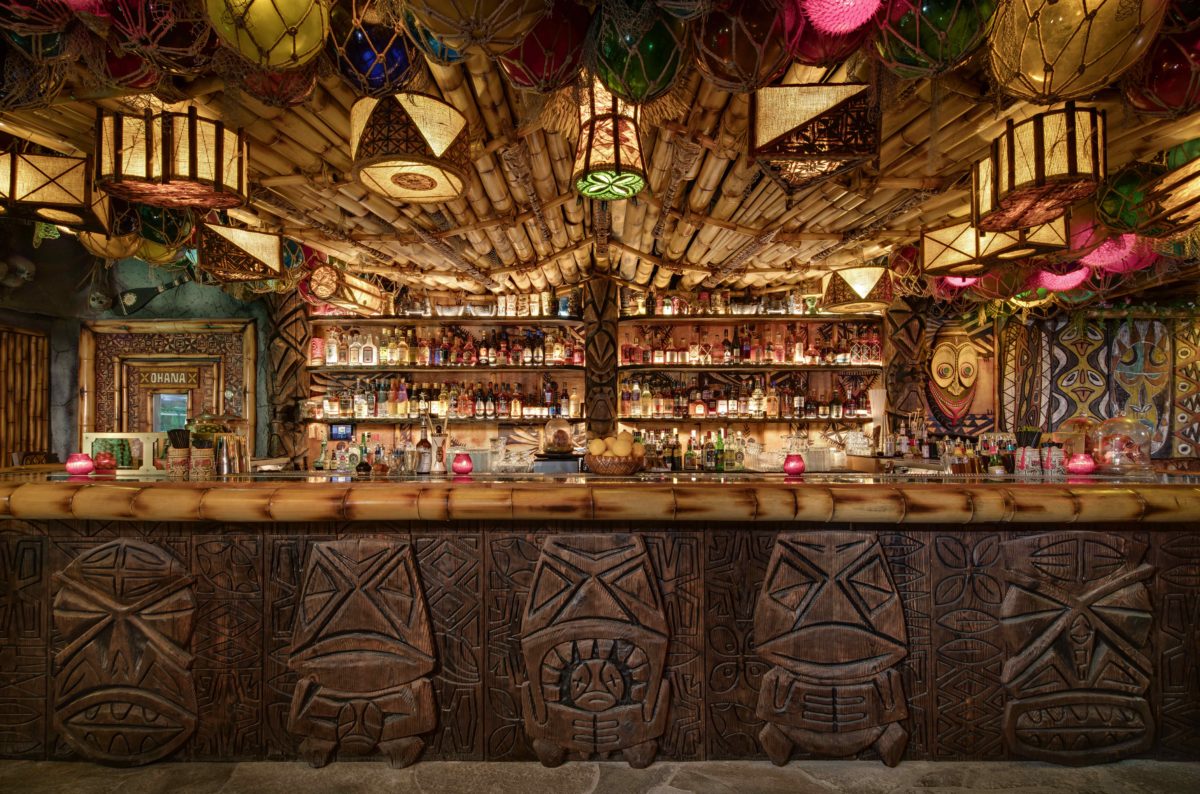 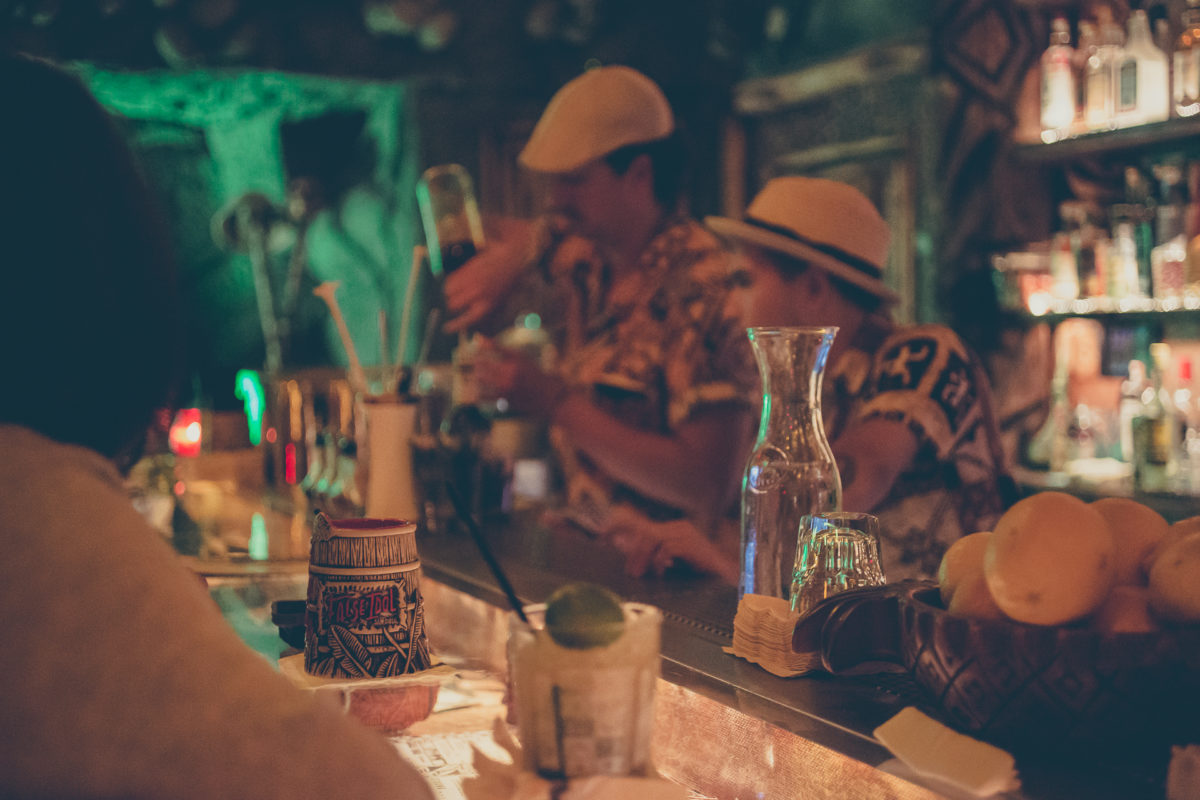 Visit for some of the best Mai Tais in town.

False Idol
I am a sucker for tiki, and on a warm day in San Diego, nothing beats a classic Mai Tai. Needless to say, this bar does them better than anyone in the city—and if that wasn’t enough, you are sipping your beverage while immersed in a tropical paradise complete with faux thunderstorms. 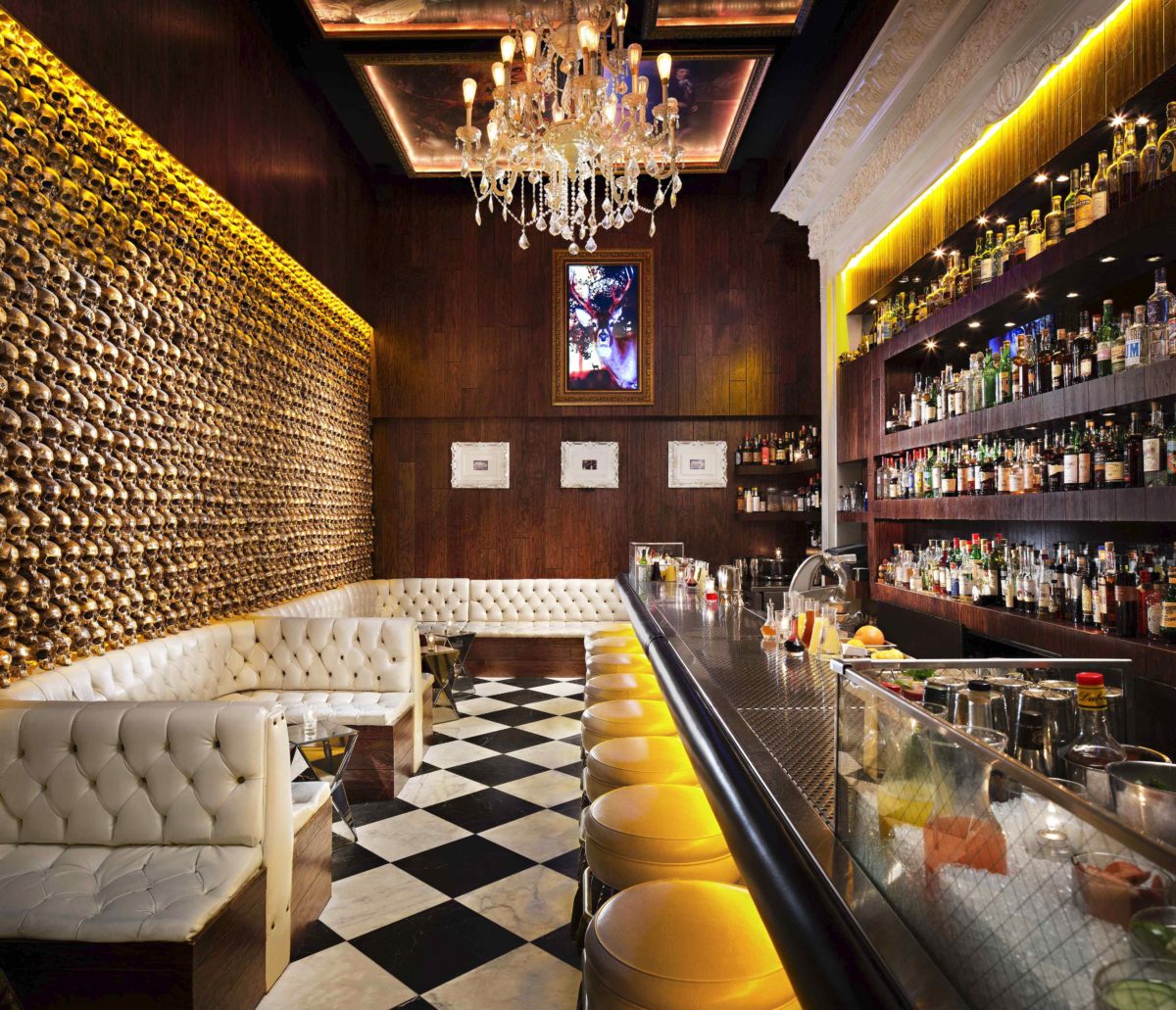 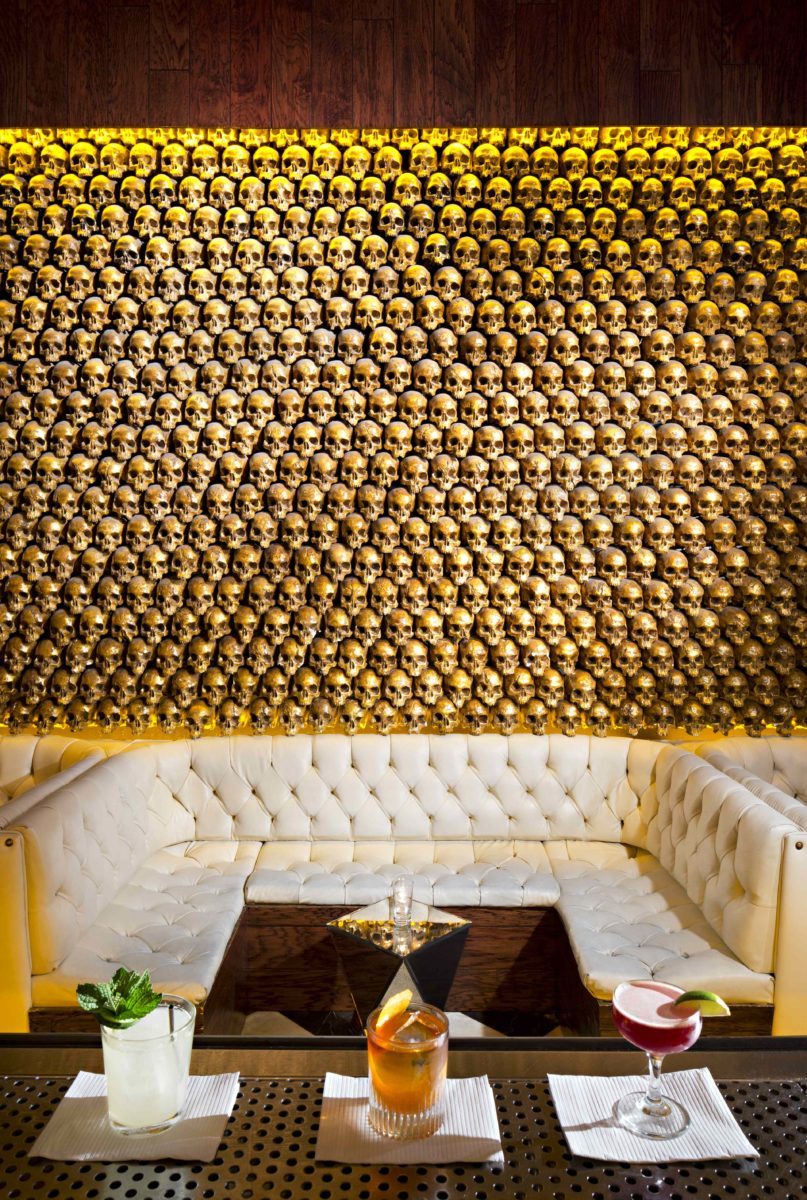 Here, a wall of golden skulls hovers above cozy seating. 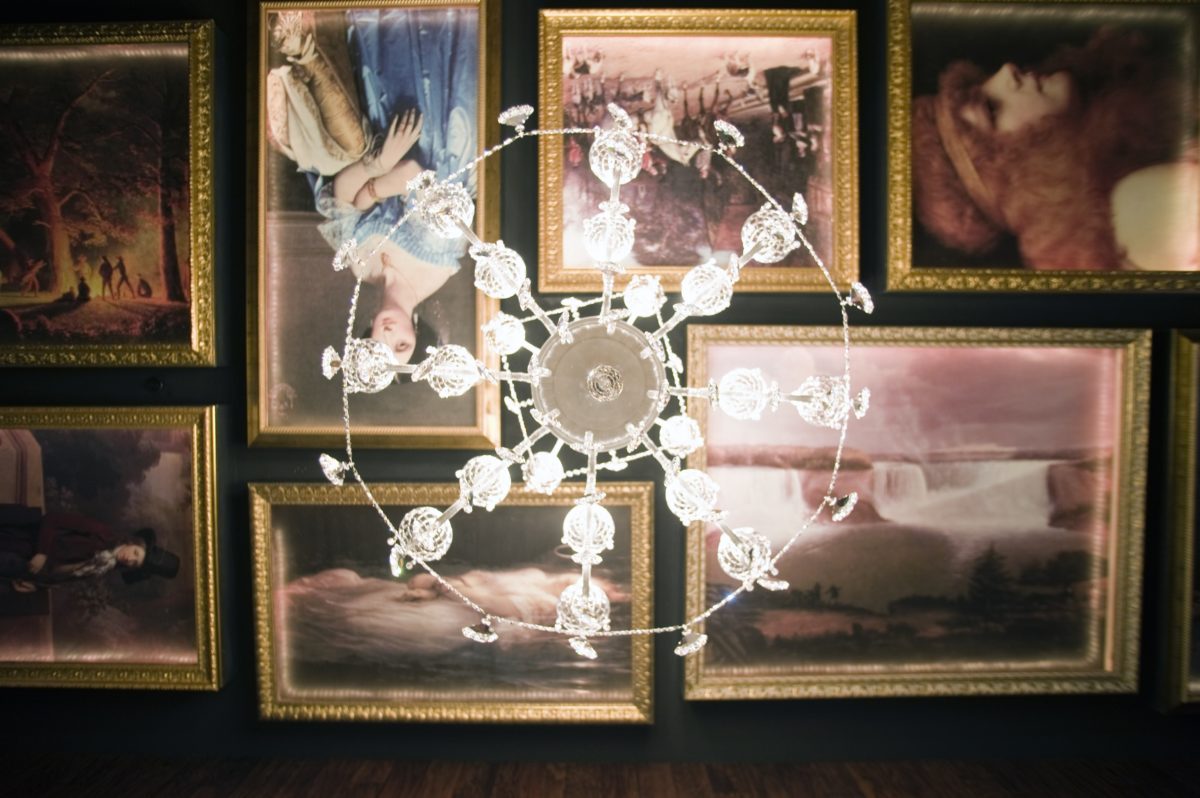 Look up past the chandelier to see a ceiling full of mysterious classical paintings.

Noble Experiment
You can’t mention a list of top cocktail spots in San Diego without mentioning Noble Experiment. It was the first bar in the city to truly launch a nationally recognized program, and after you visit you will know why. The drinks are perfect, the service is outstanding, and going into its 10th year, it is better than ever. 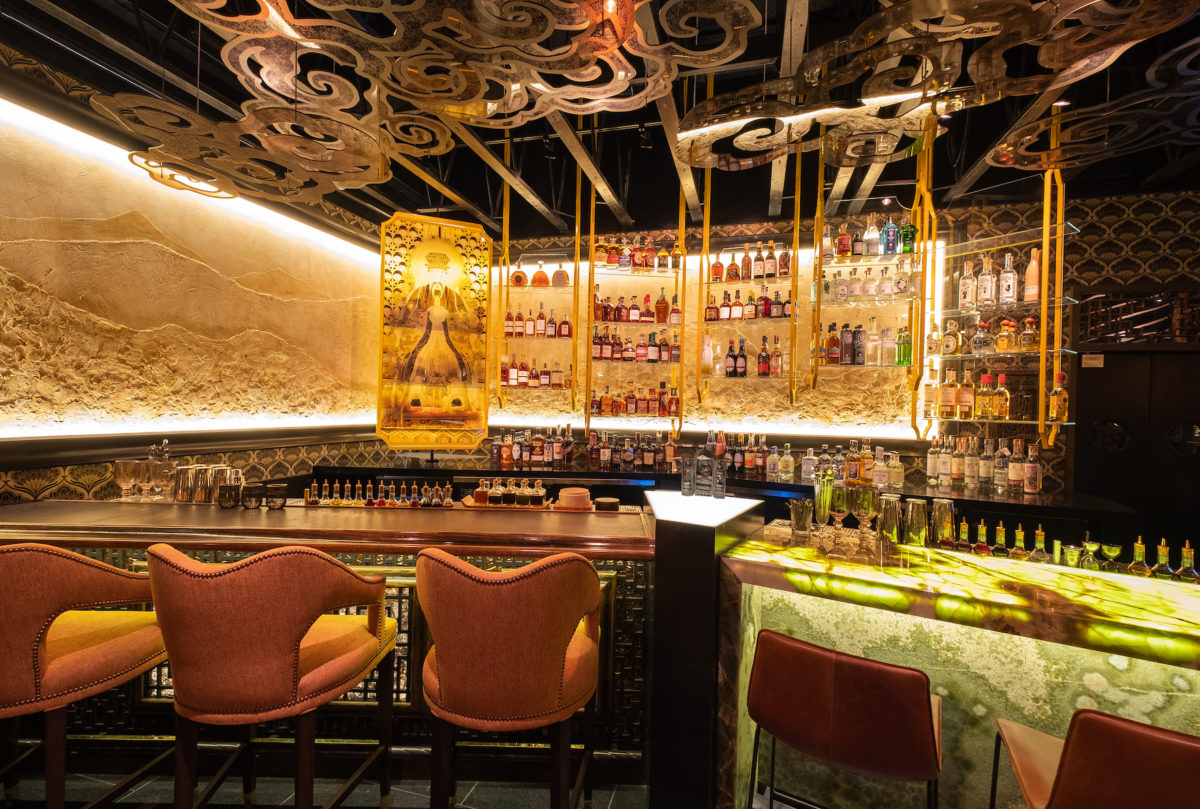 The glowing golden bar at Realm of the 52 Remedies. 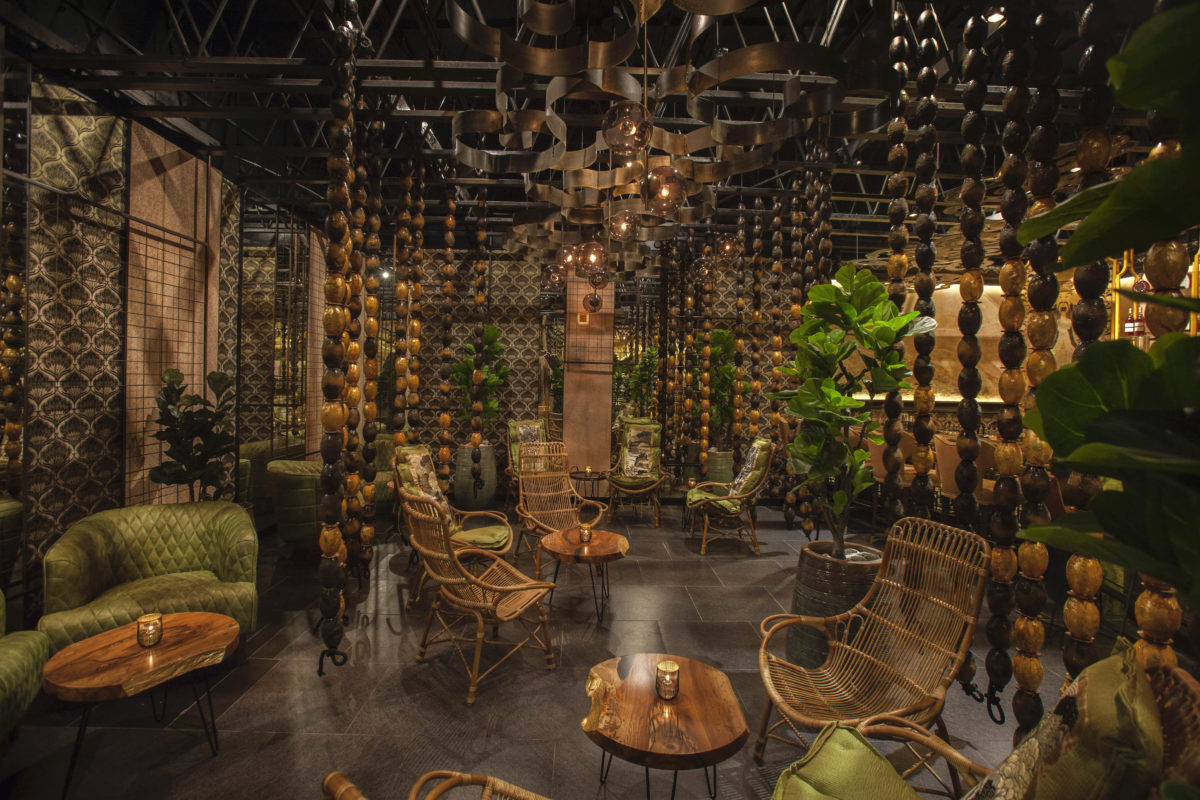 Realm of the 52 Remedies
This bar is the most recent addition to the list as it only opened last year; however, it quickly created a niche for itself with its atmosphere, vibe, and showcasing of Asian ingredients. It is the perfect date spot for intimate after-dinner drinks. 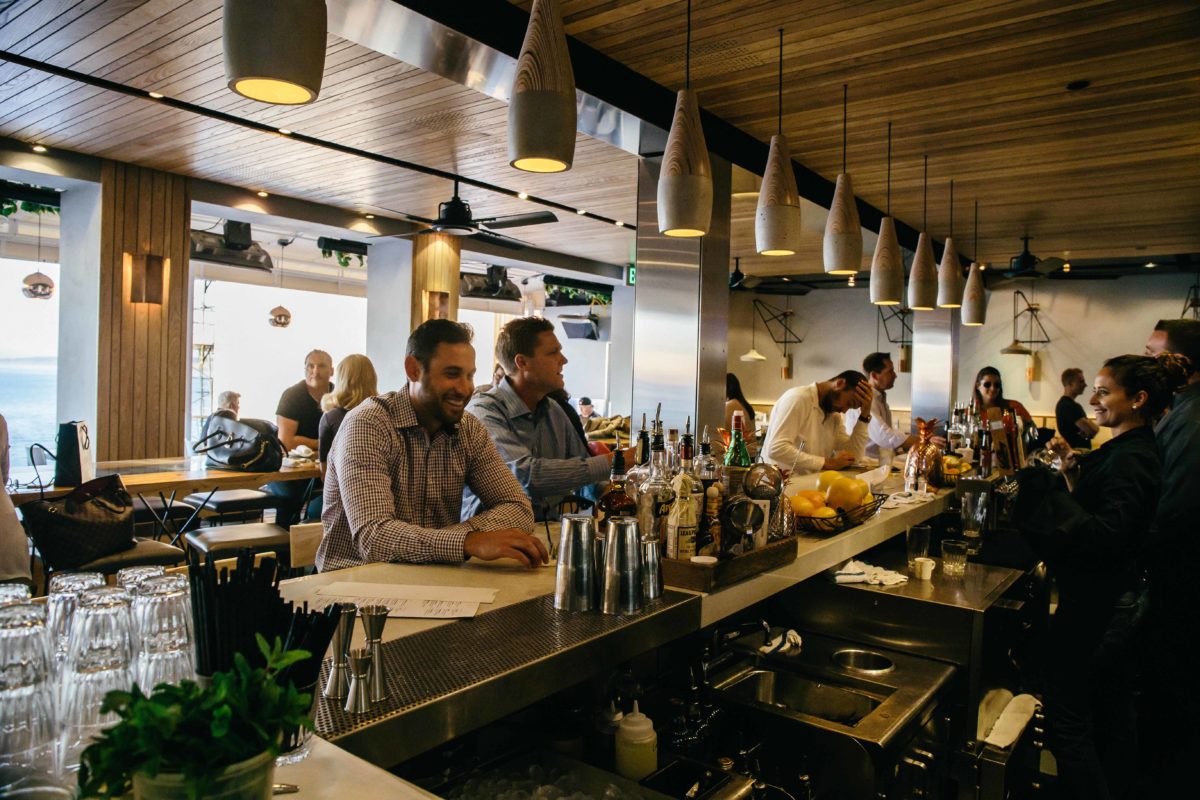 Stop in for a drink at George's at the Cove's Level 2 bar. 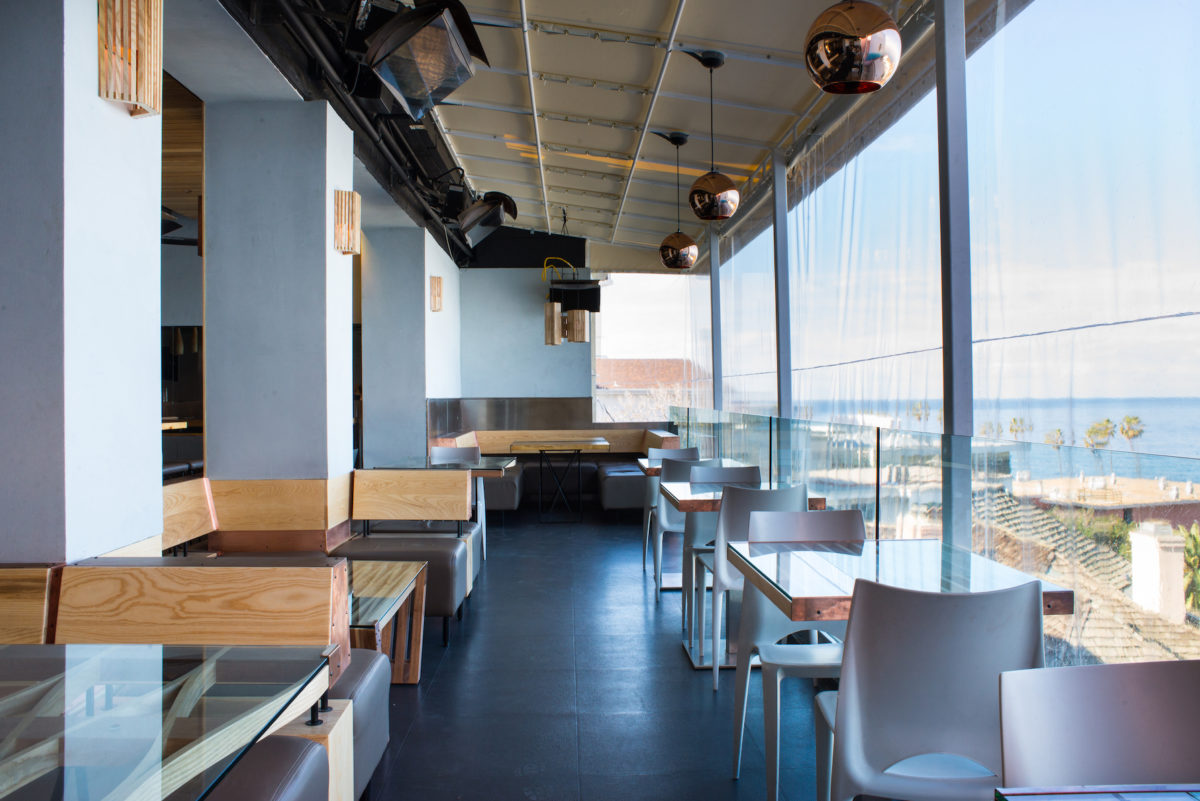 To one side, a warm and laid-back bar scene; to the other, sweeping ocean views. 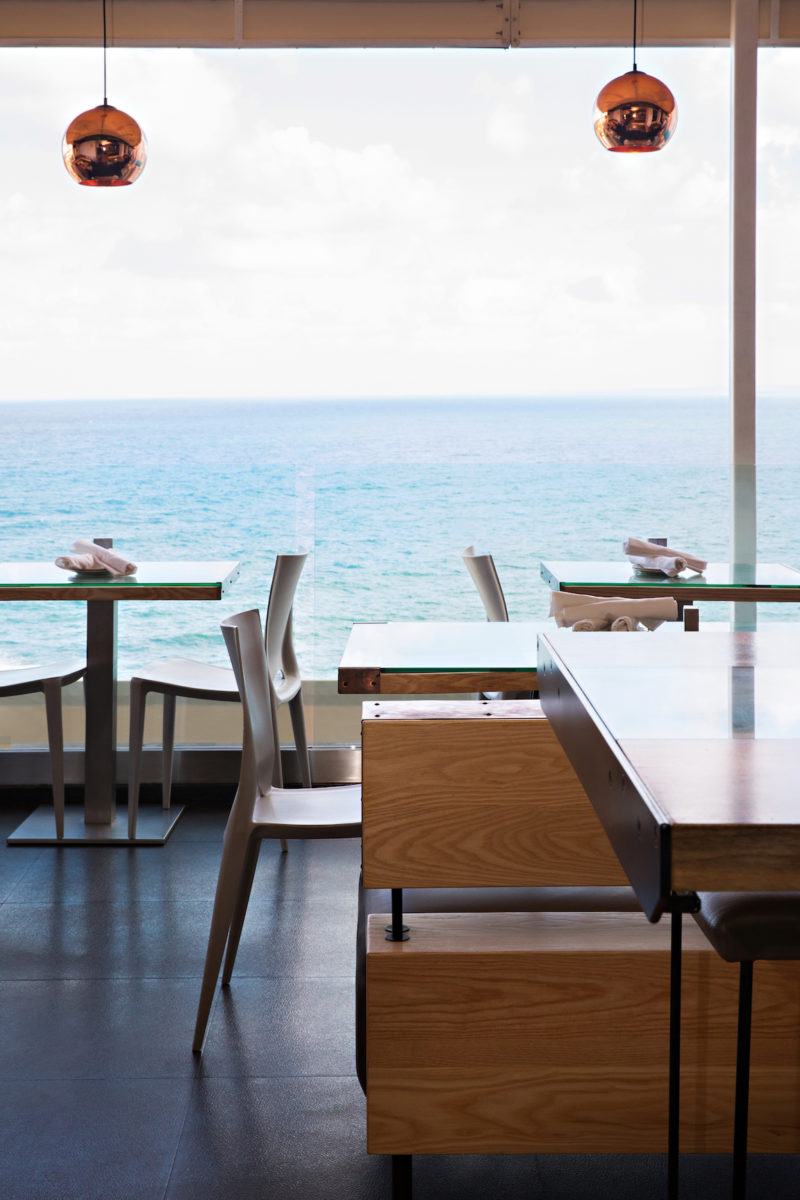 The full view from Level 2.

George’s at the Cove (Level 2)
When it comes to enjoying a cocktail from a breathtaking view, there are not many bars that can even come close to this. Here you can drink an impeccably crafted Negroni while watching sea lions frolic in the salty waves of the Pacific. You simply cannot beat it.

Kindred
This bar is quite possibly the most unique cocktail bar in the state, if not the country, in that it is a death metal, vegan, craft cocktail spot. It is definitely not a place that you have seen a million times already. The food is top-notch, as are the drinks. My favorite time to come is for brunch, when they have all of the windows open and the sun is shining.