Hyper-minimalism may be in vogue these days, but you’d never know it by stepping into the ground-floor Bushwick home of stylist, model, artist, and influencer Jaraé Holieway. In every direction, you’re treated to different colors, patterns, and textures—from the avocado green carpet to the couch bathed in a gold throw and fluffy pillows, and animal print tapestries hung elegantly on the walls. Along with the light clinking of bangles on her wrists, Bobby Womack and Beyoncé throwback jams hum in the background. And while overpacking may go against traditional travel wisdom, one look at Jaraé should tell you that this is a lady keen on breaking rules. Somehow, she fits frequent travel between her hometown of Long Beach, California and her adoptive home in New York amidst increasingly demanding features for publications like Vogue and Refinery29, as well as her own shoots on weekends. Below, Jaraé discusses what we’re calling her “pre-apocalyptic” packing style, where seemingly nothing gets left behind. Enter the mind of a stylist: prepared for any wardrobe malfunction, thinking of solutions to problems before they arise, and living life in vivid color.

“It’s crucial to make sure that my clothes are set and steamed.”

I have a long list of essentials, starting with my vintage traveling bag that I put all of my jewelry in. I travel with so much jewelry—sometimes my complete Carry On will just be accessories and jewelry. The TSA at the gate will look at me like I’m crazy and I’m like, ‘I swear, this is just what I do, I promise.’ It’s important for me to have a hard case for all my stuff because I travel with very delicate vintage and I don’t want anything to get tossed around or broken. I got this case at Buffalo Exchange, where I used to work, and I love it. Another essential is my steamer because, as a stylist, I need this on set—it’s crucial to make sure that my clothes are set and steamed and not wrinkly. My Beats headphones are my saving grace, especially living in New York where I’m like, “please don’t talk to me.” My hair pick is also very essential. I generally bring a fan and I wear like a thousand sweaters and then use them as pillows, just because when traveling it’s either way too hot or way too cold. 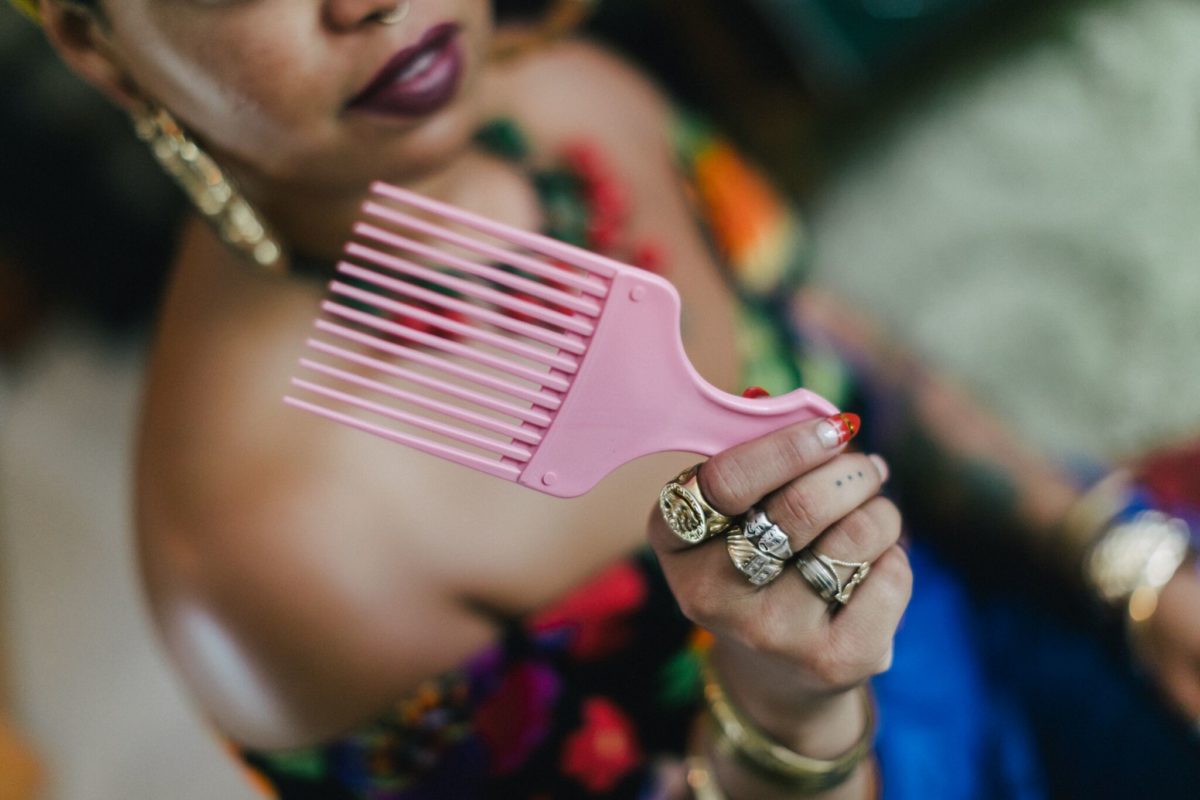 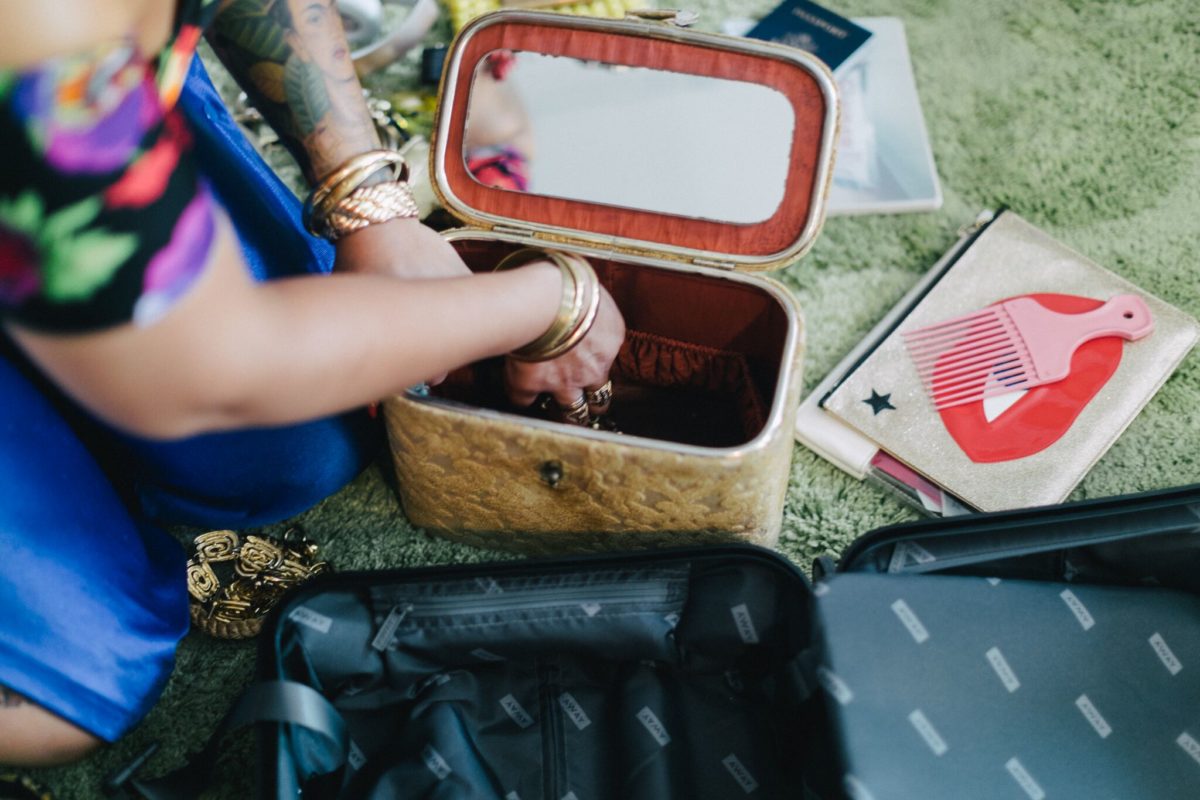 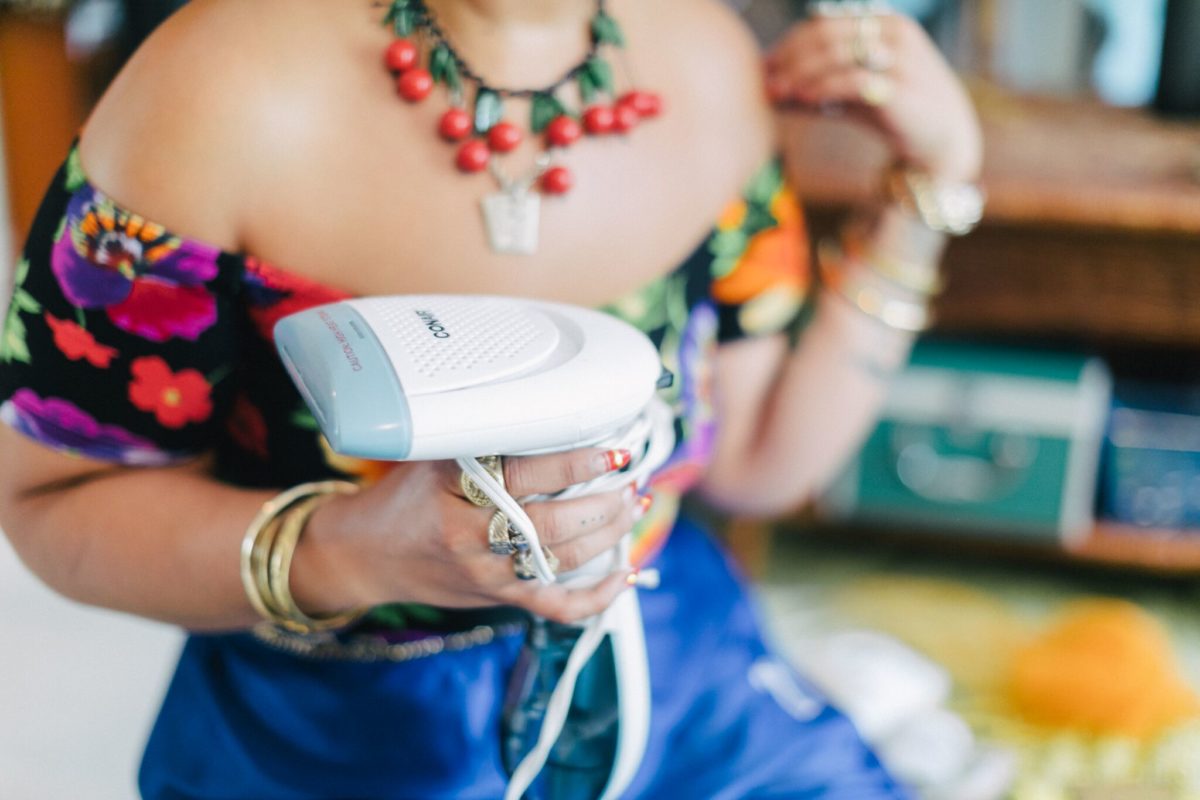 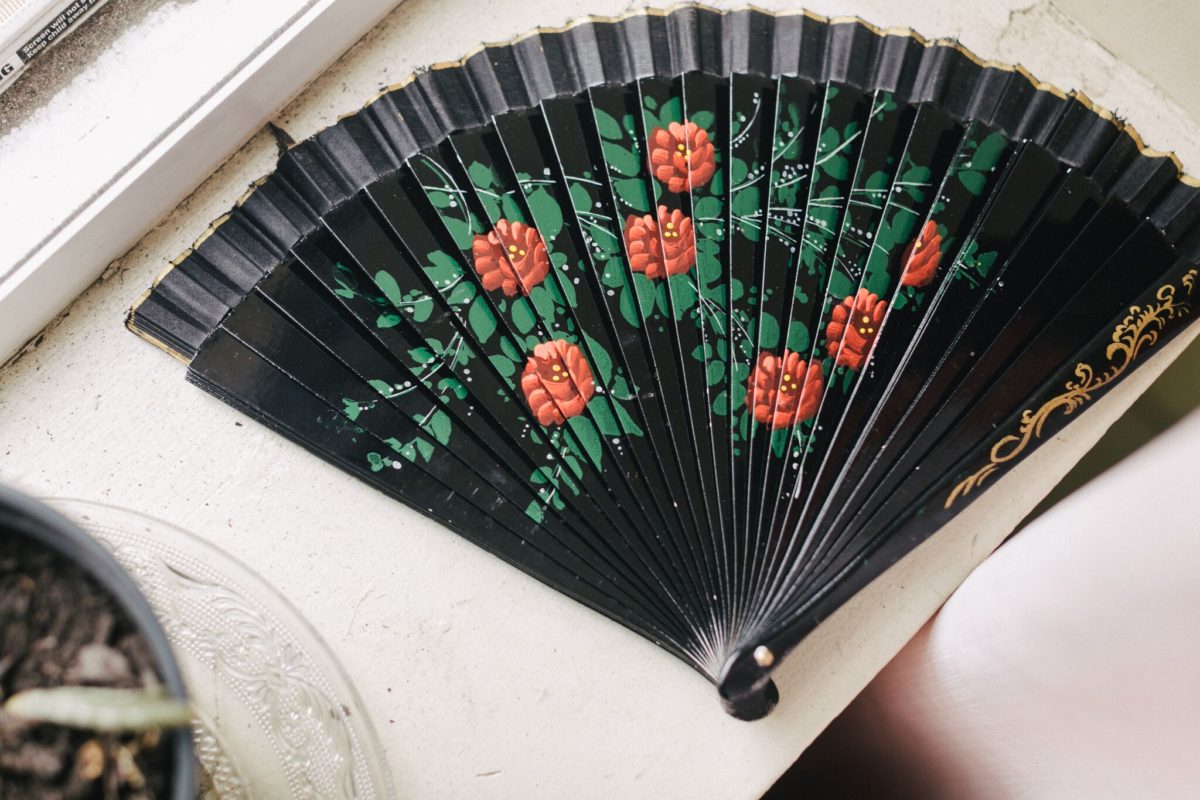 “I carry my whole life with me.”

I have bags filled with all my styling tools, like a measuring tape and clamps, safety pins, scissors, a mini sewing kit, pens, all that good stuff. I like to carry a million pouches because I’m a bag lady, and I always need extra bags for everything, so I carry them inside my Carry On because you never know. I carry my whole life with me—I need one of those bags from Harry Potter or Mary Poppins where you can just throw everything in and have it disappear. But if I’m traveling and I end up buying vintage, it’s important to have these things on me, in case I end up flying home with something and I need to know measurements and sizes and stuff. I also believe in having a second option for everything, which is why I carry two pairs of shoes, two pairs of earrings; I try to do things in twos just because I never know how I’m going to be feeling. It’s always about being prepared for the unexpected. I pack for what I would need with me if disaster strikes, but in that case, I’d leave the steamer. 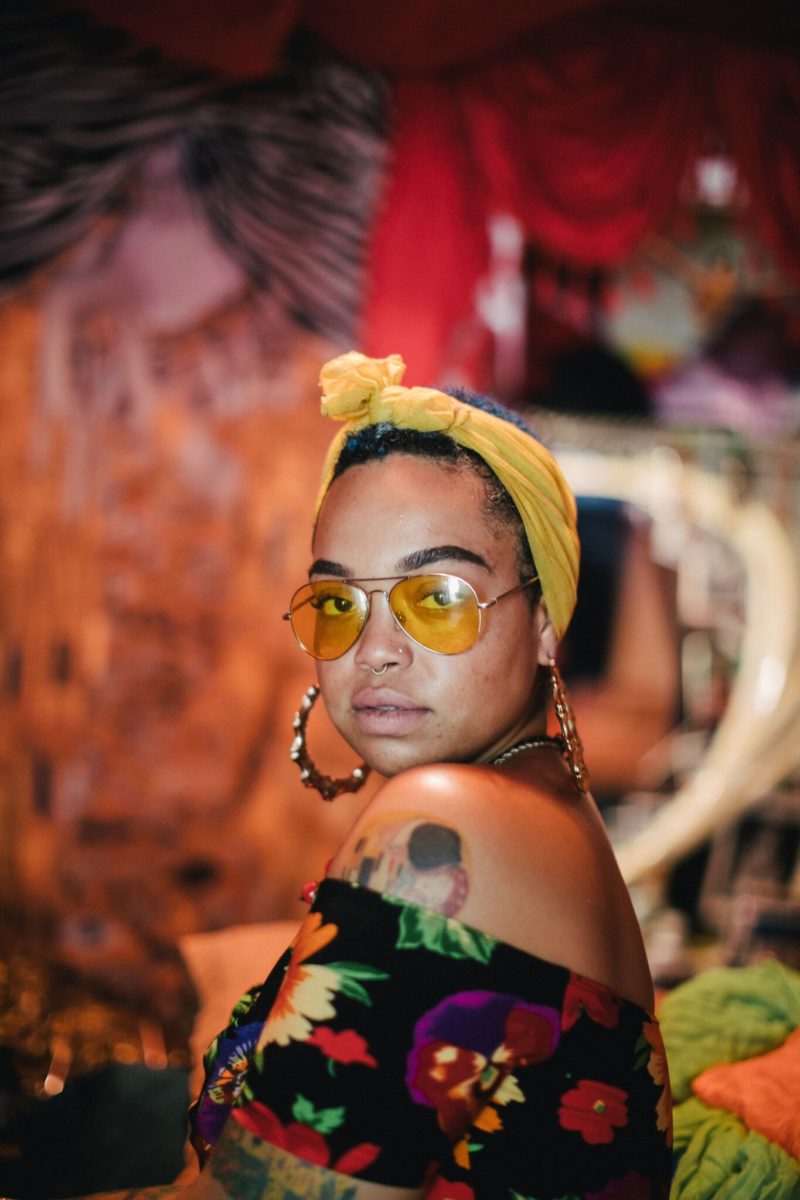 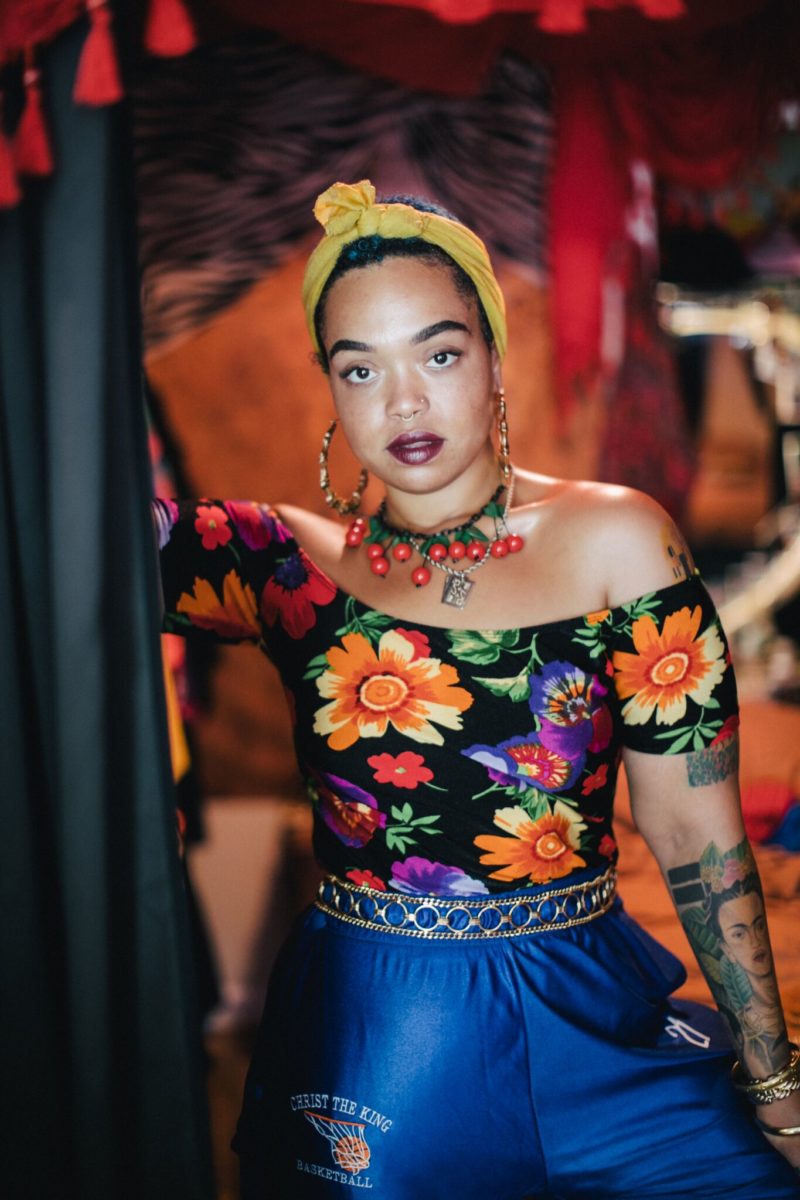 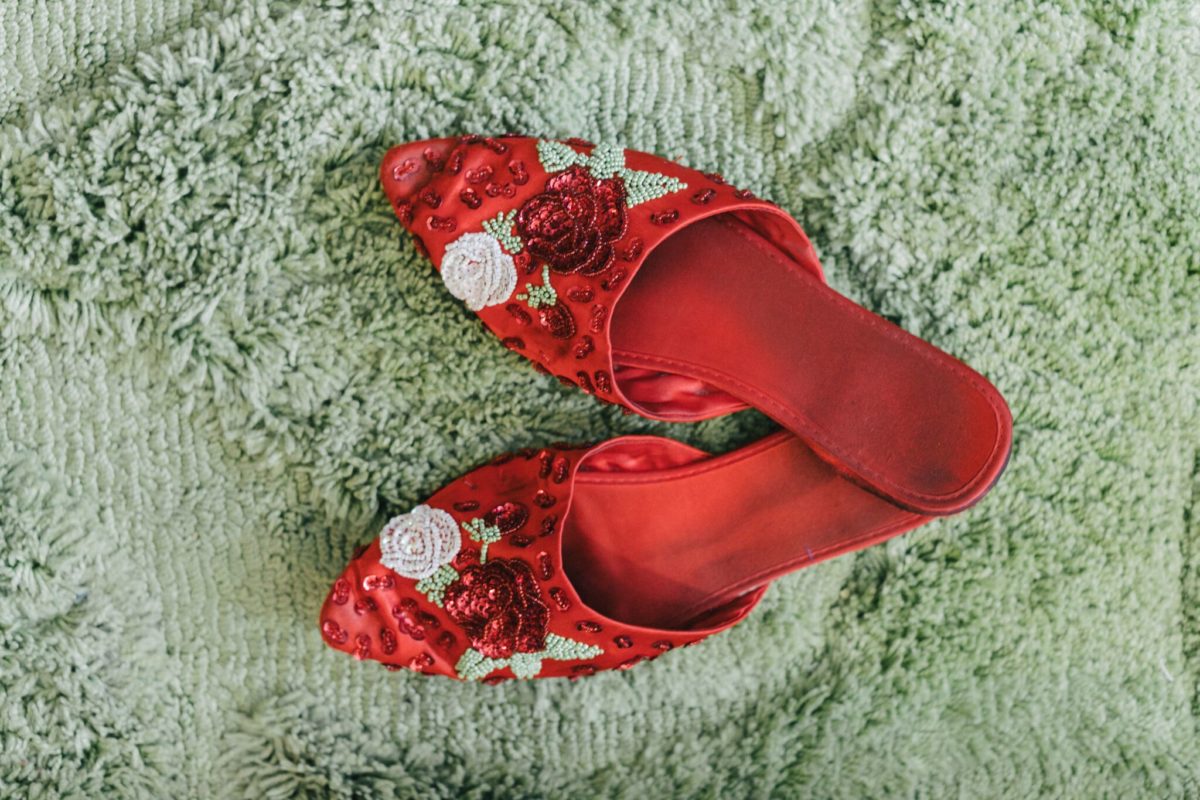 “Being in New York, you have to pack for the day.”

Going back and forth between coasts means that you need to have this flexible mindset where you can pack for different climates, which obviously means that I have to pack more stuff. I’m known to carry a thousand of my belts all at once. I have all these chain belts in my bag, which is something else that TSA looks at me like I’m crazy for, and I’m just like, ‘it’s fashion!’ But in general, I want to always be prepared for everything and I apply that philosophy to my daily life. Being in New York, you have to pack for the day—you have to be prepared for anything, because if you live in Brooklyn and you’re going all the way up to, like, Midtown, or higher, you can’t just go back down to Brooklyn on a whim. It’s like I still have to pack as if I’m going on a trip across the country when I travel throughout Brooklyn and Manhattan for work because this city is so big.

“Traveling with hats is so hard.”

I like to travel in key pieces like a long, flowy dress with a lightweight jacket and pants because both outfits are comfy and so versatile. I usually feel super bloated on planes, so dresses are perfect; but after I get off, I never know where I’m headed so it’s nice to have an accessible outfit to change into. For clothes, I roll them up and stick them on top of everything, versus putting them on the bottom, just so that they can help protect any of the stuff that I have that’s fragile, like sunglasses, lipstick, jewelry, etc. All in all, I generally do a Carry On, a personal bag, and like one to two checked bags. Also, I always try to make sure that I have a beret for every outfit. This little compression compartment in my Away suitcase is actually quite amazing for that—this has become my beret pocket. But in general, traveling with hats is so hard; like, my mom has tried to get me to travel with hat boxes, and it’s definitely cute, but maybe something to think about when I’m, like, way up there and I have people carrying my bags for me at the airport. Not when it’s just me. 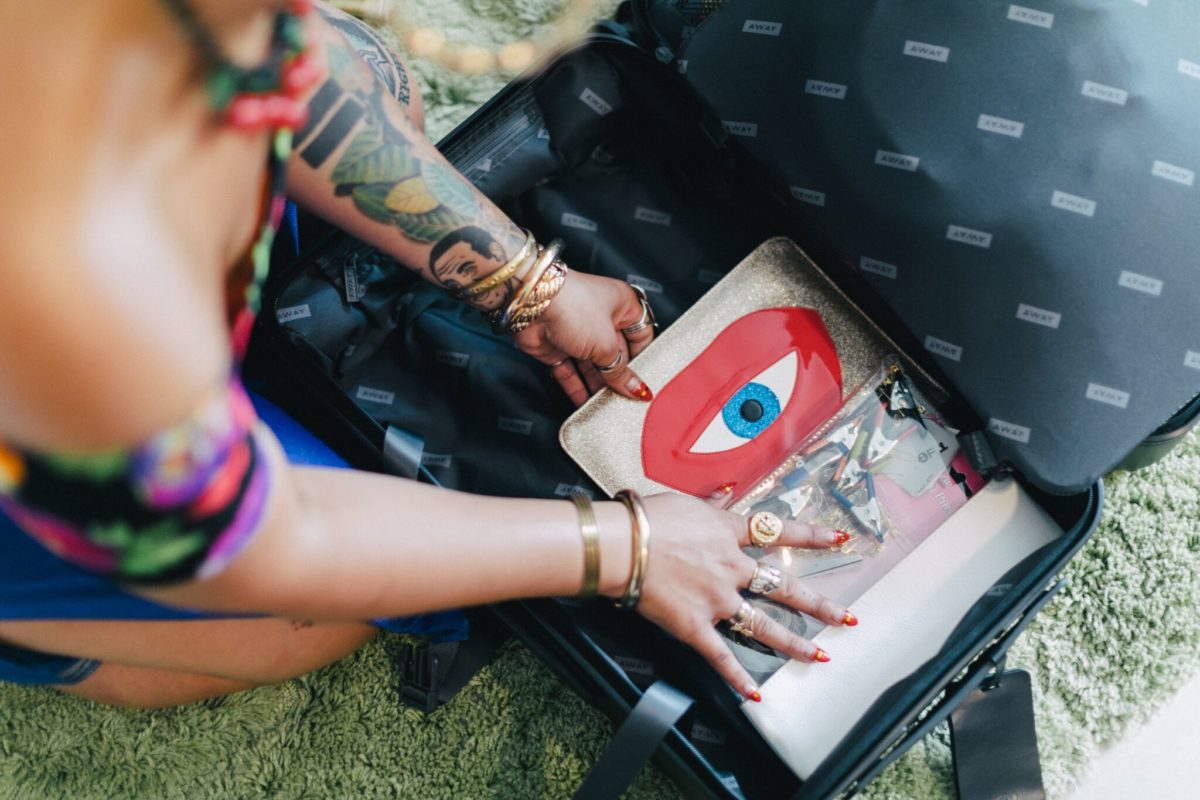 “Style is something that you develop over time.”

Hats are my favorite thing to accessorize with. Berets, though, I’ve always associated with something like a uniform—they’re very military, very strong, they’re also associated with the Black Panthers. I started with this one red beret that my mom’s cousin gave me, and I realized that I hadn’t seen anybody wearing berets yet, so I decided that I wanted to give them a try. I wore this red beret with everything, and it became my favorite hat, which is when I realized that I needed one in every color, to make it my thing; like, I’m that girl who wears a beret coordinated with every outfit. Eventually, just having this hat in all these different colors became like a uniform for me, which is when my style really started to come together. That’s the difference between what makes style style and not just fashion. Anyone can open a magazine and find something and wear it, and that’s fashionable; you’ll be fashionable and trendy. But style is something that you develop over time, and there’s always a consistent element, which for me is my berets. They represent strength mixed with glamor—I feel empowered, classy, and sexy at the same time. Berets serve all of that at once.

“I want to encourage people to explore more with color.”

The way I get dressed day-to-day is based on colors, and how I feel. It’s just like, ‘what color do I feel today? What’s going to make me feel the most vibrant?’ I like to have such a variety with me because my outfits are dependent on what I’m feeling day-to-day. Having a rainbow of a wardrobe is important to me. Especially living in New York, the lack of color that I see makes me so sad. I don’t think most people take into account how much of an effect color can have on them. Lots of people love their whites, and neutrals, and blacks, but as a stylist I want to encourage people to explore more with color in their wardrobes because you never know what you might love. That’s what fashion is all about: finding and exploring new things and making them something that’s comfortable for you. Clothing is very, very expressive; I just want people to tap into the things that make people really happy about themselves and then apply that to what they wear. For me that’s color, because I see everything in color—I’m an artist and color makes me really happy. But for other people, they’re more of a sneaker person or a shoe person, and that’s their starting point for building a style. So yeah, I don’t know, just forget the rules that all those magazines have put out there and just do your own thing. Wearing color brightens everyone’s day. Just think about the 90s when people wore colors! People were so happy and carefree!

“I’m a firm believer in supporting smaller businesses, and I reduce, reuse, recycle.”

What I’ve learned about other stylists is that a lot of them will just put their clients in expensive, fru-fru stuff just because it’s attached to a designer or a brand, but to me, the most important thing as I style clients is that I want them to feel good. I want them to look good and feel good, and understand that they don’t have to break the bank in order to do so. I’m a firm believer in supporting smaller businesses, and I reduce, reuse, recycle; that’s why I use a lot of vintage, and I thrift. It’s a combination of being able to mix high-end, low-end, new, old stuff. I feel like now is the time more than ever to really go after your dreams, especially in New York. Now is a time for self-expression, and clothing is the most vocal and visual form of expression without you needing to say anything.

“Doors are opening in fashion that have been closed for a very long time.”

Being a black girl and not seeing that representation in fashion, I’m so lucky that I’m able to be that representation now. Having an audience that is predominantly young, black girls and older black women means that I’m doing something that hasn’t been done before and that I’m able to give back, and that means a lot to me. Just being able to encourage that demographic to really get out there and chase their dreams and express themselves as much as possible is really the biggest gift that I have been given within this whole journey. It’s a very powerful tool. And now, doors are opening in fashion that have been closed for a very long time—if they even existed before. I just hope to be able to bring diversity into fashion in whatever way that is, whether that be racial diversity, or diversity in styles and things that people wear, because there are certain looks that haven’t been acceptable until now, too. And New York is the place that you can go and say, you know, ‘This is actually what’s in.’