“A horse is multifunctional; it is transportation, it herds, and it is food in our country,” says Ganzorig Ganbold, a horse tour guide for Nomadic Journeys in Mongolia. “Horses are not a pet here, but they are much closer to heart.” Photo courtesy of Equitours.
DispatchAnnie Werner

Cars aren’t the only way to hit the road. In some early civilizations, horses were the first mode of rapid transit. And though our means of travel have evolved through the centuries, our enduring love of equines lives on, forever a symbol of human progress.

Though our means of travel have evolved through the centuries, our enduring love of equines lives on. Here, we profile the people around the globe working to make equines more accessible.

Even if you don’t self-describe as a “horse girl,” it’s hard to deny the allure of the genus Equus. Wishing for a pony on a childhood birthday is practically a right of passage, so maybe it’s not surprising that the equine industry contributes $122 billion to the U.S. economy each year.

Still, other than the occasional trail ride, the most prevalent references many people have for horse culture are limited to the Kentucky Derby, the spectacle of a rodeo, or elite sports like polo and dressage. Most people don’t have personal access to the animals—the initial cost ($1,500 on the low end) plus ongoing maintenance (it helps to have a staff) make owning a horse out of the question for most.

This isn’t the case in all parts of the world, however. In Mongolia, where the horse population exceeds the human population by almost a million, owning horses is commonplace, fostering a special relationship to the animals that has changed little over thousands of years.

“We try to do everything we can by our community.“

“My chestnut horse remembers me every summer,” says Ganzorig Ganbold, a horse tour guide for Nomadic Journeys. Mongolians release their semi-feral horses back into the wild each season, allowing them to freely graze and forage out on the Mongolian steppe, and then corral them back as the weather turns warm. “Even after a chilly winter, he is nice and calm to me every time.”

Though the rest of the world will probably never match Mongolia-level horse culture, there are people that are working to make horses more accessible. Here, we’ve highlighted two groups that tap into the expanded potential of the human-horse relationship. 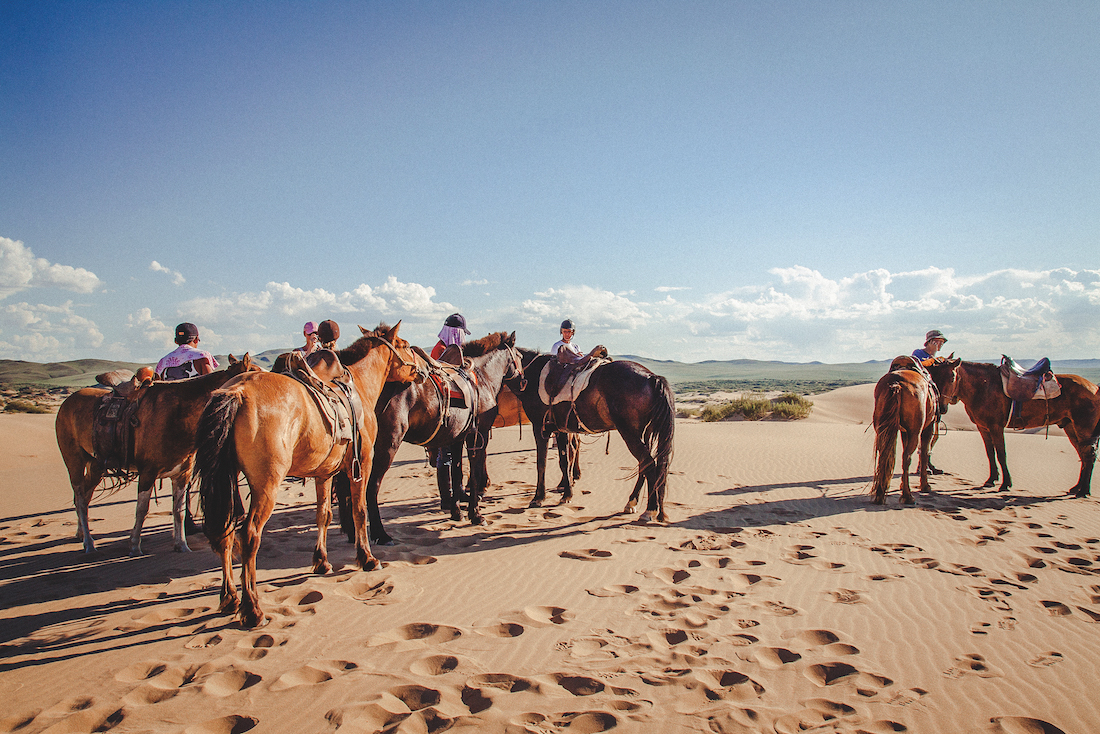 Much of Mongolian tourism centers around multiway and multi week horse treks across the vast grasslands, giving visitors a peek into nomadic life. Photo by Ana Nordenstahl.

Making a statement, connecting with community

This past summer images of protesters on horseback from Los Angeles to Houston made U.S. national news as teams of Black cowboys added an unexpected element of grandeur to the demonstrations in the wake of George Floyd’s death.

A Houston group known as the Non-Stop Riderz felt an especially strong connection to Floyd, a native of the Texas city.

“We try to do everything we can by our community,” says co-founder Cassandra Davis, known as the “first lady” of the Non-Stop Riderz in Houston’s Fifth Ward, a historically Black neighborhood. Making a statement at the protests in late May was personal: “I have a seventeen-year-old son who puts his life at risk every time he leaves the house,” says Davis, and though Floyd was from the Third Ward, their families knew each other.

Whose streets? A look at street protests around the world → 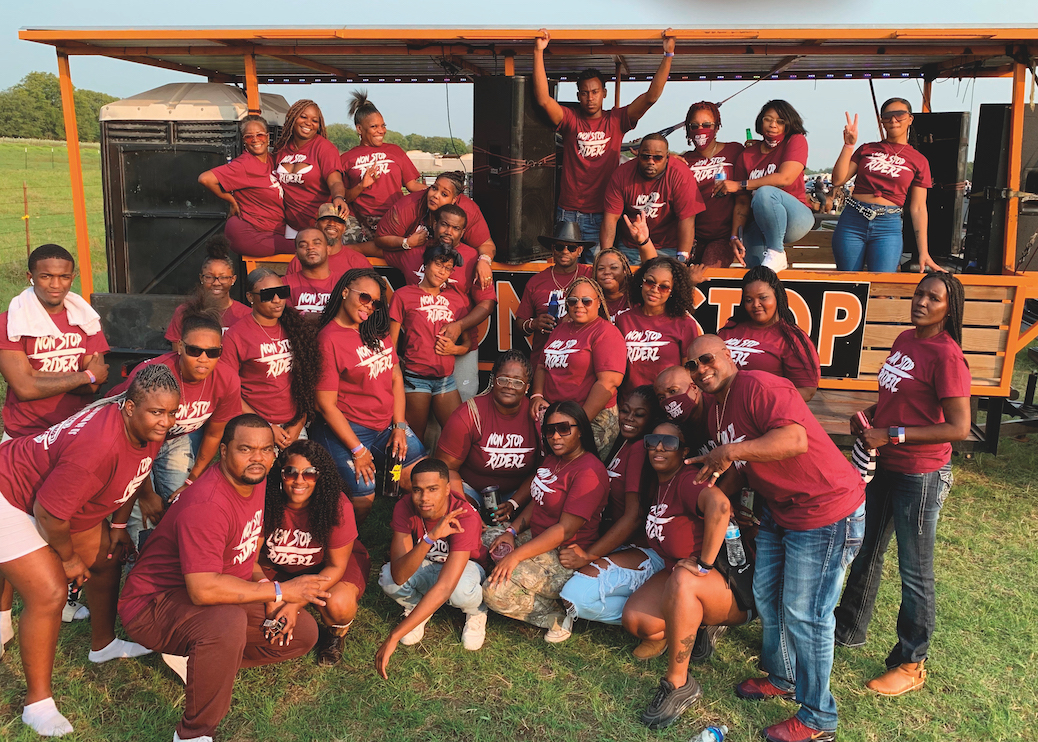 The Non-Stop Riderz in Houston, Texas, host trail rides very week with their community from the city’s Fifth Ward. Photo courtesy of the Ebony Horse Club.

The Non-Stop Riderz presence at the protests was powerful, and photos of the Black cowboys at the protests that circulated on social media afterward also had the effect of changing the image of who can be a horse rider. “I’ve spoken to many people since the protests, and so many say they didn’t know there was a culture of Black cowboys,” says Davis.

But the Non-Stop Riderz are a force within their community. Founded in 2016, the group is now up to around 100 people and hosts trail rides each weekend as well as an annual campout. To Davis, horses are a means of community bonding.

“We try to do everything as a family,” says Davis. “We do everything we can to form a bond, to understand each other—and that sets us apart from other trail-riding groups.” 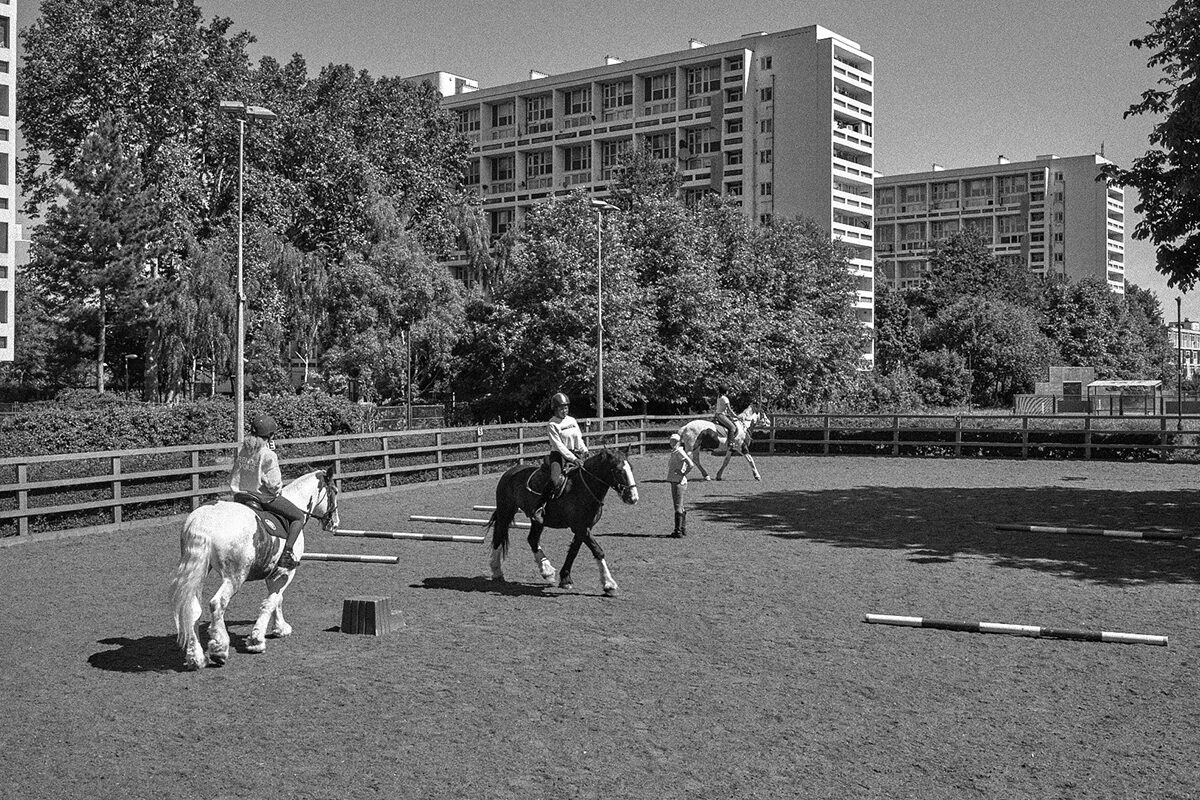 Teenagers in Brixton practice riding at a club nestled between large brick buildings and the London Overground. Photo by Cassandra Johnson.

Fostering hope for the future

It’s possible that horse culture suffers from an elitist reputation in part due to its royal connections across the pond. Queen Elizabeth is an avowed horse lover, breeding thoroughbreds for racing and continuing her love of riding now well into her nineties.

But across the River Thames from Kensington Palace is a horse stable in Brixton with more humble beginnings. One of London’s predominantly immigrant neighborhoods, with strong Caribbean roots, Brixton is known for its famous market, rich nightlife, and incredibly diverse restaurants—but the area is also one of the poorest in the U.K. and, in recent years, experiencing rising inequality.

“Our community can be quite chaotic and challenging to be in,” says Naomi Howgate, general manager of the Ebony Horse Club in Brixton. “For kids to know that they’ve got a place to come and hang out with their friends and be in a supported environment is very important.”

“You have to develop, most importantly, a sense of empathy.“

The Ebony Horse Club started 25 years ago to provide the neighborhood’s children with an after-school activity. “We teach the kids to ride, but the club is about much more than that,” says Howgate. “It’s about helping the kids develop skills for whatever they want to do with their lives.”

Five ways we can build a more inclusive travel industry  → 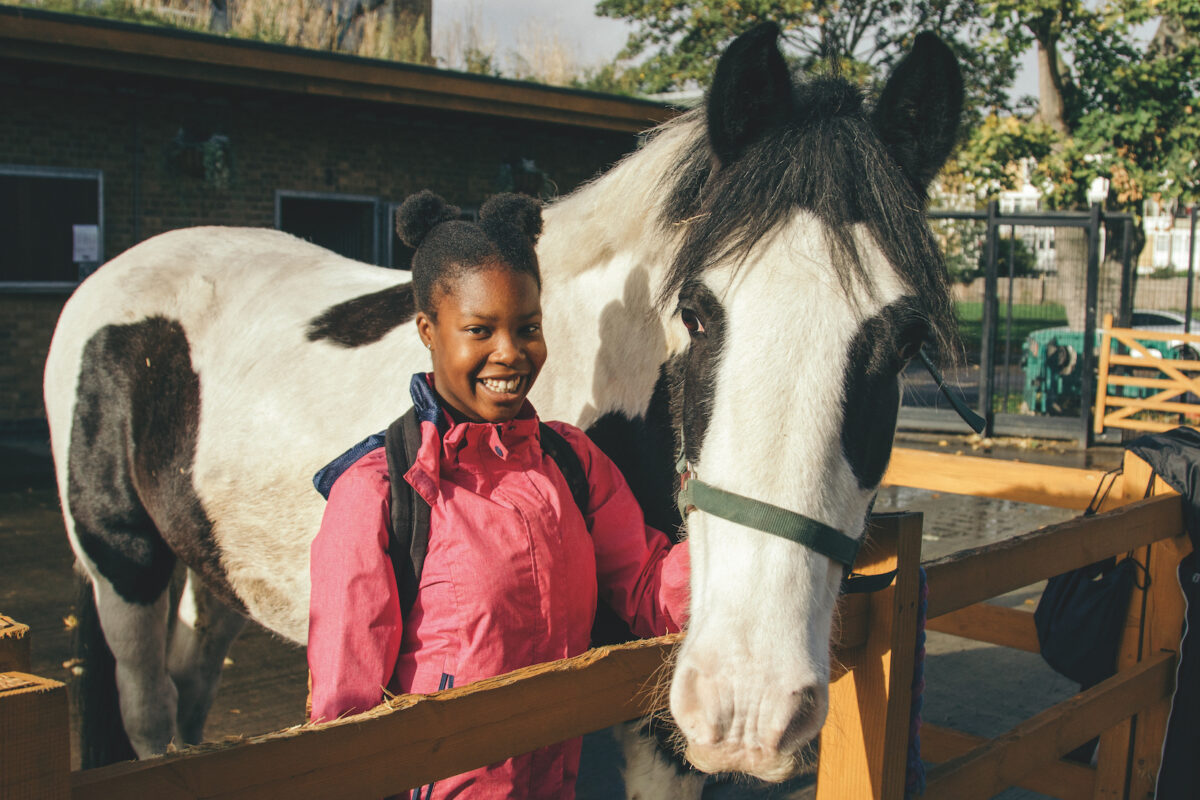 A rider at the Ebony Horse Club in Brixton. Photo by Kim Lomax.

Of the estimated 150 kids the club works with each week, only 20–25% of them are white, Howgate says, which is “practically unheard of” at other clubs across the country. Howgate believes the benefits of riding and working with horses are vital to Brixton’s marginalized youth.

“Anyone who has ever ridden a horse will find that you’ve got to overcome quite a bit of challenges when you’re suddenly on this big scary animal that could do anything it wants if you’re not paying attention,” says Howgate, noting the incredible bond the children form with the club’s horses.

“You might have a kid that comes in and they’re so upset. They might be bullied at school or they’ve got loads going on at home, and then they just spend time with the horses and they’re absolutely transformed,” Howgate continues. “The kids know that the horses can’t judge or bully them, and if they love the horse, they’ll get that back.”

For any horse rider, there must be a certain surrender of the ego, notes Howgate. “Whether you’re the Queen or just anybody, the horse doesn’t know. You’ve got to respect the horse and try to understand what the horse is communicating. You have to develop, most importantly, a sense of empathy.”