Model-Activist Mama Cax on Traveling with a Disability

Mama Cax at the William Vale hotel in New York.

When Cacsmy Brutus, who goes by Mama Cax, checks her phone to see what travels she has coming up this month, she notices that there’s a flight from Austin to New York, where we are now, scheduled for the weekend. “Am I supposed to be in Austin right now?” she wonders aloud. “That can’t be right… Sometimes it’s weird that you wake up in the morning and can’t figure out exactly where you are.”

In the past month, Cax has walked in runway shows at New York Fashion Week, flown to Dubai for a shoot and then to London for another shoot, then stopped off in New York for three days before heading to Austin and then Paris and then Austin again to speak at South by Southwest. “So, I’ve been jetlagged for quite a long time,” she says. “It’s been a lot of packing and unpacking.”

Cax was only signed by JAG Models a year ago, but if her travel schedule is any indication, she is already quite the success, especially when you consider that she never planned to become a model. In high school, her leg was amputated after she was diagnosed with bone and lung cancer and had an unsuccessful hip replacement. It took years of “digging deep” to reclaim her confidence. Her first prosthetic leg was designed to look as real as possible, but eventually, she began wearing the colorful patterned leg covers that dot her Instagram feed today. (She has 18 in total, two of which she designed herself.)

“I realized there were so many people going through the same thing, and they needed to know that they weren’t weird or that it was okay to accept their body as it is,” she says.  “I think that in itself gave me confidence.”

In September, the 29-year-old landed the cover of Teen Vogue, which was particularly meaningful to her for its audience of young women. She’s also partnered with the U.N., speaking at UNICEF’s Day of the Girl and hosting body-positive workshops.

“Body positivity is not really about the exterior and being vain,” she says. “It’s about knowing that once you love your body, you become confident. And this is where confidence can get you.” 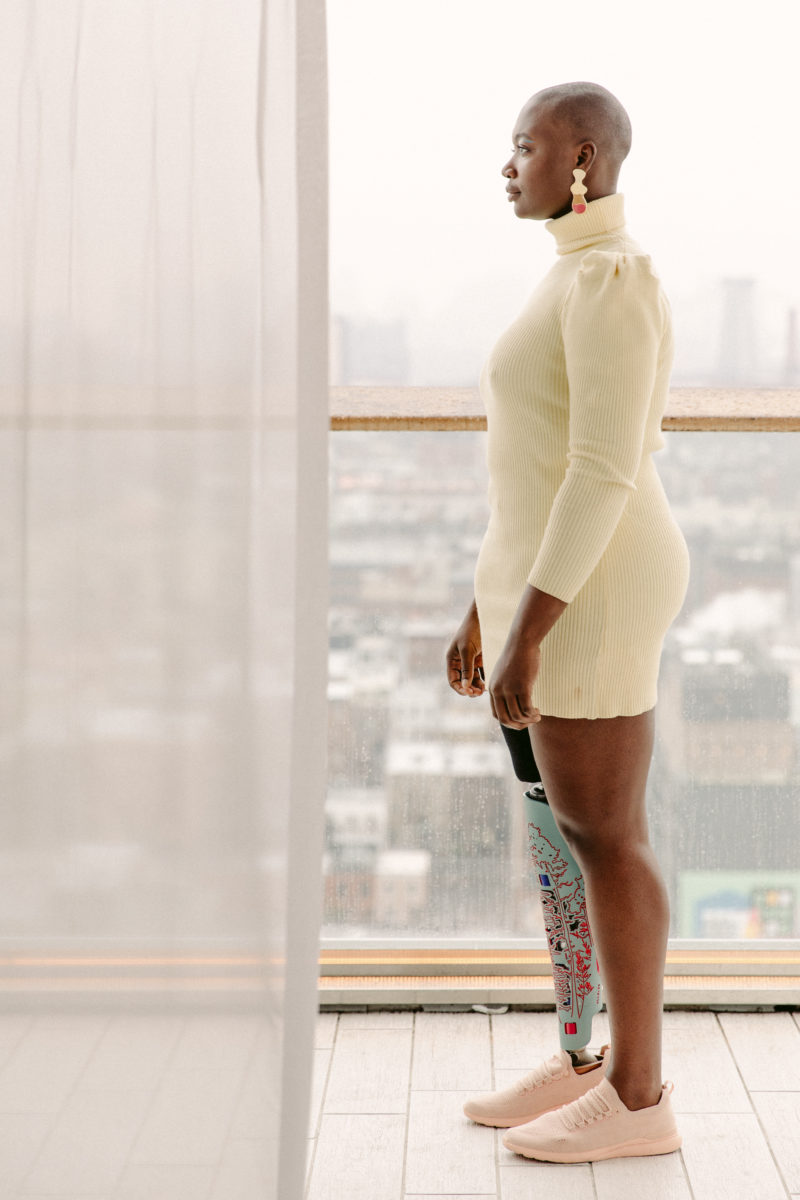 In high school, Cax's leg was amputated after she was diagnosed with bone and lung cancer and had an unsuccessful hip replacement. 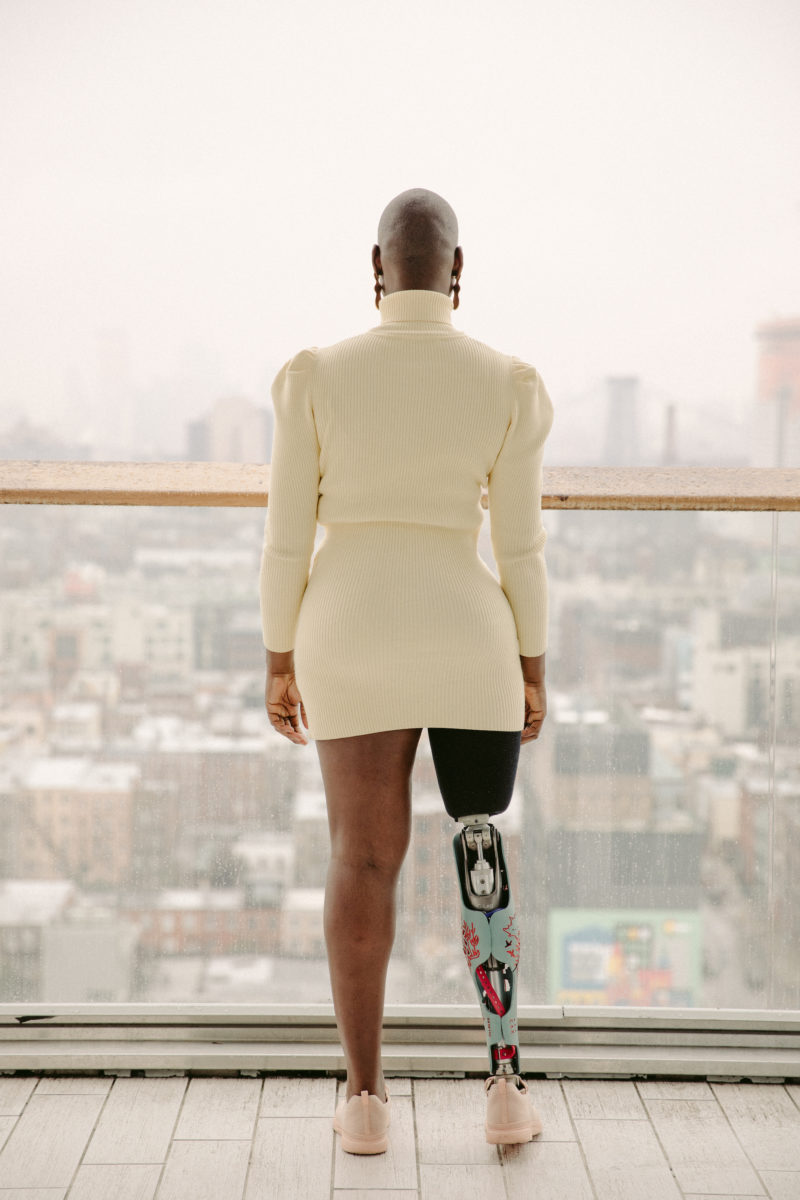 Has your life completely changed since you’ve been signed as a model?

In a way, yes. I was working a 9-to-5 and to move into a freelancing/creative lifestyle is completely different from what I’m used to. I was working at the New York City Mayor’s Office. After that I spent a year getting my master’s in international relations. I always thought I’d either be working at a nonprofit or at the U.N., but I definitely did not think I’d be modeling.

How did you start modeling?

I’d always been a blogger, even when I worked my regular 9-to-5, and I think I’ve spent a lot of time developing a brand even though I didn’t see it that way at first. I just thought I was having fun with a side project, but I think that put me on the map for so many opportunities. Right after I finished my master’s program, I was on my way to New York and got an email that Wet n Wild wanted to cast me for this huge makeup campaign, and I thought it was amazing and unbelievable because I didn’t know what my next step was. I ended up flying to LA and shot the whole thing. I met so many amazing people there, and all of them had agents—I was told I was the only one the company ever casted through social media and that I should consider joining an agency.

How did that process go?

There were definitely places that told me they weren’t interested, or there was no answer, or that I would not be easy to cast for a job, or that I did not look like the average model. Not just in body type but also in size. It was not easy, but at the same time, this was not my ultimate goal. I just thought, “Okay, let me try that. If it doesn’t work, I have plan B, C, D…” 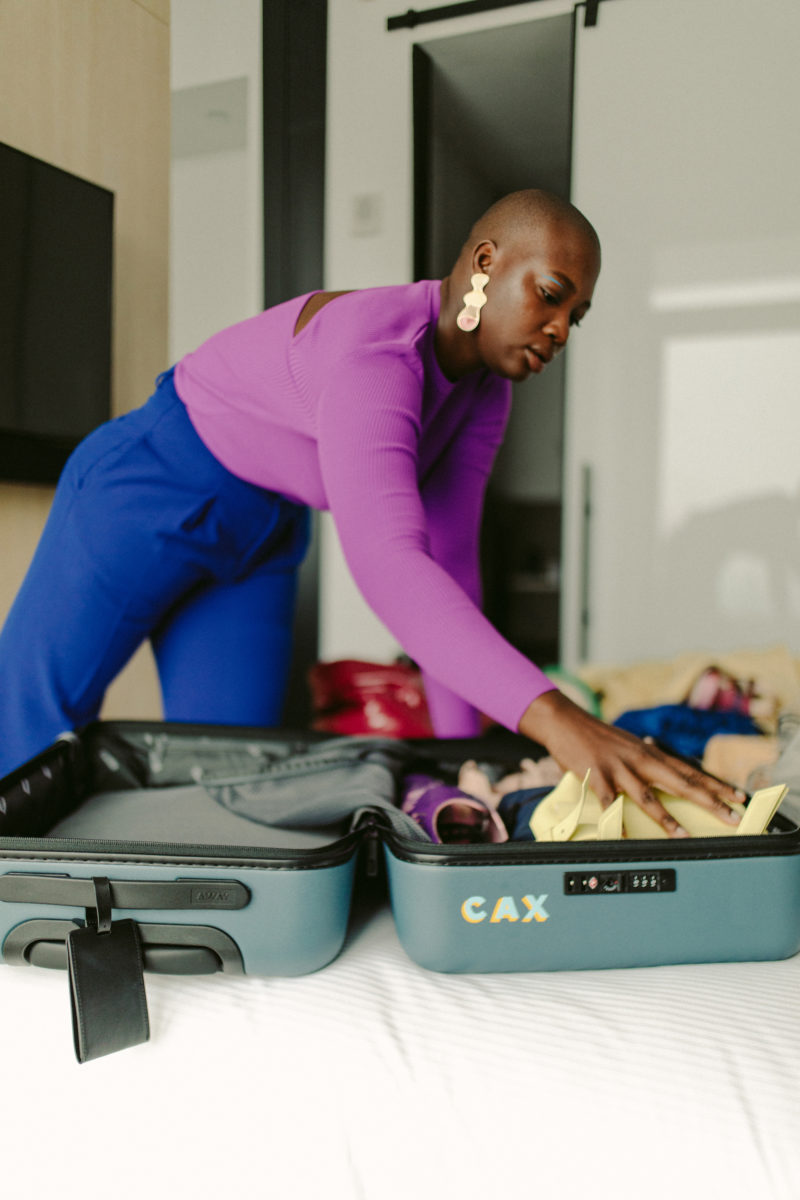 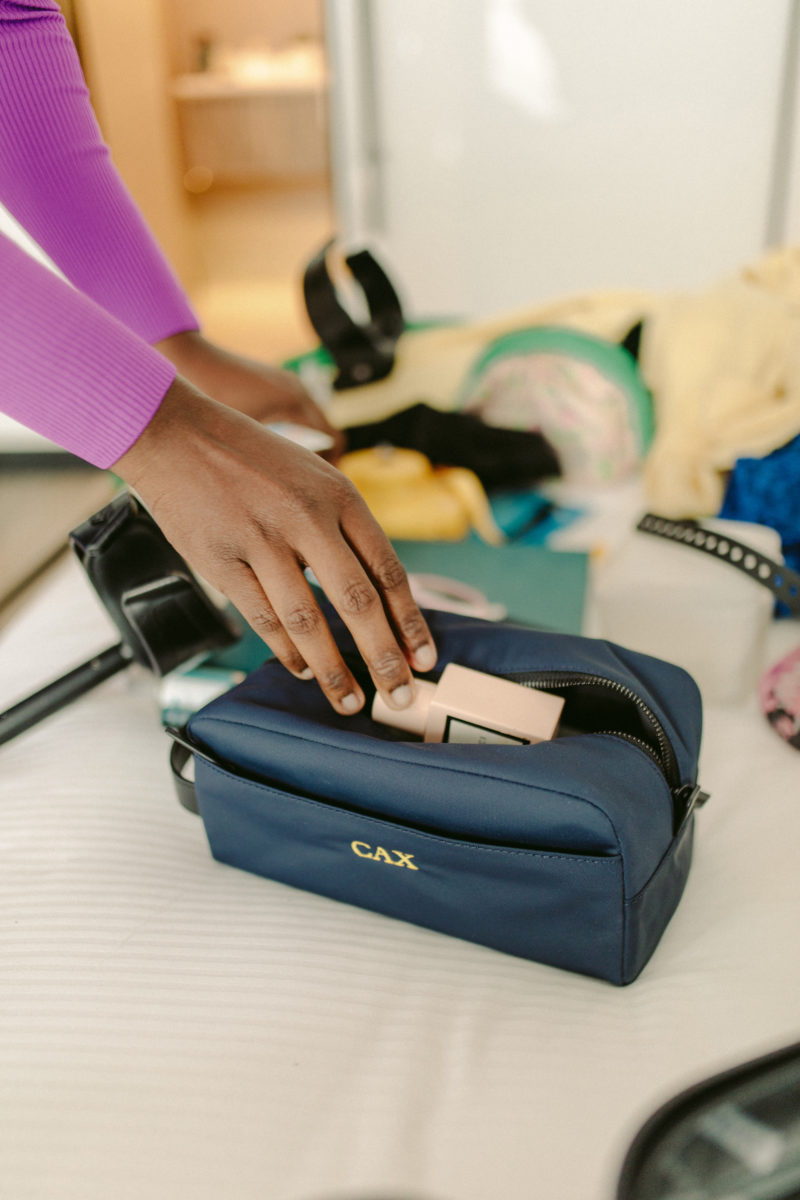 "If I'm traveling for more than three days, I bring my Severin hair trimmer, because I shave my head every four days."

How are you combating the idea that you’re not the “average model” in your work?

I always make sure that whoever I work with, they’re aware of me as a person and not just a token for the brand. If I’m on set and the set is not accessible, I make sure to say something. If you’re hiring someone who uses crutches, yet there are no elevators on set, or they have to climb a bunch of stairs just to get to hair and makeup—that’s a problem. I feel like people recognize that I’m a black woman, but oftentimes they forget the disability part. On one hand, that’s a good thing because sometimes that’s the only thing people focus on. But we have a multitude of identities—there’s pride in being a woman, there’s pride in being black, and there’s pride in being disabled.

Did you always feel that way?

Not at all. I’ve always been proud of being a woman and proud of being black—coming from a black country that was the very first free black republic in the world, that was quite a big thing that shaped me. People often say I “transcend disability,” but because I wasn’t born with a disability, I had to learn to take pride in that. I can now say with certainty that a lot of us, if we had a do-over, we probably would not change much, because you realize that the things that you go through are what shape you. I don’t know where I would be if I didn’t go through my cancer experience or have my leg amputated. I think that’s what turned me into a blogger and pushed me to experiment with styling. 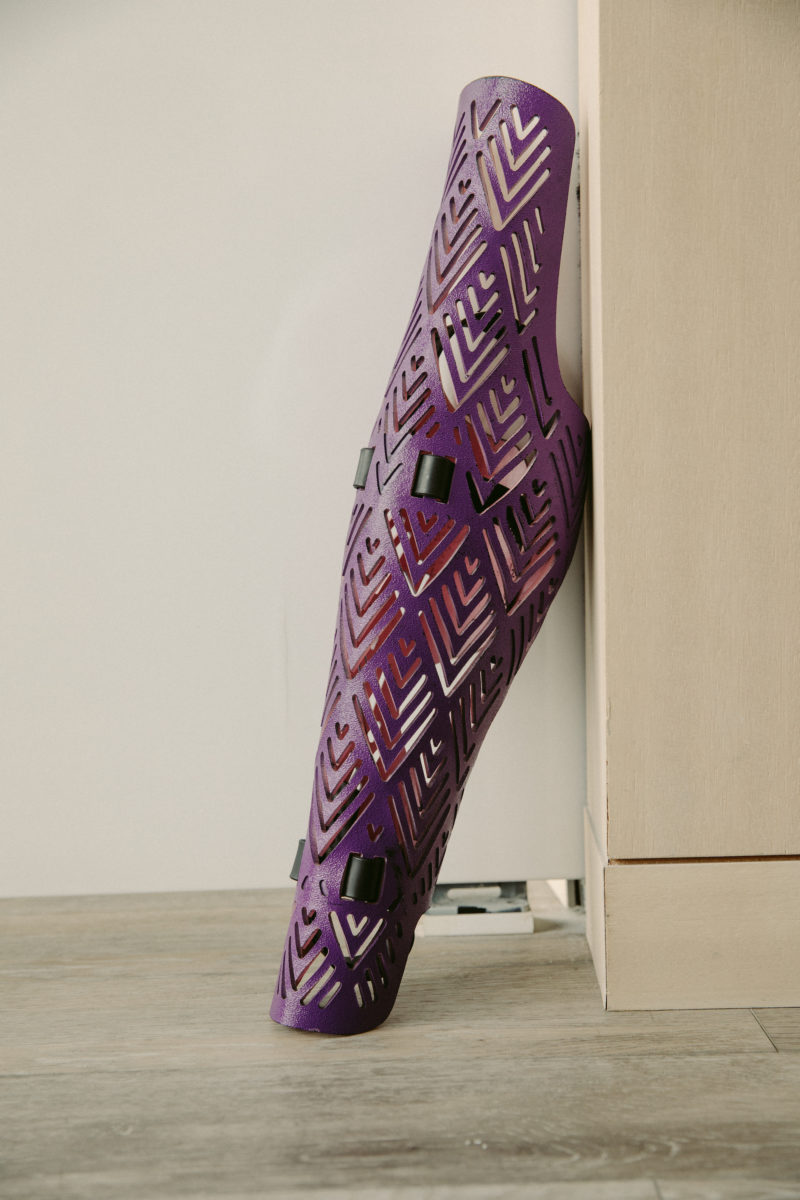 Mama Cax has 18 prosthetic leg covers, two of which she designed herself. "Eventually, what I want to do is turn them into art pieces on my wall," she says. 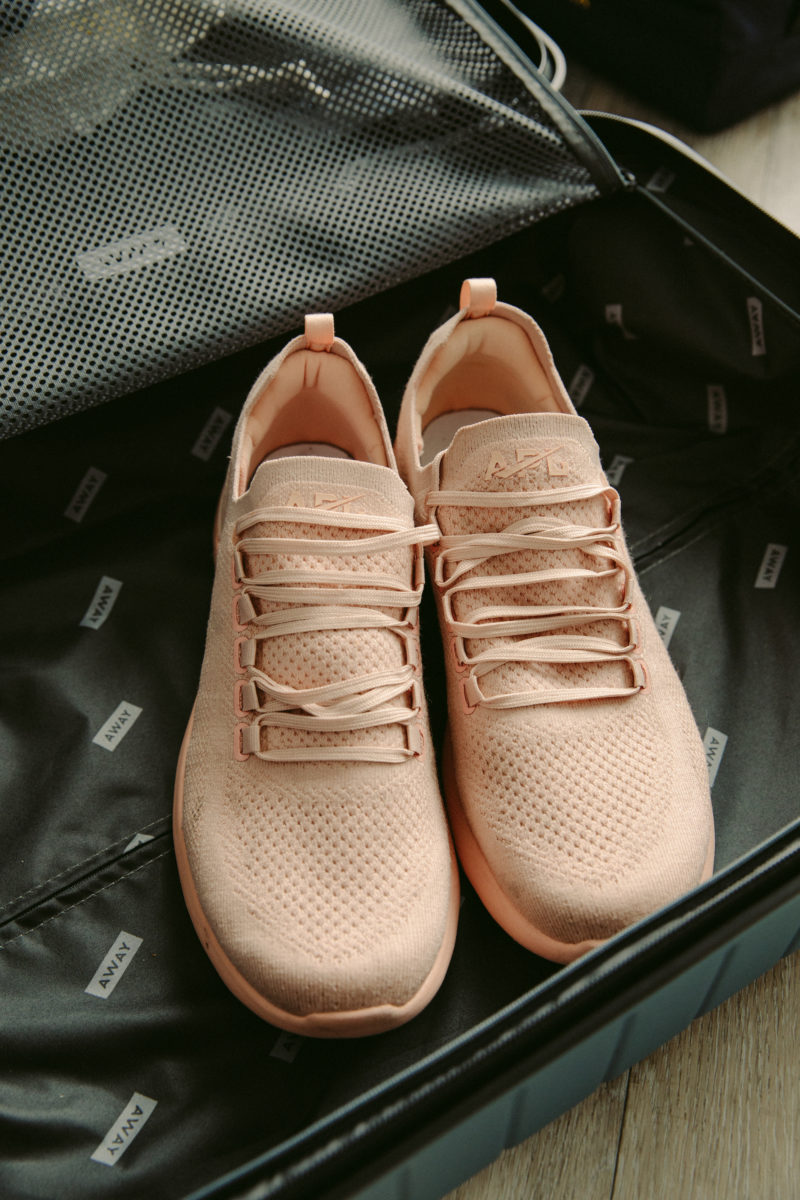 "I always travel with sneakers if I'm trying to be practical." 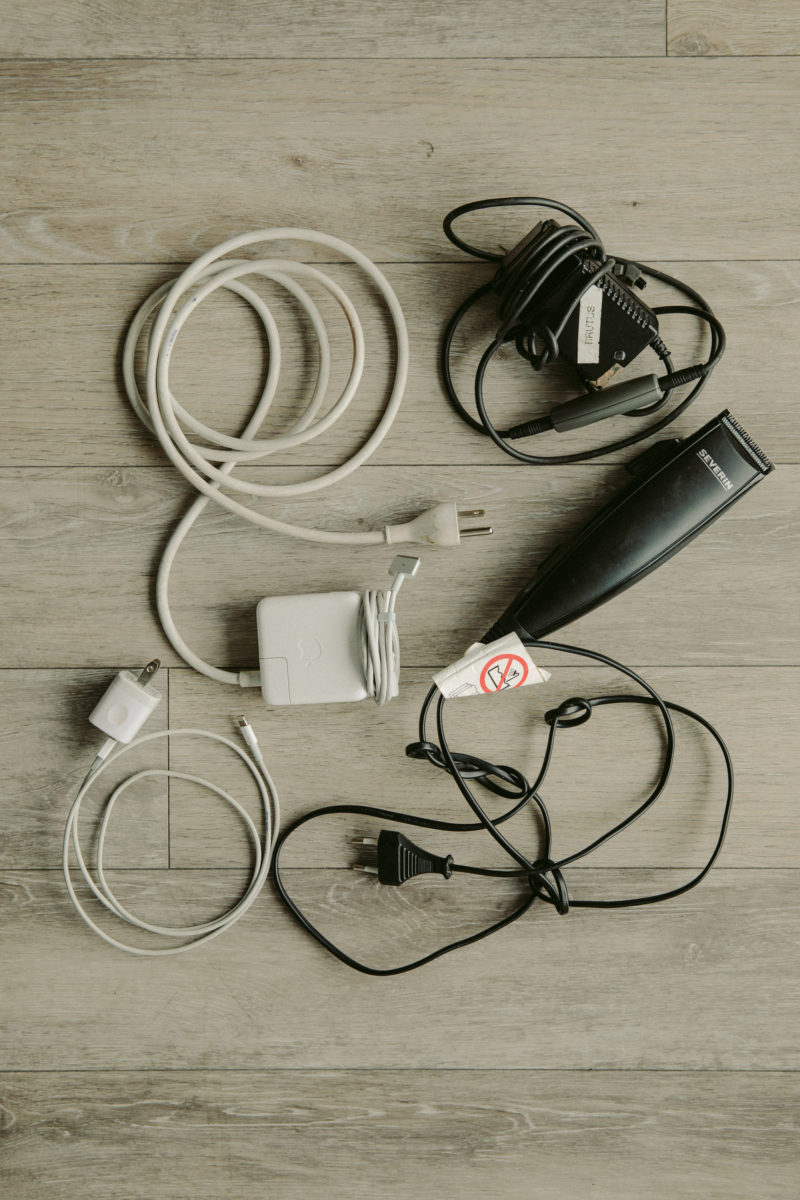 Mama Cax thinks about packing in "tiers," starting with the most important items, which includes her many chargers. 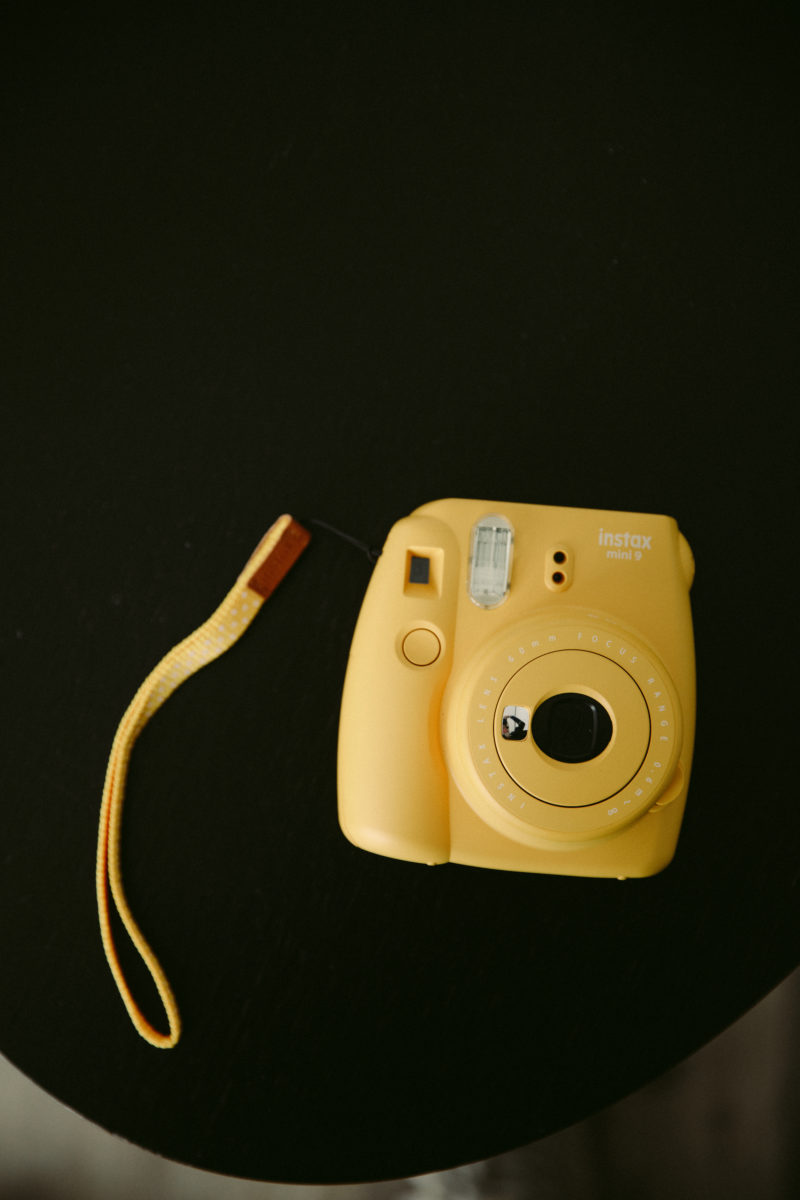 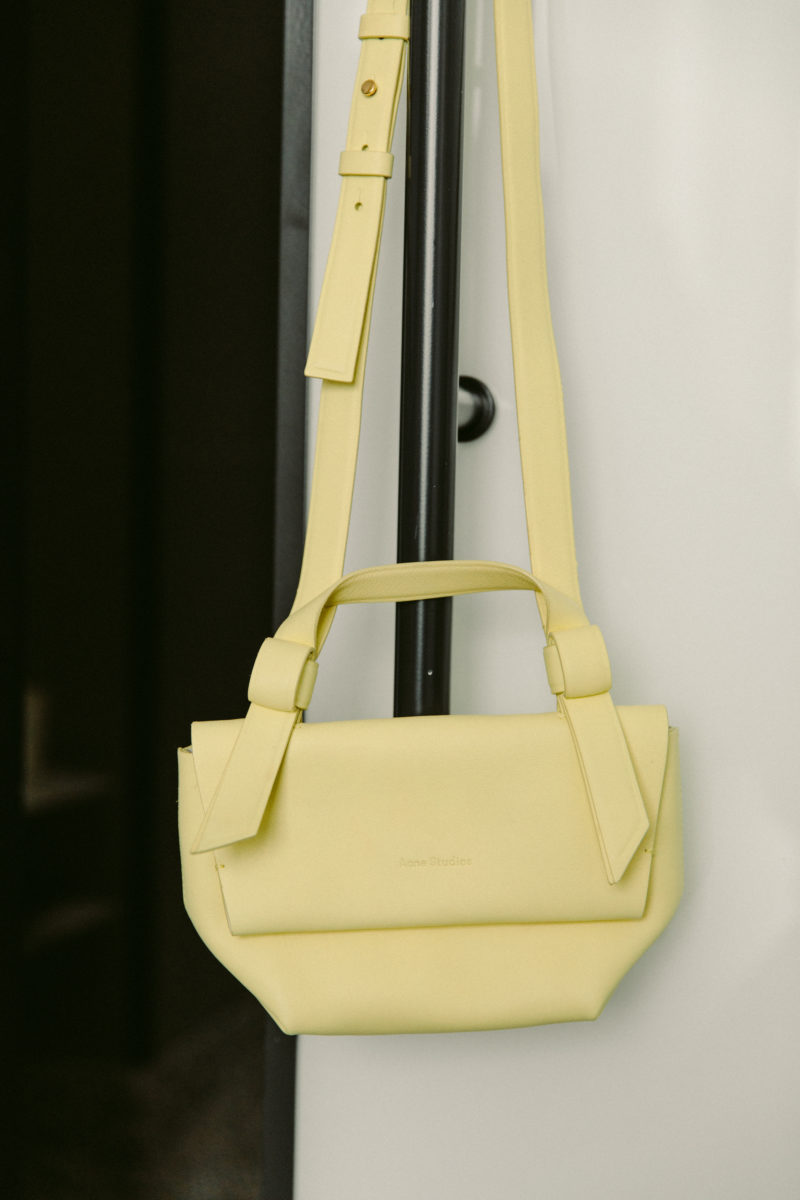 A pop of color goes a long way when traveling.

What’s been your favorite project so far?

My campaign with Olay, and I think one of the reasons I loved it so much was not only because of the people involved but the messaging behind it. It was a project for women, by women, uplifting and inspiring women. Seeing huge posters in Times Square of my face was kind of surreal. Obviously the cover of Teen Vogue was incredible.

Did you do a lot of traveling before this year?

Even before modeling, I was a travel and fashion blogger. I made it a point to travel at least twice a year. I think overall I’ve been to 35 countries. Right after college, I traveled in Southeast Asia for about eight months. Then my master’s took place in three different countries: France, Tunisia, and Italy. Traveling has always been a passion. I just love exploring new places. I have plans to go to Japan soon. Both Japan and Kenya have been on my list for ages. I’m trying to do those before the year ends. 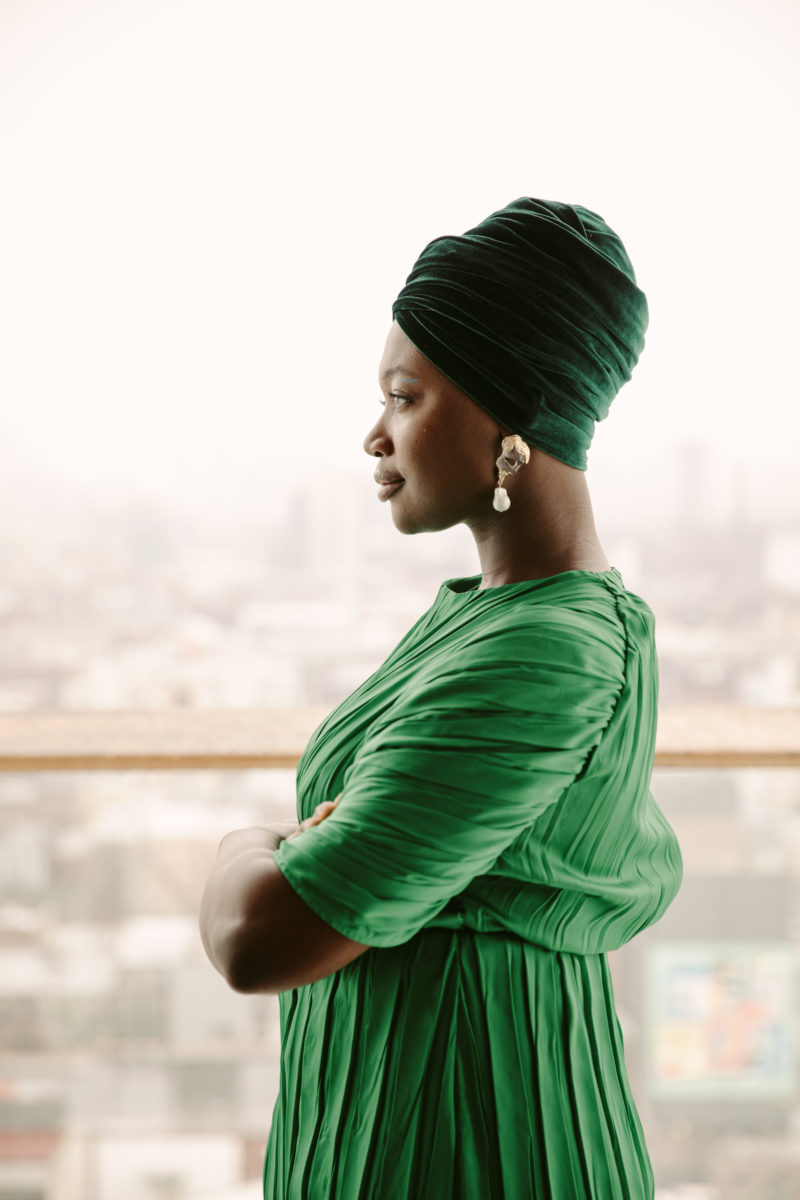 "I don't have hair to protect my head from the cold, so I usually have a head wrap. I'm in love with this velvet one, from my friend Fanm Djanm's company." 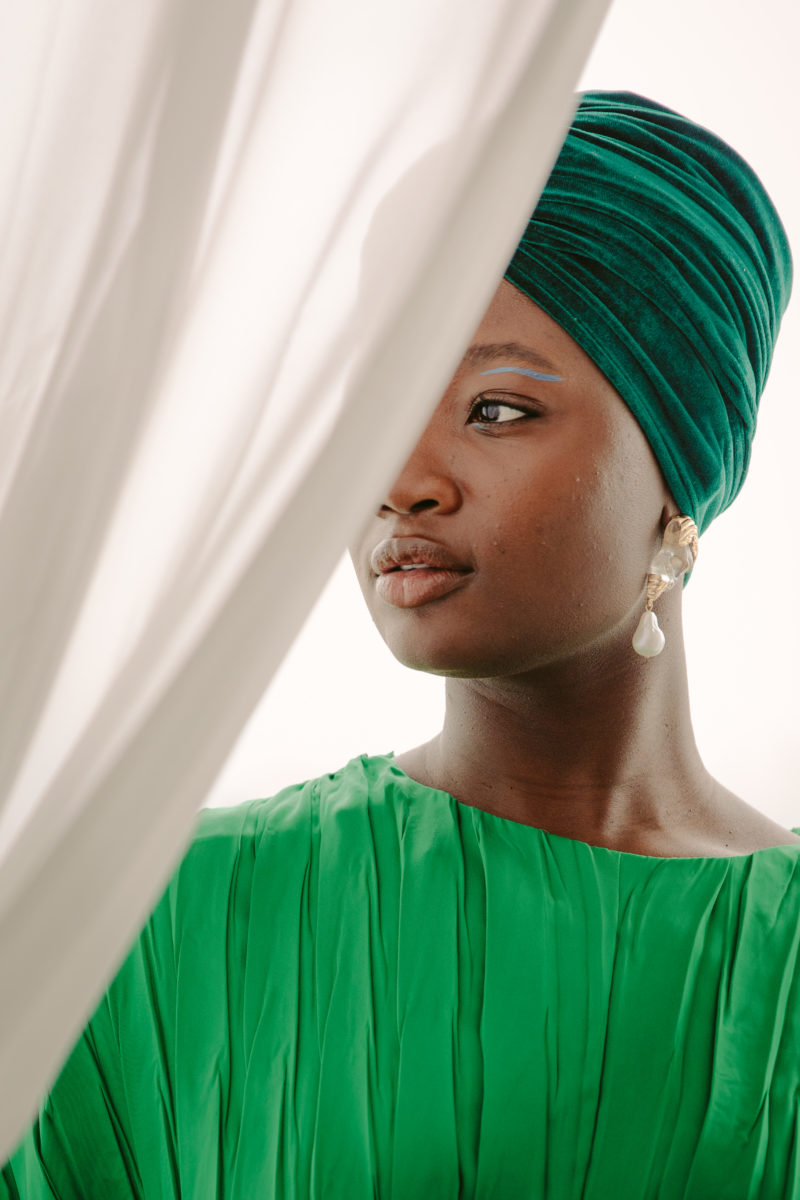 "This is where confidence can get you."

What gave you this instinct to explore new places?

I was born in New York, but grew up in Montreal and Haiti. As a kid my favorite subject was always geography, and I even remember working on a group project where everyone had to choose a country to present on. My group chose Brazil, and from then on I was obsessed with Brazil and wanted to travel there. Later I would read art history books and want to visit certain museums around the world. I was obsessed with seeing the Leaning Tower of Pisa or the Mona Lisa in person. I think it’s about being curious and wanting to learn from people beyond my community or my culture.

What’s next for your career?

I do realize while I have this platform, I can do a lot of great work, which is why I’ve been working more on disability advocacy or advocating for more body positivity or body inclusion in the fashion industry and beyond.

Then the second panel I was on was in partnership with the United Nations, so talking about the importance of inclusion and diversity and how that plays a role in the U.N.’s development goals.

So I don’t set a limit for myself in terms of what my goals are or what I can accomplish in the next five years. 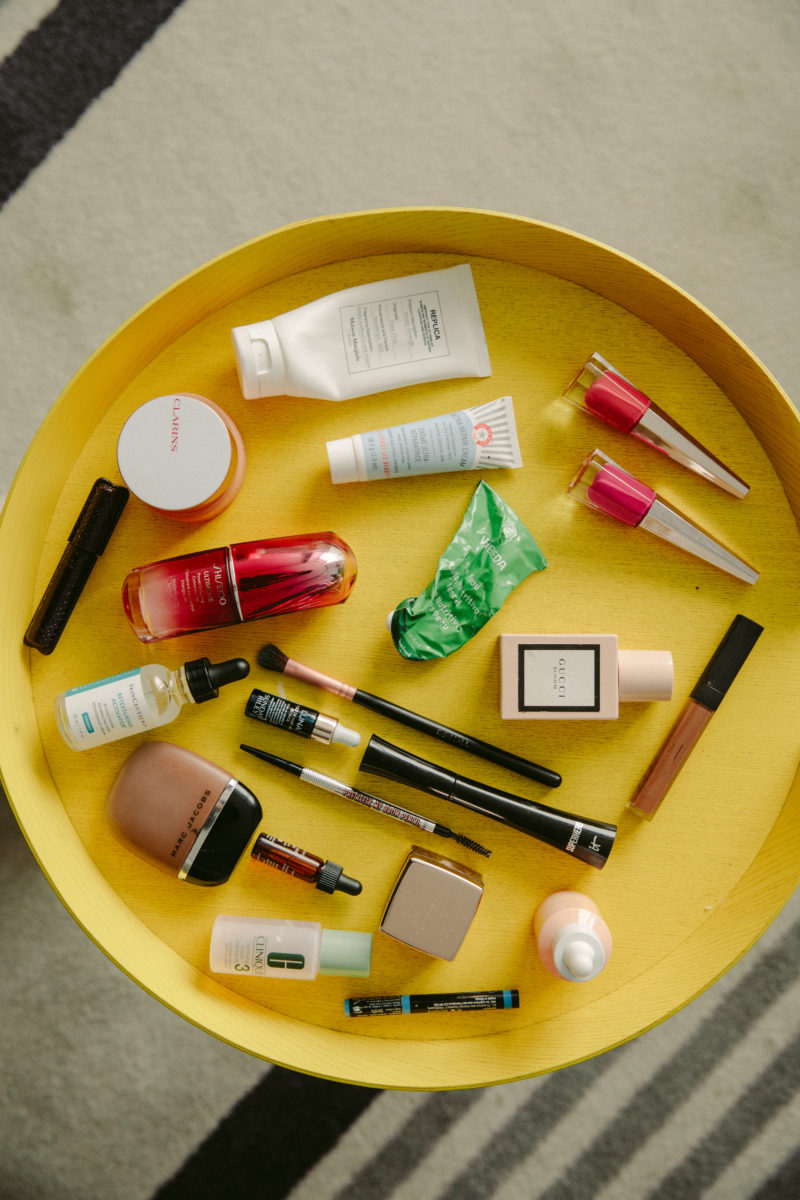 "More steps means you're doing something great," says Cax of her beauty routine. 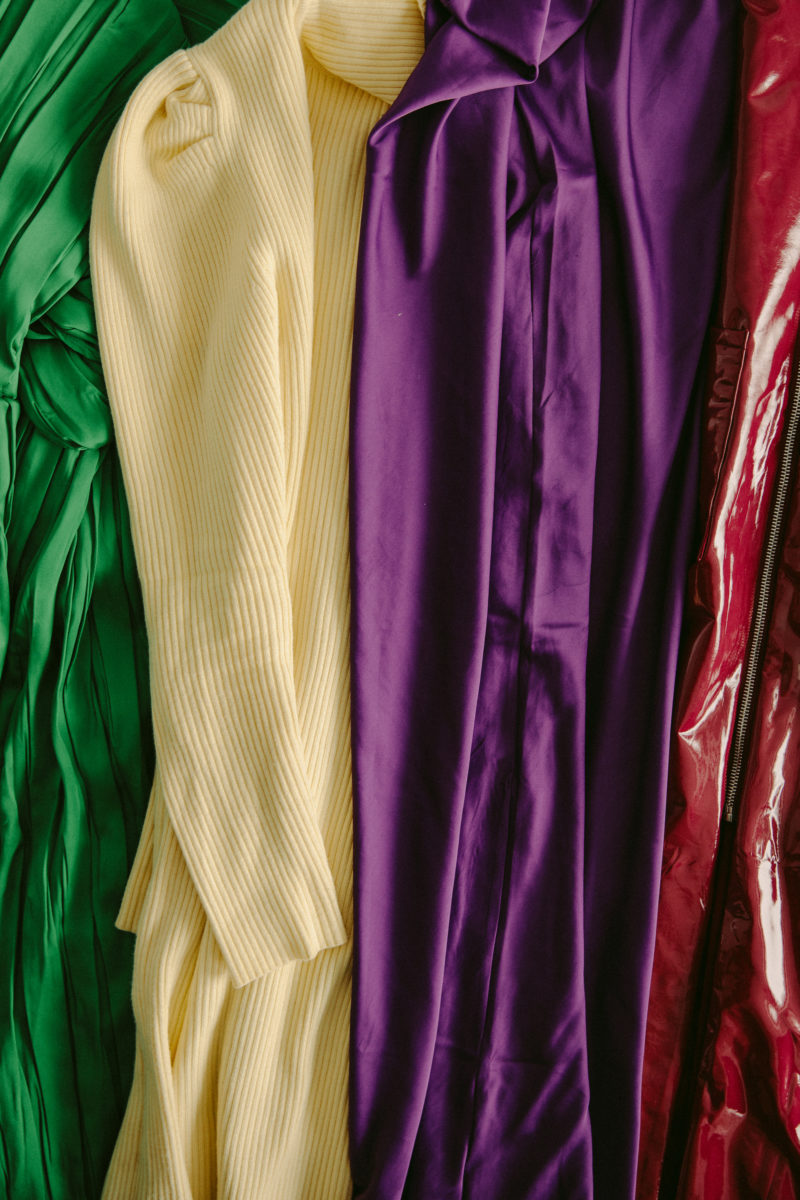 What do you never leave home without?

When I’m packing I think of a list with different tiers.

The first tier is the things that I cannot leave behind, because if I do, it will ruin my trip. So, that list would include my phone (obviously), my passport, computer, calendar, my leg charger—I can’t live without that one. I once paid almost $200 to have it delivered overnight. I can’t live without rose oil. I suspect it’s making me break out, but until I have hard proof, I’m going to keep using it. And I can’t live without these Olay face cleanser wipes. They’re amazing because once you wet them they lather, but they’re dry so it’s not heavy when you’re carrying it. If I’m traveling for more than three days I bring my buzzer, because I shave my head every four days.

The second tier is the things that will go in my hand luggage, which includes a face mask for the flight, Lucas Papaw Ointment or Skin Food for lips.

The third tier the stuff that if I forget it, it’s not a big deal, but they would make my day better, like my earrings and rings and jewelry in general. Most of my stuff is from Zara or Mango. I have a ring that’s actually from the ASOS men’s section. I get a lot of men’s rings because I have really big fingers, and they always have nicer rings.

Do you have any rituals that help you stay sane while you travel?

I know a lot of people think it’s BS, but I’m a huge fan and practitioner of self-care. I only take showers at home because I don’t have a tub, so being able to stay in hotels where there’s a tub, you can just like relax, drink some champagne, and do a face mask just helps me relax.

I think one way I stay grounded is that I try not to push myself too much. Whatever I do at home, I also do it abroad. So, if at night my regular thing is to clean my face and do a face mask and then watch Netflix, when I’m away, I do the same thing.