In the two years since she’s released her debut single, “Alaska,” Maggie Rogers has swiftly transitioned from student to star—without compromising her sense of self. For Here Magazine Issue 07, we caught up with her to explore her rapid ascent to fame before she set out on tour.

Maggie Rogers always travels with tarot cards. She pulls a card each day as an exercise in recognizing her present state. She’s found it to be a helpful creative tool and an important part of storytelling. When she was making “Heard It In A Past Life,” her debut album with Capitol Records, Rogers kept pulling the Empress card, which represents a strong connection to femininity and control over one’s emotions and purpose—a very helpful state when one is recording their first record.

During a photoshoot at the Hoxton, a hotel in Williamsburg, Brooklyn, it seems that this might be Rogers’s perpetual state. Her confidence is practically intimidating.

“I don’t think so, that doesn’t feel right,” says the 24- year-old, when our photographer suggests a pose or location that doesn’t make her comfortable. Even (or maybe especially) in 2018, the cultural expectation that proper femininity does not present as firm and established—or even comfortable—within one’s own space or body is at odds with Rogers’s self-assurance. She doesn’t need you to like her, especially if it might mean forfeiting her own narrative. (“I’d rather talk about the album,” she says, when I ask her about her EP with Capitol Records, “Now That The Light Is Fading.”) But she manages to state her needs in a way that never feels rude or dismissive, part of creating her own boundaries in a world that is quickly becoming—both physically and emotionally—boundaryless. 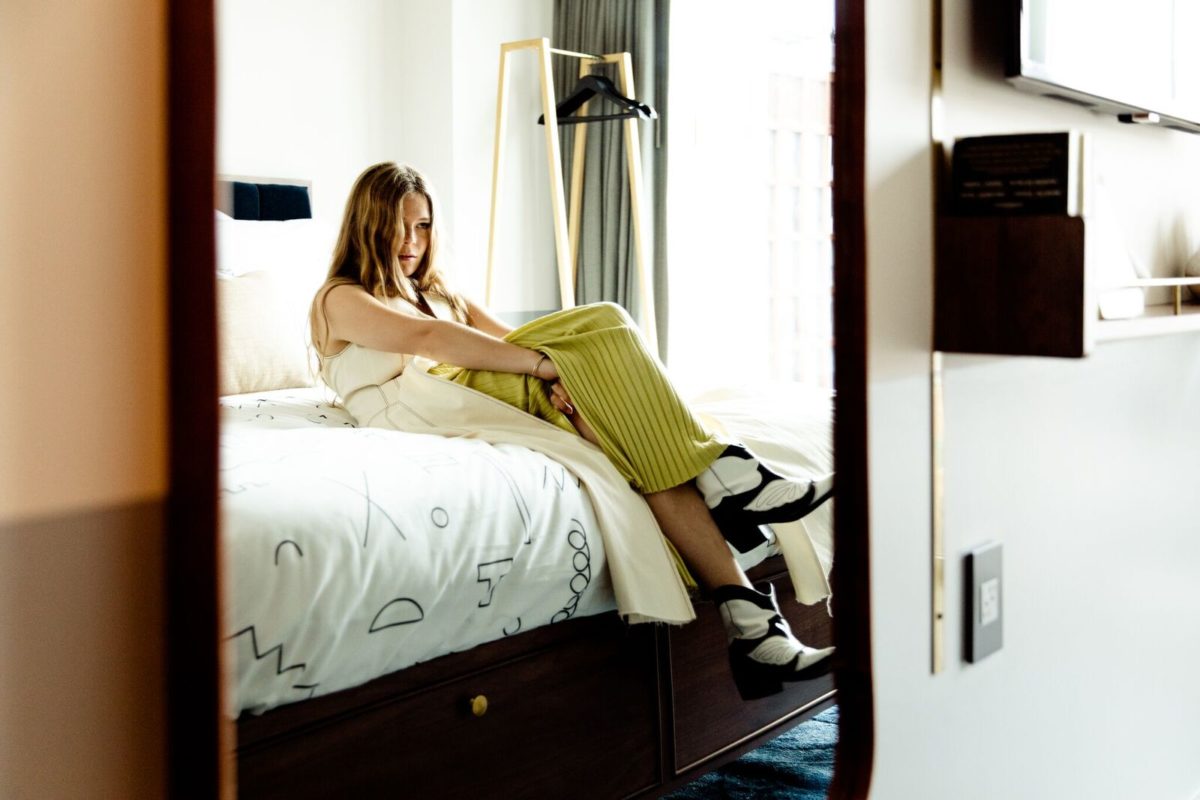 Kicking back at the Hoxton in Williamsburg, Brooklyn, Rogers says she’s “really ready to take on everything” that she is about to face in her escalating career. “I needed a lot of recovery time after the last tour cycle, but I have had a lot of quiet time writing the record. I feel really creative right now.” 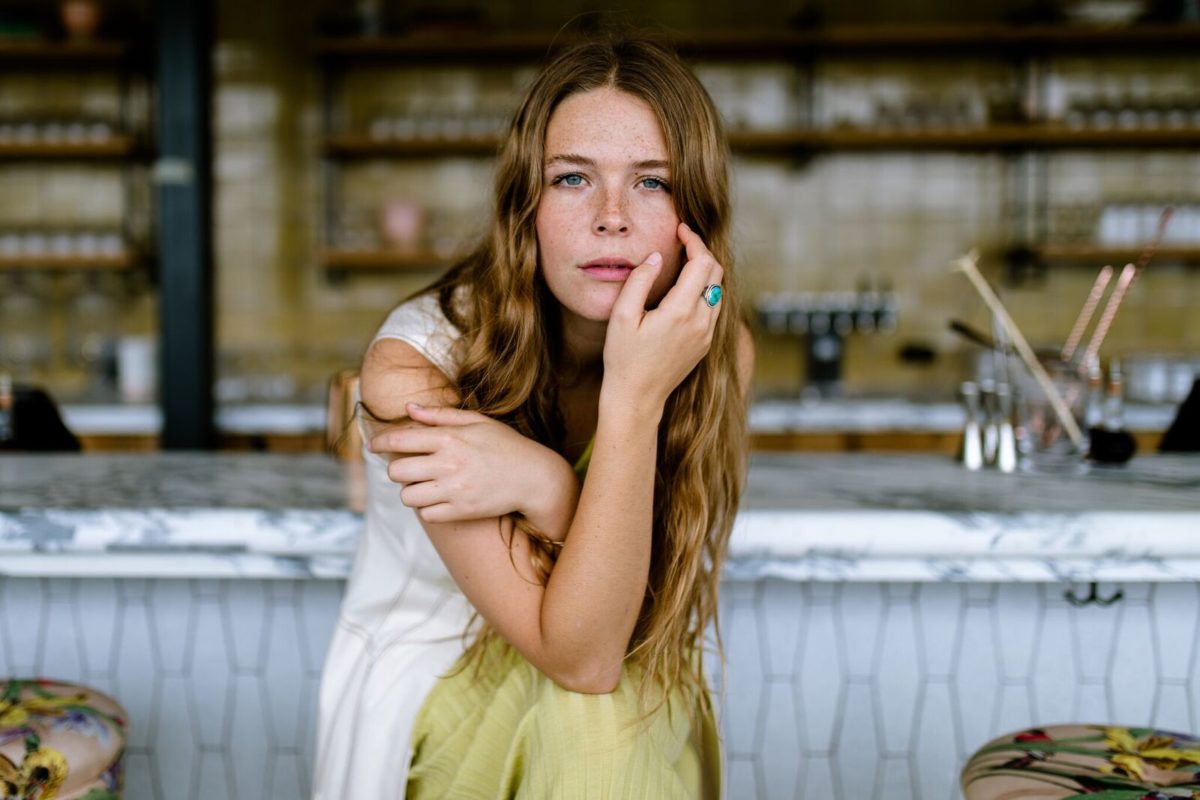 Rogers graduated from NYU in 2016, then spent another year in the city before leaving it all behind for a life on the road.

The lines on her map quickly began to disappear in 2016 when rapper Pharrell Williams hosted a master class at the Clive Davis Institute of Recorded Music at New York University, where Rogers was a student at the time, and a video of his reaction to Rogers’s single, “Alaska,” went viral. (“I have zero, zero, zero notes for that,” Williams tells a stunned Rogers. “You’re doing your own “You’re doing your own O thing. It’s singular.”) The next year, she released her EP; that first single has garnered over 65 million Spotify plays to date.

“What’s today, Thursday?” she asks, once we’re situated on the Hoxton’s roof, overlooking the East River and Manhattan. I’ve asked her when she arrived in New York, and she’s working backward to figure out the timeline. “Sorry, it’s crazy that that’s the hardest question,” she says. After graduating in 2016, Rogers stuck around New York City for a year before moving out of her apartment. Then it was back to her parents’ house, sort of, which served as home base as she toured her EP around Europe and North America, touching down at festivals including Lollapalooza, Glastonbury, and Governors Ball. Before this trip, she had only made it back to the city once, to give a lecture at her alma mater.

“Traveling is always going to influence the music and that’s what matters to me more than anything.”

So she’s hitting a few of her favorite haunts while in town: Enid’s in Greenpoint and Decibel in the East Village; she wishes she had time for Lovely Day and Veselka, but those will have to wait for her next visit. From here, she’s on to Atlanta and Nashville before touring with Mumford & Sons, then kicking off her own tour in 2019.

“I always really loved long-distance backpacking, and touring kind of feels like hiking, because you are similarly nomadic in the way you’re moving every day and every item you have with you feels very purposeful,” Rogers says. “I’m definitely fight-or-flight, but it feels wild and exciting. I want to see the world and I want to get everything out of this lifetime. Traveling is always going to influence the music and that’s what matters to me more than anything.” 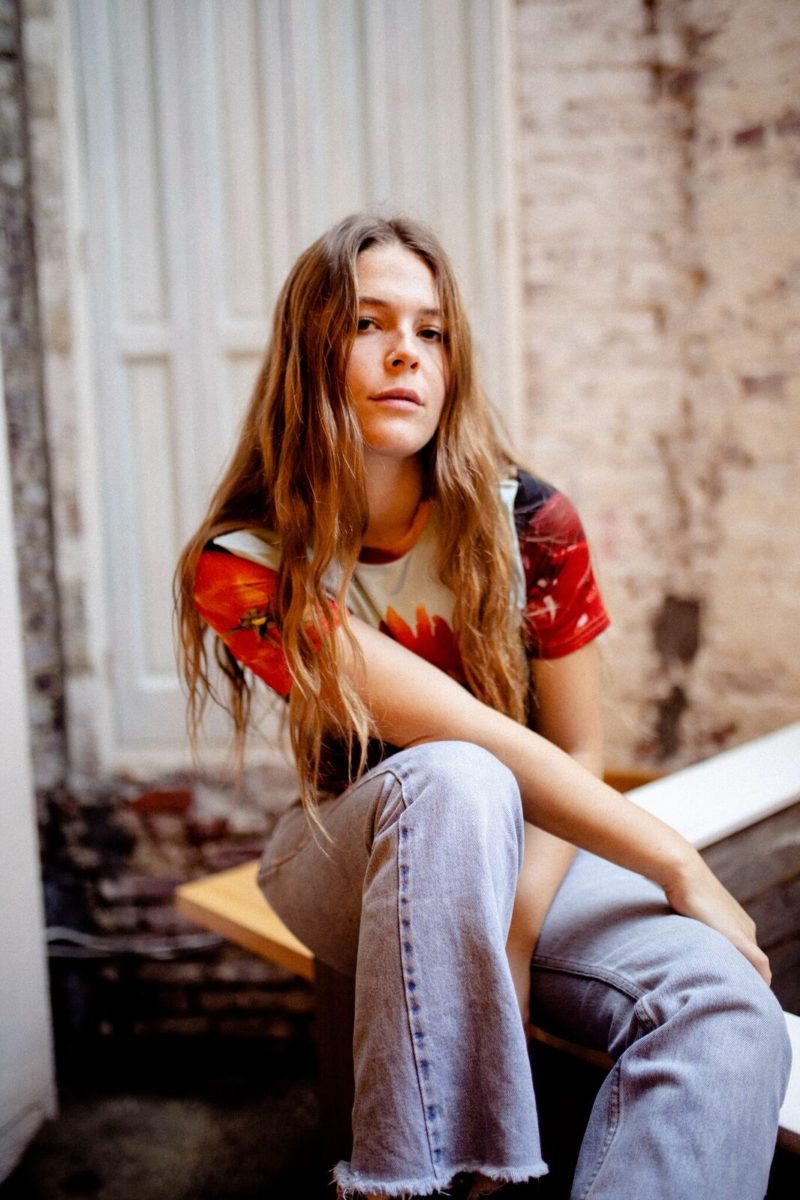 Maggie Rogers inside The Fat Radish in NYC. 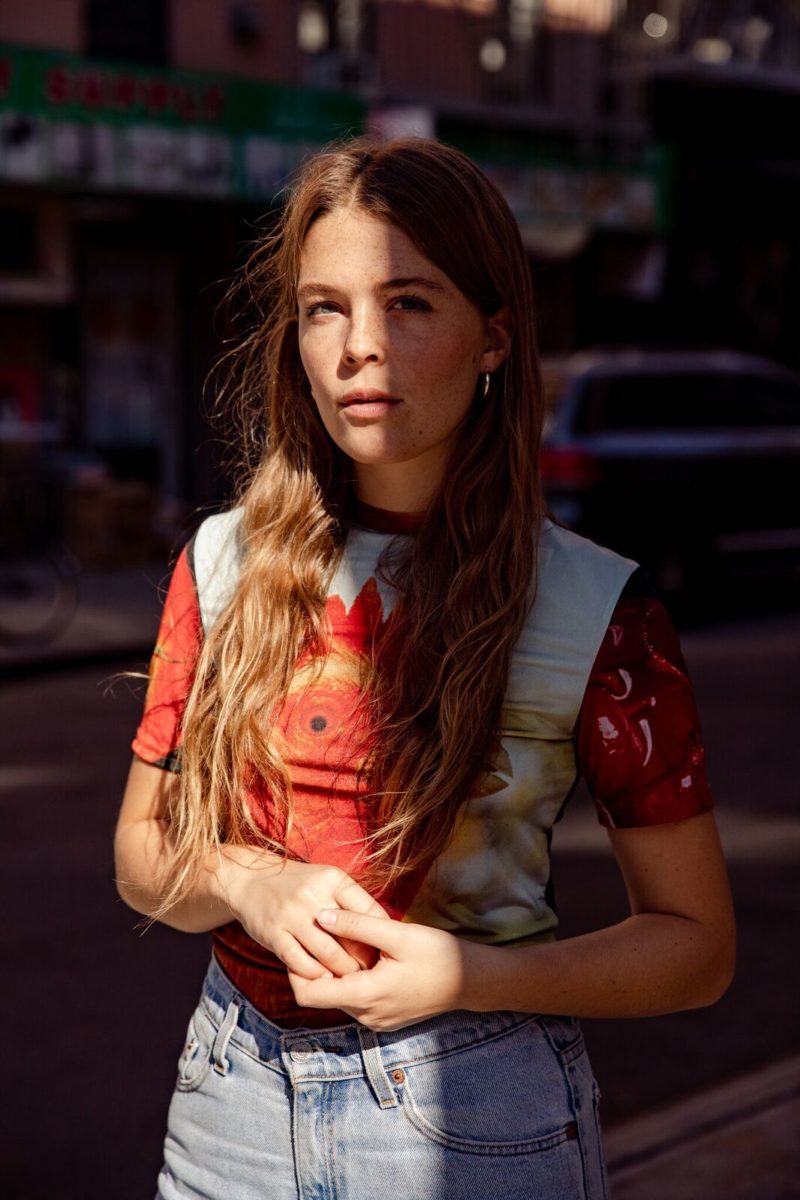 "One of the biggest things I've learned is to be really careful with my energy output" says Rogers.

Rogers is working—harder than she expected—to put her music first. “The first time I was on tour, I think that was the weirdest thing: Suddenly I had this job as a professional musician and it actually meant that I was less creative than I’d ever been,” she says. “When there’s so much input, it’s really hard to synthesize and have creative output. There’s this great quote [by William Wordsworth] that says poetry is ‘emotion recollected in tranquility,’ and there wasn’t a lot of tranquility.”

At the root of all of this is someone who’s attempting to navigate a new role without losing herself—someone who grew up in rural Maryland and “spent a lot of time indoors, alone, working on a computer.” Back then, her boundaries were easily defined, and within them, she was able to formulate both the music she wanted to create and the person she wanted to be. As her work and her name gather more attention, it’s becoming increasingly important for rogers to advocate for herself by protecting where she spends her time and emotional energy. “Right after [I finish a show], the first thing I do is shower because there’s something about trying to shed that energy as quickly as possible…” she says. “One of the biggest things I’ve learned about traveling so much is that I’m really careful with my energy output. Trying to remain healthy and sane while your body is processing that level of adrenaline can be really disorienting and sometimes overwhelming.”

During a second photoshoot in chinatown a few weeks later, Rogers takes intermittent breaks to walk around the block, clear her head, and try to process this part of her job—the photoshoots, the interview. This isn’t her favorite way to spend her time, but it’s a necessary byproduct of success.

“I’m starting to establish a sense of normalcy within the completely abnormal.”

Rogers is not only stating her needs, she’s also revealing her vulnerability, teaching the rest of us that withdrawing into oneself isn’t cold or standoffish, but an act of self-love and self-preservation—and the only way that she can continue creating art that is meaningful to her.

“Over this past year, when I was freaking out and really overwhelmed, one of my mentors told me, ‘You’re having a completely normal reaction to a completely abnormal situation,'” she says. “I feel much stronger going into this second round [of touring]; I know how everything works, and I think it’s going to take a little bit less energy from me to keep up with the process. There actually might be a little bit more brain space to explore new cities and create on the road because I’m starting to establish a sense of normalcy within the completely abnormal.” 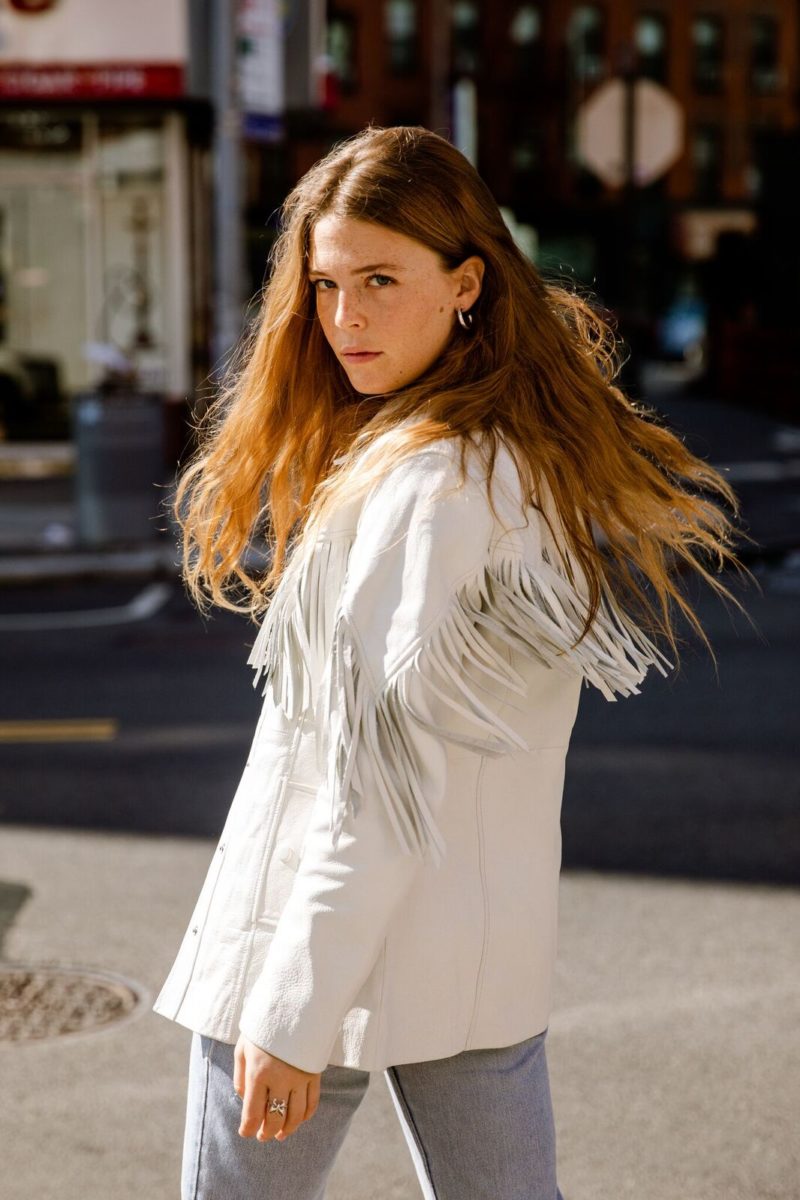 Rogers believes the Empress tarot card that she keeps pulling from her deck is in line with her approach to album writing. “That card is basically supreme control over your emotions and connection to purpose, which is self- explanatory for my record-making process.”

She’s already itching to work on her next album (“What I’m really excited about is the beginning and the ending of putting a record out”), but first, she’ll be touring “Heard It In A Past Life” for the next six months. It’s an album she created with performance in mind. “I’m really excited to get to go play these songs around the world because I made them so specifically thinking about the stage and what I was going to want to play and sing and dance to every night,” she says.

Though undoubtedly her fans will be singing and dancing along, underneath her upbeat melodies Rogers is revealing more than her ability to write catchy music. Would you believe me now / if I told you I got caught up in a wave? is the opening line of “Light On,” which directly confronts the previous two years of her life. The accompanying music video shows the mundanity of being on tour: brushing her teeth under fluorescent lights, looking out the window of a middle-of-nowhere diner, sleeping in the backseat of her car. Can you feel me now / that I’m vulnerable in oh-so many ways? the song continues. Just before the chorus, Rogers sings the refrain of friends, family, and acquaintances responding to her rapid success: You should be so happy now.

In this “last of the quiet time,” as she calls it, Rogers is back in her childhood bedroom, forcing herself to stay in one place, making self-imposed boundaries while she still has that option. Even still, it’s difficult for her to come to a complete stop. After her last tour, she took two months off and got her motorcycle license. Now she spends time cruising the back roads around her parents’ house. “It’s become this really important part of my mental health,” she says.

And there it is again—that startling self-awareness that’s allowed her to not only adapt to her new life, but to flourish. “I had this giant change that happened when my very private life became public,” she says. “This is a record about change.” It’s also a record about Rogers’s representation of a femininity that is struggling, beautifully, to exist in a world without boundaries.

Lucky for us, we get to witness this Empress rise. 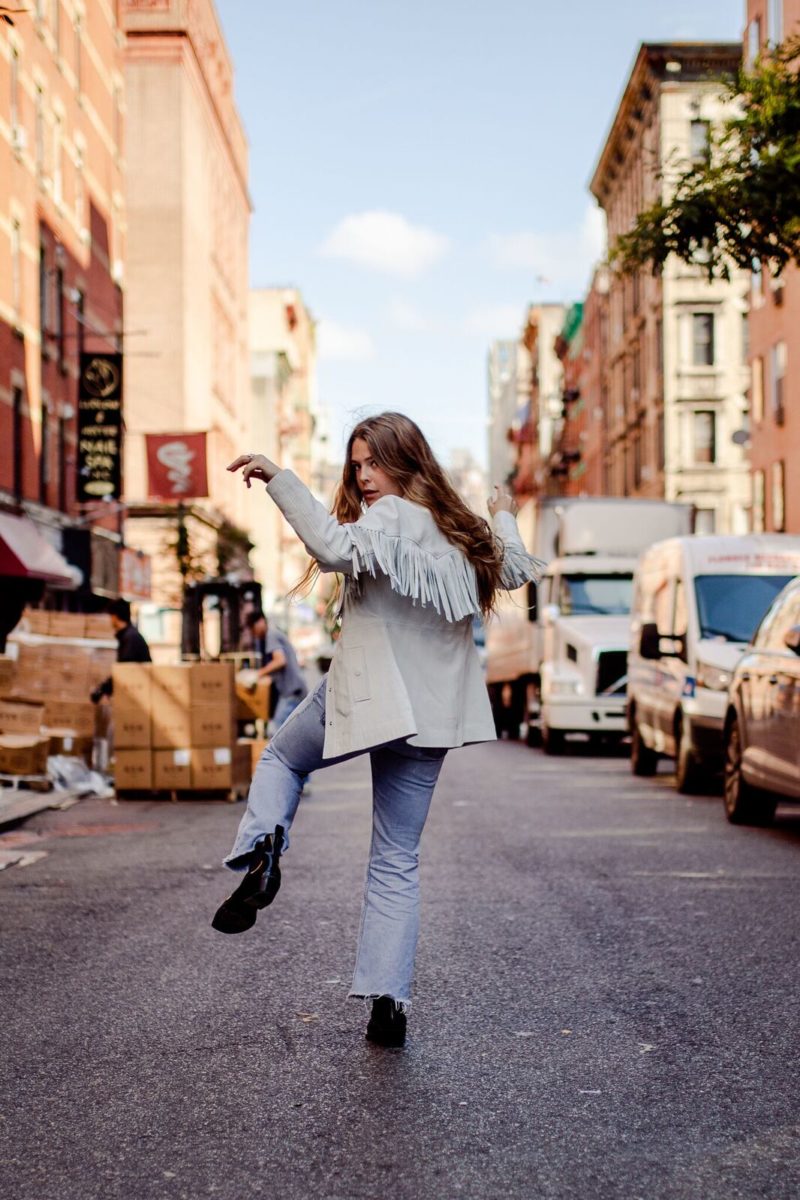