Why Sustainable Travel Comes With a Price Tag: Supporting Communities and the Environment in Vulnerable Countries

View from the top of Bartolomé Island, one of the 13 islands that make up the Galapágos.
DispatchAlly Betker

Luxury travel experiences, like those found at Pikaia Lodge in the Galápagos Islands or The Bushcamp Company in Zambia may be expensive, but they prevent overtourism, actively protect the environment, and engage the local community.

On a van ride back from a 500-acre tortoise reserve on Santa Cruz Island in the Galápagos, someone in our tour group wondered aloud if we were all a bunch of “elitists.” We were spending the week at Pikaia Lodge—a luxury eco-resort that costs over $1,000 a head per night, which is only available to a certain subset of people, they reasoned.

Our Ecuadorian guide, Luis Rodriguez (aka “Champi,” short for Champion), had just been telling us that the Galápagos receives about 250,000 visitors each year, which is relatively small compared to destinations like Hawaii and the Canary Islands. Champi is an advocate for the high-end tourism that places like Pikaia Lodge promotes, because it means getting more money from less tourists. In the last 10 years, he told us, 200 private yachts provided the Galápagos with $9 million at a cost of only 2,000 visitors. By comparison, the local fleet, which charters 90 boats for less expensive overnight and day trips, brought in $4 million and 800,000 people.

Consider the perspective of the Galápagos giant tortoise, or Zambia’s endangered elephants. The tortoise and the elephant care about their food, shelter, and a clean habitat—and want just enough people visiting so that all those things are paid for, but not so many that their ecosystem is disturbed. Consider also that space in the Galápagos Islands and Zambia is a scarce good. An economist would say there are two ways to ration a scarce good: a lottery system, or the price tag—and for many countries, price is the most efficient way to ration their resources. Humans may cry that this isn’t fair, but our friends, the Galápagos giant tortoise and the Zambian elephant, frankly don’t care. 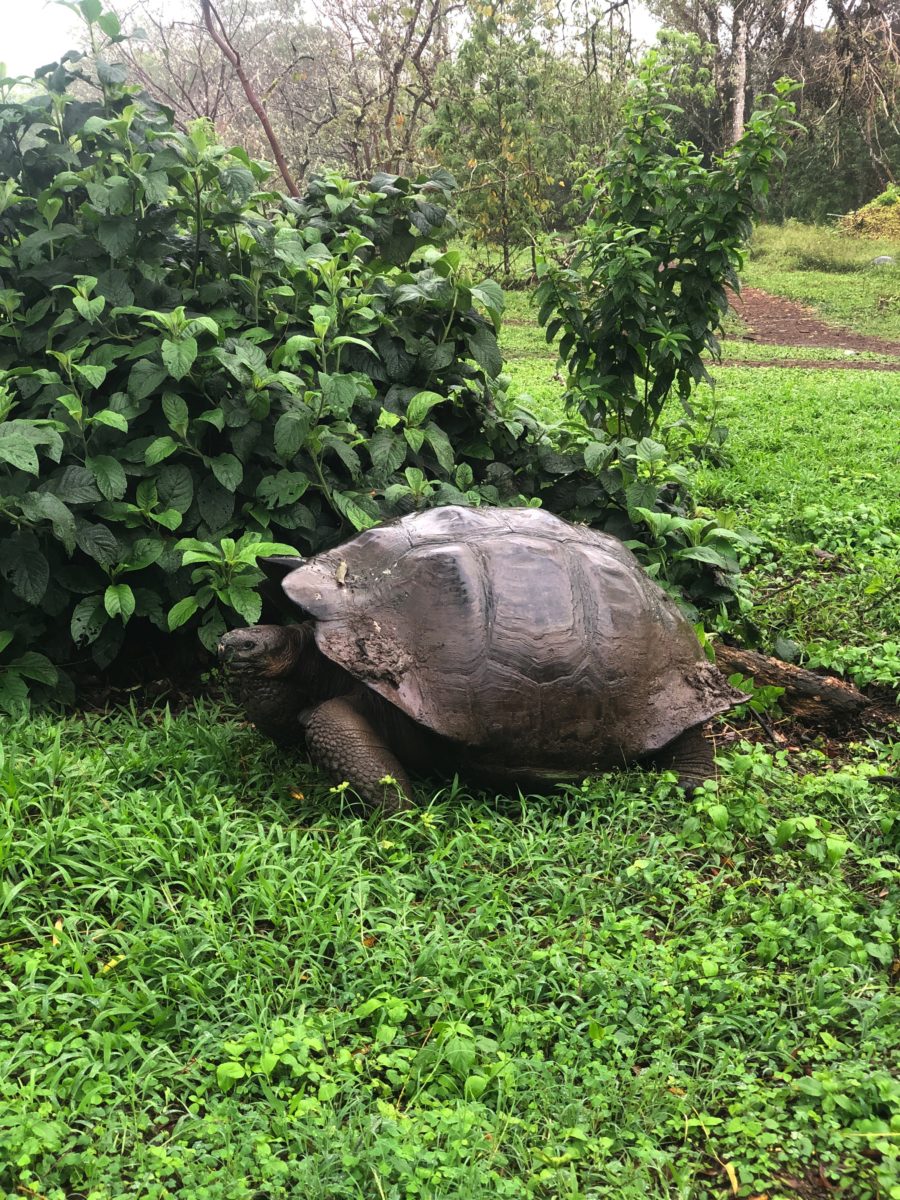 The famous Galápagos Giant Tortoise. They can reach up to 550 pounds. 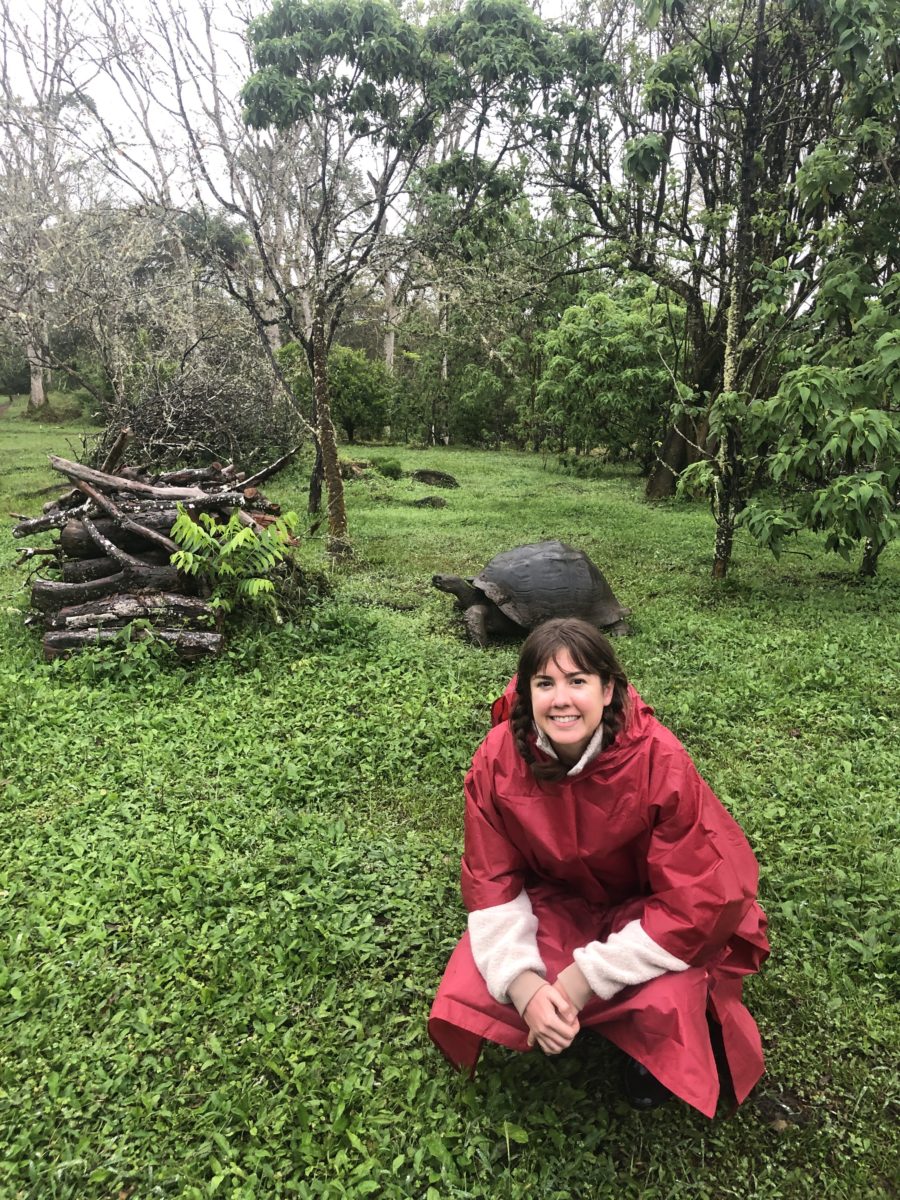 At El Chato Giant Tortoise Reserve, you can look (and pose) but you can't touch.

Overtourism Is A Growing Concern

Overtourism is especially concerning in the Galápagos because of the delicate balance that needs to be preserved across the 13 islands’ unique ecosystems. Too many people would disrupt the animals’ predator-free environment, permanently shifting the way they interact with each other and with visitors. The fearless nature of the island’s sea lions, giant tortoises, crabs, and penguins is what makes visiting in the first place such an incredible experience.

Today, 97% of the Galápagos Islands are protected parkland, with only 3% privately-owned. When development and agriculture began increasing in the 90s, a 133,000 square kilometer marine reserve was set aside. These are a few of many ways Ecuador is protecting its natural environment—the country also limits the number of boats that can anchor at each island, has implemented colossal fines for harming animals, and carefully regulates fishermen. 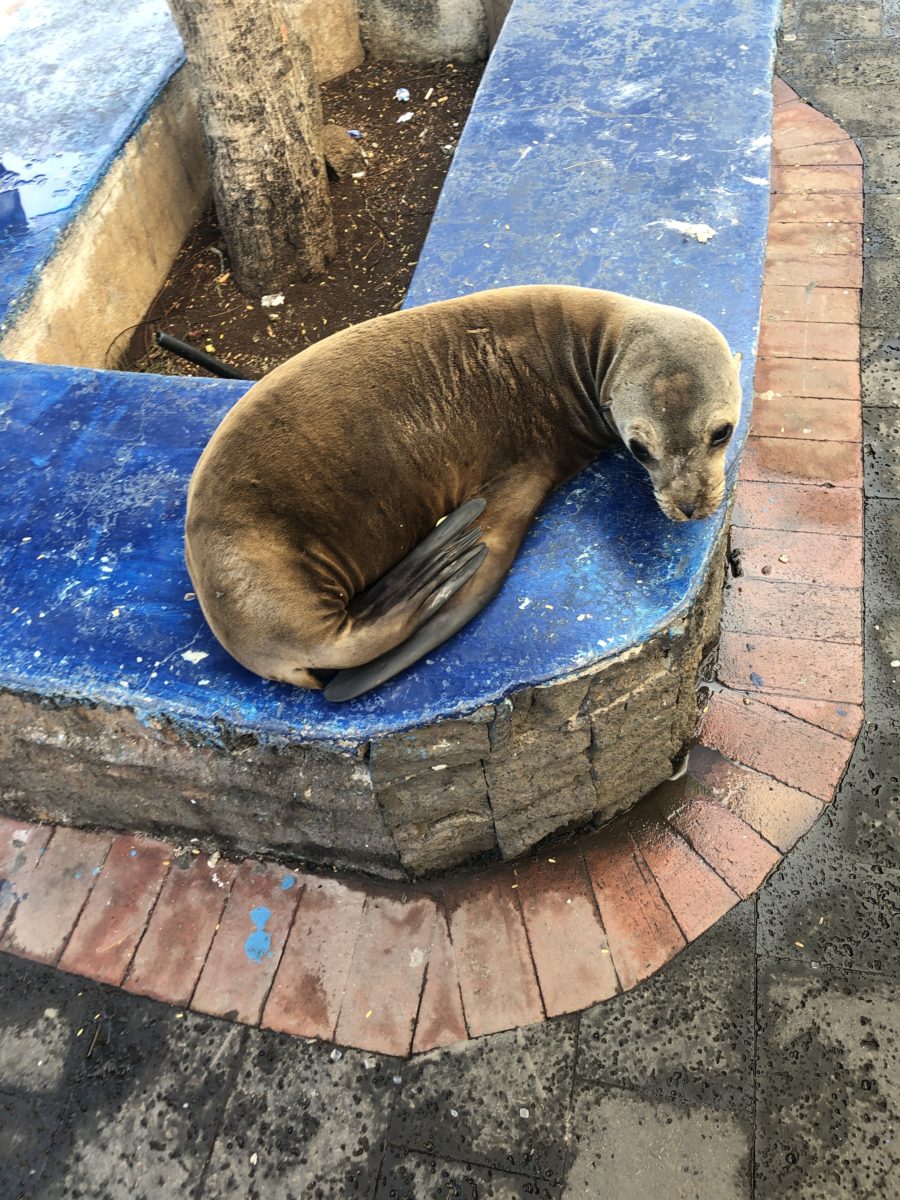 Animals in the Galápagos Islands live without many natural predators, which means they have very little fear and have no problem taking a nap right next to a busy fish market. 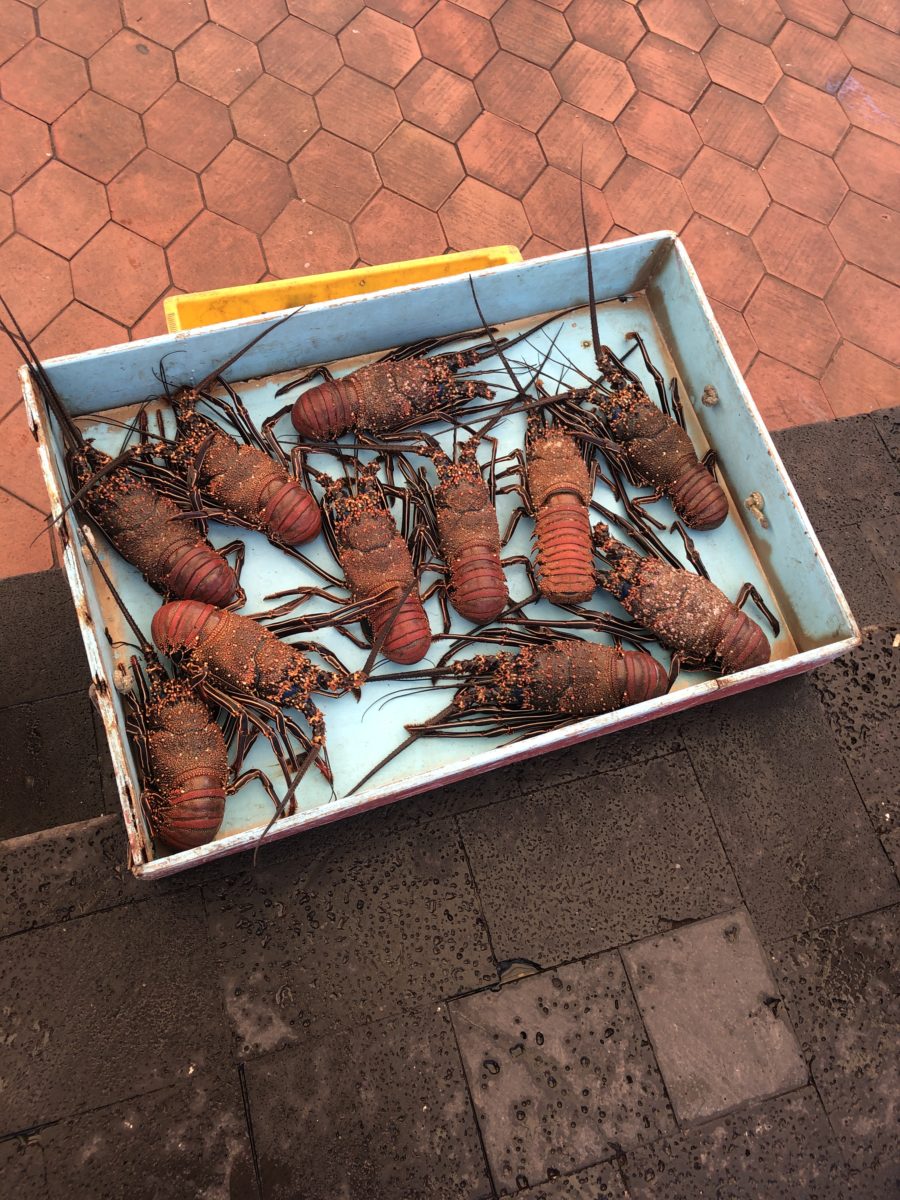 At the fish market in Puerto Ayora, fisherman are carefully regulated to make sure that none of the female lobsters they catch are pregnant. 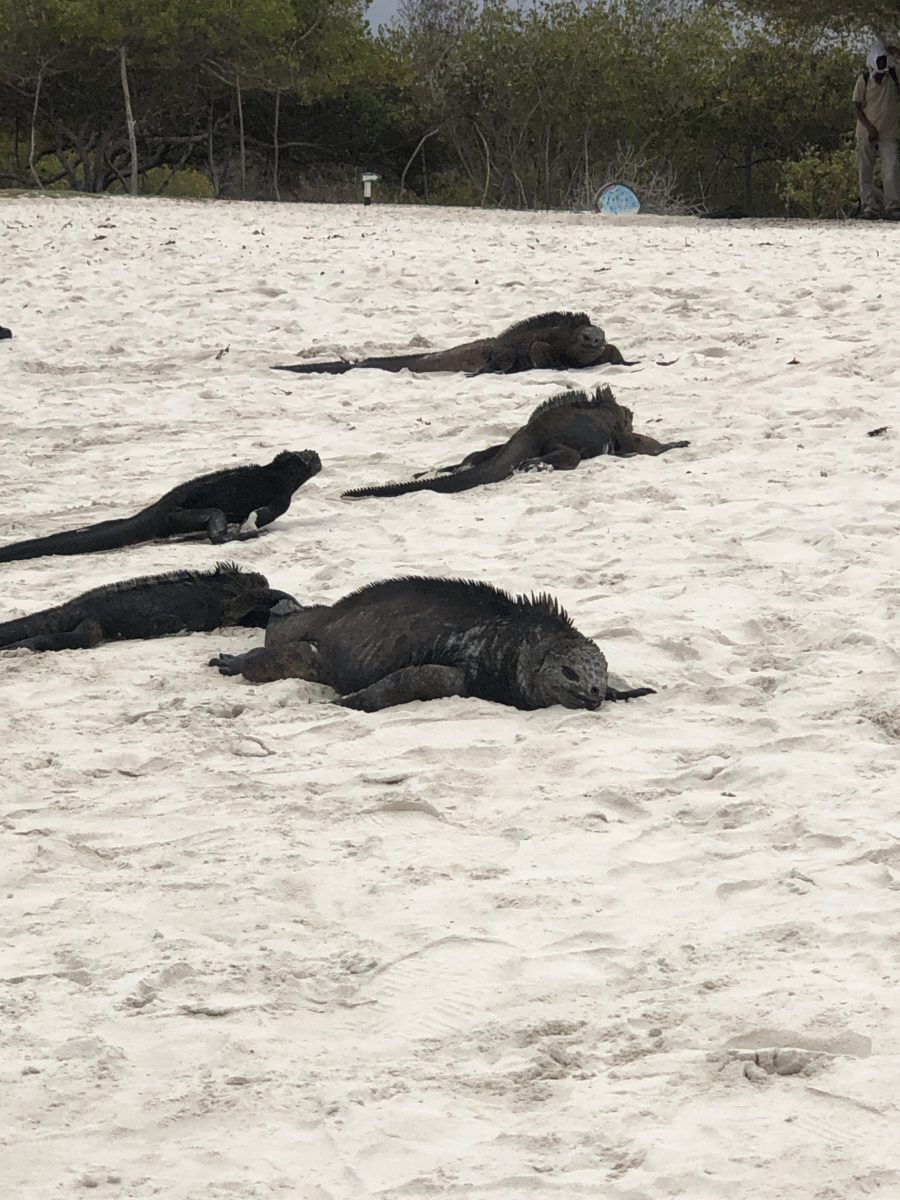 Marine iguanas are only found in the Galápagos Islands, and have the unique ability to swim and forage for food in the sea. 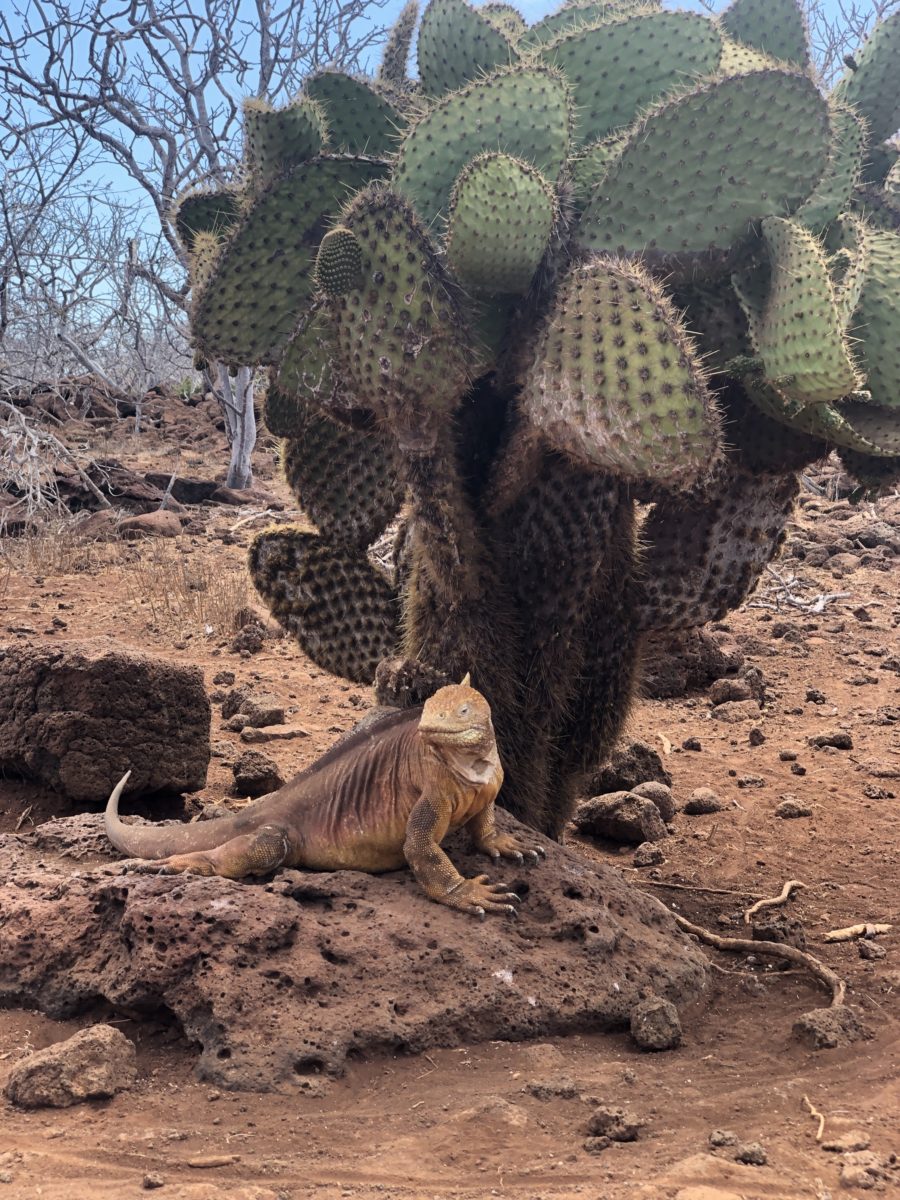 A land iguana finds protection from the brutal midday sun in the shade of a cactus.

Is Cheaper Travel a Good Thing?

Travel has gotten remarkably cheaper over the past decade—flights today are basically half of what they cost in the 70s when you account for inflation—making it more accessible than ever to hop on a plane all the way from Asia to South America, or the U.S. to Australia (Qantas has started trialing a non-stop route from New York to Sydney; at 19.5 hours, it will be the longest route in the world).

But as the effects of travel on the environment become increasingly clear, should everyone be traveling a little bit less?  The carbon emissions from a flight from New York to Los Angeles, for example, are enough to melt 32-square feet of the Arctic summer sea ice. The emissions amount to one metric ton. 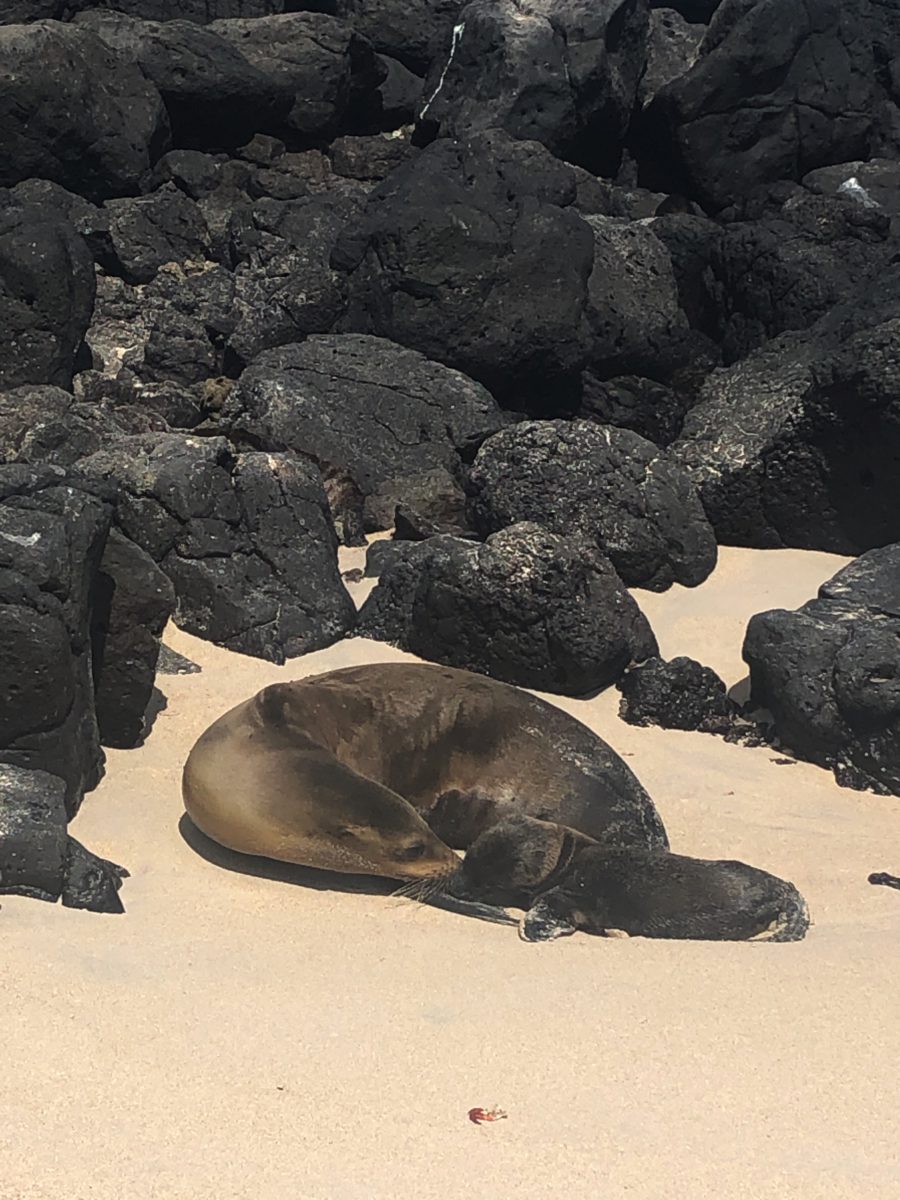 A sea lion mom and pup on Santa Cruz Island in the Galapágos. 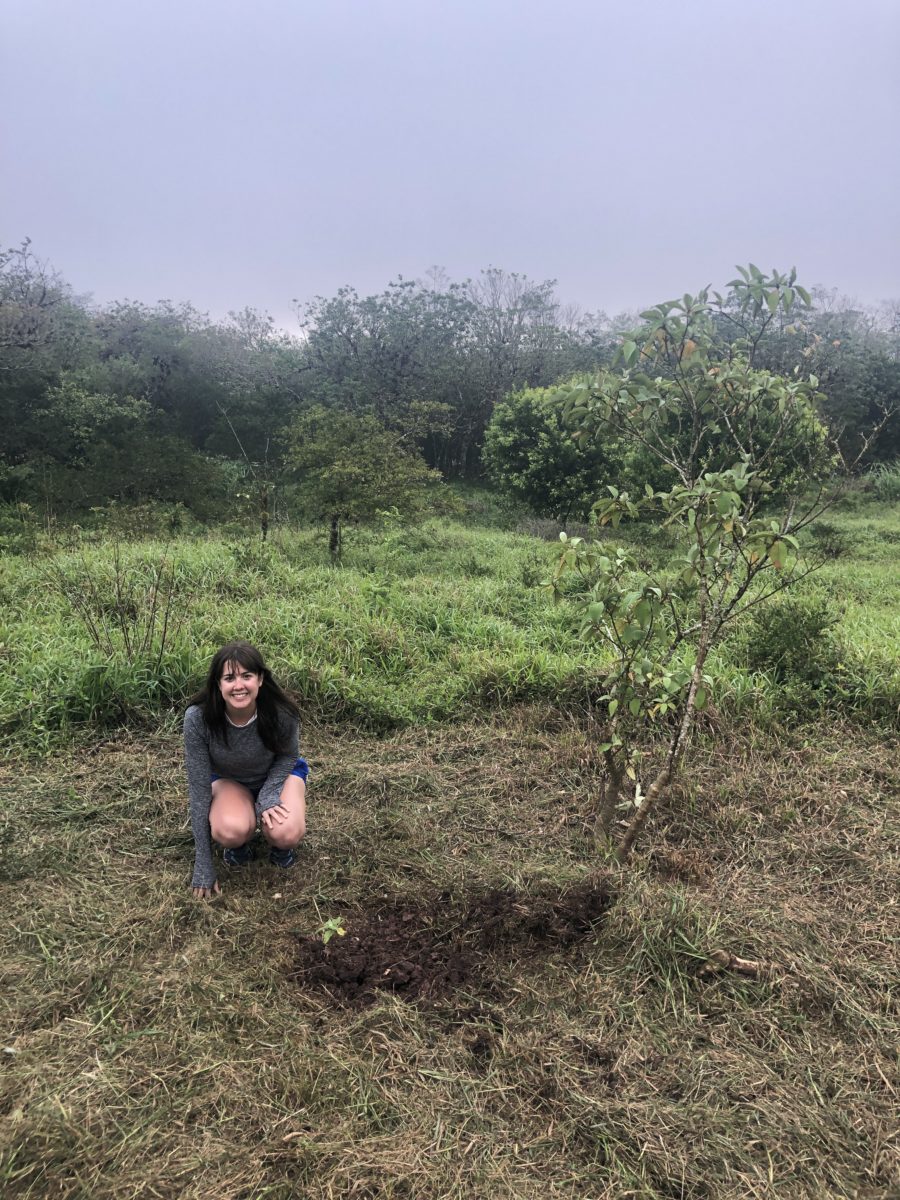 At Pikaia Lodge, guests can plant their scalesia tree as part of the company's commitment to reforestation.

When you do travel, there are plenty of ways to support businesses that are working to counteract these effects, including offsetting your carbon emissions and being thoughtful about where you stay. And people are increasingly searching for travel experiences that give back; a recent survey by Travelocity showed that one in four travelers planned to volunteer on a trip in 2019.

Still, some guests come to Pikaia Lodge and the Galápagos for the wrong reasons and with the wrong ideas. “Some people come here and they expect Monaco—with limos and helicopters to take you around,” says Adrian Serrentino, the Lodge’s marketing manager, adding that he’s seen people get upset that they can’t sit on or touch the Galápagos tortoises. “That’s not what the Galápagos is. You come here to adventure, to take part in conversation and protectionism, to learn about the environment,” he says. “Everyone’s priority is to protect the land, and to protect the dynamic between animals and people. You’re coming here as a visitor, but even the Ecuadorians consider themselves visitors here.”

For their part, Pikaia Lodge has planted over 12,000 scalesia trees on their privately-owned property, which provide food and nesting for birds, shade for tortoises, and combat invasive species. The Bushcamp Company, a sustainable safari tour operator and hospitality company in Zambia, supports local wildlife organizations including Conservation South Luangwa, the Zambian Carnivore Program, and the Department of National Parks and Wildlife, to combat issues such as poaching, rapidly growing human economies, and a lack of information on wildlife species. The Bushcamp’s Luangwa Conservation Community Fund, which supports both environmental and community initiatives in villages around the South Luangwa National Park, has raised 3 million dollars to date. Those funds have been used for substantial investments such as an aircraft for aerial anti-poaching and research activities. 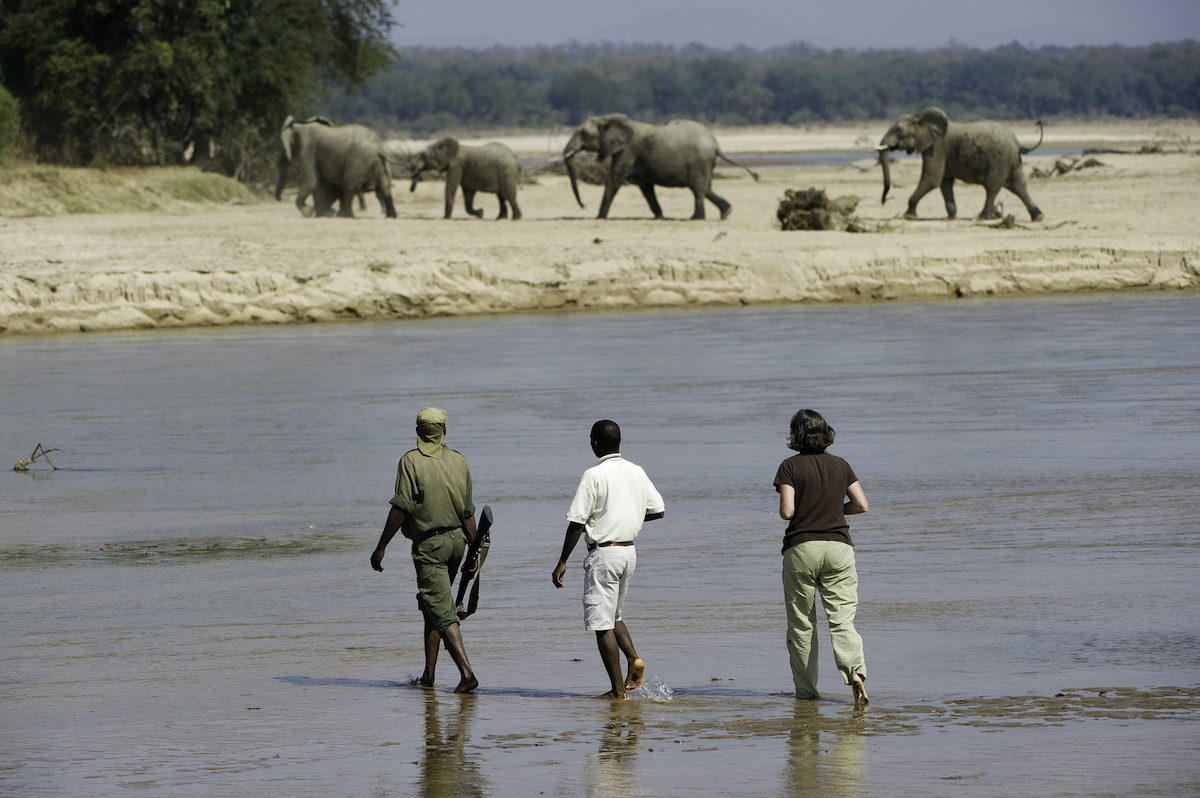 An elephant crossing is a site to behold, especially on a walking safari led by a local guide in South Luangwa National Park, otherwise known as "The Valley of the Elephants." Image courtesy of The Bushcamp Company.

The impact these two companies make go beyond the environmental. Pikaia Lodge recently started to work with the local Tomas de Berlanga School, which specializes in languages and science, providing training for teachers.

The Bushcamp Company provides 2,500 school children in the surrounding area with one meal a day. “I think that has helped kids go to school, even if it’s only to get the food,” says Andy Hogg, who co-founded the hospitality company 20 years ago. “But I think by default that means they’re learning something.” The Bushcamp has also built classrooms at nearby schools, creating capacity for 700 additional children to receive an education. “We see kids grow up and go into medicine, engineering, and pharmacy work now,” says Hogg. “10 years ago that certainly didn’t happen.”

Hogg has also overseen the construction of roughly 112 boreholes, which provide clean water to 300 people daily, an $800,000 investment. And he’s hired locally for his 25 guides that lead people into the bush for safari tours each week—there’s only one expatriate bushcamp manager on staff, he notes. Beyond excellent jobs, guides receive support for medical, schooling, and housing expenses. 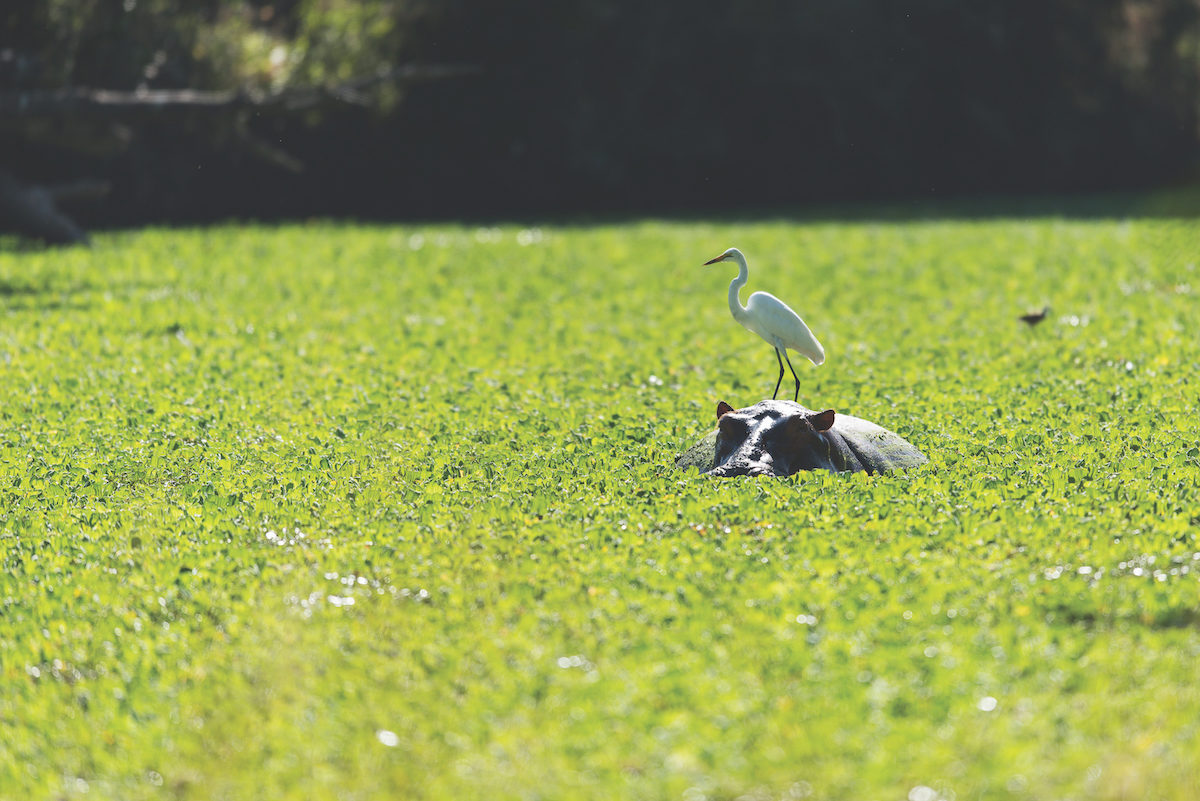 It may be easy to criticize luxury tourism as non-inclusive, but it’s a little more complex than that. Making a visit unaffordable to most inherently minimizes negative effects and raises funds for much needed resources. The Bushcamp Company starts at $440 to $550 per person/night, while Pikaia Lodge starts at $1,000 per person/night. A recent article in the New York Times pointed to the development of budget-friendly hotel options as a reason why land-based tourism jumped 92 percent in the Galápagos between 2007 and 2016—a number that’s highly concerning to conservationists because of the potential threat to beaches and wildlife.

And that’s not to say that high-end hotels are the only way to travel sustainably or access more difficult-to-reach places like the Galápagos Islands and Zambia. Some more affordable hotels are starting to cater to a rise in voluntourism, like the Jicaro Island Lodge in Nicaragua ($380/night), which has a program that uses solar panels to provide energy and clean water to a local school, or Panama Jack Resorts Cancun ($177/night), which has formed a “Turtle Protection Committee” to ensure that the beaches are in excellent condition for nesting season. The Galápagos Conservancy partners with Silversea and Celebrity Cruises, whose itineraries are still pricey but include airfare.

For my part, a trip to the Galapagos opened my eyes to the true pros of responsible high-end tourism. Doing your research ahead of time and actively investing in the hotels and tour companies that are looking after the environment and their community makes it worth the price tag. It may seem counterintuitive—as a travel writer, I want everyone to be able to see the world. But in order for that to happen, we need to protect the world that we’re traveling in.