“I’m having one of those ‘What is my life?’ moments,” says Karlie Kloss. “I’m sitting in a parking lot on suitcases—that I designed!”

We’re in the Playa del Rey neighborhood of Los Angeles, outside an office building with picnic tables and tents in its courtyard. Kloss, 25, is perched atop half a dozen or so Away suitcases, a near-replica of her own Instagram post where she’s sprawled across the top of a luggage trolley, en route to Paris or London or maybe Hong Kong. It’s how she spends nearly half of her life—in transit for modeling gigs, appearances, or, more recently, Kode With Klossy, her coding camp for teenage girls across the U.S.

Earlier in the day, five of the scholars from her camps gathered at WeWork in Playa Vista for the first half of our photo shoot. Between camera clicks, Kloss played M.A.S.H. and word games with the girls while teaching them tricks of the trade, like how repeating the phrase “Merry Christmas” keeps your face relaxed and in a perpetual smile. “Water, food, and retouch; check your e-mail; call your agent,” Kloss joked to the girls as they marched in single-file back to the break room, every bit as lovely as her reputation suggests and then some. She was as at home with the teens as with stylist Karla Welch and hairstylist Matthew Collins, also on set. While a perfectly timed hair flip or a mischievous half-smile proves her prowess as a model, it’s her warmth and curiosity that has pulled her toward a life away from the cameras.

Kloss’s initiation into the world of tech and coding was swift, mindful, and partly happenstance. “I didn’t set out to immediately make a major impact or even assume that I would be a part of it,” she says, back in New York at the offices of Kode With Klossy. “I was just watching the world—specifically the fashion world—be transformed by technology.”

In a conference room at Kode With Klossy’s SoHo office, a map of the U.S. pinned with Polaroids marks each location where Kloss hosts a camp: Austin, New Orleans, San Francisco, and Detroit, among others. “Cities that I’d never been to, even growing up in America,” says Kloss. “It has been so eye-opening. I feel like I’ve had a very different kind of education through the places that I have been able to travel and people I’ve been able to meet. There’s so much that can be learned just by keeping your eyes and ears open.”

These days you’ll find Kloss on an airplane as often as not. “And that’s probably being conservative,” she adds. She has her packing down to a science—compression socks, sleep mask, melatonin, extra chargers, and a toothbrush in her carry-on; and audiobooks and apps such as Dark Sky and Headspace fired up on her phone. Come mid-April, an Away x Kode With Klossy collaboration means she’ll be traveling with Gigabyte (a shade of green) and Pixel (purple) suitcases, plus a backpack and cord case of her own design, which will also come in Binary (black).

“I try to get to as many camps as possible, and this summer we’re going to have a lot more,” she says. “I will be traveling domestically a lot.” 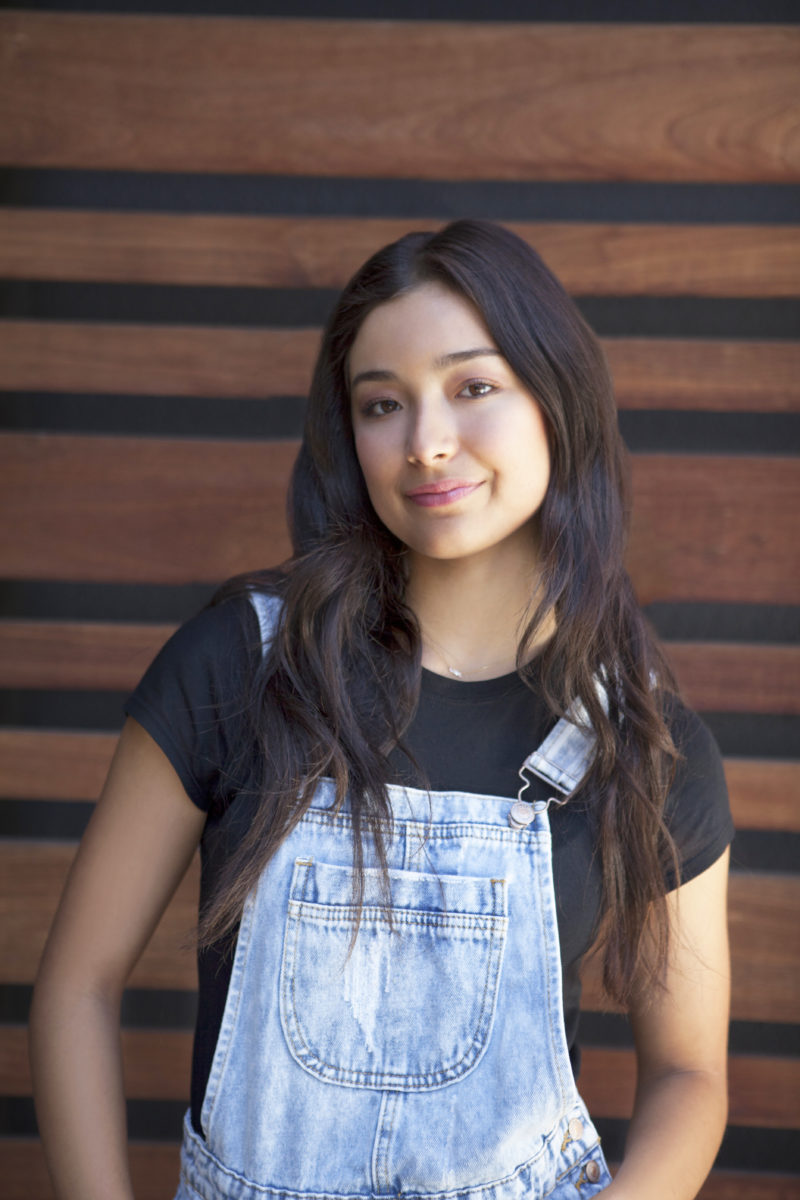 "Coding is a universal language that anybody can learn, anywhere, at any age. I used to think coding was a very isolating activity, and it wasn’t until Kode With Klossy that I realized it’s about problem-solving as a team." — Hana, 16
(Photo by Sarah Shreves) 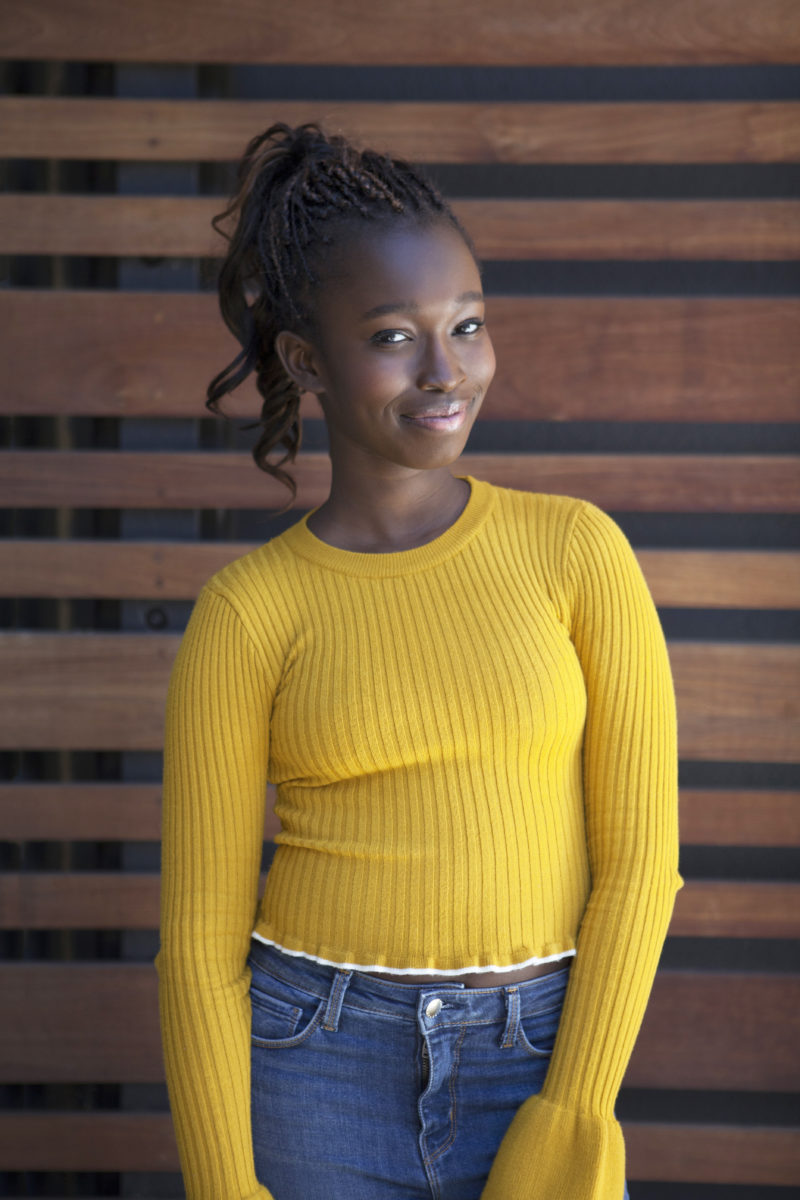 "It’s really important for girls to get involved with coding, and to have a seat at the table. Girls need to be a part of this technological shift, because if we aren’t, then all innovation will be one-sided. It’s like, what if you’re only seeing half of the possibilities?" — Sofia, 17
(Photo by Sarah Shreves) 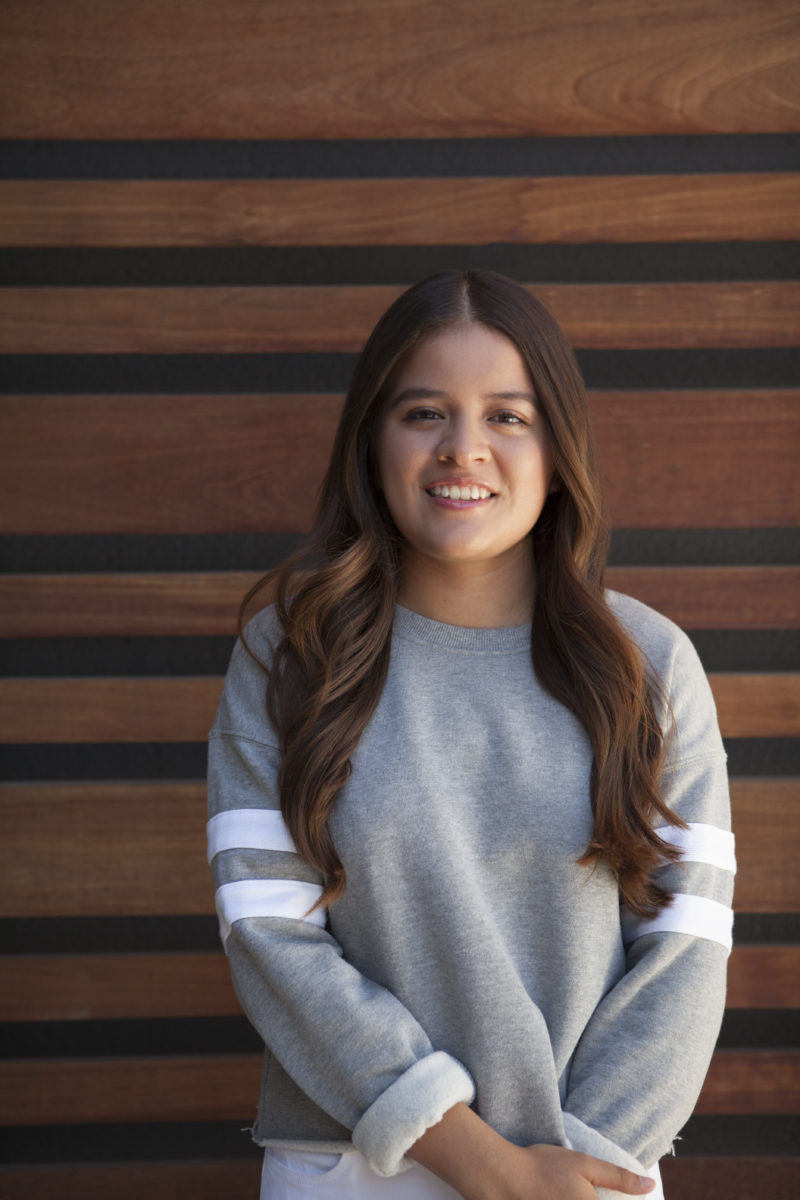 "I started a club in my school, where I teach Latina girls how to code. I want to start my own nonprofit organization to help Hispanics like myself be exposed to computer science and technology." — Diana, 18
(Photo by Sarah Shreves) 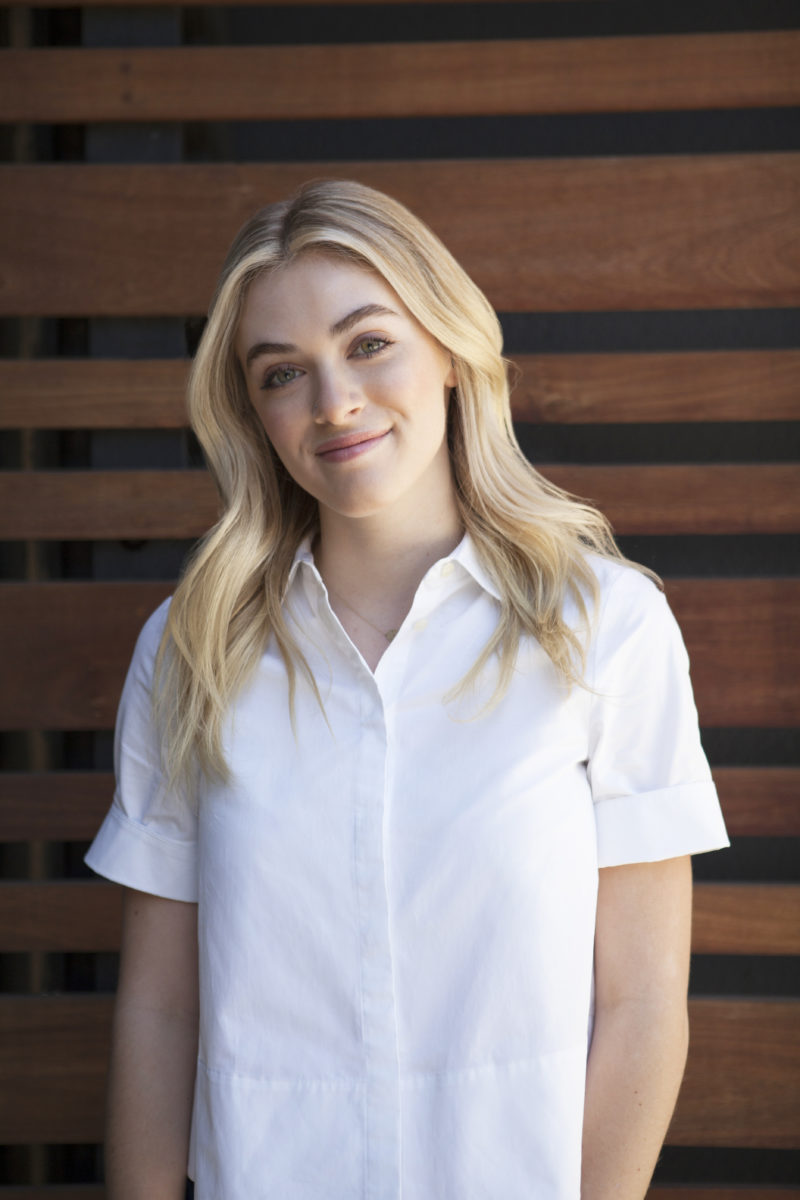 "I teach lunchtime workshops on virtual reality for girls and guys. I want to teach women how to speak up and get their ideas heard, and I also want to teach guys how to listen to women. If we can work together we can create amazing things." — Goldie, 16
(Photo by Sarah Shreves) 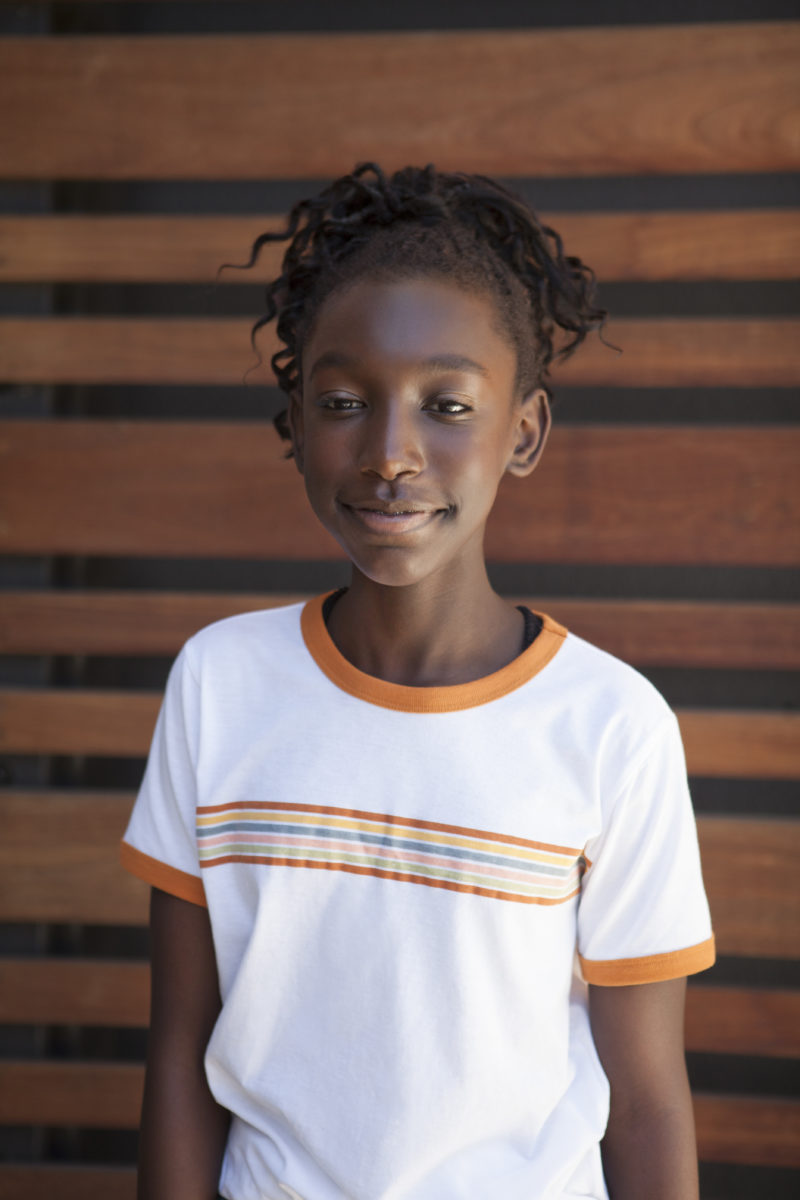 "Women should be in the STEM field because it’s important to see their ideas and point of view. Those ideas are obviously going to be different, and we need different in the world." — Jenny, 14
(Photo by Sarah Shreves)

Kode With Klossy is a community of girls ages 13 to 18 who attend two-week summer camps focused on the ABCs of code. The scholars gain valuable skills in front-end and back-end Web development by building their own apps. “This summer ahead is going to be really big for us,” says Kloss, alluding to the nonprofit’s plans for growth, which include expanding the number of camps, access to the curriculum, and teacher training, as well as by building year-round programming.

Already, though, the impact of the camps is evident. Over 500 young women have learned to code with Kloss, many of whom have used the skills to start coding clubs of their own, win hackathons, earn scholarships to Ivy League schools, or build and fundraise around apps. “It’s awesome to not only help light that spark in someone but also to watch the spark keep lighting other people,” Kloss says.

At this point, Kloss has a small fire of women primed to change the conversation about gender and tech. “They’ll enter the workforce and actually be a part of closing that opportunity gap that exists today,” she says. And here she thought she was just picking up a hobby. “We joke about it, that this is a secret language, a superpower,” says Kloss. “And there’s no limit to what they can do with it.”

I remember moment I knew Karlie Kloss would be a supermodel. We are both from St. Louis, Missouri, and she went to school with my younger sister. At their sixth-grade graduation, kids in slacks and pretty dresses shuffled across a stage, collecting “degrees” meant to springboard them onto the next dull year of junior high. When the principal got to surnames beginning with “K,” Kloss stepped up, taller than every other student by a foot, amplified by red heels. Her walk, even then, was runway-ready. A murmur went through the crowd of Midwestern parents.

I often think about how grateful I am that Instagram did not exist when I was in middle school. I already worried about what everyone was doing without me—perfectly filtered photos uploaded in real time most certainly would have pushed me over the edge of my preteen angst. How kids today get through a single hour of social media unscathed is beyond me, but after talking with Kode With Klossy’s scholars, it seems I need not be worried.

“They have their lives as together as any 13- to 18-year-old possibly could,” says Kloss, speaking of all the girls who have attended the summer camps. “But it’s a very different world even than when I was in high school. When you meet the girls, you see how much pride they take in their skills and what they know, and I think that really shifts the narrative around how you let something like Instagram [dictate] your self-worth. It gives you an extra boost of self-esteem and self-confidence. I think that having this skill set can really be a way to express yourself.”

For Kloss, too, coding is a new way to express herself—the conversation about her no longer revolves solely around her work as a model; people are talking about her contribution to women in tech. To wit, in 2018, Forbes named her to its annual list of 30 Under 30, with a cover story dubbing her “Coding’s Supermodel.” Kloss’s curiosity has snowballed into something much bigger than herself.

“With Kode With Klossy, I’m realizing all the ways that we can really shake the future of the tech industry, by equipping the future leaders of our world,” Kloss says. “I really believe that these young women are the future.”

With Kloss as their champion, it’s all but inevitable.