The French Riviera is far from an undiscovered hotspot, especially in places like Cannes and Monaco, which can feel so overrun with seasonal attractions like the film festival or Grand Prix races that their core identities often get lost in the mix.

But I’m here to tell you that there’s still magic to experience here—at times it can feel like a scavenger hunt for relics of the past, but there’s also some new gems to be enjoyed. And who better to channel for inspiration than the American film actress-turned-Princess of Monaco, Grace Kelly, who immortalized the epitome of Cote d’Azur summering in 1955 Hitchcock thriller To Catch A Thief? 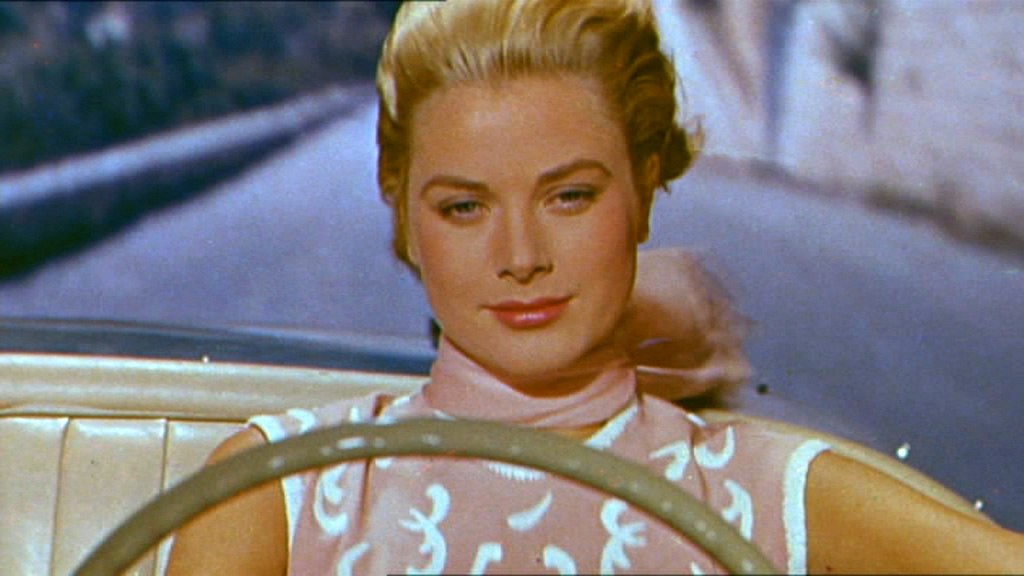 Grace Kelly in To Catch a Thief. Photo courtesy of Wikimedia Commons.

A summer excursion to the French Riviera may feel like a deep dive into the very history of vacationing. You will encounter tourists, it mostly won’t be cheap, but you’ll be embarking on a tradition that, if you can learn to embrace the unironically nouveau-riche, has maintained its decades-long status as a top destination for a reason. Plus, getting there has recently been made luxuriously more convenient with boutique airline La Compagnie‘s direct seasonal route straight to Nice—Grace Kelly would approve.

Though much of what the late Princess of Monaco would have enjoyed back in the day has changed, we have a guide to the Cote d’Azur that any modern day Grace Kelly would enjoy, from Cannes, where Kelly was introduced to the region, to Monaco, where she met and married the prince. I would say “goals,” but Grace Kelly is probably too classy for such colloquialisms. 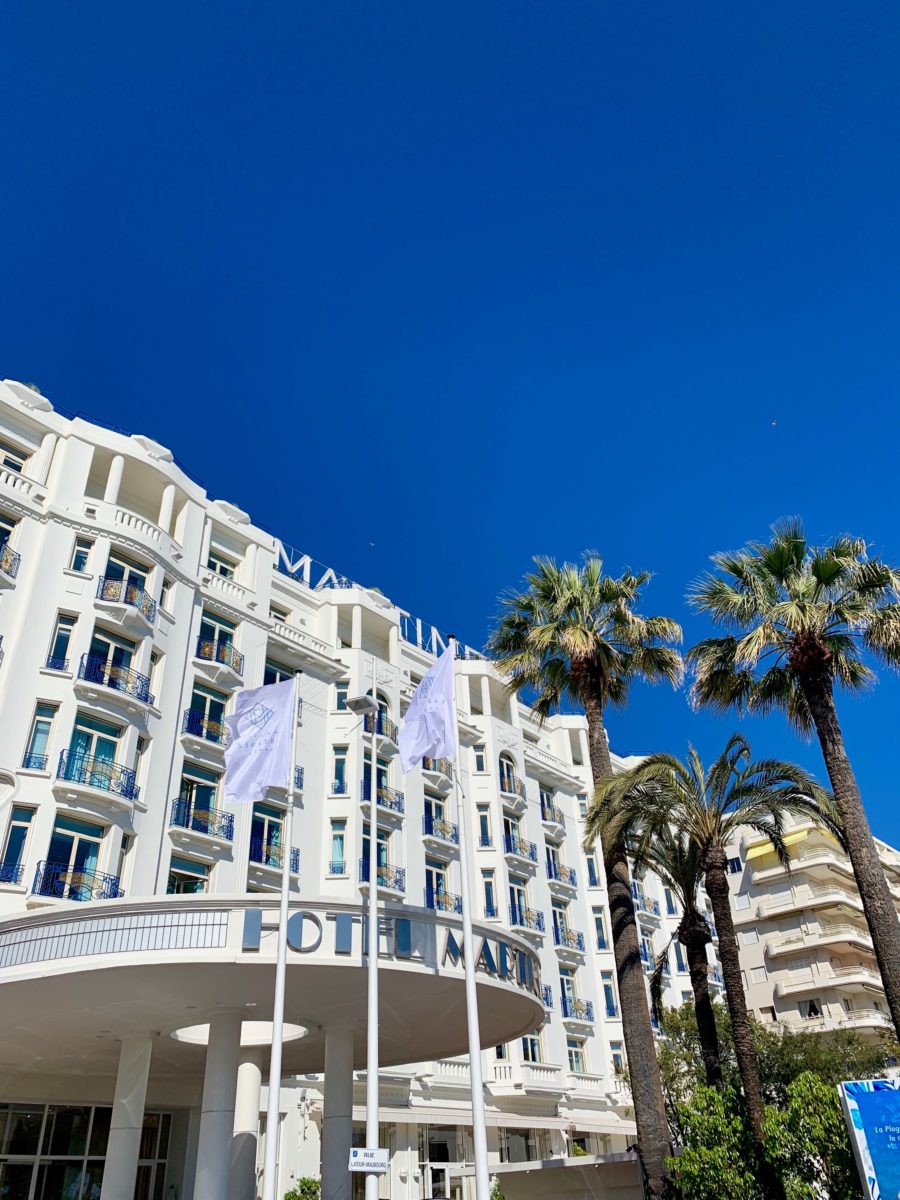 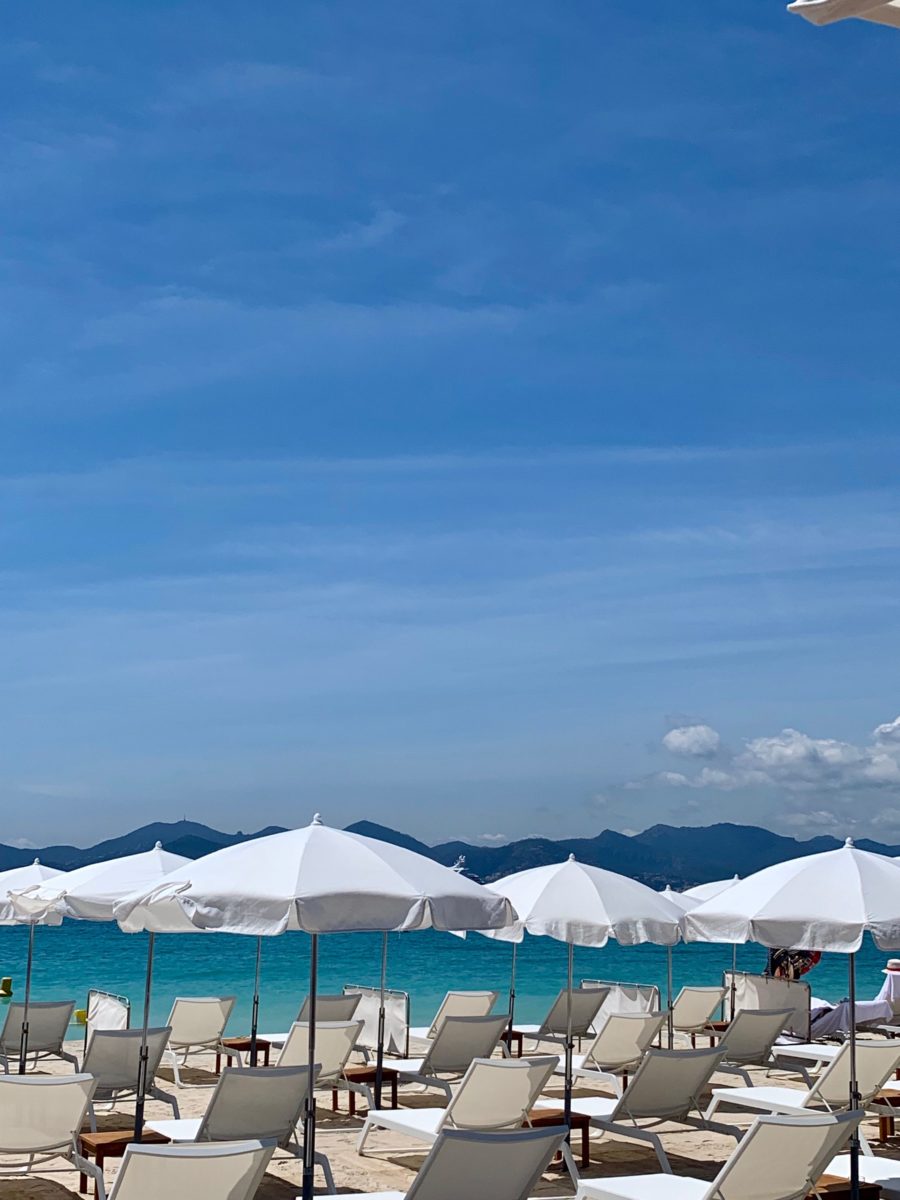 Though Grace Kelly’s character stayed at the Carleton in To Catch a Thief, these days, the stuffy, overpriced hotel is best admired from afar. Today, the chicest place to stay in Cannes is Hotel Martinez, with its recently updated rooms and lobby that maintain the original art deco character of the building. Their beach club has also recently been revamped and promises to be the best place to lounge by the water or party late into the night.

Though much about this city has changed since Grace Kelly roamed its grounds, Le Suquet is the one side of it that still resembles what it was like back then (and many, many years before that). Known as the “old town” of Cannes, the former medieval fishing village used to make up the entirety of the town before the film industry’s glitterati descended upon it. Up a small hill about a 15 to 20 minute walk from the main strip of hotels on the beach, explore the narrow streets on a morning stroll. Head to the Marché Florville to sample food from various local vendors—there’s also a Parfumerie Fragonard if you’re looking for local soaps and scents. Eat at family-owned (since 1935) Aux Bons Enfants for a traditional provincial lunch—with produce sourced from the nearby market—at a reasonable price.

It’s no secret that the Princess of Monaco was a little bookish—one of her legacies is a distinguished collection of Irish literature—and this bookstore cafe is the perfect place to enjoy a coffee and rest your feet  after walking around Le Suquet. 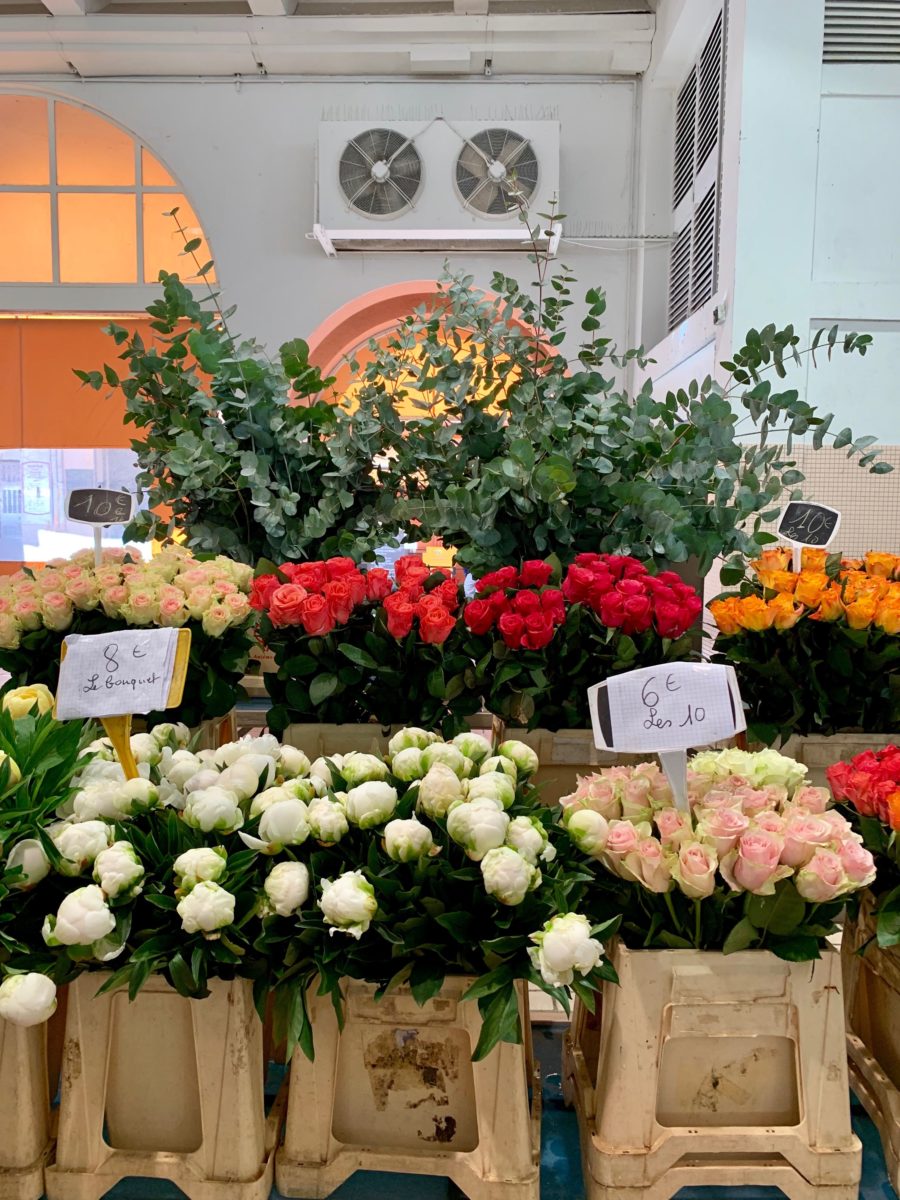 If Grace Kelly were a modern-day Instagram influencer—the kind whose taste you actually trust—this is where she would get lunch. The coffee is well-made (as are the homemade and locally-sourced pastries and vegetarian entrées) and served on adorable marbled dining-ware in a Riviera-does-Brooklyn style interior.

Between the hotel strip and Le Suquet is this loft-like wine bar that’s a welcome respite from the glitzy nightclubs and exclusive beach parties on Le Croisette (the main beach drag in Cannes). Wear a baseball cap in the dim lighting and pretend like you’re trying to not be recognized.

I wouldn’t put it past a Hollywood starlet to enjoy a little camp. Charley’s Bar in Le Suquet, with its glitter toilet seats, disco balls, and good-beat dance music, is the perfect spot. There are plenty of standard nightclubs in which you can blow €30 on a single cocktail, but my feeling is that this is the kind of place that Grace Kelly’s character’s mother in To Catch a Thief, who was the epitome of American nouveau-riche and refused to drink anything but Kentucky Bourbon on the French Riviera, would have loved. Nestled on a cozy side street with outdoor lounging, order your favorite well drink and post up for great people watching. 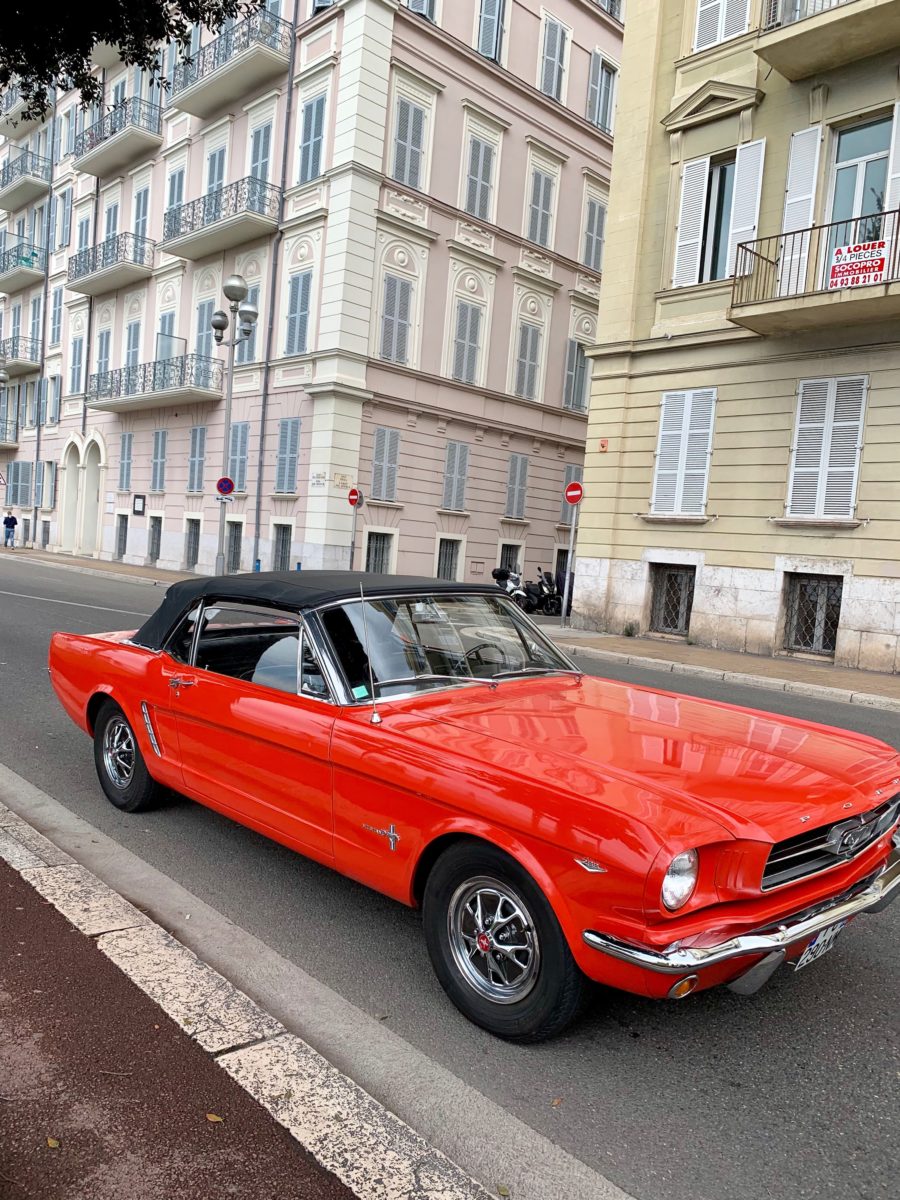 Made famous by Kelly’s To Catch a Thief car chase scene, it wouldn’t be a trip to the Riviera without riding (or driving) a classic car. When you’ve had enough of (relatively) provincial Cannes, take this as your ride north where the principality awaits.

The car ride to from Cannes to the rich life in Monaco takes about an hour, and there are plenty of places to stop for photo opps along the way—a particularly good cove is off Villefranche-sur-Mer, where Madonna has a home. Stop in Eze for lunch at Le Mas Provencal, an eclectically romantic (literal) treehouse of a restaurant unlike any other dining experience in the French Riviera.

There’s no other accommodation more fit for royalty than Monaco’s first hotel. Built in 1864 with opulent belle epoque architecture, Hotel de Paris is centrally located and boasts one of the best spas in the region, with gorgeous pool views and cryotherapy treatment to cure any lingering travel fatigue. For dinner, get a reservation at Alain Decasse’s Le Louis XV, which I can only describe as “extremely Versaille.” Pop over to Le Bar Américain after to rub elbows with Russian heiresses over a nightcap.

If you like your lunch with some heavy mid-century glamour, this eclectic new spot in Monte-Carlo will have you blending in with Monaco’s in-crowd in no time. Also great for pre-dinner drinks and snacks. 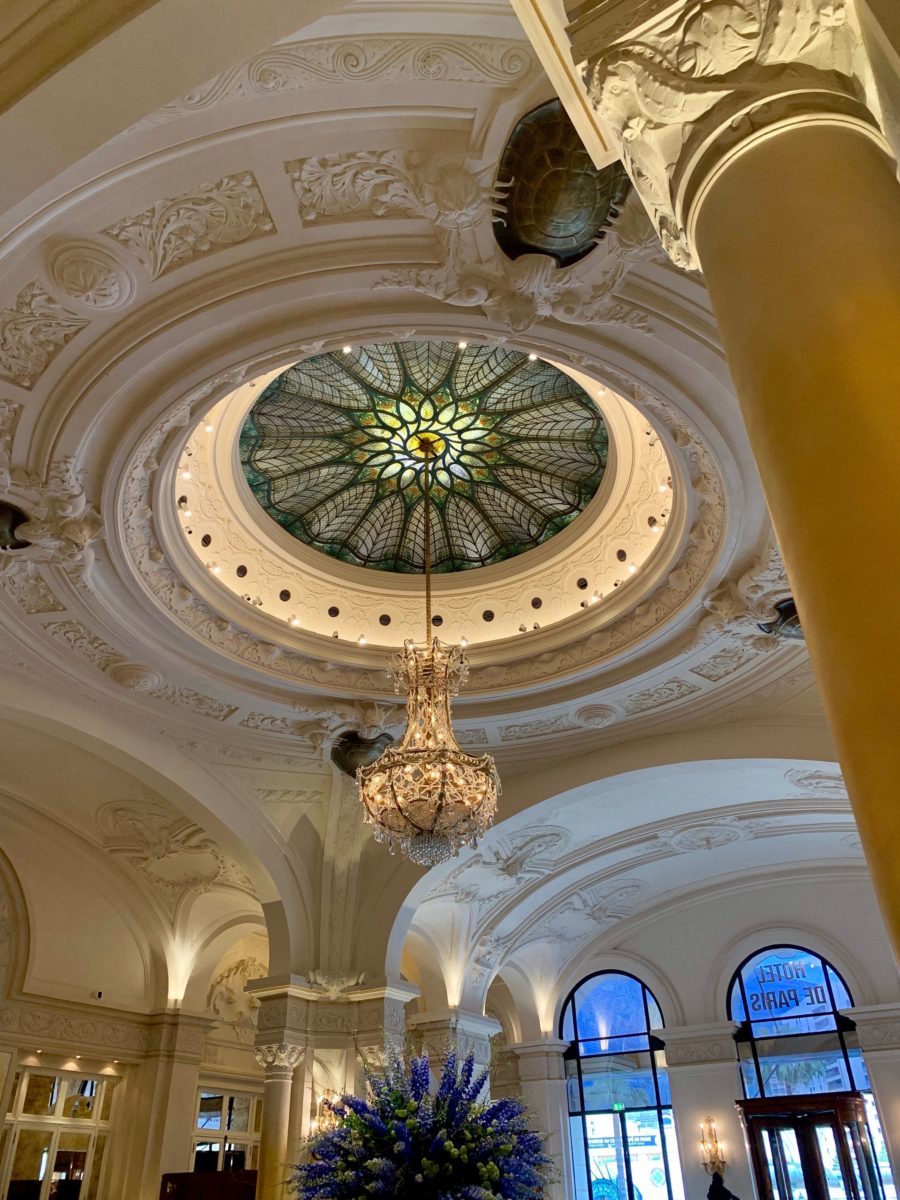 The lobby of the Hotel de Paris in Monaco.

Climb the steps up to Monaco’s old town and the city of the Prince’s Palace, where Grace Kelly lived. The structure, which was originally built in 1191, is almost shockingly upkept. The hill on which it sits boasts one of the best views in all of Europe—where three countries (Monaco, France, and Italy) are all visible. Take your postcard photos and then stroll around the old town streets.

Once you make your way up the Place du Palais, search the old town for a small, sequestered library and culture center housing one of the greatest—but least known—collections of Irish literature in the world. The Princess of Monaco was proud of her Irish heritage and acquired original and early works by Joyce, Yeats, and more. There’s even a copy of the Book of Kells. Kids can enjoy a children’s literature collection as well.

Though other gardens in the principality boast sweeping city and Mediterranean views, go to the Princess Grace Rose Garden for an elegant, intimate experience. Though don’t be fooled by the intimacy—the combined Fontvieille Park gardens make up over four acres of land, complete with sculptures and winding paths.

Though Princess Grace’s acting career only spanned about five years, her impact on the industry is lasting; thus, it would be a shame to complete a Grace Kelly-inspired French Riviera trip without making a cinematic pilgrimages to one of Monaco’s two main theaters, both of which are special in their own right. Monaco Open Air Cinema is an outdoor theater right on the edge of a waterside cliff with summer programming. Or, the Cinema des Beaux-Arts is a gorgeous two-screen theater that was designed by Princess Grace herself.

Grace Kelly and Prince Rainier III went on a nautical Mediterranian honeymoon after their wedding in 1956, and exploring the French Riviera by boat is still one of the best ways to experience it. Close out your Cote d’Azur vacation with a sunset boat ride with a skipper (or rent one yourself).