On Faroe Islands, Native Entrepreneurs Stick Around After Decades of Population Decline

While the Faroe Islands become a rising travel destination, three native Faroese entrepreneurs share why the islands are a great place to set down roots.

Such was the response I heard most when I told friends I was planning a trip to the Faroe Islands this past summer. The self-governing, 18-island archipelago is part of the Kingdom of Denmark and sits in the northern Atlantic halfway between Scotland and Iceland—in other words, not exactly a high-trafficked locale.

Famed for dramatic landscapes, picturesque turf houses, and puffin sightings, the Faroe Islands have grown in popularity as a featured destination across travel guides and social media. With increasing flight options and a recent campaign to bring Google maps to the islands on the backs of sheep, awareness and accessibility to the islands continues to grow in spite of its remoteness.

But new enthusiasm for the islands isn’t limited to tourists. Until recently, younger generations of native Faorese largely moved away for education and job opportunities, and while population decline is a regular trend for rural and remote areas around the world, the Faroese seem to have broken the cycle of decline, reaching a record high population of 51,000 in 2018. 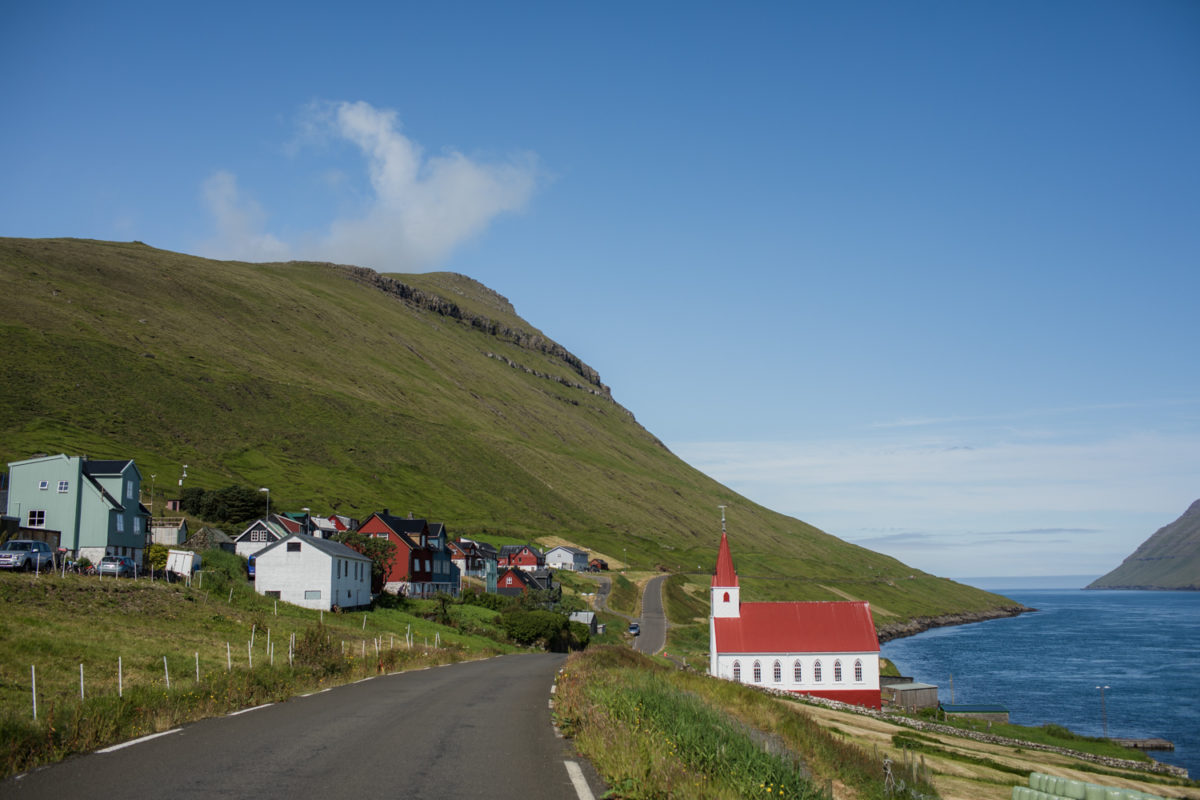 The village of Húsar on the Faroe Island of Kalsoy.

Part of this change can be attributed to the local university offering more courses, as well as other government resources like job placement and equal employment opportunity that make it easier for young folks to stay in the Faroes. And as tourism continues to grow and more job opportunities arise, young Faroese have begun to stick around or even move back to the islands in the past three to five years.

But who are these young Faroese setting down roots on the islands?

We spoke with three creative entrepreneurs who are native to and currently living on the Faroe Islands about their experiences, and what–unlike prior generations–has kept them here. 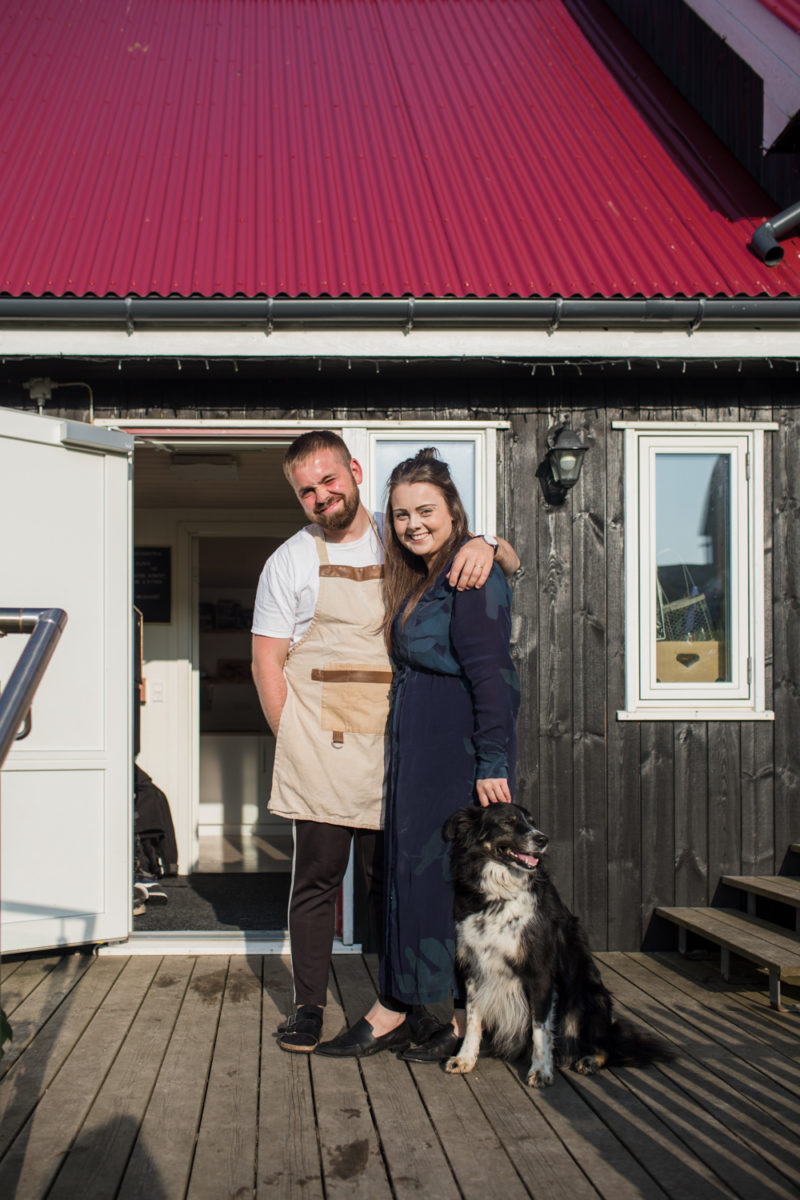 Harriet and her husband, John, stand outside their home, Hanusarstova, before hosting a heimablídni– a dinner where local Faroese invite visitors into their homes for a multi-course home-cooked meal. 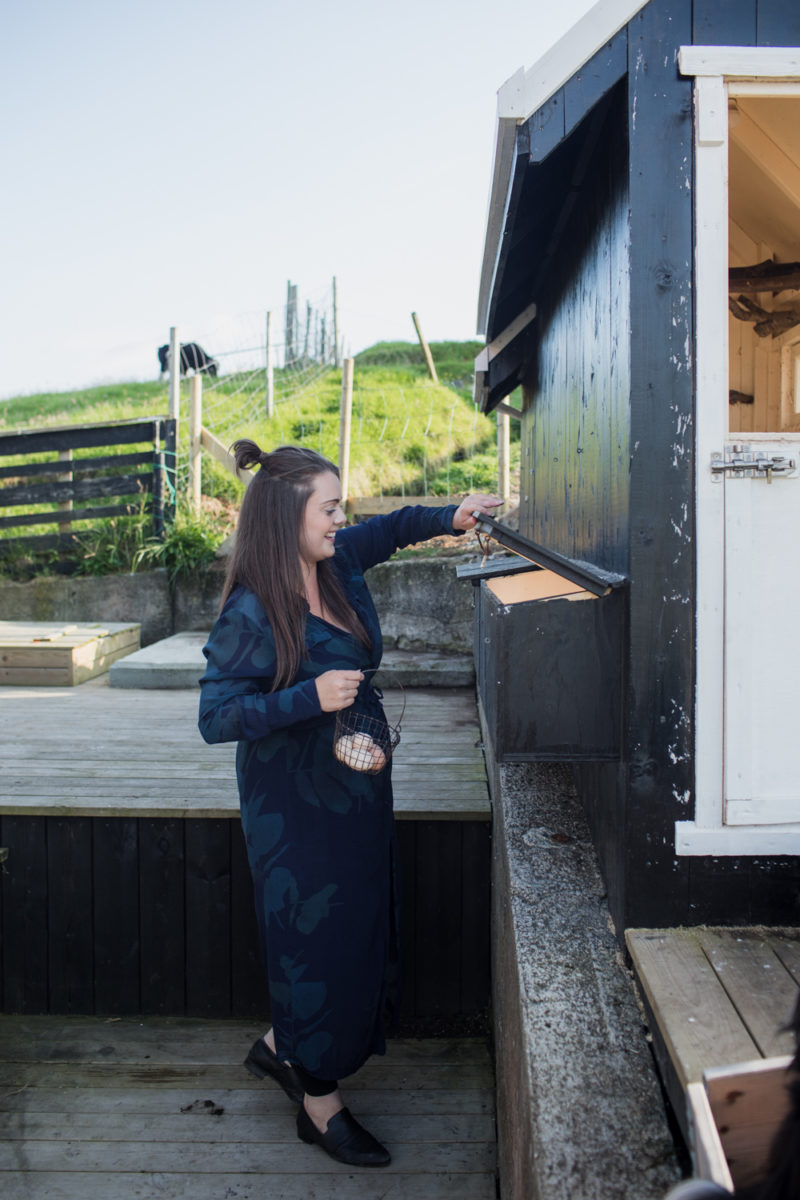 “When I was younger, I always said that I would move out of Æðuvík and never come back,” said Harriet, a true millennial entrepreneur juggling photography, sheep farming, social media managing, and the recent renovation of the 121 year old house she and her husband, John, bought six years ago in—yep, you guessed it—Æðuvík, on the island of Eysturoy.

After moving to the Faroe capital of Torshavn for seven years, taking extended trips away from the islands, and immersing herself into the bustle of city living, Harriet began to miss the peace, nature, and freedom of her countryside upbringing.

“For me, it’s all about being close to the family, and having the freedom to be creative on my own terms.”

Her chance to move back home came with a stroke of luck when her grandfather jokingly suggested she buy the house next door to him, which had been vacant for years, below market value.

“I thought ‘Why not?’” she said. “Little did I know that it would be the best decision of my life! Now I live and breath for this place—together with my husband, we have built a lifestyle inspired by creativity and passion.” 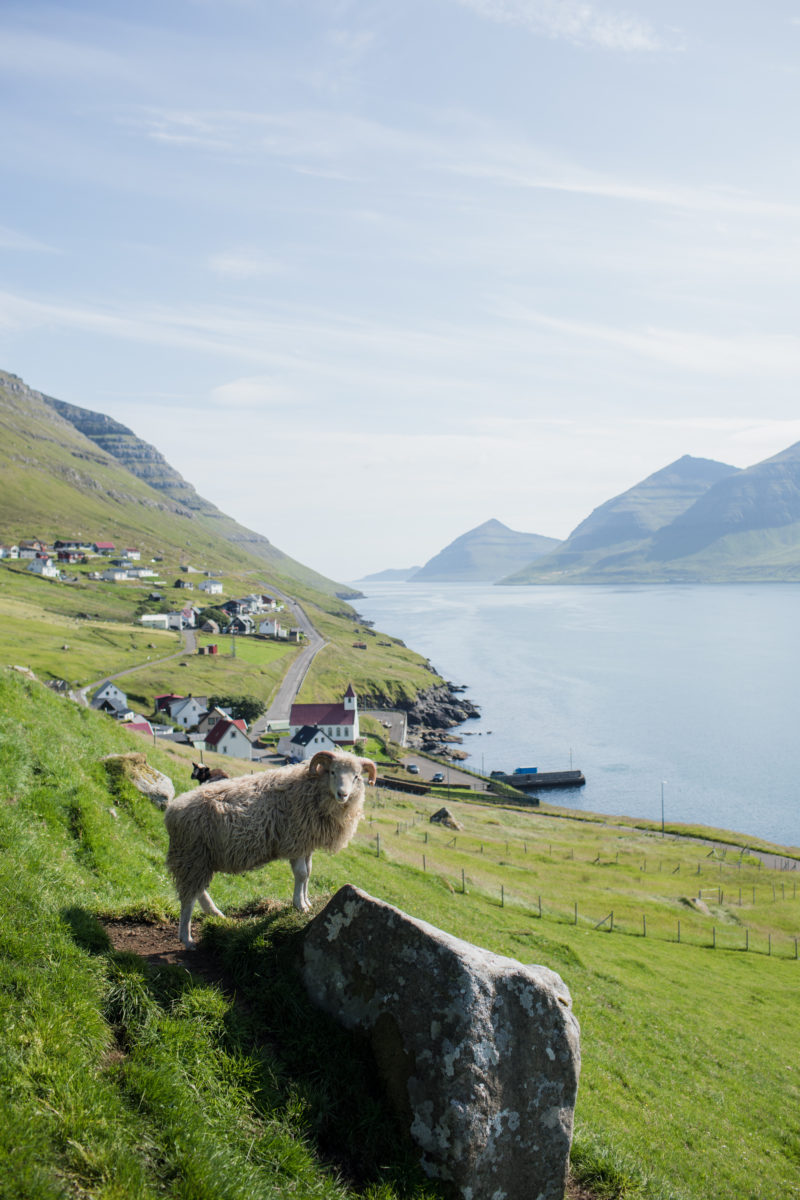 A sheep stands perched on a rock overlooking the village Kunoy on the island of Kunoy.

After a year of renovation and plenty of help from work exchange volunteers, Harriet and her husband now live and work on Hanusarstova, their mixed-use sheep farm and inn, where visitors can experience the Faroe Islands like a local.

“We’re focusing more on creativity and entrepreneurship,” says Harriet, having created a life she’d never thought possible as a young girl in Æðuvík.

“‘Back to basics,’ as we like to call it, has become popular somehow. Living off the land, buying local, organic farming, animal welfare, and simple living are now part of the norm—but looking back just one or two generations, things were very different,” adds Harriet. “For me to be able to photograph my sheep as art was pretty crazy when I started a few years ago. Society changes and people have become more open minded. The fact that creativity can be a job and way of life, that definitely plays a huge role in me living here.” 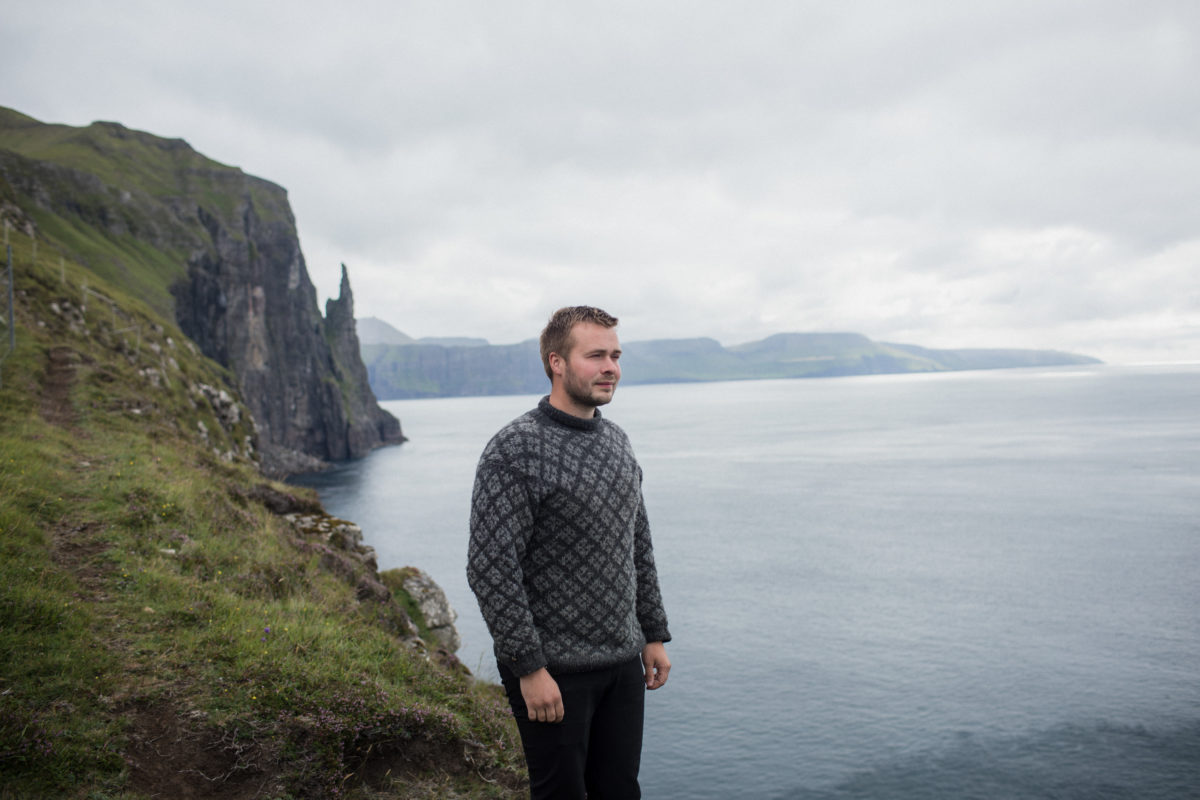 Jóhannus Hansen, owner of Reika Adventures, stands with the Witch's Finger behind him on the island of Vágar.

Jóhannus Hansen grew up on the westerly island of Vágar in the Faroes, spending most of his childhood outdoors playing, hiking, and helping with the flock of sheep his family shared with ten other families. After 10th grade, while most of his classmates left for college, he went to work in a shipyard on the Faroe capital of Torshavn.

Although his time away from Vágar was only on a neighboring island, he found that the density of the capital city wasn’t the right fit. He craved the peace and comfort of his home island. “When I travel, I always miss the food and the nature. I can’t even stand being in Copenhagen for more than three days. Here, I can do whatever I want, whenever I want. If I want to visit a friend, I don’t even have to call them.” 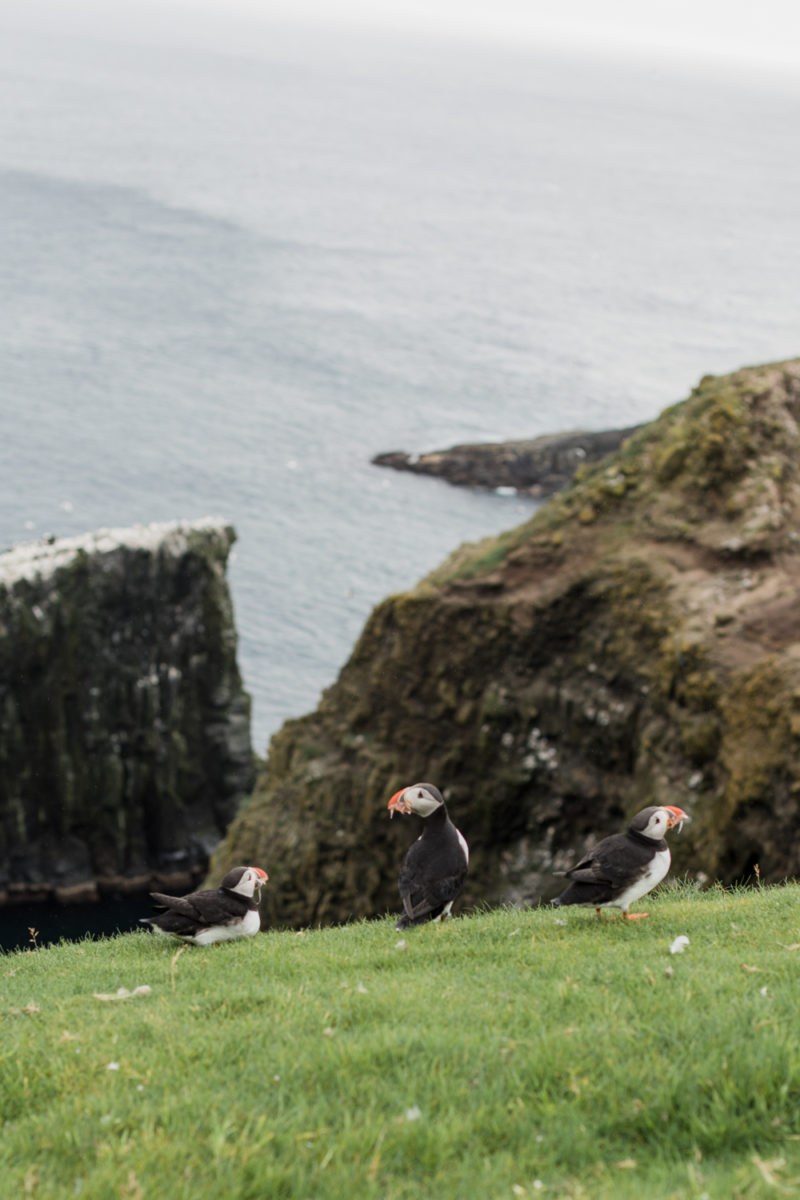 Puffins eat herring while perched on a cliff on the island of Mykines, the western-most island of the Faroes. 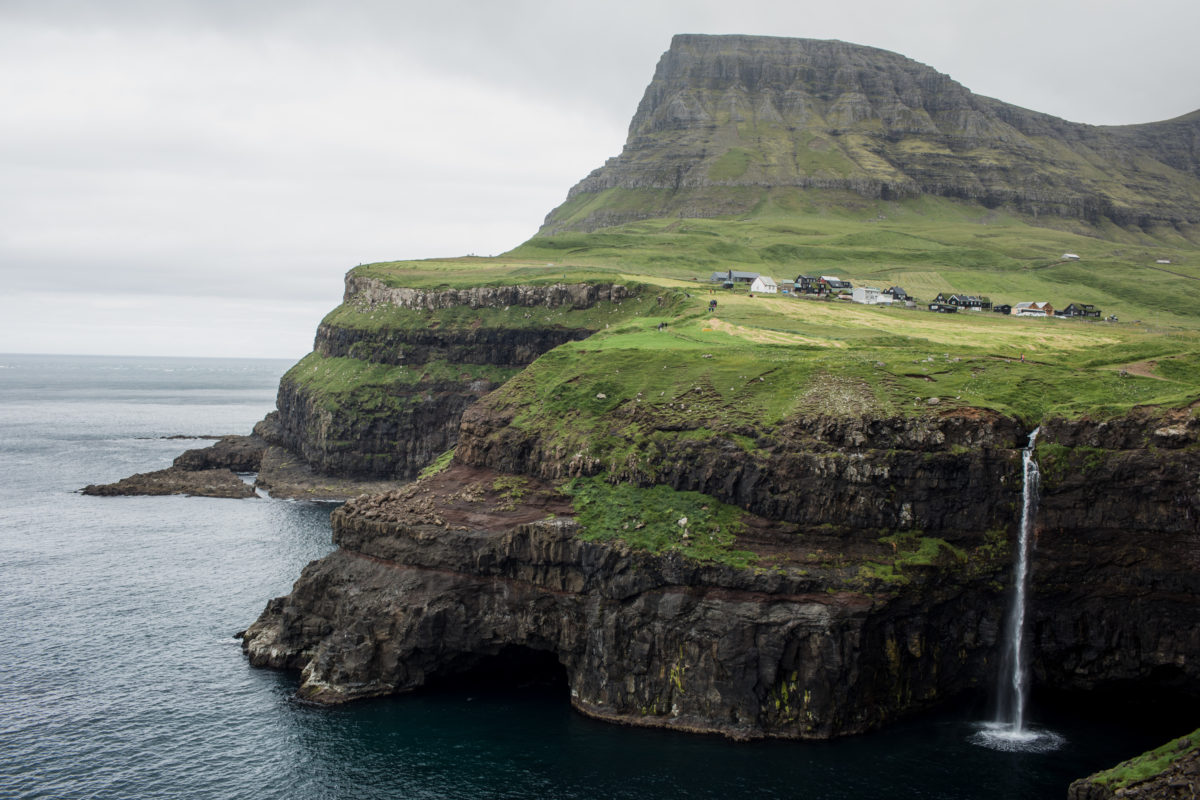 The iconic Gásadalur, a village located on the west side of Vágar. 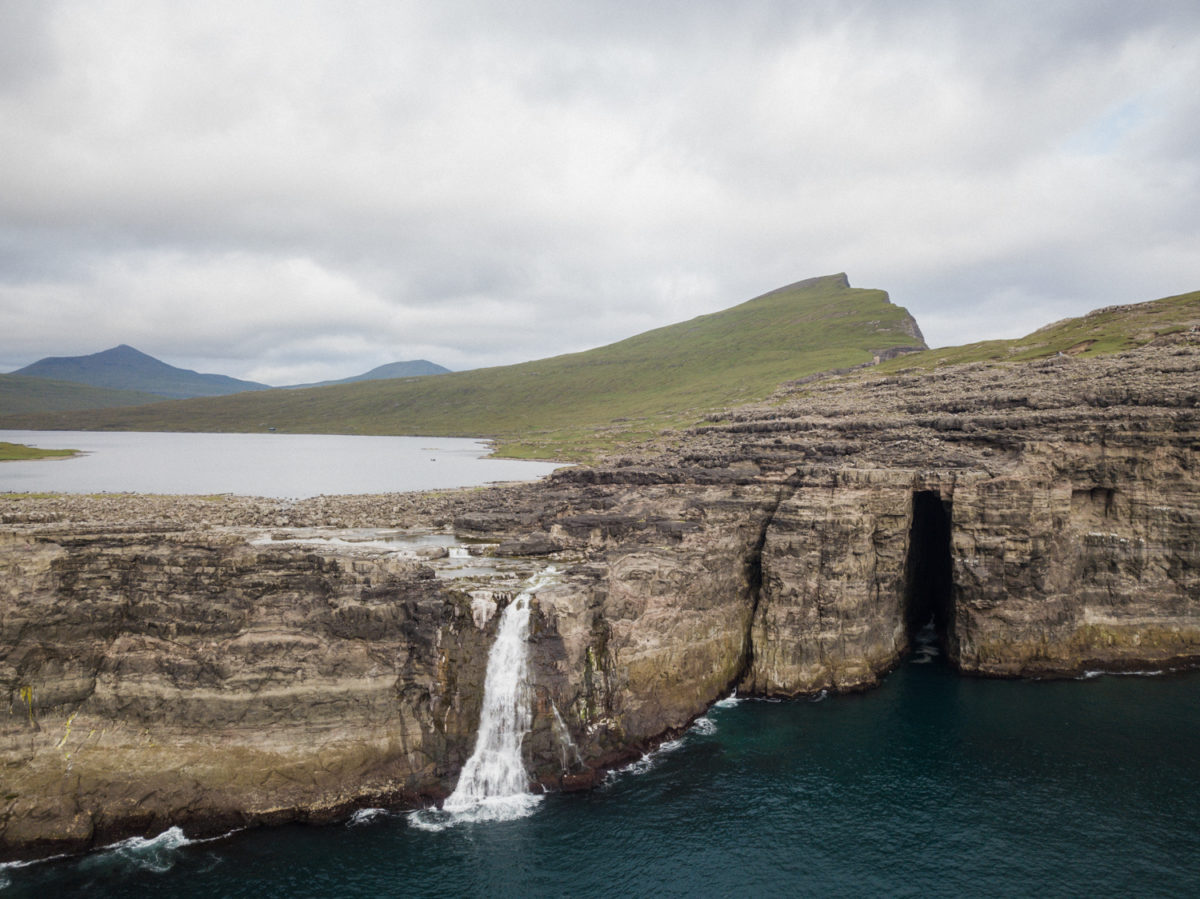 Hansen founded Reika Adventures in 2016, hosting local hikes and excursions on Vágar, making a business of sharing his home with visitors, hosting tourists and media like National Geographic and BBC. With the increase of visitors in recent years, guiding tours with Reika allows him to share the Faroes’ stunning landscapes and nature in a way that is sustainable and responsible.

“I’ve never traveled as little as right now, but I’ve never met so many people.”

He hosts tours across both private and public land, but has agreements with all of the landowners. In the future, he hopes to see more hiking infrastructure for visitors, including “clearer paths for more tourists to take the pressure off nature and people won’t wander all over. The most stable economy we can have is from tourism.” 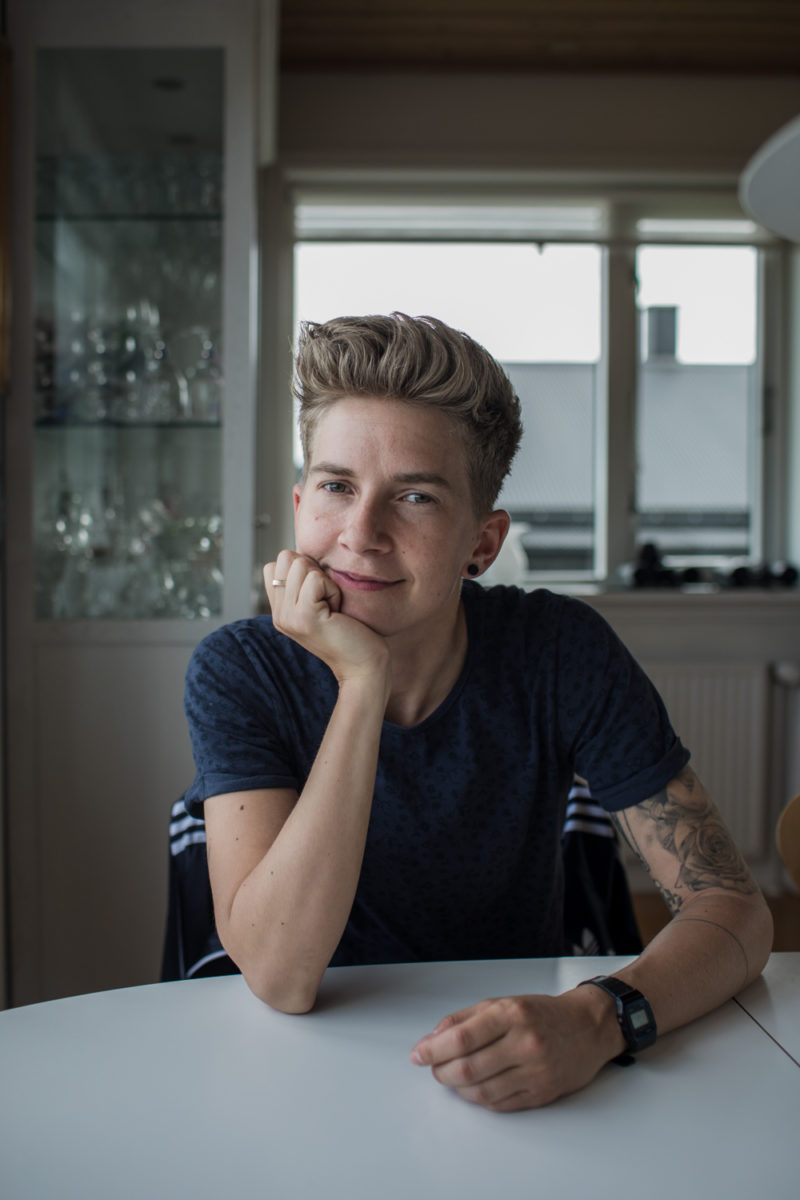 Surfer Katrin in her parents' home in Torshavn.

Like most Faroese adolescents of her time, Katrin imagined moving away as soon as she got older. She got her first taste of life on the outside during a study abroad exchange to the United States from 2007-2008. While she was glad to get away at first, she says, “leaving was an eye opener. I had thoughts and dreams of living in America, but it actually made me appreciate what we have more.”

Although Katrin was happy to be back after her year away, she saw that there were changes that needed to be made locally. “I was in my early 20’s and was like, ‘Okay, I want to make a difference,’” she said. “We started the LGBTQ+ Faroe Islands society. We worked for our rights and changed so much, and I believe that’s one reason why it’s cool coming back now—the Faroe Islands have become not-so-conservative, more open.”

The Faroese Parliament legalized same-sex marriage in 2016, though their government is still considered relatively less liberal compared to other Nordic countries. 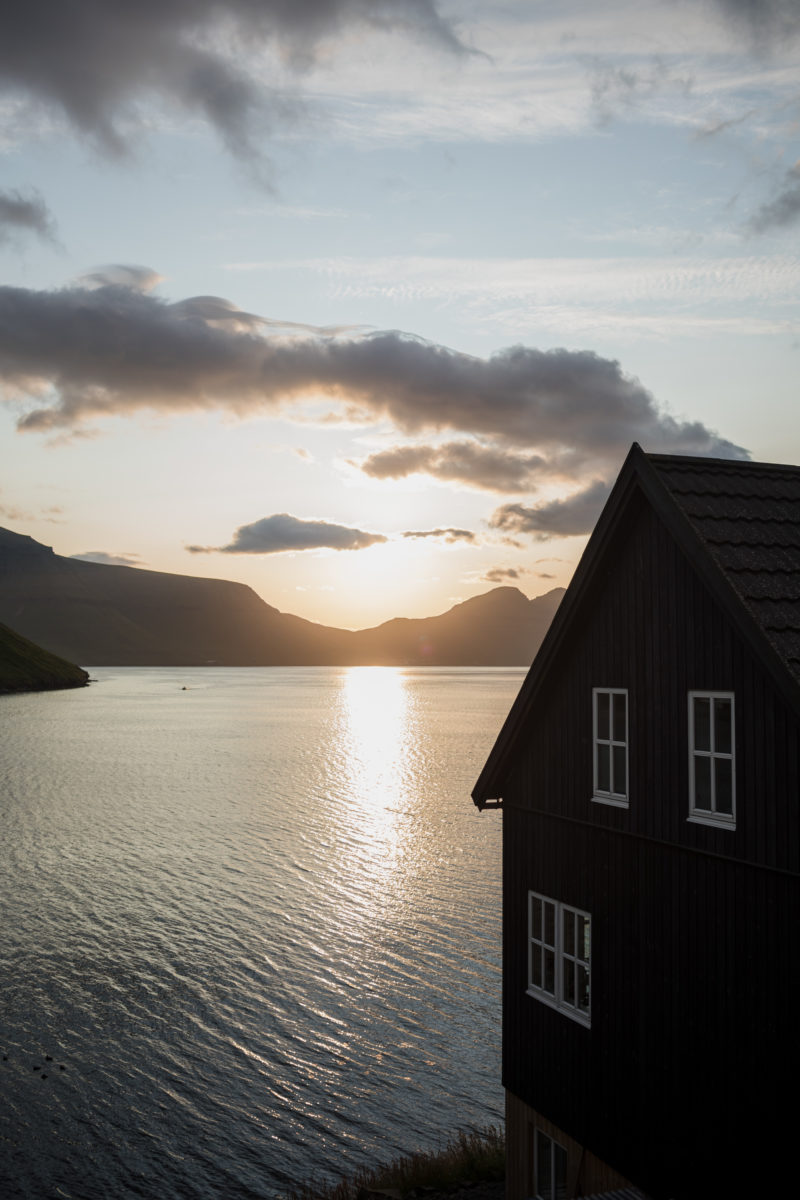 The sunsets behind a home in Klaksvík with a view of Kunoy across the water. 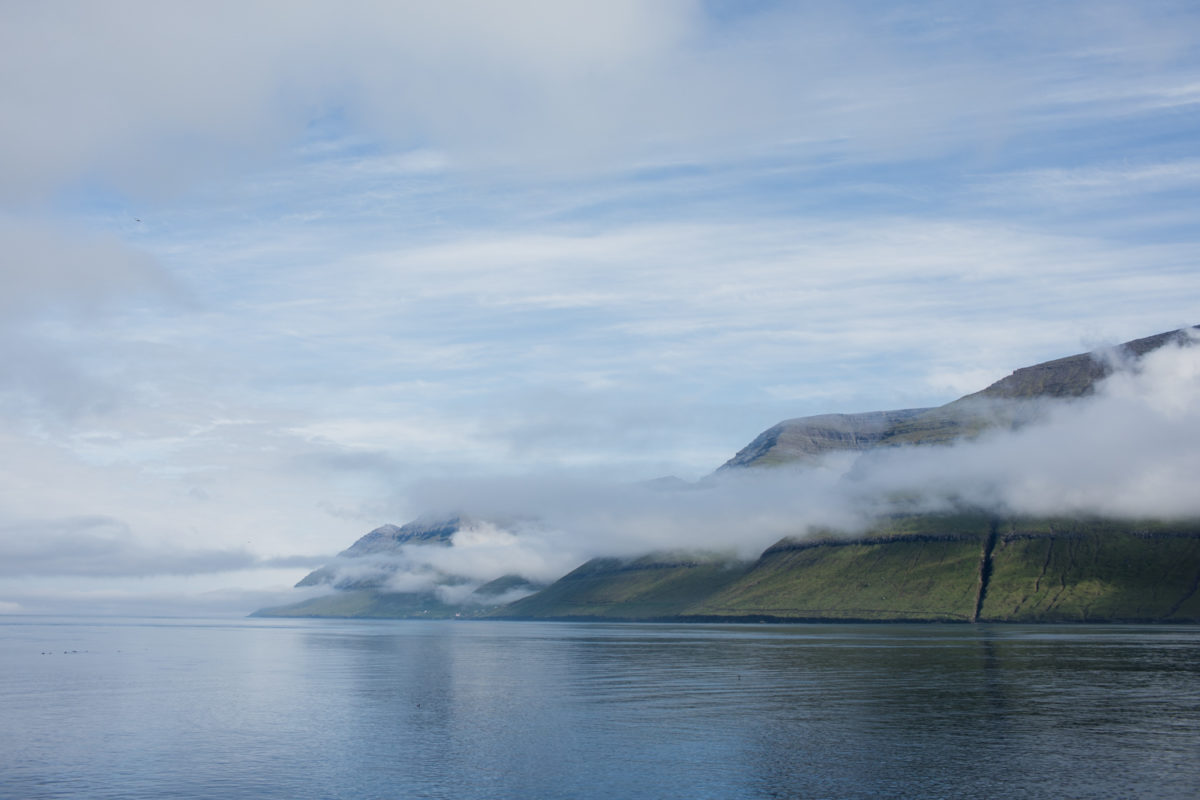 The view of Kunoy, as seen from Kalsoy after just getting off the ferry.

Along with her LGBTQ+ advocacy work, Katrin also missed surfing, which she first learned during her time in Santa Cruz, California. Upon her return, she went five years without surfing, spent a summer in Costa Rica to learn properly, and was determined to figure it out in the Faroes once she came back.

“I figured we have these great spots, we have the ocean, we have the storms, the swells coming in. I drove around really wanting to surf, then I figured I just have to try it to make it possible here. I bought some shitty gear, and me and another guy from Denmark started from scratch.”

“That’s why I felt like sticking around: I figured I’m not going to make a difference if I go.”

She now runs Faroe Islands Surf Guide, the islands’ unofficial host for any folks looking to surf. With the dangerous swells and likelihood of storms, Katrin’s organization welcomes anyone coming to surf and makes sure they’re safe while on the islands.

But for Katrin, being able to surf in her homeland fulfills her creative and adventurous inclinations. “It’s totally my kind of meditation. It’s so beautiful, so peaceful. It’s like time stands still.”

Unlike generations before her, instead of leaving to find the things she wanted, Katrin found a way to bring them back home. “It’s definitely special never having really left. I like being here, and I felt like I could make a difference,” she said. “If you want it—do it.”